One Saturday night, a student on the fourth floor of Parker Hall heard a man yelling at a woman. Despite the unknowns of the situation, he left the comforts of his bed, ventured outside, and broke up the argument.

Why was this student motivated to leave his room? How did he have the skills to intervene between two people he didn’t know? The answer: He is Green Dot–certified.

Geared toward students, Green Dot is a national bystander intervention program that seeks to prevent power-based violence. It was launched at Bates a year ago by Student Affairs staff member Blake Reilly and former staffer Qiu Fogarty. 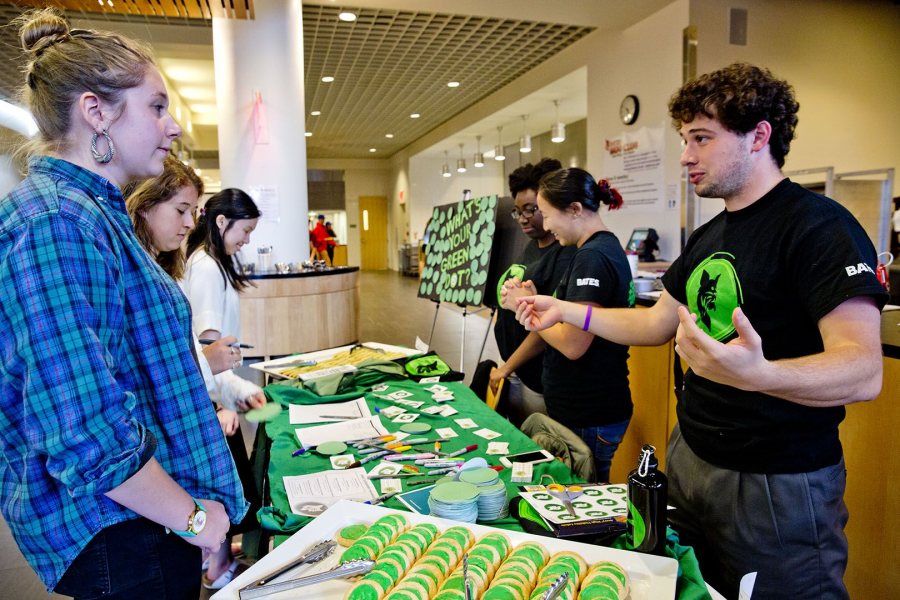 Assistant Director of Residence Life Blake Reilly, who has spearheaded the deployment of Green Dot at Bates, talks with students during a special Green Dot dinner held during the program’s launch in fall 2015.

Since then, 1,500 current Bates students have attended an overview workshop of about 90 minutes, and an additional 389 are Green Dot Grads who have completed a five-hour certification training session. In addition, 43 Green Dot Grads in the Class of 2016 have taken their training into the world with them.

Such strong participation reflects a core tenet of the program: It takes a large number of willing and able people to change behaviors. “It’s not one person doing one big thing. It’s a bunch of people doing small things that add up,” says Reilly, assistant director of residence life in Student Affairs.

Reilly has worked hard to grow the program, and the Bates community has been “enthusiastic,” he says. 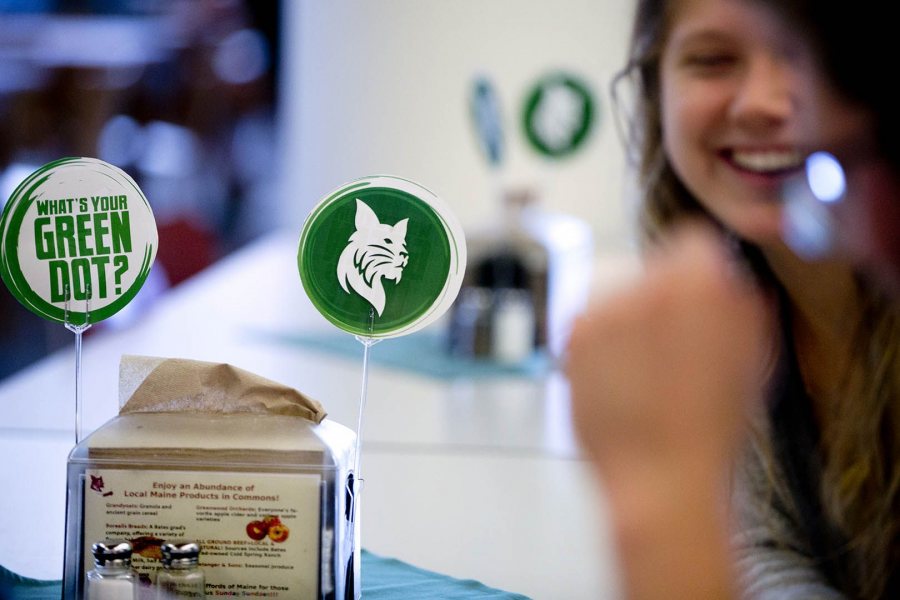 Growing both awareness and the number of trained participants are key elements of the Green Dot program. (Phyllis Graber Jensen/Bates College)

“Green Dot has taken off because it aligns so closely with Bates’ core values,” he says. “In our mission and in our community, those informal values that we have, where we are always looking out for another student or staff member, Green Dot just seamlessly fits right into there.”

Green Dot was founded 10 years ago at the University of Kentucky by Dorothy Edwards, a clinical psychologist, and Marigail Sexton, a communications professional, and is now used by more than 500 U.S. colleges and universities. And it’s not limited to colleges. Even the U.S. Air Force uses Green Dot.

Bates has been a particularly active Green Dot campus under Reilly’s leadership. On Sept. 18, Bates was one of 50 colleges that joined “Connecting the Dots,” a Green Dot day of action “that trained thousands of students at the same time on the same day,” he says.

So how did that student in Parker Hall know what to do? “Our goal is for students to leave their training feeling empowered to take initiative and be proactive,” says Reilly, one of eight faculty and staff who are Green Dot trainers. “One of the Green Dot cornerstones is that everyone in the community has a responsibility and the ability to prevent power-based personal violence.”

“In a situation where someone thought they couldn’t make a difference before, they now have the skills, tools, and power to act,” he adds. “They will also leave knowing that they now can be part of a cultural shift that changes norms so fewer of our friends, loved ones, and colleagues will be harmed.”

As the program’s name suggests, a green dot is a positive action that confronts a red dot, which is any sort of high-risk situation, whether an incident at a party where alcohol is present or a nasty text message sent to an ex.

A green dot can be reactive, like when the Parker student intervened in that argument, or proactive, when a student strikes up a conversation about power-based violence with a friend. The idea is to fill your community with green dots.

Students are the engine of this Bates vehicle for preventing power-based violence.

Green Dot participant James Karsten ’17 of East Grand Rapids, Mich., had been involved with ReMasc, a student organization that challenges traditional ideas about masculinity with a goal of ending sexual violence on college campuses.

“I have internalized the fundamental principles of the training in such a way that I feel enabled and equipped to be an effective bystander during social events here on campus,” Karsten says, who was one of three leaders of the 2016 edition of AESOP, the college’s outdoor program during Orientation. 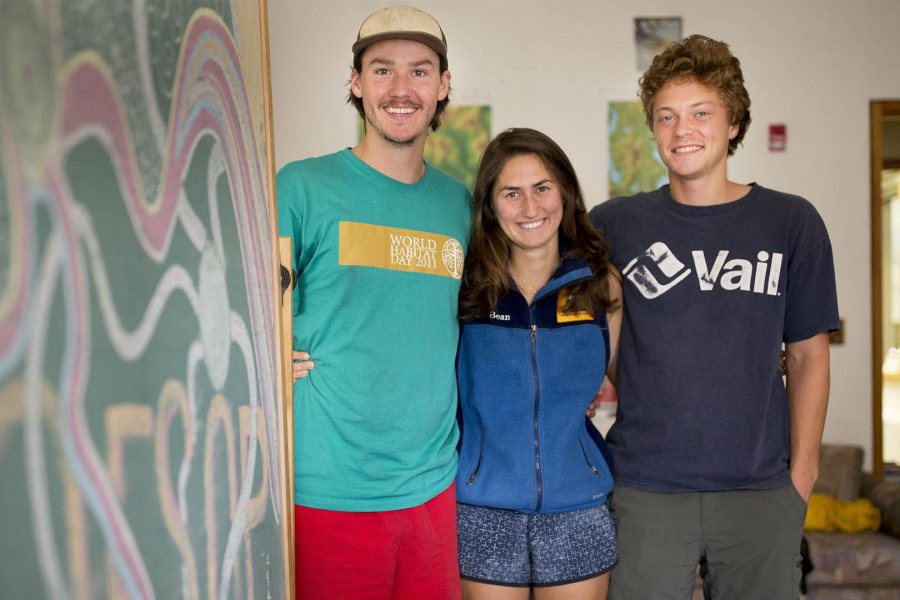 Helene Sudac ’19 of Lake Forest, Ill., is another of the 389 Green Dot grads. Now a Green Dot steering committee member, she values the program’s effectiveness in raising awareness about power-based violence.

“Any type of prevention for power-based violence is important, especially on a college campus where [power-based violence] is unfortunately more common than we know or is reported,” says Sudac, who is a member of the Student Life staff as a junior advisor in Rand Hall.

Reilly and his Green Dot committee teamed up with Associate Professor of Sociology Heidi Taylor’s research methods class and found that students who attended the five-hour training were 50 percent more likely than untrained students to perform a proactive green dot. 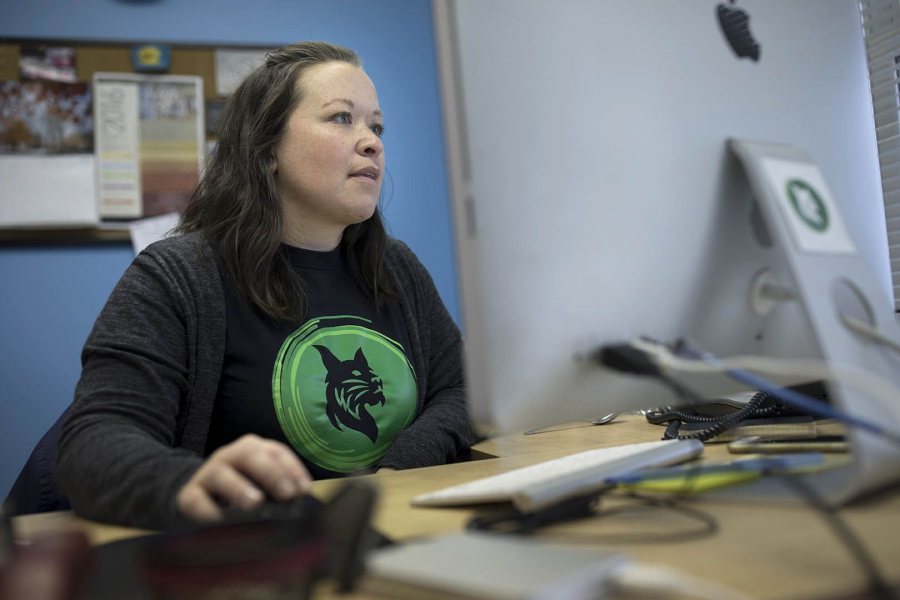 Leanne Ouimet of the Bates Communications Office is among more than 560 faculty and staff who have received some sort of Green Dot training. (Phyllis Graber Jensen/Bates College)

“We also found that the certified students were 10 percent more likely to intervene when they witnessed a red dot than those who had only attended an overview,” Reilly says.

A member of the Bates Communications staff, Leanne Ouimet is a Green Dot Grad who hires and helps to supervise the BCO student workers. She sought out Green Dot training because “I want to support our students, whether they work here for a semester or for four years,” she says.

“If they reach out to me, I want to be prepared to help.”

“One in four women and one in six men will be survivors of sexual assault in their lives. That’s a really high number of people getting hurt,” Reilly says. “And whether it’s purposeful or inadvertent, we as a society have been maintaining these high rates of violence.

“So let’s all get involved to bring these rates of violence down.”

Arriving Monday, the Bates Class of 2023 steps into a ‘world of new connections’