The syndrome has profound impacts on intellectual development and cognition, mobility, breathing, digestion and other functions. Notably, it affects communication: Most people with Pitt Hopkins are unable to use language, even sign language.

In recent years, a handful of researchers have made great strides in understanding Pitt Hopkins. And one of them teaches at Bates.

Assistant Professor of Chemistry Andrew Kennedy, who joined the Bates faculty in August, is among the disorder’s first and leading researchers. And the work that he’s doing with his Bates students may be bringing a therapeutic approach to Pitt Hopkins within reach.

Pitt Hopkins is extremely rare. Fewer than 600 cases have been diagnosed worldwide. Until this decade, Pitt Hopkins research was minimal, although its genetic connection was discovered in 2007.

Kennedy’s Pitt Hopkins research is a facet of his broader investigation into how cognition, specifically memory formation, is affected by so-called epigenetic factors — biochemical mechanisms that control how genes are organized.

“I don’t know what it’s like caring for someone with a developmental disability, but I imagine it requires hope,” he says. “Hope includes uncertainty, and it requires investigation and effort, probably setbacks and imperfect outcomes. But at the core there has to be hope.”

Kennedy’s research has attracted about $427,000 in grant support to Bates in all. His broader investigation is being funded by a $339,300, three-year grant from the INBRE Investigator program, part of the Maine INBRE award from the National Institutes of Health, administered by the Mount Desert Island Biological Laboratory.

That investigation is focusing on ways that, in non-diseased brains, a process called DNA methylation affects long-term memory formation.

In addition, Bates has received $88,000 from the Pitt Hopkins Research Foundation, a volunteer nonprofit established by families of children with the disorder, to support Kennedy’s Pitt Hopkins–specific research.

“Pitt Hopkins syndrome, although rare, is a ruinous disease,” says Matt Auer, vice president of academic affairs and dean of the Bates faculty. “When Andrew applied for the Bates chemistry appointment, his postdoctoral research on DNA methylation and its impact on long-term memory formation got the attention of my colleagues in chemistry and neuroscience.

“We were thrilled when Andrew accepted our offer to join Bates. After just one semester, he is emerging as a key interdisciplinary bridge-builder in the sciences at the college.”

Founded in 2012, the Pitt-Hopkins Research Foundation essentially inaugurated Pitt Hopkins research when it reached out to J. David Sweatt, a neurobiologist then at the University of Alabama at Birmingham.

“After just one semester, Andrew is emerging as a key interdisciplinary bridge-builder in the sciences at the college.”

The first molecular neurobiologist in the U.S. to investigate the disorder, Sweatt hired Kennedy as a postdoctoral research associate in 2012, and the pair went on to create the first mouse model of Pitt Hopkins — a fundamental advance, as it gave them and other scientists a basis for further study of the disorder.

With the team of Sweatt and Kennedy, “we got really, really lucky,” says Audrey Davidow Lapidus, foundation president. “It was like hitting the jackpot twice. The two of them really spearheaded some amazing research.” (Sweatt now chairs the pharmacology department at the Vanderbilt University School of Medicine.)

Lapidus and her husband, Eric Lapidus, are the parents of Calvin, who was diagnosed with Pitt Hopkins at 13 months and is now 5 years old. “He has profound developmental delays,” his mother says. “He still cannot walk. He likely will never talk. Some of the other kids with this disorder have severe seizures and breathing episodes, like apneas and hyperventilation.”

The failure of a single gene — TCF4 on chromosome 18 — is the root cause of Pitt-Hopkins, but that failure has a ripple effect. Because TCF4 produces a protein that helps other genes to be read, “it’s a compounding problem,” says Kennedy. “It’s not just one gene not working, it’s a whole family of genes that TCF4 controls not working correctly.” 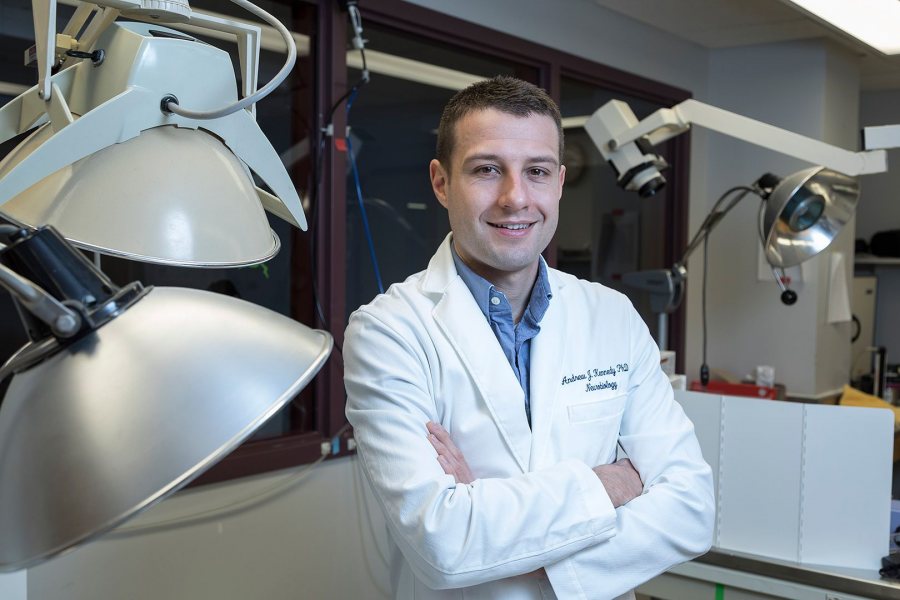 Sweatt and Kennedy capitalized on the fact that there are drugs that “affect gene expression in kind of a wholesale way, called epigenetic modifiers,” says Kennedy. He works specifically with a category of modifiers called histone deacetylase inhibitors, or HDAC inhibitors.

They correlated genes known to be affected by HDAC inhibitors with the genes involved with Pitt Hopkins. One drug in particular emerged from this detective work: Vorinostat, marketed as a cancer treatment under the brand name Zolinza.

“We treated the Pitt Hopkins mice with the drug, and it profoundly improved their capability of learning and remembering,” Kennedy says.

“And this went across every type of behavior that we looked at, whether it be maze-solving, object association, or even object location memory.”

It was an electrifying discovery — all the more so because Vorinostat has already been approved by the U.S. Food and Drug Administration, albeit for a different use. “So there’s a possibility that we can now look at this in a clinically controlled trial setting,” hopefully within five years, says Kennedy.

“Single-gene disorders are a sort of Rosetta Stone for figuring out larger issues like autism, Alzheimer’s, and schizophrenia.”

At Bates, Kennedy’s PHRF-funded work will pursue the Vorinostat angle from two directions. First, he and his students will continue to scrutinize specific genes affected by Vorinostat. Second, they will investigate the potential of other FDA-approved HDAC inhibitors for treating Pitt Hopkins.

Moreover, the INBRE-funded study will have a bearing on the Pitt Hopkins work. HDAC inhibitors require ongoing use to be effective, but therapies that target DNA modification, specifically DNA methylation patterns, may have longer-lasting effects on cognition.

What are the students in Kennedy’s charge doing? “They’re going to be trying different therapies on mice, and then giving them tasks to learn and seeing if they do any better than control mice. This is all based on the hypothesis that the epigenome [the complex of chemical compounds that can control the genome] can be targeted to improve learning and memory.” 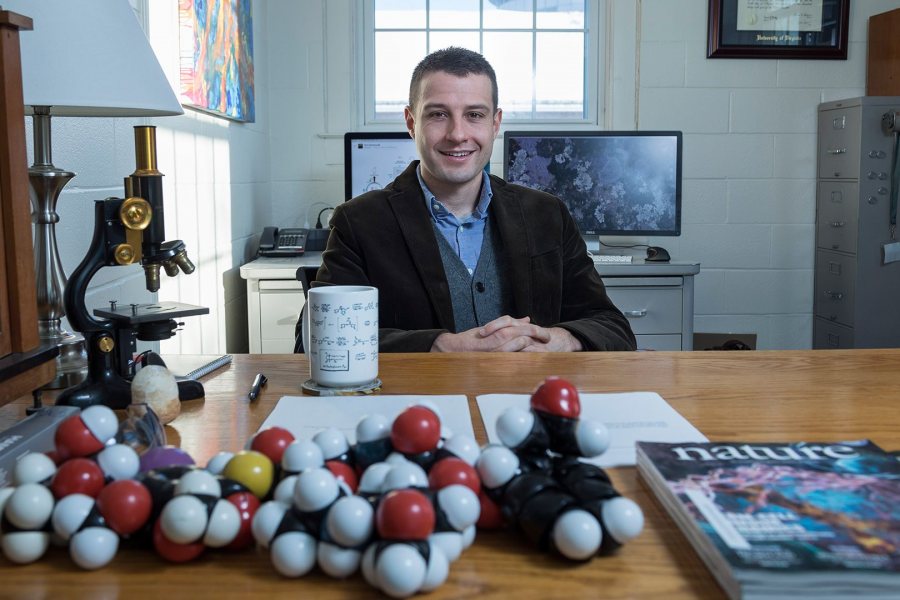 With a collection of model molecules in the foreground, Assistant Professor of Chemistry Andrew Kennedy is shown in his Dana Chemistry Hall office on Dec. 14, 2016. (Josh Kuckens/Bates College)

At the same time, genetic material from the treated mice will be sent away for sequencing. “We’ll be looking exactly at the changes in the genome that occur by going into the neurons and assessing what changed there.”

While the number of known Pitt Hopkins cases is only in the hundreds, the work being done by Kennedy and other scientists in the field reaches beyond that single disorder: a growing body of scientific evidence shows that single-gene disorders like Pitt Hopkins hold clues to understanding afflictions that are vastly more common.

“They hold so much promise for unlocking treatments for other cognitive disorders,” says Lapidus. “They are a sort of Rosetta Stone for figuring out larger issues like autism, Alzheimer’s, and schizophrenia.”

She points out that the initial PHRF grant to Sweatt’s lab at Alabama was followed in 2014 by a research grant of more than $1.8 million from the U.S. National Institute of Mental Health. “They recognize that this is really important, especially with regard to figuring out what we can do about autism.”

Researchers like Sweatt and Kennedy, she says, are “not just researching a rare disorder in some little bubble. This really does have larger ramifications.”

But it’s nevertheless true, as Kennedy points out, that researching an orphan disease “means there are fewer resources and less awareness. Tasks such as organizing a clinical trial, which require large numbers and control groups to be meaningful, can be daunting with such a small population.”

“It can also be hard on the parents that have to wait on the pace of scientific research,” he adds, “but it’s clear that the fact that research is occurring produces hope.”

Help! From textbooks and course registration to the campus shuttle

Help! From community engagement and tutoring to residence life