You hear it whenever world-class teammates — think Cousy and Russell, Brady and Edelman, even Babilonia and Gardner — talk about their success. Invariably, they’ll say it’s all about trust and respect.

That’s exactly how Bates’ latest world-class debate team, of Zoë Seaman-Grant ’17 and Matt Davis ’18, talk about a history-making performance that landed them in the final four of the World Universities Debating Championships in The Hague, Netherlands.

“We have enormous respect for each other intellectually. We trust the other person’s ideas,” says Davis, a philosophy major from Chicago. “And we’re very good friends.”

That friendship, says Seaman-Grant, a women and gender studies major from Charleston, S.C., “allows us to put so much faith and trust in each other during debates.” 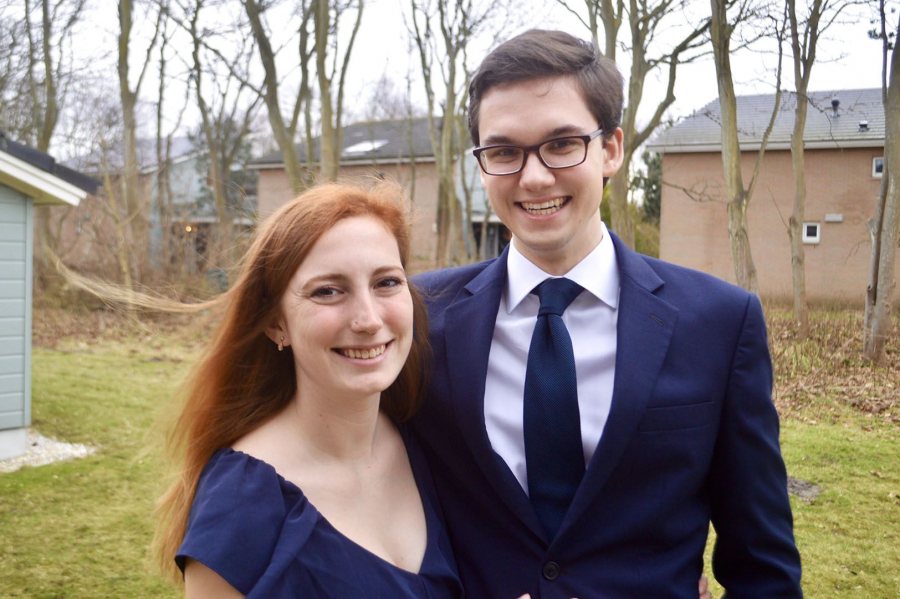 Debate partners Zoë Seaman-Grant ’17 and Matt Davis ’18 made it to the finals of the 2017 World Universities Debating Championships in The Hague, Netherlands.

Trust and respect, and of course profound intellectual chops and a dizzying knowledge of world affairs, fueled the pair’s run to the finals of the WUDC, which attracted teams from 379 institutions to The Hague Dec. 28 through Jan. 3.

“I’m so proud of Zoë and Matt,” said President Clayton Spencer. “They and their teammates are doing an amazing job, continuing Bates’ stellar tradition of success in international debate.”

About a century after Bates made history by becoming the first U.S. college to debate internationally, Bates is again is looming large in international debate competition. 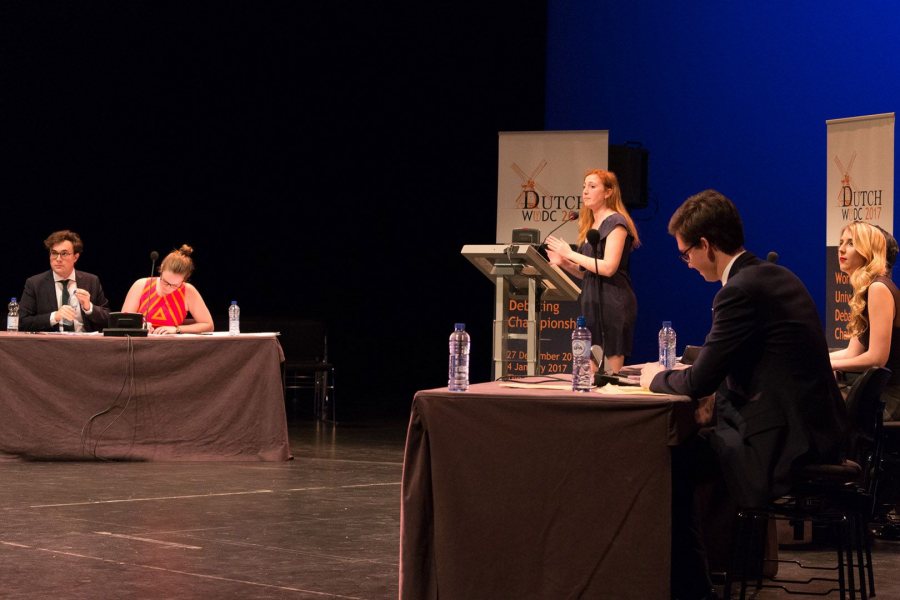 Zoë Seaman-Grant ’17 is at the lectern, while teammate Matt Davis ’18 takes notes, right, during the final round of the 2017 World Universities Debating Championships in The Hague, Netherlands. (Manuel J. Adams / Dutch WUDC 2017)

Since motions are announced just 15 minutes before a round, debaters must walk in already knowing a lot about a lot.

“Together, we very rarely get a topic we don’t know anything about,” says Davis. “Zoë knows quite a lot about feminism, race, and economics, while I know a lot about international relations, philosophy, and art.” 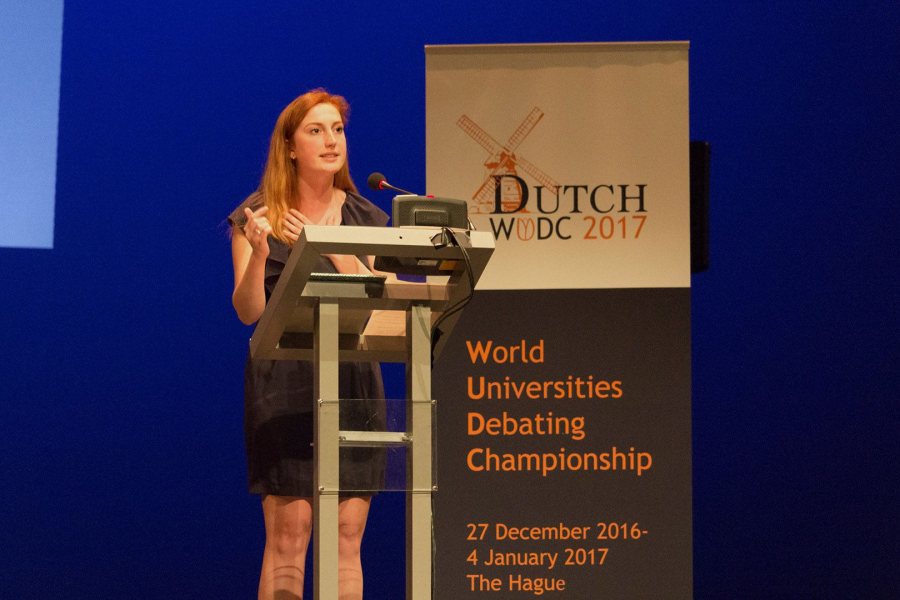 Zoë Seaman-Grant ’17 presents the Opposition case during the final round of the 2017 WUDC in The Hague, Netherlands, where the motion was “This House would apply universal jurisdiction to crimes against the environment.” (Manuel J. Adams / Dutch WUDC 2017)

As their knowledge becomes ideas that become arguments, the pair’s two minds work as one.

“We trust the other person’s ideas and also respect when the other person says we have a bad idea,” explains Davis. “This also means that we rarely disagree about what sorts of arguments to make or strategies to take, which means that if we mess up it’s never one person’s fault alone.”

About a century after Bates made history by becoming the first U.S. college to debate internationally, the college again is looming large in international debate competition.

And complementing trust and respect, says Director of Debate Jan Hovden, is “hard work and dedication. We have been working hard to improve our standing on the global level. Prior to 2013, Bates had had one team reach the elimination rounds at Worlds. Since 2013, we have had six. Matt and Zoë raised the bar — they’ve solidified Bates as an elite program.” 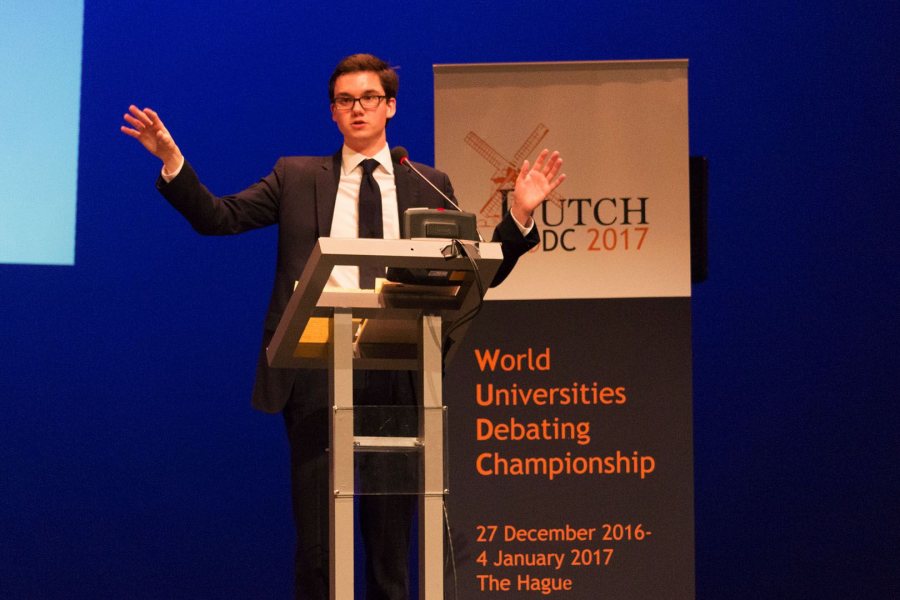 Matt Davis ’18 presents the Opposition case during the final round of the 2017 WUDC in The Hague, Netherlands, where the motion was “This House would apply universal jurisdiction to crimes against the environment.” (Dutch (Manuel J. Adams / Dutch WUDC 2017)

Then, in 2015, Taylor Blackburn ’15 and Matt Summers ’15 reached the octofinal round, aka Round of 32. Blackburn, in fact, was on hand in the Netherlands to witness Bates’ latest history-making performance, attending the WUDC as a judge.

“She and I had a very emotional moment” after Bates won its octofinal debate, said Seaman-Grant. “It was so wonderful to have her there, seeing Bates do even better than before.”

For Seaman-Grant, the other highlight was in the sixth of nine preliminary rounds when the topic was in her bailiwick: “This House believes that the world would be a better place if women from privileged backgrounds turned down any benefits arising from affirmative action programs.”

“We debated against teams from Oxford, Harvard, and Stanford,” she says. “All those teams are incredibly talented, and Matt and I managed to win. It was the first moment at worlds where I felt like we actually had a chance of performing well at the tournament.”

Here’s another quality that makes a great competitor: passion for what they do.

“Even when Matt and I aren’t winning, we have an incredibly fun time just talking to each other about ideas and watching each other give speeches,” Seaman-Grant says. 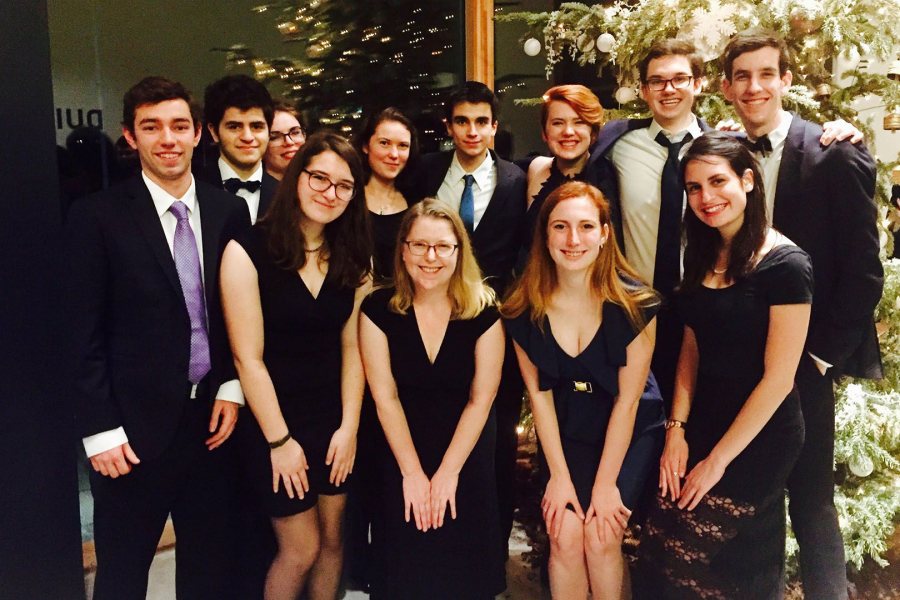 The Bates contingent poses for a photo during WUDC 2017, including Taylor Blackburn ’15 (back row, third from right) whose team advanced to the octofinal round in 2015. (Photograph courtesy of Tessa Holtzman ’17)

The World Universities Debating Championships use the British parliamentary format. Topics are announced 15 minutes before the debate begins and the rounds are contested by four teams: two supporting the proposition (Government) and two opposing (Opposition).

It’s faster-paced and more strategy-focused, and — hardly surprising since it’s the preferred format in international debating — Bates has increasingly focused on British-style debating in recent years.