WGME-TV’s Marissa Bodnar did an on-campus interview with Spencer, who told the reporter that in “higher education in particular, knowledge knows no boundaries. Higher education is inherently international, and higher education has been what has fueled our innovation economy.”

As most did, the Lewiston Sun Journal quoted the second sentence of statement: “I am appalled by the executive order and the inhumane manner in which it is being implemented. The order is antithetical to American values and the principles on which Bates was founded and continues to stand.”

On the eve of Martin Luther King Jr. Day, two Maine media outlets, WCSH-TV and The Boothbay Register, shared recollections from John Jenkins ’74 about meeting King in Newark, N.J., in 1968, just a week before King’s assassination.

“It’s one of those things that doesn’t leave you,” Jenkins told WCSH-TV’s Cindy Williams.


As president of the South Side High School student council, Jenkins introduced King when he spoke. Jenkins recalled that he and fellow students didn’t embrace King’s message of nonviolence. King was saying to “turn the other cheek,” Jenkins recalled. “I’d say, ‘You hit me in the cheek, and it’s on.'”

The chant in the streets of Northern cities was “burn, baby, burn.” Jenkins said that King told his audience to abandon “burn, baby, burn” and believe in “learn, baby, learn” The message changed Jenkins’s mind. “It got me thinking more deeply about my dream, and what I wanted to get out of life.”

A teacher at Lincoln Academy who lives in Rockland, Jenkins has served in the Maine Legislature and as mayor of both Lewiston and Auburn.

Jenkins is one of the few Bates alums to have met both King and, later while working at Bates after graduation, King’s mentor, Benjamin Mays, Class of 1920.

“It was truly amazing meeting two men who had such a profound impact on the civil rights movement,” Jenkins told the Boothbay Register.

Robert McAfee ’56, former president of the American Medical Association and longtime Portland-area surgeon, wrote an essay for the Maine Sunday Telegram about two of his high school teachers who later became his patients.

“Teachers are very special people,” he wrote. “They not only share knowledge in their field, but also, along with your family and faith community, create your value system, which lasts a lifetime.”

McAfee asked a former chemistry teacher who became a patient why he chose McAfee over more experienced surgeons.

“He replied, ‘Robert’ – for I was forever first and foremost his student, not just his surgeon – I remember that you could derive the Henderson-Hasselbalch chemical equation better than any student I ever had, so you must be a good doctor!”

The retirement of Rus Peotter ’75, the 15-year general manager of WGBY-TV in western Massachusetts who got his start at WCBB-TV in Lewiston, prompted a feature story from The Republican of Springfield, Mass.

At a gala to mark his retirement, “there was no absence of superlatives to describe Peotter. Awesome. Unconventional. Special. Networker,” wrote Cynthia Simison. His wife told Simison that “I’m married to a can-do, I-do man. Rus is genetically wired to help other people.” 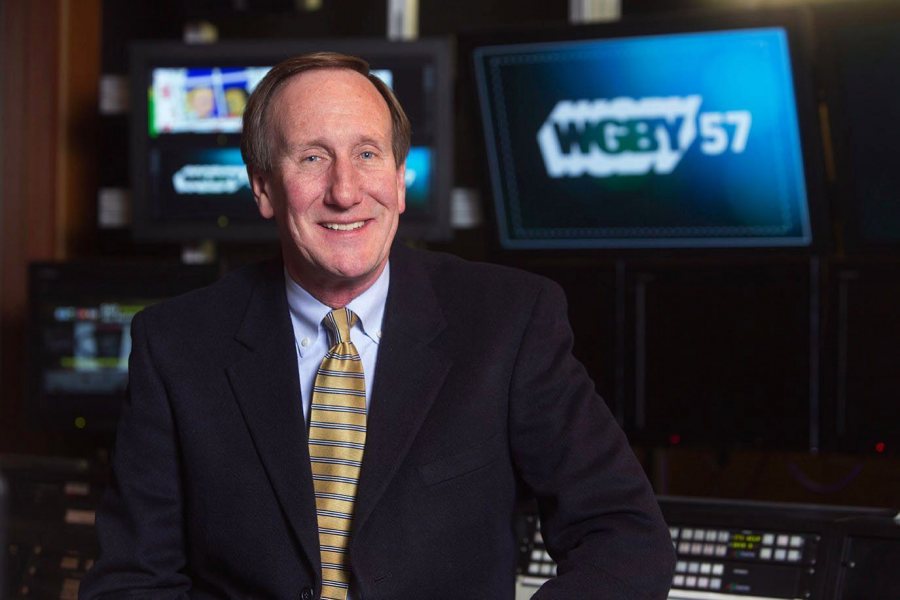 Peotter sees his retirement as a changing of the guard. “Our business is changing remarkably,” Peotter told Simison. “I think I’m smart enough to know what those changes are, and the things that need to be done are going to require two things: a lot of work and a lot of time.”

Poetter and his wife have recently lost parents. “Life is precious,” he told The Republican. “I know how precious it is, and I’m not sure I wanted to work 12 hours a day, six days a week. It starts to affect how you see things out the window, how you look (at life) in the rear-view mirror.”

As Gardner described it, “suddenly the camera’s viewfinder caught fire. An engineer came over, ripped off the burning component, calmly replaced it, and reassured Peotter, ‘You’re doing fine.’ Peotter was hooked. ‘I loved it,’ he said.”

“One of the cool things about acting is that you are always learning and you are always adapting,” said Nate Stephenson ’18 in a feature story in The Ellsworth American. “That’s what I’m still trying to wrap my head around.”

Stephenson, a graduate of Maine’s Ellsworth High School, is a theater and French double major, currently studying in Nantes, France. 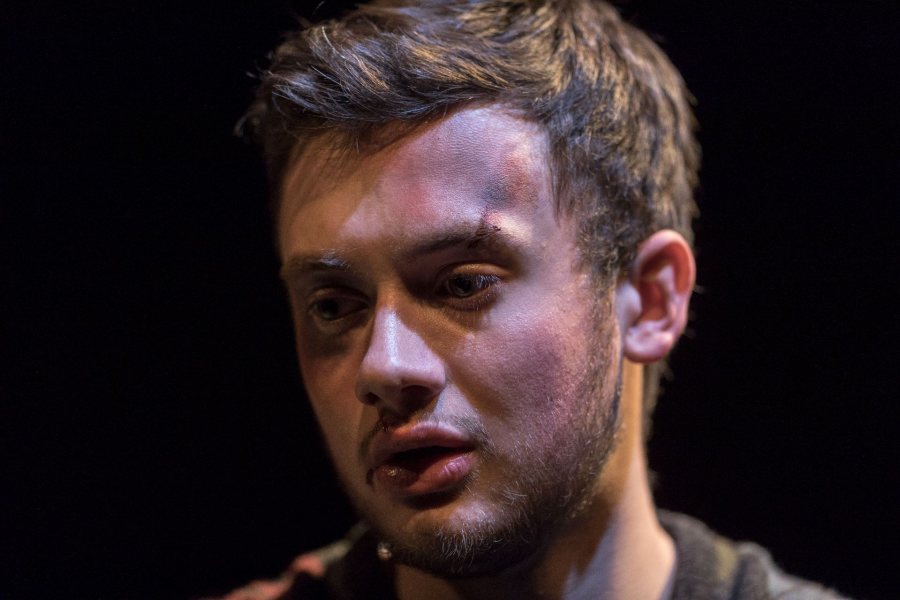 Nate Stephenson ’18 of Ellsworth, Maine, performs a monologue in the Bates production of The Pillowman on Dec. 7, 2016. (Josh Kuckens/Bates College)

In the Bates production of The Pillowman, writes David Roza, Stephenson “memorized two-page monologues and managed the tricky task of being a character and a storyteller on stage,” a role that won him a nomination to the Kennedy Center American College Theater Festival’s regional competition for the Irene Ryan Scholarship.