A chorus of music rehearsals and practices often fills the halls of the Olin Arts Center. On Wednesday evening, the music included the Gamelan Ensemble, led by Associate Professor of Music Gina Fatone.

Featuring an array of metallophones and drums, gamelan is a percussion-based genre from the Indonesian cultures of Java and Bali. The arrangements are intricate, often involving precise interlocking patterns between different instruments to create a larger sound.

The rhythmic stress of gamelan is distinctive, with the accents generally falling at the end of the bar, which is difficult for an ear accustomed to Western music. “Being asked to hear it differently in a very fundamental way is challenging,” said Fatone. 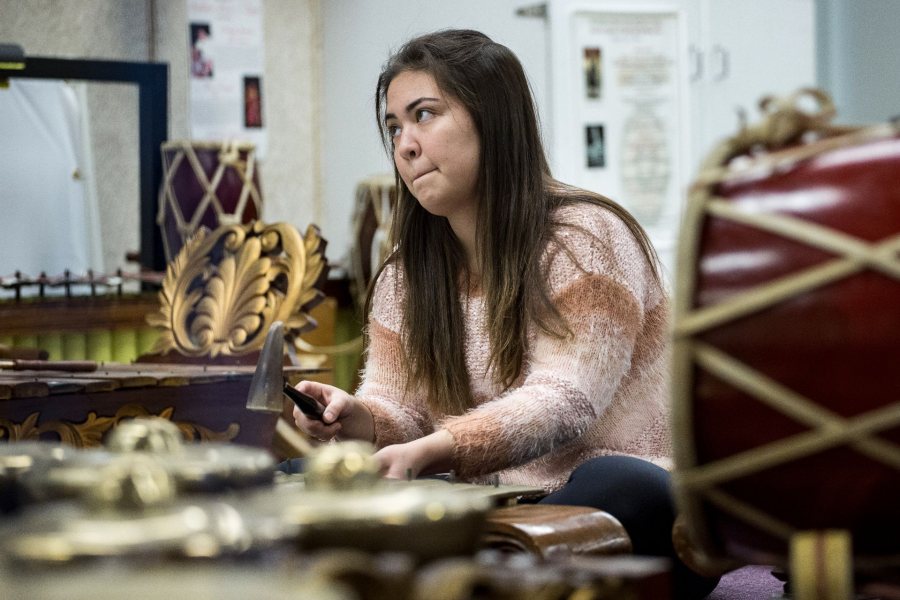 Maddie McLean ’17 of Hood River, Ore., often seen belting out an Adele song with the Crosstones, is a newcomer to gamelan.

“A cappella is such a different beast: You have someone conducting. With this, you have to really listen to each other,” says McLean, who says that listening is helping to improve her counting and rhythm.

Kinsey Moser ’18 of Burke, Va., who grew up with traditional Korean music and dance, says she “wanted something completely different, and I didn’t think I could find another ensemble like this outside of college.”

Lecturer in Asian Studies Keiko Konoeda, in her second year at Bates, is encouraging students in her classes to join. Konoeda finds some similarity to the gamelan in her past experiences. “Some of the music in gamelan sounds like old traditional Japanese,” she says.