Paper coffee cups soon to be an un-Commons sight

If you took all the paper coffee cups that the dining Commons goes through in a typical year and laid them end to end, that line of cups would be nearly long enough to connect Lewiston with Portland, about 36 miles away. And it would number about 750,000 cups.

But if your bucket list includes linking the two cities with a line of used Bates-branded paper cups, you’ve missed your chance. As of April 24, as a way to reduce the waste that Bates sends to the local landfill, Dining Services will no longer stock paper cups in Commons. (They’ll still be available in the Bobcat Den.) 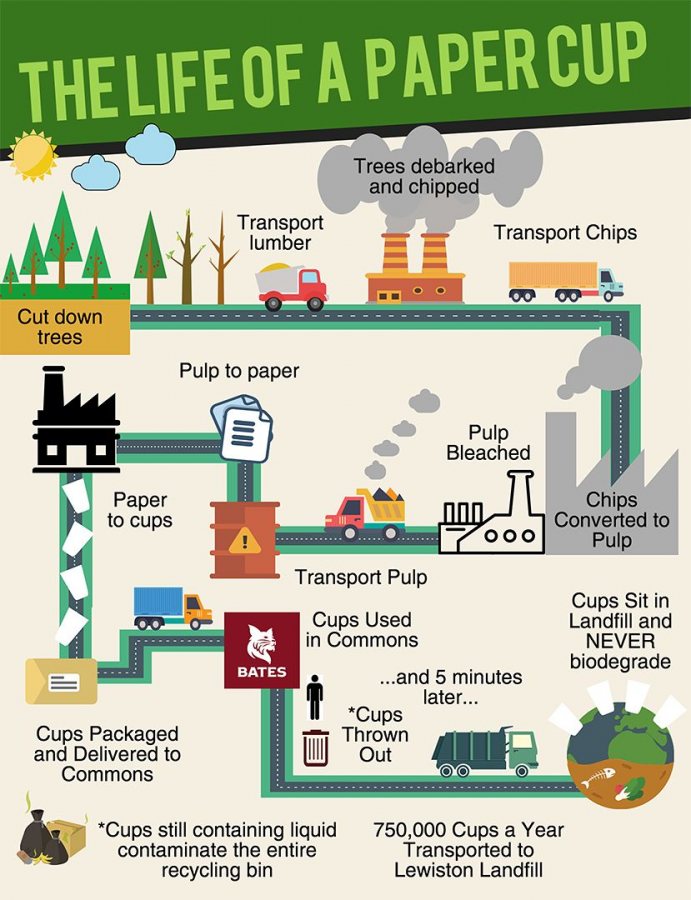 From the sustainability standpoint, paper cups are a sorry proposition. Manufacturing them requires lots of trees, water, and energy (usually from fossil fuels), and still more fuel to transport them — all for something that you’ll use once and then throw at the wastebasket.

The environmental insults don’t stop there. The same wax or plastic linings that make paper hot-beverage cups leakproof also make them prohibitively difficult to recycle. Student interest in seeing the end of paper cups in Commons has been building for some time, and last fall the college decided to drop the cups from Commons once and for all.

“They aren’t consistent with Dining Services’ philosophy, and certainly not with the institution’s move towards a more sustainable culture,” says Christine Schwartz, assistant vice president for dining, conferences, and campus events.

Knowing, however, that Commons patrons will always want to take a post-prandial cuppa away with them, Dining Services is revamping its beverage-container offering in Commons even as it eliminates the paper cups. 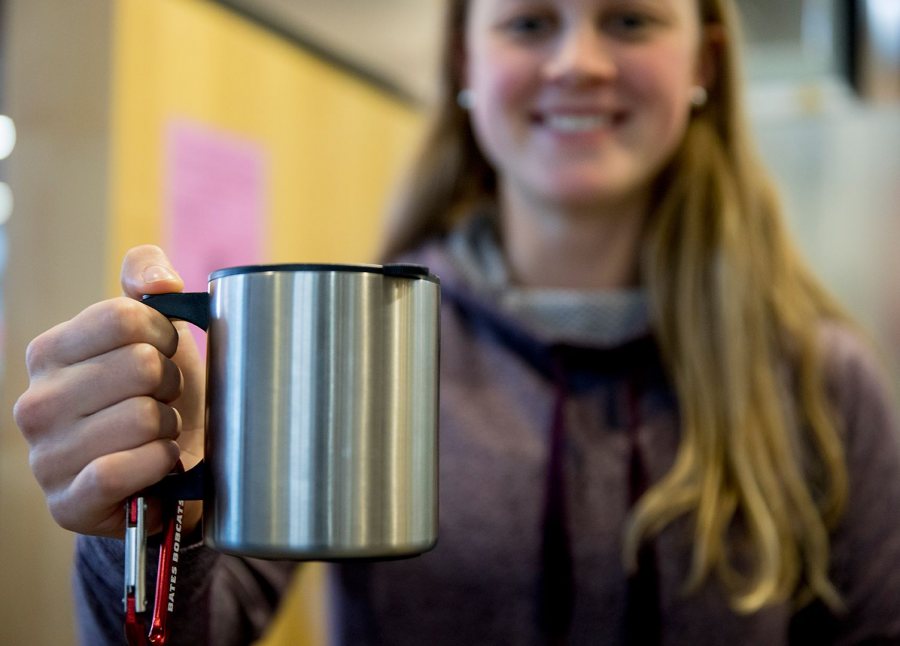 Mugging for the camera: Like every other Bates student, Laura Rand ’18 of Barrington, R.I., will soon have a personal reusable container like this to call her own. (Phyllis Graber Jensen/Bates College)

If Dining Services is taking away the paper cups with one hand, with the other it is giving every Bates student a dandy replacement: a lidded, insulated stainless-steel mug, complete with carabiner to hang it from a backpack. These so-called personal reusable containers, or PRCs, come with not only lids and carabiners but a bit of social engineering power as well.

“You have personal responsibility for that mug. It’s on the student to take accountability for their role in being sustainable,” says Hannah Slattery ’18. An environmental studies major from New Hampshire, Slattery is a Bates EcoRep and a member of both the Committee on Environmental Responsibility and the “mug committee” that devised the cup elimination plan.

The PRCs will be rolled out via a “smoothie promotion” on April 10, the Monday of finals week. “You’ll get your mug, you get a smoothie, and then we’re going to encourage students to bling their mug,” says Schwartz — with stickers, gewgaws, trinkets, doodads, and other bling courtesy of Dining Services. 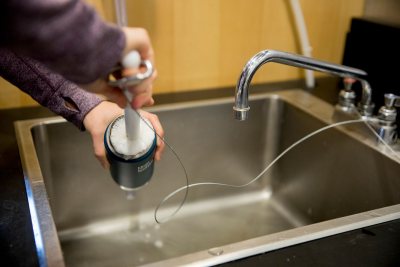 Laura Rand ’18 demonstrates the new mug-washing station in Commons, which makes life more hygienic for folks toting their own mugs around — as every Bates student who’s on campus will soon be doing. (Phyllis Graber Jensen/Bates College)

Another encouragement comes in the form of a new mug-washing sink that’s been in service in Commons since February.

In other changes to Commons drinking technology, the current 7.5-ounce plastic tumblers for soda and water will be replaced with 12-ounce models, and a line of 12-ounce Melmac mugs for hot beverages will be added. Both products are for use only in the dining hall.

Given Bates’ activist tradition, it’s not surprising that student interest helped drive the decision to dump the cups. (A measure of that interest is the fact that 1,204 students — out of a student body of around 1,700 — took part in the online vote to decide which of two cups would be the official PRC. The handle-and-carabiner model beat a shapely cup-holder design by 692 to 512.)

Even as Dining Services was looking more closely at the issue, Sustainability Manager Tom Twist and the Committee on Environmental Responsibility were seeking student proposals for Green Innovation Grants.

“We decided to get all of those people together, get all of the energy together, and find a solution that could work for everybody,” says Slattery. In fact, the mug committee was formed around two of the cup-proposal applicants, Owen Ahlborn ’19 and Julia Panepinto ’20. (Panepinto applied for the grant on behalf of the volleyball team.) Also on the committee are Schwartz, Dining Services Director Cheryl Lacey, Twist, Slattery, and another EcoRep, Olivia LaMarche ’20. 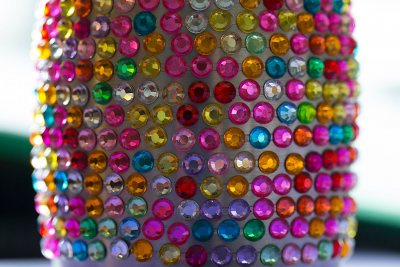 Students who don’t find the student-elected PRCs appealing can opt for a voucher worth the cup’s purchase price, says Schwartz. The vouchers will be redeemable for other models of mug at the College Store. “You’ll have to pay the difference between your voucher and whatever you choose, but it’ll at least subsidize you if you want to make a different choice.”

Students made it clear that the official PRC should be provided exclusively to students. “They don’t want us to sell those particular ones or have them in the bookstore,” Schwartz explains, “because they want it to be a unique item, a signature item for students.”

Bates EcoReps are student employees of the sustainability office. One of five tasked with media and outreach, Slattery has been instrumental to marketing the cup plan. Posters, email blasts, tabling sessions, napkin-holder texts, and meetings with other Bates organizations have all been part of that effort.

The cup project presents an opportunity to raise broader awareness of Bates’ sustainability score, Slattery points out. “We thought we should go a step further — to take a cohesive plan about cups and make it a larger plan about sustainability,” she says, “and frame it in a way where it’s not just about replacing the cups, it’s about having each student take personal responsibility for their environmental actions.”

“This is really a push on campus to amp up what we’re already doing” to advance Bates sustainability, Schwartz adds. “These environmental initiatives aren’t something new, but something that have been here for a long time and have now really become a focus of the institution. And that’s mostly due to the interest of students.” 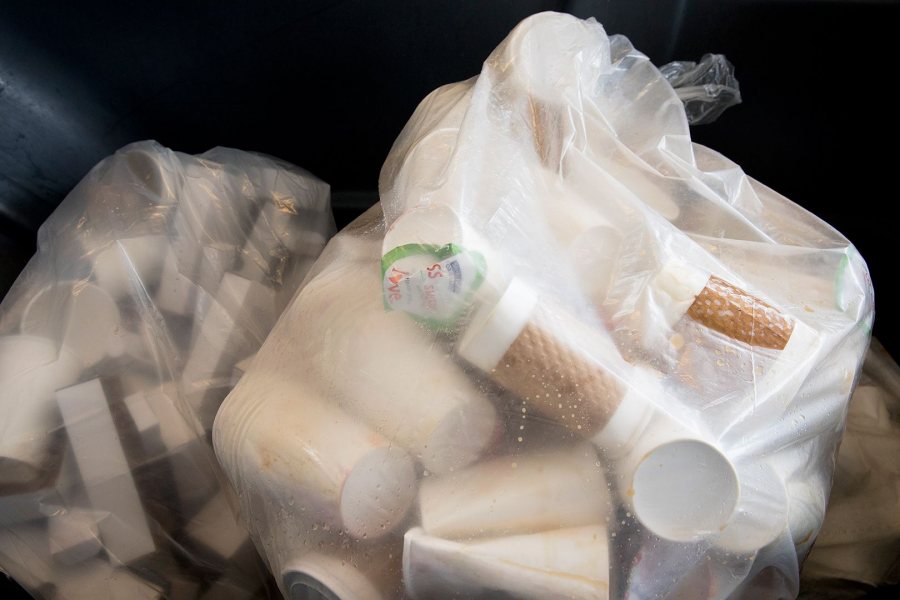 Now a dominant part of trash that Commons sends to the landfill, paper cups are about to vanish from Bates’ dining hall. (Phyllis Graber Jensen/Bates College)