Maybe you’ve heard of No-Shave November, during which facial hair becomes a symbol of support for men’s health awareness.

Well, at Bates, mustache awareness faces competition this month from No Waste November, a series of events dedicated instead to environmental health — specifically curtailing how much waste goes to the Lewiston landfill, and broadly cultivating sustainable waste-disposal habits. 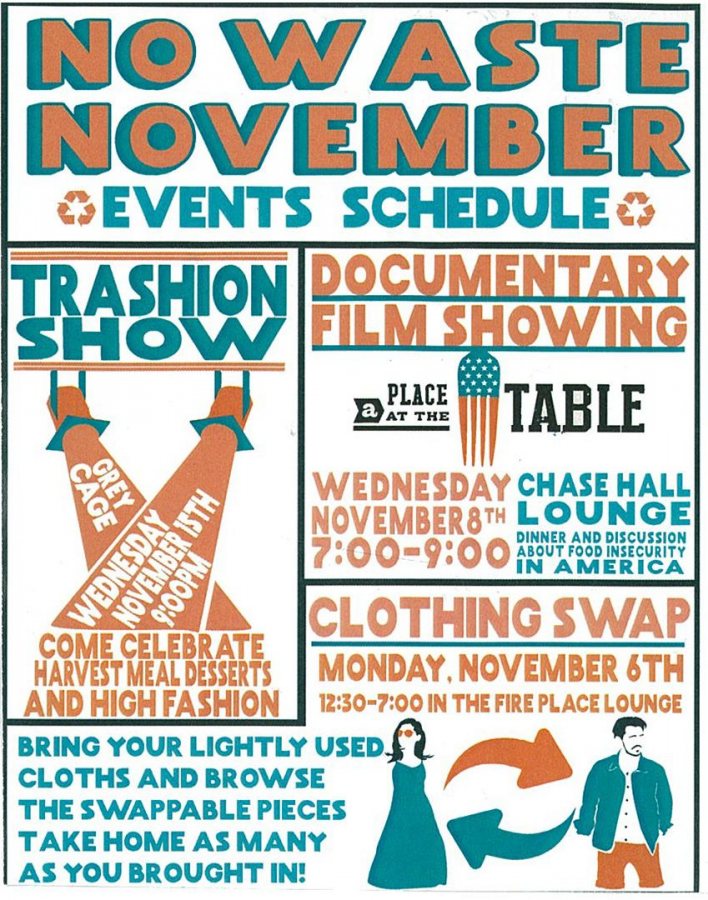 Designed by the student EcoRepos, this poster says what’s in store during No Waste November, including the Trashion Show on Nov. 15.

Featuring a “waste audit” on Nov. 12 and culminating on the 15th with the ever-popular Trashion Show, No Waste November is brought to you by Dining Services, the Bates sustainability office, and that office’s student EcoReps.

Held in Commons’ Fireplace Lounge, a seven-hour clothing swap kicked off the series on Nov. 6. The idea, of course, was that students would bring in unwanted garments and, hopefully, take away new-to-them items that struck their fancy.

The holy grail of wardrobe optimization was an important impetus, but the swap also likely diverted a big box of idle apparel from the waste stream, as leftovers from the event will make an intermediate stop at the Trashion Show for further swappage and then end up at Goodwill or the Salvation Army.

Perhaps most important, though, the swap also called attention to the stunning amount of usable clothing that gets thrown away, and to the overall environmental impacts of the fashion industry.

“It’s kind of remarkable how much pollution comes out of it,” said Madeline McGonagle ’18 of Concord, N.H. She and Sophia Thayer ’18 of West Boothbay Harbor, Maine, both EcoReps, organized the swap.

In a 2016 article, Newsweek reckoned that Americans toss out 14 million tons of clothing annually, or 80 pounds per person. The magazine noted that in 2012, 84 percent of unwanted clothes went into either an incinerator or a landfill. 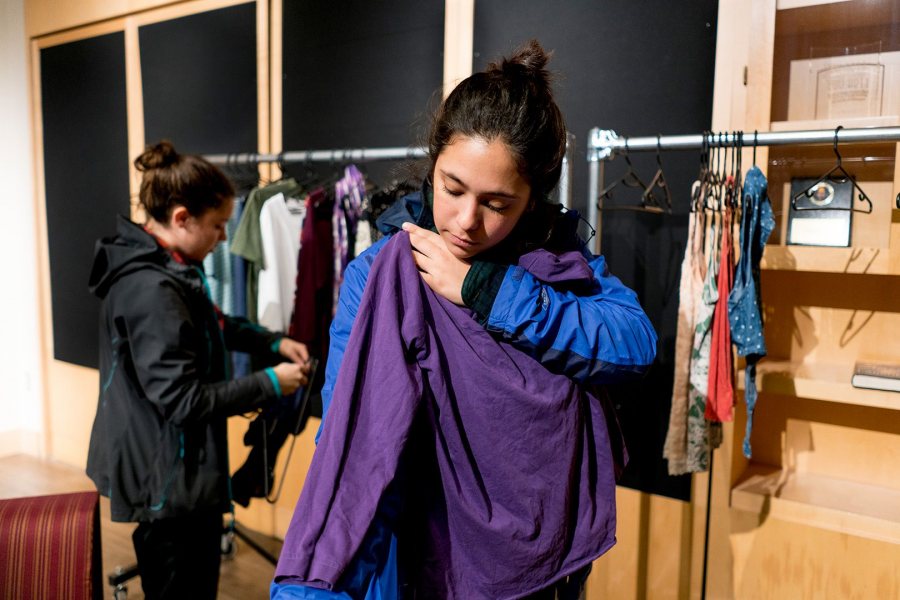 “You know I love a good purple!” says Saleha Belgaumi ’18 of Karachi, Pakistan, as she chooses a shirt from the clothing swap in the Fireplace Lounge in Commons on Nov. 6. (Phyllis Graber Jensen/Bates College)

One factor driving this tidal wave of garments is the “fast fashion” industry, which, in conjunction with the digital acceleration of shopping habits, has deranged the traditional fashion calendar. The two traditional fashion seasons, fall-winter and spring-summer, have given way to a barrage of “micro-seasons.” (As many as 52, according to the HuffPost.)

“I don’t think a lot of Bates students fall into that trap — they’re generally more thoughtful than that,” Twist said. (Three EcoReps that we talked to prefer to buy second-hand clothing.)

“This has been on the students’ radar for a while, and they’ve been looking for practical ways to do something about it,” Twist said. In fact, Bates has held a number of clothing swaps, although the Nov. 6 event was the first structured as a daylong drop-in.

The busiest times for the swap, naturally, were around lunch and dinner. We dropped in around 1 p.m., when Thayer and another EcoRep, Adair Andre ’18 of Edina, Minn., were staffing the event.  (There are 32 EcoReps this year, an all-time high.)

By then there was a lull and we got to admire two of Andre’s finds, a scoop-neck sweater in soft gray cotton and a blue blouse that’s 100 percent, as the auctioneers say, in the silk.

Out of the bag 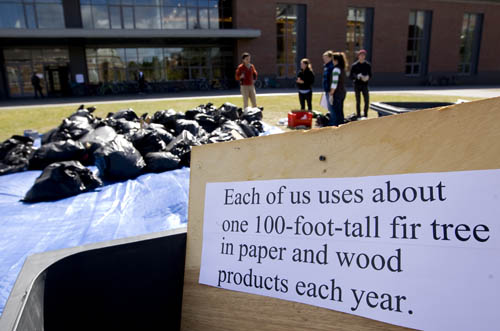 Up next for No Waste November is the waste audit on Nov. 12. EcoReps will visit Bates’ 10 largest student residences and take away three bags of trash and three of recycling from each dorm. Sorting and weighing the contents, they’ll do an analysis to better understand residents’ habits and, by extension, the efficacy of college efforts to encourage more and better recycling.

“It’s going to be right in front of Commons,” said Hadley Moreau ’19 of Falmouth, Maine, one of the EcoReps organizing the audit. “The idea of that is to raise publicity — people walking into Commons will see us doing it.”

Twist hopes to find some functional answers in the 60 bags of refuse that the EcoReps will pick through. He’s wondering, for example, about the habit-forming power of waste curtailment measures taken last winter — a drive to replace paper coffee cups with personal reusable containers, and the deployment of waste receptacles that, among other refinements, added composting to the disposal choices.

“Are our efforts working — are we seeing an increase in recycling, based on all the marketing that we’re trying to do?” he wonders. “How much of the residence trash could have been recycled or composted? Are there things that we could be capturing that we’re not?”

Hopefully the audit itself will further those goals. As an EcoRep, Moreau has given sustainability presentations to many first-year students —work that has taught her that not everyone knows about practices that others take for granted.

Citing Maine’s returnable beverage-container program, she pointed out that people from other states “don’t know what returnables are. And some people don’t know what compost is. People come from different backgrounds.” 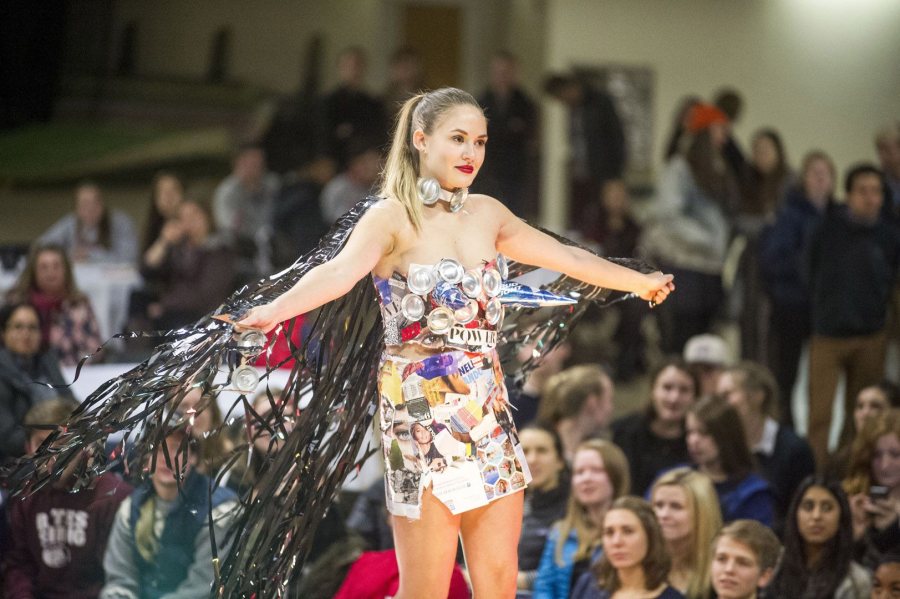 Goggles in hand, Elise Krims ’16 hits the 2015 Trashion Show runway wearing Kevin Tejada’s design “Phoenix Rising From the Ashes.” Tejada said of his creation, “If Barbarella and Madonna had a child, this would be her.” (Josh Kuckens/Bates College)

She says, “I think environmentally conscious people sometimes assume that other people know more than they actually do.”

Finally, taking refuse from thrown-away to runway, the Trashion Show follows the Harvest Dinner on Nov. 15. Andre and Thayer, behind-the-scenes veterans of the show, have fond memories of this fashion extravaganza where the couture is fabricated from discarded teabag packets, Pepperidge Farm Goldfish bags, foil yogurt seals, magazines, coffee cups, and other salvage from the dustbin.

Thayer recalled a Miley Cyrus-style bubble miniskirt crafted from paper cups, and both students hailed the designs of Kevin Teijada ’17 as the ultimate in Trashion style — “amazing,” as Andre said, citing the 2015 ensemble “Phoenix Rising From the Ashes” that Tejada styled for model Elise Krims ’16. The outfit featured a bustier, collar, and goggles made from beverage cans, as well as fringed wings, repurposed from videotape, trailing from Krims’ otherwise bare arms.

While the basic spectacle will remain the same this year, the Trashion Show program will be tweaked a bit. The show will be held as usual amidst a cornucopia of desserts in the Gray Athletic Building, but Dining Services has taken steps to make the dessert service refuse-free. (Because who can refuse a delicious dessert?)

And Thayer noted that the EcoReps will strive to get the waste-reduction message of the show to a larger audience for a longer time. “We’re focused on events with impact,” she said — “continuing impact.”

Paper coffee cups soon to be an un-Commons sight