A walrus skull wearing a Bates ski team hat sits on a table in the Carnegie Science Hall office of Professor of Geology Mike Retelle.

“The walrus is a really strange story,” he says.

Retelle and a student found the walrus skull, along with two bowhead whale skulls, while gathering data in 1993 to reconstruct the historical sea levels of beaches on Cornwallis Island, located in the High Arctic of Canada.

The remains were geologically useful because Retelle and his student were doing a lot of radiocarbon dating, which requires “any available organic material,” he says, “and that includes shells and driftwood — and in this case, bones.” 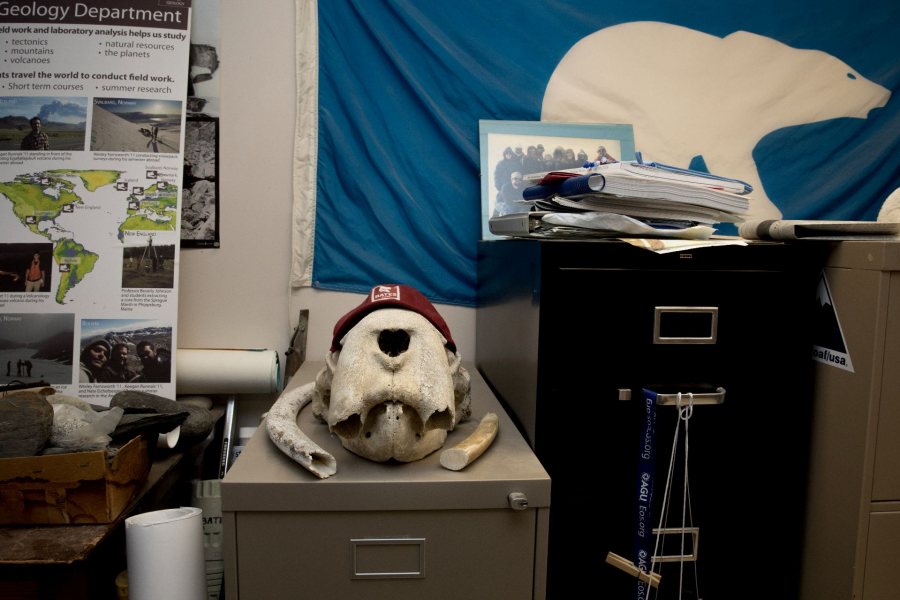 Because they couldn’t bring a whole whale skull home to Maine (it was as big as a kitchen table), they took its inner-ear bones, which are made out of ivory, a compound particularly valuable for carbon dating, explains Retelle.

Back in Maine, they did the dating. “Sure enough, we had a progressive, really nice story of how sea level changed in response to how the land rose up as the heavy glaciers retreated,” Retelle says. “Kind of a cool story.”

But the walrus skull told a different story. 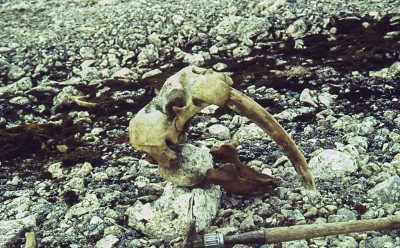 Mike Retelle’s 1993 photograph of the walrus skull as he first saw it in the Canadian Arctic.

Retelle and his student found that skull, including its tusks, on a spot of ancient shoreline about three miles inland from the existing coast and 20 meters above sea level. “We thought the skull would help us date the shoreline, but its radiocarbon age was really different from what the elevation would suggest. It was a strange relationship,” he says.

Turns out, the walrus had walked inland about three miles from shore and died. As old walruses die, they sometimes “get a little bit crazy and go on walkabout. They’ll go somewhere other than the shoreline to die,” Retelle says. So, “his age represented by radiocarbon had nothing to do with the ancient shoreline he was on.”

Retelle recalls how he cut the tusks into slices for carbon dating. He took an old table saw onto the Historic Quad, running an extension cord back into Carnegie Science.

That day, a young biologist was interviewing for a faculty position at Bates. “He was another Arctic guy, and I’m out there with dirty clothes cutting walrus bones, which made a hell of a smell. But he said, ‘That’s cool,’ and we hit it off.”

That was Will Ambrose, and he’s been Retelle’s colleague and collaborator for more than two decades. “We’ve worked together on a lot of projects in the Arctic.”

The walrus is now a useful teaching tool that Retelle uses in his climatology class to demonstrate radiocarbon dating in climate reconstruction. And he uses it to explain the superiority of pure ivory over porous mammal bones for carbon dating (the latter collects more modern carbon from lichens and mosses).

Retelle, a hat wearer, has placed many a cap on the walrus. The ski team one is the latest. “It just looks good,” he concludes.