Last fall, new to the Bates faculty and to Lewiston, artist Carolina González Valencia started going to YWCA Central Maine as a way to make friends and get to know the community.

The connection gave González an even better introduction to the city than she might have hoped for: the chance to work with students from Bates and from Lewiston High School to create a mural in the YWCA gym. The mural’s theme: “Women of Color Leading Change.”

Four Bates students under González’ oversight offered technical support for their younger counterparts, who came up with the mural’s imagery and did most of the painting. The high schoolers were members of 21st Century Leaders, a federally funded program that provides academic support, academic enrichment, and leadership development at schools around Maine. 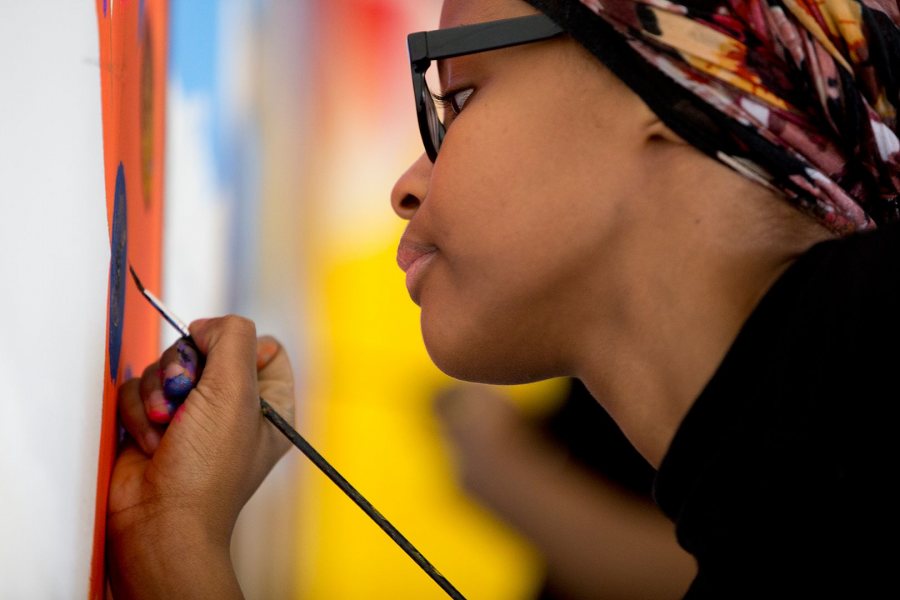 All but one of those 13 LHS students were girls, and all but one of the girls were Muslims from African immigrant families. So it’s only fitting that the group will introduce the mural during the YW’s sixth annual Stand Against Racism event on April 30, a gathering that showcases the organization’s stated mission of eliminating racism and empowering women.

“We wanted them to think of themselves as leaders and see themselves there on the wall,” says González. A native of Colombia, she works in new media, film, and video, and teaches in the art and visual culture department at Bates. González is also a Mellon Diversity and Faculty Renewal Postdoctoral Fellow — part of an initiative to get more scholars from underrepresented groups into the profession. (She’ll become a tenure-track assistant professor in her second year at Bates.)

“I’m interested in art projects that work like a bridge to connect different people, disciplines, or ways of thinking,” says González. And she’s very interested in the kind of temporary community that occurs when people break out of their routines and join forces to make something happen — “working together, problem-solving, and having fun and laughing together.” 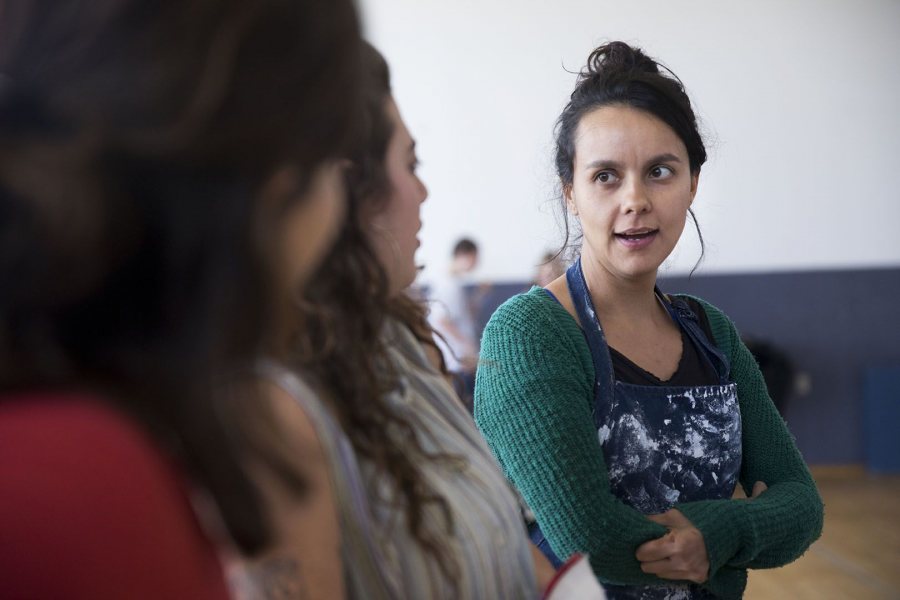 Carolina González Valencia, a lecturer in art and visual culture, talks with her Bates students as they work on the YWCA mural on March 26. (Phyllis Graber Jensen/Bates College)

From a personal perspective, González felt a strong connection with the 21st Century team. “I came to the U.S. when I was 15 and I was in high school,” she says. “So I know what it means to be experiencing all the teenager craziness, but then at the same time, being immersed in this confusion of being an immigrant, and the struggles that come with that.”

Painted in acrylic, the mural wraps around a corner of the gym and is high enough that the painters needed scaffolding to work on it. The 21st Century Leaders team decided on the colorful imagery: a feminized Trayvon Martin sitting in Abe’s place in the Lincoln Memorial, the social-justice rallying cry “Black Lives Matter,” a yellow lion, girls who look like the painters, trees, and lots of flowers.

“It’s a community gym” used by all ages, says Natalie Bornstein, the YWCA’s social justice and advocacy manager. “And now there’s this gorgeous, very vibrant, colorful image on the wall that has a strong anti-racist message that combines substance and style.

“All the preschool teachers love it, and the kids are drawn to it because it’s bright and colorful. It’s fantastic.”

Bornstein proposed the mural idea. She had worked with the 21st Century Leaders in previous iterations of Stand Against Racism, and had connected with González at the YW after an introduction from Darby Ray, head of Bates’ Harward Center (which provided a grant to help purchase materials for the mural).

“I was thinking, what a great collaboration it would be for the three of us — for Bates, the YWCA, and this group of high school students — to do a tangible project together,” Bornstein says. “I’m also personally interested in the idea of art-based activism.”

Jenn Carter, 21st Century Leaders director at the high school and three other Lewiston schools, worked with the LHS students to start developing the imagery. “The conversation centered around what their experience is as young women of color, and what do they know about women of color in leadership roles,” she says. 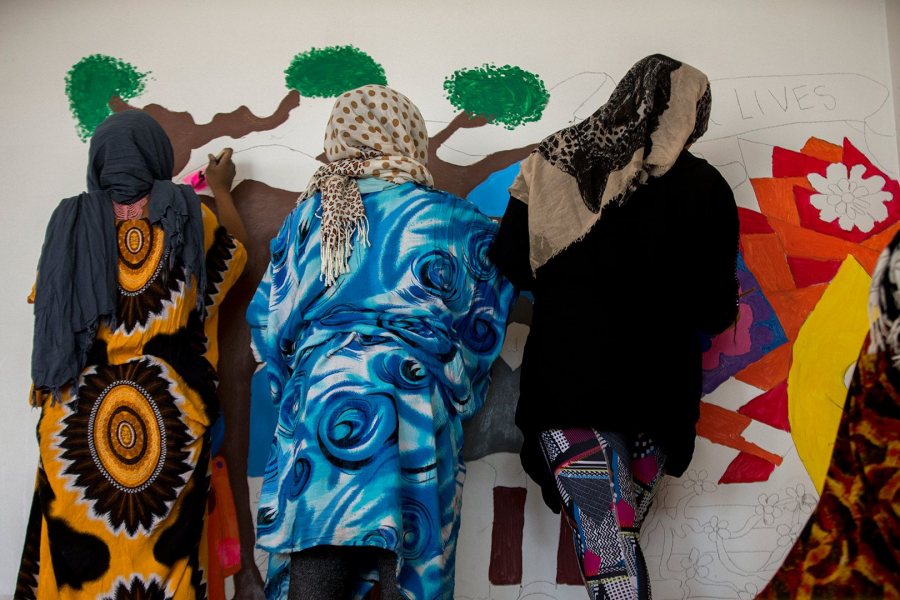 “We watched YouTube videos of famous women who would be considered leaders. And they brainstormed what they thought it meant to be a leader.”

The high schoolers sketched, the Bates team composed the sketches into a lines-only layout for the mural, and González made copies of the layout so that the group could collectively work out the coloring. As a last preparatory step, she used a projector to trace the mural’s lines onto the gym wall.

“It was important to me that the high schoolers came up with the visual ideas, and they had to articulate why they wanted to do that,” she says. “Our students were really good at keeping the essence of the ideas — that it was the high schoolers’ mural and their voice.”

Most of the painting took place on two Sundays in March and April. The LHS students applied most of the paint, while the Bates students helped with the tricky bits and mixed colors. The high schoolers “really took charge and took pride in their painting, suggesting different patterns and ways of doing things,” says Diamond, a studio art major. “So there wasn’t a lot of work that we needed to do.” 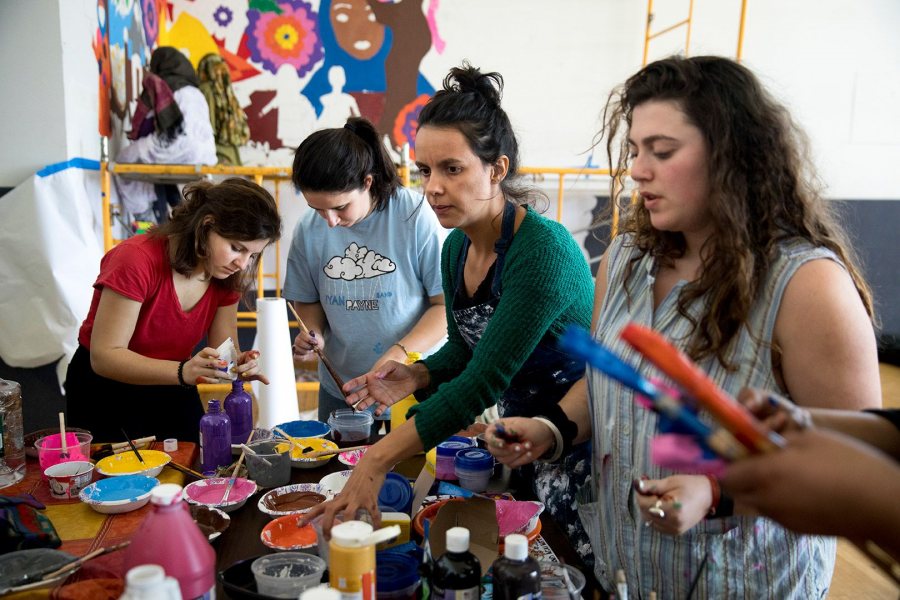 Because of cramped quarters on the scaffolding, the group split up into teams that took turns painting. For the down times, there was music and dancing — González requested a favorite song from each participant and compiled their choices into a playlist. Lunch was pizza.

“That’s a lot of what our program is — we try to balance its being a concrete and serious leadership project with the fact that we have a lot of fun. That’s why the kids show up.”

González sees the mural project as a success in myriad ways. It provides an enduring record of the high schoolers’ ideas, she says, “and because they live here, they can see the mural as they keep growing. And it’s not only for them, but for everybody who goes to the YWCA, so it’s very powerful.” 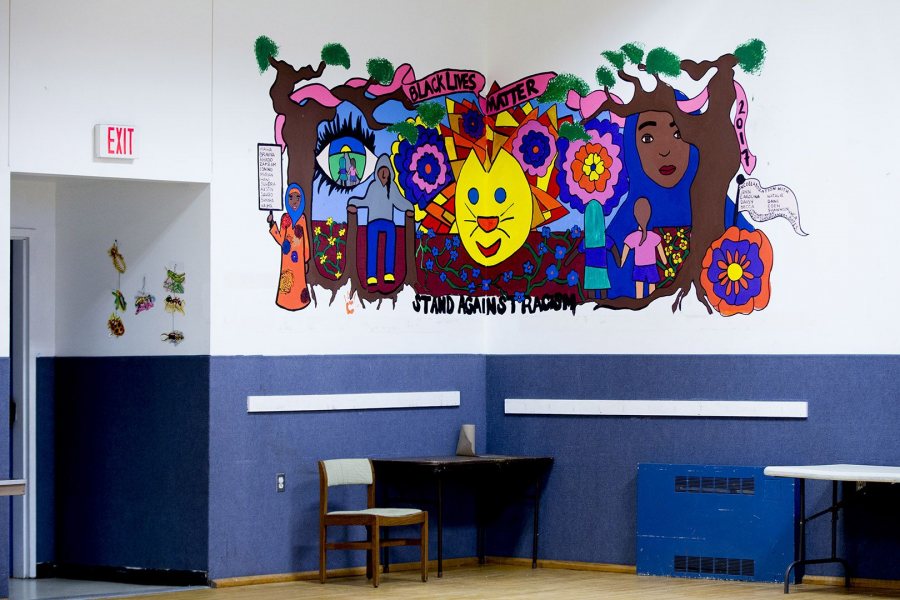 The completed mural awaits its official unveiling at the YWCA’s Stand Against Racism event on April 30. (Phyllis Graber Jensen/Bates College)

For her students, the project provided an unusual opportunity for community involvement and a stimulating break from their routines. It was also a valuable lesson in organization. “It was important for our students to see the whole process, and that art projects don’t just happen,” she says.

The project, she adds, has “been very special to me. I’ve been here less than a year, and I have created friends and ways in which I can understand Lewiston. And now to collaborate in this project that I truly believe in — it’s been great.”