Look What We Found: Mike Milliken’s doll that sees all

Dubbed “McKell B Well” by Milliken, the doll spends most — but not all — of his time in the cave-like space. And though students, faculty, and staff who join Milliken’s strenuous boot camp–style workouts may fail to notice him, he’s still watching.

“You never know how he gets there.”

McKell is like an Elf on the Shelf, says Milliken, referring to the stuffed Santa’s elf that some parents deploy in their homes before Christmas, telling their children that the elf is there to keep an eye on all that naughty/nice stuff.

Just as an Elf on a Shelf turns up in new spot each morning, so does McKell. “He finds himself around the kettle bells, dumbbells, sometimes on the medicine balls. Sometimes up high. You never know how he gets there,” says Milliken, whose B Well program provides a broad menu of exercise, nutrition, and mindfulness activities for the Bates community, all delivered with some fun and levity, thanks to McKell (and Milliken). 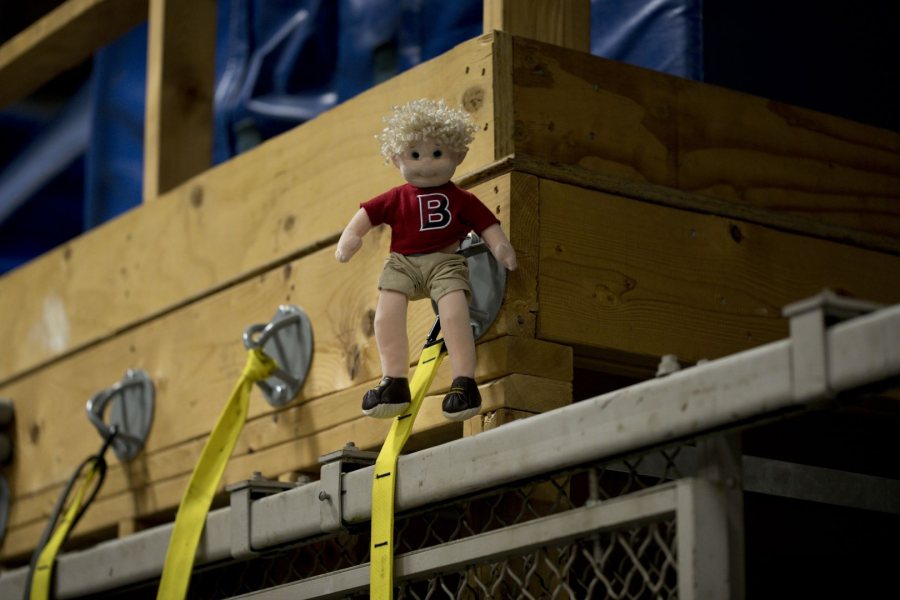 A “spoof gift” to Milliken from his Human Resources colleague Brenda Sawyer, McKell has been known to turn up in Commons. “Kidnapped,” suggests Milliken, who has found his doll in various locations: by the apples, the salad bar, or the vegan bar. He has also appeared with the donuts. Milliken enjoys that irony.

And McKell has been featured in social media videos for the B Well program, including a hip-hop performance on nutrition. “He likes to dance,” says Milliken.

From a Distance: What can you see in the bike garage on Frye Street?