If you’ve come back to Campus Construction Update longing for more of the high anticipation and drama that surrounded last summer’s residential transformations: Sorry!

For the academic angle, tune in to Campus Construction Update again next week. Today’s installment focuses, instead, on human comforts and a question of pressing importance to those of us who spend the summer at Bates:

Why is the Bobcat Den, Bates’ beloved subterranean café in Chase Hall, closed? 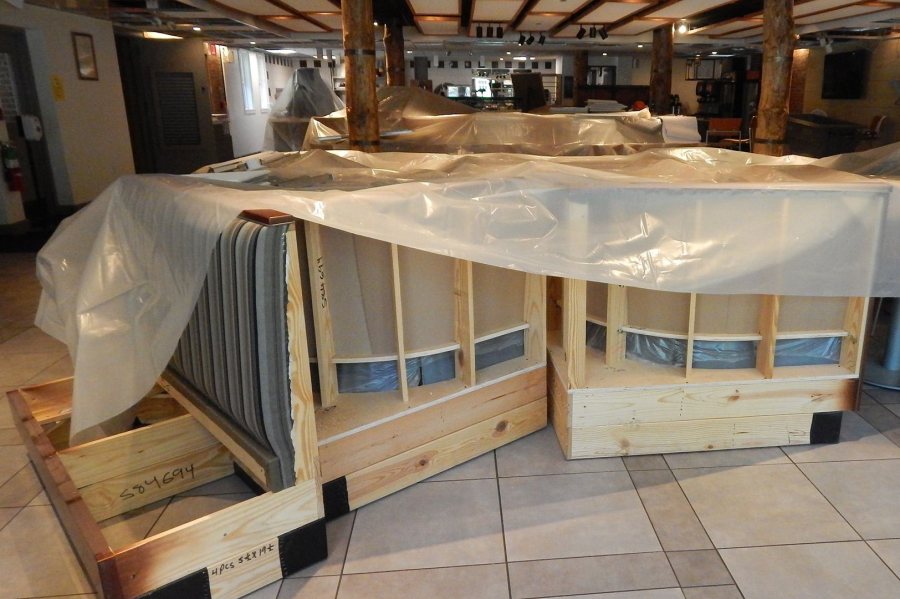 Acckk! The Den’s closed until August! Here, booths have been moved away from the wall and given a protective cover. (Doug Hubley/Bates College)

The good news is that the closure is only until mid-August, and in the meantime Dining Services is throwing hard-core Den-izens a lifeline in the form of special meal and beverage offers in Commons.

And, of course, the closure is for a good cause: the replacement of heating and air-conditioning infrastructure in the Den, and the extension of air conditioning into the high-ceiling area of Memorial Commons, above the Den. 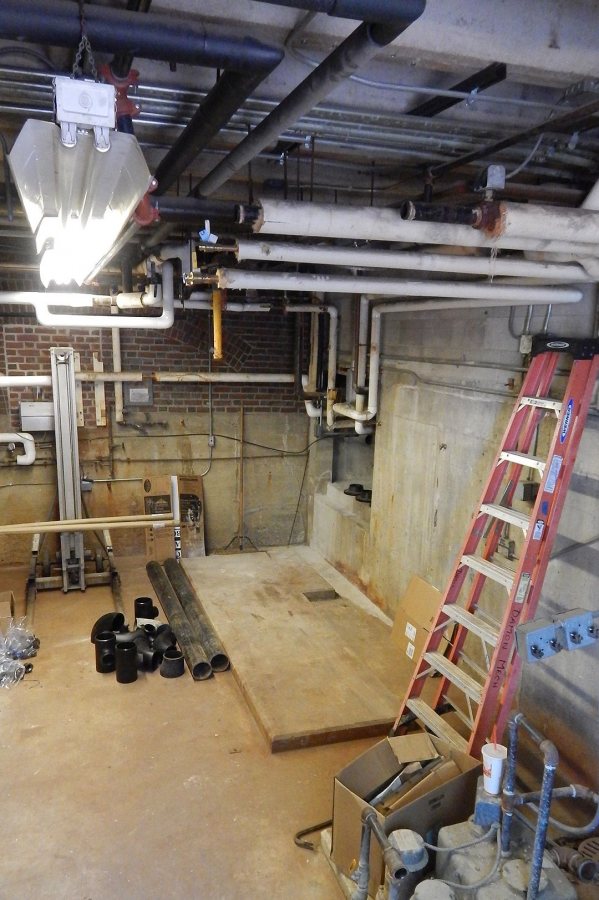 “The Den’s had air conditioning, but the upstairs hasn’t,” explains Bates energy manager John Rasmussen, Facility Services project manager for the Chase Hall undertaking. “So the Events Office people are pretty happy to be able to air-condition that space better than just opening up the windows.”

What sparked the project was the need to replace two heat exchangers that have heated the Den since the rear section of Chase Hall opened in 1950. Those units distributed air warmed by the campus-wide steam system.

Air conditioning in the Den was driven by cold water from a chiller that serves several buildings. The AC pumped chilled air above the acoustic ceiling tiles, apparently following a sort of HVAC trickle-down theory that was about as effective as its economic equivalent. 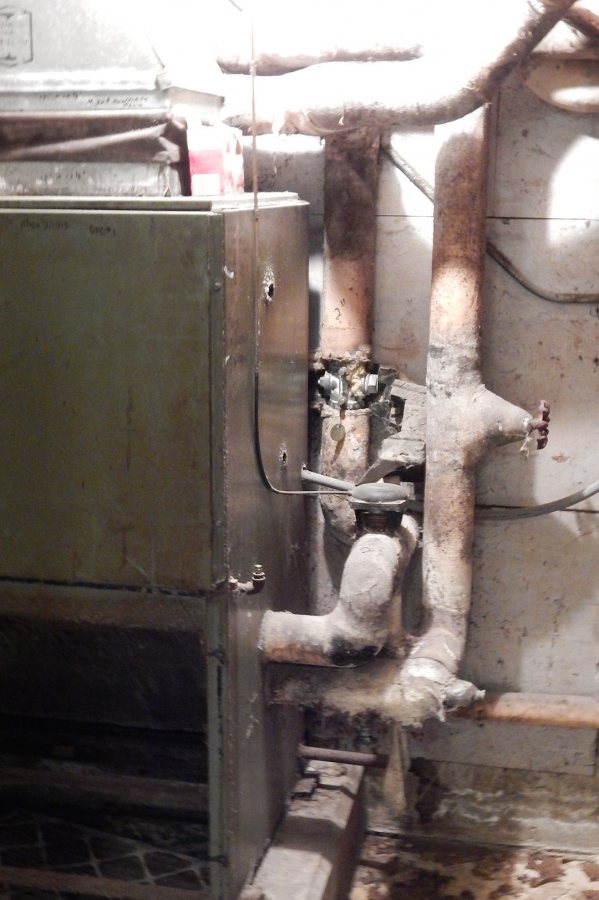 One of two obsolescent heat exchangers in the Den that are being replaced during summer 2017. (Doug Hubley/Bates College)

With the heat exchangers at the end of their useful lives, it made sense not just to replace them, but to upgrade the whole system — in fact, to a different heating method.

Even though the central steam plant heats most of campus, steam is not the point source of heat in many Bates buildings. Instead, those buildings use so-called hydronic heating, which circulates hot water to warm interior spaces. Central steam heats the water for the hydronic system.

Most of Chase Hall is already hydronically heated, and this summer’s project will bring in the Den and the high-ceiling commons into the system.

“It’s very difficult to control steam systems, because they’re massive and they tend to hold the heat,” says Rasmussen. Henceforth, only Lane, Pettigrew, and Schaeffer halls will be warmed by radiators clanking with steam from the central plant. 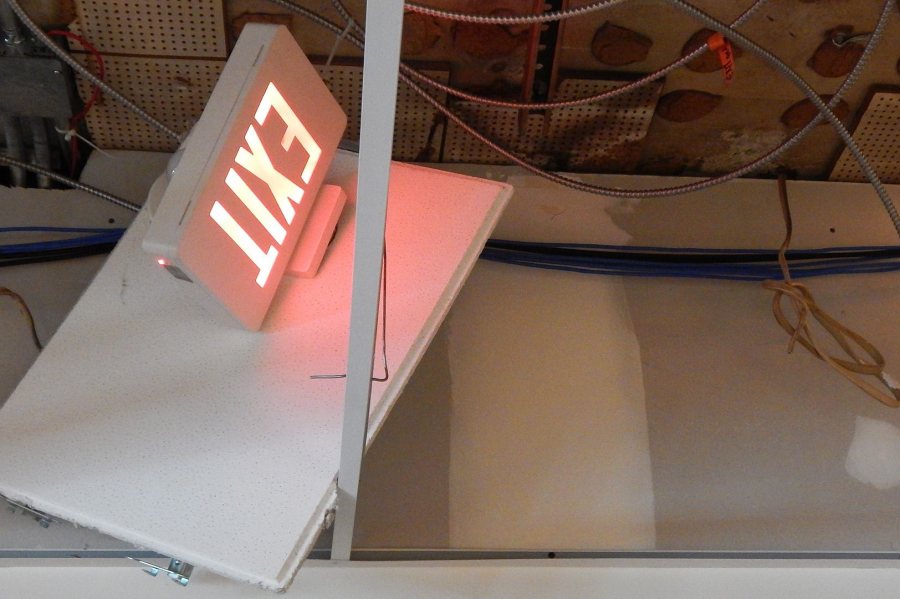 Ceiling tiles have been removed or pushed aside in the Den to make way for pipes that will supply heating and cooling water to new overhead climate-control units. (Doug Hubley/Bates College)

With a budget of $600,000, what does the Chase Hall project entail specifically? A new steam-to-hot-water heat exchanger will be installed in the Chase mechanical room.

New pipes will connect that exchanger, as well as the existing chiller, to new fan-coil units that will push air of the desired temperature to the desired locations. HVAC contractor Damon Mechanical, as Rasmussen points out, is running new pipework clear across the building’s footprint, from the mechanical room in the southeast corner to the Den in the northwest. It’s a disruptive work involving the removal of ceiling tiles, lots of pipefitting and soldering, and plenty of noisy drilling through masonry. 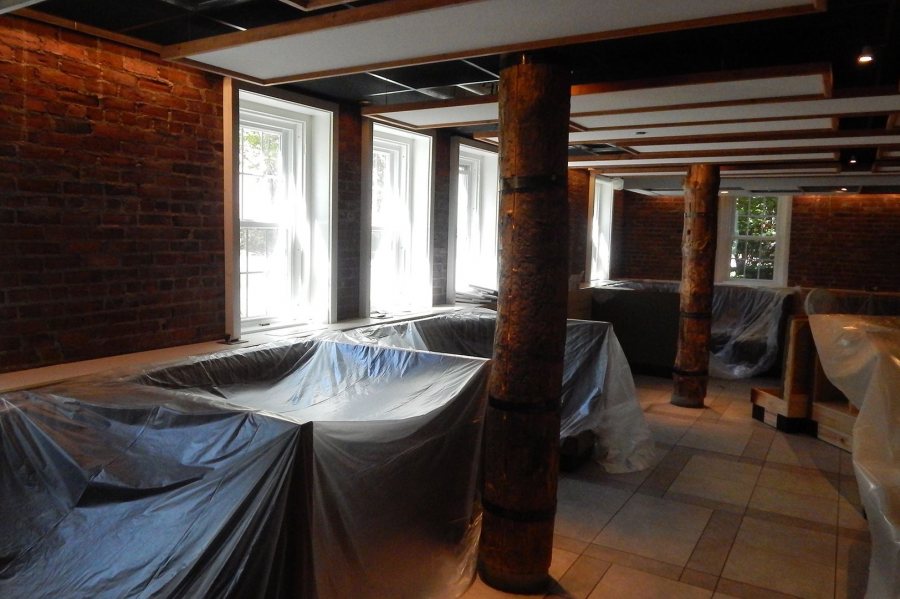 It’s a wrap: Booths in the Den are protected with plastic sheeting as new heating and air conditioning equipment is installed. (Doug Hubley/Bates College)

New air handlers, occupying the closets in the Den where the 1950-vintage units once labored, will pull in outside air for ventilation. And new digital controls will tie all of Chase into the centralized network that regulates interior heating all over campus.

Five fan-coil cabinet units will go into Memorial Commons. Four ceiling units in the Den will heat or cool both their immediate surroundings and, via ductwork, areas never before blessed with AC, such as the Den servery, the adjacent prep kitchen, and the tiny staff lounge.

So it’s not just we customers who’ll have something to look forward to when the Den reopens, on Aug. 22.

Can we talk? Campus Construction Update welcomes your questions and comments about current, past, and future construction at Bates. Write to dhubley@bates.edu, putting “Campus Construction” or “Have you tried hydronically grown tomatoes?” in the subject line. Or use the 21st-century commenting system below. 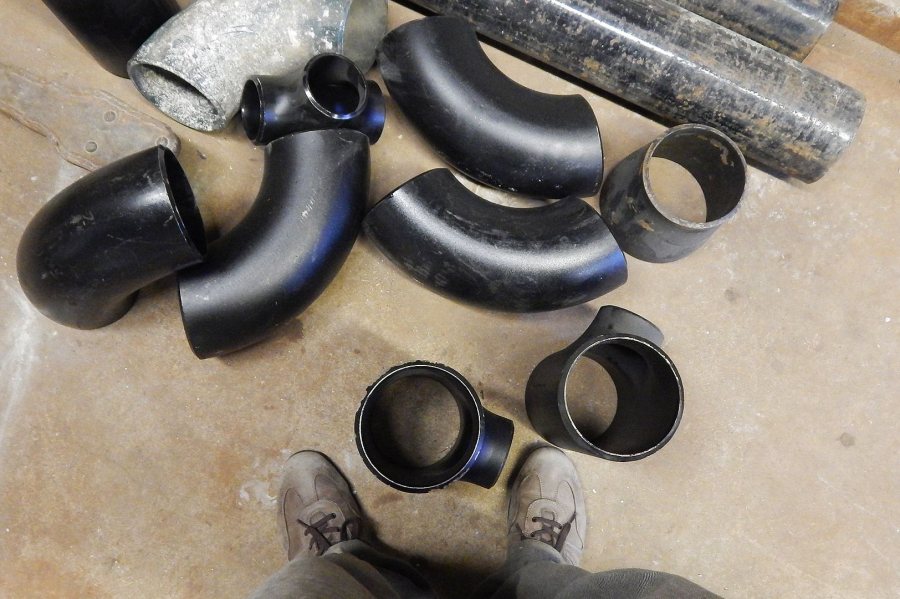 Pipe sections in the Chase Hall mechanical room awaiting incorporation into a new heating system for the rear of the building. (Doug Hubley/Bates College)