John Creasy, who ushered in the thriving modern era for geology at Bates, dies at age 71

Professor Emeritus of Geology John Creasy, whose appointment to the Bates faculty in 1975 ushered in the thriving modern era for geology studies at Bates, died June 21. He was 71 years old.

Creasy earned a B.S. with high distinction in geology from Colorado State University in 1967 and completed a Ph.D. at Harvard University in 1974. He taught briefly at Middlebury College before joining the Bates faculty. He retired in 2014. 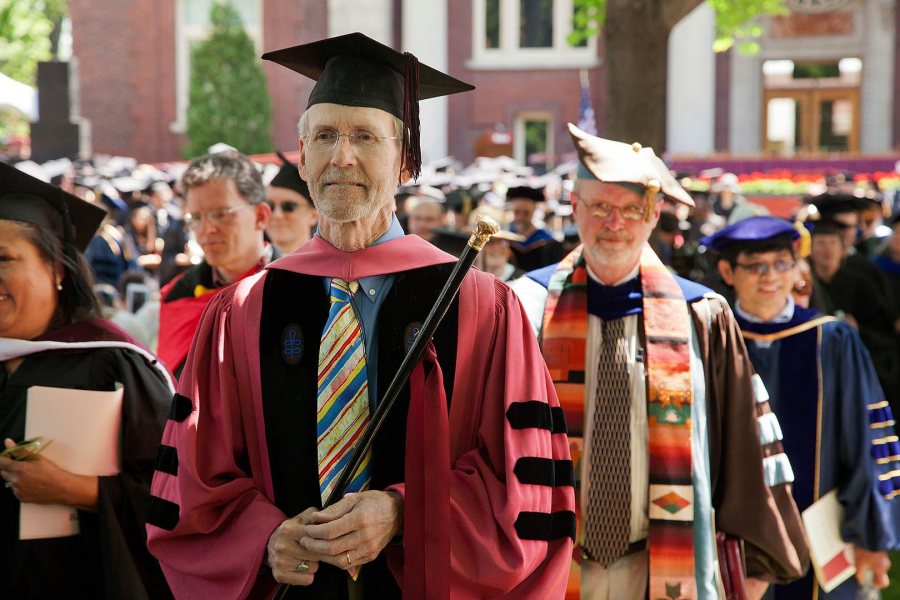 Creasy’s arrival at Bates coincided with seismic shifts both at the college and in the discipline of geology. At Bates, he was part of a major expansion of the faculty and an invigoration of the curriculum under President Hedley Reynolds. At the same time, Creasy’s coming of age as a geologist coincided with the field’s embrace of the revolutionary theory of plate tectonics, the idea that the earth’s crust is made of massive plates that can move around.

Against that backdrop, Creasy used the resources at hand, including Bates’ relatively new Short Term option and the senior thesis program, to expand and deepen the geology major into today’s highly rigorous program, one emphasizing extensive fieldwork (a tradition fostered by his predecessor, Roy Farnsworth), intensive lab work, and a required two-semester thesis.

A celebration of John’s life will be from 5 to 7 p.m. Friday, June 30. For directions, email rbitherbroene@yahoo.com.

Gifts in memory of John Creasy may be made to the Bouley Fund for Geology, Office of College Advancement, Bates College, 2 Andrews Road, Lewiston ME 04240 or online. Please include gift designation in the comment field.

David Bailey ’81, professor of geosciences and chair of the department at Hamilton College, was one of Creasy’s early students, and he recalls how the 1973 oil crisis also contributed to making geology “an up-and-coming field of study.” The hiring of Creasy and another young geologist, Patricia Cashman (who would go on to a long career at the University of Nevada in Reno), added to the sense that suddenly, geology at Bates was hip.

“My freshman year, I took a geo course on a whim,” recalls Professor of Geology Dykstra Eusden ’80. “Here was this young guy who was so into plate tectonics, which was brand-new. He just captivated me and a whole bunch of other kids.”

Eusden, who was hired by Creasy in 1988, recalls Creasy leading a special-topics course on plate tectonics that involved “reading the brand new peer reviewed papers.” It was more than a thrill, Eusden says, “trying to get our heads around this new global paradigm — it was awesome!” 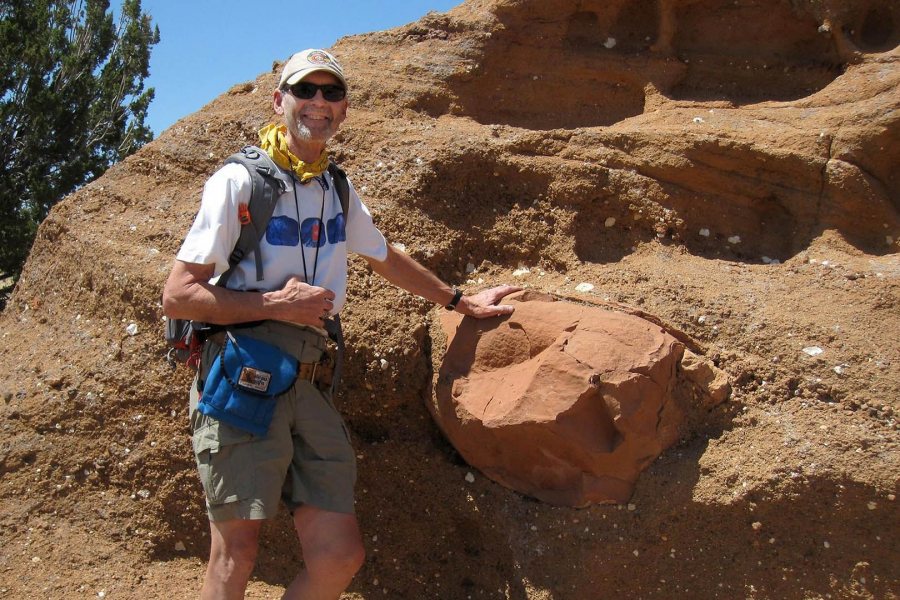 Near Flagstaff, Arizona, in 2011, on his final Short Term trip to the U.S. Southwest, John Creasy poses next to examples of “volcaniclastic” rock, which has been moved or affected by wind, water, or similar action. (Photograph by Dykstra Eusden ’80)

For many geology students, the excitement of that youth movement — and Creasy’s high expectations as a professor — was felt during excursions far from Bates that created, in some cases, lifelong bonds.

Bailey, for example, was a first-year when he took what would become Creasy’s signature course, a five-week Short Term trek to map the geology of the U.S. Southwest. Bailey thought the course would be a lark. Then he got into the van for the trip West.

“But it was so good for me, and I am where I am because of him.”

Driving upwards of 15 hours a day, the 20 students riding in two vans were expected to observe the passing terrain, all the way from Maine to Arizona, and make field notes. “At the end of every day, after dinner and doing dishes, we would have a quiz on the geology of the states we drove through,” Bailey says. “John ran the course like a boot camp in geology.”

And his students loved it. Tall and reserved in manner — the actor James Cromwell could be his doppelgänger — Creasy looked the part of the taskmaster. “We were in awe of him, but his intensity was contagious,” Bailey said. “There was so much respect for him: I wanted to work my butt off to impress John, to achieve for John.”

By 1981, Bailey’s senior year, Creasy had ramped up the department’s thesis program. “My thesis defense at Bates was the hardest of my career,” he says. “John brought in a big-name Ph.D. as part of the examining committee, and they put me in my place. My master’s and Ph.D. defenses were love fests in comparison.

“But it was so good for me, and I am where I am because of him.”

A few years ago, several geo majors from that Short Term, joined by Creasy, enjoyed a mini-reunion at an alum’s camp on Sebago Lake. “The geology department was our home at Bates, academically and socially,” Bailey says. “When you spend so much time in the lab and in the field together, you bond. That speaks to the power of the Bates geology department.”

“His philosophy was to teach to your strength; he didn’t shoehorn us into one area. Thirty years later, I so appreciate that gift.”

Equally powerful was Creasy’s support of the junior faculty members in his department, and he helped them build teaching and research careers by giving them the freedom to follow their interests. 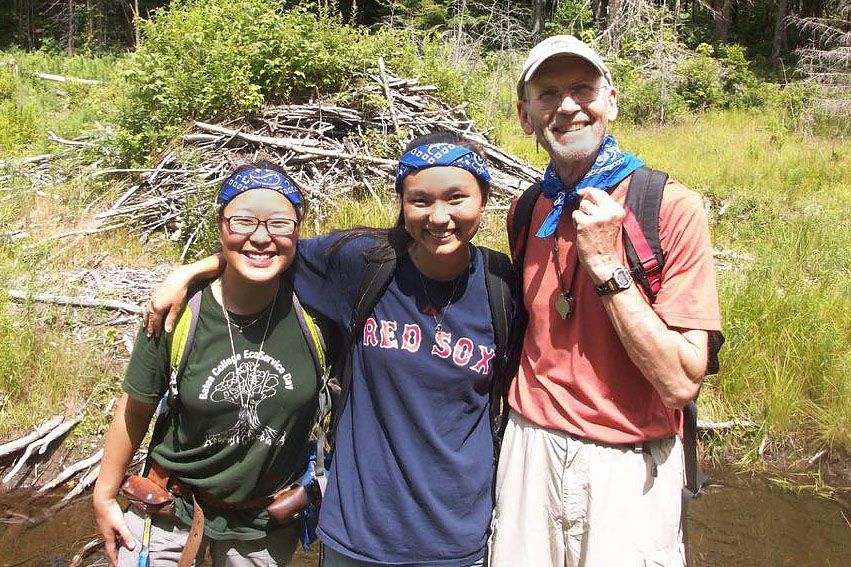 John Creasy poses with geology majors Saebyul Choe ’14 and Sula Watermulder ’14 during a mapping project in the Gilead Quad in western Maine. The two majors had given Creasy the matching blue bandana for the trip. (Photograph by Dykstra Eusden ’80)

“John gave us direction when we needed it, but also allowed us to explore and follow our passions,” Eusden said. “His philosophy was to teach to your strength; he didn’t shoehorn us into one area. Thirty years later, I so appreciate that gift.”

That open-minded approach extends to the department’s hiring practices, says his colleague Professor of Geology Beverly Johnson. When Johnson, whose expertise is in biogeochemistry and paleoclimatology, was hired, Bates at the time was actually seeking a hydrogeologist. “But John had the openness to consider candidates like me with other abilities,” she says.

“He was a mentor and friend, almost like an older brother — a calming influence.”

As a young graduate student in the 1980s, Professor of Geology Mike Retelle had a one-year appointment to the geology faculty. His youth and energy showed; as a teacher and researcher, “I was all over the map,” he recalls.

Still, Creasy hired Retelle to a tenure-track position in 1987. “He must’ve known that I could direct that energy,” Retelle says with a shake of his head. “John hired people and let them do what they were best at. He let us rock and roll.” 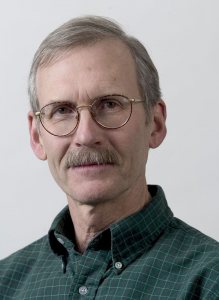 Importantly, adds Retelle, Creasy chose to serve as department chair for long stints in the 1990s, shouldering loads of administrative work as Retelle and Eusden were establishing themselves. “He protected us,” Retelle says. “For me, he was a mentor and friend, almost like an older brother — a calming influence. Every morning, we’d check in with each other. We’d run together. We’d talk about everything under the sun.”

As a researcher, Creasy’s work added to the knowledge of the geologic history of the White Mountains. As a doctoral student at Harvard under the legendary Marland Billings, he studied ancient volcano craters, known as calderas, within the White Mountains. Through field mapping and laboratory analyses, he identified two major periods of volcanic activity 100 to 200 million years ago, associated with the opening of the North Atlantic Ocean.

In 2014, Johnson delivered the traditional retirement tribute at the final faculty meeting of the year. In it, she praised Creasy for “promoting experiential learning and inquiry-based approaches to teaching way before it became popular. His de-emphasis of traditional lectures and emphasis on field-based, hands-on data collection, coupled with subsequent laboratory analysis and interpretation of the data, has influenced the way all of us teach in geology.”

In practice, Retelle recalls how Creasy “gently” taught him how to teach in the field, especially during Short Term. He recalls Creasy marching his group of Short Term students to the rim of a canyon, giving them a brief overview of the wide-open space before sending them down to map the features.

“We sat on the rim watching them move around,” Retelle recalls. “Even from a mile away, by how they moved around you could see the light bulbs go on when they figured something out.”