The heavier lift has been the makeover of Carnegie 339. Structural demolition that took place during July left the room barely recognizable in early August. Gone are the tiered floor and two partition walls that enclosed a storeroom and projection booth — and yet the curious effect of this volumetric enlargement was to make the room seem smaller. 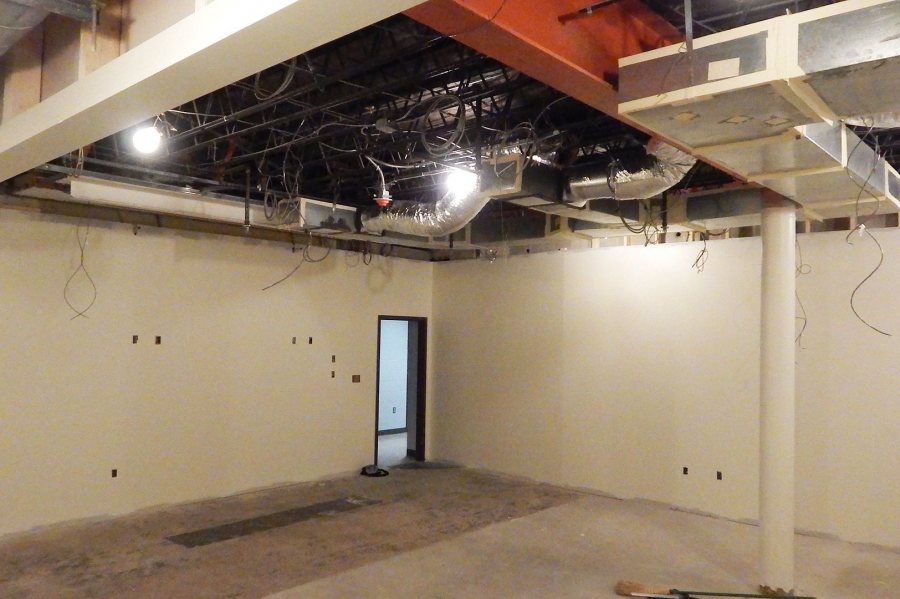 Room 339 in Carnegie Science Hall is shown on Aug. 9, midway through its renovation. The classroom is being made over to support active learning. (Doug Hubley/Bates College)

Perhaps that’s because the room was lit only by work lights during our visit. Gone with the floor and wall was the original plaster ceiling, so the permanent room lighting was on hiatus. A suspended ceiling will replace the original.

Speaking of that plaster ceiling, workers found “a lot of stuff” — abandoned materials — concealed by the old ceiling, says Paul Farnsworth. The stuff included wiring for two previous sets of lights, notes Farnsworth, the Facility Services project manager for this and several other room makeovers this summer.

Other evidence of past civilizations was revealed by removing the wooden tiered floor, which had covered a concrete subfloor. Farnsworth and the renovation team had expected to find a disused HVAC opening, which they plugged with concrete. But there was another artifact that came as a surprise. 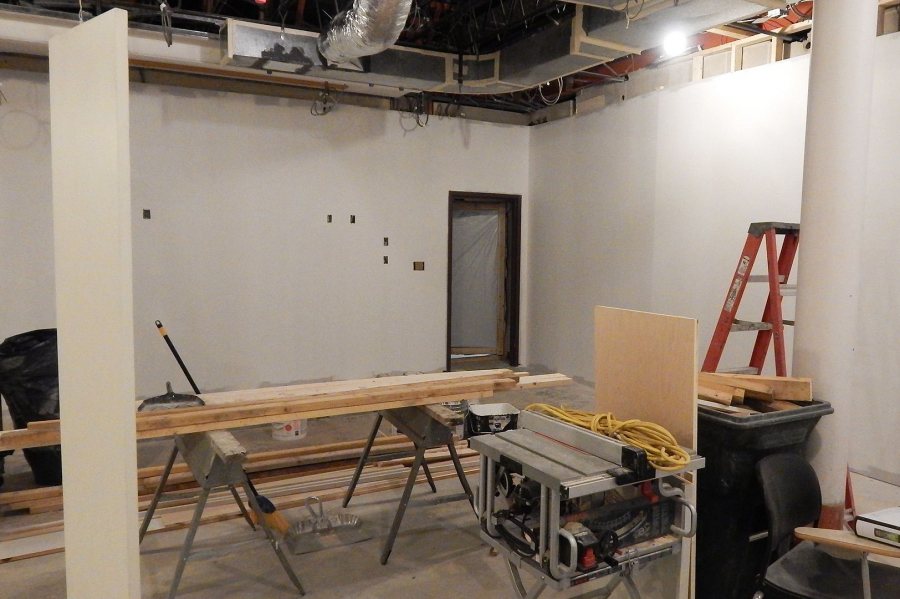 And here’s Carnegie 339 about a week earlier. (Doug Hubley/Bates College)

That was a fire suppression system designed to flood the space under the raised floor in case of a blaze. The component pipes and sprinkler heads — still hooked up — were a surprise to the construction team, as they didn’t appear on any plans and a hatch providing access to them had been blocked off by earlier renovations.

“Fortunately we didn’t damage them when we took the tiered floor out,” Farnsworth says. He adds, “It took a little detective work” to trace back the plumbing that fed the system.

Another vestige of the past will remain in Room 339, albeit concealed. An I-beam is mounted above the space where the instructor’s counter used to be, presumably to hang heavy apparatus from. The beam will stay when the drop ceiling is installed. 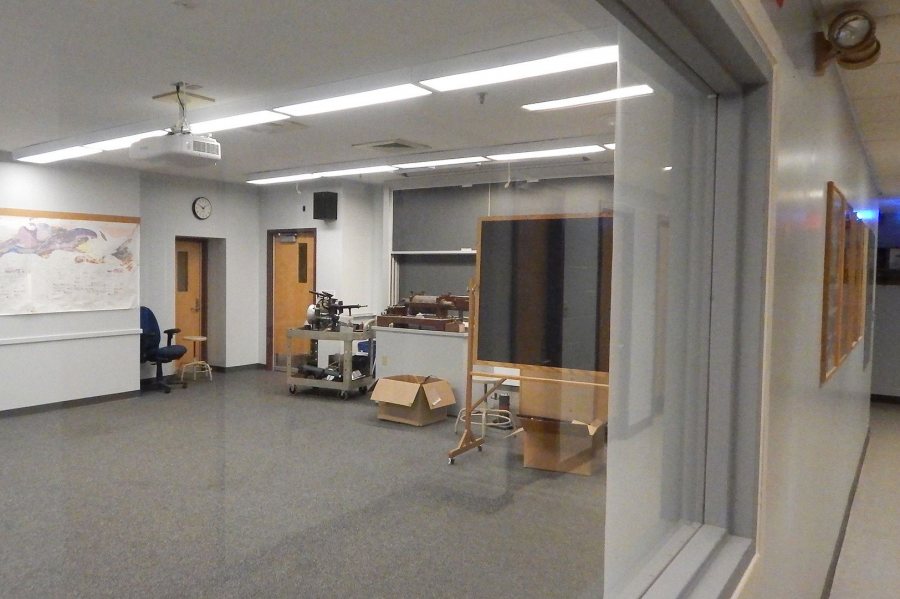 Awaiting “node chairs” and whiteboards is Carnegie 225, one of two refitted active-learning classrooms in the science building. The room is seen from a corridor through a new window intended to impart a sense of spaciousness. (Doug Hubley/Bates College)

If anyone needs to use it, Farnsworth says, it will be easy to push aside a couple of ceiling tiles to expose and make use of it. “They went to a lot of effort to put it there.”

The structural reconfiguration included the creation of a new main entrance. That doorway is now aligned with the corridor wall, in contrast to the wacky angle of its previous orientation. Because the room’s seating capacity has been reduced, from 53 to 36, the building code also permitted the walling-over of a secondary side entrance.

Farnsworth notes that the wallboard has been hung and primed, and the wiring rough-ins are complete. Finish painting is underway this week, and the new ceiling will be hung soon. 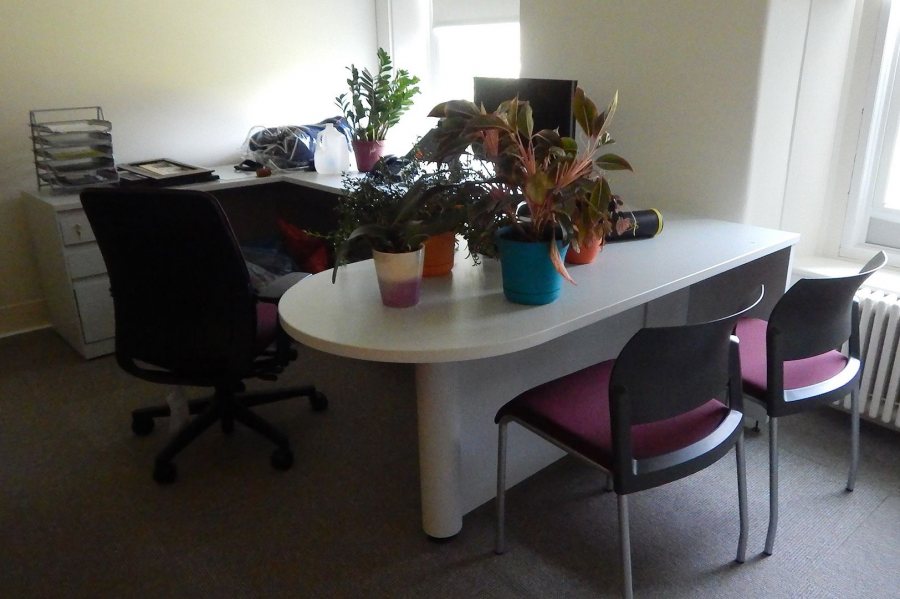 Completion of the other active-learning classroom, Room 225, is on hold until late this month, at which point whiteboards will be placed around the walls and furniture moved in. In July, a window was cut in a wall to make the room seem more spacious; college designers are now working on a translucent film to stick on the glass and minimize visual distractions from the corridor.

Hathorn Hall is also on Farnsworth’s summer chore list. Essentially complete is the conversion of a large common space for emeriti faculty on the ground floor to a center for neuroscience. Enjoying serene, big-windowed offices in Hathorn since Aug. 1 are neuroscience professors Jason Castro, Nancy Koven, and a new member of the neuro faculty, Michelle Greene.

A fourth room has been remade as Greene’s lab, which includes two isolation booths, and christened the Bates Computational Vision Lab. (Martin Kruse, another new hire and a joint appointment between bio and neuro, is quartered in Carnegie.) 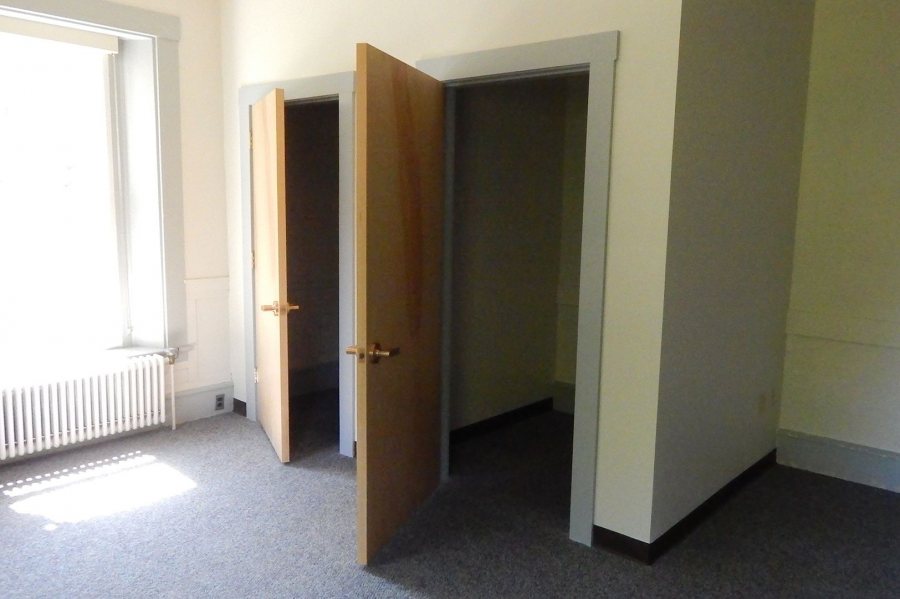 Finally in Hathorn, the math computer lab in Room 207 has been upgraded to meet the burgeoning campus demand for desktop computers. Along with new paint, furniture, audiovisual gear, and ceiling, the room was outfitted with 21 new Dells — an increase of six from the previous allotment.

As in Carnegie 339, here too the renovators found a surprise above the old ceiling, which in this case was a suspended one. The surprise was soot that had flaked off a wooden beam scorched in some long-ago fire — perhaps the 1881 belfry fire that threatened Bates’ library, which was housed in Hathorn at the time. (Students living in Parker Hall got the books out of harm’s way.)

The lab was also upgraded to CAT 6, or Category 6, computer networking cable, which puts the facility on a par with any computer lab at Bates. The old cabling, says Farnsworth, “was kind of slow for math.”

Can we talk? Campus Construction Update welcomes your questions, reminiscences, and comments about facility improvements. Please email newswriter Doug Hubley, stating “Construction Update” or “Are you, too, kind of slow for math?” in the subject line. 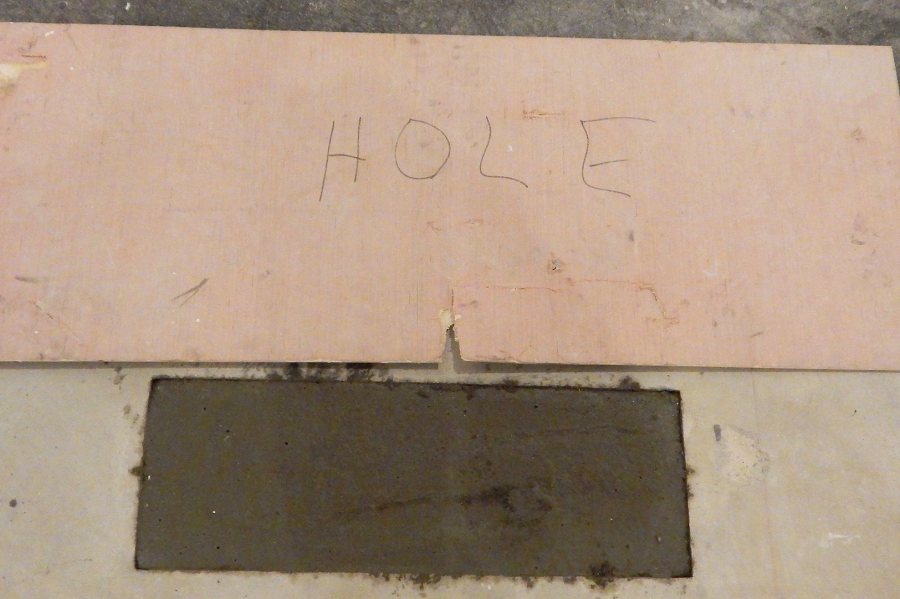 Fresh concrete plugs a disused HVAC opening in the subfloor of Carnegie 339. The sign covered the hole while the concrete was soft. (Doug Hubley/Bates College)