The sweet spot of any AESOP trip — the three-night, four-day excursions each incoming first-year takes during Orientation — is the third day, says Avery Margerum ’18 of Wyncote, Pa.

For Margerum, those trails are literal — with Amanda Fasciano ’18 of Lincoln, Mass., he’s leading a backpacking trip to Saddleback Mountain.

But whether they’re hiking up mountains, making art on Monhegan Island, or helping build homes in Lewiston-Auburn, first-years on the distinctive Annual Entering Student Outdoor Program (AESOP) trips forge connections with each other and their trip leaders. 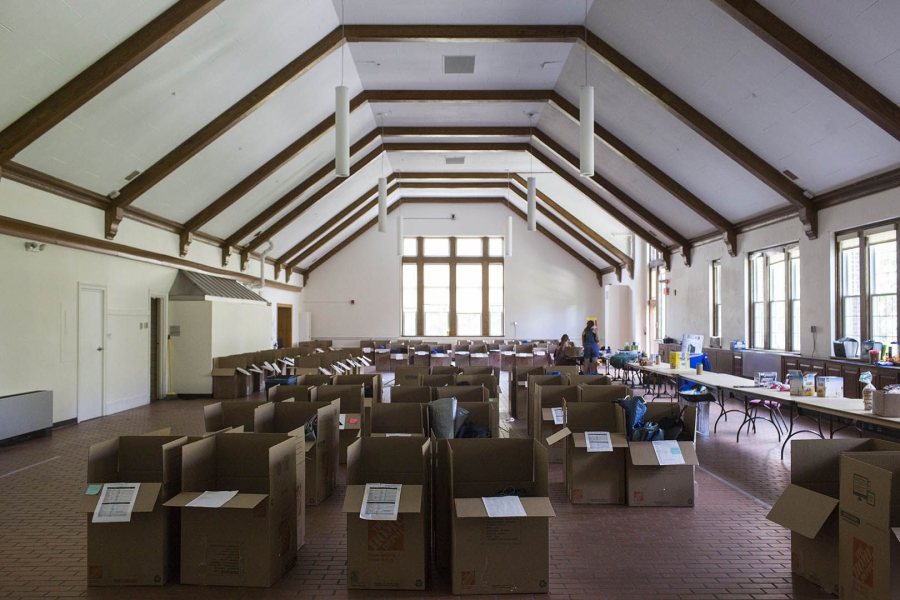 Boxes filled Memorial Commons in Chase Hall, loaded throughout the week of August 21 with gear and food for upcoming AESOP trips. (Photo by Theophil Syslo/Bates College)

“Being on a trip with the same group for four days, you really get to know the people,” says Adair Andre ’18 of Edina, Minn., one of three head coordinators. “I think it helps people get out of their comfort zone a little more and get to know people more than the surface-level introductions you have every day.”

The getting-to-know-you process is a crucial goal of the college’s nine-day Orientation program that helps the Class of 2021 transition to life at Bates, says Carrie Murphey ’06, assistant dean of students for first-year programs.

For Murphey, AESOP offers a welcome respite from the intensity of Orientation. “By the time they head out on their AESOP trips a few days into Orientation, they’ve settled some of those nerves, and they’re ready to connect in a really authentic way with a new set of people and explore and see other things,” Murphey says.

Blazing the logistical trail to that all-important third day is a momentous endeavor. Starting in January, Andre and the other head coordinators, Kurt Niiler ’18 of Freedom, N.H. and Katie Hartnett ’18 of St. Paul, Minn., began to hire assistant coordinators and 112 trip leaders, who would oversee 56 trips around Maine and New Hampshire for 450 first-years — everyone except first-year fall athletes in training.

The AESOP leaders and coordinators all came together on Aug. 21 for Leadership Week, a jam-packed period of preparation, certification, and community-building. 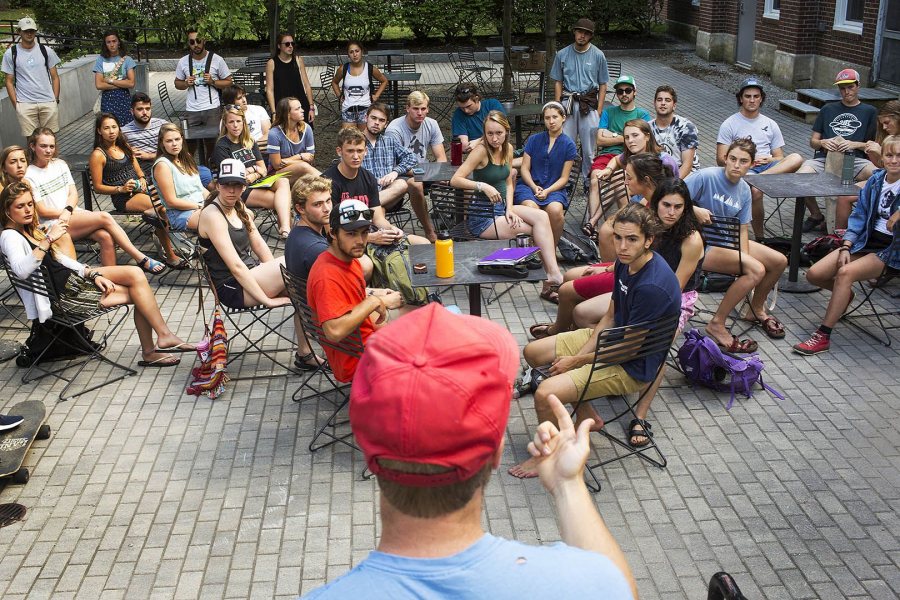 AESOP co-coordinator Kurt Niiler ’18 of Freedom, N.H., demonstrates to trip leaders how to tie a bowline knot and a trucker’s hitch knot during training outside Chase Hall on Aug. 24. (Theophil Syslo/Bates College)

Hundreds of boxes filled Memorial Commons in Chase Hall, while gear and food lined the walls. There were pots and pans and tarps and tents to sort, as well as food: 68 bottles of hot sauce, 2,061 Nutri-Grain bars, and 131 tubs of cream cheese, to name a few. Empty keytags hung on a wall, ready for keys that will fire up vans and trucks to transport students and gear all over the place. On Tuesday, leaders zipped around the room, filling the boxes.

The coordinators and leaders make sure each student feels included on a trip. Extra backpacks and sleeping bags are available for those who can’t bring their own. A variety of food accommodates different diets. The trip leaders got certified in wilderness first aid training, completed Green Dot violence prevention training, and heard presentations from college offices on Title IX and diversity in the outdoors. 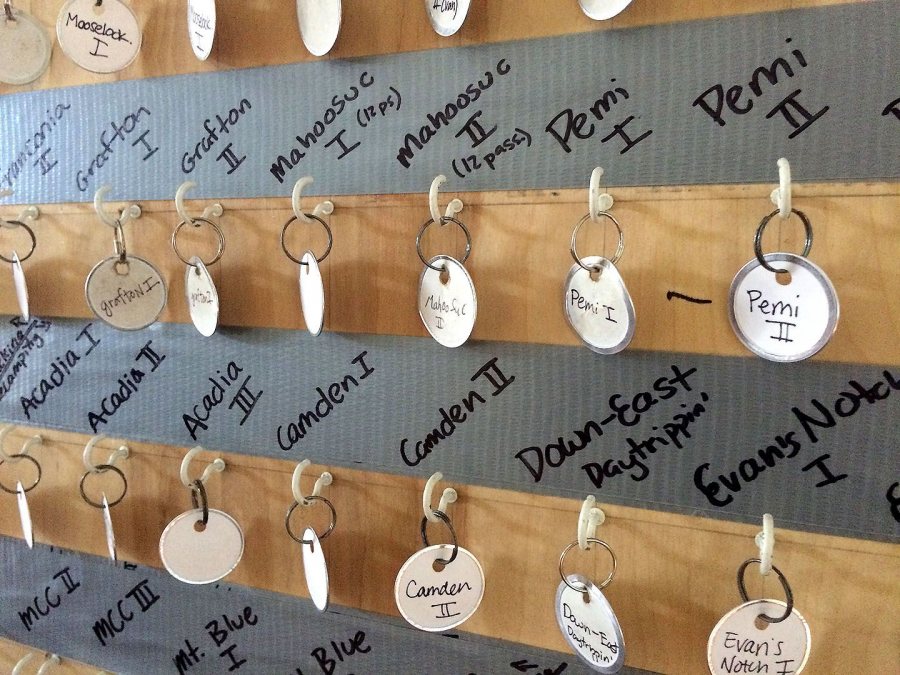 Empty keytags hang on a board in Memorial Commons below the names of various destinations for first-year AESOP trips during Orientation. The keytags will soon be filled with vehicle keys for 60 vans and trucks that will take first-years on their outdoor and service trips throughout Maine and New Hampshire. (Jay Burns/Bates College)

The trip coordinators and leaders also made sure they would be comfortable with each other. They went skating at the Rollodrome and competed in teams to earn points to win prizes. In a dessert-making competition documented on Snapchat, a tall homemade ice cream creation won 100 points. This weekend, they’ll take a trip themselves.

All so that on Thursday, when first-years leave campus, cell phones, and their own rooms behind and set out to hike, paddle, or meditate, they feel welcomed and taken care of.

“The AESOP experience in the center of the week really provides a nice break from campus,” Murphey says. “It exposes students to the rest of what we consider the extended community of Bates, which is this amazing location that we have.”

Those new friends, both under- and upperclass students, give first-years an initial social circle, critical for navigating the whirlwind of moving in, saying goodbye to parents, and starting life at Bates.

“The best part is having trips come back and being able to tell that all the AESOP’ers are super stoked,” Andre says. “They leave pretty quiet and pretty shy, and coming back, they’re all friends.”

Video: Bridget Thompson ’22 and the rule of 100 percent effort