From his third-floor office in Hathorn Hall, Robert Farnsworth, poet and senior lecturer in English, has a beautiful view of the Historic Quad.

The poet is being viewed, too. Atop a bookshelf sits a bust of Robert Frost, “presiding over everything that gets said in here,” notes Farnsworth. “He’s a sobering presence.” 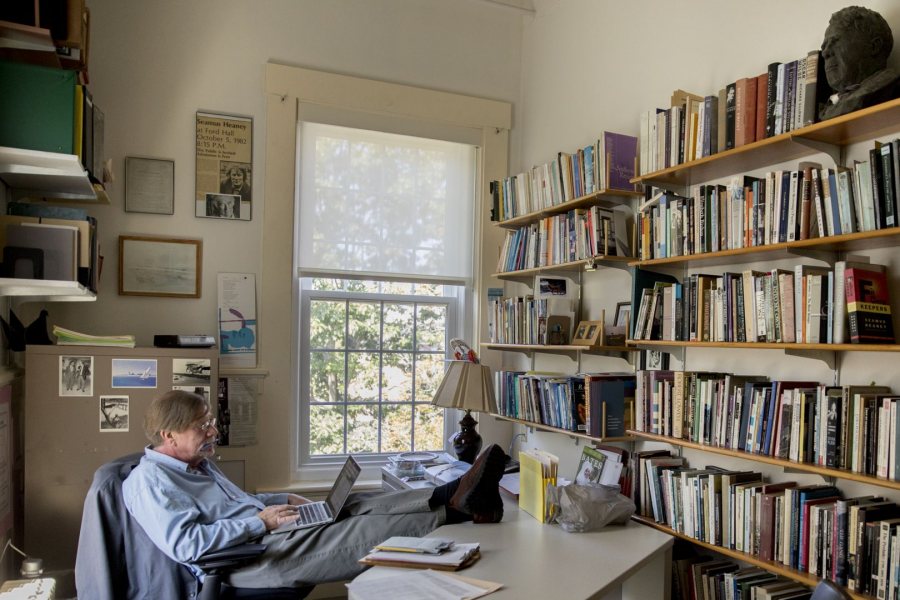 Farnsworth received the bust from a colleague who, some 20-odd years ago, was trying to clear out an office. (It’s a rite of passage for retiring faculty: Give away all that you can’t bear to trash.)

Before Farnsworth brought the head to his office, it sat in his garage just long enough for his young sons to start clowning around with it. You know what happened next. “One of them came running up the stairs saying, ‘Dad! Dad! Robert Frost’s head has fallen off!’ which I thought was an extraordinary thing.”

Farnsworth glued everything back together. Taking a bit of poetic license, he disguised the glue mark with a tiny cloth bird he found walking home one day. “He’s nestled in his collar there,” Farnsworth says. 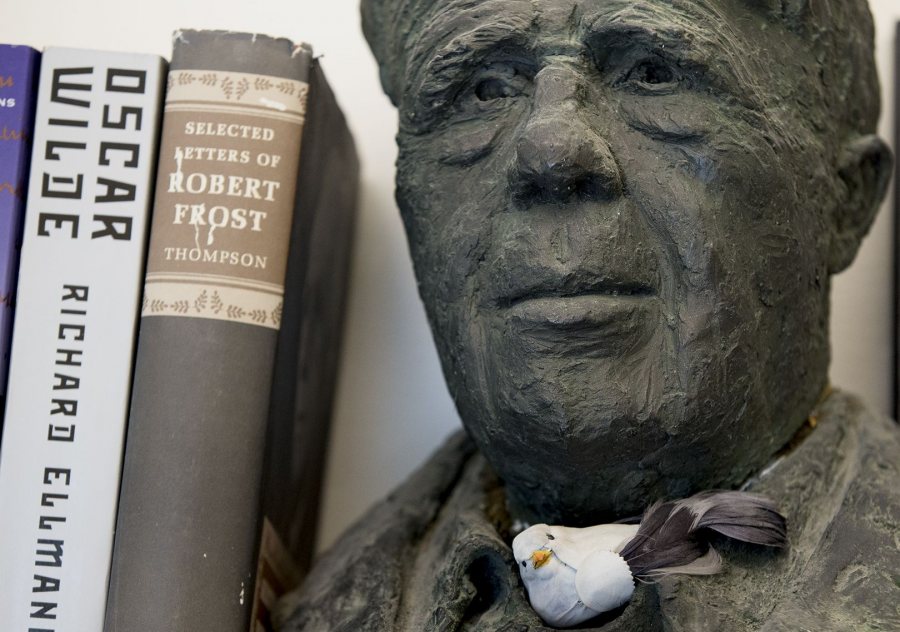 At Bates, Farnsworth teaches Frost in a course that also loops in Wallace Stevens and William Carlos Williams — “three American modernists who stayed home, rather than going to Paris or London,” he says.

Still, when Farnsworth was younger, Frost was not one of his favorites. That changed in grad school at Columbia University when he studied Frost with Caribbean poet Derek Walcott, winner of the 1992 Nobel Prize in Literature.

Also contributing to his veneration of the poet was the summer that Farnsworth spent, in 2006, living and writing in Frost’s home in Franconia, N.H.

Farnsworth now finds the poet “indispensable.” He’s come to “revere him, not just enjoy him.”

What impresses Farnsworth most is Frost’s “canniness, his slant way of getting at big truths without rhetorical flourish in a very immediate and ordinary sort of way.”

Frost had a great ear, Farnsworth says, “one of the best ears of any English poet for speech, for how people actually talk, and for the metres of prosody in English and in American English. And he put those things to work in extraordinary ways.” 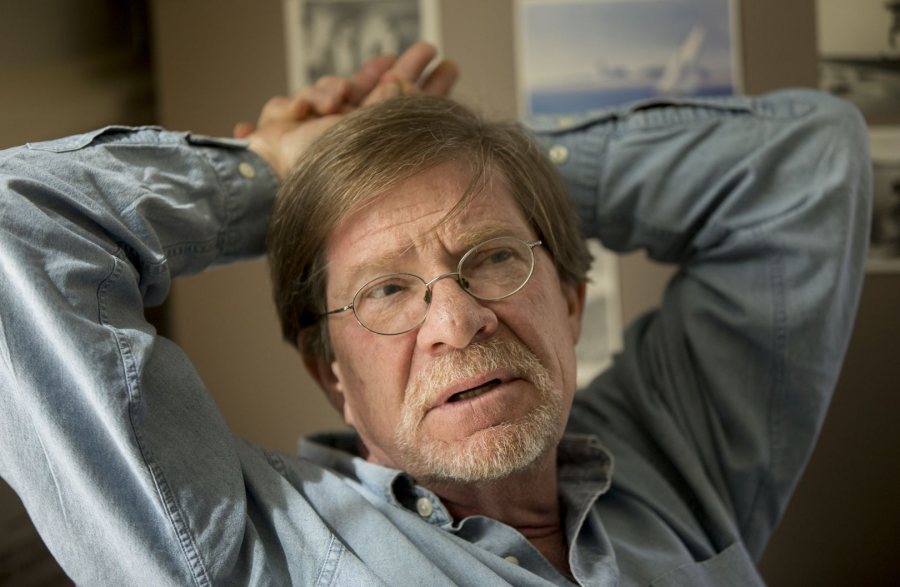 Frost has a “slant way of getting at big truths without rhetorical flourish in a very immediate and ordinary sort of way,” says Rob Farnsworth. (Phyllis Graber Jensen/Bates College)

However figurative, the bust plays an active role in the office, says Farnsworth.

“He’s a kind of presiding genius, a little tiki, you know, a Polynesian saint. He keeps an eye on me, but then these guys do too,” Farnsworth hastens to add, pointing to depictions of W.B. Yeats, Wallace Stevens, Robert Lowell, and Robert Hayden that hang on his walls.

“I try to keep these good vibrations filling up the room,” he says. “I hope that this has an influence on the students who come to study poetry.”