To be an effective leader, be prepared, speak up, and aim big, Bates panelists say

By Emily McConville — Published on October 5, 2017

As a junior employee at Microsoft, Lisa Utzschneider ’90 quickly realized she needed to find her voice if she wanted to be a leader.

She carefully prepared for meetings and made sure she spoke early and often. She took jobs that others avoided; some of the jobs, such as meeting and greeting top executives, put her in the sight of those executives. They soon knew her by name and listened to her ideas.

“Take the job no one wants, tune out the skeptics, and turn it into a success,” she told a room of Bates alumni, parents, and friends, many of them alumnae in their 20s, in Boston on Sept. 28.

Utzschneider, who held leadership positions at Microsoft and Amazon before becoming chief revenue officer of Yahoo, spoke as part of a panel titled “Women in Leadership,” hosted by the Boston Bates Business Network. 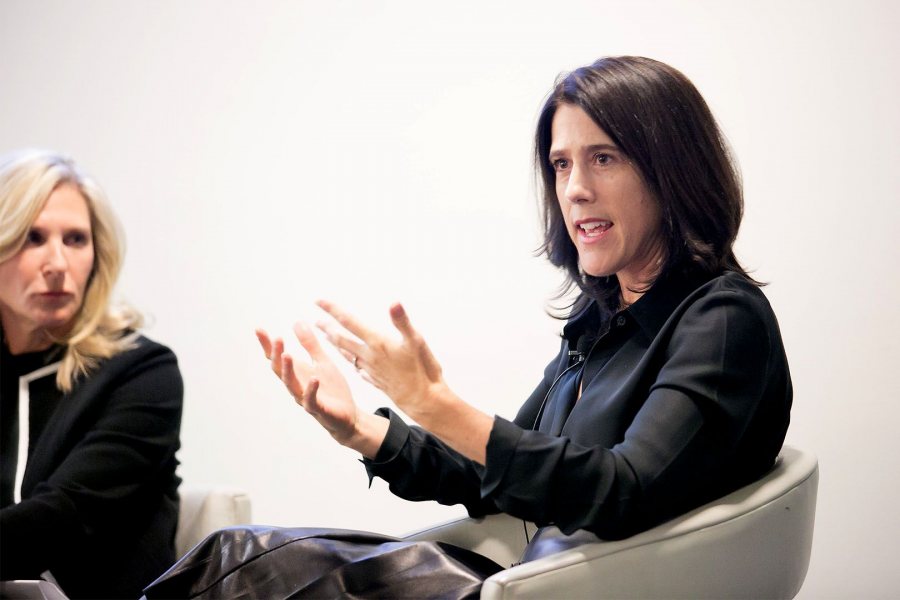 “Something I’ve really developed over time, especially when there is so much going on internally and externally, is to show up calm and consistent every day,” Lisa Utzschneider ’90 said. (Paige Brown ’96 for Bates College)

The panel, which explored how women can become effective leaders, was moderated by Jennifer Guckel Porter ’88, former trustee and current managing partner at The Boda Group. Utzschneider, who is now a Bates trustee, was joined by Peggy Koenig P’17 and Katie Burke ’03.

It was through speaking up that Burke, now the chief people officer at Hubspot, a software development firm for marketing and sales, realized she could become a leader.

Early in her career, Burke worked for a political communications firm. A potential client, she told the Bates gathering, believed that everyone in a meeting should add value to the gathering. At one meeting, which included the firm’s founders, the client pointed at Burke and said, “I want to hear from her.”

As she spoke — “I think I blacked out for a second” — she realized she had added the value the potential client sought. The company got his business, and her bosses encouraged her to do more. 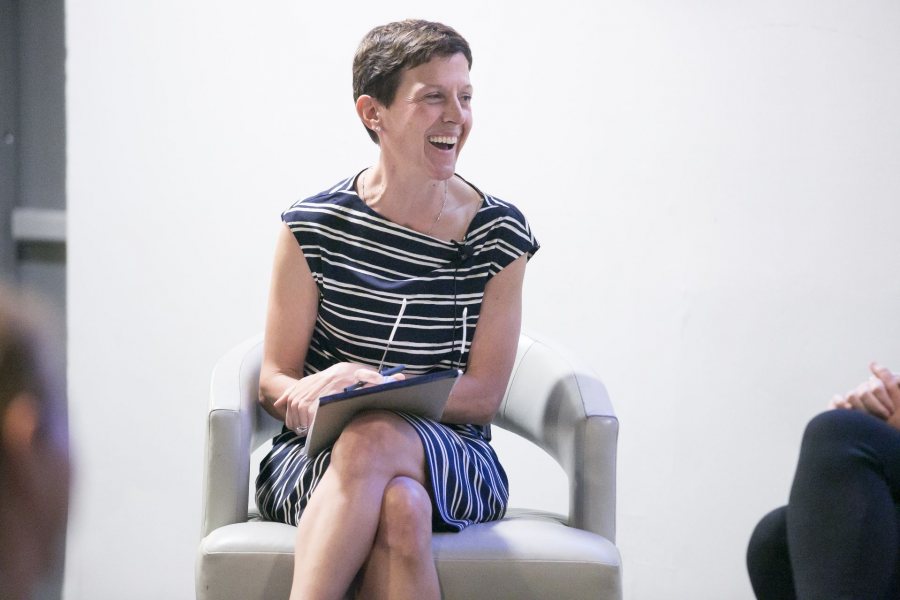 Jennifer Guckel Porter ’88 moderated the panel, which focused on how women can become effective leaders. (Paige Brown ’96 for Bates College)

“They said, ‘We are so proud of you,’” she said. “It’s a great lesson on both sides. I found my authentic voice inadvertently, and I also got great sponsorship and leadership from people who believed in me.”

Burke learned the value of preparation and curiosity. As she started and moved up at Hubspot, first in media and analyst relations and then in recruitment and employee experience, she said she read widely.

“I learn something every day that I didn’t know,” Burke said. “I pick up old-school paperback books.” 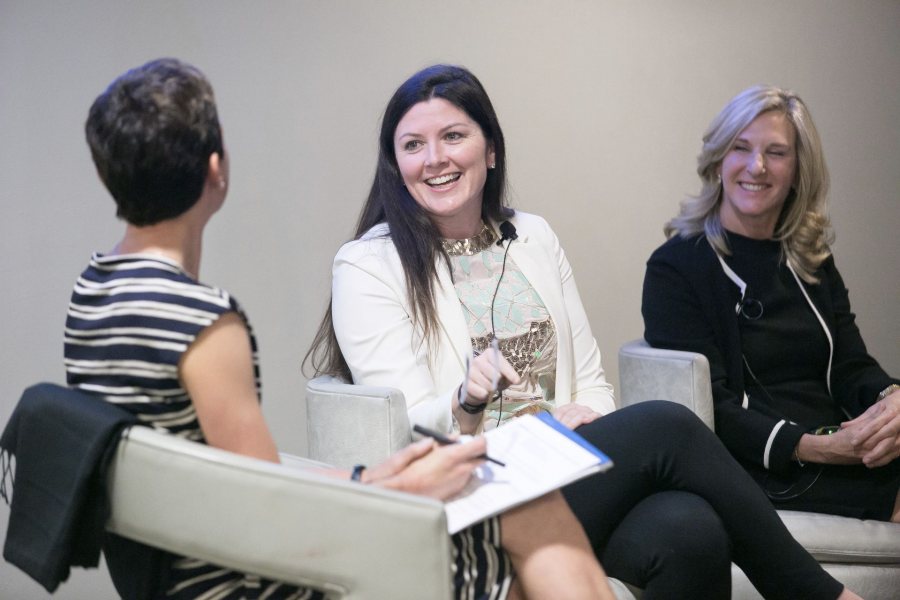 “I’m a big believer in crazy big ideas,” said Katie Burke ’03, “the power of loneliness and courage and being the person raising your hand, saying, ‘I have a really good idea, and I don’t actually care if anyone else thinks I can do it.’” (Paige Brown ’96 for Bates College)

Asked about her strength as a leader, Koenig, co-CEO and managing partner at Abry, a private equity firm, said she values helping others find their own voices.

“The title CEO means people think you’re a really scary person, so they don’t want to approach you,” she said. “I work really hard at becoming approachable so that I can help make people around me the best that they can be.”

The best advice she ever received, Koenig said, was that everyone was always watching the CEO.

“You lead by example, and that means how you act and behave and treat people is really what people are going to key in on,” she said.

Utzschneider, who started out as a junior employee at Microsoft, said her strength is leading with transparency and empathy. Those qualities became ever more important while she was at Yahoo. 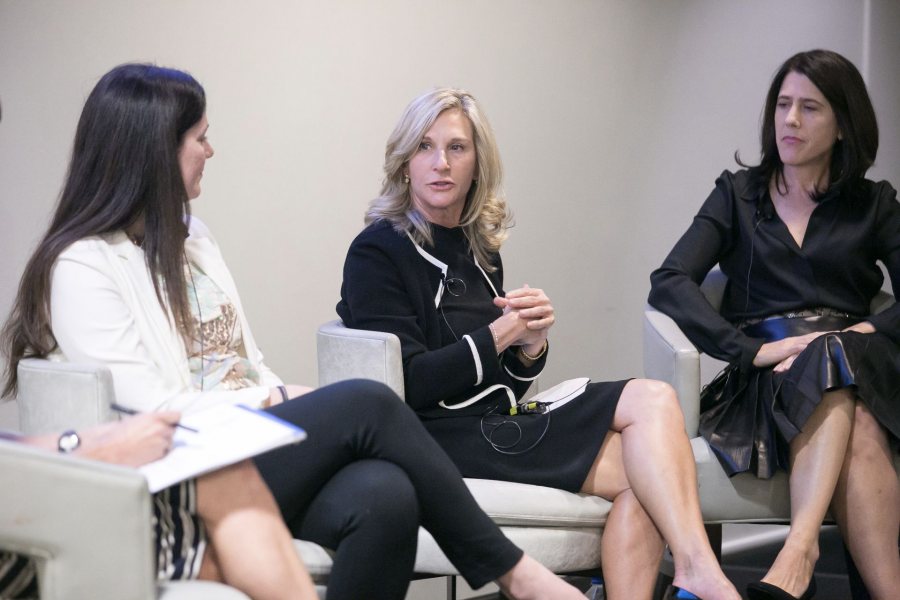 “You lead by example, and that means how you act and behave and treat people is really what people are going to key in on,” Peggy Koenig P’17 said. (Paige Brown/Bates College)

She joined the company during a tumultuous time, which ended when Yahoo was acquired by Verizon (Utzschneider left the company after its acquisition). Being a leader there, she said, reminded her of sailing, one of her hobbies. When the boat is on the water and a storm brews, everyone on the boat looks at the captain.

“If you’re calm, they’re calm,” she said. “Something I’ve really developed over time, especially when there is so much going on internally and externally, is to show up calm and consistent every day,” she said. “That’s something I’m very proud of with my team at Yahoo, because I weathered that storm with them, and we got through to the acquisition.”

Utzschneider said people often ask her for advice and mentorship. Advice-seekers, she said, should do their research, ask specific questions, and come to her with ideas and innovations.

“The more prescriptive the person is — [telling me] specifically what they need, versus a vague, ‘Hey let’s have coffee, and I’ll learn about your 20-year career’ — the more I am able to contribute and give back and do it in a way where it’s constructive and it’s not a waste of my time,” she said. 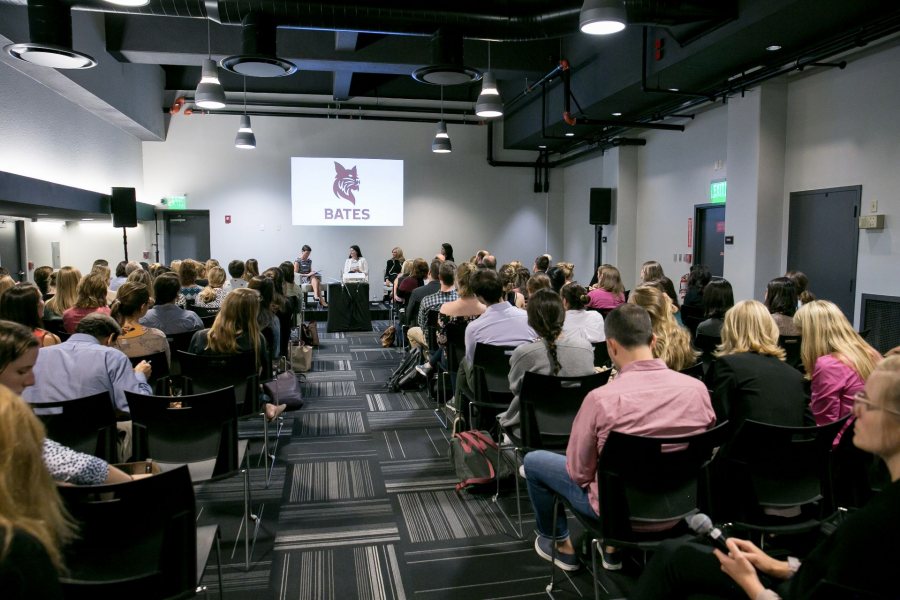 Bates alumni, parents, and friends, many of them young alumnae in their 20s, packed a room in Boston’s Revere Hotel for the panel on women in leadership on Sept. 28 (Paige Brown/Bates College)

Burke agreed that being prepared before calling upon someone for advice is paramount — but the idea of finding a mentor, one person to guide you through your career, is not. Instead, she said, junior employees should seek sponsors, a more activist concept she defined as people who can answer specific questions and create opportunities.

Employees should also see everyone as a source of knowledge.

“I want to hire people at Hubspot who are not just interested in something but have demonstrated their interests by actually doing something about it,” said Burke.

“Instead of waiting for the ‘second coming’ of the person who can teach you everything that you need to know, assume that everyone you meet knows something you don’t,” she said. “It makes your life more interesting and stops you from waiting for these big ‘aha!’ moments.”

The best way to catch a sponsor’s attention, move up in a company, or get a job in the first place, Burke said, is to show evidence of your interests. For example, if you want to go into marketing or content creation, write for the student newspaper or publish your content online.

“I want to hire people at Hubspot who are not just interested in something but have demonstrated their interests by actually doing something about it,” she said.

And, Burke said, go above and beyond. The best advice she ever received, from a baseball historian, was that aiming for a grand slam sometimes involves striking out.

“I’m a big believer in crazy big ideas,” she said, “that power of loneliness and courage and being the person raising your hand, saying, ‘I have a really good idea, and I don’t actually care if anyone else thinks I can do it.’”