Assistant Professor of German Jakub Kazecki plucks a tiny bronze medal from a shelf in his Roger Williams Hall office. The medal, says the Polish-born scholar, is a symbolic “connection between the German and the American” — and between Bates students and the wider world.

In July 2016, a Virginia woman, Cecilia Mittmann, wrote Kazecki saying she’d found a medal at an estate sale in Alexandria. Might the Bates scholar have information about it?

Kazecki, an expert in 20th-century German literature (especially about World War I), dug through back issues of The Bates Student at the Edmund S. Muskie Archives and Special Collections Library. He learned that the original Bates German Club, founded Oct. 12, 1905, produced these medals for its 16 members.

The inscription on one side of the medal reads, “Deutscher Verein zu Bates, 1905” (German Club of Bates), while the other presents a coat of arms adapted from the German empire, in which an eagle holds two symbols: one representing Bates, the other, an American flag.

Students founded the original Deutscher Verein “to give its members an opportunity to become better acquainted with German life and customs.” At its first meeting, on Jan. 18, 1906, the club initiated its charter members (men only) and elected officers. Professor of German Arthur Leonard was the club’s inaugural faculty adviser. 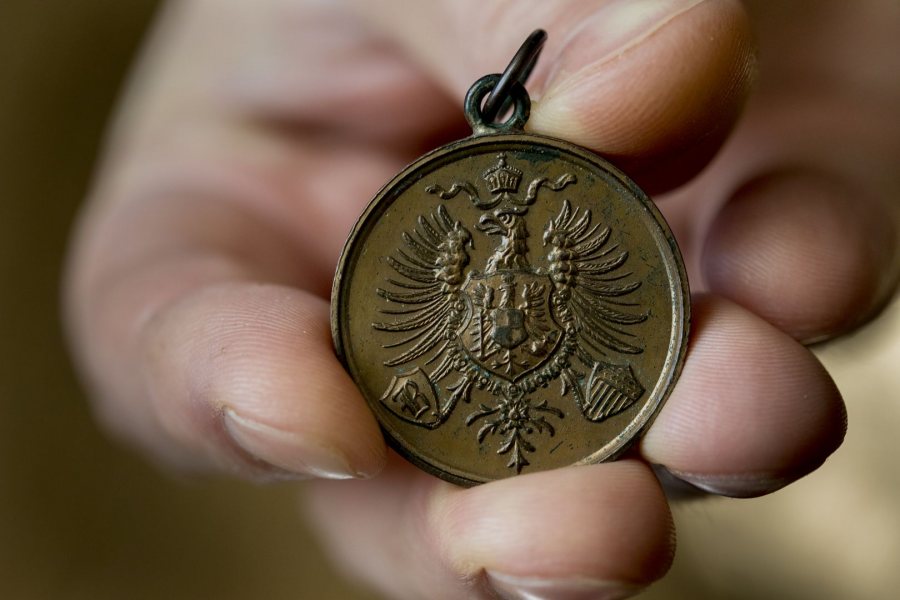 One side of a 1905 Bates German Club medal depicts the coat of arms adapted from that of the German empire, in which an eagle holds two symbols: one representing Bates, the other, an American flag. (Phyllis Graber Jensen/Bates College)

A story in The Bates Student describes a March 1, 1906, meeting at the Wood Street home of Leonard and his wife, who would accompany the students on the piano. Club business preceded socializing and refreshments, such as apples and popcorn balls. “German games were played, German songs were sung, and refreshments eaten in the German way,” the story said.

At later meetings, the club had guest speakers, such as German-born Alexander Maerze, Class of 1903, who in November 1906 regaled students for a full two hours with tales of crossing the ocean as a fourth-class steerage passenger.

When Kazecki shared what he had learned, Mittmann decided to donate the medal to the Bates German department. And for that Kazecki’s most grateful.

“The medal,” says Kazecki, “is a material piece that kind of anchors this Bates experience.”

“Students stay here for four years and explore the world,” says Kazecki, who also researches images of German-Polish relationships in literature, film, and visual arts, as well as laughter and comedy in different media.

“They graduate and start their lives. But there are pieces of material culture that they have produced here that actually bring them back to Bates, and create a Bates identity.“ 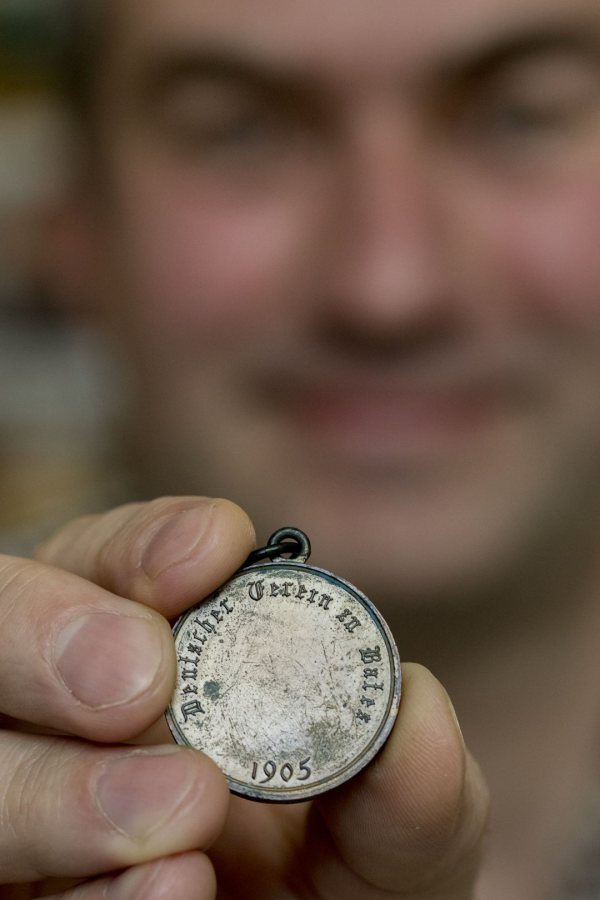 Assistant Professor of German Jakub Kazecki holds a medal given to members of the Bates German Club. On this side of the medal an inscription reads, “Deutscher Verein Zu Bates” — German Club of Bates. (Phyllis Graber Jensen/Bates College)

Kazecki likes to imagine how German Club students from the early 20th century looked at their medal often in the years after graduating and remembered the delightful meetings.

The medal also provides Kazecki’s own study and work at Bates with a little bit of institutional history. “I build my identity being here at Bates based on those pieces that I collect and gather in the office, as we all do,” says Kazecki, who advises today’s German Club. “And I think that is why it’s important to me. It’s part of my life now, and part of my own Bates identity.”

Hedge and the Bill