What I Mean When I Say: Gina Fatone and ‘utterance’

For most of us, an utterance is a spoken expression. Ralph Waldo Emerson, describing the impulse to share a religious belief, said that “if utterance is denied, the thought lies like a burden on the man.”

For Gina Fatone, an ethnomusicologist who studies the psychology of music transmission, the term is both broader and more specific: Utterances “include physical gestures as well as vocalizations of all sorts,” she says.  “They are multimodal, and can include non-linguistic thought and communication.” 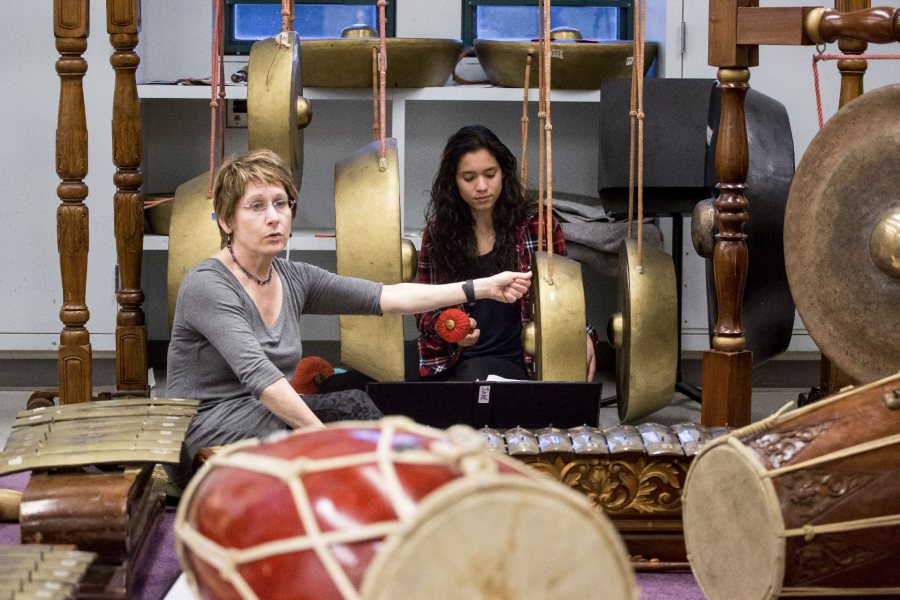 At a rehearsal of the Bates Gamelan Orchestra in February, Associate Professor of Music Gina Fatone gives cues to Jade Donaldson ’18 of Wayne, N.J.

An associate professor of music, Fatone studies how people learn to play musical instruments and the intersection of music, gesture, and cognition. Her use of the term “utterance,” she says, is borrowed from gesture studies, where it typically describes a unit of communication.

The word “utterance” gets at something we often take for granted, Fatone says: that learning to play an instrument doesn’t always involve actually playing the instrument. Conducting-like gestures — utterances made with the hands by teachers — helps musicians find a more expressive way to play, creating a neurological connection between motion and sound.

Many teachers also use metaphors to get certain sounds out of their students. “There’s the image of stretching and relaxing an elastic band to get at a more pliable rhythm, for example,” Fatone says. It’s a metaphor valuable for students who are a bit too dependent on the metronome.

Fatone shares another example: how people learn the tabla, a South Asian drum played in pairs. Traditionally, before they’re even allowed to touch the drums, tabla learners have to be able to speak what they’re going to play, using a specialized system of vocables that represent drum strokes.

From there, “their hands can much more easily utter the correct sounds on the instrument, because learning the voice of the drum with their own voice first has embedded the music in their system in a highly nuanced way that’s very salient,” Fatone says.

The utterances, in this case, are both the vocalizations — the singing — and the playing of the drums themselves.

“They can be conflated in our minds and our bodies so that we experience them as one unitary utterance,” she says.

Defining utterances more broadly, in other words, show us that music is more than sound. It’s where images, thought, and body come together in one expression.

What I Mean When I Say: Susan Dewsnap and ‘bat’