When we think of wasted food, we tend to picture the wastage happening where consumers and food meet — supermarket inventory deemed too old to sell, restaurant servings too big to finish, groceries that shoppers bring home but never eat, etc.

But a group of Bates students recently received $2,500 for a project that hopes to head off wastage at the other end of the food distribution network: perfectly good crops that farmers plow under or otherwise dispose of, usually because it’s not cost-effective to bring them to market. 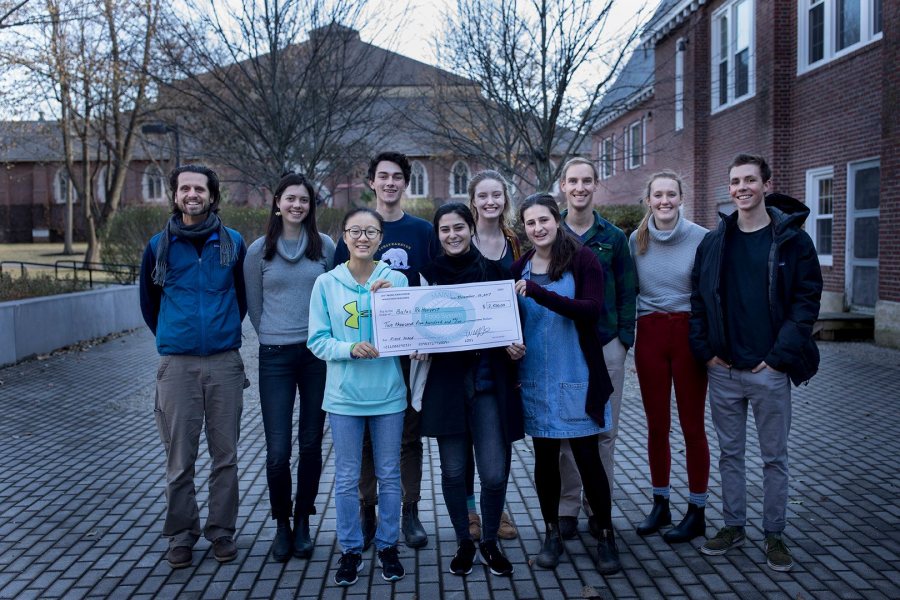 The Maine Food System Innovation Challenge, a pitch competition in its third year, made the award to the Bates team during a weekend gathering Nov. 10–12 at Saint Joseph’s College of Standish, Maine, which hosted the weekend event.

The Bates concept, dubbed ReHarvest, capitalizes on an emerging phenomenon in the food world: organizations that put together farms and volunteer gleaners — in other words, people willing to pick what farmers call the “lost harvest” — and then distribute the salvaged produce to food banks and similar relief organizations.

As the ReHarvest presenters pointed out in their pitch, Maine is one of the states most affected by food insecurity. One in five Maine children and one in seven adults contend with limited or uncertain food supplies, making the state the most food-insecure in New England and ninth nationally, according to the USDA. 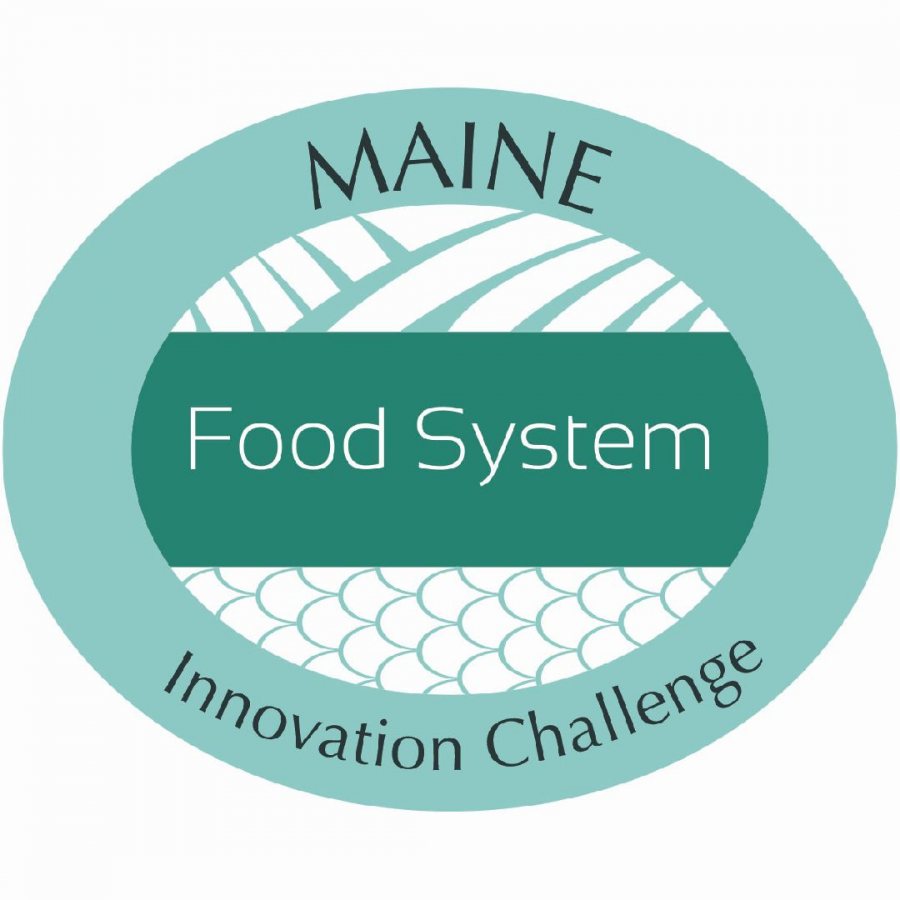 Moreover, much of the food donated to emergency providers is processed food that’s heavy in fat, salt, and preservatives — and much less nourishing than fresh produce, says one of the four ReHarvest presenters, Hermione Zhou ’21 of Shenzhen, China.

With the complementary goals of reducing lost-harvest waste and steering more food to people in need, ReHarvest will be a Web-based tool (and ultimately a mobile app) that streamlines communication among farmers, gleaners, and hunger relief organizations.

“There’s a real need to connect excess food much more effectively with people who need it,” says Francis Eanes, a visiting professor of environmental studies whose research encompasses food systems and who is advising the ReHarvest team.

Eleven Bates students are involved in ReHarvest, most of them EcoReps — students who lead and execute projects for the Bates sustainability office — and all but three of them first-years.

The Maine Food System Innovation Challenge charges its collegiate participants with envisioning ways to expand supplies of local and sustainably produced foodstuffs, while considering factors like climate change, possible uses of technology, and the need for more transparency in the food supply and distribution chain. 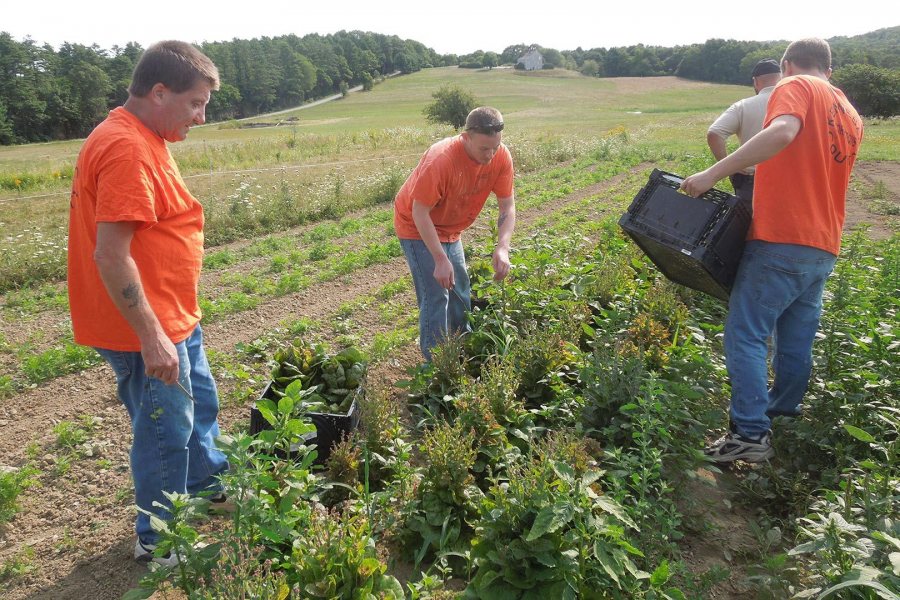 Dandelion Springs Farm in Newcastle, Maine, is the setting as Kennebec County Jail inmates pick lettuce, squash, and bok choy during 2017’s Maine Gleaning Week. The inmates had to qualify for this community service opportunity, and earned time off their sentences for taking part. (Courtesy of Healthy Communities of the Capital Area)

Farmers leave crops in the field for a variety of reasons. Sometimes they overplant a crop as insurance against bad weather. There might not be enough field hands to pick everything. And they often won’t harvest good produce that’s simply not as pretty as consumers expect.

Enter the gleaners. Organizations like the Maine Gleaning Network and Central Maine Gleaning Group dispatch volunteers to farms and orchards with crops that owners don’t plan to harvest. (Participants in this year’s Maine Gleaning Week rescued 18,000 pounds of produce, enough to make 75,000 servings.)

The gleaning organizations, in turn, distribute the recovered foodstuffs to food banks and other hunger relief organizations. In Maine, it generally falls to a few dedicated individuals and small nonprofits to coordinate the entire process.

Enter ReHarvest, “a connecting mechanism for farms, gleaners, and emergency food suppliers — something that makes it as efficient and easy as possible to connect people with each other,” says Sophie Landes ’21 of New York City, another of the presenters at the MFSIC.

Farmers could use this online tool to post crop availability, gleaners could align opportunities with their own schedules, and emergency providers could “shop” for crops to fill specific needs. 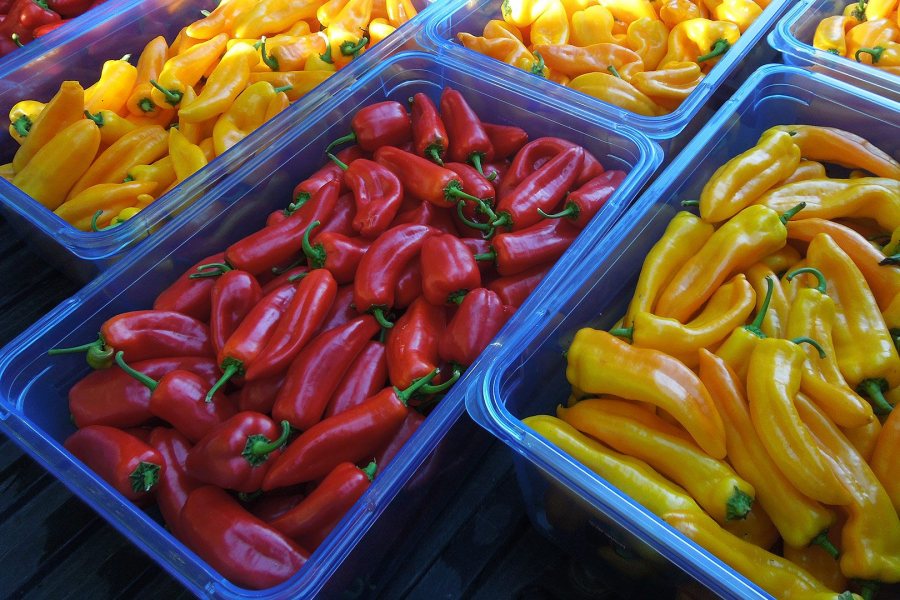 Some of the 135 pounds of organic peppers gleaned at Andrews Farm in Gardiner, Maine, during the first annual Maine Gleaning Week, Oct. 7–16, 2017. (Courtesy of Healthy Communities of the Capital Area)

The team based their pitch on what they learned from networking and research during the fall. They “really did their homework, and talked to a lot of folks who are doing this work on the ground. That gave a lot of credibility to their pitch,” Eanes says.

Before they can actually develop the web tool, hopefully this spring, the team plans to connect with some 20 farmers in the Lewiston-Auburn area, as well as with gleaning organizations and food-assistance providers. (Maine’s largest such organization, the Good Shepherd Food Bank, is headquartered in Auburn.)

Eanes also plans to assign some of the fieldwork to his “Urban and Regional Food Systems” class this winter. “When they have to get out there and talk to people whose job it is to address those issues on a day-to-day basis, it adds so much depth” to classroom learning that tends to be abstract, he says.

“There was just a lot of energy surrounding innovation in the food industry.”

The challenge was sponsored by the Institute for Local Food Systems Innovation, based at Saint Joseph’s. With the pitch presentations scheduled for Sunday, all the college teams spent a full day Saturday auditioning their pitches for a parade of experts.

Each of those 14 professionals, representing fields from law to banking to high-end groceries to food assistance, consulted with each team for 30 minutes.

“They made us think about the minute details, the mechanics of how everything would happen,” says Domi Frideger ’21 of Durango, Colo. “How are you going to transport the [gleaned] food? How long can you store it legally? What kind of laws are there around this? Are you going to be a nonprofit?”

“It was exhausting, but we learned so much,” says Liv Guion ’21 of Arlington, Mass.

And the peer networking was an added pleasure, Landes notes. “It was a pretty great experience to be with all the students from the other colleges, because there was just a lot of excitement and passion about everyone’s products and just a lot of energy surrounding innovation in the food industry.” 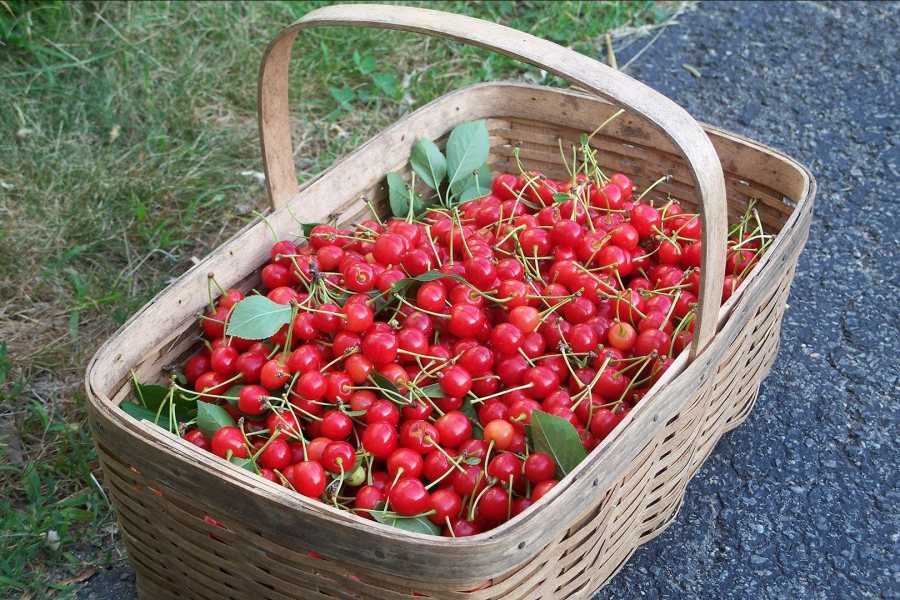