Along with the printed books and periodicals that continue to fill its seeming miles of shelves, Bates’ George and Helen Ladd Library has become home to a variety of academic support services during the past few years.

Like libraries everywhere, Ladd has expanded its role beyond the traditional temple of the book to become more of a comprehensive resource for learning. Witness the growing array of services now housed in Ladd: the Academic Resource Commons, the Writing Center, the Math and Statistics Workshop — and, as of summer 2018, the Office of Accessible Education and Student Support. 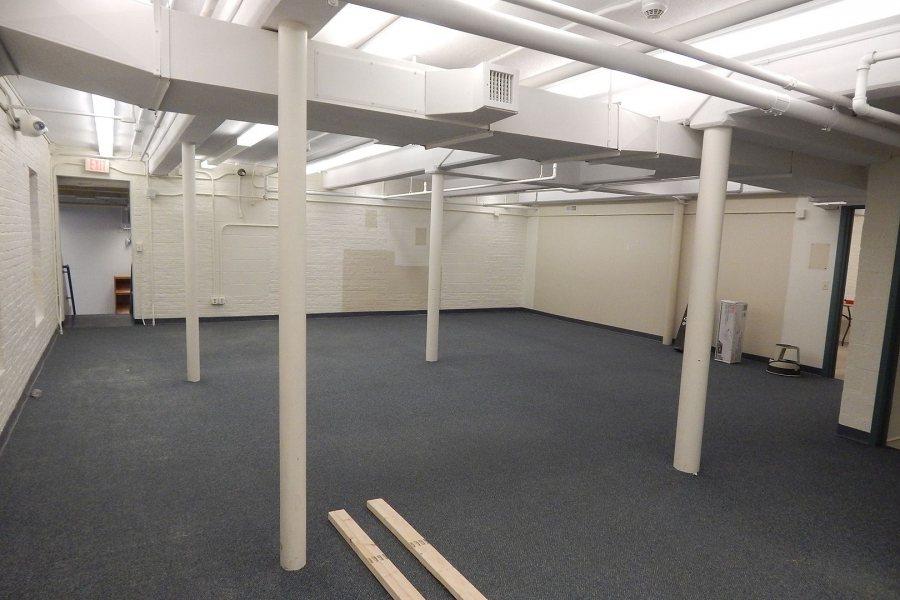 Formerly a periodicals room, this ground-floor section of Ladd Library will soon be the new home of the Accessible Education and Student Support center. (Doug Hubley/Bates College)

Established in 2015, AESS collaborates with students, faculty, and staff to facilitate equal access for students with disabilities. About 12 percent of the student body is registered with the office. But the office also serves as a resource to students more broadly, including administering the majority of make-up exams for the college.

“When a student with a disability encounters a barrier at Bates — academic, physical, programmatic, or something else — we work with them and others across campus to develop solutions, supports, and accommodations,” explains office director Abigail Nelson. (In this context, “accommodation” could mean a physical or programmatic alteration that removes a barrier.)

“And we serve as a resource to faculty and staff in regard to inclusive design practices and implementation of accommodations.” 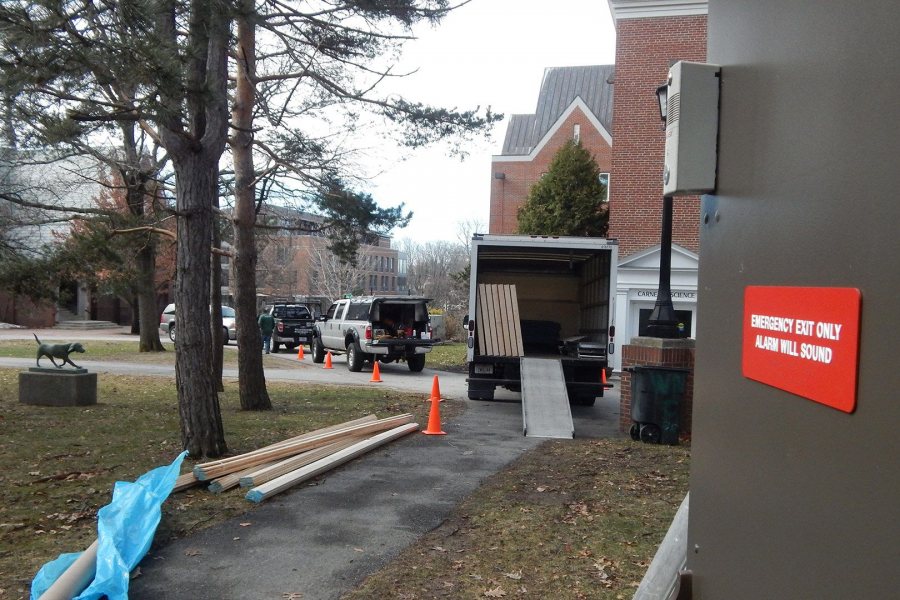 Weatherize Northeast vehicles are parked near the “Dan’s Beagle” sculpture as construction of the new Accessible Education and Student Support office begins in Ladd Library on April 18. (Doug Hubley/Bates College)

One function of AESS relates directly to its physical quarters. The office administers the majority of academic exams for students who have exam-related accommodations. But unlike its other offerings, AESS offers this particular service to students with any approved need to miss a scheduled exam — whether it’s a medical issue, personal emergency, or excused absence to compete in an away game.

“It’s a really high volume of exams,” Nelson says. And until now, they’ve all been given in a couple of conference rooms in Lane Hall.

While Nelson and AESS administrative assistant Carson Dockum have an office suite in Lane, it’s too small for swarms of test-takers and faculty dropping off test materials.

So, in addition to a couple of cubbies in Hathorn Hall, they need to reserve the conference rooms, which are shared among multiple departments in Lane. 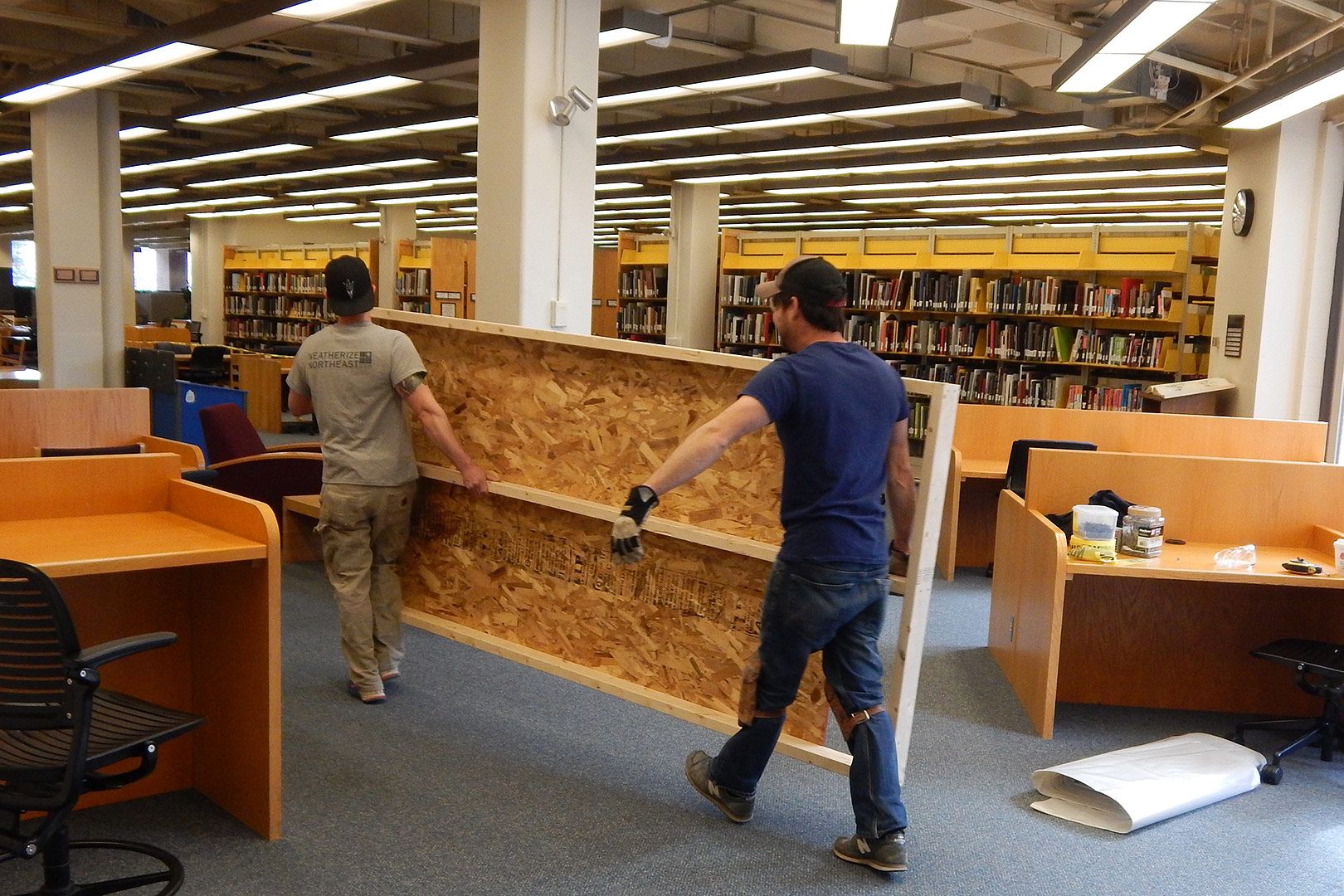 Weatherize Northeast carpenters carry a prefab temporary wall section into Ladd Library on April 18. The panel will be part of a barrier enclosing the construction of the new Accessible Education and Student Support center. (Doug Hubley/Bates College)

Hence the move to Ladd. The new AESS quarters will more than triple the office’s proprietary space, from 359 square feet to 1,268, and will comprise 13 semi-private desks and three enclosed booths for test-taking, as well as a waiting area and three offices. (Much of the assistive technology offered by AESS can be used on a laptop — for instance, text-to-speech software that reads exam questions aloud.)

The new testing center will be able to accommodate up to 16 students at once. And it’s a win for all concerned.

“Students can go to just one location to check in and sit for their exam,” says Nelson. Physical accessibility to AESS will be much improved. Staff will be close at hand for test-takers who have questions or need help. And the new digs will simply be an inviting and welcoming space.

The Ladd location represents an improvement for faculty, too. They’ll know right where their students are during an exam, and office staff will be able to keep a closer eye on the testing space. 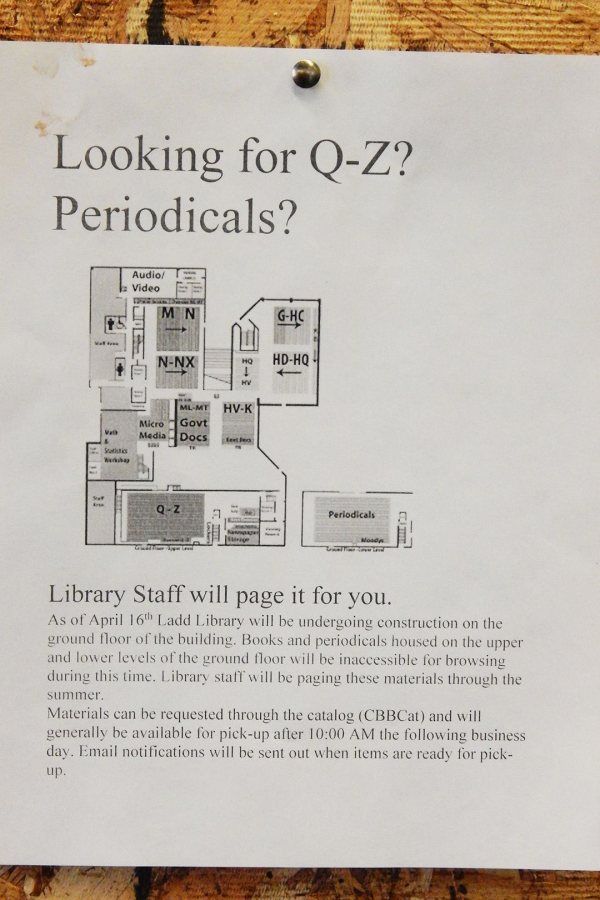 This notice posted on a temporary wall surrounding a construction site in Ladd Library explains how clients can obtain materials they need during library renovations. (Doug Hubley/Bates College)

“It will be nice to have a centralized location,” Nelson says. “It will make things much smoother all the way around. So it’s really exciting.”

She adds, “I like that our office will be one of the resources available to students in Ladd. We’re looking forward to exploring opportunities for collaboration with the Academic Resource Commons and with Information and Library Services.”

AESS is heading for the library’s ground floor, into an unusual space comprising two levels, one above and one below the surrounding floor. (Imagine a split-level house.) The two levels have housed periodicals and books Q–Z, and the lower level will retain that function following the project.

Nelson and company will occupy the upper deck, a sort of mezzanine with wall openings that afford a visual connection with the surroundings.

Because of the current construction and a second project happening this summer, clients needing any ground-level books or periodicals before Aug. 31 need to order them online and pick them up at the circulation desk. In short, Ladd staff will page the materials for you.

(Page? We initially failed to see how walking through the stacks calling a book’s name would produce results — “Paging Heirloom: Notes From an Accidental Tomato Farmer. ACCIDENTAL TOMATO FARMER!” But then we consulted a glossary of library terminology.)

Located in this region of the library, incidentally, is an access point to the basement of Coram Library. A passage frequently used by librarians as a sort of shortcut when they’re paging books, it’s the only connection currently open out of several between the two buildings — an architectural legacy that remains a topic of rumor and speculation.

Facility Services’ Shelby Burgau is the project manager for the AESS job. The project, she explains, largely entails the repurposing of what’s now an open expanse into three offices, the testing center, and so on.

“The library staff has been amazing,” making an efficient job of clearing the area and redirecting customers, says Burgau. 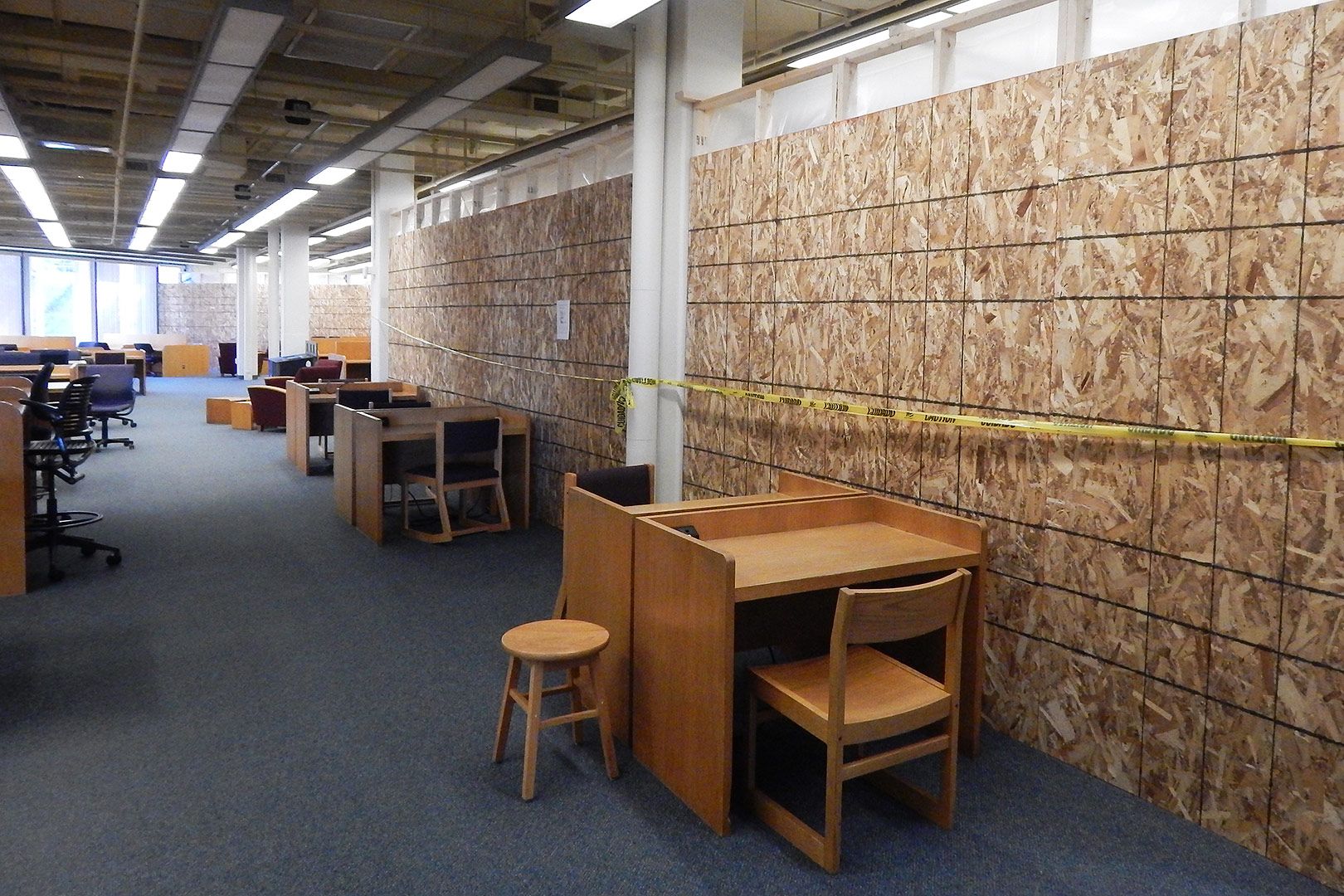 You can’t get there from here: A wood and poly barrier confines noise, dust, and disruption from the construction of the new Accessible Education and Student Support center in Ladd Library. (Doug Hubley/Bates College)

Construction work began April 18 with the creation of temporary plywood-and-poly walls to keep noise and dust in and curious visitors out. Since then, an old wall has been taken out, the new walls framed up, and electrical conduits are being run. In addition, jackhammers were brought in to remove an old concrete ramp — a task scheduled for the break between finals and Short Term, for obvious reasons. (Just another day in a library, listening to the jackhammers.)

The general contractor for the project is Weatherize Northeast of Yarmouth, Maine. “They’re the right size for the project,” Burgau says, “and we’ve had good experiences with them.”

Nelson, Dockum, and AESS should be installed in their new quarters by the end of June.

Can we talk? We crave dialogue, especially if it’s mostly about us. Send your questions and comments about past, current, and desired construction at Bates to Doug Hubley. Please put “Construction Update” or “Do library books have call numbers because they’re always being paged?” in the subject line.

Picture story: What the Bates campus looks like in a pandemic