Onions and taters and kale, oh my! — It’s the Bates Garden

The plants, seedlings really, are Red Russian kale and five varieties of tomato. Numbering in the dozens, they are thriving in the Bates greenhouse atop Carnegie Science Hall. Gillett and Katharine Gaillard ’19 of Exeter, N.H., are about to move the tomatoes to larger pots.

Even confined to their starter cells, all the plants are big, green, and healthy. As Gillett says, they are clearly poised for their own leafy Commencement: life outside the greenhouse in the new Bates Garden, where they’ll help supply Commons’ vegan station.

A quarter-acre plot near campus, the Bates garden is not the first kitchen garden the college has ever had. But it is the first designed to immerse students like Gillett and Gaillard, who will spend the summer tending the garden, in the realities of sustainable, commercial food production. 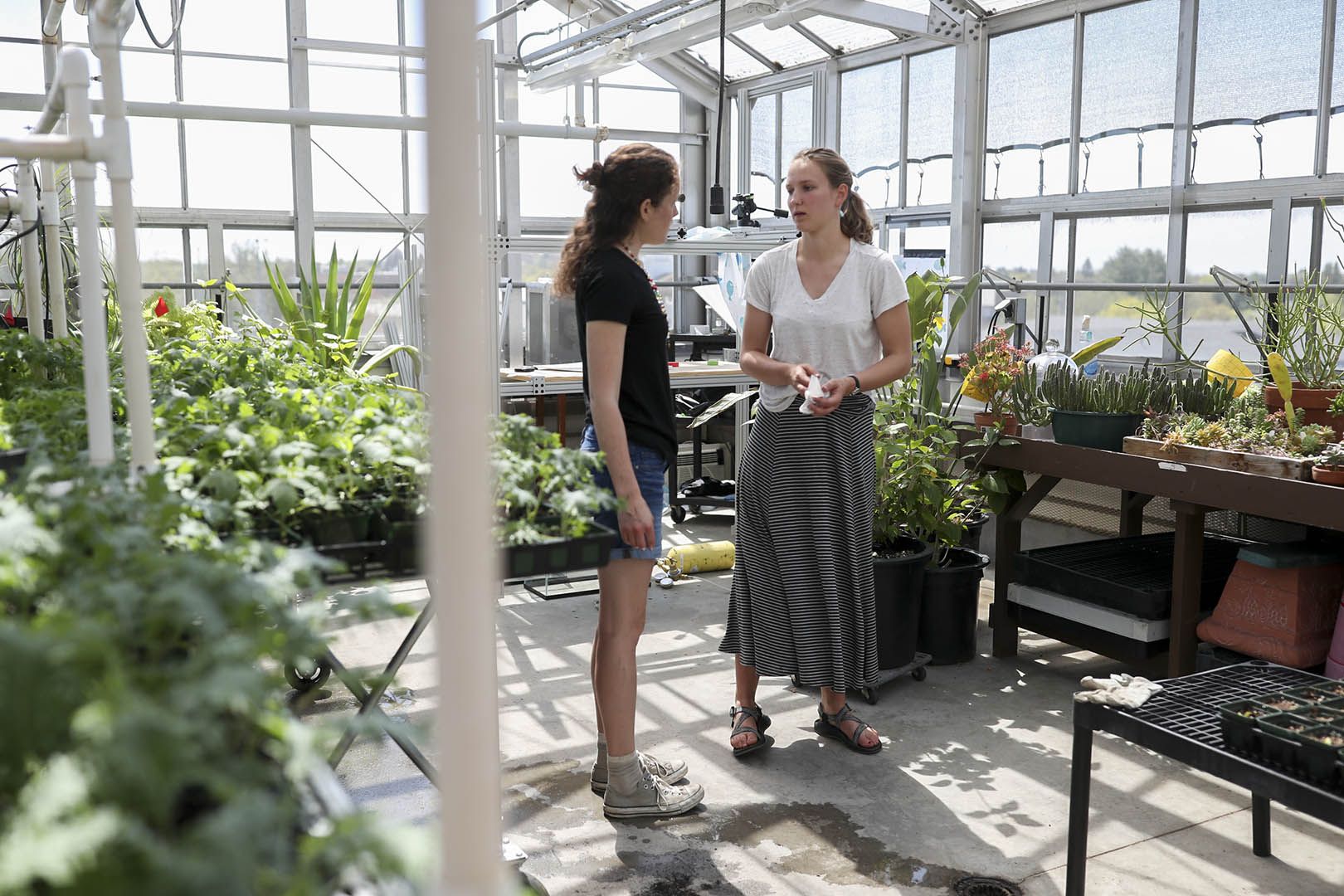 “It’s just been immeasurable how useful and supportive Dining Services has been,” says Nell Houde ’18, an environmental studies major from Meriden, N.H. Houde has been working all academic year to establish the garden, helping to organize a student Garden Club and landing a college Green Innovation Grant that funded nearly $2,000 worth of tools and supplies.

Reaping the earth’s bounty is personally and profoundly gratifying, but being accountable to others for the food you grow brings the whole business down to earth (sorry) in important ways. Routinely delivering clean, good-looking produce, in the stipulated quantities at the stipulated time, are a few of the things that separate the successful commercial grower from the gratified home gardener.

Running a campus garden that’s sustainable both environmentally and operationally, says Schwartz, “is entirely consistent with our philosophy of purchasing locally, educating the community, and reducing our carbon footprint.”

And it’s a great way for Bates to express its green ethos, Houde adds — “to have that be a selling point of the college, to actually attract potential students. ‘If you care about food, you can engage with it on campus.’” 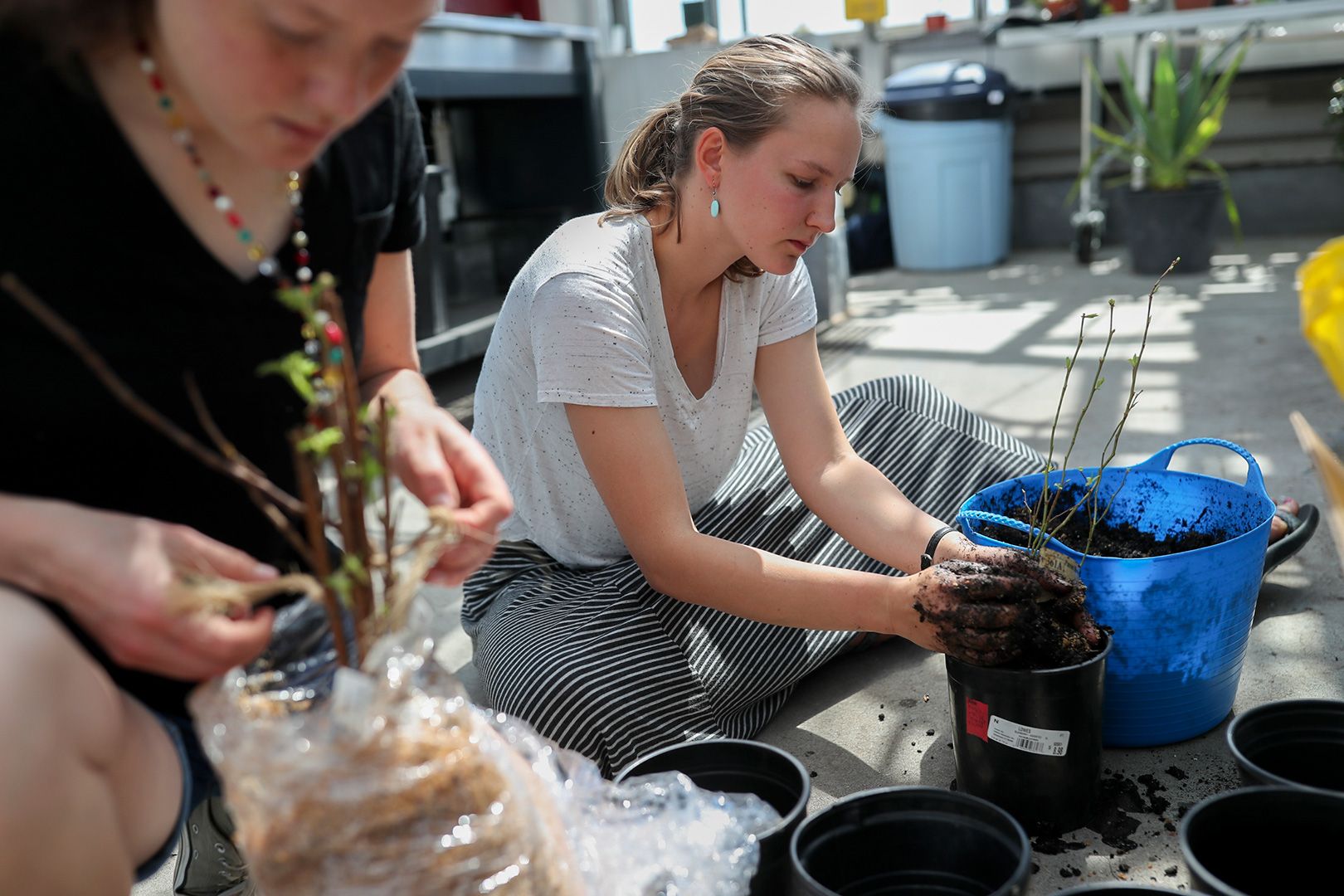 Gaillard and Gillett of Seattle pot up bare-root berry bushes in the Bates greenhouse. Blueberries and raspberries in the Bates Garden will likely start bearing fruit next year. (Phyllis Graber Jensen/Bates College)

At Dining Services’ request, Gillett and Gaillard are emphasizing tomatoes, summer squash, and cucumbers, but they’re also raising potatoes, onions, and the kale. And planting blueberries, raspberries, and strawberries that ought to bear fruit next year. (They purchased the berry bushes, onion sets, and seed potatoes from the Maine co-op Fedco, at an annual “tree sale” that’s a must-do among many Maine growers.)

Though the seedlings in the greenhouse are hankering to sink their toes into the dirt, their quarter-acre future home isn’t quite ready for them. It’s a good site — southward sloping, smoothly contoured, and, according to the Maine Soil Testing Service, adequately endowed with nutrients and free of lead and other heavy metals that would taint produce.

But there are still trees and grass to remove and beds to delineate and till. Facility Services and Phil Dostie, a handy Bates Garden volunteer and an assistant in instruction in the geology department, are helping with the bigger trees. 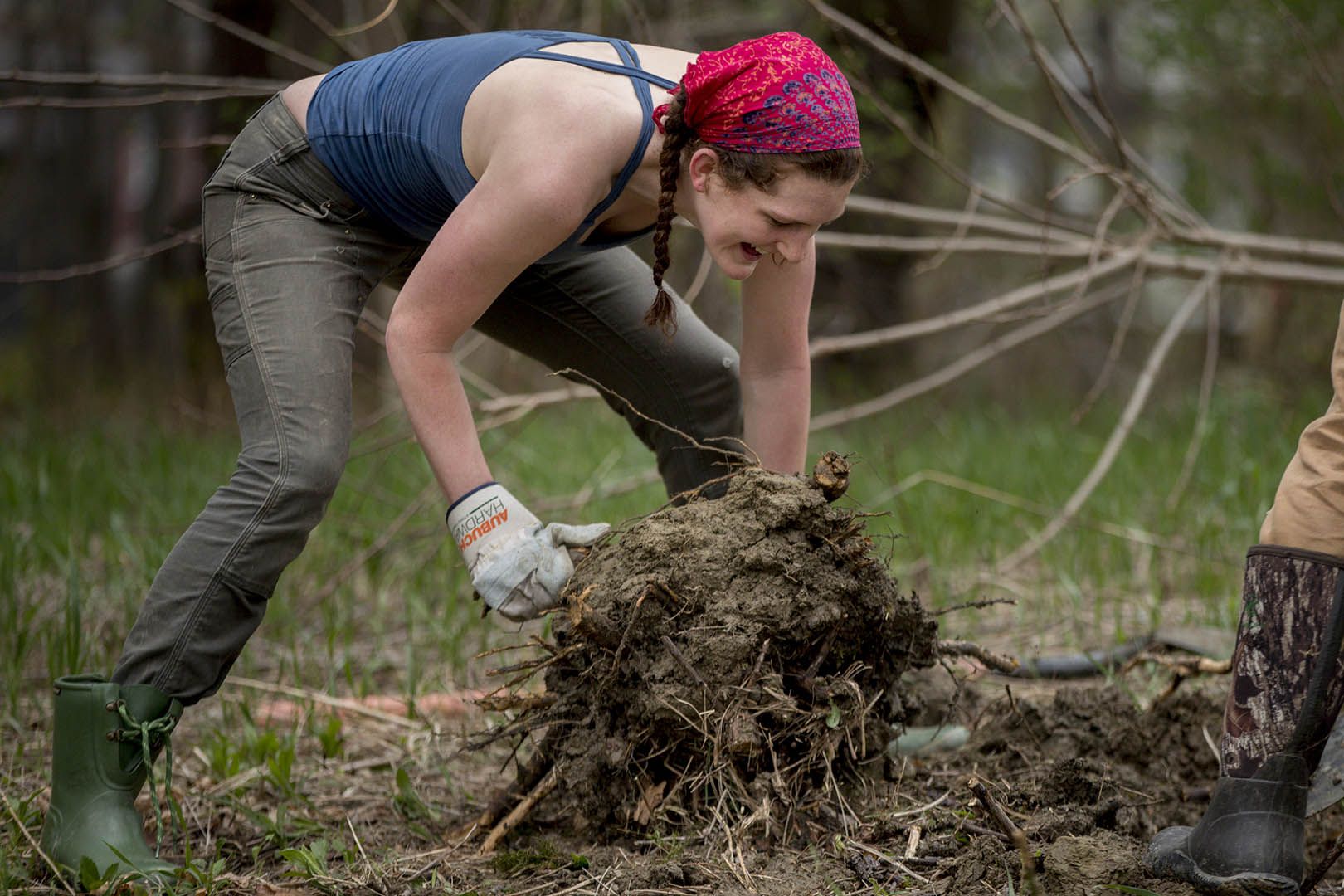 Nell Houde ’18 of Meriden, N.H., wrestles with a sapling’s removed root ball at the site of the new Bates Garden on May 6. (Phyllis Graber Jensen/Bates College)

Meanwhile, the awesome pro-environment force known as the Bates EcoReps added the garden to their project list on EcoService Day, May 6. Some 20 volunteers spent three hours uprooting saplings and carting in heavy bags of compost and other soil amendments — not to mention the little matter of making a trail to the garden, which is surrounded by trees and houses and has no direct road access.

EcoReps all, Gillett, Gaillard, and Houde were joined by more than a dozen other students; by Tom Twist, an energetic advocate for the Bates Garden who, as Bates’ sustainability manager, supervises the EcoReps; and by Francis Eanes, a visiting assistant professor in environmental studies and an authority on food systems.

During the session, the secluded garden site “went from looking like an empty space to a space that’s going to be a garden. It was really exciting,” says Gaillard, a politics major. “Even like 20 minutes in, we had a good portion of the plot cleared of saplings. It was like, ‘Wow, look what we just did.’” 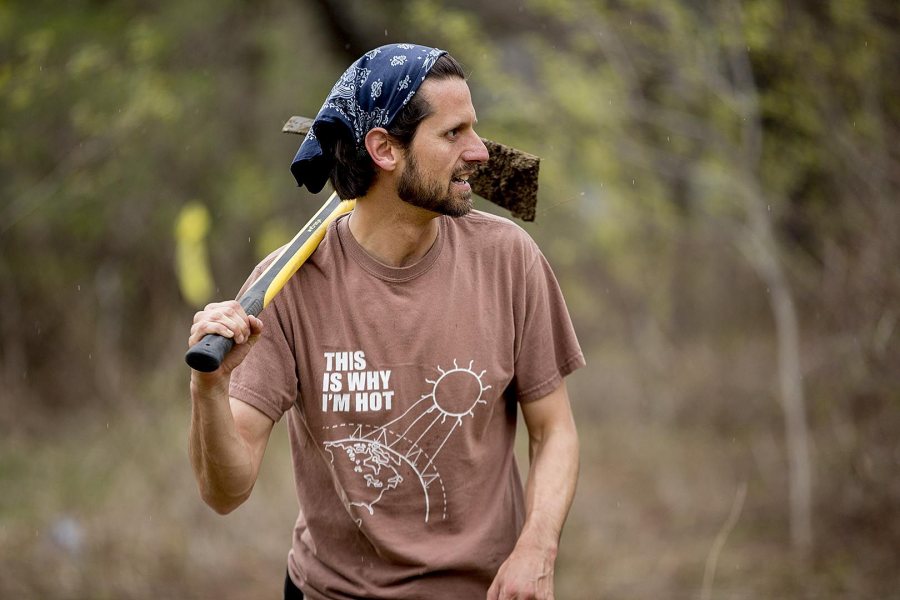 Tom Twist, the college’s sustainability manager, rests his pickaxe on a shoulder as he reviews the work at the Bates Garden on May 6. (Phyllis Graber Jensen/Bates College)

The gardeners expect to have plants in the ground by Memorial Day. And by mid- or late July, if you’re dining in Commons, watch the vegan station for the fruits of their labors. Similar to what Dining Services did last summer with vegetables from local Somali Bantu growers, explanatory signage will announce the Bates Garden goodies, says Dining Services Director Cheryl Lacey.

Schwartz has wanted a student-run vegetable garden on campus for years. In 2016, she and college landscape architect Bill Bergevin (who recently retired), approached sustainability manager Twist about establishing the Bates Garden.

A previous vegetable garden, over on College Street, failed to attract enough student interest to succeed. This time, Schwartz and Bergevin wanted to ensure student buy-in for the garden, and they saw EcoReps as a means to that end.

Twist was all for it, especially the principle that the student gardeners be accountable partners in Dining Services’ supply chain. “We want it to educate students on how to do a productive garden,” says Twist, “not a pie-in-the-sky type of thing.

“So the fact that Dining is so enthused about this is a big deal.” 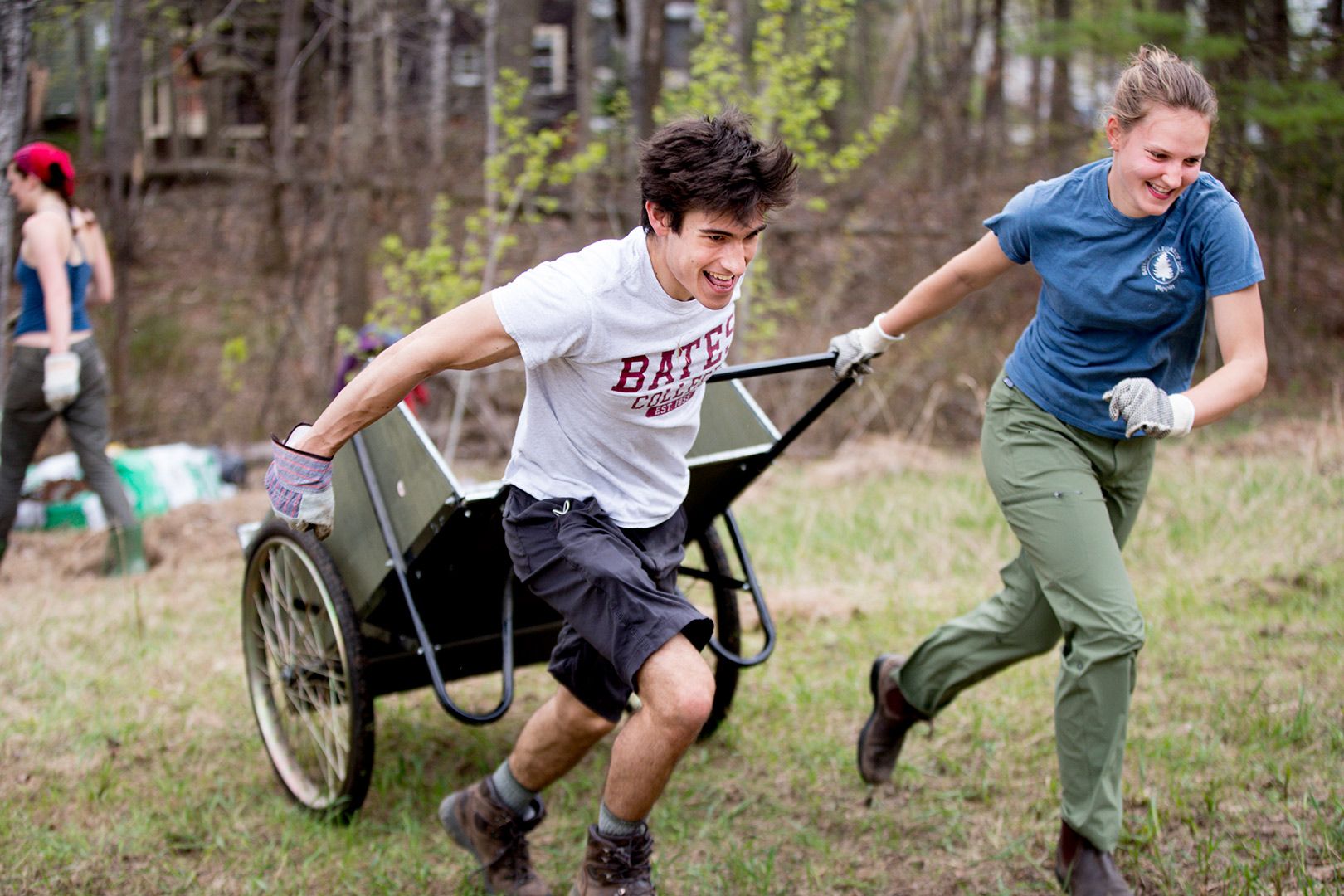 Aidan Denahy ’21 of Irvington, N.Y., and Gillett haul a cartload of compost uphill as they help prepare the Bates Garden site during an EcoService Day work session on May 6. (Phyllis Graber Jensen/Bates College)

It’s true that in terms of food produced, the return on Dining Services’ investment of dollars and staff time in the Bates Garden will be minimal. Schwartz points out that where the previous Bates garden could produce 12 pounds of bell peppers in a growing season, Dining Services uses 43,000 pounds of peppers in a typical year.

But, after all, education is the garden’s most valuable product, not pecks of peppers, especially at a college nationally recognized for anticipating its students’ need for meaningful work after graduation. And if cultivating real-world agricultural skills is one objective of the garden, there are others, as Eanes points out.

The garden could provide multidisciplinary learning opportunities “around soil, production practices, marketing, design, ecology, etc.,” he says. It could even serve as “a tool for initiating broader conversations at, and beyond, the college about the role of institutions in supporting a viable regional food system.”

Gaillard, Gillett, and Houde are reveling in these loftier possibilities for the Bates Garden, especially its potential for raising student awareness of sustainable food sourcing. “Having a high interest in sustainable food and a passion for how that can bring people together, this is really exciting for us,” says Gaillard.

But in the meantime, these experienced gardeners are laying out beds, spreading Coast of Maine compost, wondering about succession plantings and what to grow come autumn — and waiting to see what the Bates Garden’s first growing season will provide.

“It’s fun,” says Houde, “because gardening is the epitome of forcing you to trust the process and give up a little bit of control. 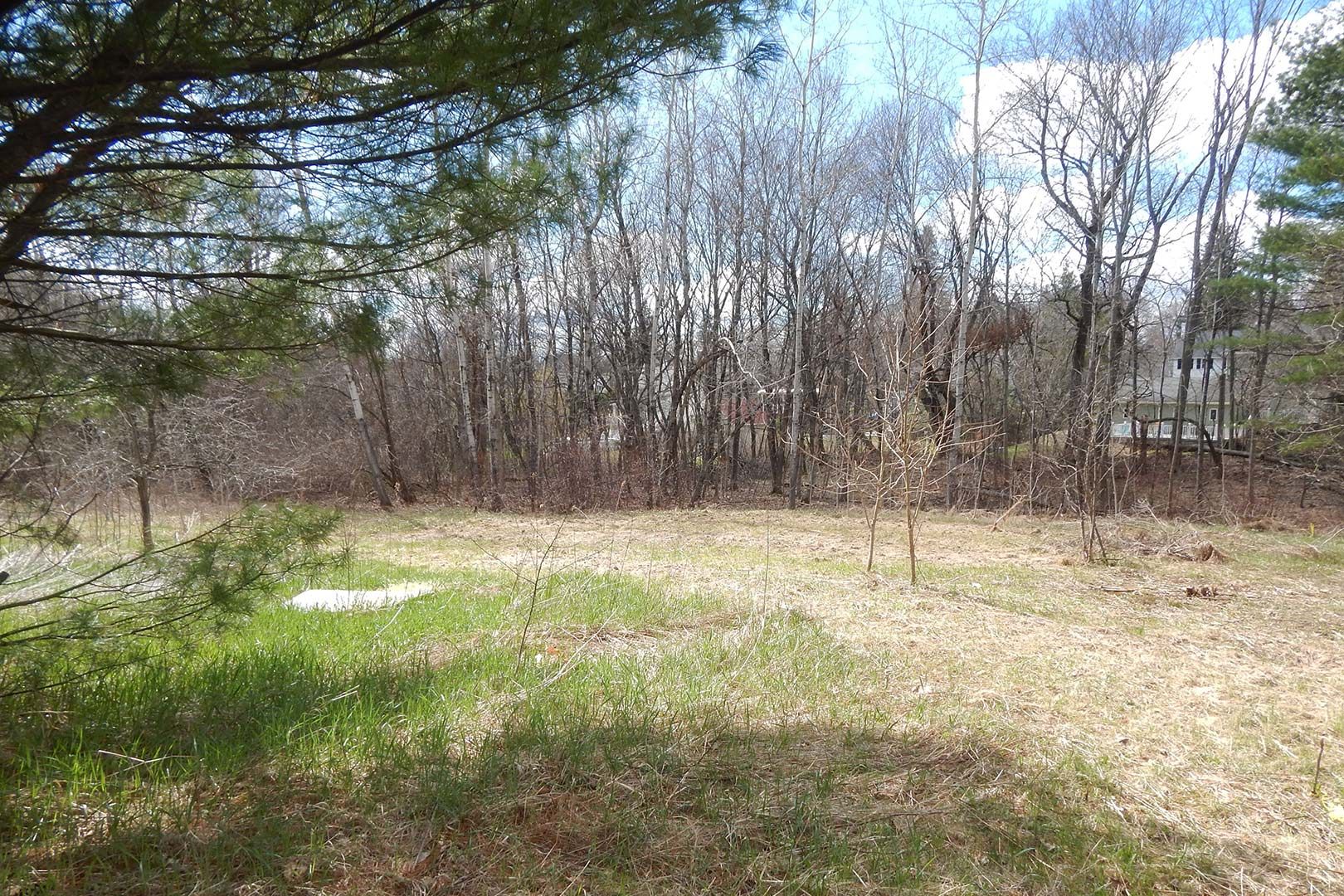 The Bates Garden site in early May. (Doug Hubley/Bates College)