A day in the life of a Short Term in London

On May 3, Professor of English Sanford Freedman, 14 of my classmates, and I landed in London for our Short Term course, “Shakespeare in the Theater.” Since then, we’ve immersed ourselves in the world of Shakespeare in the place where he lived, enjoying performances at the Shakespeare’s Globe theater and in the playwright’s hometown of Stratford-upon-Avon. 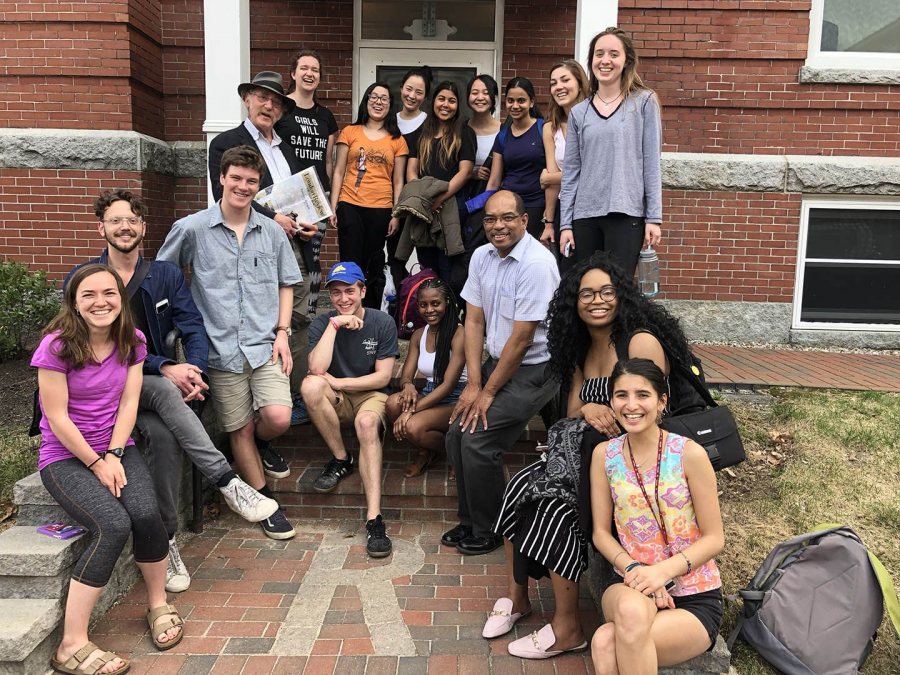 Here is our class, just before we left campus and just after we rearranged our luggage to meet the weight requirements for the flight. I am on the far left, ready to head to the U.K. for the first time. (Jay Burns/Bates College)

But London, of course, is not just Shakespeare. When we’re not reading, watching, or recreating the Elizabethan age, our days are chock full of exploring the world of Charles Dickens or traveling to other British cities.

Here’s an example of just one of those days, May 7, to show how we take advantage of all a Short Term in London has to offer.

Every morning, we have the option to meet for a breakfast buffet of eggs, fruits, baked beans, and breads at a restaurant in our hotel. The line, or as the English say, queue, for this breakfast spirals down to the lobby by 9 a.m., so I like to meet up with fellow students early to grab a spot. Having this breakfast helps us save pounds for lunch and dinners and fuel up for our discussion of Shakespeare texts and performances.

After breakfast, we all meet in the lobby to walk the short distance to our “classroom” — the British Museum! Once we’re sure that Sanford has his hat and that we have our books, we follow Sanford to an array of tables set up outside the museum entrance. What better way to study Shakespeare than outside one of the most famous museums in London!

And what better person to study Shakespeare with than our professor, Sanford. He’s taught this course several times, so he’s been helpful not only with reading plays but also navigating the city — and both are often accompanied by his own stories. 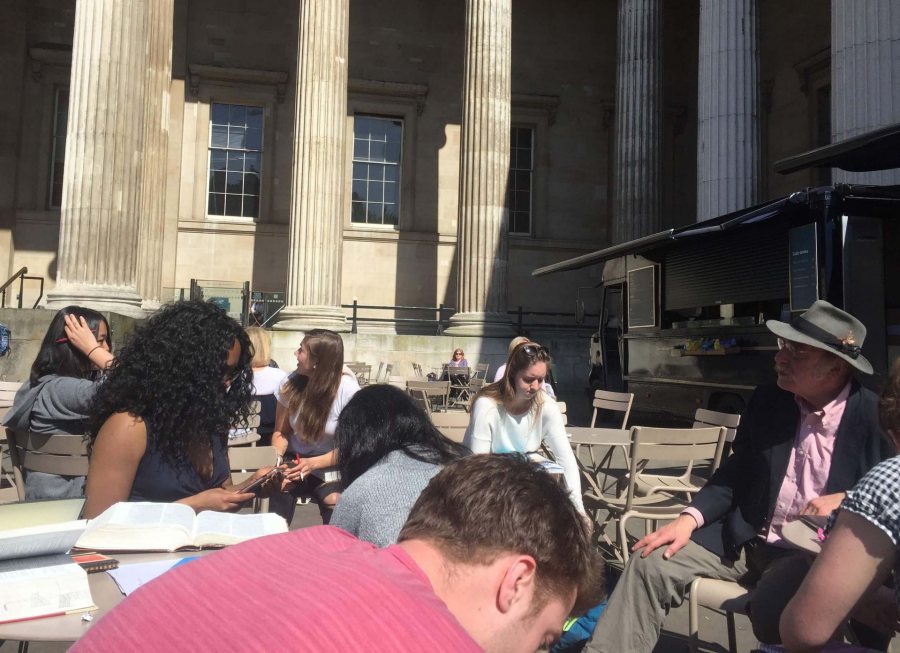 Our “classroom” each morning is outside the British Museum in the heart of London. (Sarah Rothmann)

In today’s class, we compare the text of As You Like It to a theatrical adaptation. Our analysis is based on the text that we read before arriving in London and on the performance we saw at the Globe last Friday. We bring up points about narrative style, costuming, casting, and instrumentation; all of these elements of theater will help spark ideas for our final 10-page papers.

After class, we’re free to explore London. We disperse to different areas of the city to appease our interests for the day: It could be Trafalgar Square, where we have an assignment to analyze art in the National Gallery; or Westminster Abbey; or the impressive façade of Buckingham Palace.

When we have entire days free, we expand to other parts of the United Kingdom. In just a week, trains have carried us to Cambridge and Brighton. The city of London and, more broadly, the United Kingdom have become our campus to explore. 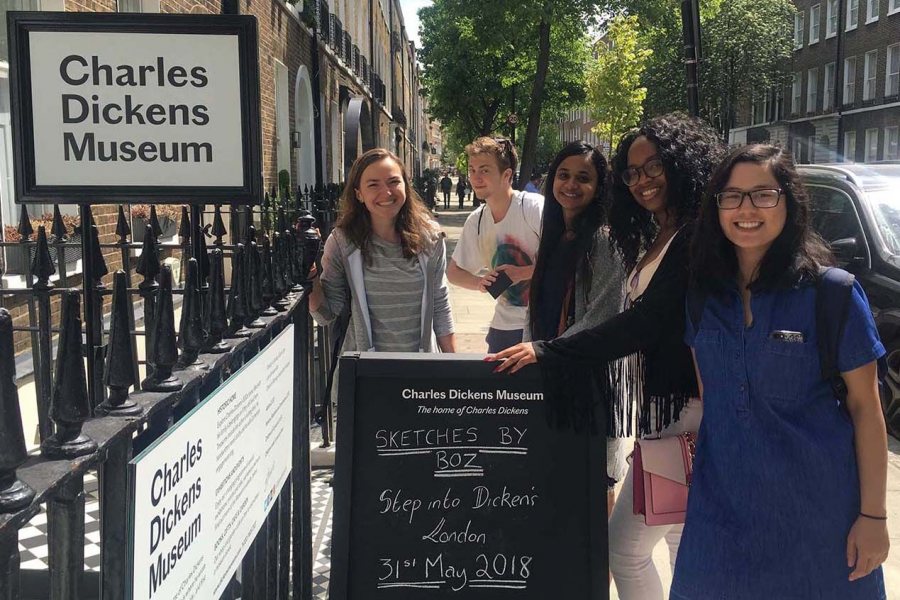 Some classmates and I spent part of the afternoon at the Charles Dickens Museum, housed at the author’s London residence. From left, there’s me, Ted Burns’19, Sukanya Shukla ’20, Alex Onuoha ’20, and Eha Joshi ’20. (Courtesy of Sarah Rothmann)

This particular afternoon, I visit the Charles Dickens Museum with five classmates. The museum was built to present the rooms of Dickens’ London house on 48 Doughty St. As I walk through rooms of the house where the great author lived, I feel as though I am transported into the Victorian era. I particularly love the study, because I am able to see Dickens’ letters, a library of his novels that he saved as gifts, and the desk where he wrote Oliver Twist.

I also walk through an exhibit focused on Dickens’ childhood, complete with the bottles and tokens that he used as a child at Warren’s Blacking Factory. As I begin to write my senior thesis on Dickens’ autobiographical fiction, I can incorporate facts that I learned from each of these rooms.

On the walk back from the Dickens’ museum, Eha Joshi ’20, Rio Fujii ’21, and I take a detour to another house-turned-museum, Sir John Soane’s Museum. Soane was an extraordinary architect and collector who provided tremendous contributions to the British Museum, but he kept plenty of items for his own home. My favorite part of the museum is its beautiful Egyptian sarcophagi.

Before heading off to the Globe for tonight’s play, we reconvene in the hotel lobby. Once Sanford is sure that everybody is present, he puts on his hat and leads us to the Tottenham Court Road Underground station. The sound of the train arriving forces us to sprint so that we can catch our ride to the Globe. We scramble to our seats and watch as Sanford barely makes it on board!

The Tube brings us to St. Paul’s station. From here we walk along the cobblestone paths outside St. Paul’s Cathedral — though we managed to outrun Sanford onto the Tube, now, as usual, he’s several steps ahead of us. To keep track of him, we all just keep an eye out for his hat and blue-and-green sneakers.

We cross a beautiful bridge overlooking not only Shakespeare’s Globe, but also other major landmarks of London, such as the notorious Tower Bridge. 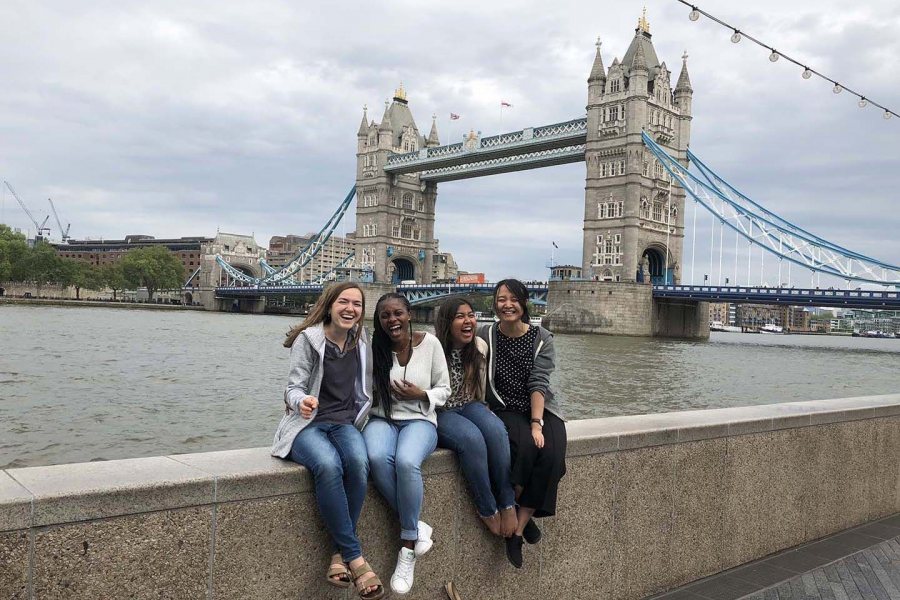 Rio Fujii ’21, Mamta Saraogi ‘21, Doris Etienne ’20, and I try to pose in front of the distinctive Tower Bridge, not far from the Tower of London and Shakespeare’s Globe. The more recognizably named London Bridge is half a mile away. (Sarah Rothmann)

We finally arrive at the Globe and are immediately transported back into Shakespeare’s Elizabethan Age! The outdoor stage resembles the original Globe Theatre that was built in Southwark, London, in 1599. We’re seeing Twelfth Night, which we read during spring break and discussed during the first week of Short Term. Our job now is to compare and contrast elements of the text to the theatrical production.

Some of our tickets are for the oxymoronic “standing seats,” which means we stand in an open area in front of the stage — the same setup used in original Shakespeare performances. Although the standing seats are hard on our feet and backs, they provide the best theatrical experience. 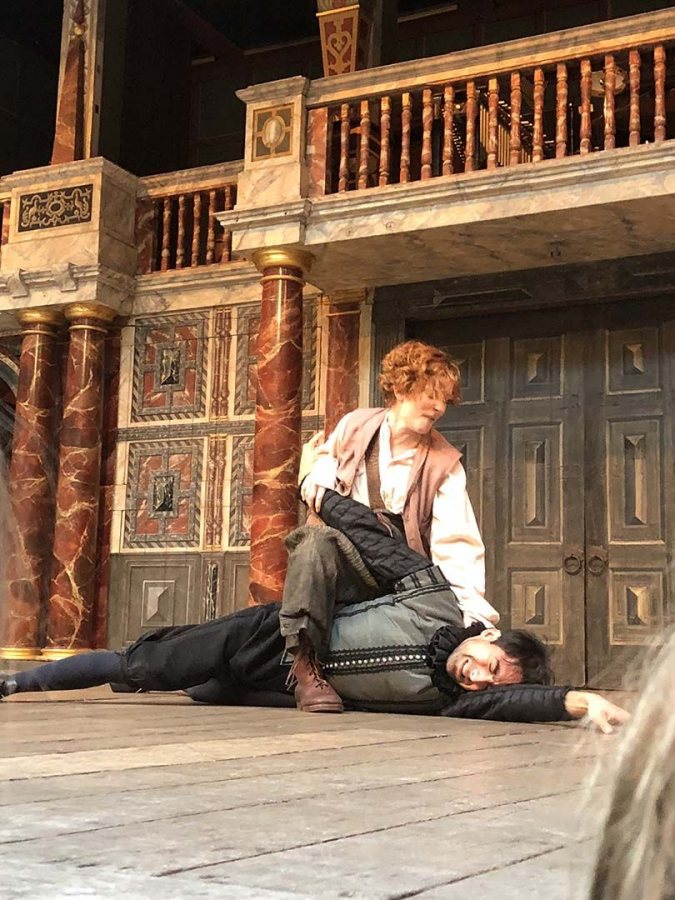 In our standing seats, we can see the action up close. (Courtesy of Sarah Rothmann)

The actors, wearing basic white shirts and pantaloons and playing musical instruments, start the performance weaving through the right and left-hand aisles of the theater. I don’t even realize that they are the actors of Twelfth Night until they reach the stage and quickly change into their Shakespearean costumes. Each actor and actress plays several roles throughout the performance. The actor who plays Malvolio, for instance, is also Antonio and a priest.

The use of vocal, brass, and stringed instrumentation is central to this production. For example, the Duke signals his delivery of the first line, “If music be the food of love, play on,” with the sound of a trumpet. Another character, Feste the clown, uses his vocal talent to drive the narrative of the play through the five acts. The conclusion of the performance features more music and some dance.

Once the performance is over, we all gather outside the theater and discuss our initial reactions. Everybody agrees that the Fool was the most likeable character in the performance and had an outstanding voice! Then we retrace our steps to the Tube station and make our way back to the hotel.

After exploring different parts of London and standing through a three-hour Shakespeare play, our backs and feet are slightly achy. Rest is key, because we have several more performances at the Globe, Barbican, and Stratford-upon-Avon theaters ahead of us!