To do research at the extreme north or south of the planet, you need a good enough project to get funding from the National Science Foundation or another government agency. You also have to be organized, independent, and technically excellent.

“You have to be able to work alone, be flexible, have a plan and be willing to change it,” says Professor of Biology Will Ambrose, who studies life on the Arctic Ocean floor. “That’s what I tell my students.”

Before they attached video cameras to whales, drilled through 15 feet of ice to lakes below, or tracked ancient glaciers, the Bates alumni who conducted Antarctic research in recent months benefited from the same education available to all Bates biology and geology majors — one that involves plenty of fieldwork and close collaboration with professors who involve students in their own research. 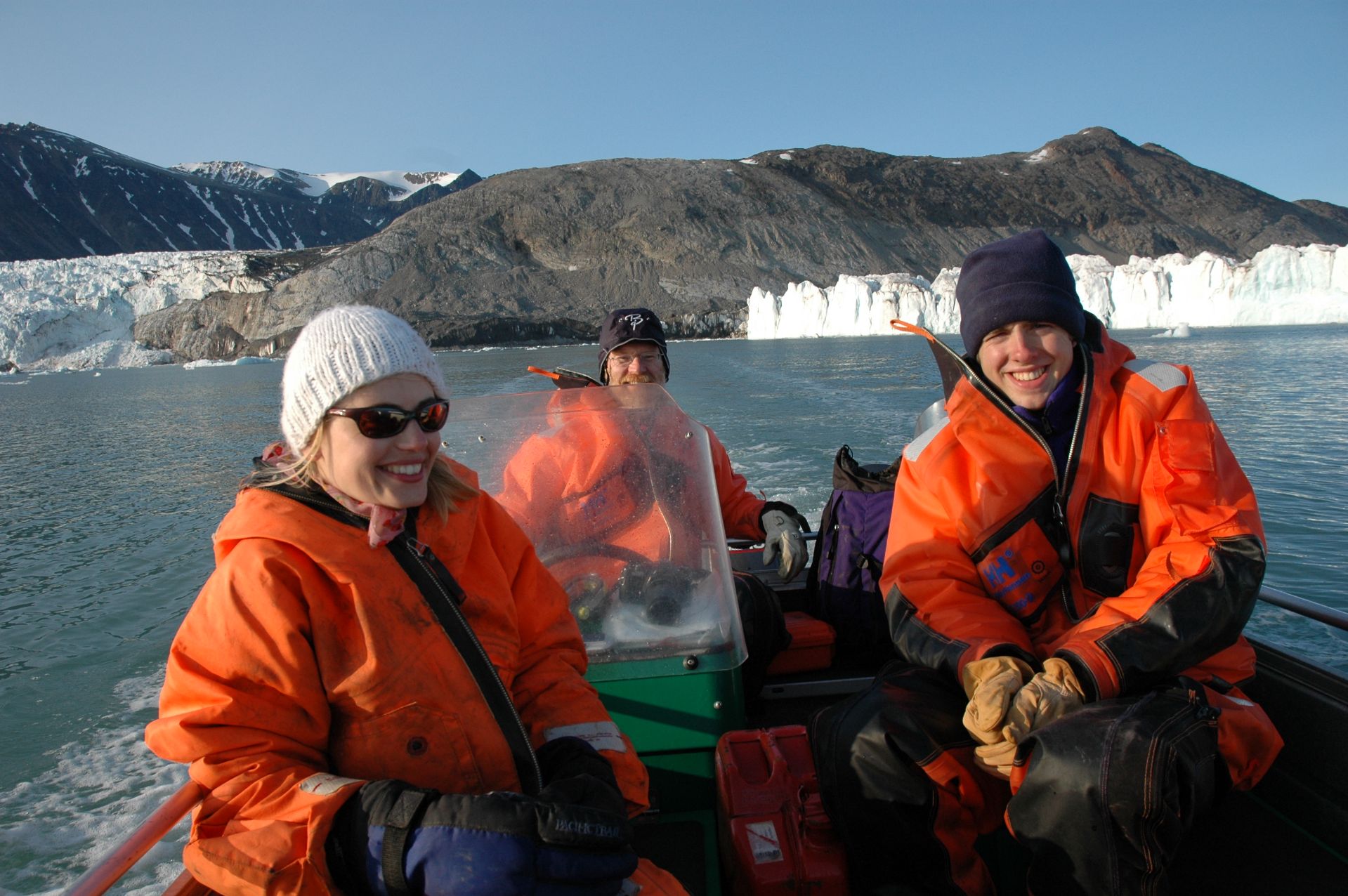 Bates Professor of Biology Will Ambrose (center) and Kelton McMahon ’05 (right) ride with Gro Harlaug Olsen of the University of Tromso through Kongsfjorden in Svalbard, Norway. (Courtesy of Kelton McMahon)

“I had the opportunity to conduct some really amazing cutting-edge research with world-class researchers,” says Kelton McMahon ’05, an assistant professor of oceanography at the University of Rhode Island who traveled to Antarctica in 2016 and plans to return next year. “That is not common in a lot of universities for undergraduates.”

McMahon, who’s developed chemical tools to answer biological questions, started studying at the intersection of biology and geochemistry at Bates. For a marine ecology course taught by Ambrose, he was assigned an independent research project.

Several of Ambrose’s former students, including Ari Friedlaender ’96, Doug Krause ’99, and Carolynn Harris ’11, have gone on to conduct research in Antarctica. For Ambrose, gaining the skills to work independently is critical to success as a scientist. 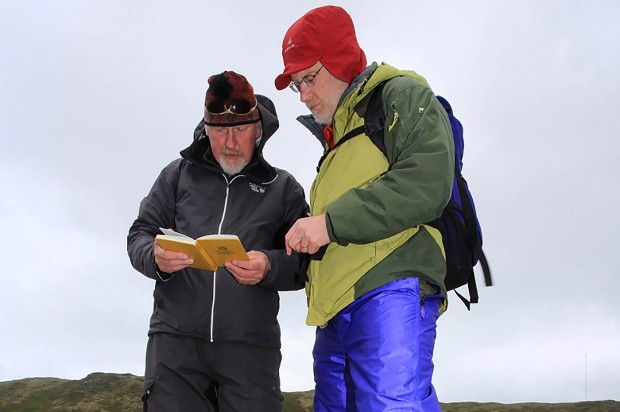 “My philosophy has always been that by the time students get to be seniors, they have to be functioning like a first-year grad student, or close,” he says. “Bates students are bright, and that’s how I treat them.”

McMahon’s interest in aspects of geochemistry also led him to take a course with Professor of Geology Beverly Johnson. He worked with both Ambrose and Johnson for his marine ecology project, which concerned the diets and movements of a killifish species in a Maine salt marsh. That turned into McMahon’s first published scientific paper.

Johnson, who also co-advised Carolynn Harris, is used to working closely with students. 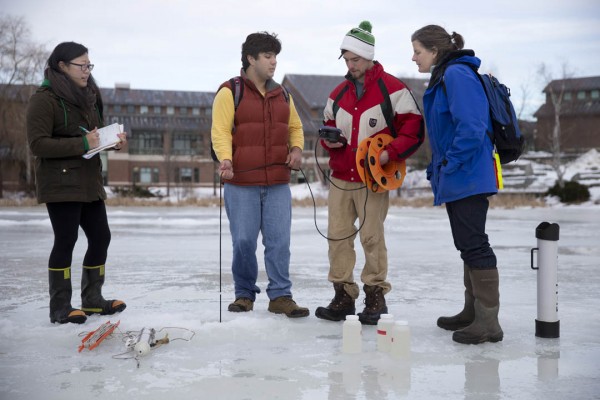 “They drive the research that I do,” she says. “They come in and often have their own questions, and are eager to get involved in some of the questions I’m pursuing for my own research.”

Working closely with her students benefits both her and them, Johnson says. The students’ work turns up geochemical data that both student and professor can use — and because the data must be carefully collected in a specific way, students learn technical skills that can serve them well in graduate school and beyond.

Students also help Johnson think about her own research in new ways.

“Students bring so much to a project, they really do,” Johnson says. “They have different ways of thinking about things. They have different experiences at Bates than I had as an undergraduate, so they’ll bring in what they learned from other classes. I consider them more collaborators and colleagues.”

“It’s training the next generation of scientists, if not polar scientists.”

Both Ambrose and Johnson again advised McMahon for his senior thesis, on ice algae and phytoplankton in the Arctic Ocean. He did fieldwork in Svalbard, a Norwegian archipelago above the Arctic Circle. It’s an area where scientists can see up close the rapid effects of climate change on the polar regions, and it’s a popular destination for Bates students and faculty interested in polar science.

One of them is Professor of Geology Mike Retelle, who studies the movements of glaciers on the islands and usually brings students with him on his trips. While Bates undergraduates work within the scope of Retelle’s ongoing research, they design and execute their own projects.

“They help with the preparation before they go into the field, and they see the project right through the end,” Retelle says. “It’s how field science is done. It’s not a canned experiment.”

The opportunity to work directly with students was what drew Retelle to Bates in the first place, he says.

“It’s fun seeing them experience something you’re so passionate about,” he says. “Importantly, it’s training the next generation of scientists, if not polar scientists.” 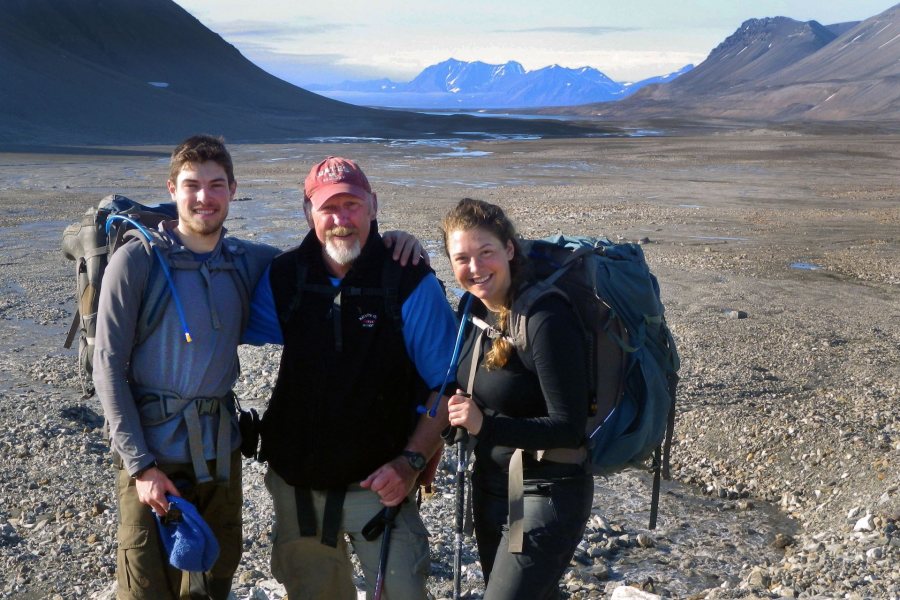 Professor of Geology Mike Retelle poses with Allie Balter ’14 and Greg de Wet ’11 at a field site in Svalbard, Norway, in 2013. Balter, now a graduate student at the University of Maine, conducted research in Antarctica in recent months. (Courtesy of Greg de Wet)

One of Retelle’s first students to catch what he calls the “Arctic bug” was Brenda Hall ’90. Now a professor in the School of Earth and Climate Sciences at the University of Maine, she studies glacial history and paleoclimatology. She’s made more than two dozen research trips to Antarctica.

As an undergraduate, Hall traveled with Retelle to Canada’s Resolute Island to research lakes.

“He’s really good at explaining things in the field especially,” she says. “One of the things I like about fieldwork is that it’s fun, and Mike really managed to make the work interesting. That’s something that I’ve kept with me.”

Retelle later mentored Hall during her graduate school search and connected her with faculty at UMaine, where she earned a doctorate. Now herself a teacher and adviser to students — including Allie Balter ’14, who traveled to Svalbard with Retelle as a Bates student and went to Antarctica with Hall this year — she brings both undergraduate and graduate students into her research, early and often. 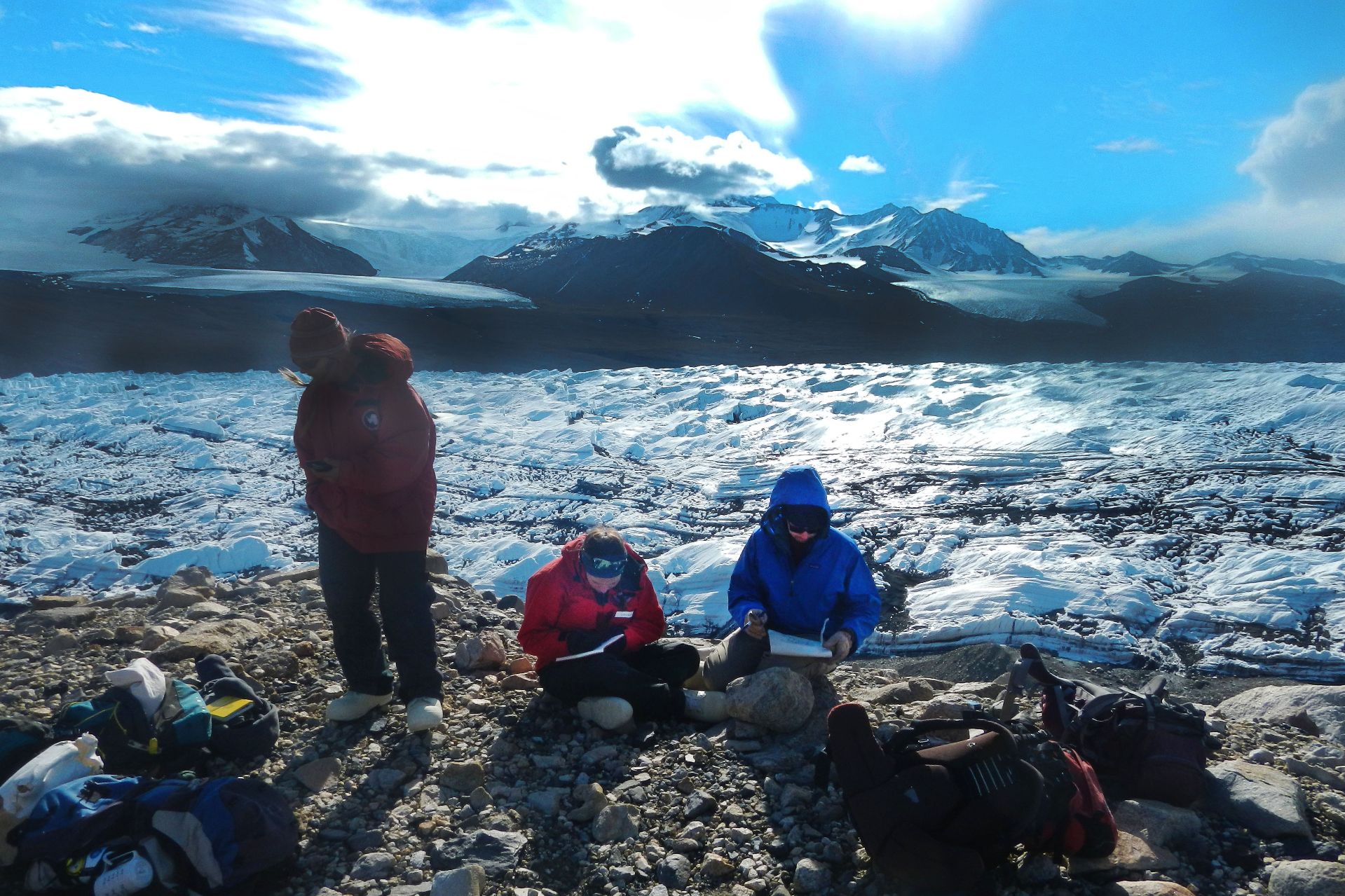 “Getting students involved in research early is really critical,” she says. “Mike did that with me, and I do that with my own students.”

After his own Arctic research experience, Kelton McMahon wrote a senior thesis that was also published as a scientific paper. He’s since collaborated with both Ambrose and Johnson on several projects as he moved through graduate school at the MIT-WHOI Joint Program in Oceanography, postdoctoral positions at the University of California, Santa Cruz, and now in his faculty role at the University of Rhode Island.

Working with his advisers was “a phenomenal opportunity to think transformatively, to learn how to think like a scientist,” McMahon says.

“It gave me an incredible leg up as I got to graduate school — I had done oceanographic cruises, I’d published multiple papers, I’d presented at conferences, all because I had been able to work with these professors.”