Video: Rosemary Kyne ’18 uses rowing to fuel confidence in life and on the water

When Rosemary Kyne ’18 came to Bates from Nashville, Tenn., she didn’t know much about rowing, or about herself. That changed.

“I feel like a big part of me has been able to grow in the rowing world and in the greater Bates world,” she says. “Rowing is a place that I have been able to find myself and become always a better version of myself.”

Now a senior and an All-American, Kyne will be aboard Bates’ first varsity boat as the Bobcats compete in the grand finals of the NCAA Championships in Sarasota, Fla., on Saturday, May 27. 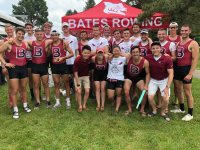