With Theodore Walther’s appointment to the Bates economics faculty in 1958, the department exploded in size — from two professors to three.

For Walther, a professor emeritus of economics who died on June 2 at age 88, that was the beginning of vast changes in the college during his 43 years on the faculty. He traversed his long tenure with a New Yorker’s wry bemusement, leavened with a Navy sailor’s equanimity and undergirded by great devotion to teaching and his students.

A celebration of Theodore Walther’s life will be held at 12:30 p.m. Saturday, June 9, at the Gomes Chapel.

A native of Atlantic City, N.J., Ted grew up in New York City and served in the U.S. Navy from 1948 to 1952, primarily aboard the aircraft carrier USS Kula Gulf. After receiving a bachelor’s degree from Mexico City College in 1955, he earned master’s and doctoral degrees from the New School for Social Research.

In 1998, 40 years after his appointment to the Bates faculty, Walther retired. Even in retirement, he taught Bates courses until 2002. His textbook on international economics, The World Economy (Wiley), was published in 1996. 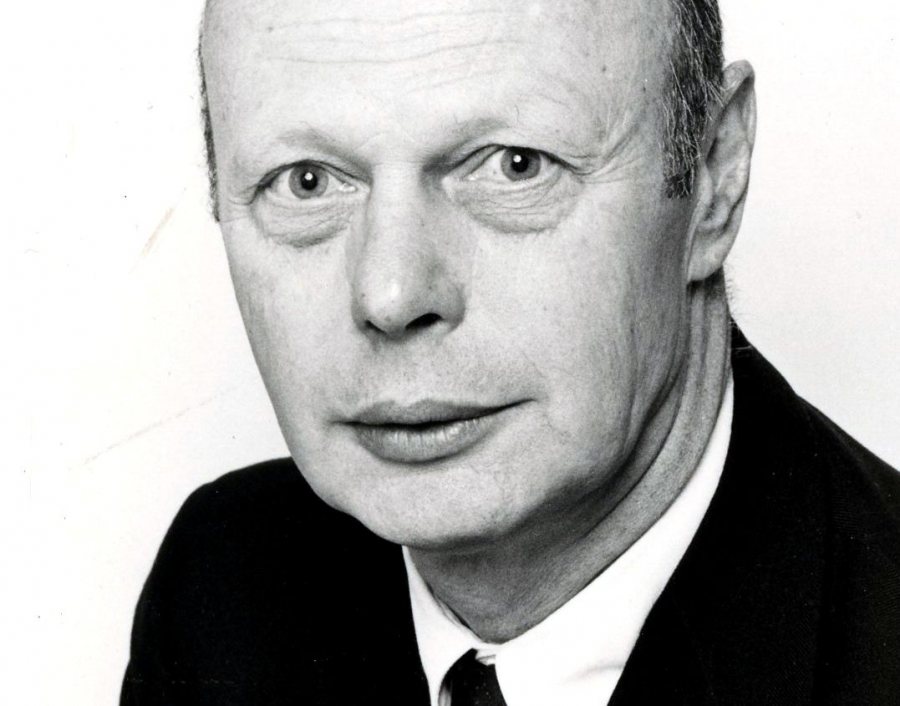 Professor Emeritus of Economics Theodore Walther, who died June 2 at age 88, served on the Bates faculty from 1958 to 1998. In retirement, he taught a course each fall until 2001.

When Walther arrived, the college was half its current size, 875 students. Male and female students ate separately, in Rand Hall and Memorial Commons, and followed different social rules — the men’s more lax than the women’s. Teaching four courses each semester, twice the current standard, Bates professors tended to be, and were expected to be, generalists with little time for research.

Indeed, the in loco parentis model was firmly in place at schools of Bates’ ilk, and the faculty were expected to be highly attentive parentes. “I think there were a lot of people who were attempting to tell the young people what to do,” he recalled for the Bates Oral History Project in 1998. On move-in day, for example, professors would greet arriving freshmen at their residences and help carry in their belongings. 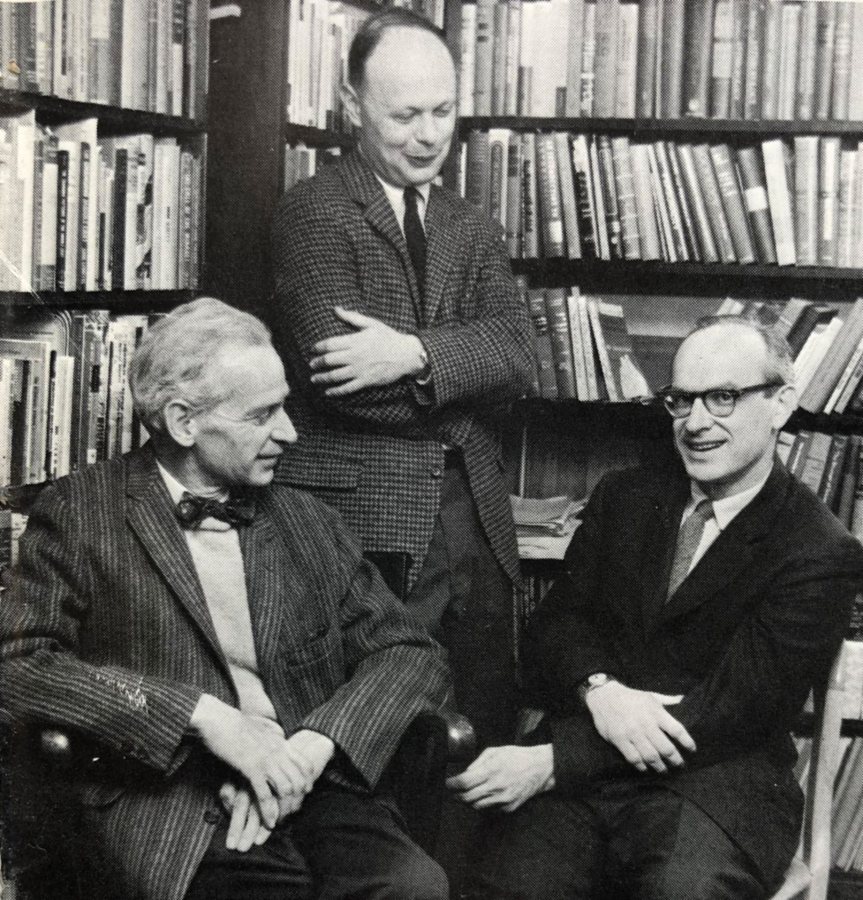 Ted Walther’s arrival in 1958 expanded the economics faculty from two to three. From left, David Williams, Walther, and Ralph Chances pose in 1964. (The Bates Mirror)

In his oral history interview, he said that his initial Bates courses 40 years earlier, including principles of economics and comparative economic systems, were “bombs. I was teaching a lot of courses, and they were pretty sad.” He and all the Bates faculty would get much better.

Late in the 1960s, younger faculty were growing in number and beginning to find their voice. In 1967, Ted joined a handful of faculty members, including Carl Straub and John Cole, in signing an open letter of protest against the Vietnam War, which they called “immoral, illegal, and ultimately futile.”

Under Hedley Reynolds, Bates president from 1967 to 1989, faculty expansion really got going, as did growth in student enrollment. The Bates professoriate became “sharper,” said Ted in 1998, in the sense that “they [could] now concentrate on certain areas in economics rather than covering a broad spectrum. This is very good.” 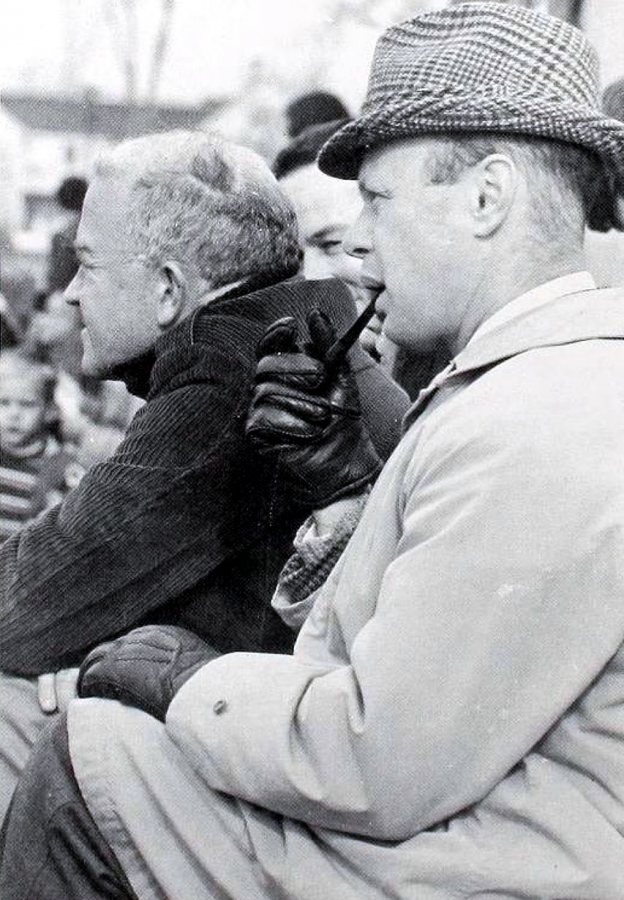 With Title IX regulations coming into full force in the 1970s, Bates moved toward greater equity in athletics, and in 1980 Ted became the first chair of the faculty’s newly constituted Committee on Athletics. Though he abhorred the bureaucracy of faculty committee work, he was proud of what the Athletics committee accomplished.

When students dubbed him “Terrible Ted,” it really meant that “he wasn’t.”

What did not change during Walther’s time, nor thereafter, is how college students rely on irony to communicate affection, so that when students dubbed him “Terrible Ted,” it really meant that “he wasn’t,” says his colleague Michael Murray, Charles Phillips Professor of Economics. A second-floor classroom in Pettengill Hall is dedicated to Walther, and the plaque’s few words testify to the fondness and respect accorded him: “in honor of a professor and a friend.”

Self-effacing and with a dry wit made spicy from years in the Navy, Ted was “not a show-off, and was always incredibly polite and thankful for small favors,” says his colleague Anne Williams, professor emerita of economics. 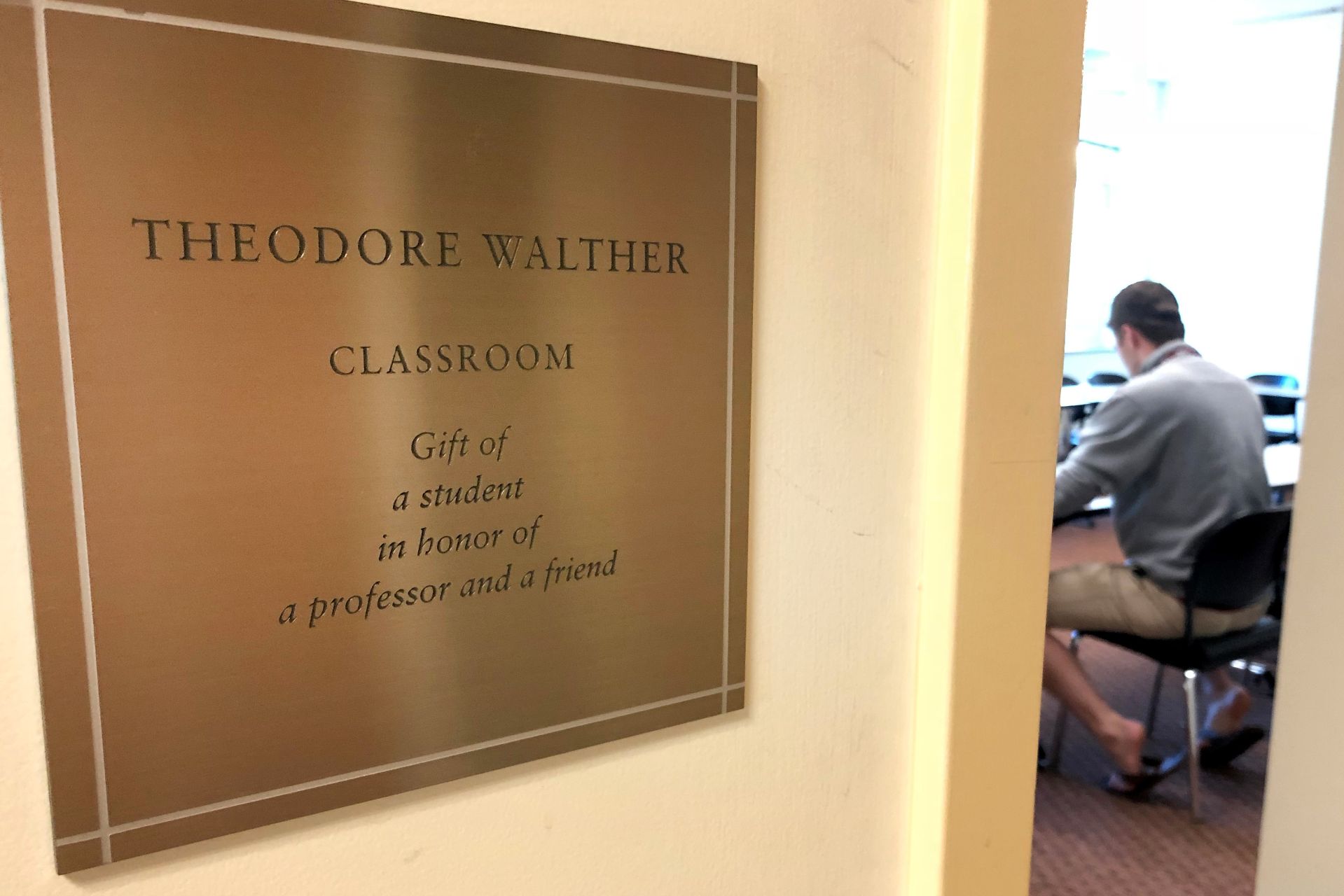 A Pettengill Hall classroom is named for Ted Walther. The plaque reads, “Gift of a student in honor of a friend and a professor.” (Jay Burns/Bates College)

The dry wit shows throughout his oral history interview. Asked if living on Frye Street bothered him, his home being near many student residences and concommitant noise, he said, “Let me put it this way: I’m used to it. And I think a few years from now I’m going to have all the silence I’m going to need.”

The spiciness was evident when, in one of his classes in 1983, he called then-Sen. Ted Kennedy “the Massachusetts Marathon Swimmer,” a reference to the Chappaquiddick incident. A Bates Student columnist objected to the jab, then two of Walther’s students responded with a letter to the editor, saying professors should be allowed — through humor or not — “to challenge our perspectives and prejudices.” 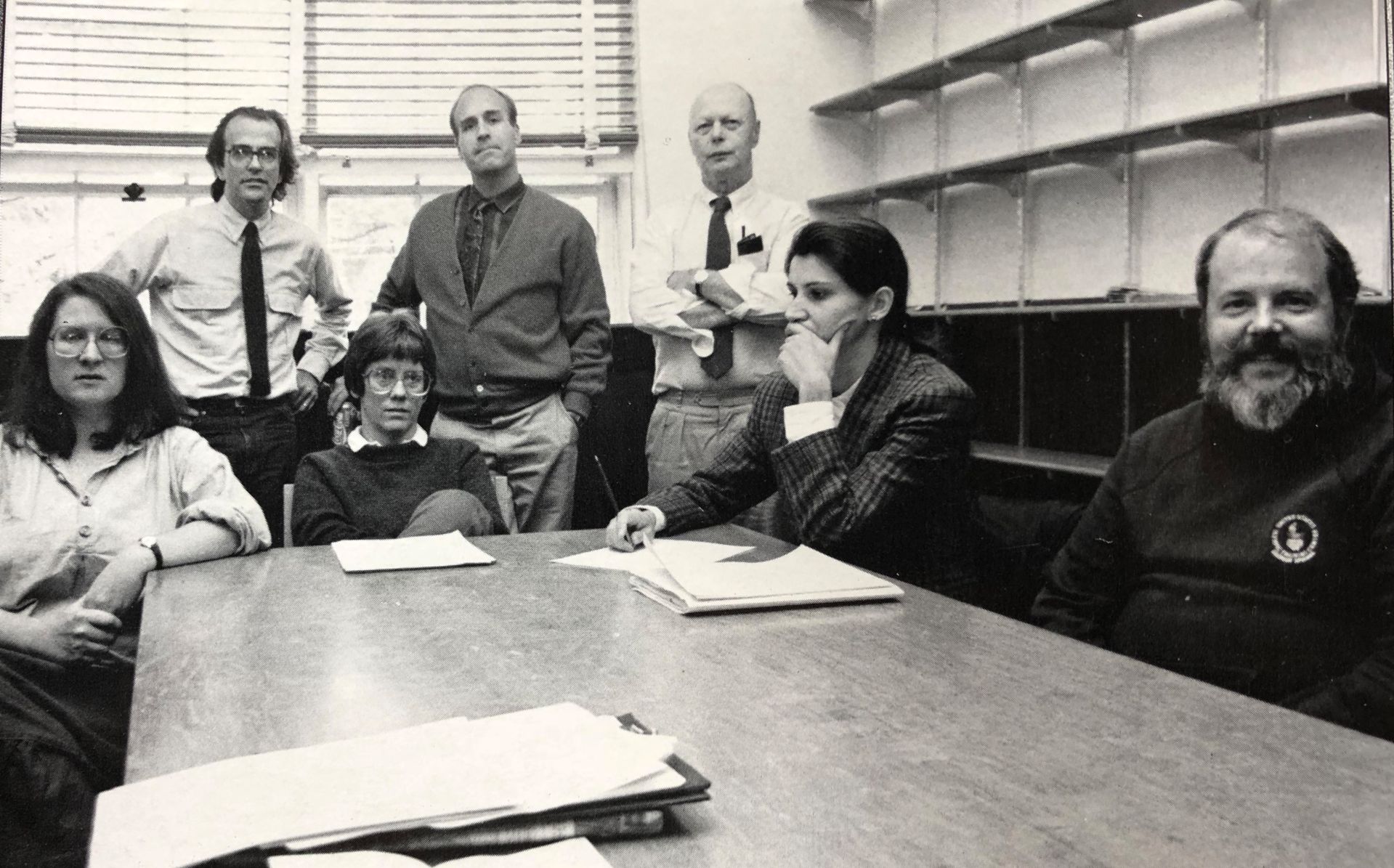 An international economist, Walther said that his favorite course was “The World Economy,” which he continued to teach each fall for three years after retiring (by which time, the economics faculty numbered a dozen members). “For many years, Ted gave students their only exposure to international trade and international finance,” says Murray.

When asked how he regarded a fellow swimmer, age 92, who seemed to defy Father Time, Walther smiled and said, “With jealousy.”

“Ted always claimed he chose to go Mexico City for his B.A. degree because the favorable exchange rate would stretch his GI Bill dollars,” Williams says. “I suspect this was an early signal that he would develop into an international economist.” He also taught statistics, international macroeconomics, and monetary policy, and served as department chair. “He had an inimitable form of written expression,” she adds. “His administrative memos were never dull.”

He was an avid swimmer who worked out at Tarbell Pool. Asked in 2009 how he regarded a fellow swimmer, age 92, who seemed to defy Father Time, Walther smiled and said, “With jealousy.”

Friends and colleagues remark on his attentiveness and interest. “He always, always, asked about your family,” said Paul Menice, assistant director of security and campus safety.

When Lynne Lewis, now the Elmer Campbell Professor of Economics, arrived at Bates, Walther was teaching just his one course “but he always stopped by my office when he was here,” she recalls.

Having learned that Lewis earned a doctorate at the University of Colorado, Walther wanted to know about Ralphie the Buffalo — the live mascot that runs into the stadium ahead of the team at football games. “He was especially fond of Ralphie and very surprised to hear that Ralphie was actually a female.”

Walther’s survivors include daughters Pamela Walther Felber and Susan Walther; six grandchildren; four great-grandchildren; sister Gretchen Walther Dumler and brother Chris Walther; and a niece and nephew. He was predeceased in 2013 by his wife, Joan Mirandon Walther, who worked as a registered nurse in the Bates Health Center from 1974 to 1993. Almost always when he spoke of her, Ted Walther referred to her as “my bride.”