Recalling the 1998 restoration of Lake Andrews

Twenty years ago this month, Bates began a major restoration of the Lake Andrews area.

First, the pond was drained by opening the sluice gate at the north end, near Russell Street. Then, bulldozers and backhoes removed 4,963 cubic yards of so-called dredge spoils, scraping the bottom to the base of marine clay.

As the water level lowered day by day, all sorts of treasures were revealed: a bowling ball, mangled bike, table, stereo set, desk, bed frame, chairs, tennis shoes, bottles, cans, three 30-pound snapping turtles (they were relocated to a nearby pond), and many overgrown goldfish (they met their maker).

It had been 40 years since the pond was first excavated, and the accumulation of mud was deep, a fact that aquatic biologist and limnologist Scott Williams ’71 learned the hard way. 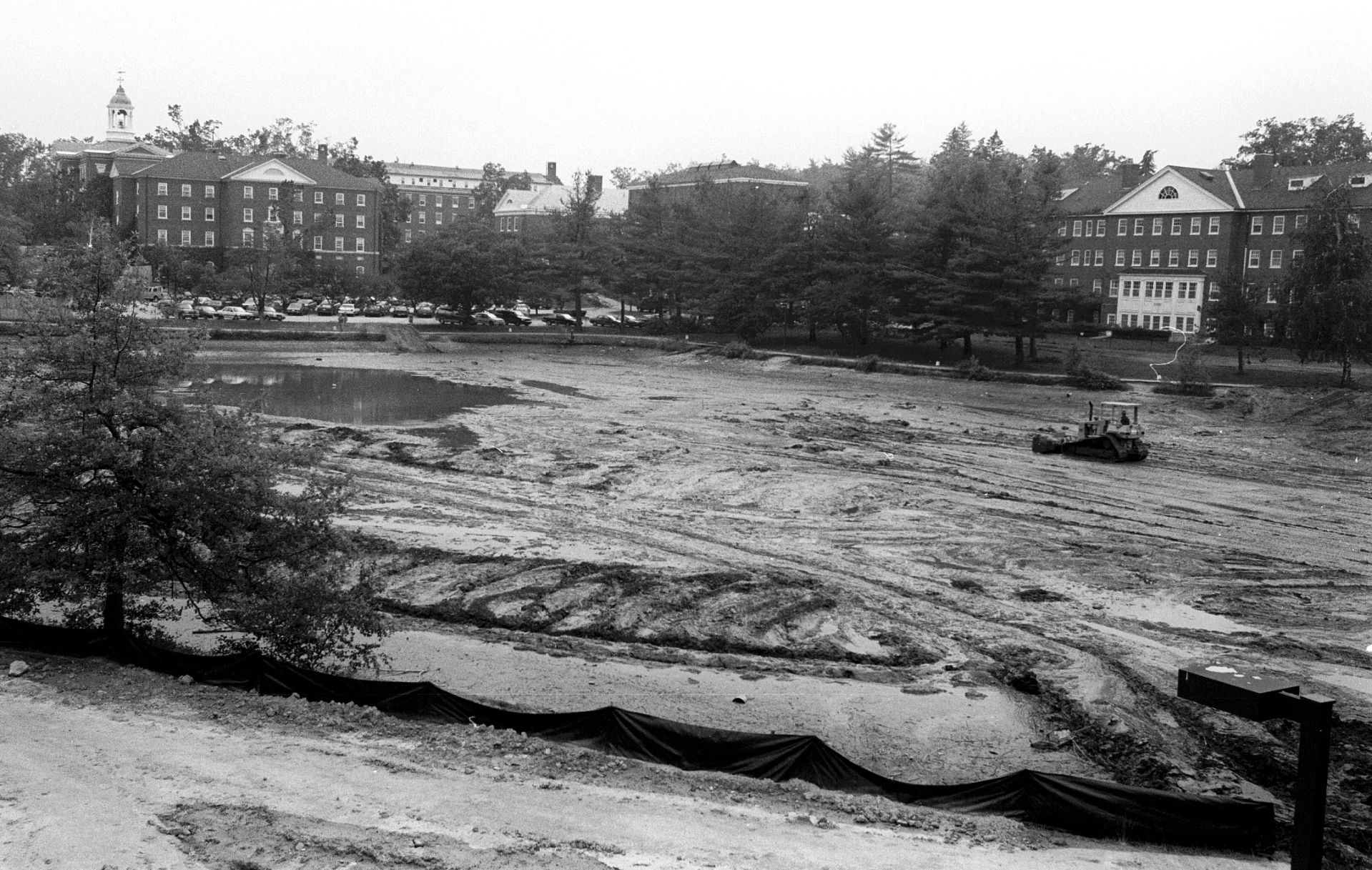 Bulldozers scrape the bottom of Lake Andrews down to its base of marine clay during the July 1998 restoration. (Marc Glass ’88/Bates College)

Williams was a consultant on the project, and late one afternoon during the dredging operation he spied one of the snapping turtles in the middle of the pond. Armed with his trapping gear and wearing hip waders, he headed out toward the snapper. But he never got there.

A few yards from shore, he could move no more. “I was up to my thighs in muck.” He struggled for a bit, then scanned the shoreline for help. “No one was around,” he recalls. “Not a soul.”

But then a truck stopped, and a man stepped out. “You’re stuck, aren’t you?” he asked. Yup, replied Williams. “Well, I can help you,” the man said.

“I would’ve come out naked.”

Could he ever. The Good Samaritan was also one of the heavy-machine operators. He mounted his idle excavator — a “monstrously big thing,” recalls Williams — and fired it up. All the while, Williams was thinking, “How is this going to work?”

The operator expertly maneuvered his rig so it perched on the very edge of the pond, and extending the bucket to its full reach, just to where Williams could grab it.

The huge bucket soon loomed directly and, from Williams’ stuck perspective, menacingly over his head. “All I can think is that if his rig toppled into the pond, I’m going to be driven 10 feet into the sediment.”

In 1998, the beloved Puddle’s massive makeover began with its complete draining.

The operator had a plan. “I don’t think I can just yank you out,” he called to Williams, who heartily agreed with the anti-yank sentiment — “I would’ve come out naked.”

Instead, the idea was for Williams to grab the teeth of the bucket, and then the operator would rock him back and forth to break the suction.  “It worked,” says Williams. “He was able to lift me out, swing me around, and deposit me on the shore.”

Lake Andrews got its name in the 1910s when Delbert Andrews, Class of 1910, helped students create a skating rink by damming a swampy area of campus behind Hathorn Hall and Parker Hall. In 1958, as Bates embarked on a building program, the college excavated wetland to create a formal retention pond to handle stormwater runoff. 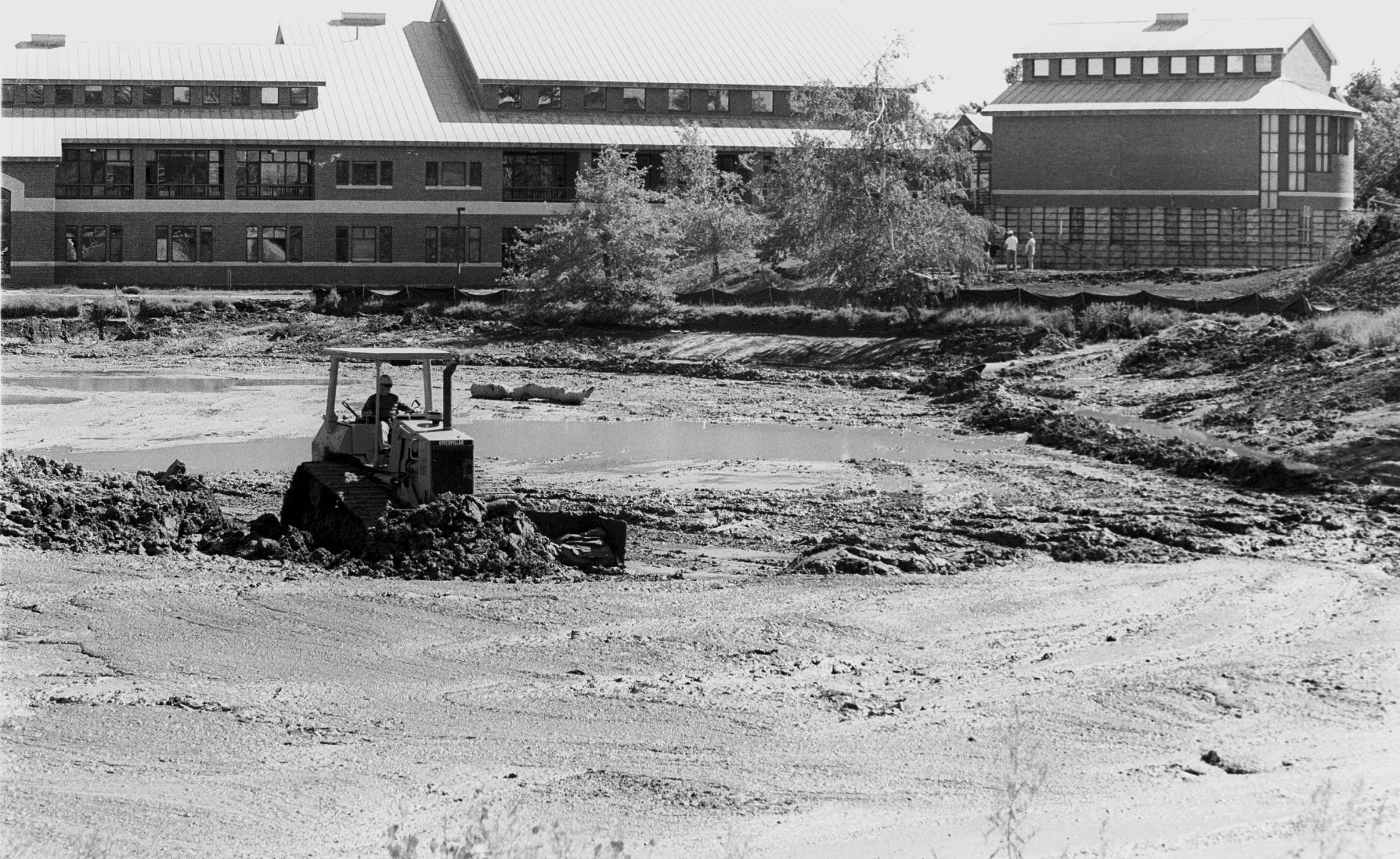 During the 1998 restoration, Lake Andrews was drained by opening the sluice gate at the north end. Once it was drained, bulldozers and backhoes removed 4,963 cubic yards of dredge spoils. (Marc Glass ’88/Bates College)

Like many urban ponds, Lake Andrews gets much of its water from stormwater running off roofs, parking lots, and lawns, so it has a harder time staying healthy than its country cousins.

“The water doesn’t receive filtration that a natural pond would from forests, land, and soil,” says Williams, the longtime director of Lake Stewards of Maine, a nonprofit that works to protect the health of Maine lakes by collecting citizen-reported scientific information.

In the years prior to the 1998 restoration, Lake Andrews was susceptible to eutrophication, which occurs when a body of water receives too many nutrients, especially nitrogen and phosphorus, prompting overgrowth of plants and algae. Even in Williams’ era, the Puddle had a bad rap. “No one would stick their pinky in it.”

The marine clay layer that exists all around the Bates campus doesn’t help the pond, explains Williams. “Marine clay tends to be impervious; it doesn’t absorb water. So the watershed runoff, rather than filtering into the ground, tends to erode the clay, creating silt that carries nutrients like phosphorous into the pond.” (Years of silt runoff also created the deep muck.) 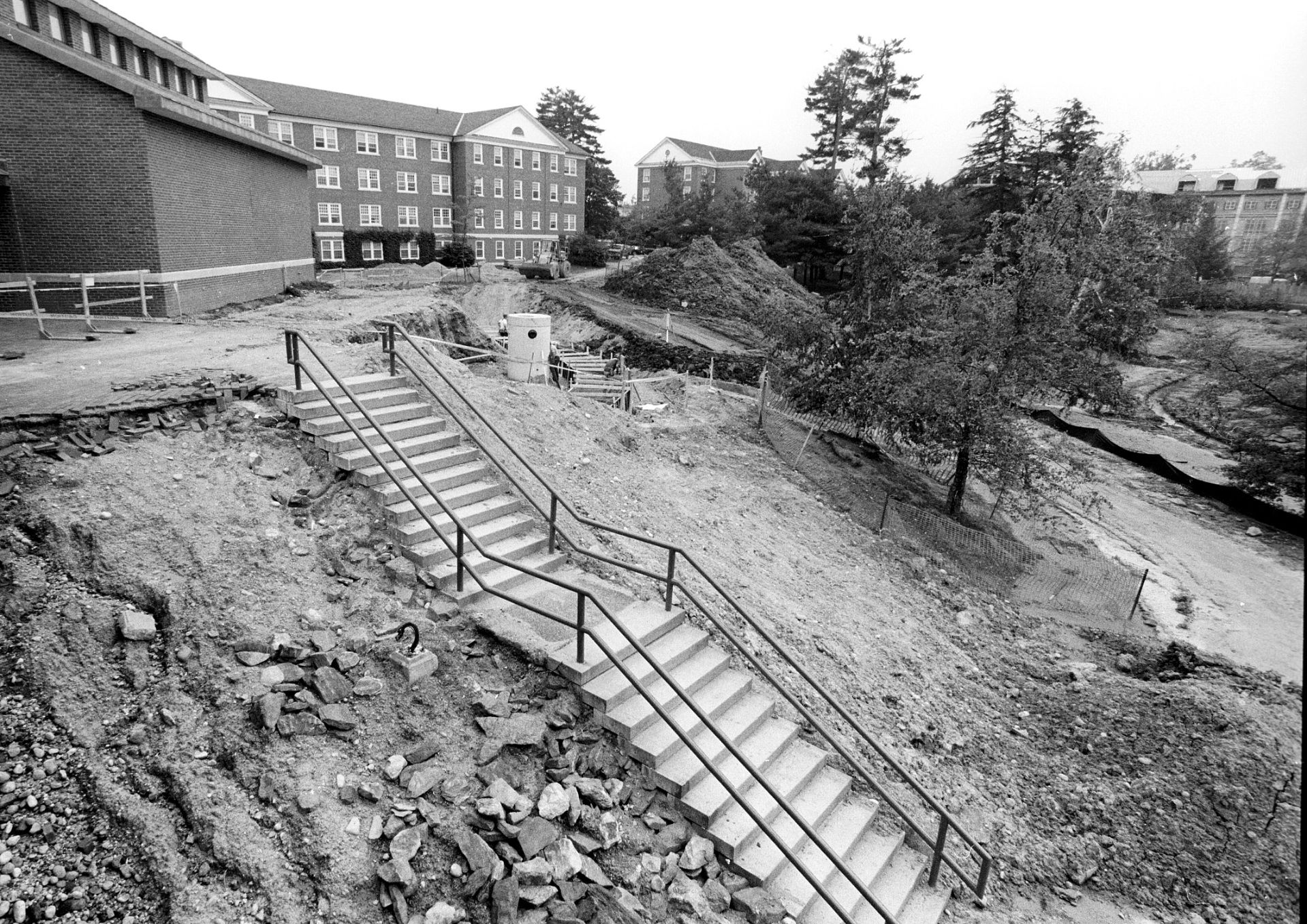 At this site, between the Museum of Art and the pond, the college created the new Florence Keigwin Amphitheater. (Marc Glass ’88/Bates College)

Planted along the shore, aquatic and terrestrial buffer vegetation, including lots of bulrush and low-bush blueberry plants near the Museum of Art, help to filter sediments and nutrients from watershed runoff. Some 250 tons of rip-rap (large stones that prevent water erosion) were placed in some areas, vertical stone walls built in others, to further stabilize the shore and curtail silting.

The restoration also entailed a passive runoff filtration system to capture nutrients. “It was fairly sophisticated technology,” says Williams. “The goal was to slow down the pond’s return to a eutrophic state, though it will never be completely turned around due to it being an urban pond.”

The existing path around the pond was moved back from the shoreline, improved, and named the Marjorie Burgoyne Walkway. With granite from an old quarry in Lincolnville, Maine, the college built the new Florence Keigwin Amphitheater to help connect the Museum of Art to the pond.

Much of the 1998 Lake Andrews shoreline restoration was funded through a $1-million gift from Jack Keigwin ’59 and his wife, Beverly, longtime supporters of projects that improve and enhance the Bates campus. The naming of the amphitheater honors Jack’s aunt, while the path honors Beverly’s mother.

“The Lake Andrews area has a significant potential as a place of respite and rejuvenation,” Jack Keigwin accurately predicted at the time. “It is a place to gather and to celebrate, a place for recreation for the soul and mind.”