18 years after ‘just friends,’ they tied the knot back at Bates

Nobody thought Elizabeth Merrill ’00 and Lawson Rudasill ’00 would become a couple.

Sure, they were good friends at Bates. Sure, they kept in close touch after college. Sure, they slow-danced together at their Bates friends’ weddings.

Sure, they had the same wacky sense of humor, were on the same wavelength, were completely comfortable with and accepting of one another, and had grown only closer over the past 20 years.

Despite all that, their friends never predicted their getting together. 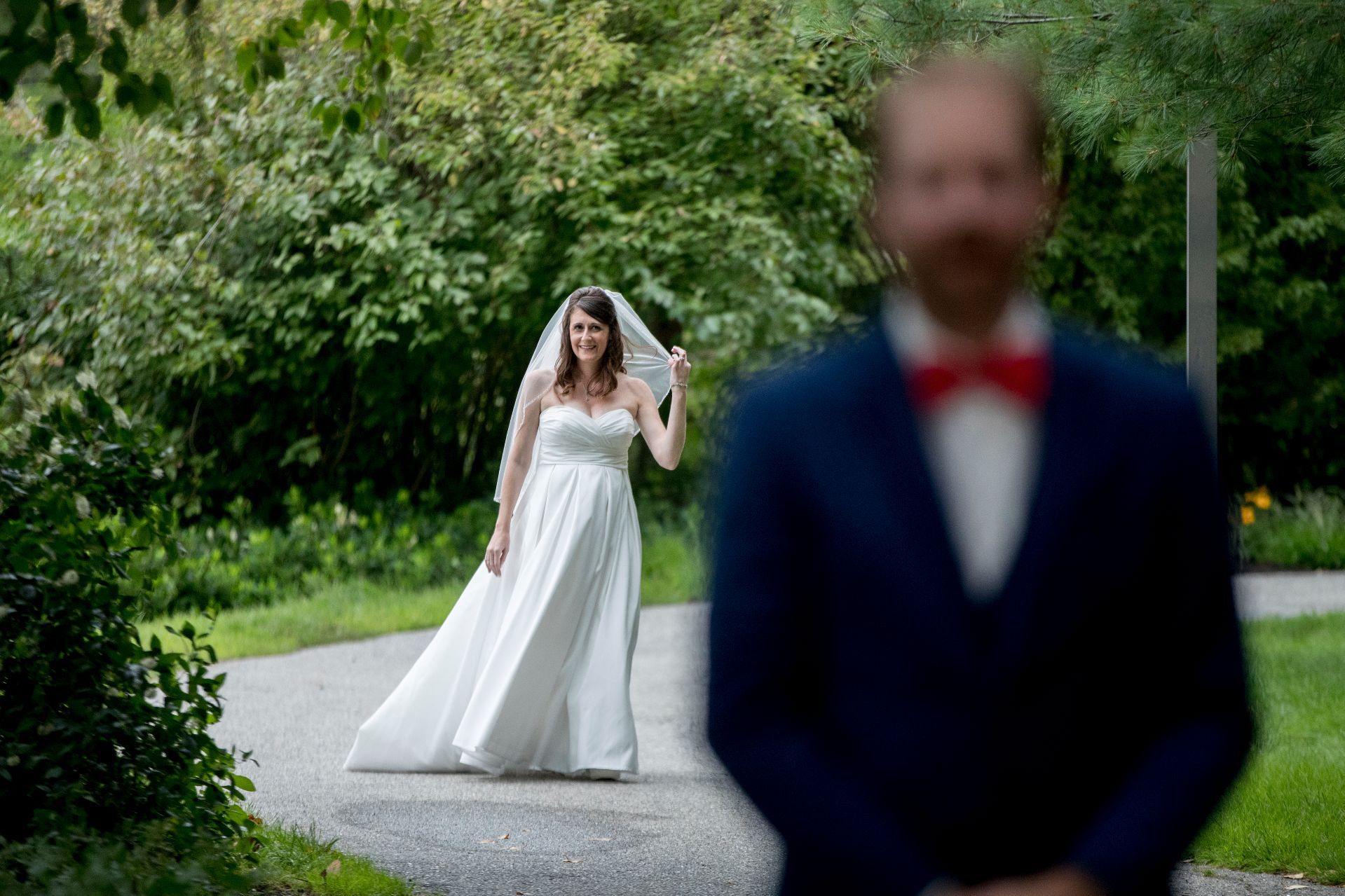 “But the more they saw each other and reflected on it, the more they realized what nobody anticipated: that a romantic relationship felt right,” as their good friend Cynthia Macht Link ’00,  a co-officiant at their wedding in August, said during the ceremony in the Peter J. Gomes Chapel.

“When Elizabeth and Lawson finally decided to be together, it made perfect sense, because the feelings had been there all along.”

The Bates-at-Bates wedding was just like what you’d see in the wedding photos in Bates Magazine — with classmates and alumni who’d become close during college and remained close over two decades, moves, marriages, and children. 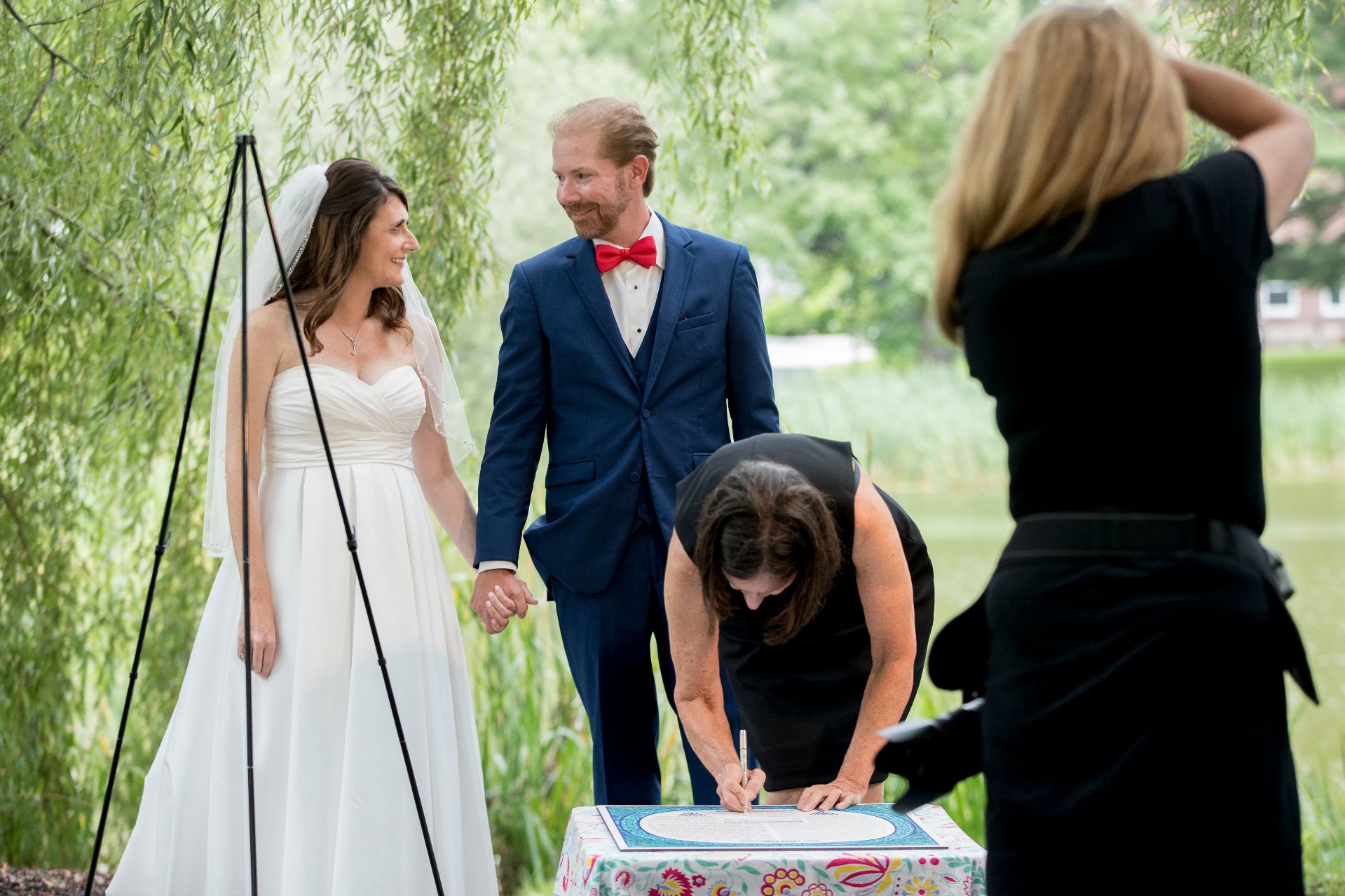 During their sophomore year, Merrill and Link were rooming together, and Rudasill was roommates with Ed Pauker ’00, Ted Martin ’00, and Mark Douthat ’01. The two sets of roommates found kindred spirits in each other. They moved to suites across the hall from one another in John Bertram Hall during their junior year, Kate Dodson ’00 and Abigail Goen Helfat ’00 joining Merrill and Link. They played foosball in the men’s dorm room, went to each other’s hockey and Ultimate Frisbee games, and threw parties.

“We had such a good circle of friends with Liz and Cynthia and others,” said Ed Pauker, the other co-officiant at the wedding. “Liz and Cynthia would show up at the dorm and it would turn from being four boys with stained jeans, to an actual party.

“I think our relationship was very chummy, very silly. As a group we were dorky and ridiculous,” said Merrill, interviewed along with Rudasill before their wedding.

“It was, who can make the other person laugh the most?” Rudasill added. 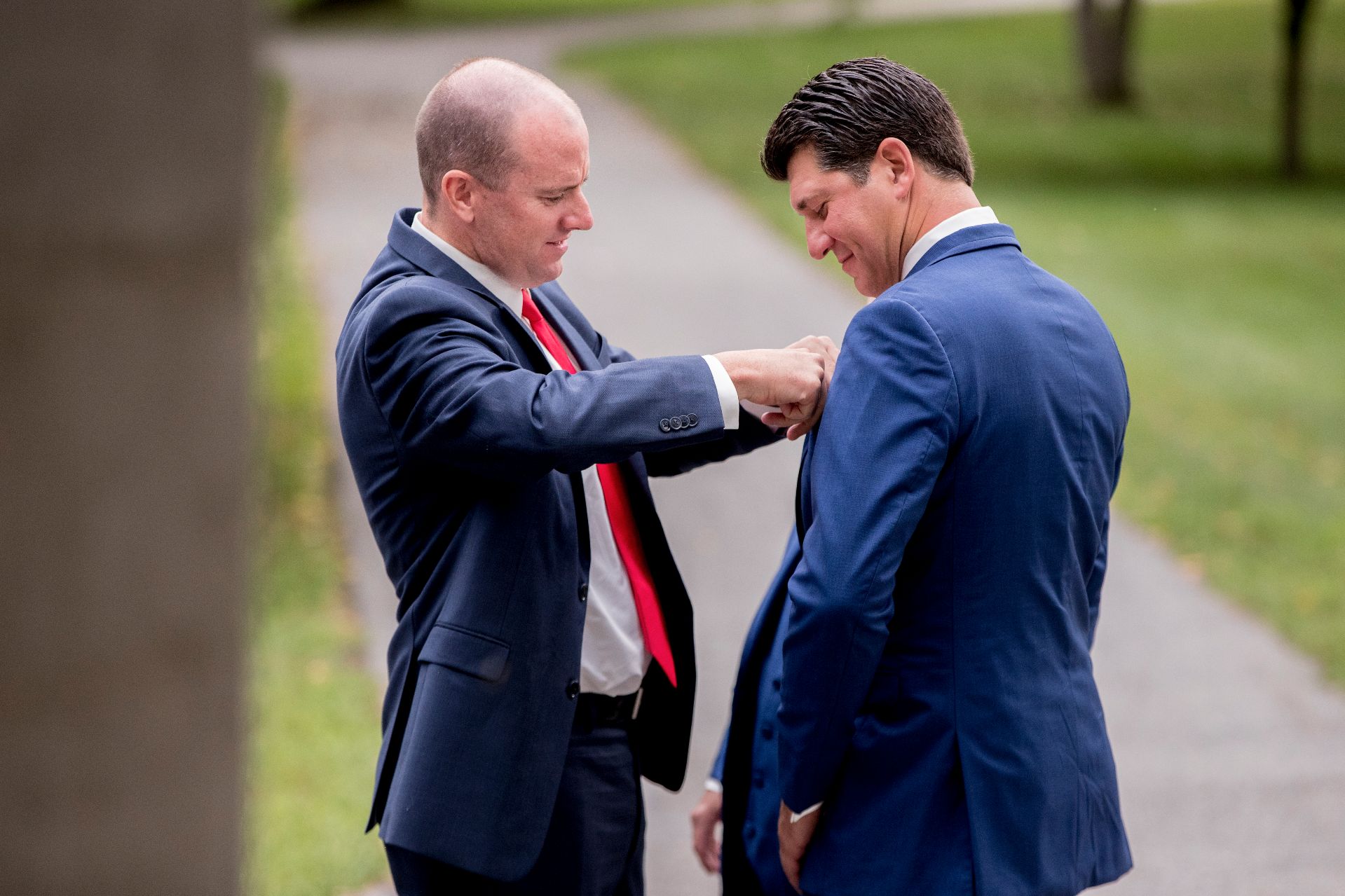 Merrill studied psychology and Spanish and studied in Spain and Ecuador. “She always wanted to go to every party,” Link said. “She had a lot of friends. You could call her the life of the party, but she was also very smart and serious about her academics. She was very open to trying everything at Bates.”

“That’s probably the moment I was like, ‘She’s awesome.’”

Rudasill, meanwhile, played Ultimate Frisbee and was involved in the Bates Democrats. “He was really idealistic about the world,” Link said. “He still is. He’s passionate about his ideals.”

During their junior year, the group threw a surprise party for Jon Adler ’00. Merrill and Rudasill described the scene in the basement of JB as raucous, like most of their parties.

A camcorder, supplied by Rudasill, captured Merrill walking across the room. “It’s the way she bobbed across the room, the way her hair goes back and forth, and she’s smiling and laughing and just full of life,” Rudasill said. “That’s probably the moment I was like, ‘She’s awesome.’” 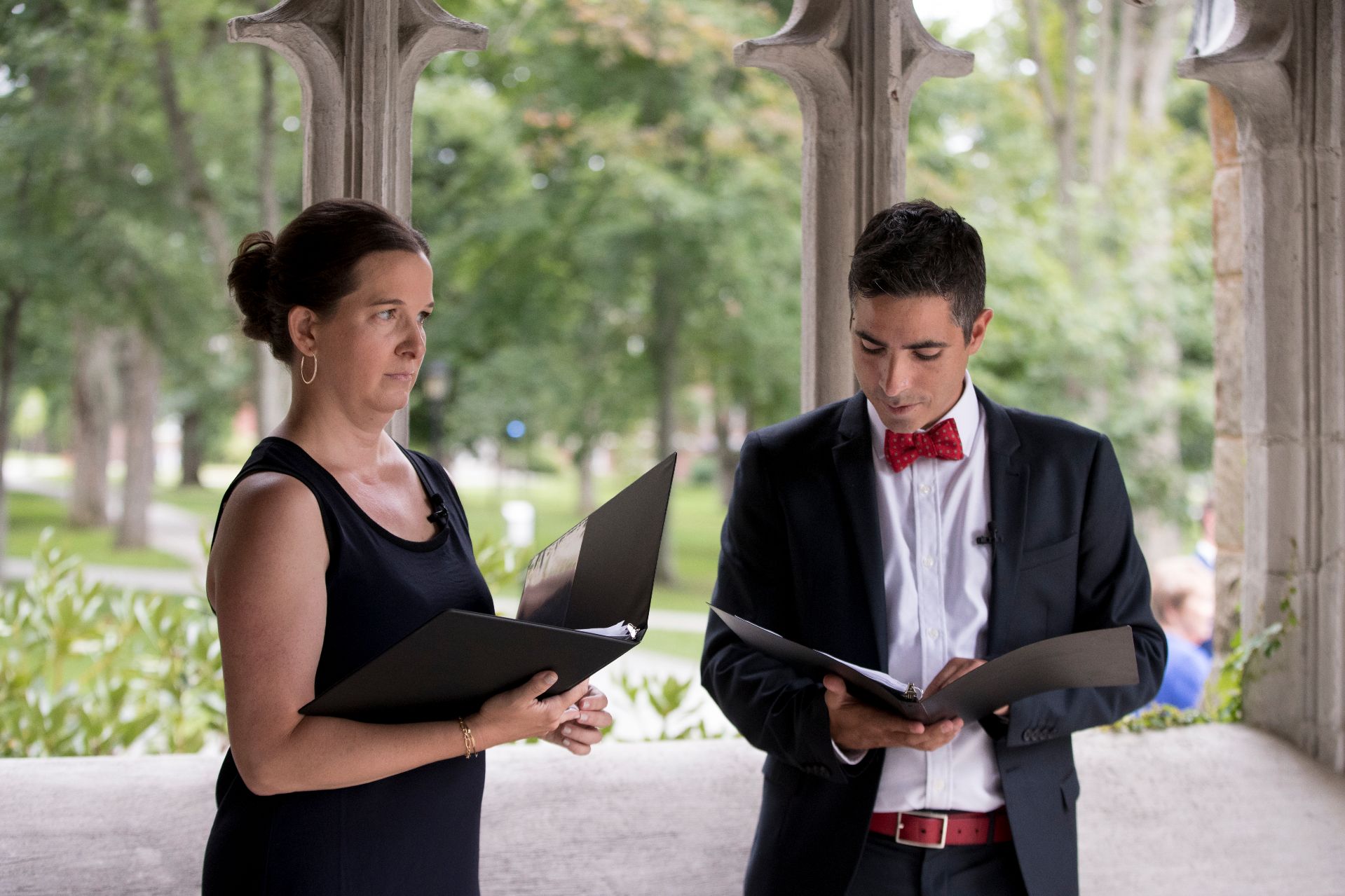 Cynthia Macht Link ’00 and Ed Pauker ’00 prepare to officiate the wedding of their Bates friends Elizabeth Merrill ’00 and Lawson Rudasill ’00 at the Gomes Chapel on Aug. 18. (Phyllis Graber Jensen/Bates College)

After graduation, Merrill, Rudasill, and their friends went their separate ways. Rudasill moved to Colorado, then worked in politics in Missouri before returning to Champaign, Ill., his hometown. Merrill worked in Massachusetts before earning a doctor of psychology degree at the Wright Institute and then settling in New York City as a psychologist. Rudasill married and divorced; Merrill “dated a lot,” she said.

“We loved to swing dance, so we were always swing dancing together at every wedding,” Merrill said.

But for nearly 20 years, dating didn’t occur to either of them, or to their friends.

“They both had different ideas of who they should get married to, and they were dating people who are not like each other at all,” said Cynthia Link, who stayed roommates with Merrill in Massachusetts and California. “It’s one of those things where the right person for you is not the person who you maybe had on paper.” 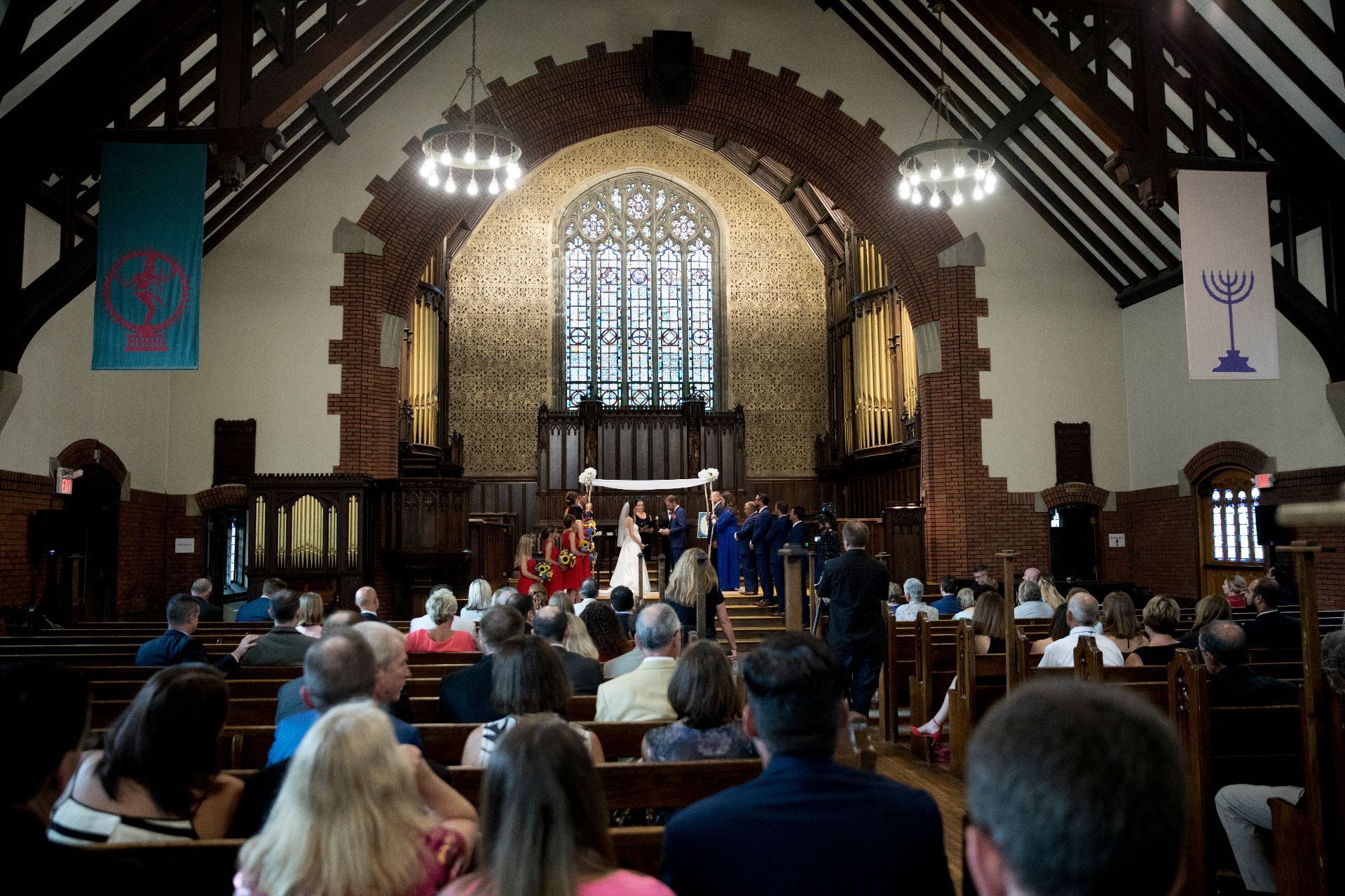 Still, theirs was a valuable friendship. “The main thing about them is that Elizabeth and Lawson are completely accepting of each other exactly as they are,” Link said.

By 2014, both Merrill and Rudasill were both single again, still living half the country away from each other and talking over the phone and Facebook Messenger. Slowly, the qualities that made them such good friends made them think something more was possible.

Said Merrill of Rudasill: “I think he is the kindest person, just the nicest person.”

Rudasill of Merrill: “It’s her love for life, her desire to see the world and meet new people and have new experience — that was exactly what I was looking for.”

Merrill began inviting Rudasill on singles’ trips that she took. “Finally,” she said, “on one phone call, he let me know he would be jealous if I found someone on one of these trips, so that’s how I realized he might have feelings for me.” 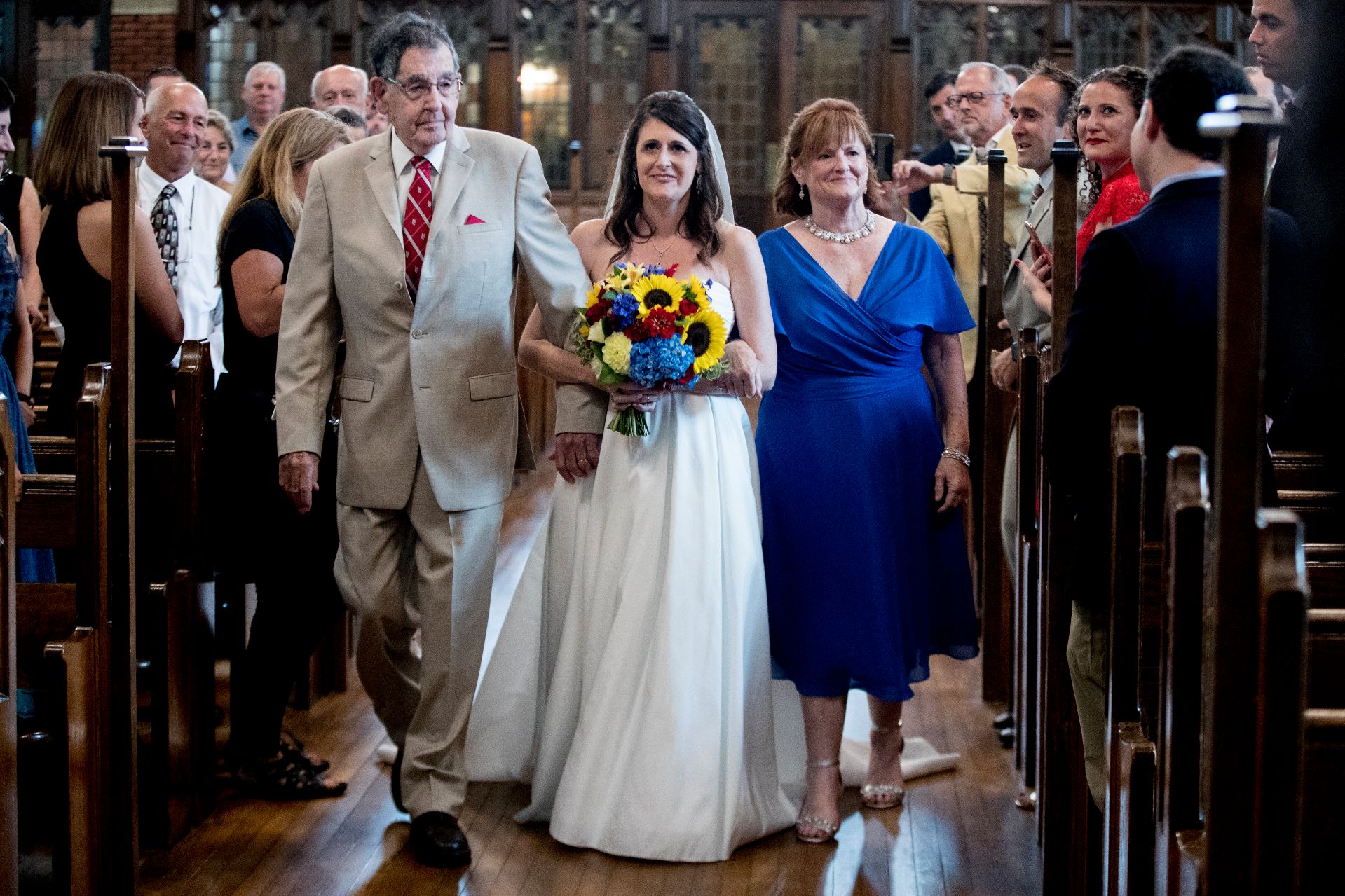 Elizabeth Merrill ’00 is walked down the aisle by her parents, Jack Merrill ’56 and Diane Merrill. (Phyllis Graber Jensen/Bates College)

To “test the waters,” Merrill said, in January 2015 the pair met in Minneapolis and stayed with Rudasill’s old roommate, Ted Martin. At Martin’s house, a romance finally blossomed.

Their getting together initially surprised their Bates friends. But then, things clicked. Memories took on new meaning. At one point during the junior-year party in JB, Merrill had got hold of Rudasill’s camcorder. “My sister watched the video about a year ago, and she said, ‘Oh my God, you can’t take the video camera off Lawson, you’re on him the entire time.’”

Rudasill and Merrill dated long-distance at first, talking for hours over Skype and visiting each other around the country. Just a few months after that fateful trip to Minneapolis, Merrill moved to Champaign, getting a job at the Veterans Affairs hospital. Harking back to their college days, the couple threw themed parties — murder mystery, ’90s, pajama. They traveled around the Midwest and South, and back to Bates for the Reunion of Merrill’s father, Jack Merrill ’56. 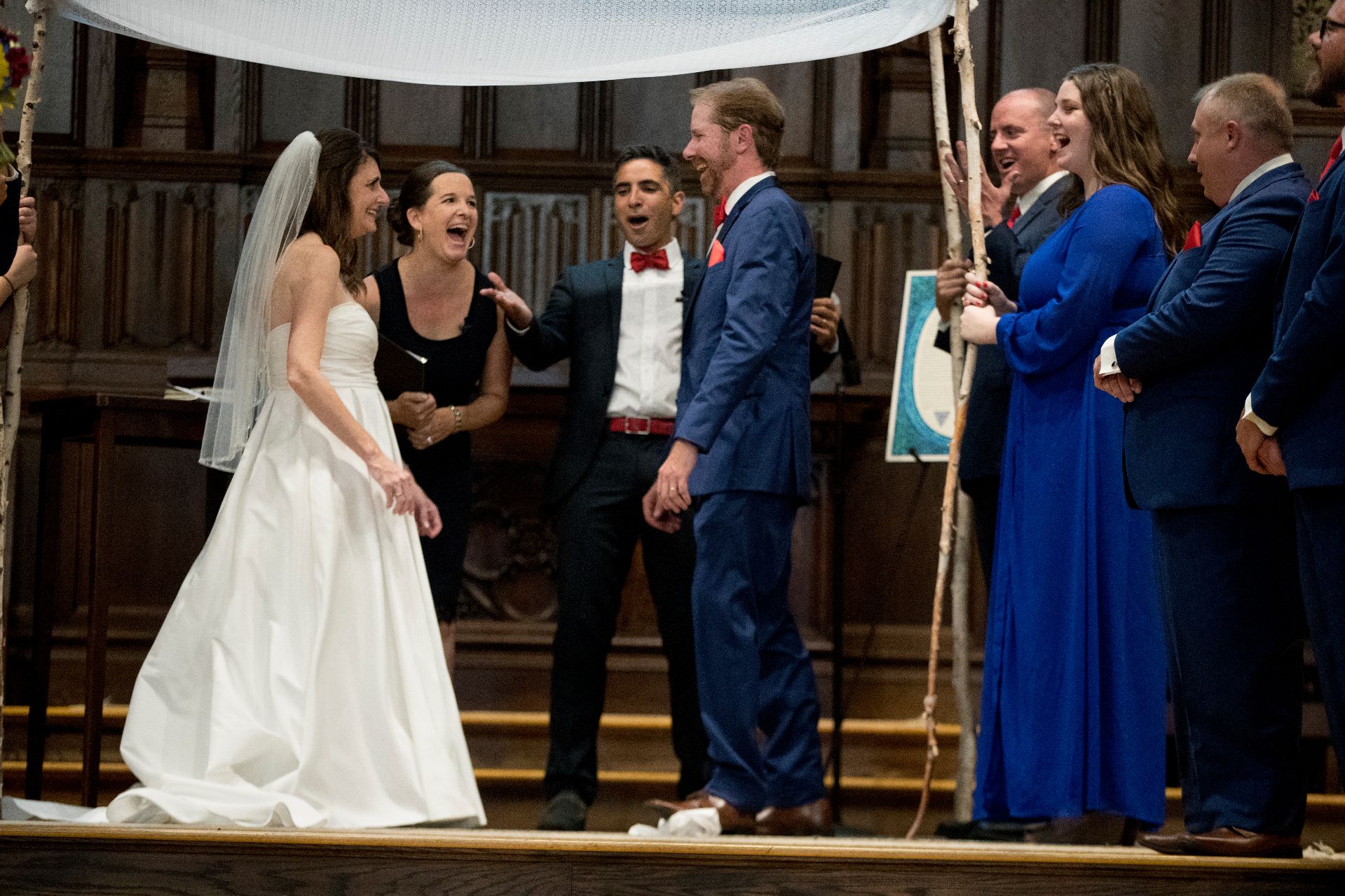 Their relationship brought their friends closer together, Pauker said, especially after they got engaged and secured one of the limited opportunities to have a reception at Bates.

“Liz and Lawson coming full circle from friendship to finding each other and solidifying the relationship at Ted’s house, they made this group kind of live again, as opposed to rehashing old times,” Pauker said. “It became a group that actually created new memories as well.”

For Merrill and Rudasill, a Bates wedding, though more than a year of conversations with Conferences and Campus Events in the making, would not be a destination wedding — the couple moved to Portland, Maine, this year.

But marrying on campus was a no-brainer. “We grew up at Bates,” Merrill said. “Some of the dearest people in the world to us are from Bates.” 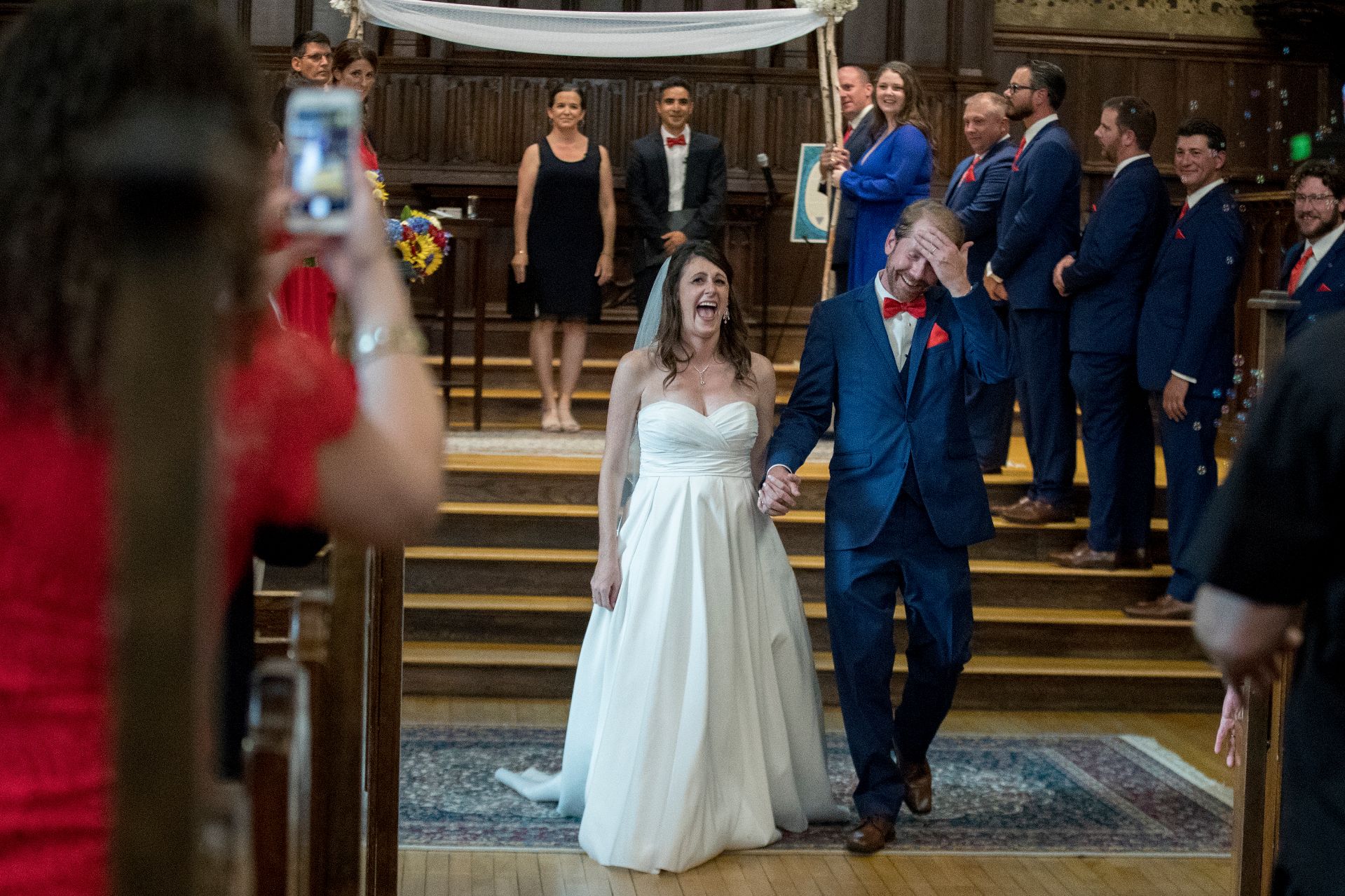 The couple’s rehearsal dinner in Poland, Maine, on Aug. 17 contained an extra surprise. Merrill and Rudasill had been trying to have a baby since 2016, Merrill wrote about their experience with IVF in the Huffington Post. They finally conceived this year, and at the dinner, they announced they were having a girl.

The following day, rain threatened but held off long enough for the bride and groom to take pictures and sign the Ketubah by the Puddle.

The Jewish ceremony in the Gomes Chapel was officiated by Link and Pauker, and Martin was a holder of the chuppah, a canopy under which Jewish couples marry. Douthat was a groomsman, Rachel Bobruff ’00 a bridesmaid, and Merrill’s sister Lauren Faison ’02 the matron of honor. 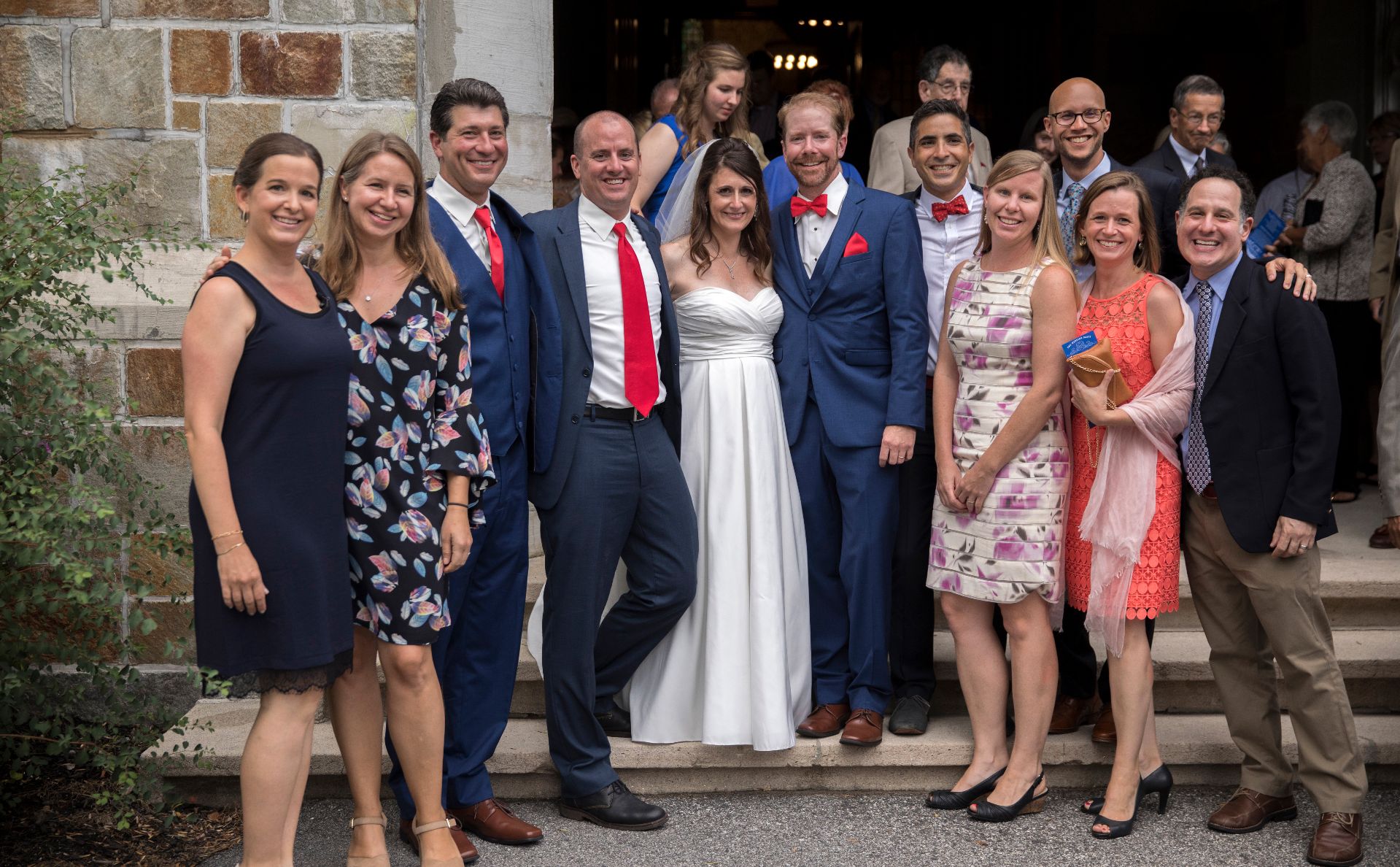 A reception in Pettengill Hall’s Perry Atrium followed. Tables were named after meaningful Bates places, like Commons, the Puddle, and JB. A jazz guitarist, Professor of Physics and Astronomy John Smedley played with his quartet, and the Bates Bobcat made an appearance during dancing.

During the ceremony, Link told the gathering of Bates friends that Merrill and Rudasill understood each other’s likes, dislikes, strengths, and weaknesses; that as old friends they respected each other, accepted each other, and could be vulnerable with each other.

“With a true friend, you can completely show who you really are and trust that they’ll still love you anyway,” Link said. “There’s really no better basis than that for a successful marriage.” 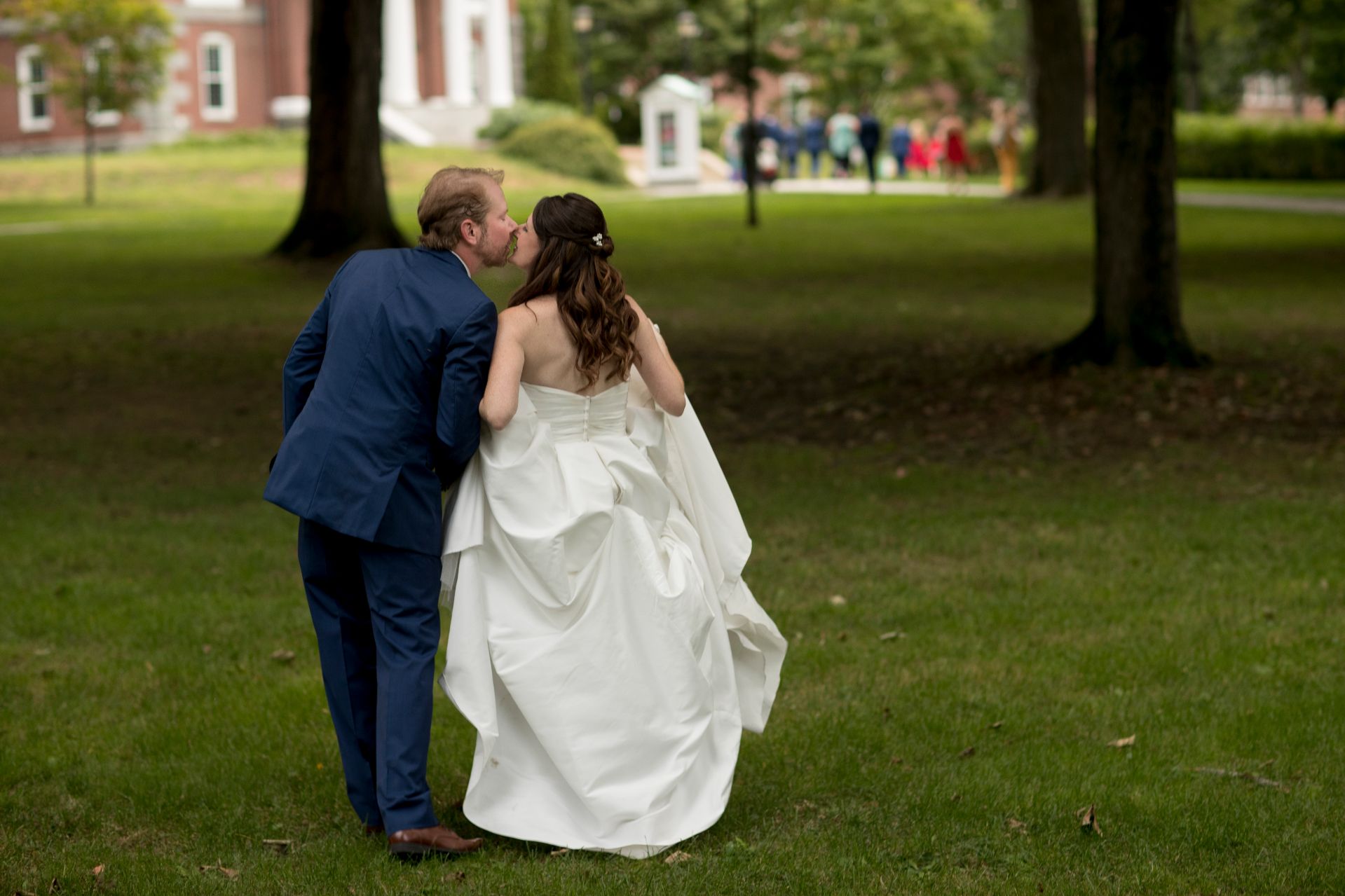 Lawson Rudasill ’00 and Elizabeth Merrill ’00 sneak a kiss after their wedding ceremony in the Gomes Chapel. (Phyllis Graber Jensen/Bates College)