For author and educator Julie Lythcott-Haims, coming to campus was more than an opportunity to discuss her memoir, Real American, chosen as the Common Read for the Class of 2022.

It also was the first chance in years for her and her family to return to the alma mater of her father, George Lythcott ’39, LL.D ’80, who enrolled at Bates after Benjamin Mays, a member of the Class of 1920 and a family friend, encouraged him to attend.

“To arrive here today and see a building with the name Benjamin Mays on it began this process of bringing me back to a place I never knew, to a time when my father walked these pathways,” Lythcott-Haims said during her Sept. 18 visit. “It is such an honor to be here where my own father was once an entering freshman.” 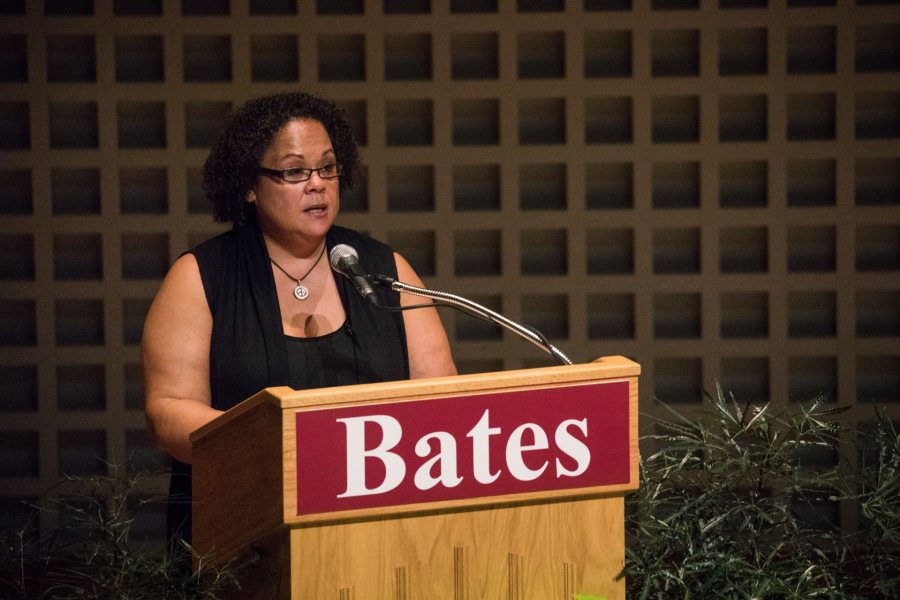 Lythcott-Haims is a former Stanford University dean of freshmen and the author of the best-selling How to Raise an Adult. In her second book, Real American, she tells her story of growing up as the daughter of an African American father and a white British mother, navigating predominantly white spaces as a black and biracial woman, and learning to accept herself and become an advocate for black people.

At Bates, she spoke with two First Year Seminars about her book and the process of writing it, and she and several friends and family members, including brother George Lythcott ’69, lunched at Commons. Later, at a talk at the Olin Arts Center, she read from Real American to an audience of primarily first-year students, and she took their questions.

The passages Lythcott-Haims read from her memoir focused on her father, a prominent pediatrician who was assistant surgeon general under President Jimmy Carter. “He was formidable, commanding, gruff, loving, and funny,” Lythcott-Haims wrote. “…Daddy was the protagonist, the lead. Daddy was the sun.”

The son of a doctor who served the black community of Tulsa, Okla., Lythcott majored in biology at Bates and was a sportswriter and sports editor for The Bates Student. A track standout, he helped Jesse Owens practice for the 1936 Berlin Olympics.

In addition to practicing medicine, Lythcott taught and ran programs at New York University, the University of Oklahoma, Columbia University, and the University of Wisconsin. He also worked with the World Health Organization on a number of projects; in the 1960s, he led the effort to eradicate smallpox in West and Central African countries. He met Lythcott-Haims’ mother, Jean Lythcott, in Ghana, and Lythcott-Haims was born in Nigeria.

Racism is “agnostic to class and to the degrees you have and to who your daddy is.”

In the Department of Health and Human Services under President Carter, George Lythcott  “conducted a major nationwide drive by black physicians to vaccinate minority children against childhood diseases,” the New York Times said at the time of Lythcott’s death, in 1995.

In 1979, Lythcott wrote an essay for Bates Magazine “Health Care: A Matter of Priorities,” in which he said that efforts to improve access to healthcare among American minorities were “desperately small compared with the need, and speak poignantly of the necessity to change our priorities.” He received an honorary degree from Bates in 1980.

When Ronald Reagan was elected, Lythcott and his family returned to Wisconsin, where Lythcott-Haims spent most of her childhood.

Hers was a childhood of relative privilege, she said. But racism, she learned, is “agnostic to class and to the degrees you have and to who your daddy is,” she said during her talk.

At Bates, where he was one of very few students of color on campus, her father was “a Black man who in the construct of New England in the 1930s had little agency,” she wrote in Real American.

“He was a man of great intellect, tall and strong, still subject to being called ‘boy’ by any white man at any moment. He was capable and accomplished, yet subject to being second-guessed or blamed without cause.”

Lythcott-Haims herself, she wrote, grew up feeling like an outsider in her primarily white Wisconsin hometown, whether it was the strange looks she sometimes received while walking with her parents or having her academic achievements questioned. One of the worst instances Lythcott-Haims detailed in Real American was when, on her 17th birthday, someone wrote a racial slur on a decoration on her high school locker. 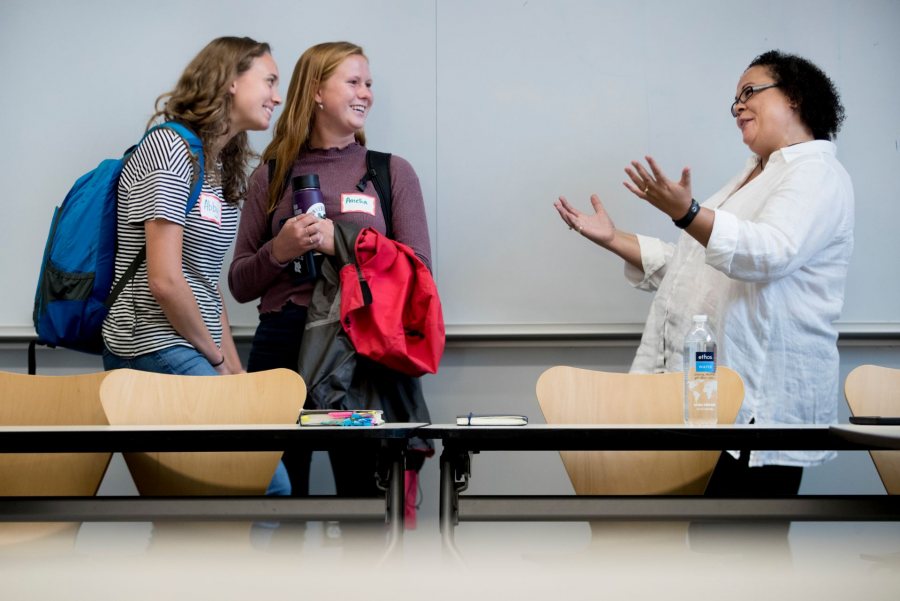 “I was subjected to the things we call these days microaggressions, those small slights and insults which over time can add up and feel like a drainage pipe above my head, dripping onto me, and, over time, with its volume increasing, starting to distort my sense of self,” she said.

By the time she was attending Stanford and then Harvard Law School, her experience of racism had turned into self-loathing, she said.

“I was finally seeing myself for the first time in my blackness.”

“I was outwardly successful, ‘making it,’ attending the so-called right schools with the brand names, corporate lawyer, earning money, university dean,” Lythcott-Haims said, “and I’m inhabiting the space of self-loathing, which means I was performing the part I felt I needed to perform so as never to be called the N-word again.”

This period of self-loathing lasted for decades, into Lythcott-Haims’ 40s. By that time, she said, with age she had become less concerned with what people thought of her, and at Stanford, an executive coach helped her understand her reactions to others’ racist assumptions and stereotyping.

One day, Lythcott-Haims said she was finally able to admit that “racism had so gotten to me I believed it,” and was therefore able to reject it.

“Admitting that, out loud, was a catharsis that would send me on a trajectory to becoming incredibly self-accepting and self-loving, and ultimately, to be able to share with other black folk and people of color more broadly these things, to write a book,” she said.

Over time, Lythcott-Haims “cultivated a practice” of recognizing her own biases and experiencing and expressing compassion, she said. She also saw her upbringing with a different perspective, which included questioning her parents’ decision to raise her in a mostly white town. And she became more of an advocate for people of color, speaking out in particular against police violence. 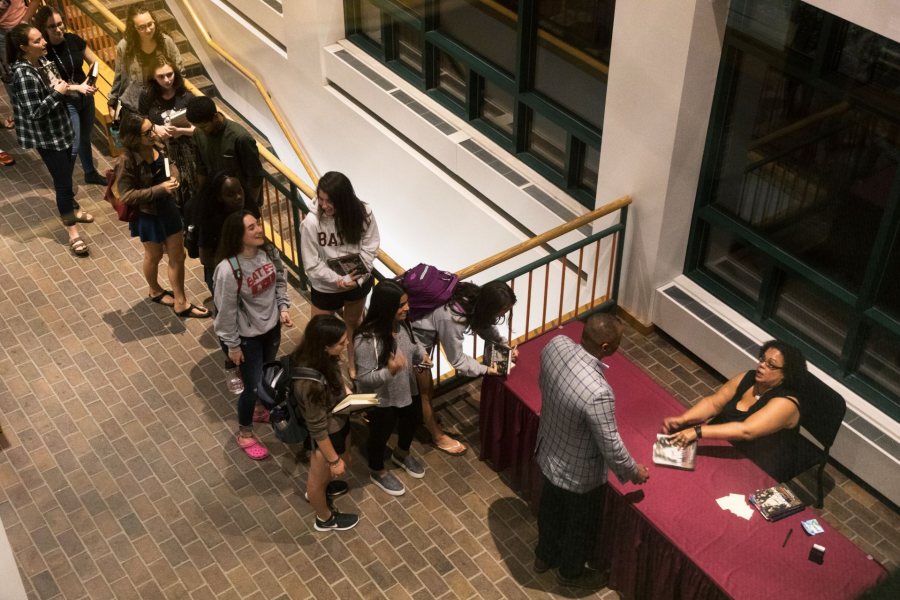 Students line up to have copies of Real American, the Common Read for the Class of 2022, signed by the author. (Theophil Syslo/Bates College)

“It is our obligation in this country, in this time, to be the people who say, ‘We’re not going to abide by this anymore, that every single human being is a human being who matters,’” she said. “We say, ‘Black Lives Matter’ not because we’re black supremacists, but because we simply beg, ‘Can’t black lives matter, too?’”

In her talk, she urged people who are “adjacent” to racist thought to sit with friends and family members and work to change their minds. Asked by a first-year student how to spread compassion on campus, she said not to forget the “excruciating level of the one-on-one.”

“This is about individual interactions with one another in the dorms, in Commons, in the classrooms, on playing fields, back at home, at Thanksgiving,” she said. “It is to be that person who is a paragon of kindness and compassion. You will make others want to be around you.

“We as individuals have the power to transform the human experience, if we can start focusing on these things like compassion, kindness, love.”