If you think of Ladd Plaza as a really big family room that has been getting a makeover, they’re now moving in the furniture.

The Ladd Library Plaza project isn’t quite complete — but it’s complete enough that the library’s main entrance, accessed from the plaza, will be back in service on Oct. 1. The side entrance facing Hedge Hall will return to emergency use only.

With the plaza’s paving essentially done, the concrete bases for seven benches were placed around the site starting in mid-September. Essentially shallow boxes measuring six feet square, these will be covered and then topped with wooden slats for the actual seating surface. 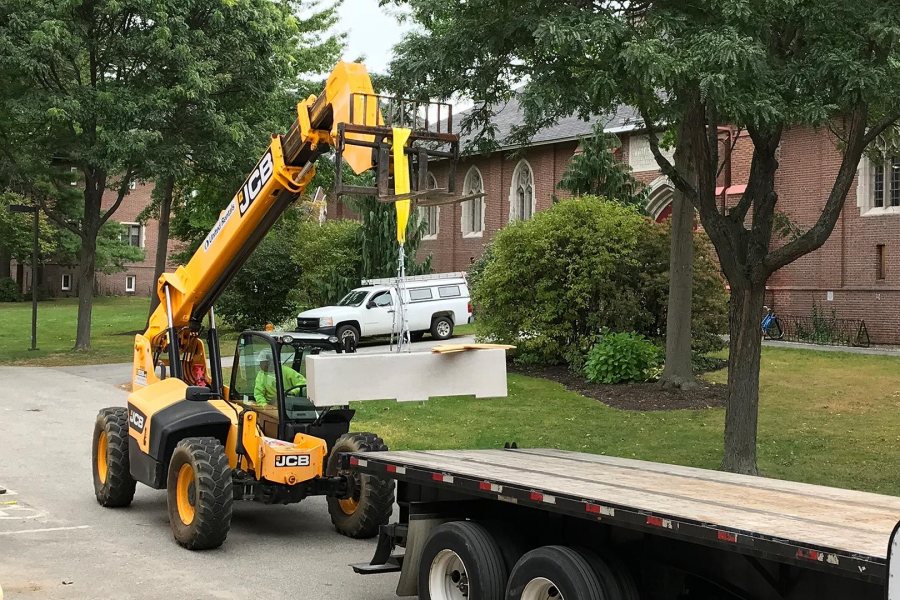 As with the cuboid benches over on Alumni Walk, bulbs concealed inside the Ladd seating will cast attractive pools of light onto the plaza.

And the amenities kept on coming arrived soon after our Sept. 24 visit: planters and combined planters-benches. Also 6-by-6, these will demarcate a rectangle centered around the top of an elevator shaft, which will now be covered by a planter. (It was formerly hidden by a low pyramid made of brick and railroad ties.)

Getting the heavy furnishings into place has been an adventure. Delivered to a staging area near Chase Hall, each unit was carried over to Ladd by a Lull — the brand name for a hybrid forklift-tractor that, thanks to its proprietary telescoping lift arm, can move heavy things into and out of awkward locations, like a plaza 10 or 15 feet above ground level. 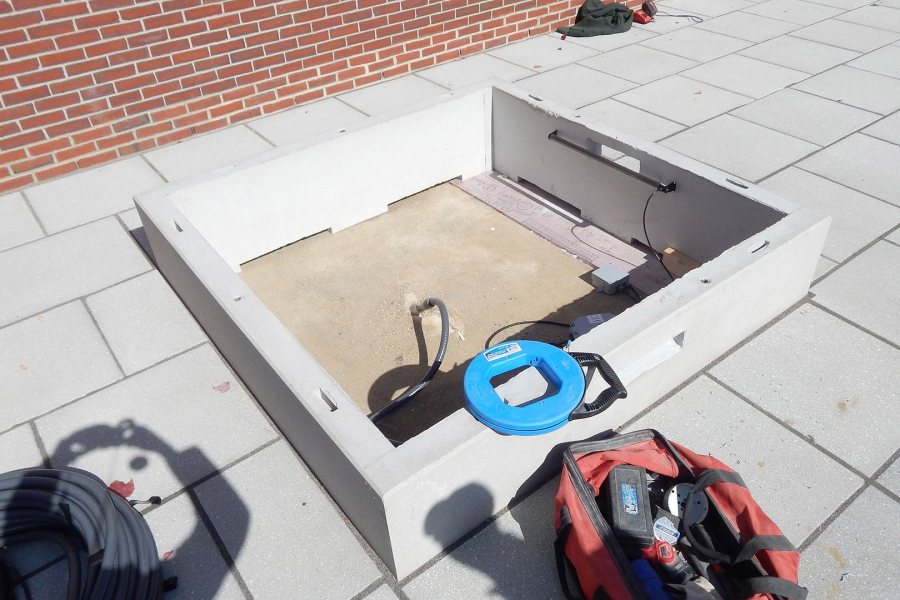 A view into one of the square benches on Ladd Plaza. The black light fixture will shine through the adjacent slot. (Doug Hubley/Bates College)

Once boosted up to the plaza, the benches and planters were carried into place by something that we will call, though nobody else will, a galamander. In no way involving congressional districts or elusive woodland amphibians, the original galamanders were contraptions used in the horse-powered days of Maine quarrying — rugged high-clearance wagons under which your hunks of granite, Parmesan cheese wheels, etc., could be slung for transportation.

The Ladd Plaza galamander, jury-rigged by the workers of project management firm Contracting Specialists, consists of a section of scaffolding equipped with wheels for rolling (human, not horse, powered), and heavy beams and chains for hoisting.

The final major chore on the plaza itself is the installation of metal posts and cables, along with a base course of masonry, in sections of the parapet wall enclosing the plaza. A manufactured product with a sandstone texture, the masonry will keep loose items from blowing or rolling off the plaza onto innocent bystanders below. 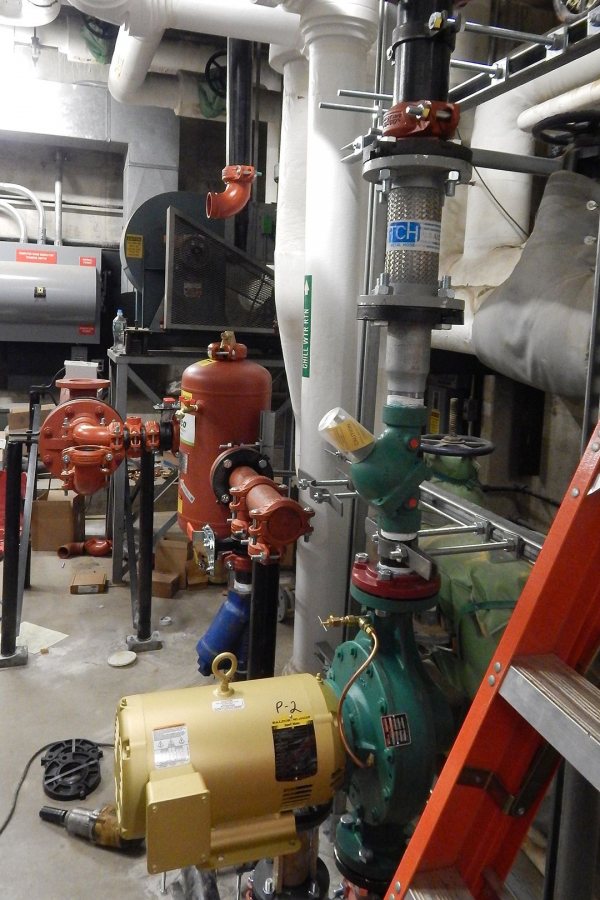 The red, green, yellow, and black machinery is all part of the system that will warm an antifreeze mixture and pump it through tubing that will melt snow off Ladd Plaza. (Doug Hubley/Bates College)

Project manager Paul Farnsworth pointed out a clever system of slots and notches on the masonry pieces that allow them, first, to expand and contract with changing temperatures; and second, to conceal the fasteners that hold the whole works together.

Speaking of clever systems that you will likely never see, Farnsworth also took us to the Ladd Library mechanical room to observe progress on the plaza snowmelt system — the moving parts of the system, as opposed to the radiant tubing now embedded in the plaza. The space was a dim jungle of pipes and pumps and heat exchangers, enlivened with about 100 decibels of sound from a technician’s power tools. We were in our element.

About halfway complete, the machinery will “be done before we need it,” Farnsworth said. The heart of the snowmelter comprises a heat exchanger that will use the campus steam supply to heat a mixture of water and glycol — much like the antifreeze you use in your car (but nothing like the way you make antifreeze by taking away her woolen pajamas); and two pumps to circulate the mixture through the radiant tubing.

Taking us through Ladd’s ground floor, Farnsworth pointed out the antifreeze pipes crossing the ceiling between the mechanical room and the plaza. Instead of making a beeline, the pipes jog back and forth. “Those offsets in the pipe run allow movement to happen” as the pipes expand and contract with changing temperatures.

Upping ramps: Quickening to a gallop in September was construction of the access to Ladd Plaza at the north end of Coram Library, near Dana Chemistry. This followed weeks of site work that was complicated by the simultaneous need to bring materials for rebuilding the plaza in through this same constricted, sloping strip of terrain.

The access will consist of two ramps: an asphalt walkway and an ADA-compliant ramp parallel to it. Accommodating folks with mobility impairments, the latter will include handrails and, about halfway along, a level landing to provide relief from the slope. 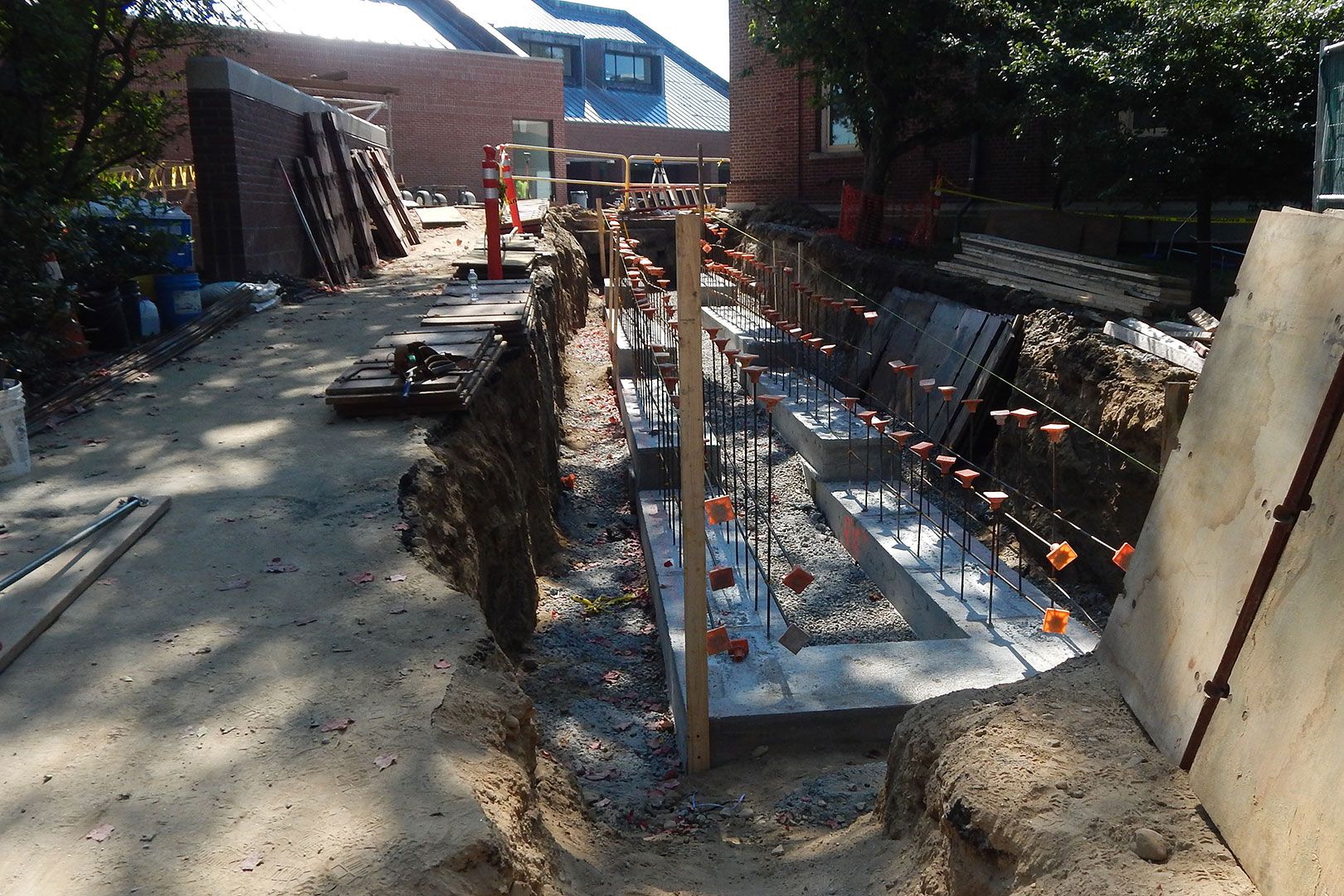 Progress on the ADA-compliant access to Ladd Plaza on Sept. 17. (Doug Hubley/Bates College)

That ramp is being built to last. The two deep concrete frost walls that run its length were poured a couple weeks ago. This week they were topped with a textured concrete slab. The asphalt ramp will appear during the college’s October recess.

This configuration, by the way, emerged after long consideration of other options. With the steepness of the grade a determining factor in the ADA requirements, a different possibility was to ease the slope by raising the walkway at its base on the Historic Quad.

But no! Modeling that option out to its logical conclusion — “chasing the grade,” as Farnsworth called it — revealed that it would necessitate elevating the Ladd-Hedge-Roger Williams road all the way over to the Library Arcade, producing a host of other complications. 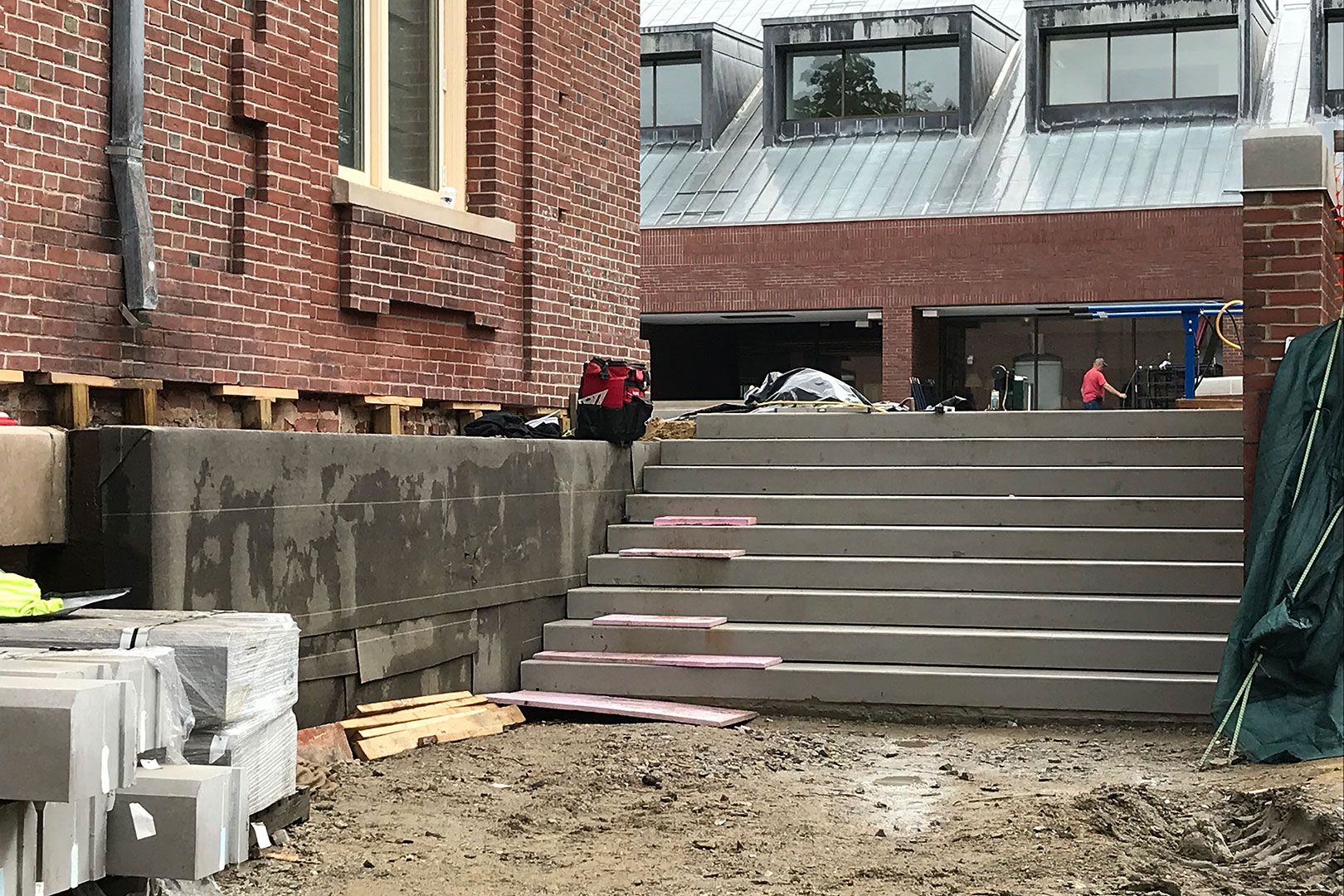 The steps are in place on the south access to Ladd Plaza on Sept. 26. Note the new concrete half-wall sheathed in a waterproofing material and placed against Coram Library. (Doug Hubley/Bates College)

In comparison, redoing the plaza access at the other end of Coram, near Carnegie Science, was a piece of cake. Here the stairs are nearly done. We were interested to observe a new concrete half-wall butted up against Coram along the steps: This covers up a feature that was similar but angled in a way that would look off-plumb in the new configuration.

The steps poured here in late July are not the ones you will actually walk on. Instead, they support manufactured stone steps made of the same sandstone-finish material found elsewhere on the plaza. Gravity does the hard work of keeping the steps in place (another reason to be thankful for it), but it’s assisted by pins on the sub-stairs that fit into slots underneath the steps themselves. Again, this system holds the steps in position while allowing them — you guessed it — to embiggen or smallify with temperature variations.

A plug for Commencement: Meanwhile, after a lull (the lowercase kind without the proprietary telescoping arm), Coram Terrace work resumed last week. Specifically, infrastructure was implanted in the Historic Quad lawn that will simplify life for the people who provide sound reinforcement and the video livestream at events like Commencement. 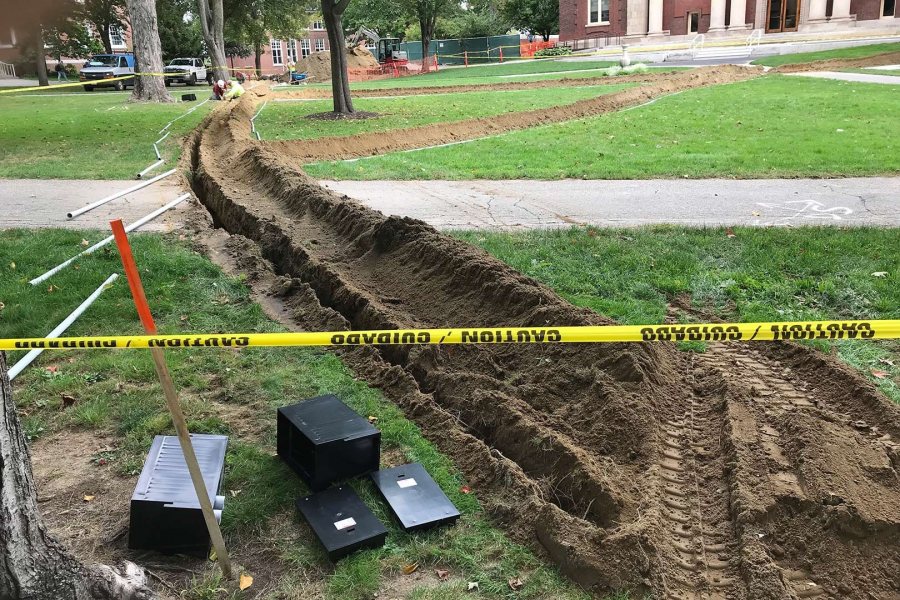 “We have a mole problem,” joked project manager Paul Farnsworth. In fact, these trenches crossing the Historic Quad are for conduits providing connections for sound and video at major Bates events. (Doug Hubley/Bates College)

Video cameras and the sound mixing board are set up some distance from the “stage” at Coram. This gives the videographers good angles, and the sound operator a sense of what the audience is hearing. Traditionally, these outposts were connected to their respective systems by cables that were run across the grass and then covered with so-called cable ramps so they don’t trip people. That arrangement is awkward and slow to set up.

So last week workers from Davis Landscape and Deblois Electric joined forces to create three permanent connection points out in the lawn for the sound board and cameras. Conduits bearing cables for electricity, audio, and video were buried in trenches, and boxes with plug-in connectors were set into the turf.

The boxes are not only waterproof but airtight: Closing them up creates an air pocket that, like the air trapped under a diving bell, keeps moisture out. The cables meet at a master connecting point at Coram Terrace.

So that’s some more cool technology that’s hidden from view. But soon to begin is a phase of the terrace work that you can’t miss: installation of the granite that will cover the terrace itself. The first step is to cover the vertical faces of the wall at stage front. 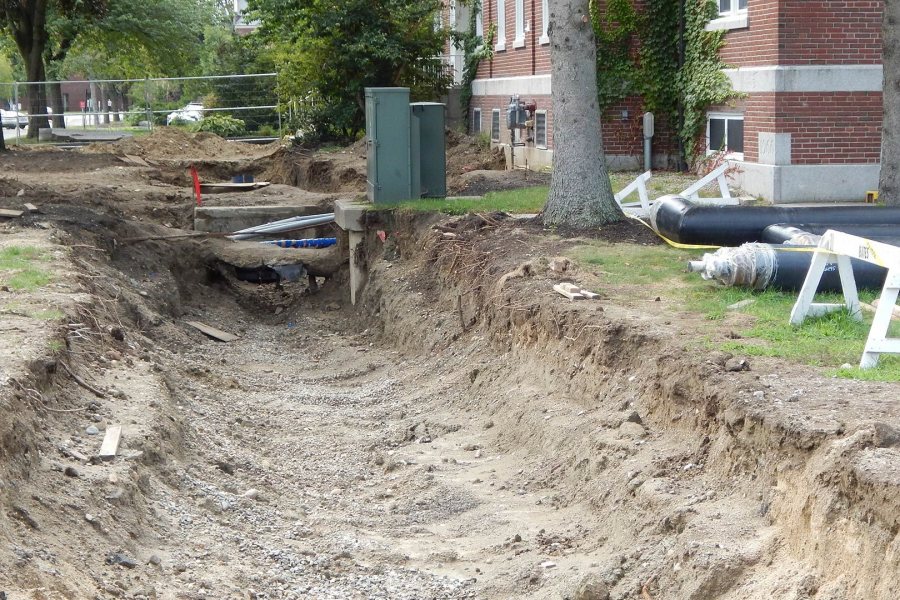 The trench for the final run of the campus steam main by Wentworth Adams Hall. The pipes will be laid and the incision closed by early October. (Doug Hubley/Bates College)

This just in: Alan Kelley, project manager for the utilities upgrade on North Bardwell Street, reports that progress will likely resume in early October. You’ll recall that new steam pipes had to be fabricated after the discovery of uncharted telecommunications conduits (more hidden technology!) forced a change in the steam-main route.

The new parts are shipping at the end of this week, says Kelley, mechanical and electrical services manager for Facility Services. “Expect arrival mid-next week. ATA Piping will get right on the installation when they arrive.”

Can we talk? Send your questions and comments about past, current, and speculative construction at Bates to Doug Hubley. Please put “Construction Update” or “My aunt didn’t think that was funny!” in the subject line. 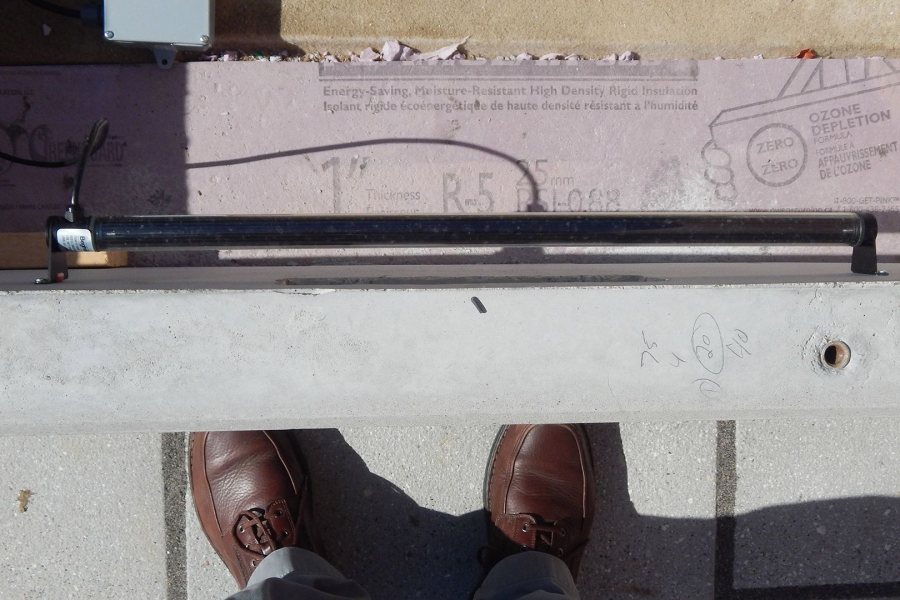