Spring 1961 and Bates has its first ‘fraternity’

At a college where the absence of fraternities has defined student life, if not the college itself, what are we to make of the mock fraternity, Rho Beta Phi, that existed in the early 1960s?

Perhaps we need to know what the mock fraternity was mocking. We know that its members were close-knit residents of Roger Williams Hall, which at the time was a men’s residence. (Rho Beta Phi stands for Roger Williams Fraternity.)

And we know that the administration occupied the Bill’s first floor back then, as Lane Hall didn’t open until July 1964.

So perhaps RPB was having some fun at the expense of their first-floor neighbors. 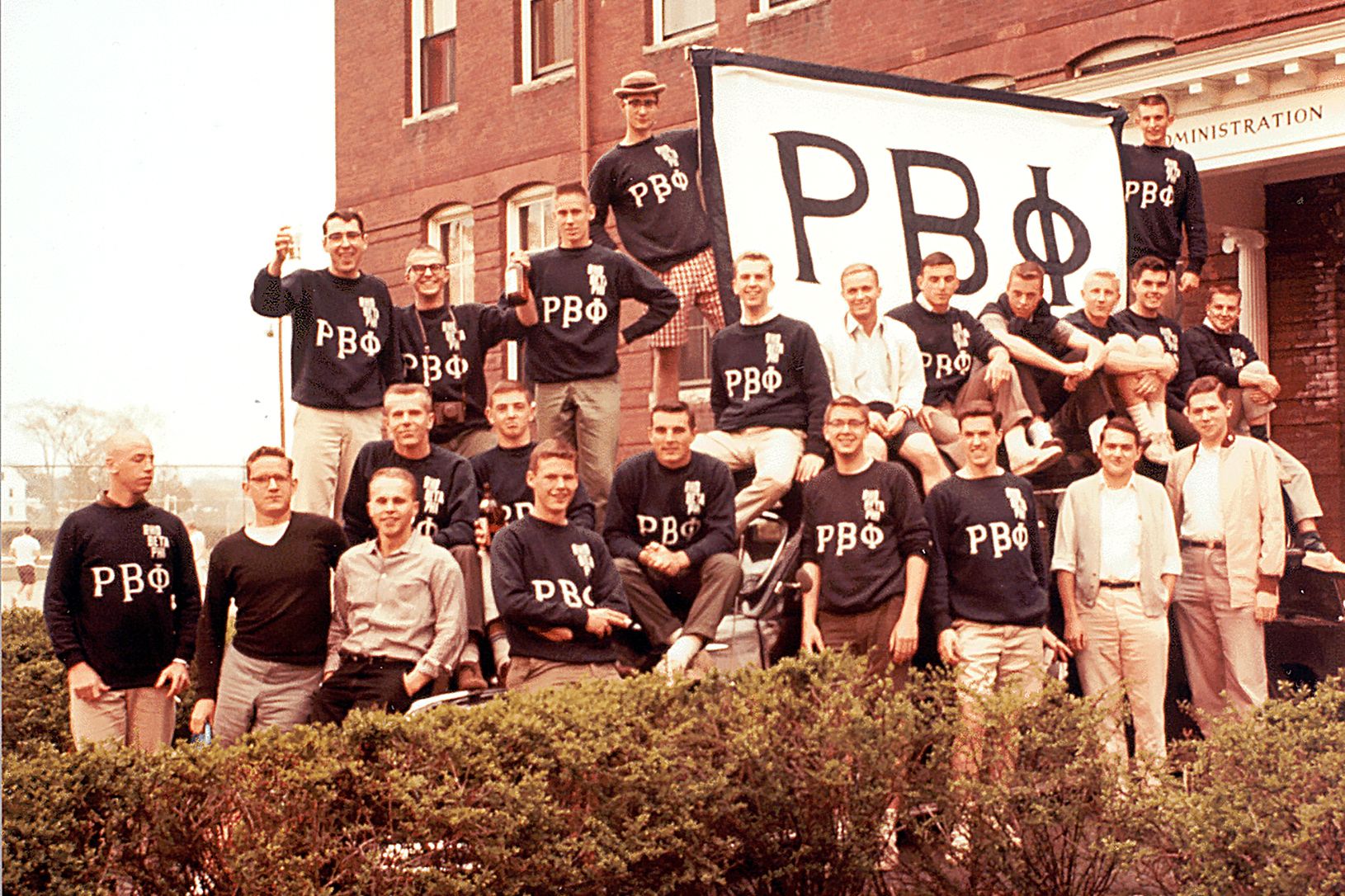 Outside Roger Williams Hall, which then housed administrative offices while also serving as a men’s residence, members of the Rho Beta Phi “fraternity” gather on and around “the Hearse” in the spring of 1961. Photo courtesy of John Meyn ’64, who is standing fourth from right.

Famous as Bates’ different-drummer dorm until being renovated as an academic building for language study, the Bill and its denizens firmly coalesced around the RBP banner as “the identity of close-knit Roger Bill friends, with no higher meaning,” says Meyn.

A sign was posted outside the Chapel one morning: “We Give S&H Green Stamps.”

“Roger Bill was as likely a dorm as any to bring out the fraternal spirit,” said John David ’64 in 2008. “Small enough in population and centrally located at the hub of campus life, with the administration on the ground floor,  tennis courts behind, and close to Garcelon Field.” (David passed away in 2014.)

A mild example was the sign posted outside the Chapel one morning prior to the required weekly service: “We Give S&H Green Stamps.”

A more potent example was the Volkswagen Beetle found inside Coram Library. A stunner was the prankster(s) who locked the entire college community inside Garcelon Field (which was enclosed in those days) during the annual all-college photo.

The Roger Bill friends were “fun-loving, mischievous comrades — certainly,” says Richard Crocker ’64, the sign-holder who’s wearing a hat in the photo above. And it was a “fraternity” in name only, he adds: no hazing or initiation rituals. “Everyone in Roger Bill who wanted to so identify was in.” 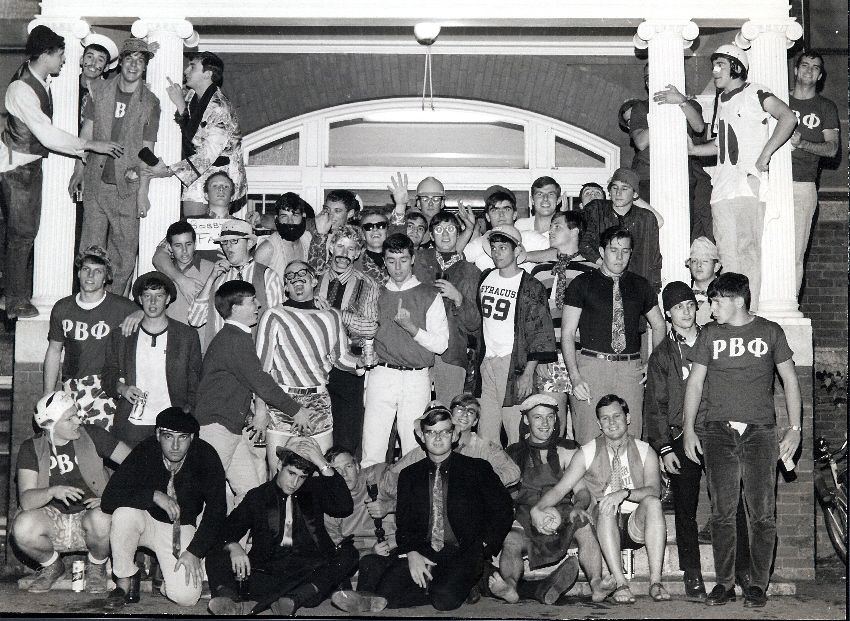 There were rivalries with the other all-male residences of the day, including John Bertram, Parker, and Smith, complete with a Clay-vs.-Liston bout fought by Siamese fighting fish.

There was a sanctioned RBP dance in April 1961, the kidnapping of the popcorn machine from the Den, and the ice blockade of Bardwell Street, then a city lane passing through campus in front of the Bill.

The button-down 1950s were about to become unbuttoned.

For a similar vibe, consider the movie Animal House, which is set about the same time, in 1962, at “Faber College,” and drew from its creators’ college experiences in the early and middle 1960s. It’s as much about restless students vs. a dug-in administration as it is about Deltas vs. Omega.

Even the sweatshirts that the Bates RBPers are wearing in the photograph, procured by Stuart Field ’65, strikingly resemble Bluto’s “College” jersey. The RBP banner was designed by the late Richard Jeter ’63, who would go on to become an architectural lighting designer.

As at the mythical Faber, Bates in the early ’60s saw students and decision-makers beginning to joust over social rules, which had changed little in decades and tended to keep men and women apart. The button-down 1950s were about to become unbuttoned.

Indeed, the campus was segregated by gender. The men ate in Memorial Commons and lived in Roger Williams, Smith, John Bertram, and Parker. The women dined in Rand Hall, living there and in Page Hall and in wood-frame houses along College Street, Campus Avenue, and Frye Street.

According to a contemporary Bates Student poll, for example, students believed that the college was using restrictive blue-slip policies to quash small gatherings between men and women — and the chance that students might have sex.

So men and women found other ways to get together, like piling into the RPBers Billmobile, also known as “the Hearse” because, well, it was a hearse, “a fairly tasteless mode of transportation” that four RBPers bought for $80, Meyn recalls.

On the up side, “Hearses can carry a lot of weight,” so it was perfect for carrying kegs and lots of students to the local drive-in, where one evening’s short subject was when the boys mooned fellow moviegoers from atop the vehicle.

Beyond memories, the feeling of fraternal friendship is what’s always been most real and present among RBPers, says Crocker.  “I would hope that any account of the Roger Bill ethos of the ’60s would focus on the close community that emerged among strangers that chance put together.”

That’s the reality, since memories can fade, he acknowledges. “Take all of this through the lens of someone now retired, sitting here with a cat in his lap, waiting for the rain to stop so he can go out and tend the flower beds,” muses Crocker.

“Where do the paths of nostalgia and fantasy cross?”

Some material for this story was published in Bates Magazine in 2008.