“When was the last time that your joy was prioritized?” award-winning author Gabby Rivera asked her Bates audience.

Prioritized, she continued, “by the institution that you go to school in, by your family, by your peers, by yourself, by your government, by your community — your actual, radical, majestic joy?”

“When was the last time that that was seen as valuable?”

The students had come to listen to Rivera, a queer Latinx woman who is revolutionizing pop-lit’s depiction of the comic-book hero with America Chavez, Marvel’s first queer Latinx superhero. 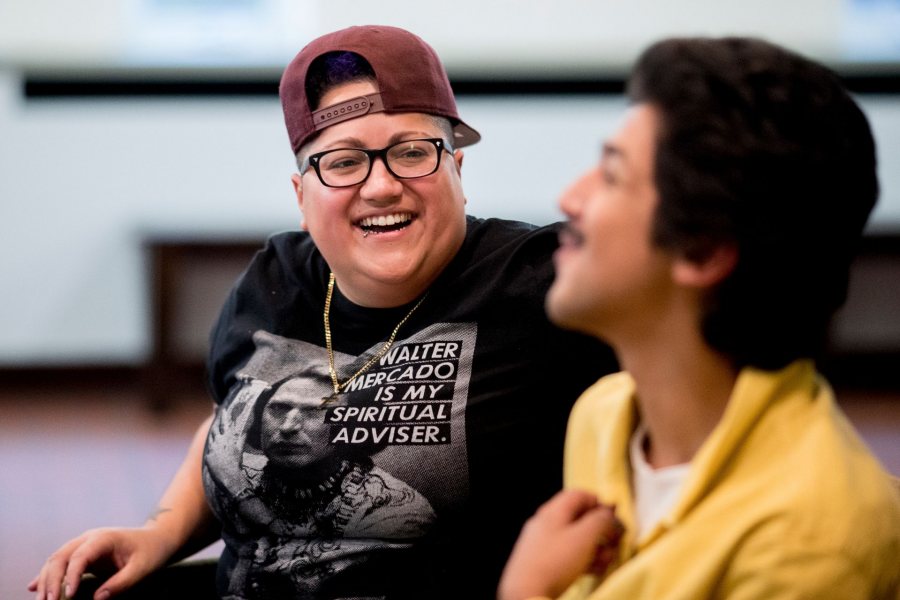 Prior to her evening talk, Gabby Rivera (left) spoke informally with students, including Topher Castaneda ’20 of Los Angeles, in the Office of Intercultural Education. (Phyllis Graber Jensen/Bates College)

As an author, Rivera uses aspects of her own life and community to shape her characters so readers of all different backgrounds and identities can relate to what they see in the pages of her books.

“There must not be any fear about showing the world what your family looks like,” said Rivera, who published her debut novel, Juliet Takes a Breath, in 2016. It tells the story of a lesbian Puerto Rican teenager who, struggling to come to terms with her identity, moves to Portland, Ore., to intern with her favorite feminist author.

Rivera explained that she wanted to tell a classic American story of self-discovery for audiences who don’t always see themselves depicted in popular culture.

“There aren’t a lot of queer young Latinos that folks can identify with,” she said. “There are moments in the story where you actually get to see Latinos being joyful with each other, having a family that is supportive, and taking the narrative that other folks have about us and discarding it.”

Part of discarding this narrative, Rivera explained, is about softening the way we talk to each other. 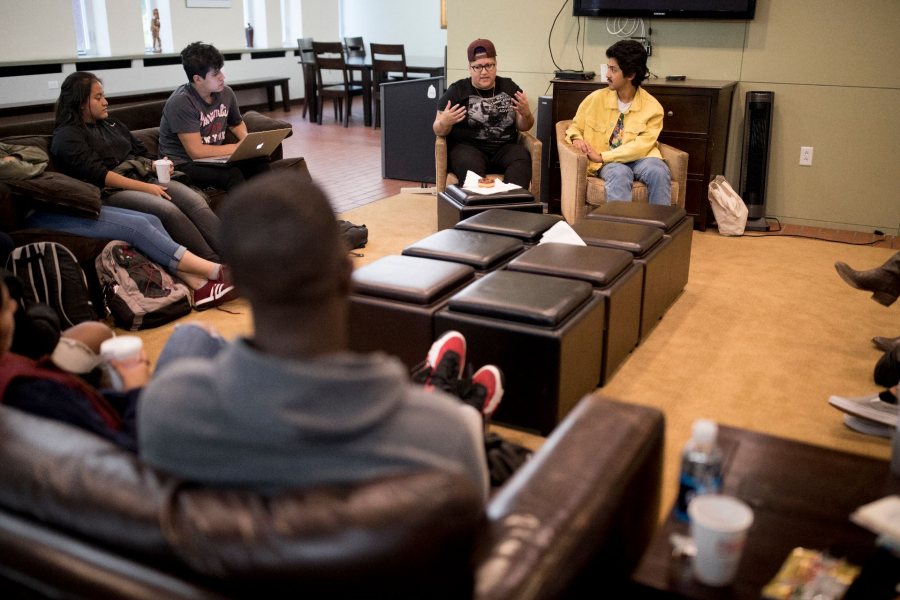 By writing about kindness, strength, family and love, Rivera embraced this softness of language, using it to create a world where people of different backgrounds speak to each other without hate. She uses softness to re-establish empathy and redefine what it means to be a hero.

“As a country, we totally bully folks who are soft,” she said. “Boys that are soft get their butts kicked. Women that are too soft are pushovers. Softness is ridiculed. I swear I feel like dudes can’t even give each other a hug sometimes unless there’s like a touchdown or something.” At that, her audience laughed.

Most recently, Rivera brought her radical softness to the world of comic books. In the United States, when we think of superheroes, we often think Superman, Batman, Spider-Man — white men off saving the world and rescuing the (usually) blonde damsel in distress.

Old comic books were notoriously sexist and racist — cue Wonder Woman being reduced to secretary of the all-male Justice League of America, or Captain Marvel owning a slave. For years, these comics painted the American superhero mostly as a heterosexual white man. 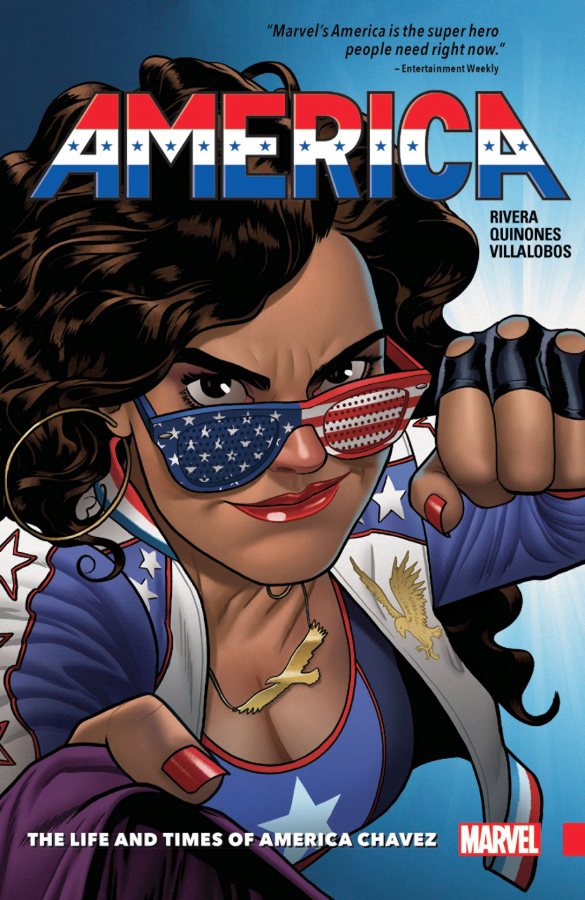 “In America Chavez’s world, she can punch through dimensions,” said Gabby Rivera, describing the Marvel superhero that she authors. (Image used with permission of Marvel)

Rivera combats this image, and the canon, as the author of America, the new Marvel comic centered around the adventures of America Chavez, aka Miss America.

“In America Chavez’s world, she can punch through dimensions,” Rivera said. “She is a Latina who can travel without papers, without ID, without Border Patrol, or any of that. She can go anywhere in the universe she wants. And that’s where the bad guys come in because they try to make her stop.”

In one panel, she even travels back in time to punch Hitler in the face — a scene, Rivera said, that recalled 1941, when the two Jewish writers of Captain America had that superhero do the same, emphasizing the injustice occurring in Europe before the U.S. joined the Second World War. 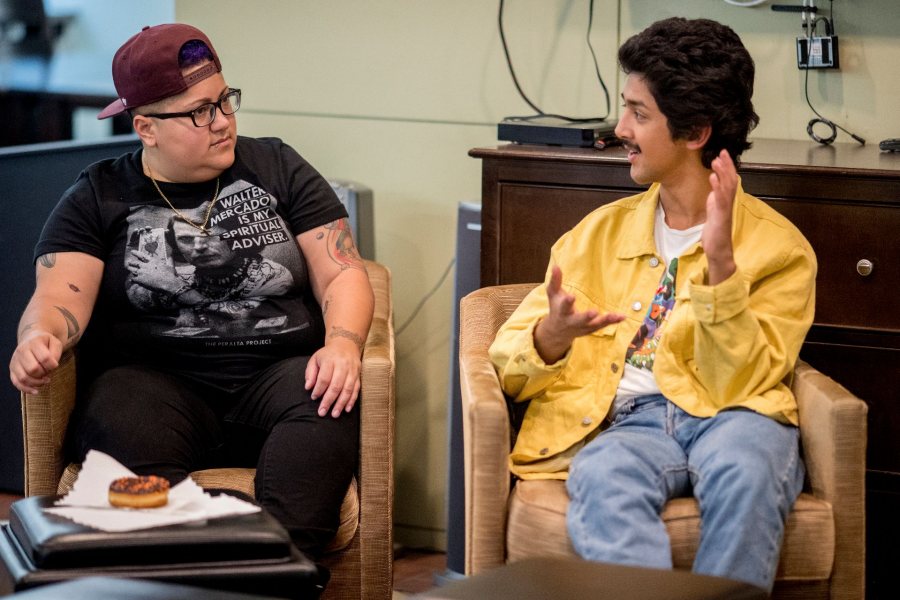 Incorporating elements of her own life, other panels in Rivera’s comic books challenge typical depictions of superheroes: America’s mothers sacrifice themselves for the universe. Her grandmother fights beside her. And, in an allusion to Charlottesville, her fellow students combat a group of men wielding tiki torches.

Rivera challenged her audience to fight oppression and continue their own self-discovery.

“And so that is why I move with queer Latinx joy.”

Video: MLK Day at Bates is a chance to ‘get vulnerable’