The college’s rowing facility on the Androscoggin River was named the Traquina Boathouse during an Oct. 7 dedication ceremony at the site.

“The Traquina name represents incredible dedication by a Bates family to our college and our rowing program,” President Clayton Spencer told the gathering of rowers, families, coaches, friends, and college leaders.

“The Traquina Boathouse will be a place of spirit, of energy, of passion, and of grace. For our rowers to have a home befitting their unparalleled talent and skill is simply spectacular.”

Completed in 2016, the boathouse was fully donor-funded by 50 Bates families who collectively contributed $2,726,000 as part of The Bates Campaign’s goal to catalyze student success.

Located several miles north of campus in the town of Greene, the boathouse was designed by Peterson Architects, a Cambridge, Mass.–based firm specializing in such facilities.

The Traquina boathouse was named in recognition of a generous leadership gift by Perry Traquina and Robin Traquina of Wayland, Mass., whose daughters, Meredith and Katherine, the latter a four-year coxswain, graduated respectively in 2013 and 2017.

“We are proud to have been involved in this project,” said Perry Traquina, adding that a keen interest in recognizing the program’s growing excellence inspired his family and fellow Bates families to support the project. 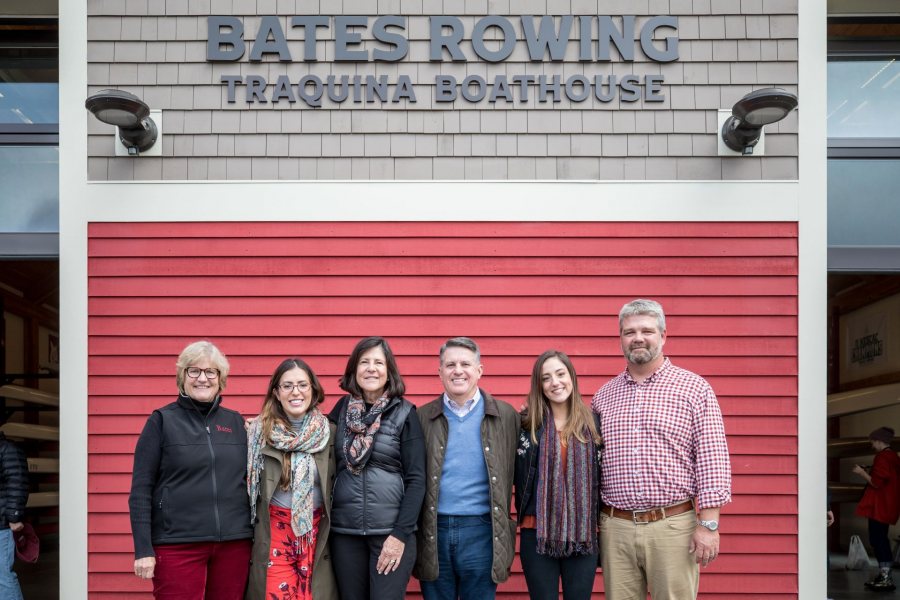 “The strength and success of Bates rowing — a culture that values hard work, teamwork, and excellence — is what made this building happen,” he said.

Bates rowing is one of the country’s premiere college programs, collecting numerous team and individual honors.

The women’s team has won three of the last four NCAA Division III championships. On the men’s side, Bates in 2018 became the first NESCAC school ever to qualify for the Intercollegiate Rowing Association National Championship Regatta.

A 2018 rowing graduate, honors chemistry major Amelia Wilhelm ’18, was recently named one of nine finalists in the 2018 NCAA Woman of the Year award. Elizabeth Sonshine ’12 has competed in the last two World Championships in the women’s quad as a member of the U.S. national team.

Sixteen Bates rowers have won All-America honors, and the program has produced two Olympians, Mike Ferry ’97 and medal-winner Andrew Byrnes ’05, who won gold for Canada in 2008 and silver in 2012.

In his remarks, head coach Peter Steenstra spoke about the power of trust in Bates rowing’s success and in the generosity of its donors.

“Trust is built into this.”

“Dedication and devotion deliver about 90 percent of a boat’s speed,” he said. That’s enough, he said, to advance a boat to a regatta’s championship round, known as the grand final.

“The remaining 10 percent, we’ve discovered, comes from care and trust. So trust is built into this. The athletes have to trust each other, their coaches, and the program. The coaches trust that we are getting the full representation from our athletes.

“And that’s what the Traquina family has shown for the Bates rowing program. Their trust, and that of so many Bates families, has literally built us a home.”