The Bates rowing program had a housewarming last Saturday, formally dedicating its new boathouse on the Androscoggin River in Greene.

While the weather outside was a bit frightful — chilly and rainy — it was delightful inside the warm and bright boathouse.

“We take pride in being the tough, gritty team from Maine. And this boathouse will not change that,” Bierman said.

But other things will change — and much, much for the better — now that the team has a boathouse with locker rooms, workout space, and secure storage for boats. 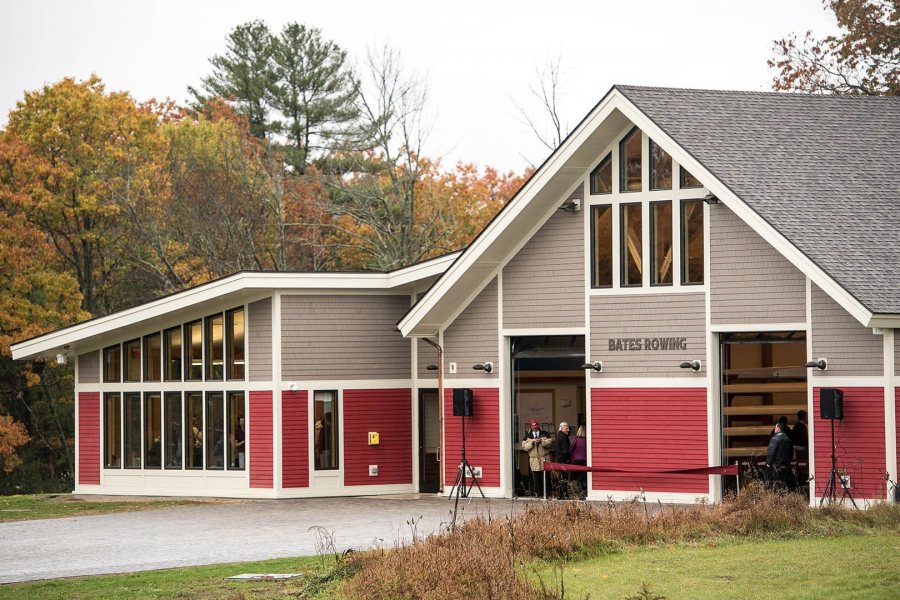 “While we’ll miss our old barn,” she said, referring to the rustic, unheated, off-the-grid pole barn of the past, “we are excited to see how much more we can grow and how much speed we can gain with a warm place to call home.”

The boathouse, 100 percent funded by donors, was dedicated on Oct. 29, nearly two years to the day after the project was announced on Oct. 30, 2014. Groundbreaking took place in April and the team began using the boathouse in August.

“This team and their inspiring coaches have earned this fabulous new boathouse,” said Spencer. “They have shown again and again that ambition, hard work, and an unwavering commitment to excellence pay off in outstanding results.”

She added, “What we see here today reflects the growing tradition of support from alumni, parents, and friends who step forward, again and again, to help us deliver the best possible experience for all Bates students.”

The Bates rowing program is one of the premiere small-college programs in the country. In 2015, the women won the college’s first-ever team NCAA championship, the men secured their first NESCAC championship, and head coach Peter Steenstra was named Division III coach of the year. The women have finished in the top three at the NCAA Rowing Championships nine times in the last 10 years.

“In everything we do, our goal is to get better — as individuals, as a team, as a program — and this boathouse is a fundamental part of that equation,” Steenstra said.

The program has produced 15 All-America rowers and two Olympians, Andrew Byrnes ’05, who won gold for Canada men’s eight at the 2008 Summer Olympics in Beijing and silver in London in 2012, and Mike Ferry ’97, a rower for the U.S. team in Sydney in 2000.

“This new boathouse provides us with a facility that is commensurate with the high caliber of the program,” said Director of Athletics Kevin McHugh. “The boathouse also announces to the rowing community and to the world of college athletics that Bates has an extraordinary commitment to excellence.”

The project architect was Peterson Architects, a Cambridge, Mass.-based firm specializing in boathouse design. Henry Gillert of Bates Facility Services was the project manager, and general contractor was Consigli Construction, which also managed the building of Kalperis Hall and Chu Hall.