In 1960, a doctoral student from California conducted an archaeological dig at a coastal site in southwest Alaska.

It was old-school archaeology, archaeologist as auteur. He excavated, took away more than 4,000 items including three sets of human remains, and in his dissertation characterized the site as a midden — essentially a dump — although his own field drawings suggested that a good-sized settlement had previously existed there.

More than 50 years later, in 2011, another doctoral student — an Alaska Native and future Bates professor — brought a very different style of archaeology to the site, known as Temyiq Tuyuryaq in the native Yup’ik language and Old Togiak in English. 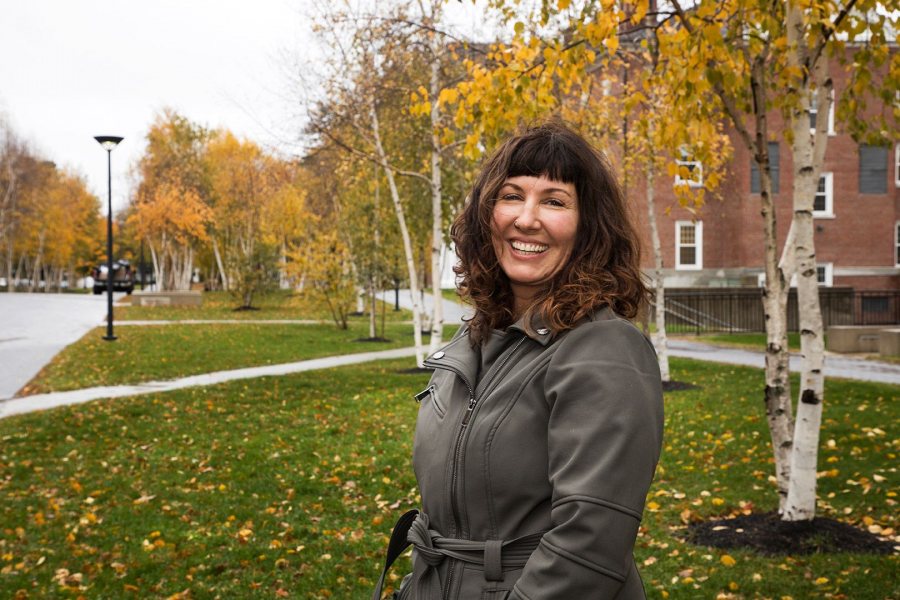 Kristen Barnett, in contrast to the 1960 visitor, returned to her native state to conduct what’s called indigenous archaeology: research that’s collaborative, driven by the needs and interests of the indigenous host community, and that addresses inequities in archaeological practice.

The community in this case, located across Bristol Bay from the archaeological site, is the Yup’ik village of Tuyuryaq, or Togiak. A lecturer in anthropology at Bates since 2016, Barnett has twice brought students to Togiak for fieldwork.

And now Barnett’s achievements in indigenous archaeology have been recognized with major grant funding from the National Science Foundation: She recently received a three-year grant from the NSF worth $706,000 in cash and equipment to continue that work.

The grant is the foundation’s first, Barnett notes, to support what’s known as a research sovereignty model, in which “indigenous peoples engage with scientific study as active participants and sovereign decision-makers, rather than passive objects of study.” 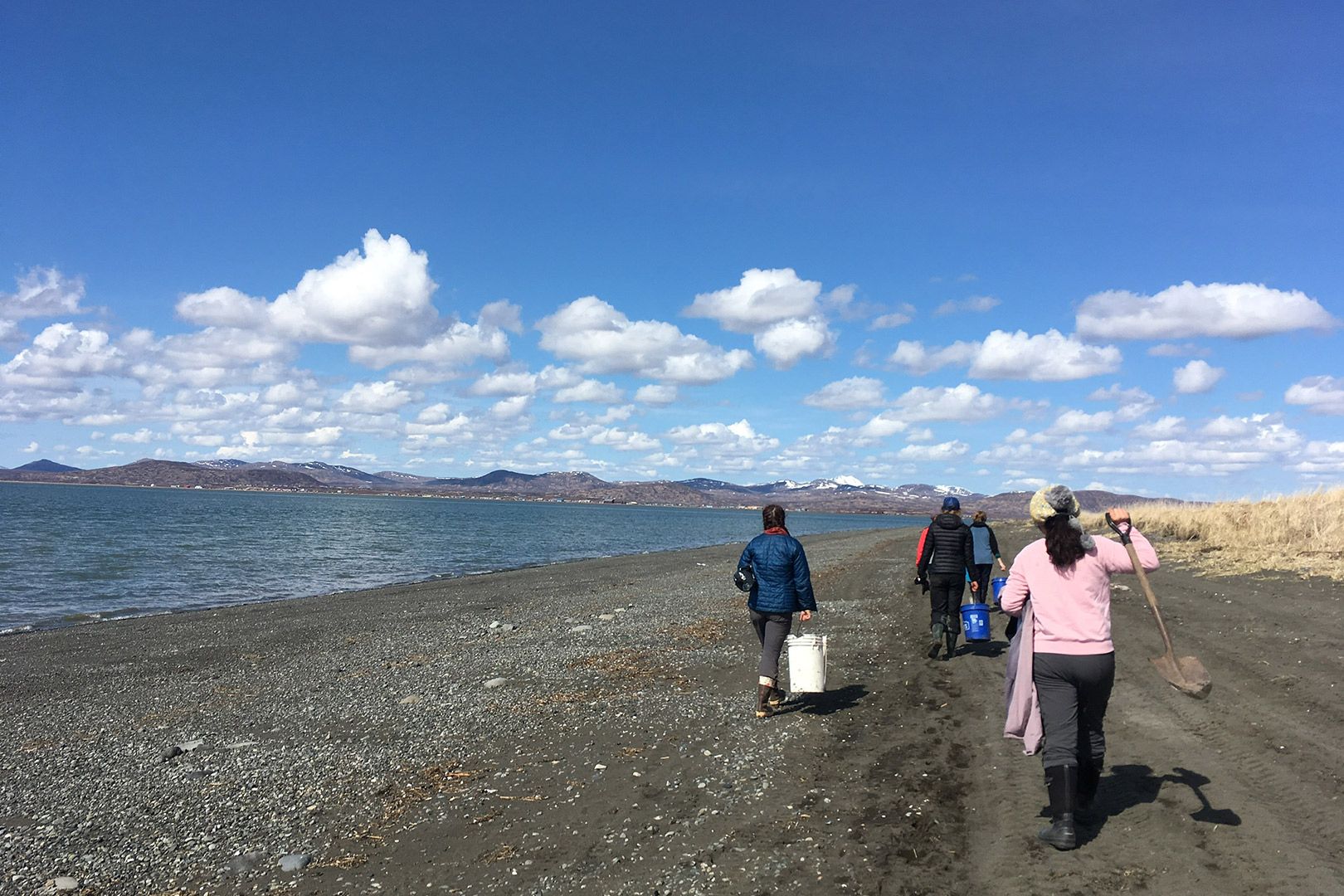 Her Togiak project is “deeply ingrained in the community in every sense,” she says. Crucially, the research is guided by the residents’ interest in the ways their ancestors lived — including their adaptations to climate and ecology, responses to colonial influence, and, as Barnett says, how the ancestral culture is continued in “the traditions and practices of their contemporary descendants.”

‘A cousin village to my own’

Starting in the late 19th century, inhabitants of Old Togiak began crossing the bay and resettling at the site of today’s village.

A grassy shore with striking views of mountains across the water, Togiak sits at the top of Bristol Bay. There’s plenty of wind and precipitation, and temperature extremes range from the high 60s in July to the low teens in the winter. (Barnett’s pre-trip instructions to her Short Term students include a warning to leave the cotton socks at home — this is a place for wool.)

“Everybody knew that if an archeologist was there, it meant that things had been taken.”

The village is accessible only by water or air. Getting there from Bates takes a series of flights, the last requiring a charter plane that holds six, necessitating multiple trips to get the full complement of a Short Term class there from the nearest large settlement, Dillingham (pop. approximately 2,400).

Salmon and herring are abundant, supporting both traditional subsistence lifestyles and a Togiak Fisheries cannery at the archaeological site — “built on top of the old village,” says Barnett.

About 85 percent of the residents are Alaska Native, as is Barnett. A member of Alaska’s Unangax (or Aleut) people, inhabitants of the Aleutian Islands and coastal mainland shared with Yup’ik territory, she describes Togiak as “kind of a cousin village to my own.” 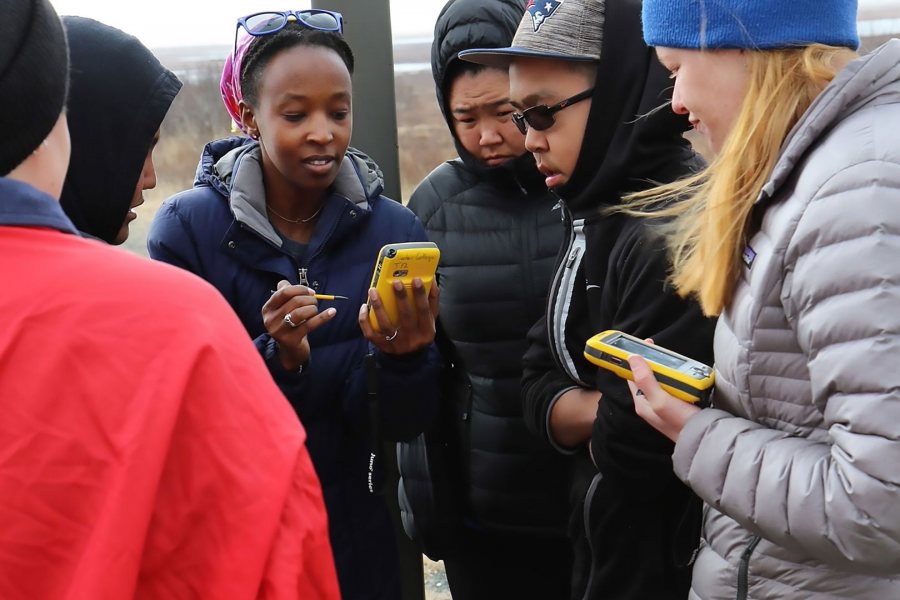 During the 2018 experiential learning week at the Togiak School, local and Bates students learn to map with GPS. (Kristen Barnett/Bates College)

Barnett was a doctoral student at the University of Montana when she first conducted research there, in 2011. “I wanted to go home and work in my own community,” she says. Given the 1960 research effort, “this seemed like an obvious place to start.”

The 2011 visit led her to recover some of the items removed from the old village in 1960, including the human remains. Not many Togiak residents knew about the old dig 50 years after the fact — but nevertheless, Barnett says, “everybody knew that if an archeologist was there, it meant that things had been taken.”

She says, “We spent a year and a half tracking things down. And after the repatriation of those, the Traditional Council of Togiak decided that they wanted to explore more archeology there as a way of reclaiming their former village as a village rather than a dump.”

With NSF support, Barnett returned in 2015 to conduct preliminary geophysical work — soil core sampling, and subsurface and surface mapping. She joined Bates in 2016, and brought 12 students to Togiak for Short Term in 2017. 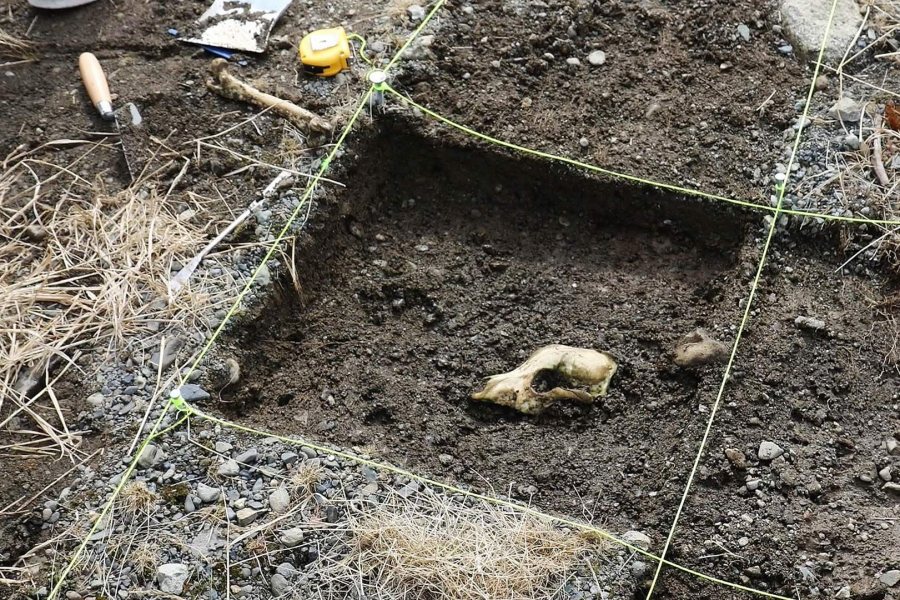 A fox skull in the grid in a 2018 point-plotting exercise. (Kristen Barnett/Bates College)

That visit and a second one, last spring, each began with a week in Togiak, coinciding with a scheduled experiential learning week at the K-12 Togiak School. The Bates team resided at the school, gave local students a hands-on introduction to archaeology — and reversed roles with the locals when they could.

“We tried to incorporate activities where they were also teaching us,” such as village tours in which the Togiak students kids pointed out places meaningful to them, says one of the seven students who went in 2018, Carter Ros ’21 of Hailey, Idaho. (Six were taking the course and another student went along as a research assistant.) The Bates group also ate seal and beaver caught and cooked by the Togiak students.

Fieldwork at Old Togiak followed the village stays. In addition to soil sampling, that work included site mapping that used GPS to assign coordinates to such landmarks as former houses. (The traditional houses consisted of circular pits roofed over with logs and sod, and decades after abandonment, what’s left are depressions often concealed by tall coarse grass.) This past year, the group laid a grid for excavation and even started to dig, but was thwarted by rain.

“We tried to incorporate activities where they were also teaching us.”

As a matter of fact, though, Barnett hadn’t originally intended to excavate at all. But at the end of the 2017 visit, the village’s Traditional Council invited her to come back and excavate — an invitation that resulted in the current NSF grant.

The 2017 visit was pivotal in another way: Three local students took part in the Old Togiak fieldwork and, Barnett says, their contributions “changed everything.” Their knowledge of the site’s stories and history threw into sharp relief the cultural conflict that has shaped so many places like Togiak: the clash between native communities and colonial expansion.

The Togiak students knew which families had owned buildings still standing in the old village. Something that “looked like just a piece of aluminum roofing in tall grass used to be a fish drying rack that belonged to a specific family.”

And, Barnett says, “there were numerous stories about the building of the cannery — skulls and long bones just coming out of disturbed burial sites.” (Two of the three Togiak students are at Bates this week, attending A Model for Decolonizing Learning on College Campuses, an international conference organized by Barnett. An additional $50,000 NSF grant is supporting the conference.) 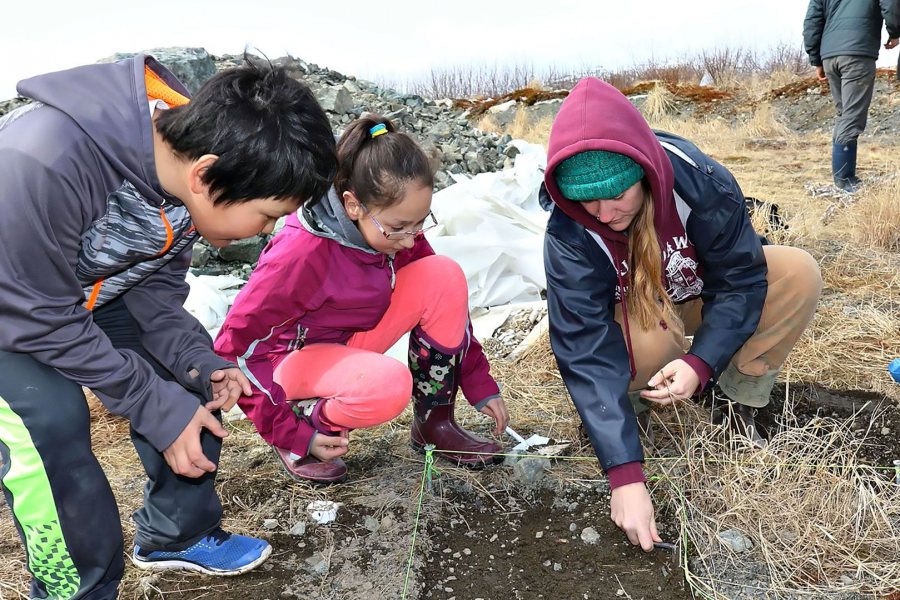 Bates and Togiak students learn the basics of excavation together during the 2018 experiential learning week. (Kristen Barnett/Bates College)

At the time of the 2001 Census, there were about 24,000 Yup’ik in the U.S., most of them in Alaska. (A different source adds that about 1,700 live in Russia.) Historically, Barnett explains, archaeologists have tended to think of the Yup’ik mostly in terms of who they are and how they live today — in a sense, severing them from their past.

But a site like Old Togiak bolsters the argument for taking the long view. As Barnett points out, radiocarbon dating has produced evidence of human activity taking place there as long as 3,000 years ago.

“Instead of going in with preconditioned ideas, we can actually look at the community in terms of a cultural landscape. We can think about the stories of elders — there are elders in the village who were raised over at the old village in pit houses — and think about the community a little bit differently,” she says.

Until recent years and the advent of indigenous archaeology, says Barnett’s student Carter Ros, “it’s just been archeologists going in, excavating someone else’s culture, and saying, ‘This is what happened and this is what went on here.’

“People like Kristen are starting to change that. It was refreshing to see how archeology could function, and do so much good, within a community.”

After all, Barnett says, “If we’re not integrating with community needs, we should probably rethink what we’re doing.” 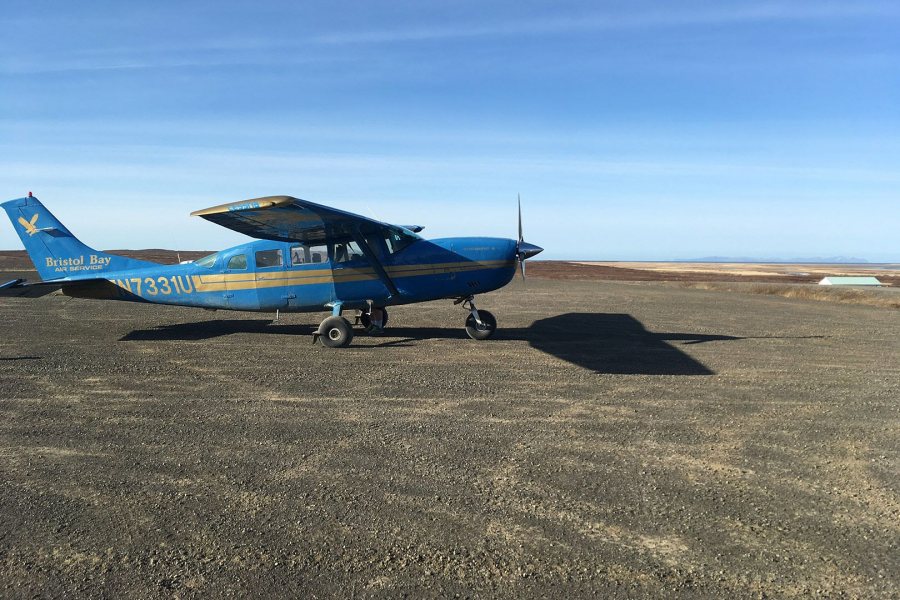 The Bristol Bay Air Service plane that brought the Bates group on the final leg to Togiak in 2017. (Kristen Barnett/Bates College)