The Plot, Chapter 1: Celebrating the harvest, contemplating next year

After a highly successful first growing season, you would think it’s now time for the Bates garden, and the gardeners, to take a rest.

But in the garden on a windy, chilly mid-October morning, two Bates students and a staff member are preparing for a new round of crops instead.

New plantings in Maine in October? You bet. Determined gardeners can extend the growing season well past summer with the right crops and the right infrastructure. 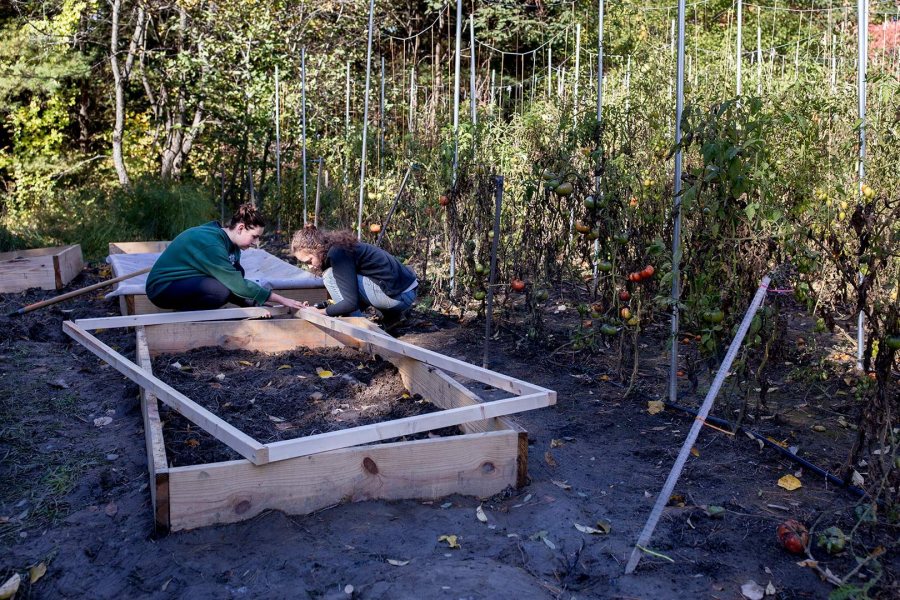 Against a background of tomatoes discouraged by frost, Olivia Kranefuss ’22 of Madison, N.J., and Katharine Gaillard ’19 of Boston assemble a cold-frame cover at the Plot. (Phyllis Graber Jensen/Bates College)

And so on this morning eight trays of cold-hardy seedlings — carrots, leeks, arugula, spinach, beets, chard, kale — sit near the Bates trio in a patch of sun.

In a patch of shade, the three are tackling the infrastructure: five big heavy wooden cold frames. Sustainability Manager Tom Twist is building covers for the frames from wood and heavy translucent fabric.

Meanwhile, aiming to settle the frames into the soil by a few inches, Katharine Gaillard ’19 of Boston and Olivia Kranefuss ’22 of Madison, N.J., are carving out frame-shaped trenches with long-handled spades. The soil in the garden, aka the Plot, is heavy and gummy with marine clay, and the digging is slow.

Gaillard is making a bit more headway than Kranefuss. But she’s had a lot more practice than her first-year colleague. Gaillard and Josie Gillett ’19 of Seattle spent the summer at Bates as paid Plot interns — raising from that clay-heavy soil nearly a ton of produce that they delivered to Commons for campus consumption.

*Juliet, a grape tomato, was the most productive variety by weight, at 170.4 pounds.

The pair, in short, got the Plot off to a resounding start.

“It was an excellent partnership,” says Christine Schwartz, an early champion of the project and Bates’ assistant vice president for dining, conferences, and campus events. “It was the dedication on the part of the students that made it so successful.”

The Plot’s first summer was a win for all concerned. Gaillard and Gillet gained valuable experience growing vegetables to customer specifications. Commons got fresh, Bates-grown produce to offer customers at the vegan station and salad bar. And diners were pleased to chow down on the tomatoes, cucumbers, kale, and other crops.

“The produce was phenomenal,” says Schwartz. (Some campus customers even got free vegetables to enjoy at home when the Plot supply outstripped Commons’ appetite in August.) 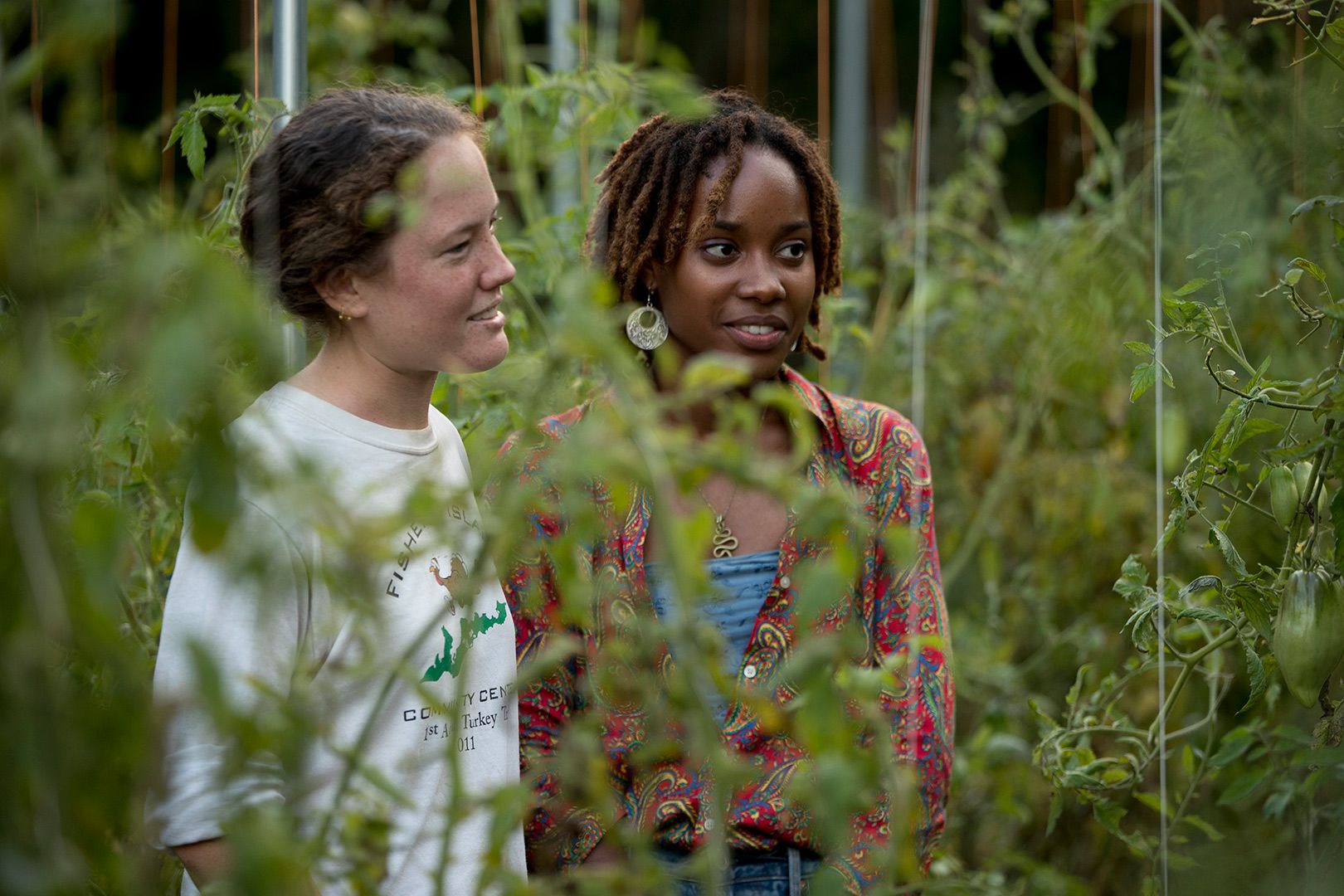 Leading the Bates garden effort during the 2018-19 academic year, senior EcoReps Katharine Gaillard of Boston and Isa Moise of Mount Vernon, N.Y., look on during an Oct. 9 party at the Plot. (Phyllis Graber Jensen/Bates College)

If a recent light frost, failing daylight, and a summer of production left the Plot looking dilapidated by mid-October, in its heyday the college garden was a stunner — long happy rows of summer squash, cucumbers, and kale, and 180 tomato vines reaching for the sky on tall trellises. (Onions were the only crop that didn’t thrive.)

Isa Moise ’19 of Mount Vernon, N.Y., heard about the Plot all summer — she was doing research for the project while she worked a summer job (aquaponic farming, in fact) — but didn’t get to work in the Bates garden until start of school in September.

“I was amazed at how big it was,” says Moise, who has a job as operations manager at the Brooklyn aquaponic operation Oko Farms waiting for her after graduation. “I had only heard the figures over the phone or over Facetime, but when I got there and could see the Plot — ‘Wow, this place is huge, and it’s producing so much.’

“Then, to see the greens and the tomatoes that we grew on people’s plates in Commons, that was just super cool.” Moise is co-leading the Plot with Gaillard this academic year (both are EcoReps, members of a student program undertaking campus sustainability projects). 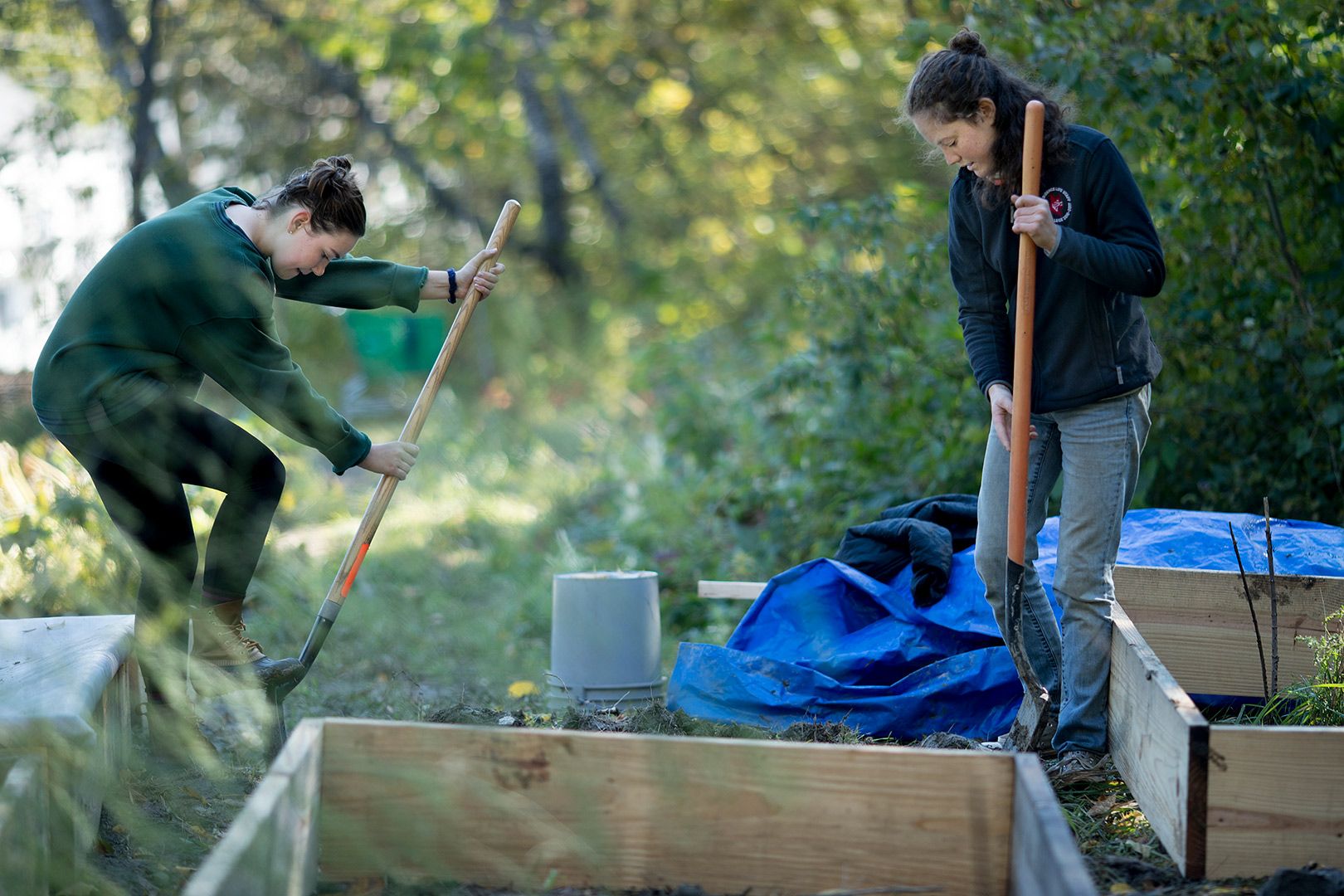 Aside from tending the new plantings in the cold frames, what remains to be done in the Plot after 2018’s productive summer is cleanup: removing dead plants and apparatus like the tomato trellises, and mulching the beds with dead leaves that Facility Services will supply. Those chores will be done during Bates’ Nov. 4 EcoService Day.

As growers do, Moise and Gaillard are increasingly focusing on next year. One objective is to design a garden schedule, in light of this year’s experience, for their successors. Crop rotation, that tried-and-true means of keeping soil healthy with a minimum of fertilizer and other inputs, is part of the plan.

“We’re trying to lay out a framework to follow so that people know, ‘You’ll grow this this year and you’ll grow that next year, and this is why,’” Moise explains. “You have to replenish the soil.”

If Commons and its customers were pleased by the Black Cherry tomatoes and the Red Russian kale that poured out of the garden in July and August, the ultimate point of the Plot is teaching students. That entails all manner of practical skills (and not just wrangling clay soil), but a few deeper lessons have taken root in there, too. 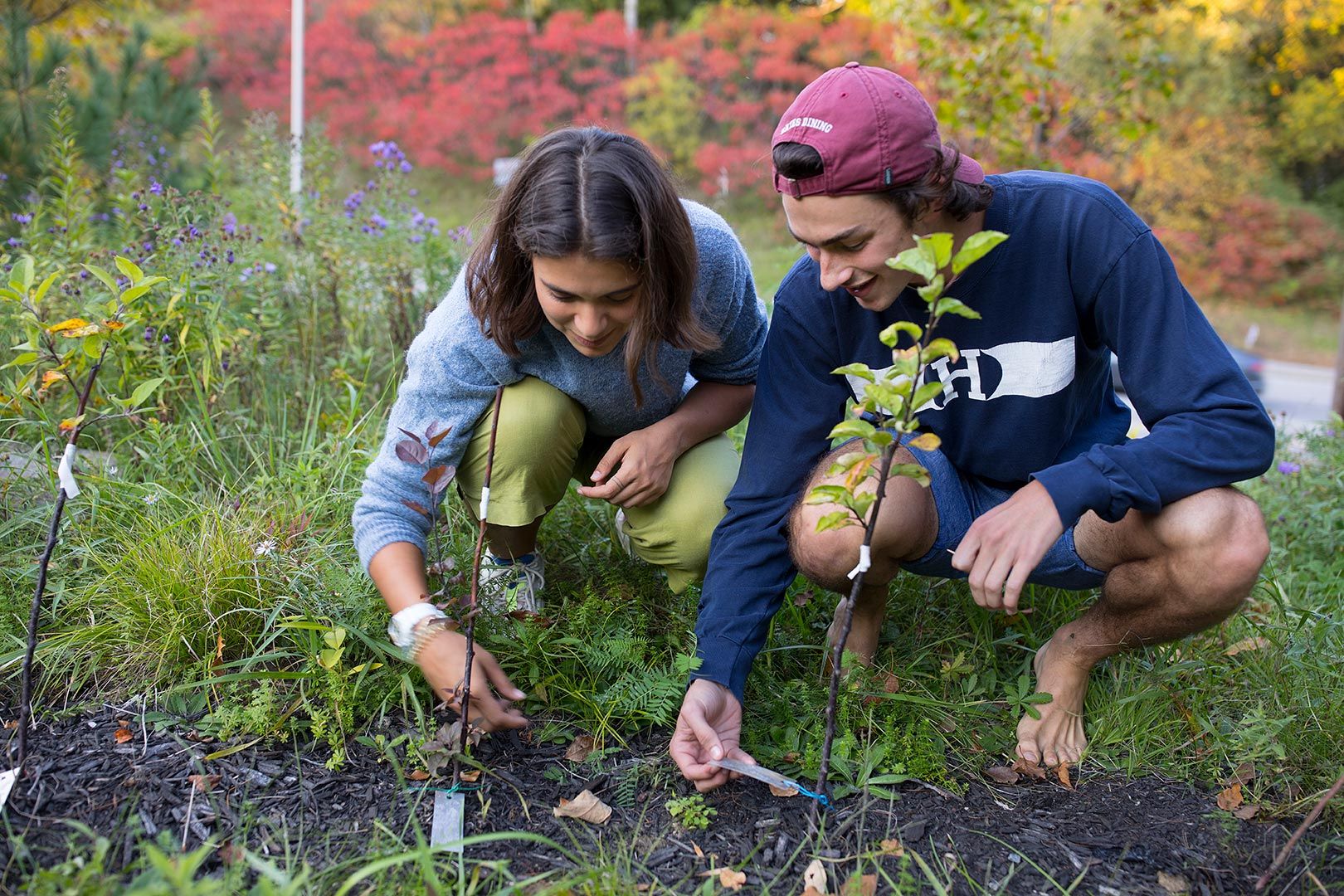 Anna Maheu ’21 of New York City and Elliot Wilson ’21 of Lakeville, Conn., inspect one of the Macoun apple trees that they grafted at the Plot last spring. The pair were among students attending a party at the Plot on Oct. 9. (Phyllis Graber Jensen/Bates College)

“Even though a lot of meetings and planning happened before we did anything major,” says Gillett, “Katharine and I had to do a lot of thinking on our feet to get things done well and efficiently. It was really cool to balance big-picture planning with on-the-ground decision making.”

“Farming is all about learning from your mistakes and being humbled by the environment,” Moise adds. “You could lose a bunch of your tomato crops and you could get mad — or you could be like, ‘Okay, what are we going to do now to fix this problem?’”

Rolling with circumstances is key, Gaillard agrees. And that encompasses the pleasures as well as the problems, a perspective that is valuable not only in the pressurized world of academics, but in the workaday world as well. 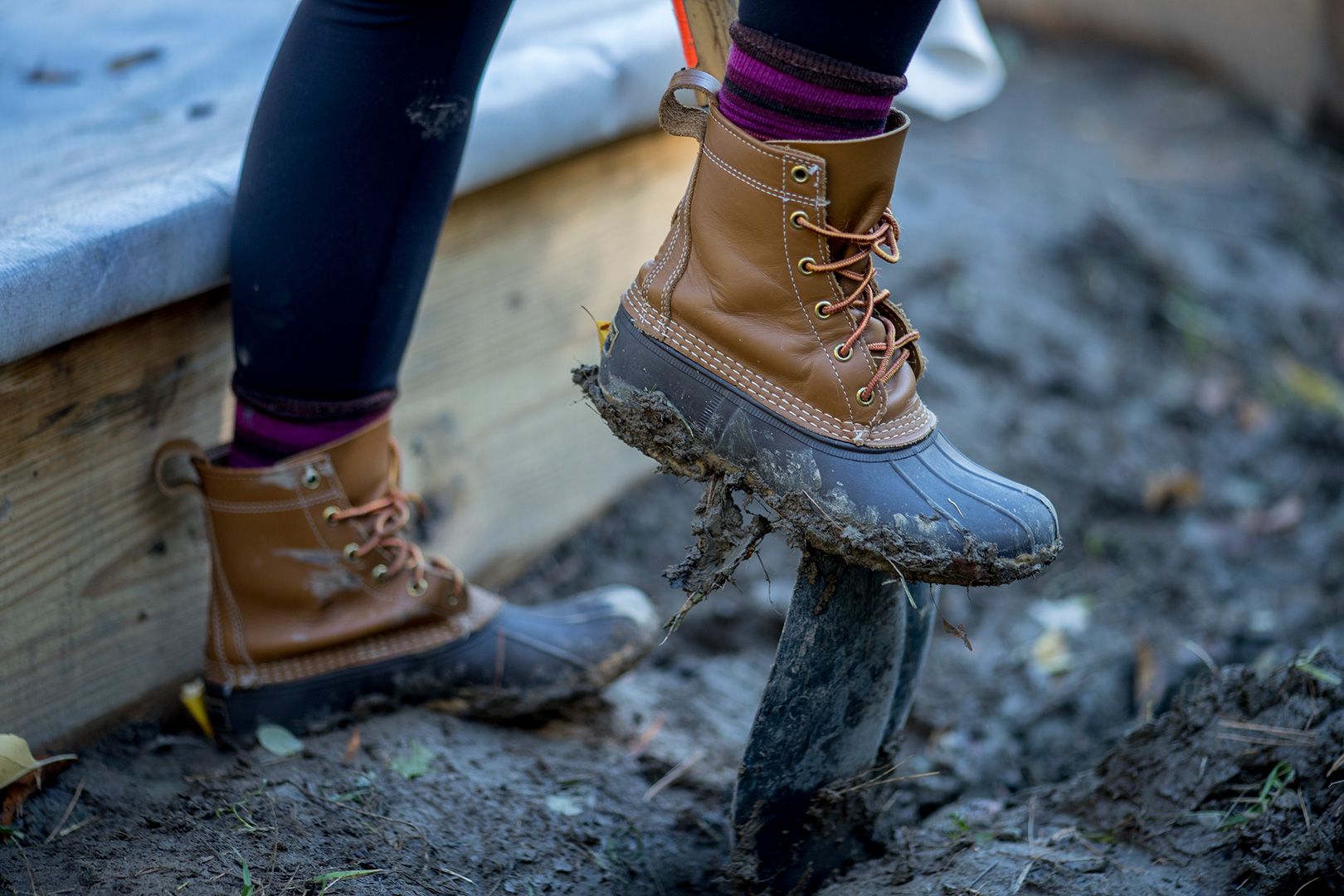 “But the garden work is very much not that way.” Some days during the summer, she’d find herself eyeing her watch as she hustled through the weeding and picking. “But then I’d always find myself going, ‘Katharine, you’re enjoying this. This doesn’t have to be rushed.’

“That balance is a nice one to have.” That’s a reason, she says, “why I’m excited to get more students involved, and just have it be more of a part of campus.”

Backed by Commons, the EcoReps, and sustainability manager Tom Twist, Moise and Gaillard are working a number of levers to enlarge the cadre of dedicated Plotters, which now stands at 10 or so. 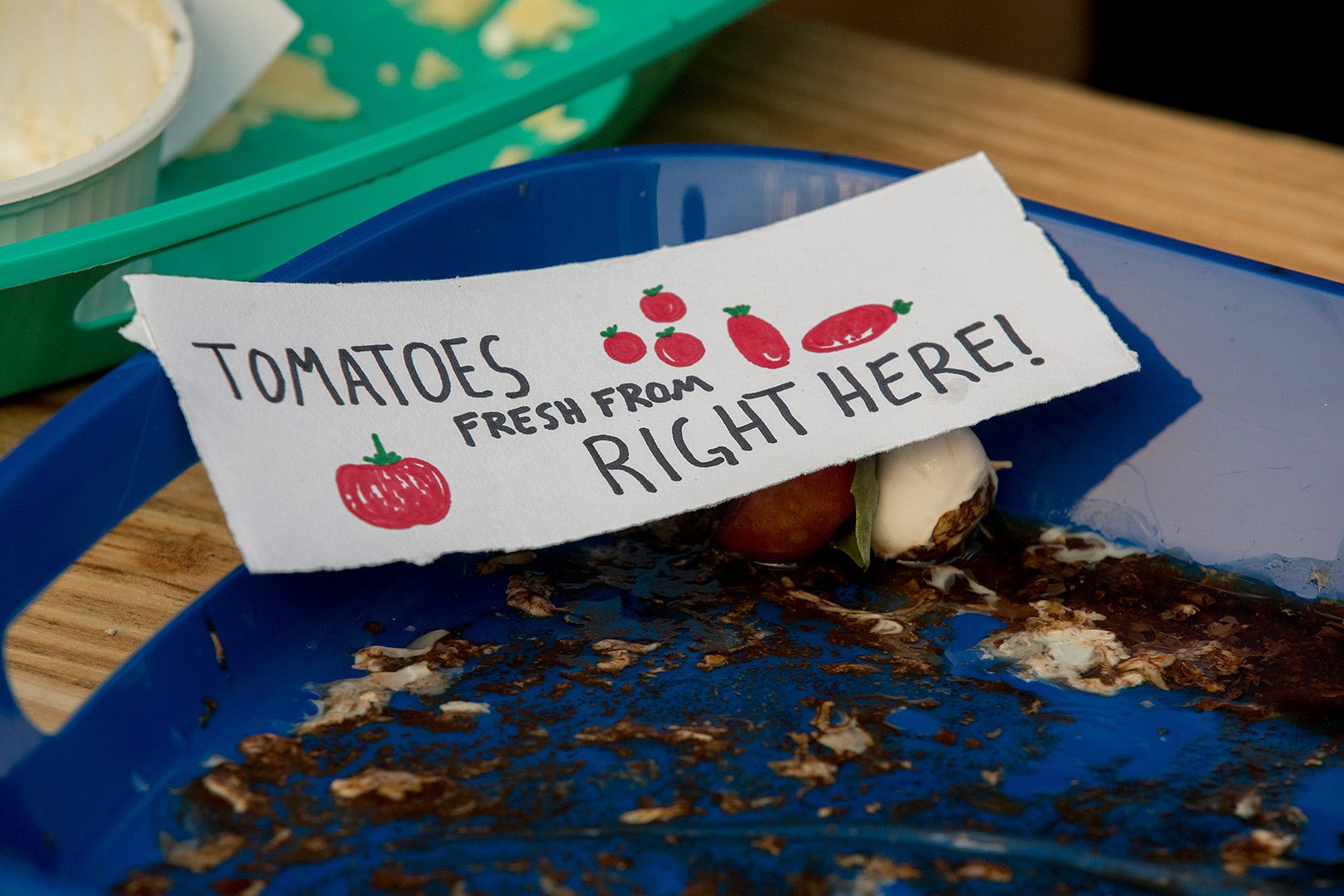 Fresh tomatoes grown on site baked with fresh mozzarella made a popular treat at a Plot party on Oct. 9. (Phyllis Graber Jensen/Bates College)

“That’s definitely the ongoing challenge,” Gaillard says. “If the dream is to be this space that students can go to and feel they’re a part of, and feel they have input in and connection to, how do we start that? We’ve tried a bunch of things.”

“We’re trying to enlist different clubs,” Gaillard adds, pointing to the Cold Front ultimate club and Bates Builds as participants this year. “We’re trying to be like, ‘We have common ground in this area.’”

Regularly scheduled open garden hours make it easy to drop in and work for a couple of hours. The Bates Garden Club builds enthusiasm for the Plot through publicity and presentations on garden-related topics. On Oct. 9, the EcoReps event committee hosted a well-attended Garden Party.

“That was awesome,” Gaillard says. And while they’re not complacent about attracting new recruits to the cause, she and Moise are nevertheless pleased by the excitement they’re seeing among fellow students.

“There are people that come to open hours each week, or every time we host something, they show up,” Gaillard says. “I hear people telling their friends about it.” 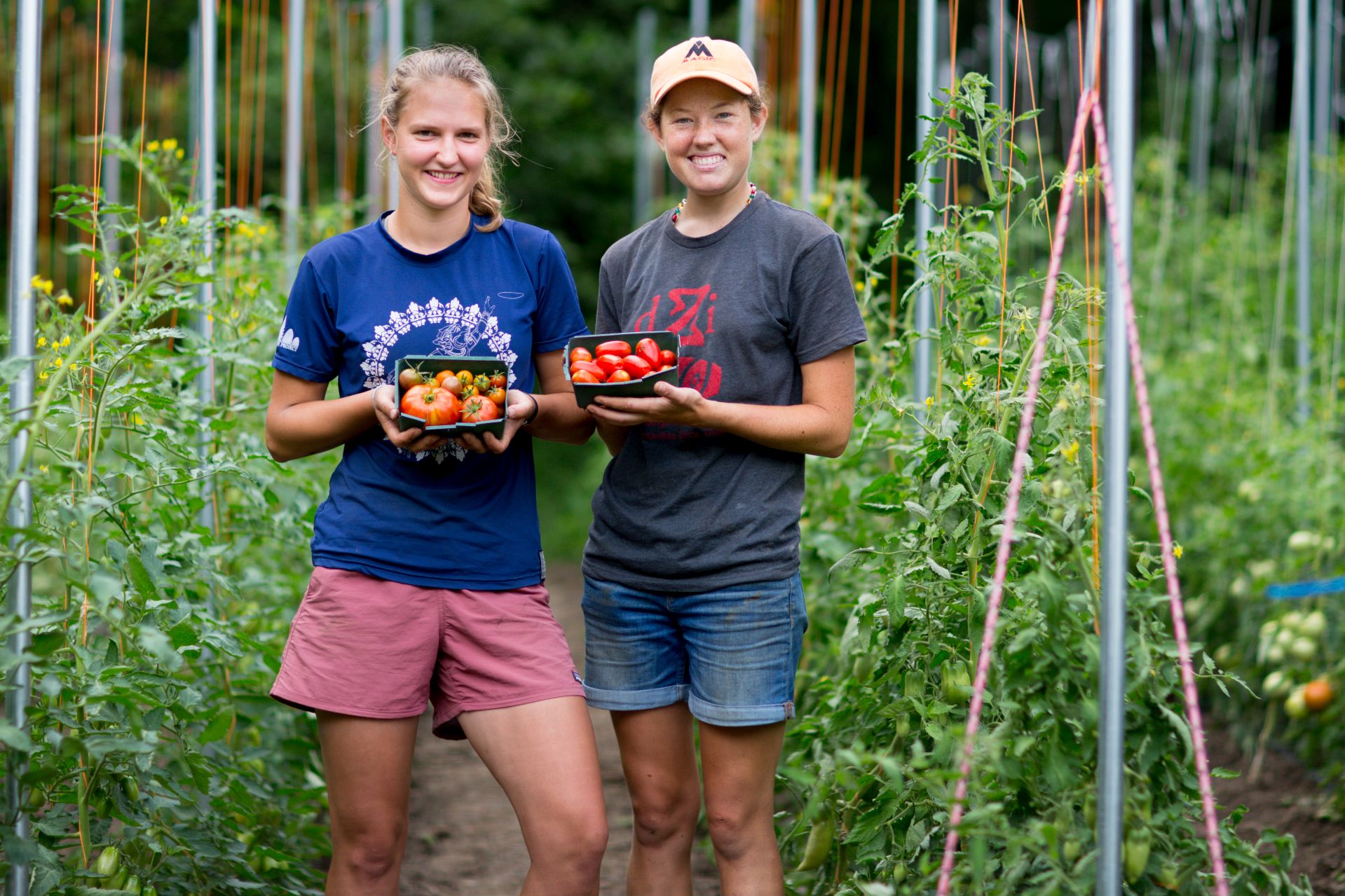