That was then: On Oct. 25, a week before the deadline for their completion, the hardscaping projects at Coram and Ladd libraries were the focus of intense activity.

“This is crunch time,” said Paul Farnsworth, Facility Services project manager for the projects in front and in back of Coram Library: the expansion of Coram Terrace and the revamping of Ladd Plaza. “We have all the materials, finally, and we have all the people. Now the weather is the challenge.” Nearly three inches of rain fell on Lewiston in October.

Among those feeling the crunch were workers for project contractor Contracting Specialists Inc. They’d been putting in 10-hour days, and floodlights by the terrace enabled them to see their work when they got there each day at 6, an hour before sunrise. 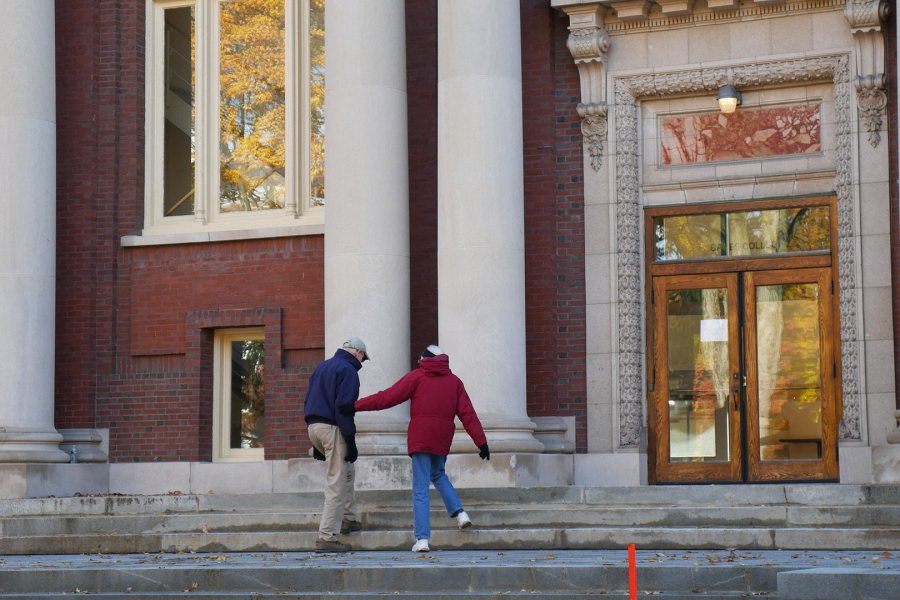 Some of the masons were placing the big granite pavers, 18 by 36 inches each, on the Coram Terrace floor. Curing blankets were heaped around, ready to spread over fresh-laid granite to keep the mortar from freezing. Other workers nearby fitted precast stone facing onto walls adjacent to the new stairs that connect Ladd Terrace to the Historic Quad.

A Lull forklift brought materials to that team from a stockpile near the Gray Athletic Building. Meanwhile, little front-end loaders — yep, Bobcats — scooted around and a junior excavator stood by to lift granite and move soil. Electricians ran cables from Coram out to in-ground receptacles for video and sound equipment.

Farnsworth himself was a bit crunched. Originally scheduled for substantial completion by the start of school, the library projects were slowed by supply delays.

In particular, the granite for Coram Terrace came late. “The marketplace for granite is really busy,” said Farnsworth. 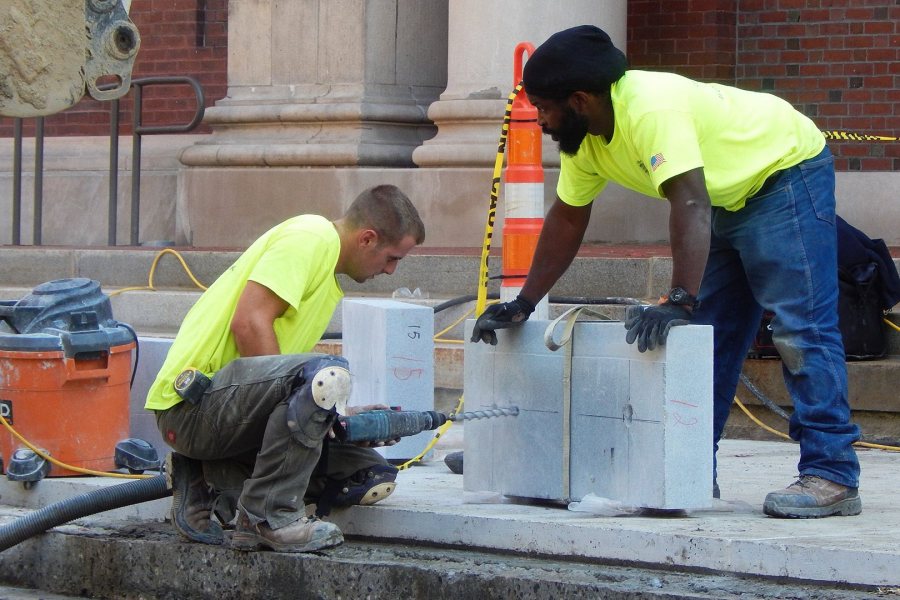 Drilling granite for a fastener at Coram Terrace on Oct. 10, 2018. (Doug Hubley/Bates College)

He also explained that the process for precision-cutting stone can slow things down a bit. The contractor, who is on the work site and can assess how things actually need to fit together, submits so-called shop drawings with measurements to the architect for approval. And it’s those approved drawings that the stonecutters work from.

You’ll recall that the terrace, which faces the Historic Quad, has been expanded to make it a better stage for academic ceremonies like Convocation. In the absence of the granite, Convocation this year took place on the terrace’s new concrete slab, bare but dressed up with flowers.

The granite showed up around the beginning of October. The CSI crew began by placing blocks around the slab perimeter to form a low parapet. Next came the steps, a particularly fussy fitting job, and then applying fascia blocks around the vertical face of the slab, which required excavating around it.

Finally, onto a bed of mortar, the team laid and grouted the pavers over which the graduates of 2019 and beyond will stride to receive their diplomas, and across which we’ll all walk on the unceremonial days of the year, not giving CSI and their hard work a thought. 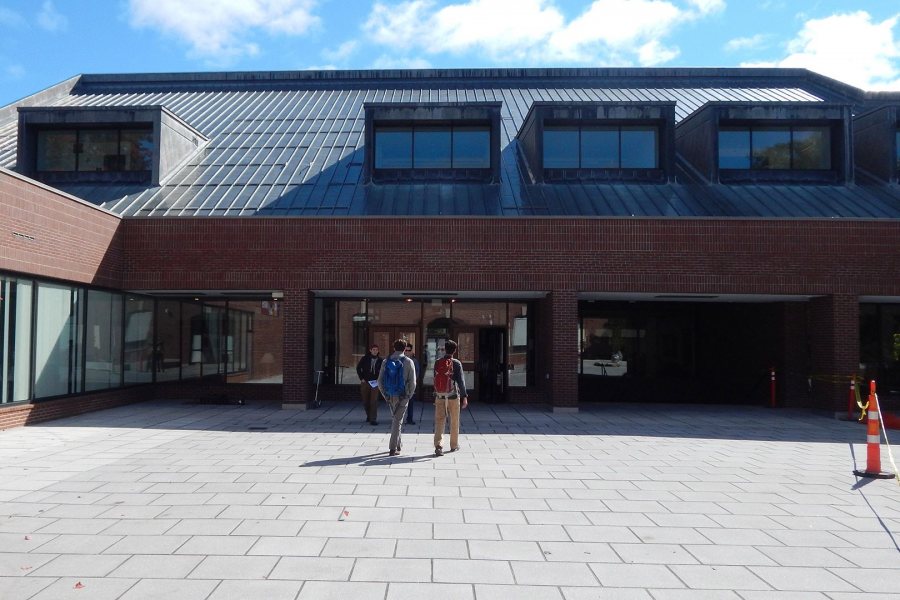 Up on Ladd Plaza, the pace was more relaxed. This was a sharp contrast to the summer and early fall, when the plaza was off-limits as it was torn up, a leaky subterranean water barrier replaced, and the whole works rebuilt to a higher technical and aesthetic standard.

With temporary signs pointing the way during the construction, visitors could access the library only through a ground-level service door facing Hedge Hall.

But the plaza and the library’s main entrance were reopened on Oct. 1, and by the 25th workers were concentrating on just a few tasks, mostly related to the aesthetics of this site intended to be an al fresco living room.

And this is now: On Oct. 31, hours before deadline, the Ladd Plaza renovation and the Coram Terrace expansion were more or less complete. 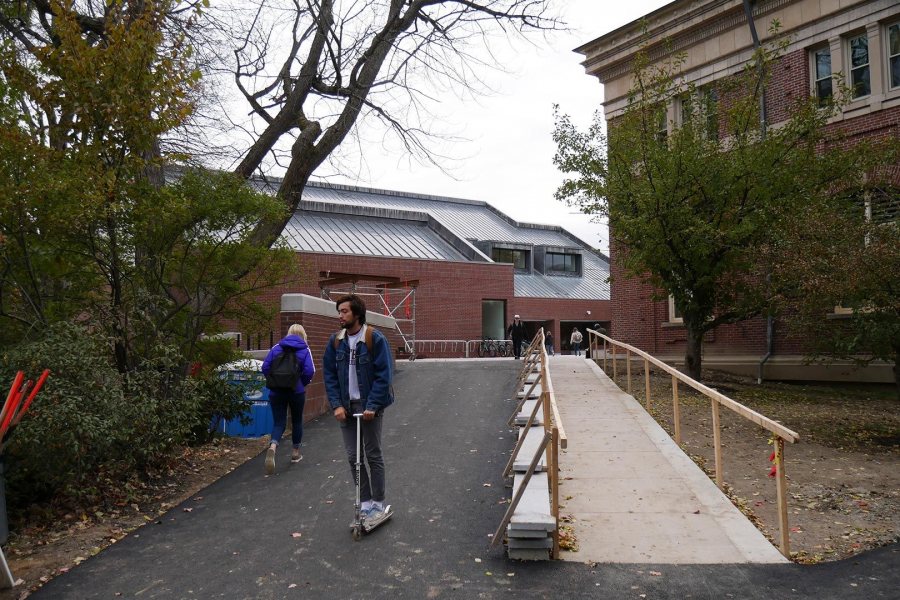 A scooter commuter enjoys the fresh asphalt on the two-lane connector between Ladd Plaza and the Historic Quad. (Doug Hubley/Bates College)

Along with punch lists, some strewing of soil and grass seed, and other chores of the tidying-up variety, the work yet unfinished involves the pedestrian connections between the plaza and the Historic Quad.

The northern route, at the Hedge end of Coram, is in service but awaits metal railings on its ADA-accessible ramp. Those will show up just before Thanksgiving.

Parallel to that concrete ramp, a second walkway was paved on Tuesday as part of a wide-ranging asphalt-a-thon by local firm Cooper Paving, and was opened soon thereafter.

Still closed is the southern access to Ladd, near Carnegie Science, while the placement of precast stone facing continues. That job will be done by the end of next week. 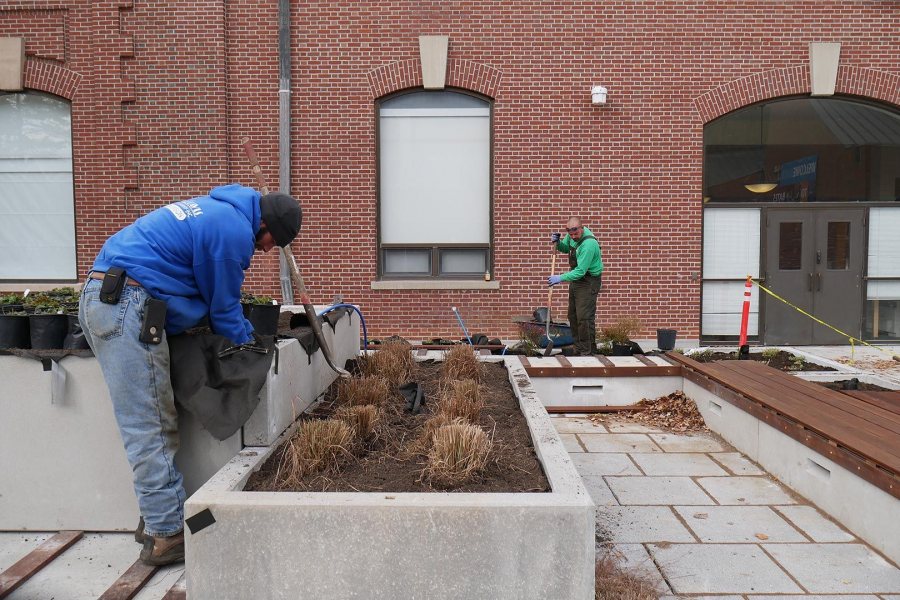 Landscapers fill the planters in a cluster of concrete furniture on Ladd Plaza. The plantings include a decorative onion that was a 2018 Perennial Plant of the Year. (Doug Hubley/Bates College)

Up on the plaza on Halloween afternoon, workers for Davis Landscape Co. of Lisbon, Maine, were planting plants in planters. These fixtures are combined with seating to form a cluster of concrete “furniture” that cleverly conceals the top of a Ladd Library elevator shaft.

In this case, it’s a butterfly-friendly variety called Allium Millenium (yep, one “n”), named the 2018 Perennial of the Year by the Perennial Plant Association, which prioritizes other horticultural virtues over correct spelling, and rightly so.

The other major outstanding task was also at the cluster. Carpenters were nearly done covering the square concrete benches with wood that makes them more inviting visually and, er, posteriorly. The other benches scattered around the plaza, seven of them, had been ready for a couple of days. 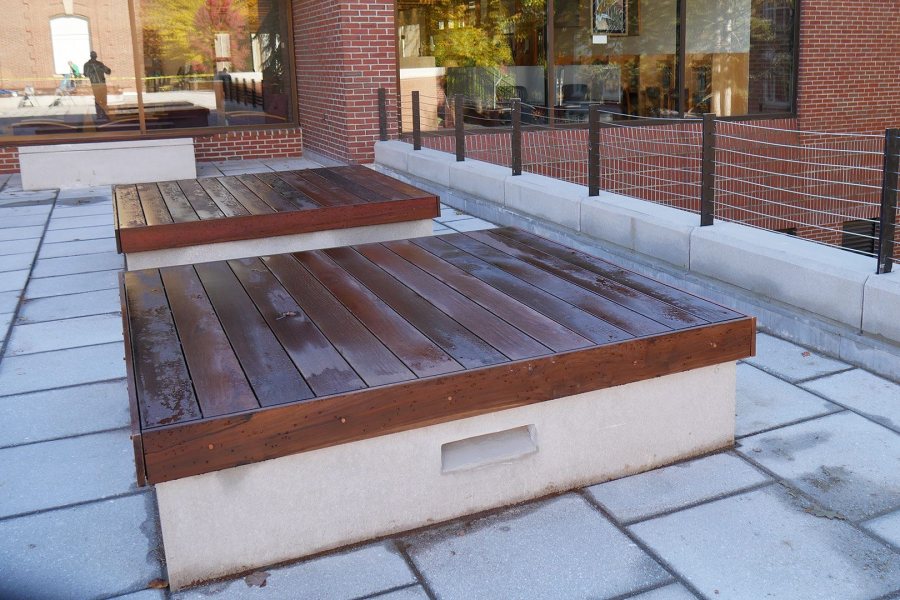 The wood on the benches is a new one to us: ipe. Rhyming with “eBay,” this chocolate-brown, too-heavy-to-float Brazilian hardwood is something of a double-edged sword as a building material.

Not only is it good-looking, but it’s extremely durable and will survive years of Maine weather. But that durability also makes it tough and difficult to work, to the extent that it tends to quickly dull cutting tools used on it.

(Moreover, the Google says that ipe smells like vanilla or cinnamon when it’s cut. This was not our experience. It’s true that we could have devoted more time to the effort, but persons smelling sawdust at a work site tend to attract unwelcome attention.)

A look around the plaza revealed not just ipe-covered benches but the handsome barriers that, completed just within the last few days, fill selected gaps in the brick parapet wall. The barriers consist of black metal uprights with stainless steel cables strung through them, and ipe handrails on top. 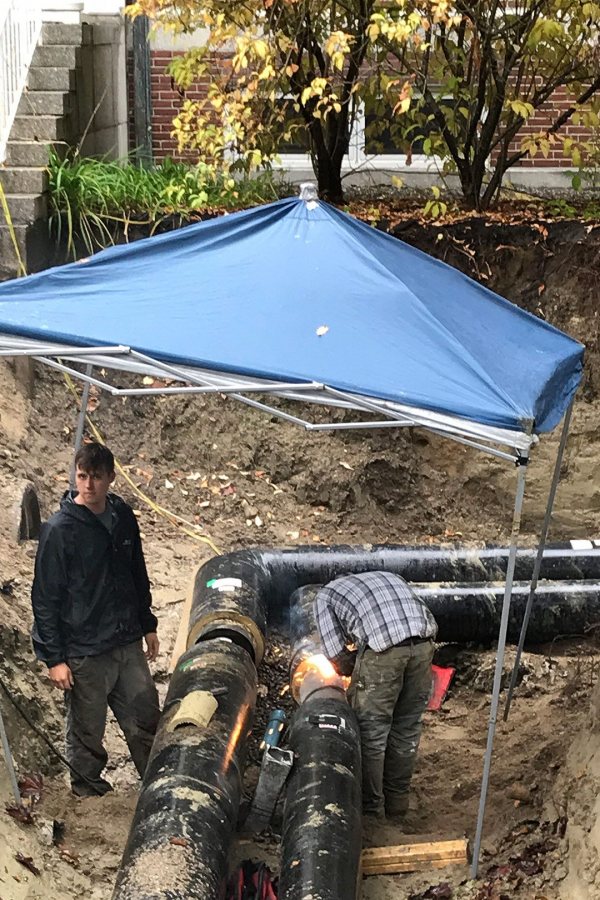 Welding a joint on steam pipes in front of Wentworth Adams Hall in the rain on Oct. 11, 2018. (Doug Hubley/Bates College)

Sightlines helped determine where those fencelike intervals would go. In keeping with a larger trend in Bates architecture, dating back at least to the building of Pettengill Hall, the plaza renovation has been designed to maximize views into and out of the site.

Aside from the bustle around the cluster, though, there was nothing much to see besides the students using the library. We went into Coram and exited onto the terrace, trying out the new granite. A couple of masons had just grouted the last three pavers and were packing up.

Cooper Paving, too, had knocked off for the day, leaving a power roller and an asphalt spreader parked by the Class of 1906 Gate. The yellow tape marking the construction zone around Coram was gone. We headed back to the office.

It’s all over but the paving: The steam-line replacement at North Bardwell Street was functionally completed, as predicted, in mid-October.

You’ll recall that the project was stalled for a while by a change in the pipeline routing and the consequent need to fabricate new pipes. Those arrived during the first week of October, were connected and tested the following week by ATA Piping, and were buried the week after that, said Alan Kelley, project manager.

All that’s left to do is to put a top coat of asphalt on the roadway (don’t get us started again on top coats) and stripe it. All that should happen next week.

Can we talk? Campus Construction Update welcomes your questions and comments about campus improvements. Please e-mail news writer Doug Hubley, stating “Construction Update” or “Is that a trick question?” in the subject line. 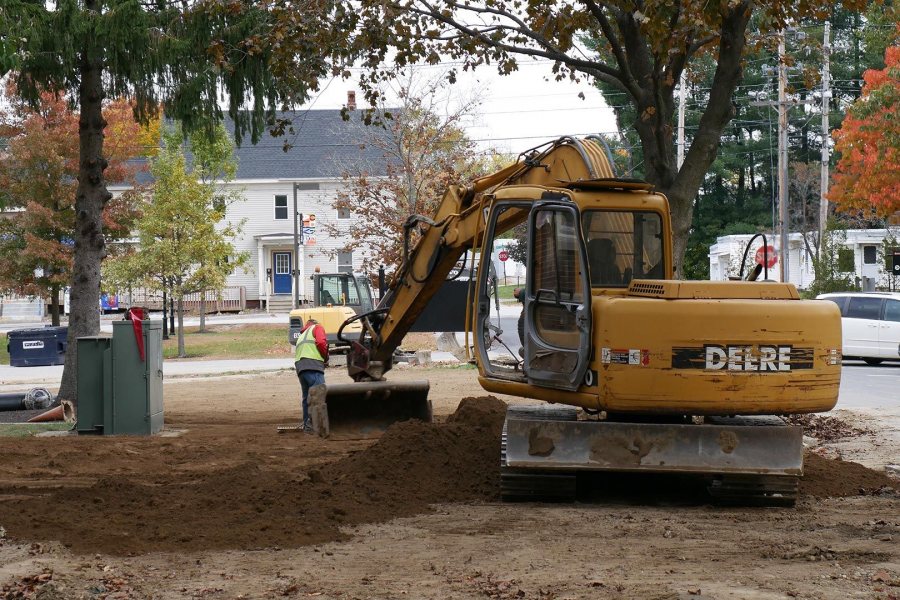