If you’re one of the many career-forward young people curious about the lucrative and fast-paced field of campus construction reporting, Bates would have made an ideal training ground for you this summer. (Too bad Campus Construction Update got here first!)

That’s because there’s so much happening on the facility-improvements schedule — and it covers a fascinating diversity of construction projects that would teach you plenty about how buildings work, if you got to report on them, which you won’t. 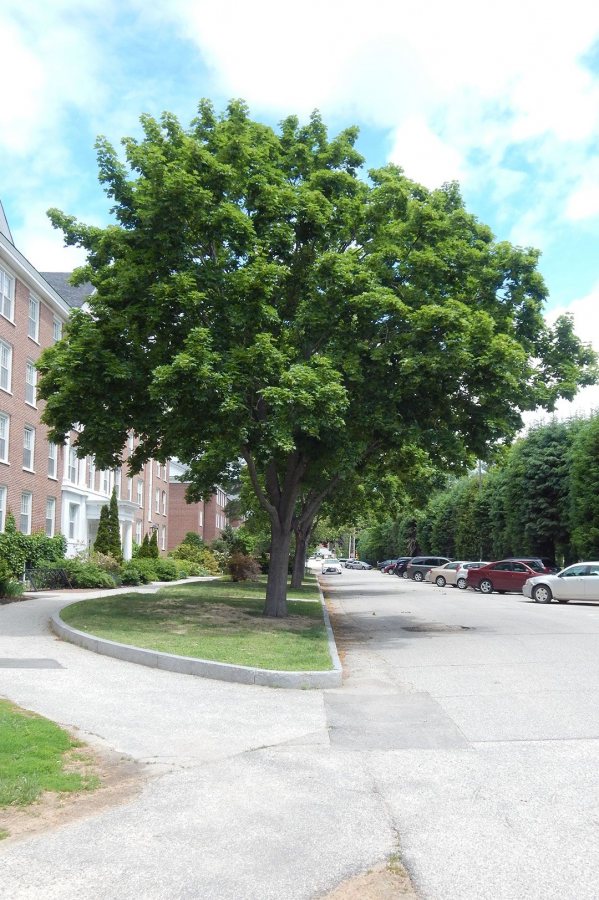 North Bardwell Street will undergo surgery starting June 11. The evergreens down the right-hand side will come down to give breathing room to an adjacent row of deciduous trees. (Doug Hubley/Bates College)

From Bates’ northern boundary on Russell Street to its southern counterpart on Campus Avenue, seven projects have come under CCU’s scrutiny.

We’ve already introduced you to the Alumni Gym revamp that will leave the basketball court with shiny new bleachers and floor by mid-June; and to the Ladd Library renovation that will give new offices to the Accessible Education and Student Services operation soon thereafter.

But another project at Ladd, along with Coram Library, promises to be much more conspicuous than the AESS work. Starting June 11, it’s a long-awaited two-part adventure in hardscaping: the enlargement of Coram’s porch to better accommodate public events such as Commencement, and waterproofing work that will culminate in a complete makeover of the sunny plaza between the two libraries.

Nearby, Carnegie Science Hall is the site of two separate undertakings. One is the installation of a more efficient hot-water system. And the other, which will put a crane on the Historic Quad for weeks, will replace aging components in the building’s massive rooftop HVAC plant.

Also starting June 11, a major utilities job will keep most of North Bardwell Street, site of Smith and Adams halls, closed for the summer. Steam, water, and sewerage pipes will be replaced or repaired.

Finally, one more project that’s now underway is near and dear to our hearts: the creation of new quarters for the Bates Communications Office, which will move to Lane Hall next fall.

Yep, you heard it here first: Bates Communications Plaza on Nichols Street, including the cozy CCU penthouse and our much-frequented meditation garden, will make way for progress in the form of a new Bates science building slated to open in 2021. But more about those developments in future installments.

For now, here are updates and overviews of the other projects: 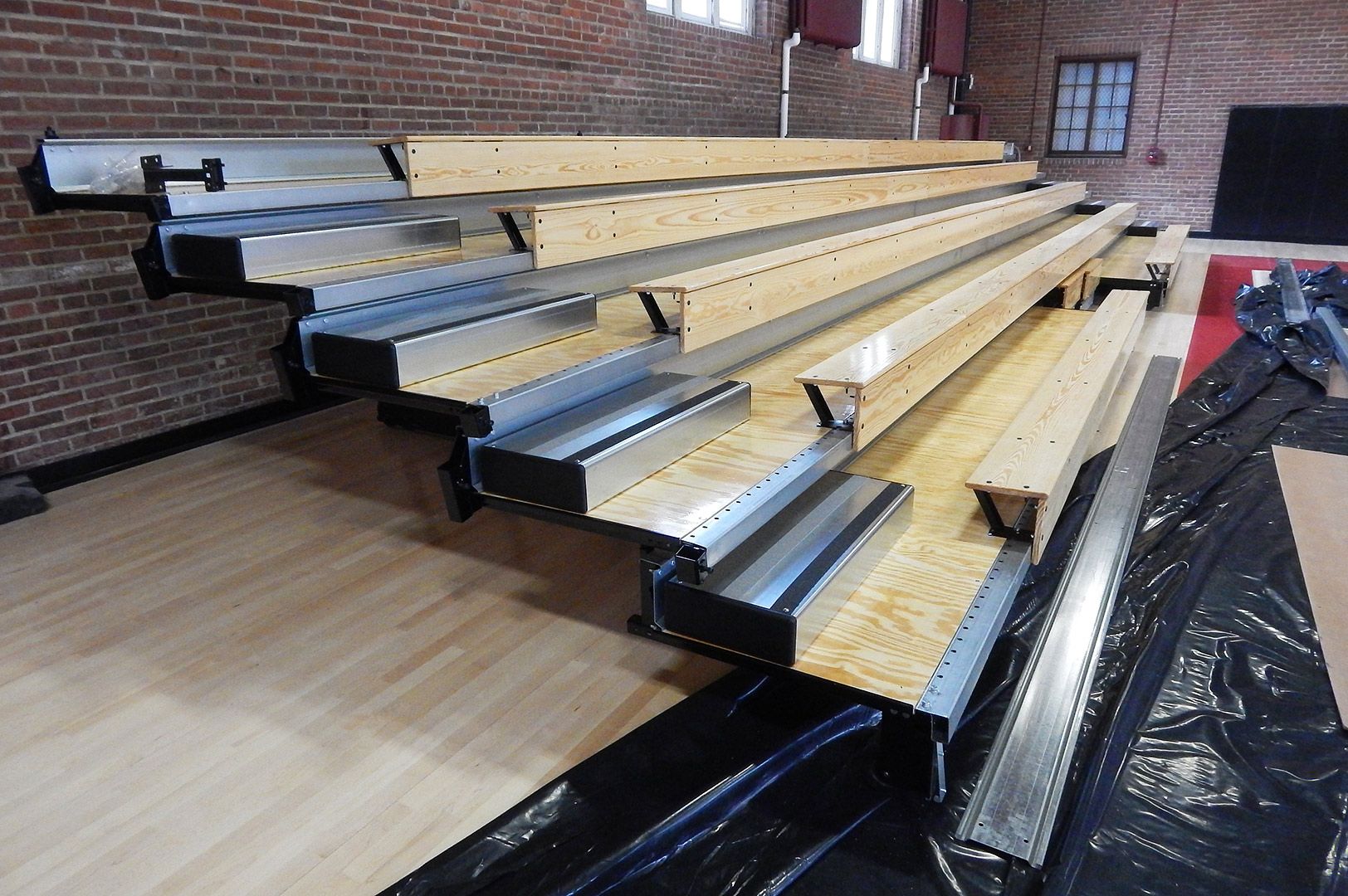 Progress on the new Alumni Gym bleachers as of June 6, 2018. (Doug Hubley/Bates College)

Alumni Gym: Components for Alumni Gym’s new bleachers arrived on May 30 — hard pine for the seats and floorboards, a lot of large metal parts for the supporting structure, and many, many, many boxes of hardware.

The bleachers are being erected by J.M. Libbey and Sons of Sanford, Maine, a subcontractor to Robert H. Lord Co. of Manchester, Conn. Hussey Seating Co. of North Berwick, Maine, manufactured the units. When we visited on June 6, with a week or so to go, three workers were on the job and the work, to our inexpert eye, looked about half-done.

The first lucky hoopsters to enjoy the spiffy rejuvenated basketball court will be participants in a summer camp hosted by the Bates basketball team June 25–28. Returning from a year of playing pro ball in Europe, twin Bobcat standouts Marcus Delpeche ’17 and Malcolm Delpeche ’17 will co-direct the camp. 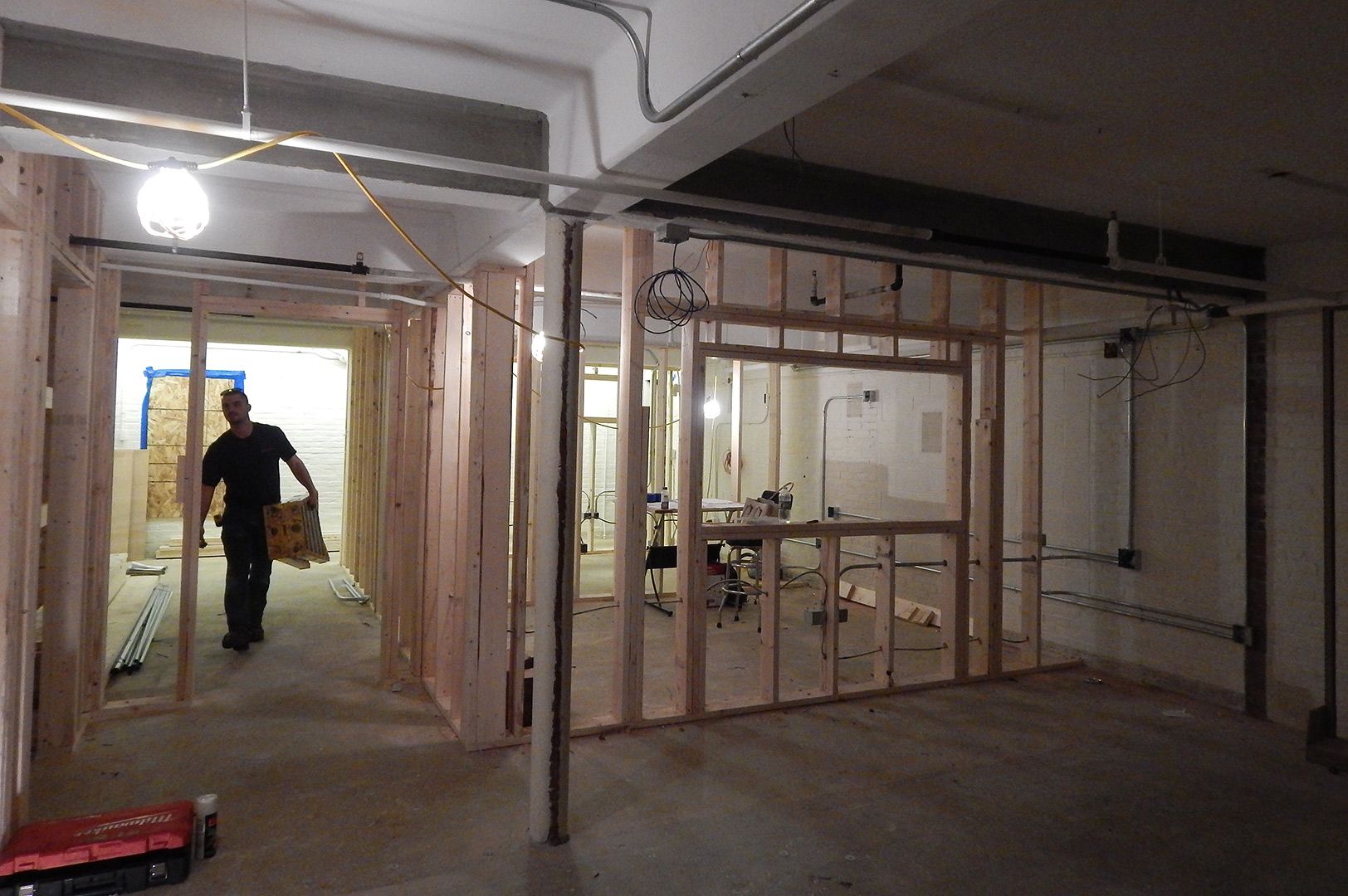 A Weatherize Northeast employee installing sprinklers in the Accessible Education office heads to his next location on May 3, 2018. (Doug Hubley/Bates College)

Accessible Education: Workers for the local firm Weatherize Northeast started installing wallboard in the new AESS offices, in the former periodicals area on Ladd Library’s ground floor, on May 20. That job was done within the week, and painting continued into early June.

The dominant paint color is Dover white, a standard at Bates. But a cornflower-blue accent wall, adorned with graphics by Bates Communications designers, will greet visitors to AESS. Carpeting, utilities finish work, and furniture are still to come, with the last scheduled for June 18. 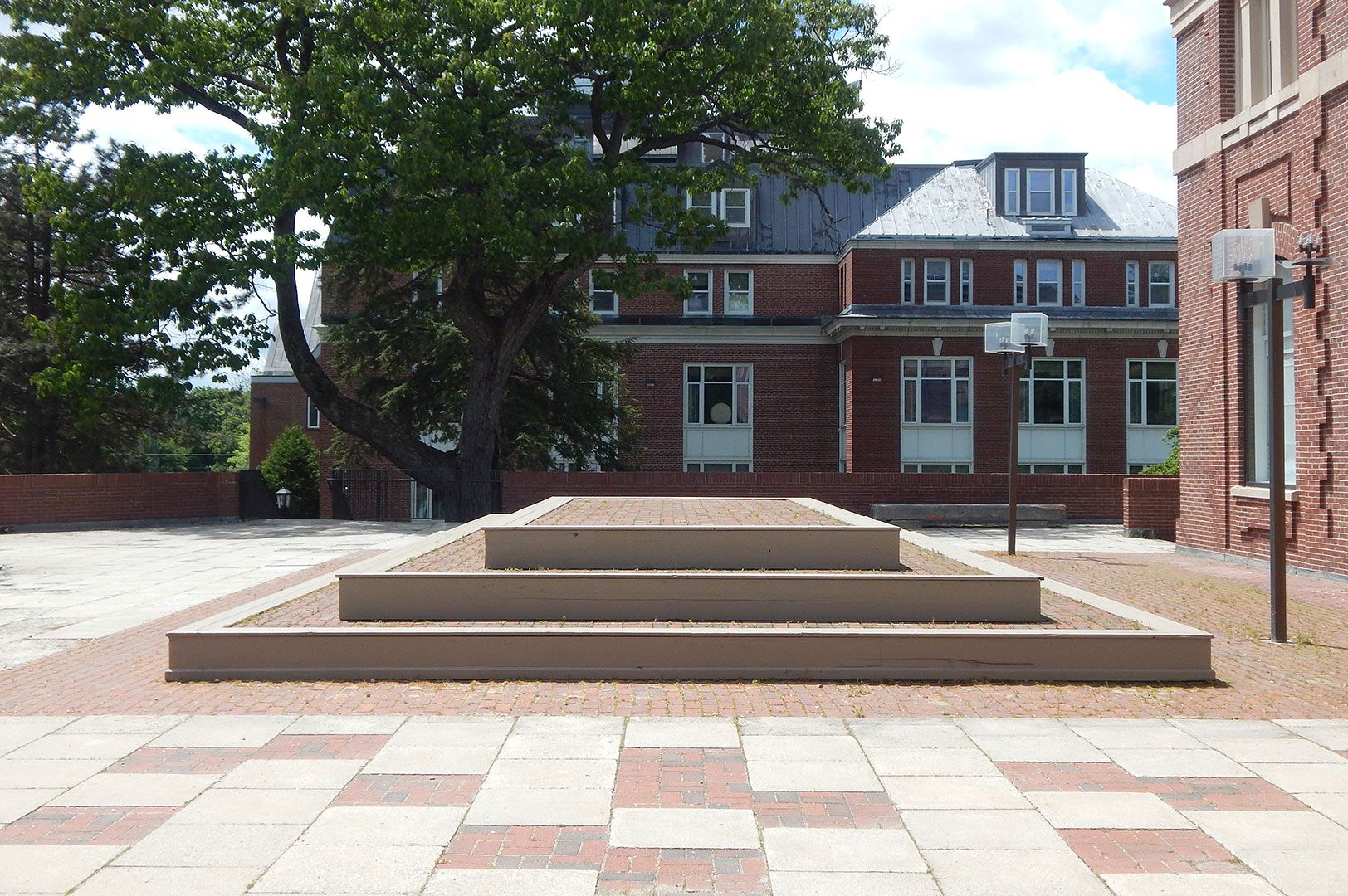 This three-tiered dais, which covers the top of a Ladd Library elevator system, will be reconfigured in this summer’s makeover of the plaza between Ladd and Coram libraries. (Doug Hubley/Bates College)

Ladd and Coram hardscaping: If the visuals for Nelson and Dockum will be a pleasure, the soundtrack in their new digs may be a different story. By the time they’ve moved in, Contracting Specialists, Inc., of Attleboro, Mass., will be digging up the plaza that connects Ladd and Coram libraries, more or less over the heads of the AESS staff.

“It’s all being driven by keeping the library dry,” says project manager Paul Farnsworth. Somewhere amidst the layers of building materials beneath the plaza is a rubber membrane that was waterproof when it was installed, 45 years ago, but isn’t any longer. In short, it leaks and lets water into the library.

Clearing away layers of pavement, sand, insulation, and other materials, Contracting Specialists will expose the old water barrier, replace it with a hot-applied rubberized asphalt system, and rebuild the plaza to a new design that will make this popular hangout spot even more inviting.

New features will include furnishings, made of rugged ipe wood, that combine planters and seating; entries to the plaza that will include an ADA-compliant access; and stylish cable railings. 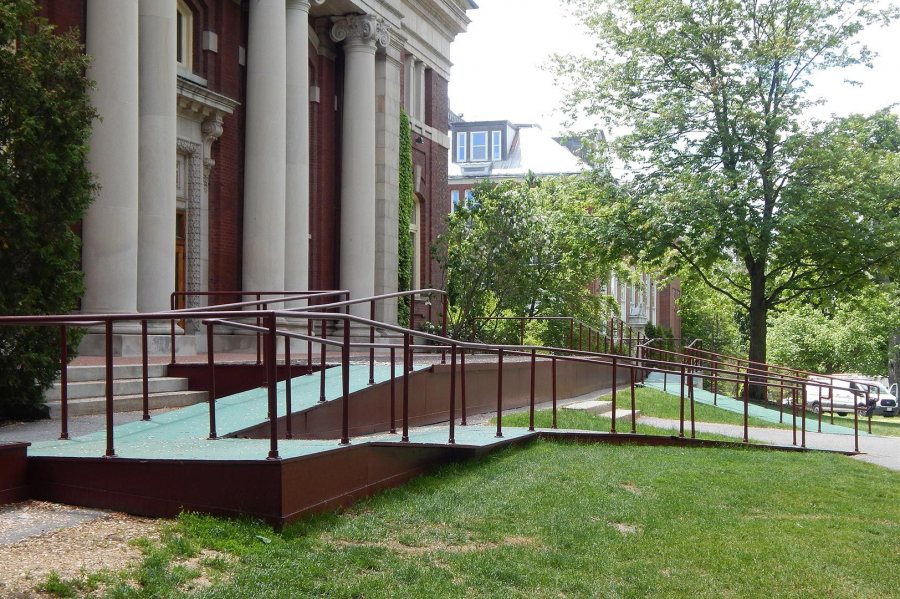 After decades of use, these portable wooden ramps trodden by thousands of graduating seniors will be history by Commencement 2019. (Doug Hubley/Bates College)

On Coram’s familiar east side, facing the Historic Quad, the contractor will use concrete and massive granite pavers — 18 by 36 inches, so keep your toes out of there when they’re laying ’em down — to extend the library’s porch 15 feet outward from the current structure. That will provide a permanent and deeper “stage” for public events.

Summer access to Ladd will be via a door down near the loading dock, facing Hedge Hall. The Coram porch work will be finished in time for Convocation, with finishing touches on the plaza project continuing into the fall.

Project architect is Gale Associates, with six offices from New Hampshire to Florida. Michael Boucher Landscape Architecture of Freeport, Maine, the firm that designed the Parisian-feeling Den Terrace a few years ago, is in charge of look and feel for the new plaza. 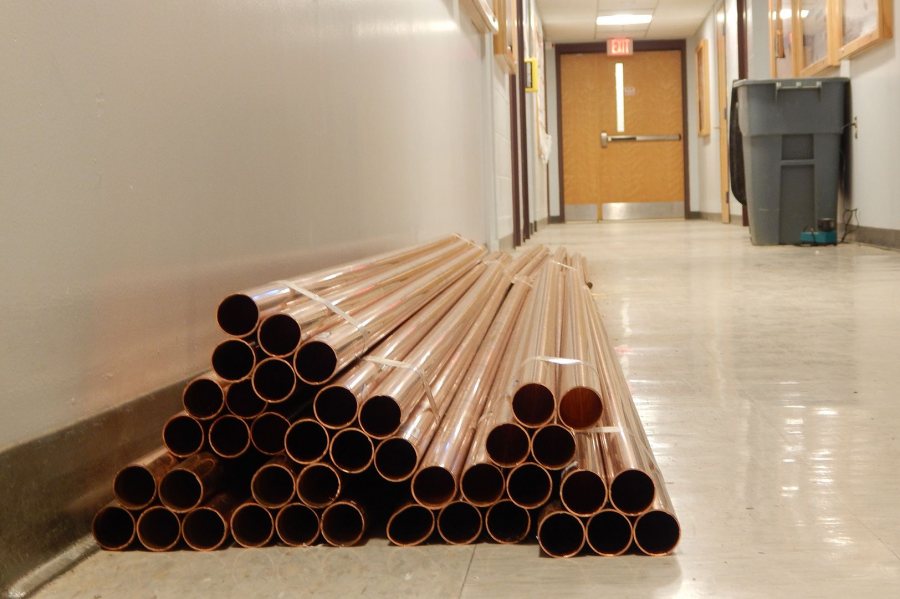 Carnegie hot water: Underway now and through the summer is a project to upgrade the hot water supply in Carnegie Science. The crux of the matter, says project manager Alan Kelley, is to equip the system to recirculate hot water — that is, to maintain a hot-water loop instead of the current one-way, source-to-outlet flow.

Thanks to the physical proximity of the loop throughout the building, that will dramatically shorten the wait for hot water.

At the same time, plumbers and engineers for Damon Mechanical will reconfigure a gas-fired boiler, until now used only in the summer, to supply domestic hot water year-round. That will supplant a heat exchanger that depended on the campus-wide steam supply to heat the water. (The gas boiler, in fact, was originally installed to bridge the summer months when campus steam is shut down.)

They’ll also move the water tank from the basement to the fifth floor, where the heater is located. And, while they’re running all those new pipes for the circulating loop, they’ll also replace the original hot water supply lines, many of which have started to leak. 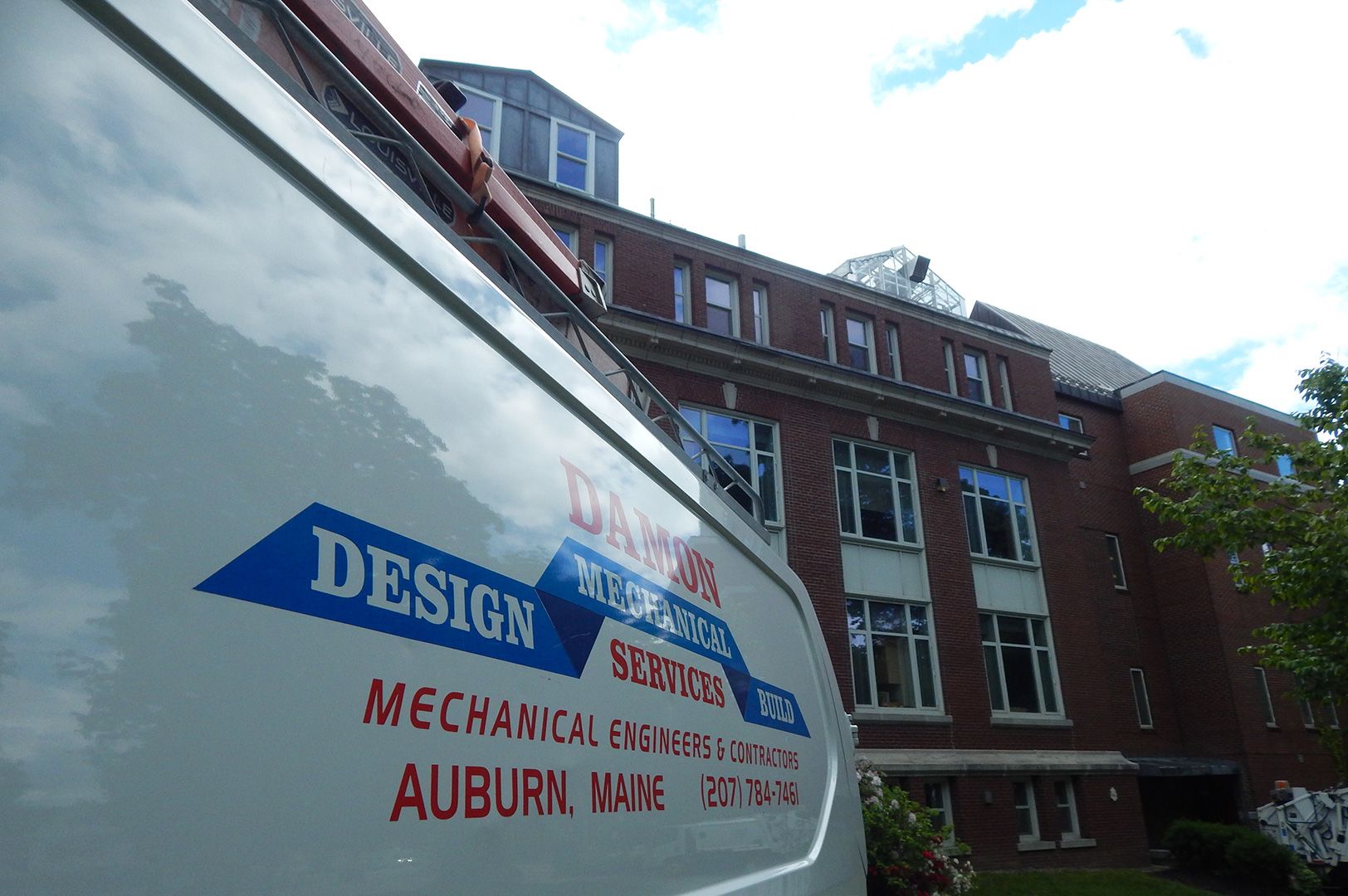 This van belonging to Damon Mechanical is parked about where a crane will be stationed in July for use in a major HVAC project atop Carnegie Science Hall. (Doug Hubley/Bates College)

Carnegie air: While the hot-water work proceeds out of public view, a second Carnegie project will be more than noticeable. For much of July, a crane will occupy a swath of the Historic Quad adjacent to the science hall as major components are replaced in its rooftop air handler. 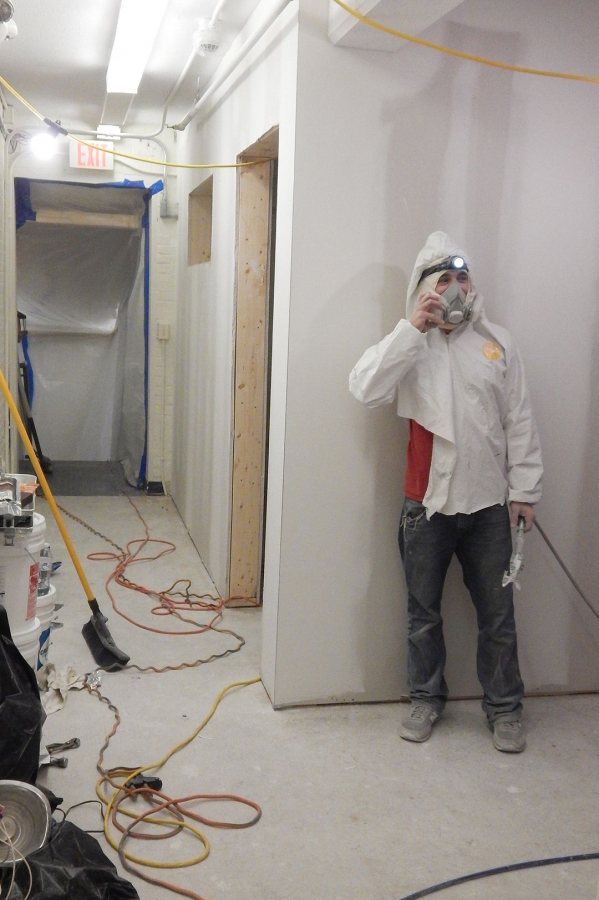 Nick Nolin of Weatherize Northeast takes a break from spraying primer in the future Accessible Education office on May 31. (Doug Hubley/Bates College)

Installed around 1990, during the building’s most recent expansion, that massive HVAC plant is Carnegie’s primary source of heating, cooling, and ventilation. Its key components are at the end of their useful lives, says project manager Chris Streifel, and the replacement project will preclude a catastrophe HVAC failure — in January, say, when it’s 10 below.

“If they failed unexpectedly, it would be a huge problem,” Streifel says.

Situated in a penthouse under the rooftop satellite dishes, the items to be replaced are fans, which Streifel likens to jet engines in appearance and personality, and coils for heating and cooling. Four in all, the units are big and very heavy, and, given their location five stories up, the project will be no walk on the beach.

Streifel adds, “Right now, the plan is for the crews to work seven days a week, 12 hours a day, to get this done in as short a window as possible and minimize the impact on the building occupants.”

Mounted on a semi-trailer parked in the courtyard between Carnegie and Chase Hall, a temporary HVAC unit will seek to keep conditions inside Carnegie tolerable, feeding conditioned air through a duct up the side of the building to the roof and into the building’s own ductwork.

The project begins July 12, and the crane will show up in mid-July, occupying a barricaded work zone on the west side of Carnegie. The planned completion date is Aug. 30. Dynamic Air Corp. of West Kennebunk, Maine, is providing equipment and additional expertise, and technicians from Thayer Corp. of Auburn will do the hands-on work.

Notes From Underground: Mechanical and electrical services manager for Facility Services, Alan Kelley is also project manager for the North Bardwell utilities work. The project involves three sets of underground pipes — water, campus steam, and sewerage — and, perhaps counterintuitively, the big excitement is in the sewerage.

Those old 12-inch clay pipes, part of the city’s original sewer system, are at risk of collapse. But, as Kelley explains, they won’t be replaced: Instead, a project subcontractor, Texas-based Layne Inliner, will blow a new uncured fiberglass liner into the old clay pipes and then inject steam into the lines to harden the fiberglass.

The steam and water pipes, in contrast, will be replaced.

Above ground, the most visible evidence of the project will be tree work. Whitney Tree Service of New Gloucester will remove the evergreens now separating North Bardwell from Garcelon Field. Sounds alarming, but in fact, removing those spruces will restore a landscape concept from retired landscape designer Bill Bergevin. The deciduous shade trees he planted alongside the spruce will now be able to flourish.

Whitney will also remove a big old pine next to Smith that appears ready to cause trouble.

Can we talk? After a smorgasbord like this, what questions could anyone possibly have? Never mind, we want to hear from you anyway. Send your questions and comments about past, current, and speculative construction at Bates to Doug Hubley. Please put “Construction Update” or “You guys get a meditation garden, too?” in the subject line. 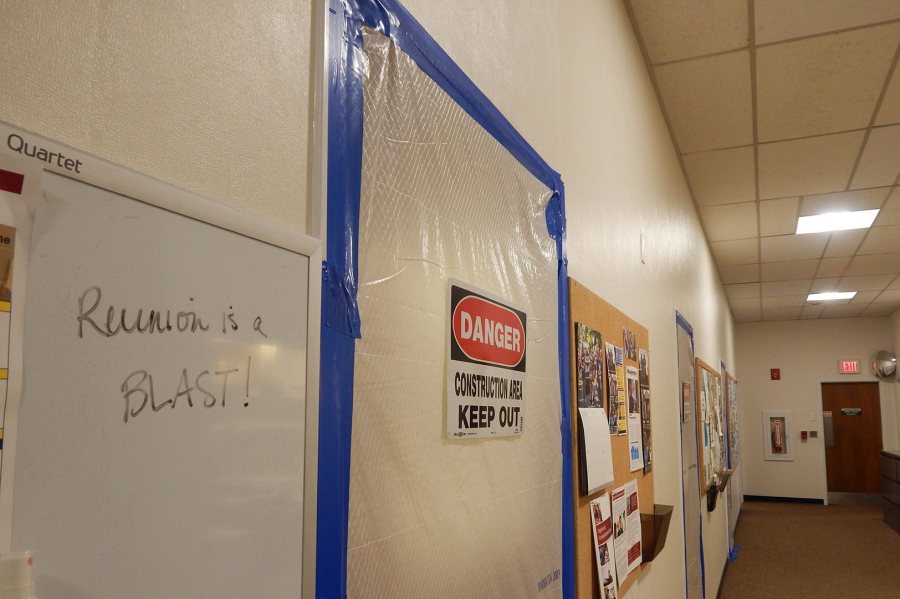 An entrance to the future home of Bates Communications on the ground floor of Lane Hall. The area is sealed off and posted while asbestos abatement is performed. (Doug Hubley/Bates College)