Ella Baker, a leader in the civil rights movement, understood that activism has to address many issues, according to historian, author, and activist Barbara Ransby. Systems of racism, sexism, classism, and empire intersect to create oppression.

“She really invites us to have a holistic approach to social change,” Ransby told Associate Professor of Psychology Michael Sargent during a recent interview. 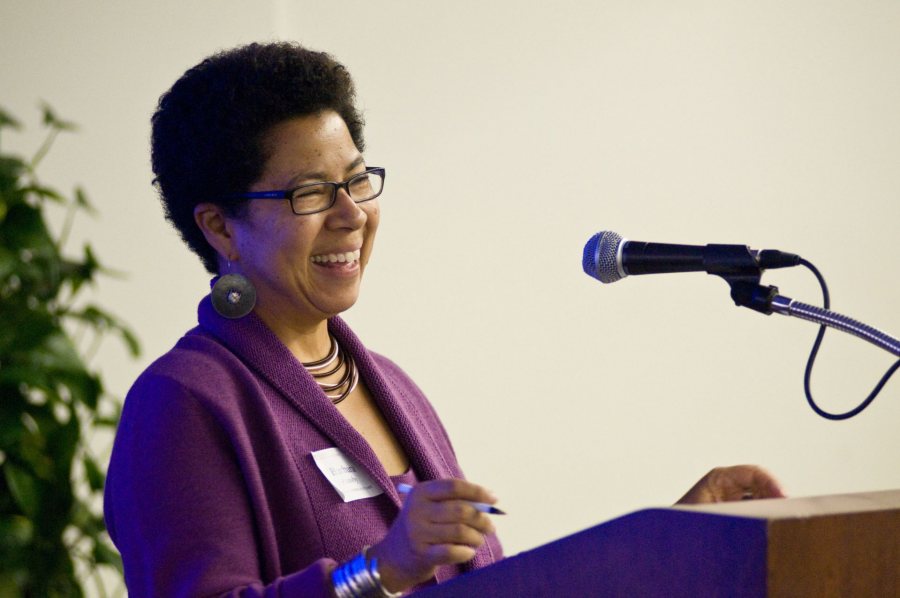 Distinguished Professor in the departments of history, gender and women’s studies, and African American studies at the University of Illinois at Chicago, Ransby is the author of Ella Baker and the Black Freedom Movement: A Radical Democratic Vision and Making All Black Lives Matter: Reimagining Freedom in the 21st Century.

In the spirit of Baker’s vision of justice and grassroots activism, Ransby will speak on intersectional feminism in the black freedom movement during her keynote address at Bates’ annual Martin Luther King Jr. Day observance on Jan. 21.

Due to weather-related travel disruptions, the 2019 MLK Day keynote by Barbara Ransby has been canceled. Please check the MLK Day schedule for all weather-related updates.

Sargent, a co-chair of the Martin Luther King Jr. Day Planning Committee at Bates and host of the podcast Tatter, interviewed Ransby in December.

Click on the player below to hear an interview with MLK Day speaker Barbara Ransby by Associate Professor of Psychology Michael Sargent.

From Sargent’s interview, here are six insights from Ransby into issues central to MLK Day and her keynote talk, including a definition of the important social justice term “intersectionality.”

Audre Lorde, the great black lesbian organizer, who died a number of years ago, had a quote where she said, “We cannot build single-issue movements because we don’t live single-issue lives.” I think that’s a great entree to intersectionality.

A second point is not just about individual identity, but about systems, that there are systems of oppression that intersect and reinforce each other, most notably racism, sexism and patriarchy, capitalism and class inequality. All these systems intersect and build upon each other in very intricate ways.

In order to really move toward a more just society, we need a holistic approach to combating injustice that includes multiple communities and targets multiple systems of oppression.

Sometimes we place a burden on Dr. King’s legacy that even he would not have appreciated, and that is this singular great-man version of the civil rights movement. I think he himself understood that while he took sacrifices and made contributions, it really was the work of many other people who made the movement possible and his greatness possible.

In order to really move toward a more just society, we need a holistic approach to combating injustice that includes multiple communities and targets multiple systems of oppression.

One of the lessons of the Black Lives Matter movement now is that to model the leadership that empowers grassroots people is what’s more sustainable. We saw in the 1960s a number of heroic figures, like Martin Luther King, Malcolm X, and others, who were assassinated, and others who changed political course, and that points to the fragility of a certain model of leadership, a messianic model of leadership.

What my own scholarship and practice has been very much about is a different approach, a feminist approach, a grassroots approach — but it’s also not an approach that Dr. King would have been hostile to at all. An example that comes to mind is his acceptance speech when he received the Nobel Peace Prize. 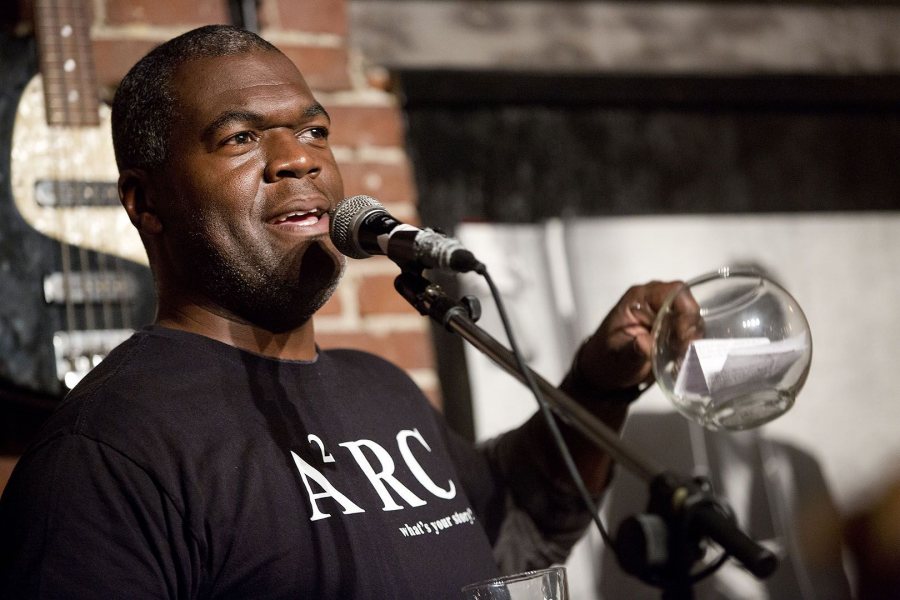 Associate Professor of Psychology Michael Sargent hosts the podcast Tatter as well as regular storytelling events. Sargent is pictured here at a 2014 edition of The Corner, a storytelling event he founded. (Phyllis Graber Jensen/Bates College)

He talked about himself and others being cast as the pilots on an airplane of justice, and he talked about remembering the ground crew without whom our journey would not have been possible. There are many eloquent metaphors that he used to talk about grassroots organizers and the masses of ordinary people who participated in what we now term the civil rights movement.

Ella Baker was born in 1903 and died on her birthday in 1986 and was active in the struggle for racial and social justice throughout her life. She was active as an organizer in the 1930s in Harlem, she worked with the NAACP in the 1940s, and worked alongside W.E.B. Du Bois and Thurgood Marshall and later Dr. Martin Luther King.

She’s probably best-known as the founder and mentor to the young people in the Student Nonviolent Coordinating Committee, who of course launched the desegregation sit-ins, the desegregation rides, and Freedom Summer in 1964.

I bring Ella Baker with me wherever I go.

Ella Baker had a particular approach to organizing and to leadership. She very much emphasized bringing the most marginal members of any community to the center of social justice organizing, and she also felt like ordinary people had the power to determine the priorities within their communities and lead justice campaigns and freedom campaigns in those communities. 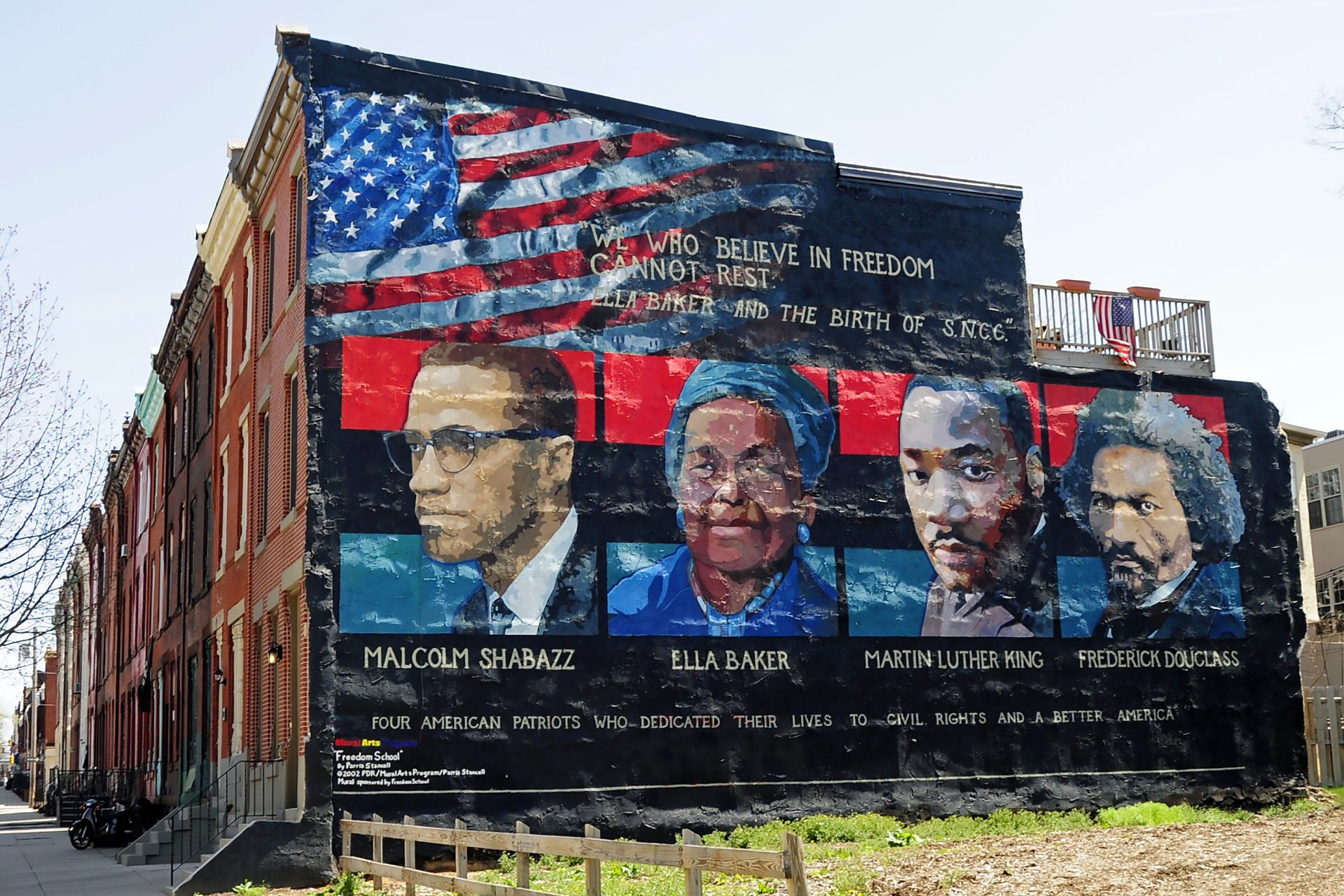 A mural on a wall of row houses in Philadelphia depicts, from left, Malcolm Shabazz (Malcolm X), Ella Baker, Martin Luther King Jr., and Frederick Douglass. The quote at top, “We who believe in freedom cannot rest,” is Ella Baker’s. The mural artist is Parris Stancell. (Tony Fischer / CC BY 2.0 https://creativecommons.org/licenses/by/2 / via Wikimedia Commons)

She did not subscribe to the charismatic, hierarchical kind of leadership model, and she was very critical of that model as it appeared in the civil rights movement, in the black churches, and other places. She was someone who mentored two generations of activists and is not as well-known as she should be.

Why it’s important to talk about Ella Baker on MLK Day:

I like to say I bring Ella Baker with me wherever I go. She’s a good person to have on your shoulder, in spirit, to remind us of how to ground ourselves.

I think the lessons of Ella Baker are very important, not only for her teachings about leadership and accountability to grassroots communities, but also she was very much about systemic change. She said we really need to look at the entire system of injustice and not just one small part of it.

The Black Lives Matter movement has focused not on the more “respectable” members of the African American community, but those people who the economic system has seen as disposable or superfluous.

I think that is something that’s missing in some of the work. We can easily become fragmented or single-issue-focused in our organizing. It’s hard to hold a very large set of issues in a coalition or larger movement formation, but I think that’s the challenge that Ella Baker would have us take up.

Why racial and economic justice go hand in hand:

That said, poor and working class black folks, people like Eric Garner and Tamir Rice’s family and Michael Brown’s family and others, are economically vulnerable and racially vulnerable. Understanding that intersection, if you will, between race and class is a real challenge and a lesson of the Black Lives Matter movement.

The movement has focused not on the more “respectable” members of the African American community, but those people who the economic system has seen as disposable or superfluous.

If we think of someone like Alton Sterling in Baton Rouge, who was killed in an arrest effort by local police there — what was his crime? He was selling CDs out of the back of his car. Or Eric Garner, who was strangled on Staten Island — he was selling loose cigarettes to help support his family.

In both of those cases, those men were functioning in the informal economy. They were poor and working class people, and that is as much a part of their profile and their vulnerability as the fact that they were black men.

The movement has not de-emphasized their class status but really pointed to the need for economic reform and economic justice at the same time that it has demanded racial justice.

The potential for a coalition of anti-racist and labor organizers:

We have to expand our notion of labor organizing. There are very large unions that fought for workers’ rights over many years and in some ways have become somewhat distant from community struggles that exist.

Then there’s new forms of labor organizations, like Worker Centers around the country, that have attempted to organize undocumented workers, temporary workers, seasonal workers, etc., and groups like the National Domestic Workers Alliance, which has done really important labor organizing around the Domestic Workers’ Bill of Rights. These are nontraditional labor organizations, so I just want to make sure they’re in the mix when we talk about labor and workers issues.

There are already some kernels of connections, some building blocks that are there. We need to do more. Labor is under assault, with the recent Supreme Court decision on the Janus Case. So far, public-sector unions are vulnerable, but all unions are vulnerable. I think it’s a hostile environment in many respects.

The challenge is to connect the dots, and that’s always our challenge, to line up where these movements can be connected.