It was 1976 and the city was a mess: municipal coffers depleted, public services in disarray, crime on the rise, outrage near the boiling point. Films like Mean Streets, Taxi Driver, and Death Wish showed America an apocalyptic reflection of its iconic metropolis.

As a bebop pioneer, a hero in a mainstream jazz tradition, Gordon’s return symbolized hope for jazz conservatives who felt betrayed by the music’s progressive wing. The saxophonist received a hero’s welcome at homecoming gigs at the Village Vanguard and elsewhere, a tidal wave of love and relief that didn’t go unnoticed by the mainstream press. (Not to mention the record labels: Gordon netted a contract with Columbia in short order and decided to move back to the U.S. for good.) 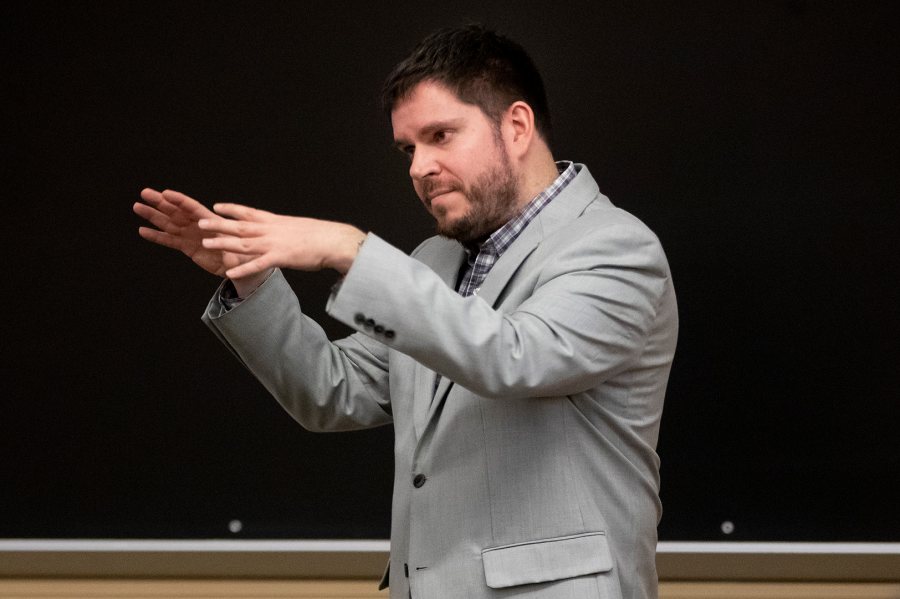 Dale Chapman, associate professor of music and author of The Jazz Bubble, leads a MLK Day workshop on the song “May We Forever Stand” in January 2019. Chapman co-led the session with professor Charles Nero. (Phyllis Graber Jensen/Bates College)

For old-school jazzers, Gordon’s triumphant return felt like some kind of a musical-moral victory. But it could also be read more sweepingly as a hopeful symbol of the ailing city’s redemption, argues a Bates music historian — albeit a misleading symbol that looked at fundamental problems of governance and finance and responded, “There’s hope for your culture.”

The Dexter Gordon episode sets up the themes that drive Associate Professor of Music Dale Chapman’s The Jazz Bubble: Neoclassical Jazz in Neoliberal Culture (University of California Press, 2018). One theme is the emergence of the neoclassical jazz movement of the 1980s and ’90s. The other is the advent of political and economic neoliberalism.

And Chapman makes a surprising yet convincing argument for certain parallels — if not actual symbiosis — between that celebrated conservative style of jazz, on the one hand, and the overwhelming financialization of the global economy on the other.

Ranging across political, social, and economic history as well as the music stories dear to Chapman’s heart, the book makes its point through examples as diverse as the use of polyrhythms in Miles Davis’ music vs. Wynton Marsalis’; the vilification of disco as a proxy for black and LGBT culture in New York; the assimilation of a landmark jazz label by a multinational corporation; and urban renewal in San Francisco.

What does Dexter Gordon’s triumphant homecoming have to do with neoclassical jazz? 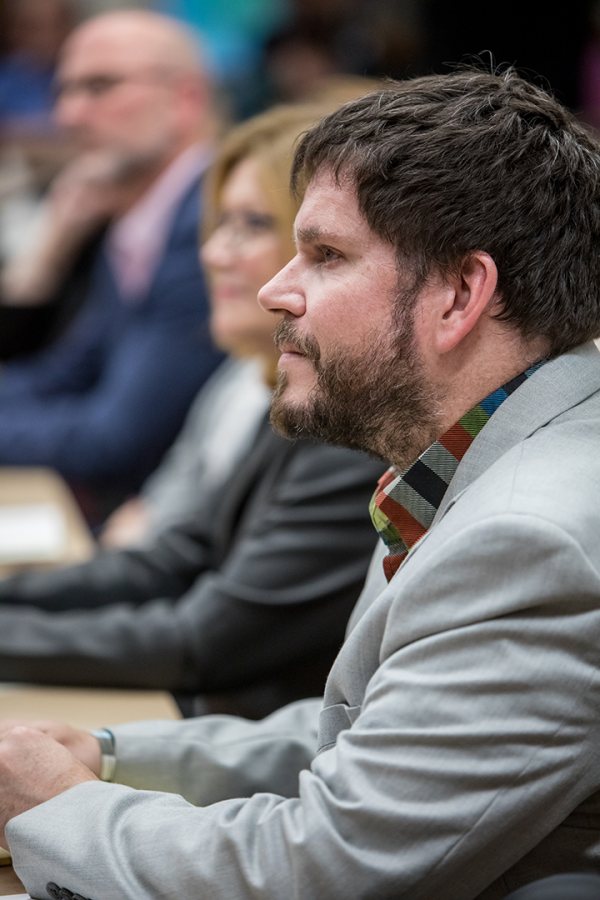 Gordon was recruited by Bruce Lundvall at Columbia Records, the very label that would also be aggressive in recruiting artists like Wynton Marsalis, Branford Marsalis, Terence Blanchard, Donald Harrison, and Harry Connick Jr. to the label in the early 1980s. And it was the label that really began to ramp up this idea of investing in a more traditional and straight-ahead notion of what jazz was about.

So what does “neoclassical” mean in the context of The Jazz Bubble?

As a particular stylistic development, neoclassical jazz espouses a certain idea of what the jazz tradition should do: It should turn back to the past and recuperate earlier musical styles, and at the same time, it should distance itself from tributaries of jazz like jazz-rock fusion or the avant-garde or the so-called New Thing, free jazz, from the 1960s. And it involves a group of predominantly young African American musicians, many of whom were among the first generation to draw explicitly upon formal jazz training in the conservatories.

But neoclassicism was also a particular marketing push in the 1980s. [In contrast to its early years,] jazz has become an idea that is safe for public consumption. It pays lip service to African American legacies of cultural contribution, but at the same time, it’s not particularly threatening to entities like corporations or government or philanthropists.

That’s important because then, they can look at it as a site where all sorts of playful and improvisatory and experimental things can happen. So it becomes a powerful metaphor for the way that things are going on in the free market itself.

And “neoliberalism,” in essence, refers to unbridled capitalism as we’ve come to know it since the Reagan and Thatcher years.

It’s the celebration of free markets, the idea of getting government out of the way — or harnessing government to turbocharge the possibilities of particular private entities. It focuses on the lone individual, and on their individual economic performance as the kind of metric by which everything should be judged.

One of your examples of the thematic ties between institutional interests and jazz takes place in San Francisco’s Fillmore neighborhood. The urban renewal authority first erased a robust, ethnically diverse community and its thriving grassroots jazz scene. And then, ironically enough, the authority partnered with big financial players to resurrect a “community” jazz identity there. 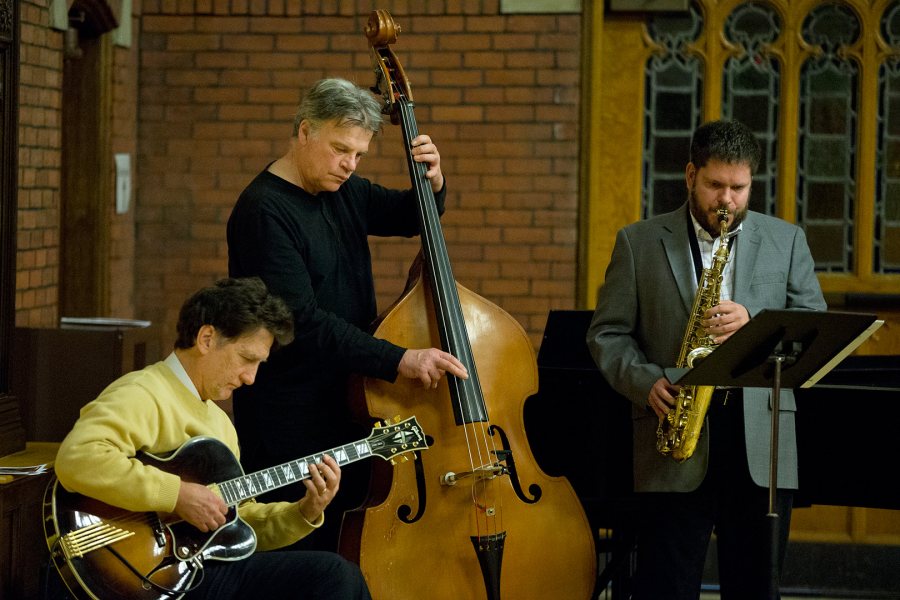 In an earlier moment, urban redevelopment in San Francisco was an aggressive government intervention using practices like eminent domain to displace thousands of small businesses and families to make way for bigger business. But since the 1980s, urban renewal is now intimately connected to the performance of bonds on the global financial markets.

So it’s interesting that the public face that the redevelopment agency has used to redeem itself, to make the system more amenable to the financial markets, and to build economic possibility in the city, is jazz — to build this mixed-use development with a jazz club in the basement and jazz-themed heritage entities off to the side.

In the 1980s, when neoclassical was on the ascendant, it was good timing for jazz commercially.

Jazz as a function of record sales had been dwindling for many years. So at the very moment that jazz had become less popular, it was nevertheless also becoming a kind of pop symbol of municipal or governmental or corporate initiatives that would draw upon the symbolism of jazz, its references of multiculturalism, and a whole number of other things.

Including improvisation, which reaches its apogee in jazz. But, as you point out, an improvisational stance that’s, arguably, worth celebrating in business is far removed from the origins of jazz improvisation.

In the financial industry, even if a situation is radically uncertain, people tend to believe optimistically that there are particular risk models that allow them to navigate it. In a similar manner, jazz is latched onto as this very positive, very playful site where risk unfolds.

Jazz has become an idea that is safe for public consumption.

People aren’t necessarily reflecting on the broader meaning of what it means to talk about risk in jazz, which is a tradition rooted in the traumatic legacy of black cultural production.

From slavery through to the present, African American peoples have been thrown, deliberately as a matter of policy or structure, into conditions of uncertainty. So to think about what jazz means against that — there’s this playful corporate idea that polishes things up and makes them attractive, but it doesn’t necessarily reflect the full nature of what is morally and ethically and politically at stake in those conditions of uncertainty.