High standards are something that Bates Film Festival audiences can brag about.

For example, the folks who viewed the 2018 short comedy Nefta Football Club at last November’s festival gave the film the Audience Award for Narrative Short, one of eight festival awards. And then, just a couple of months later, the Academy of Motion Picture Arts and Sciences affirmed that judgement by nominating Yves Piat’s film for an Oscar.

The 2019 Bates Film Festival presented jury and audience awards in each of four categories.

Yes, it’s true that the BFF is not Sundance or Cannes. But it’s also true that there’s real value in the awards program, which was inaugurated with last year’s festival and comprises an audience award and a jury award in each of four categories.

Value for whom? Well, for the festival itself, for starters. As an ongoing enterprise of the Department of Rhetoric, Film, and Screen Studies, the festival over time will see its reputation grow through the awareness-raising effect of the awards.

As for the honorees, those filmmakers benefit from a cash award —funded by BFF supporters — that, especially in the case of emerging auteurs, helps pay down debt or finance the next production. Perhaps more important, an award provides film artists with valuable moral support and validation.

A festival laurel tells “these artists that they’re making a difference in the world,” says Steven Brookman, a Bates parent and co-head of motion picture business affairs for Los Angeles-based Creative Artists Agency. Brookman also leads the Bates Entertainment, Arts, and Media networking group, or BEAM — and with his wife, Michelle Brookman, made the BFF Awards possible.

Yet, as befits a college-produced festival, the biggest beneficiaries of the BFF Awards are likely the students who organize the festival — that is, the students in professor Jon Cavallero’s “Film Festival Studies,” a course that puts current theory about the industry into play through the production of a real-world festival.

Those students take on virtually all aspects of organizing this public event that includes screenings, public discussions of the films and the medium itself, and visits from filmmakers, other participants in the featured productions, and scholars. 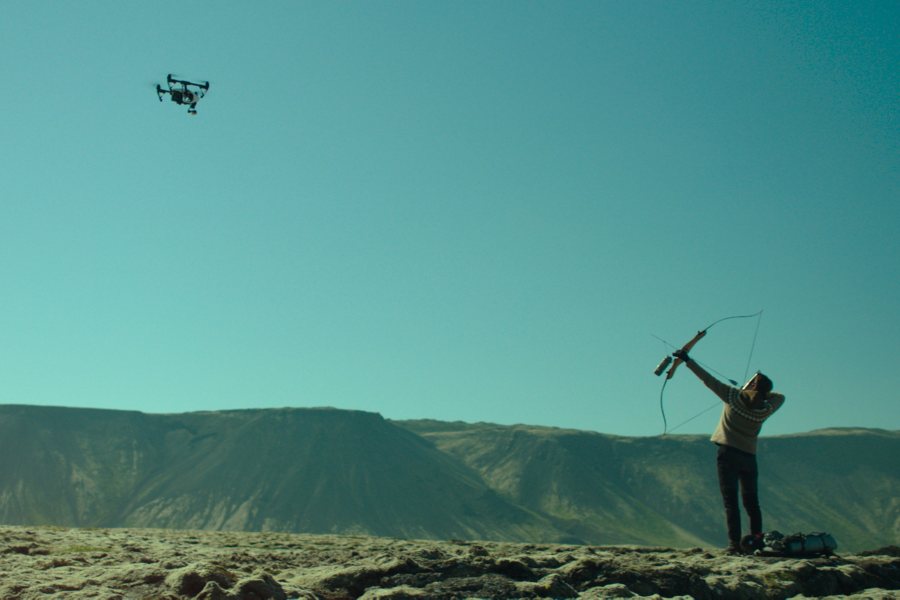 While film festival audiences, obviously, vote on Audience Award recipients, the festival’s student producers select the Jury awardees. And, as it turned out last fall, that process resembled a kind of capstone project for majors in rhetoric, film, and screen studies.

“The Jury awards place the students, who have seen all the films, in the position of an expert, somebody who understands various theoretical approaches to cinema,” Cavallero says. 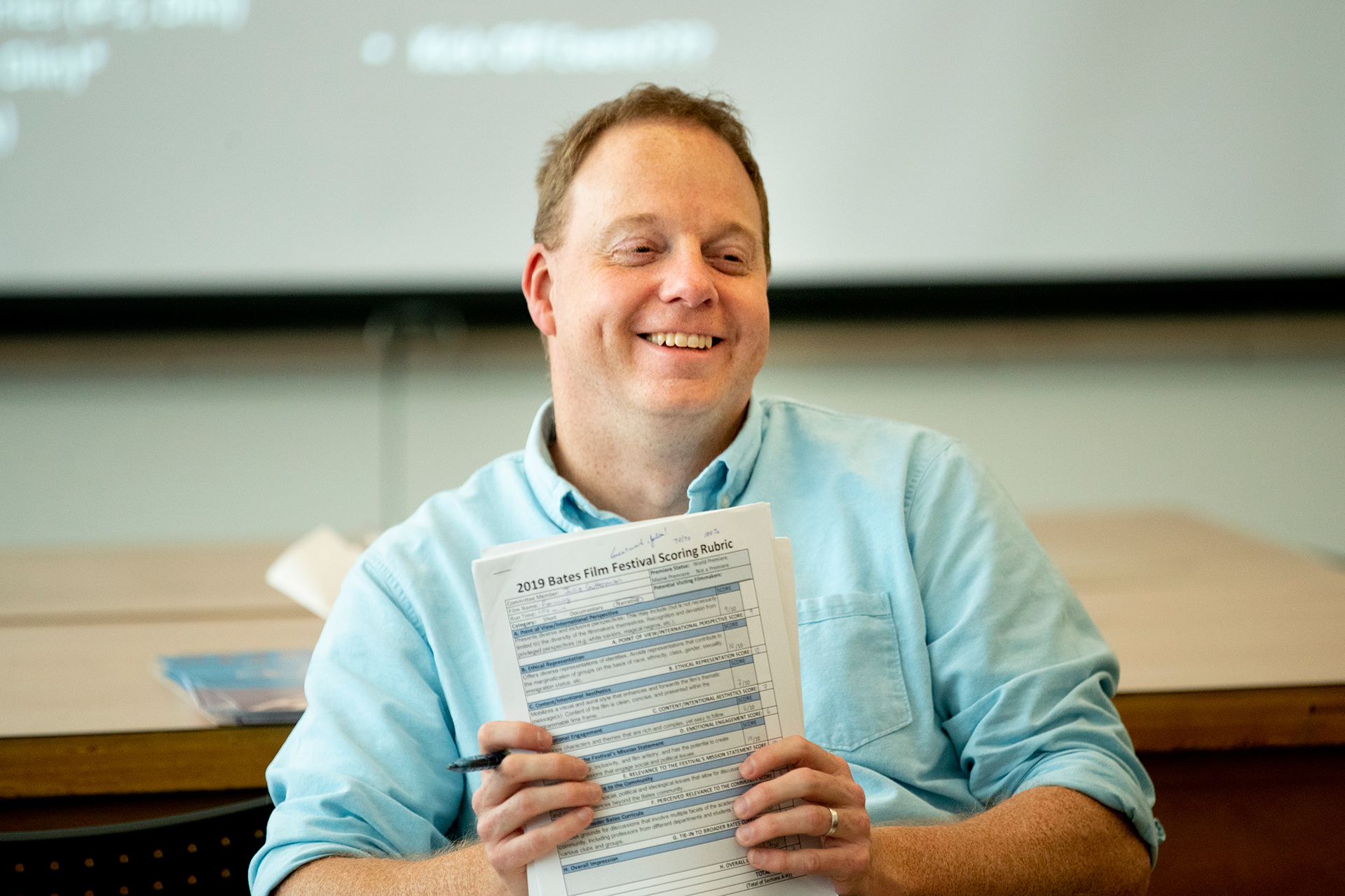 “As a class, we were taking everything we had learned in our previous courses in the rhetoric department and using that to guide our decisions with the awards,” says Julia Gutterman ’20, a double major in German and rhetoric from Mamaroneck, N.Y.

For example, the Icelandic film Woman at War, about a music teacher’s battle against the island nation’s aluminum industry, drew unqualified raves at the festival screening and received the Audience Award for Narrative Feature. But, says Cavallero, his students’ responses were more specific and nuanced, scrutinizing the film’s treatment of climate change and its representation of women.

The process was also a useful exercise in navigating a welter of different ideas to arrive at consensus, says Abel Ramirez ’20 of Denver, a double major in rhetoric and Spanish. “I truly learned how to negotiate. That skill will definitely be useful once I leave Bates.”

The substantiveness of the debate was a pleasant surprise to Cavallero. “I thought the discussion about awards would take, like, half a class, and it stretched over three. It was fantastic to see.” 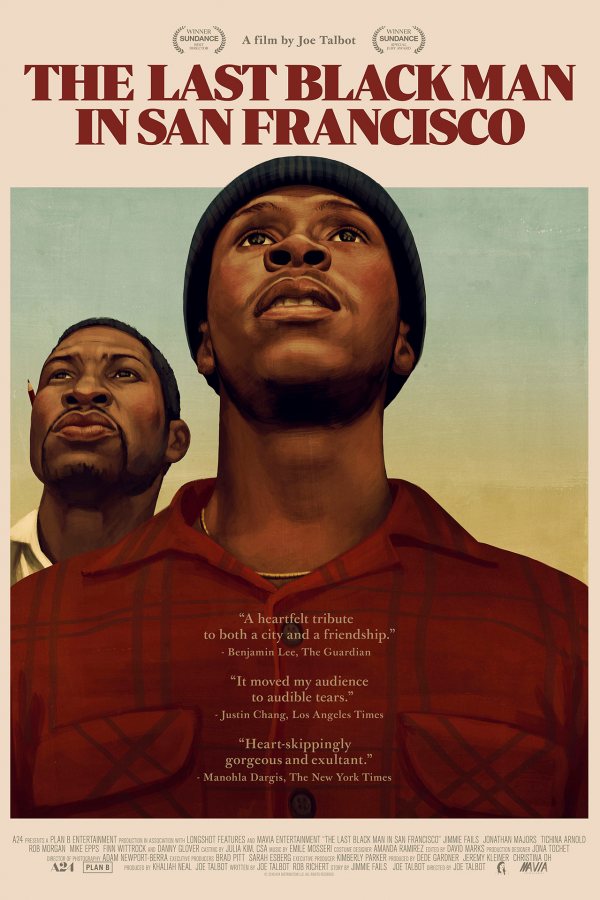 The students deciding the Jury awards viewed each entry in light of a rubric, or a set of points for consideration — for instance, did the “film form,” a movie’s aesthetic machinery, effectively convey its message? The rubric had been prepared months previously by Cavallero and students in a Short Term Innovative Pedagogy (Re)design course.

A prime criterion for a Jury Award was alignment with the festival’s mission statement, which has a pronounced social justice component, Gutterman says. The jurors also considered what “the film aesthetically did for the medium, and how it challenged ideas in either filmmaking or just in its story.”

And the students pondered a tactical reality rooted in the film industry ecosystem: Should they consider a potential recipient’s reputational value to the Bates festival? “It was almost like, do we think of that self-promotion when we’re awarding a film or should we not do that?” Gutterman explains. And then, in a meta sort of way, “the conversation definitely came up as to how much that played into our decisions.”

In fact, there’s no shame in wielding a festival laurel wreath as a promotional tool, as evidenced by their abundance among film marketing campaigns. For Bates, of course, awards are a way to get the festival’s name out — and to discerning eyes, the pairings of film and BFF Jury award signal the festival’s values and interests.

“We’re seeking films to show,” as Gutterman says, “and then maybe people will want to submit films for us to show, and it turns into something bigger.”

Providing pecuniary as well as promotional value, the awards program “makes our festival more attractive to filmmakers,” Cavallero says. Short films, in particular, “usually are not made to make money — they’re made by people that love filmmaking and think they have something to say.” 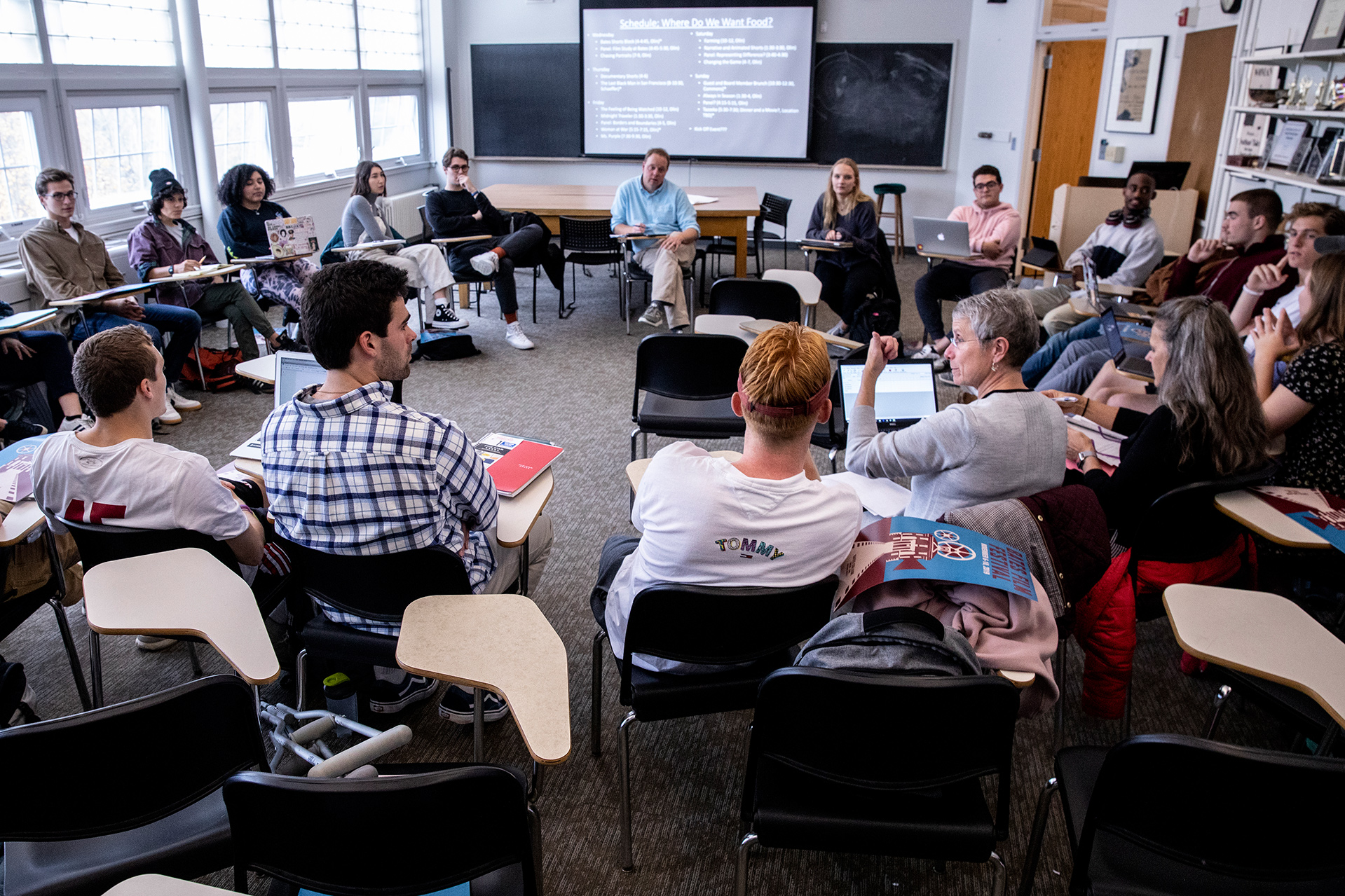 Cavallero points out that in their thank-you for the BFF Jury Award for Narrative Feature, the makers of Last Black Man in San Francisco noted specifically that the cash prize is going directly to salaries for the film team’s next picture.

“We highly appreciate this honor that you’re giving us because the movie meant the world to us,” Last Black Man star and co-writer Jimmie Fails said. “All we ever wanted to do was make art that will last forever and we plan on continuing to do so.”

A BFF award “is a recognition of work well-done, but it also helps more work to be made,” Cavallero says. “I think, increasingly, as big movies dominate the megaplexes and independent films end up going to festivals, it’s important for festivals to step up and support this kind of work.”

Brookman, whose agency, an industry powerhouse, represents the interests of major figures in entertainment, sports, and media, agrees. Especially given the Bates Film Festival’s ethos, he says, the festival awards spotlight “the kinds of things that move the needle out there in the world. It’s film having high impact.” 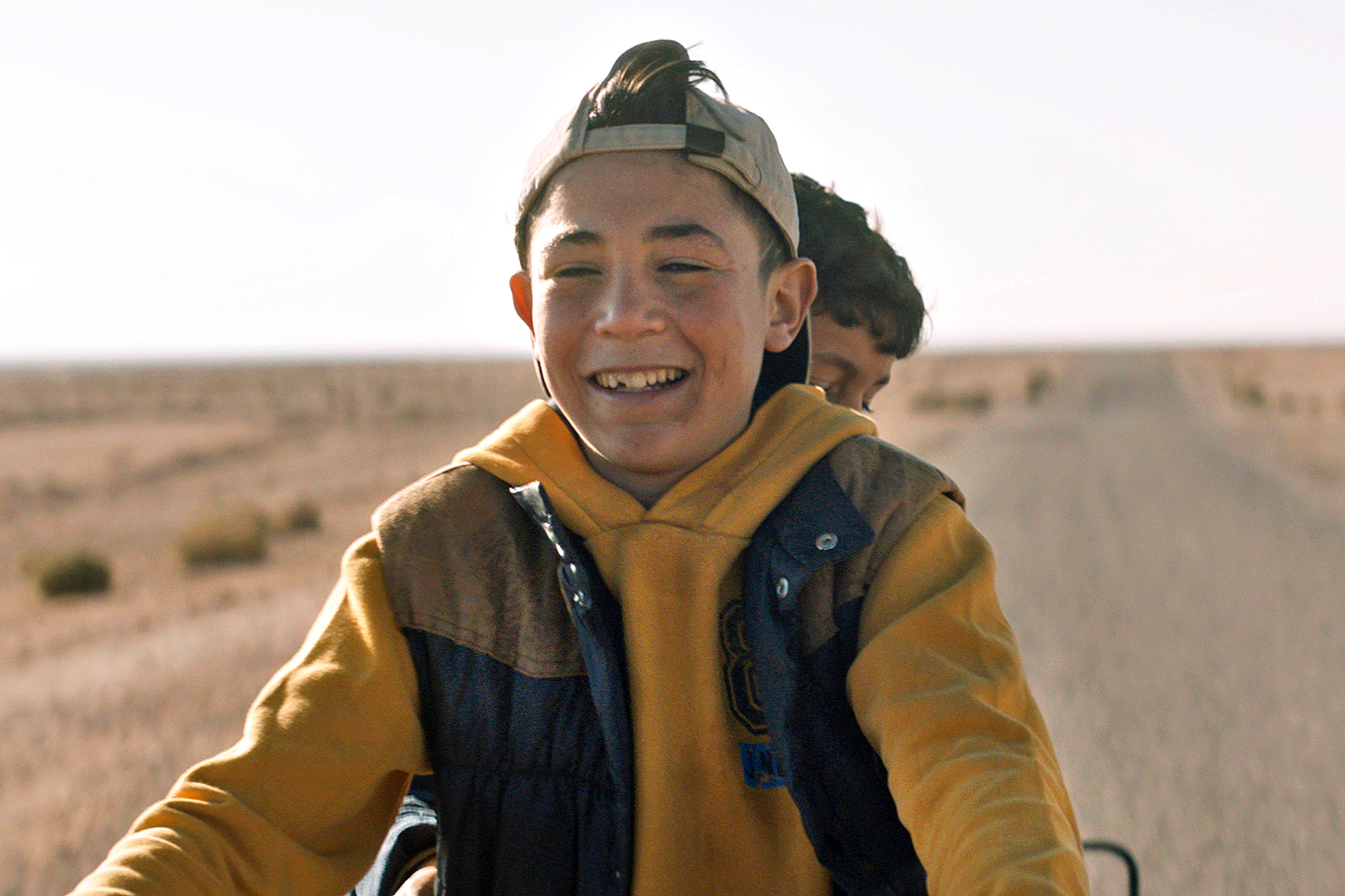 A scene from the Oscar-nominated Nefta Football Club, 2019 Audience Award winner at the Bates Film Festival.