At age 50, Bates dance is still ‘the same awesome experience’

A Bates tradition — springtime reunions among the college’s dance alumni — saw a new chapter this year.

Plavin died in 2016, at age 84, and this year’s gathering was the first since her passing.

Held April 26 to 28, the 2019 edition drew 70-plus alumni, from classes of the ’70s on up, who returned to mark the 50th anniversary of the dance company’s first performance under Plavin’s leadership, celebrate dance in their lives today, and look to the promising future of dance at Bates. 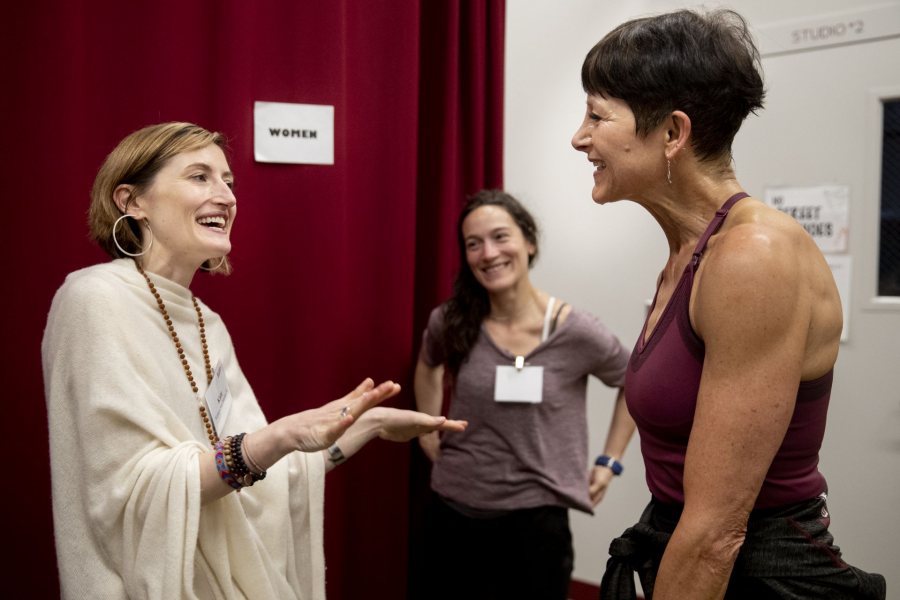 Prior to one of the workshops on Saturday morning, Kathryn Ryan Brigham ’02 (left) greets Lynda Plavin Fitzgerald ’79, daughter of the late Marcy and Leonard Plavin. (Phyllis Graber Jensen/Bates College)

The weekend, produced by Professor of Dance Carol Dilley with skilled help from Hannah Miller ’14, a veteran of prior dance reunions, featured workshops, performances, and discussions, both casual and guided.

Over lunch on Saturday, alumni broke into groups to talk about how dance has infused their lives and work. “We’ve never done this before,” said Dilley, who succeeded Plavin in 2003 and led the effort to transform the dance program into an academic major in 2011.

As noon approached, alumni milled around upstairs in Commons, talking quietly while grabbing brunch at the buffet spread. No doubt hungry following the morning’s alumni-taught dance workshops, the dancers filled their plates and headed into three meeting rooms for discussion sessions sponsored by the Center for Purposeful Work.

Each session had a theme — dance and activism, bodies at work, and dance as a mindset — and was moderated by students, who asked the alumni about their work and their lives at Bates, gleaning advice from their combined years of experiences. Though formal-sounding, the setup created spaces for easy conversation between the current and former students. 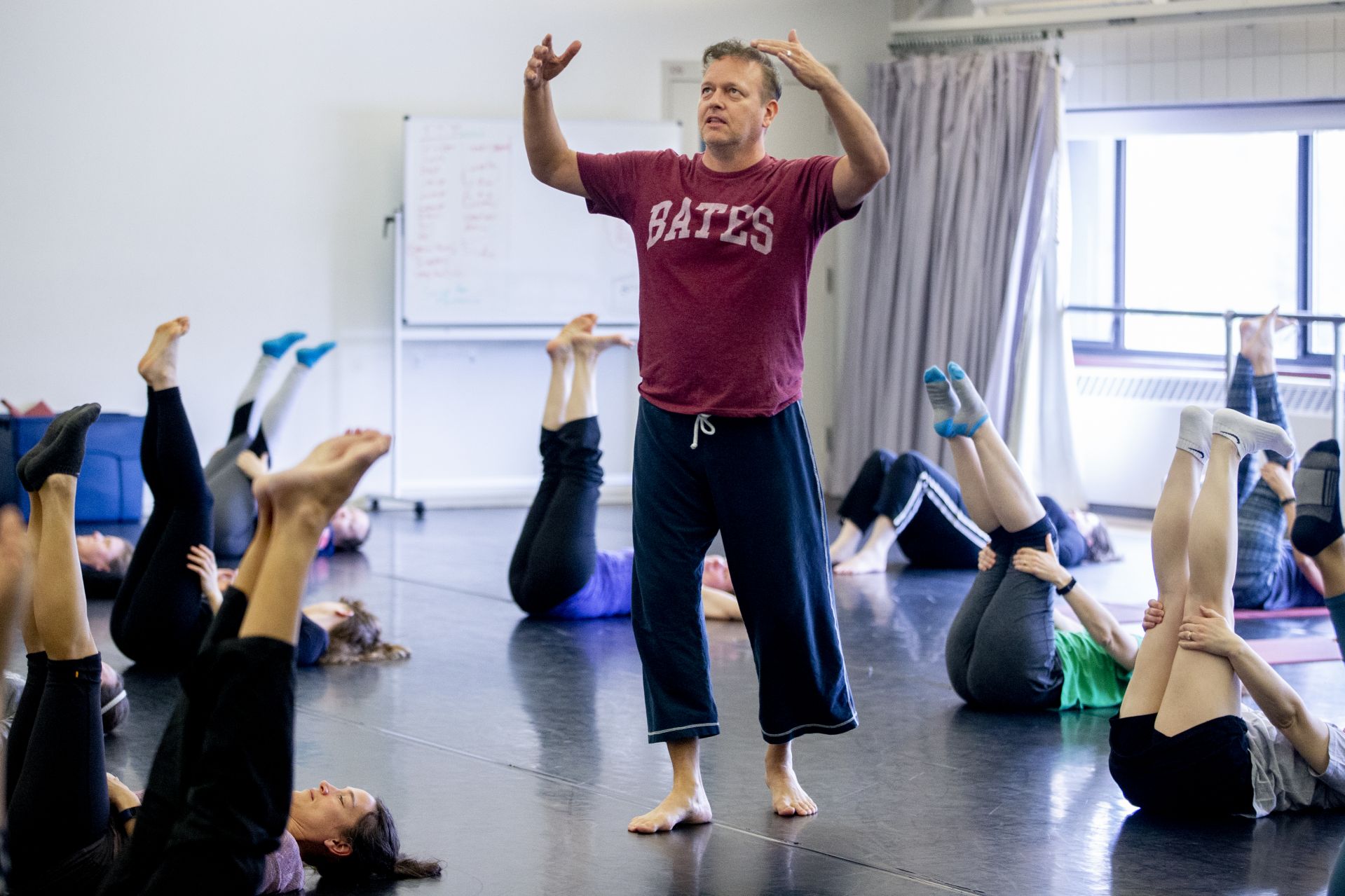 On Saturday morning, Michael Foley ’89 led a workshop on dance for the over-40 set in the Marcy Plavin Dance Studios. “One of the big Batesisms is the intersectionality between all of your interests,” he said. (Phyllis Graber Jensen/Bates College)

In one session, moderators Helen Carr ’21 of Tarrytown, N.Y., and Ellie Friends ’21 of Deerfield, Mass., asked Ya-Ya Fairley ’12, who had just taught a morning workshop on Afro house dance, and Talia Mason ’15 how they’ve been able to use their art as activism.

A double major in dance and anthropology, Fairley, who uses the pronouns “they” and “them,” described setbacks while they earned a master’s degree in performance from the University of Utah.

“Whatever I did was hyper-politicized because of the space I was in. Just the act of putting my ideas out there is inherently activist — and putting my black, trans, queer body in those spaces really embodied the act of activism.” 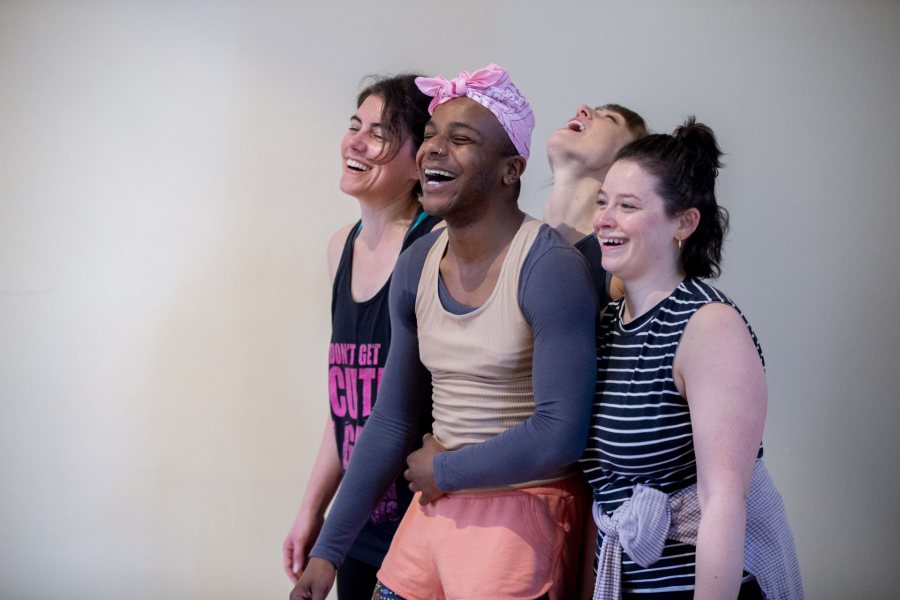 Though facing flak from faculty who disapproved of their student’s innovative and radical choreography, Fairley said the experience provided “a healthy push” for their personal artistry.

Mason, a Phi Beta Kappa double major in dance and French at Bates, has a post-baccalaureate degree from the Headlong Performance Institute in Philadelphia, teaches dance at a Montessori school, and is a solo performance artist.

Her activism is also intrinsically linked to her study of dance and performance. She is interested in depictions of Judaism in dance and asks questions about how art can confront anti-Semitism in America. 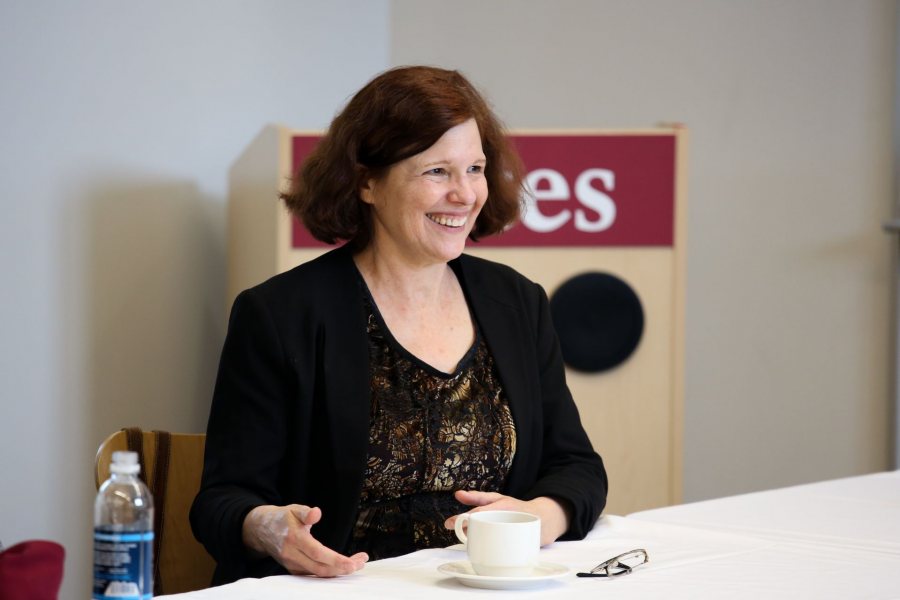 “Making work with an activist lens is more daunting in the real world than in college,” acknowledged Mason, who is soon to begin a master of fine arts program in dance at the University of California, Riverside.

In the “Bodies at Work” session, choreographers, teachers, therapists, and producers told moderators Kellie Allen ’21 of Pleasantville, N.Y., and Esme Goldfinger ’21 of Portland, Maine, how Bates prepared them for their careers.

“There is no absolutely no way I would be the writer or researcher I am today if I hadn’t been at Bates,” said Artemis Preeshl ’84, a visiting professor at Elon University who has taught acting, movement, and voice on five continents. Preeshl contributed a workshop session on “Making a Safe Rehearsal / Performance Space.” 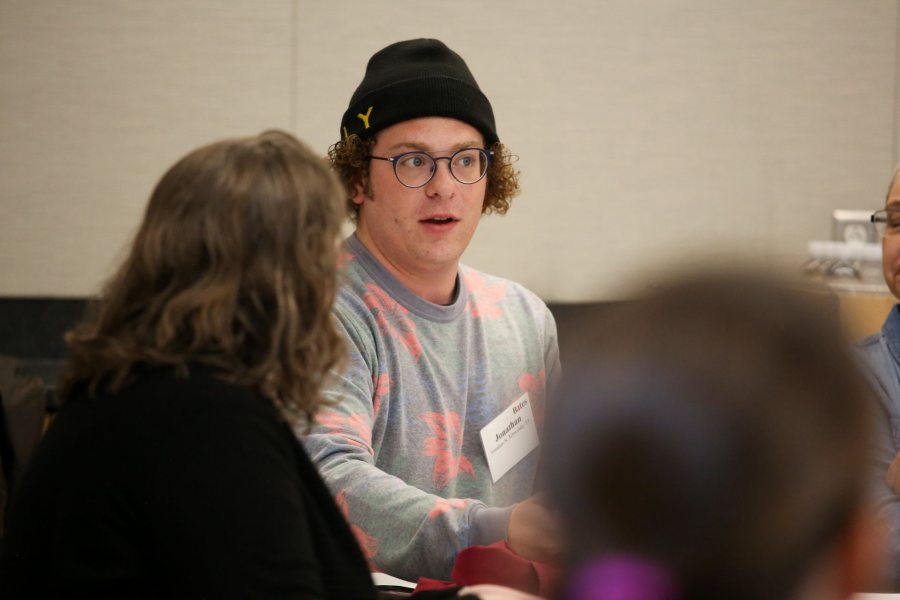 A double major in theater and rhetoric, Jonathan Schwolsky ’15 completed his theater thesis in the relatively obscure field of experimental comedy. “There were enough people here to support me to do that,” he said.

“One of the big Batesisms is the intersectionality between all of your interests,” said Michael Foley ’89, a professor of dance at the University of South Florida and director of the USF Dance in Paris program.

“I think much of the world is very monolithic,” he said, reflecting on his experiences as a teacher and choreographer (including a whimsically named morning workshop, “Modern Dance for the ‘Over 40s’!!”). “There’s something about the intersectionality of Bates that I’m constantly reflecting on. I’m trying to incorporate this idea of egalitarianism about how people get a voice into my work.” 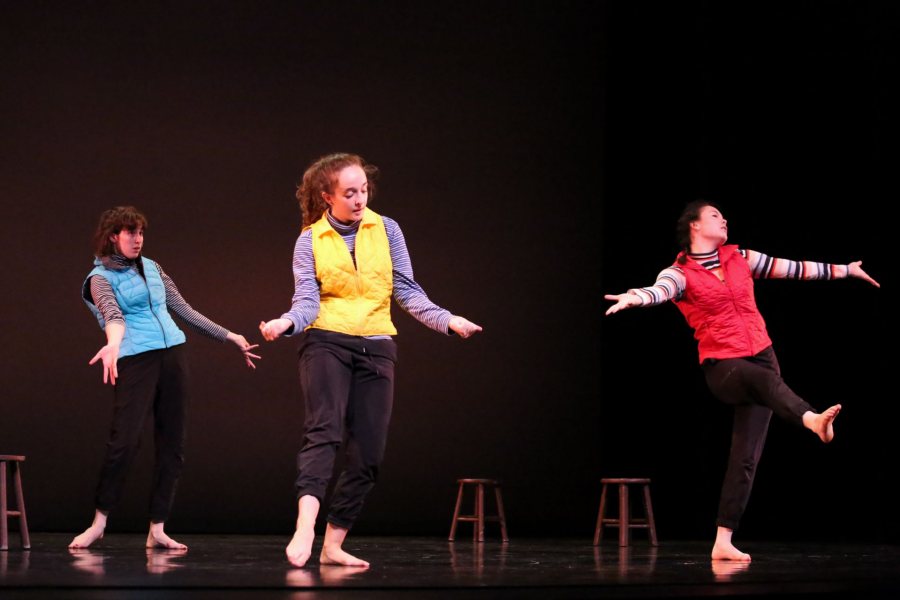 As the noon sessions wrapped up, some alumni and students headed to another round of workshops; others mingled at the interactive dance archives exhibit in Gannett Theater that featured vintage costumes and performance programs from decades of Bates dance.

With support from the Muskie Archives and Special Collections Library, the exhibit was curated by two seniors, Sara Hollenberg, a double major in dance and mathematics from Stamford, Conn., and Rebecca Howard of Aspen, Colo., a double major in art and visual culture and religious studies with a minor in dance. 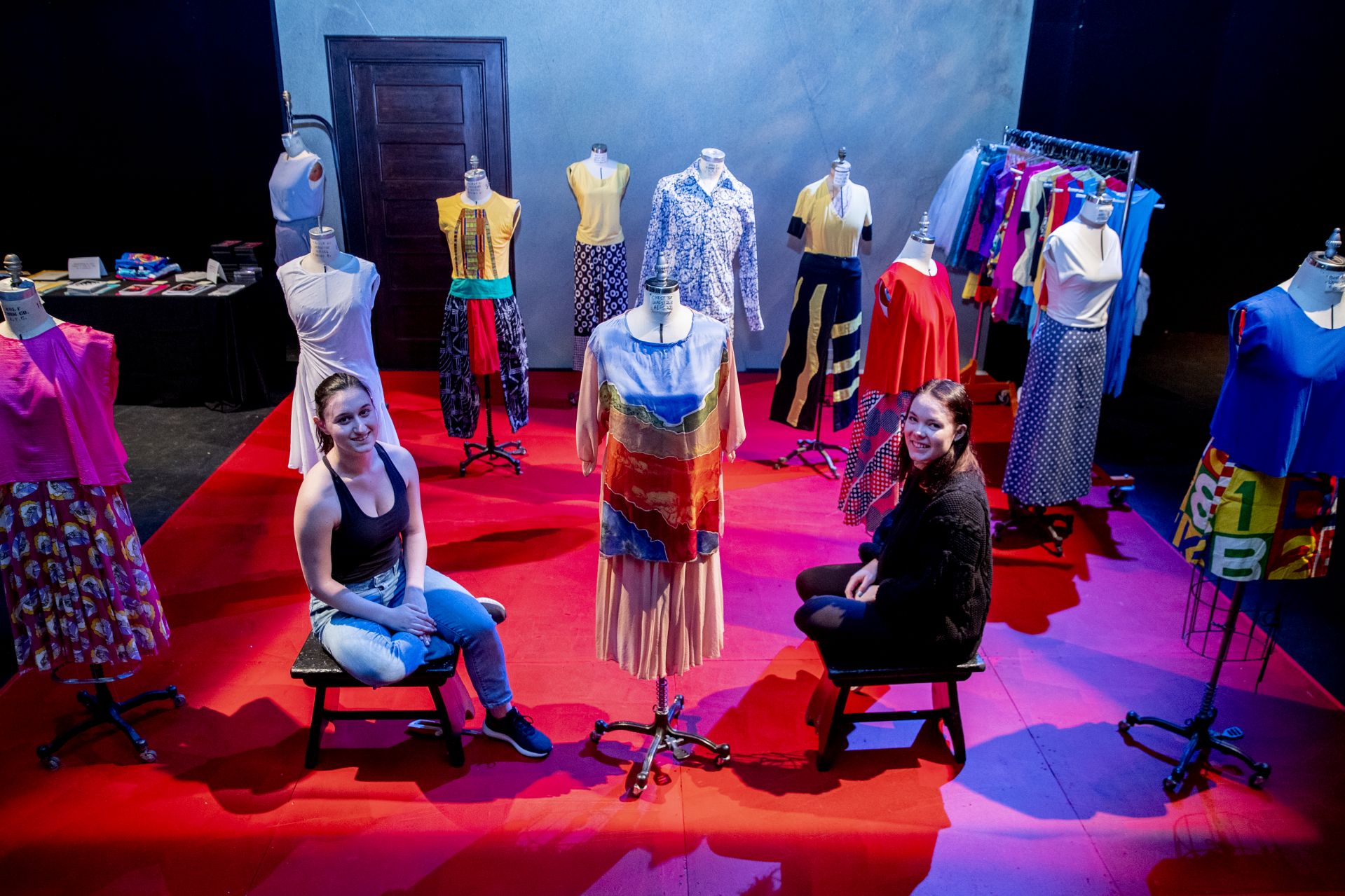 In Gannett Theater, Sara Hollenberg ’19 of Stamford, Conn., and Rebecca Howard ’19 of Aspen, Colo., pose among items that they curated for an interactive dance archives exhibition. (Phyllis Graber Jensen/Bates College)

The project left Howard impressed by “both the depth and the breadth of what the Bates dance program has been.” It was also another way to honor Plavin: “a way to weave her memory in, in a permanent sense. And reminding people of that.”

“Then you add to that with all these other alums who have shared the same awesome experience.”

For Hollenberg, the exhibit spoke to the many and surprising ways that alumni find ways to connect across the years. She pointed to a pair of costume pants. “They’re so popular — somebody wears them every year in a concert. Alumni come in here and bond and are like, ‘I wore the pants!’

“You have a community that is your class and the classes around you. Then you add to that with all these other alums who have shared the same awesome experience.” 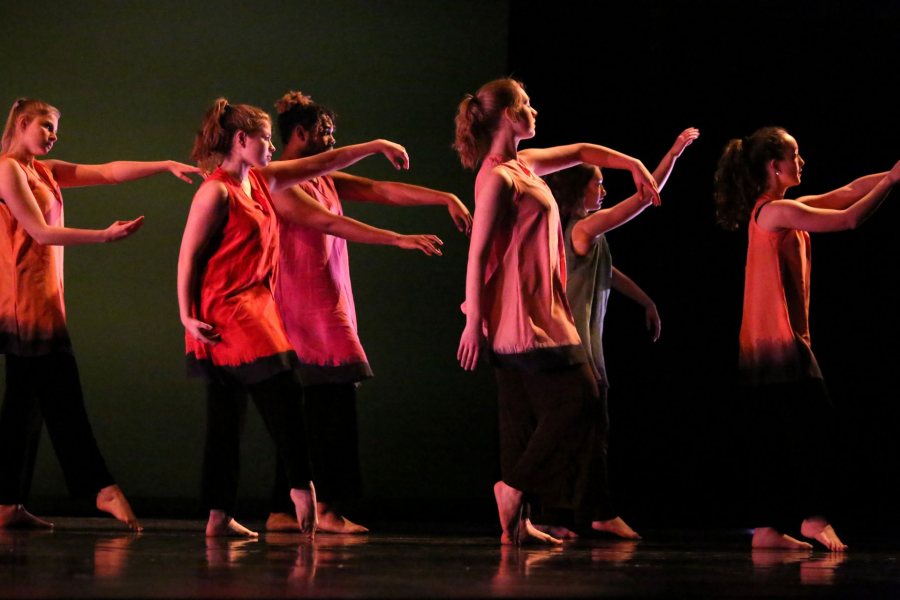 One Saturday afternoon performance was Passing, a piece choreographed as a tribute to Marcy Plavin’s life and legacy. (Samuel Mironko ’21 for Bates College)

Later, they came together to watch each other perform in Schaeffer Theatre. Bonding over cups of chai, the dancers took their seats to watch new work choreographed by students and alumni alike.

Shae Gwydir ’20, Howard, and Flannery Black-Ingersoll ’19 performed “Contact Disco,” a piece they created for their advanced composition class. Using three stools as props, the dancers combined intricate modern technique with theatrical facial expressions to make movement that was both succinct and sporadically comedic. 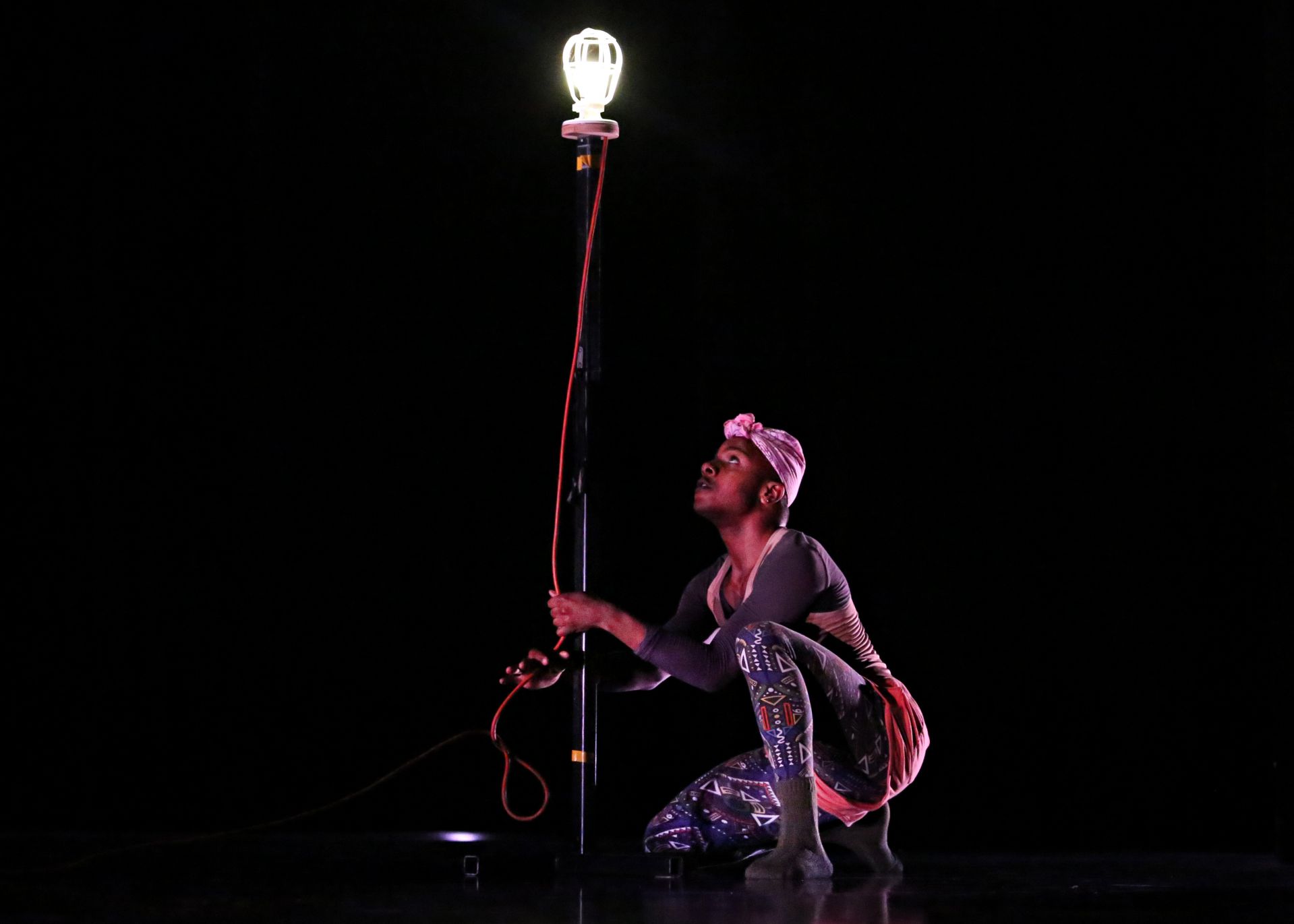 Presenting an improvisatory piece during Saturday afternoon’s performances, Ya-Ya Fairley ’12 used a ghostlight as a prop in the center of the stage, dancing in the small spot of light it cast. (Samuel Mironko ’21 for Bates College)

The alumni pieces included improvisatory choreography by Mason and Fairley. The latter used a ghostlight as a prop in the center of the stage, dancing in the small spot of light it cast. Mason, prompted by Marie Kondo’s idea of “sparking joy,” strategically placed old childhood belongings that gave her joy on the stage, dancing around and with them.

“We continue to make beautiful pieces on this stage.”

The performances concluded on a poignant note with Passing, a piece choreographed as a tribute to Plavin’s life and legacy by Dilley and former Bates faculty member Rachel Boggia. Seventeen Bates dancers moved to music composed by Plavin’s longtime friend and partner in work, Bill Matthews, Alice Swanson Esty Professor of Music.

Passing celebrated the continuum of Bates dance. “We continue to make beautiful pieces on this stage,” said Dilley. “That’s the standard that Marcy set.” 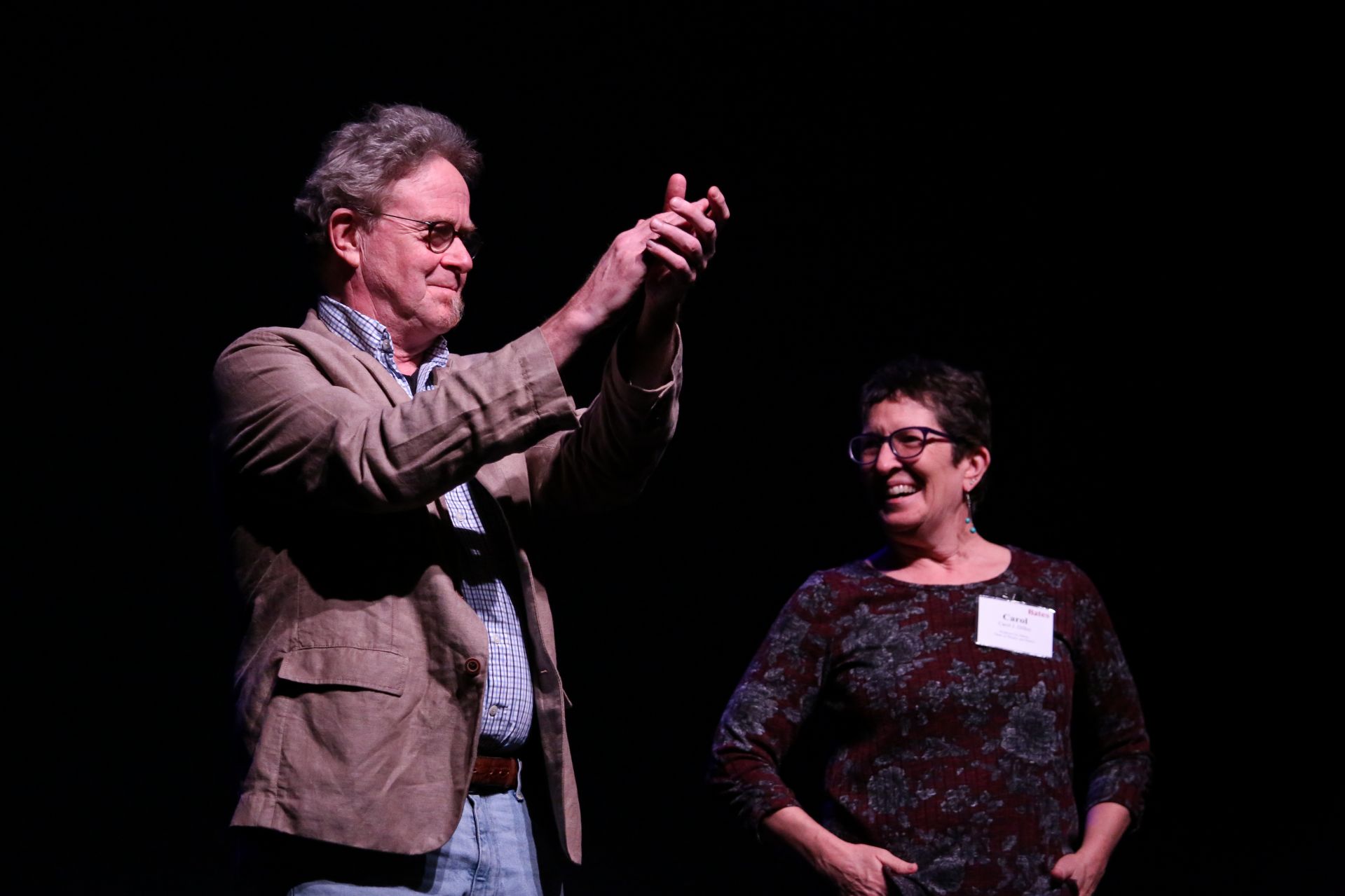 A longtime composer for Bates dance, Alice Swanson Esty Professor of Music Bill Matthews (left) is shown with Carol Dilley prior to the April 27 performance of Passing, presented in memory of Marcy Plavin.
(Samuel Mironko ’21 for Bates College)