It’s bright and early, and Geoff Swift, Bates’ vice president for finance and administration and treasurer, is putting out some of the thousands of programs that will guide graduates, family, and friends through the Commencement ceremony. 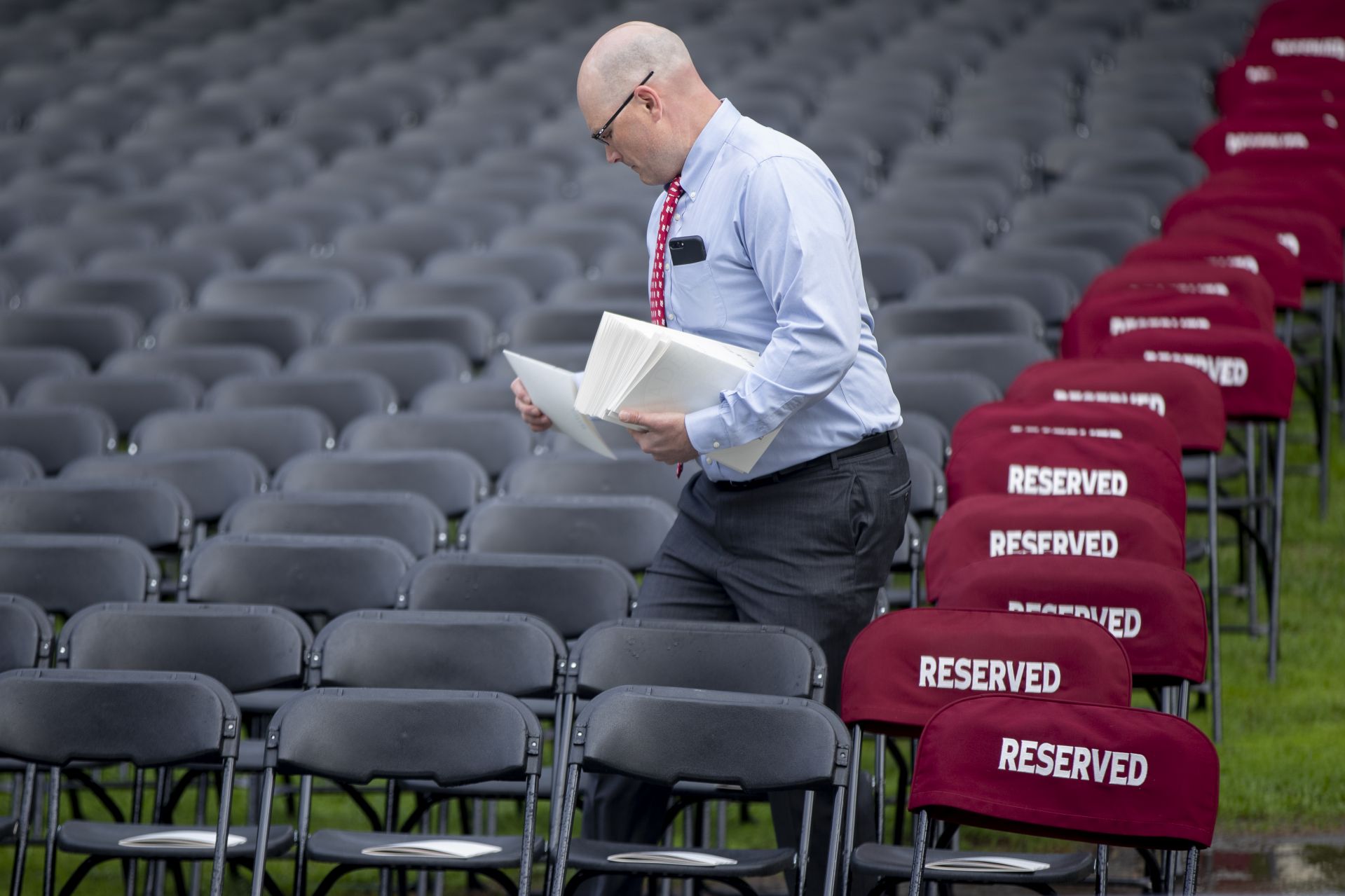 One of the most visible parts of Commencement pageantry is the seal of the college, shown being hoisted by a Genie load lifter onto the facade of Coram Library. 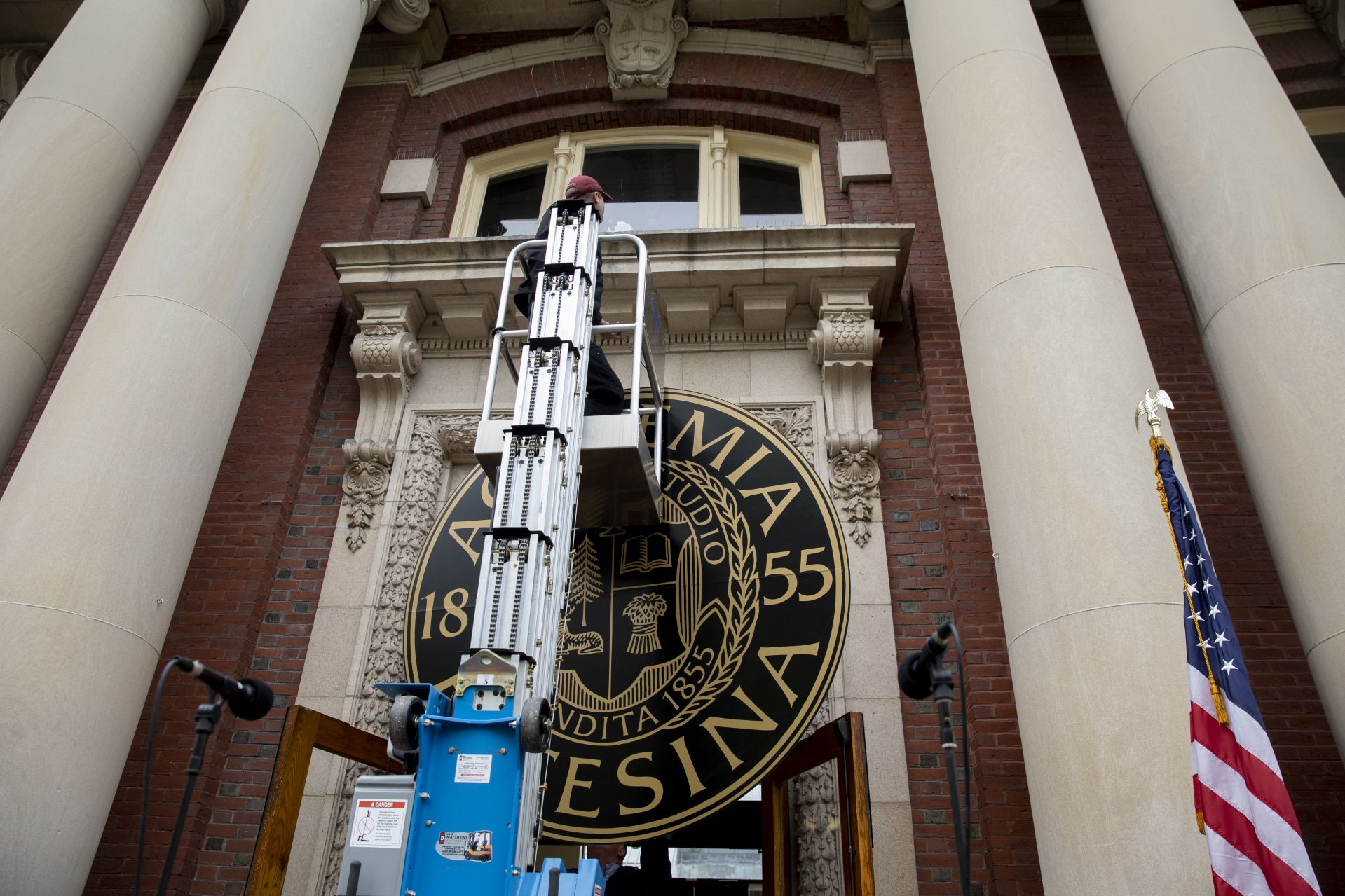 Facility Services staff bring the diplomas to the stage in front of Coram Library. Registrar Mary Meserve (right) will go through them to make sure, one last time, that everything is in order. 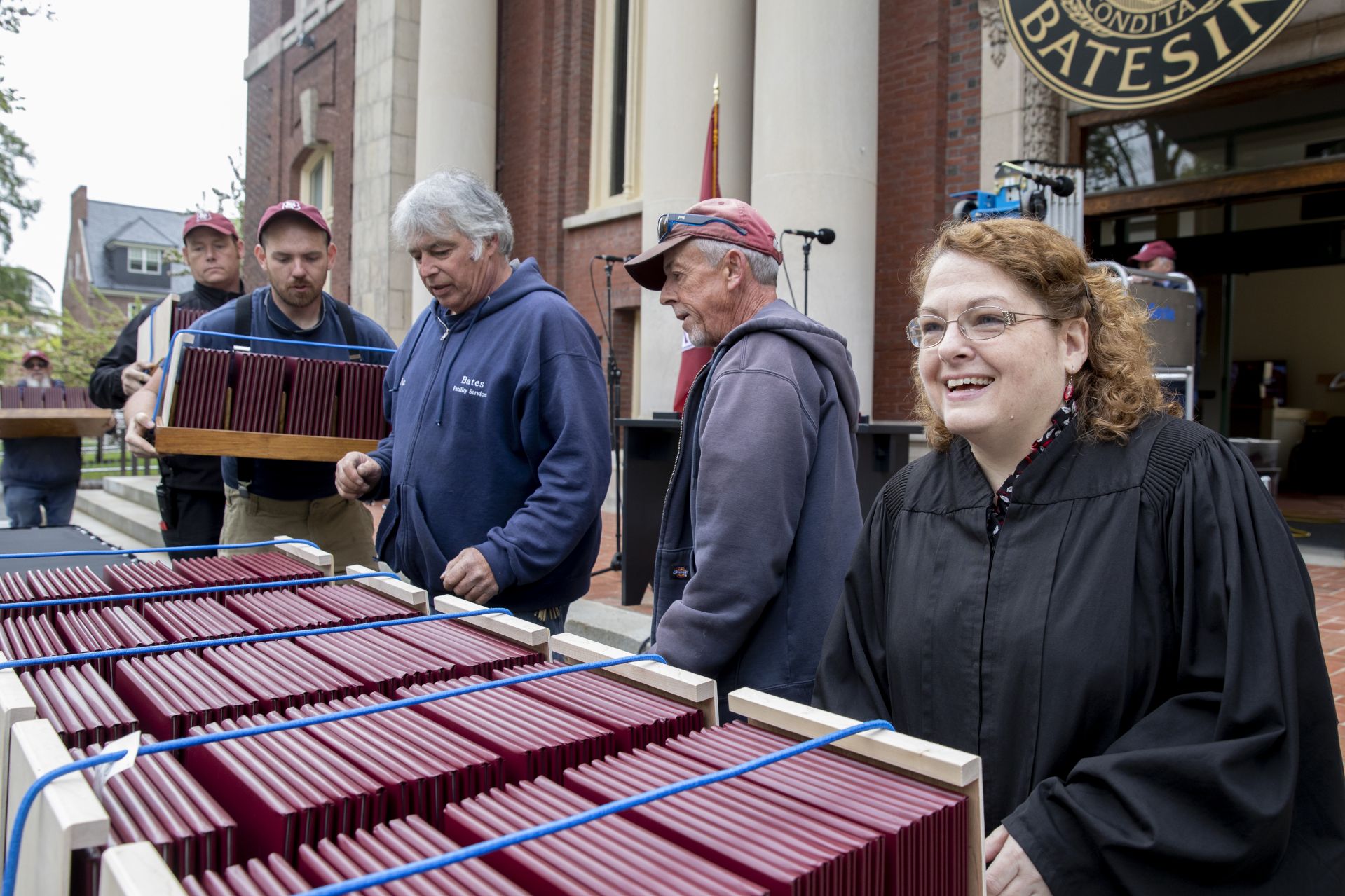 Decorating one’s mortarboard is a growing and poignant trend at Bates. Here, Lauren Drumgold of New York City displays hers: ”She turned her cants into cans and her dreams into a plan.” 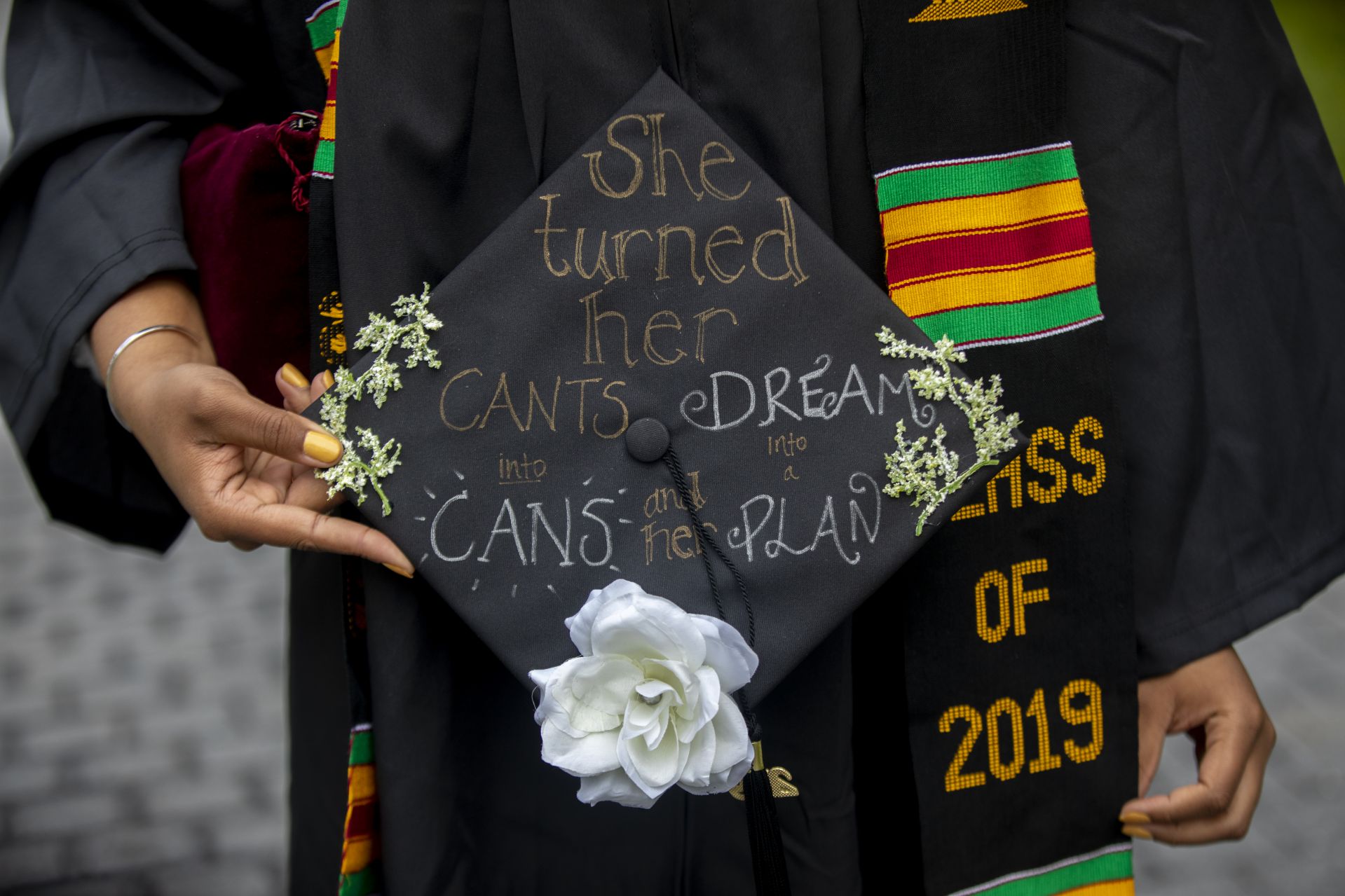 Many of the graduating seniors have been up all night. First there was Midnight Madness, a giant party on the Ladd Plaza, then a 2 a.m. senior breakfast in Commons, then the traditional final hike up Mount David — and, through it all, the mad dash to tie up loose ends and say goodbye to old friends. 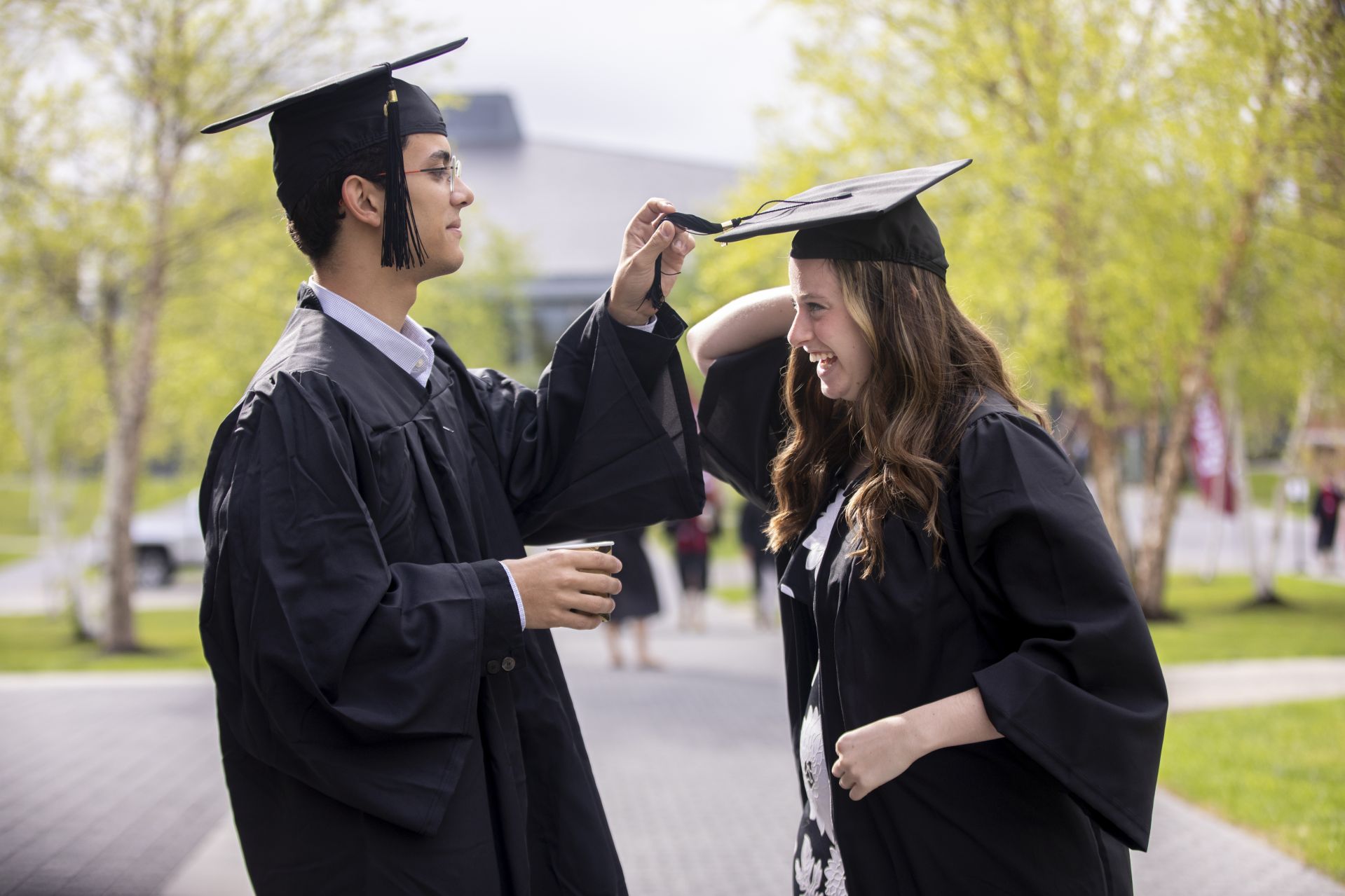 Now there’s a moment of calm as the graduates wend their way out of Commons or dorms and begin to line up on Alumni Walk. The procession into the Commencement ceremony doesn’t begin until 9:30, so Daniel Fichmann of New York City can take his time helping Arianna Faro ’19 of Lincolnshire, Ill., adjust her tassel.

While the graduating seniors are lining up on Alumni Walk, faculty, senior college officials, and honorary degree recipients don their Commencement regalia in Pettengill Hall.

Shown having a quick word with Bates President Clayton Spencer, Charles Franklin Phillips Professor of Economics Michael Murray has a special role to play. As the most senior member of the faculty, he is the mace bearer, leading the procession into the ceremony. 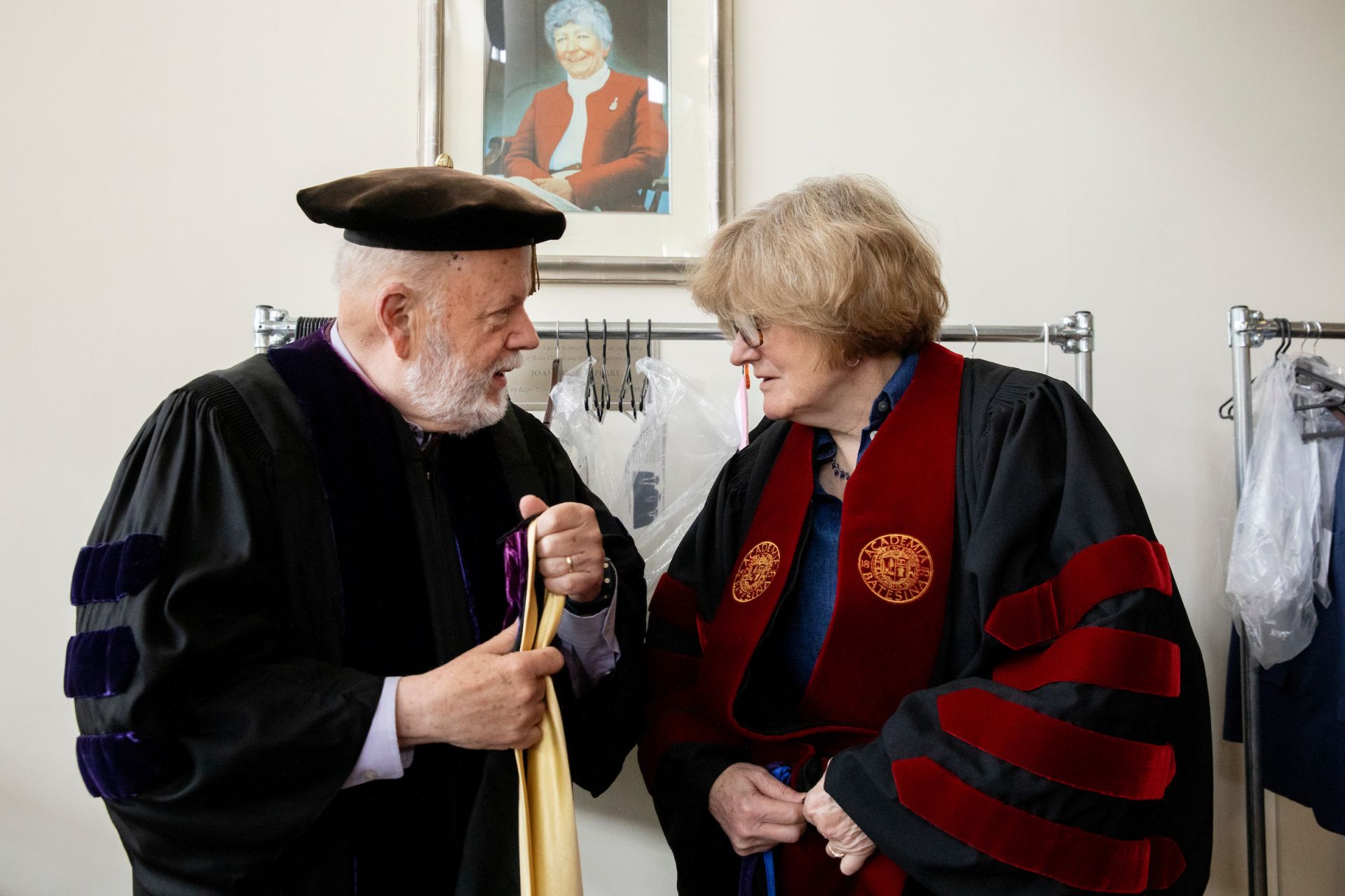 A medieval symbol of power and authority, the Bates mace was a gift to the college from the Class of 1904. Its decorations and engravings indicate such information as the past presidents of the college, the major academic divisions, and the number of states in the Union.

By the time of the procession, the graduates are supposed to be lined up in alphabetical order, but most can’t help darting a few places up and down the line to see friends and take pictures. 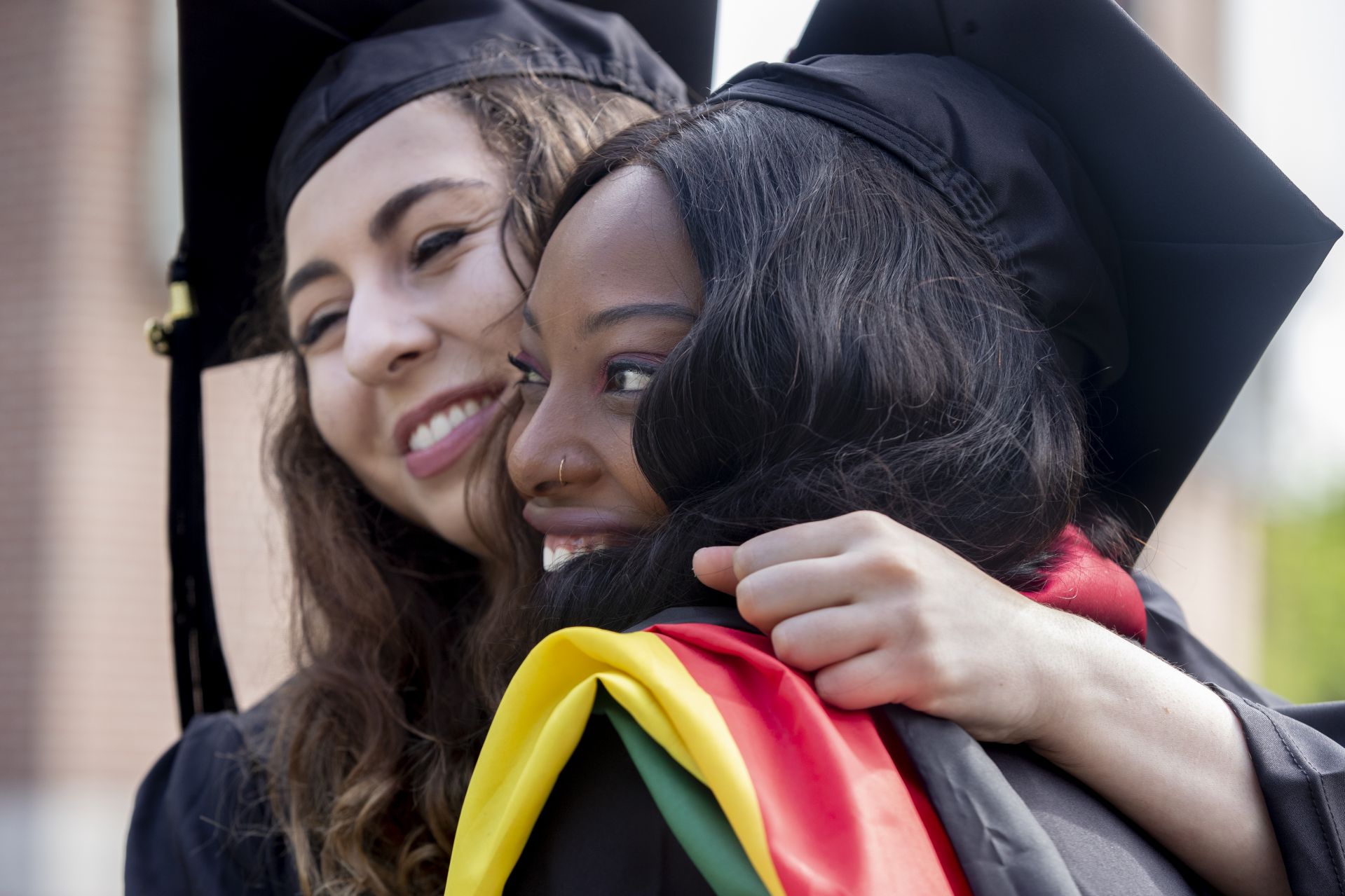 The lines of graduates on both sides of Alumni Walk create a kind of tunnel for passing families, faculty and staff, and fellow students — a great opportunity to get some candid and not-so-candid photos. 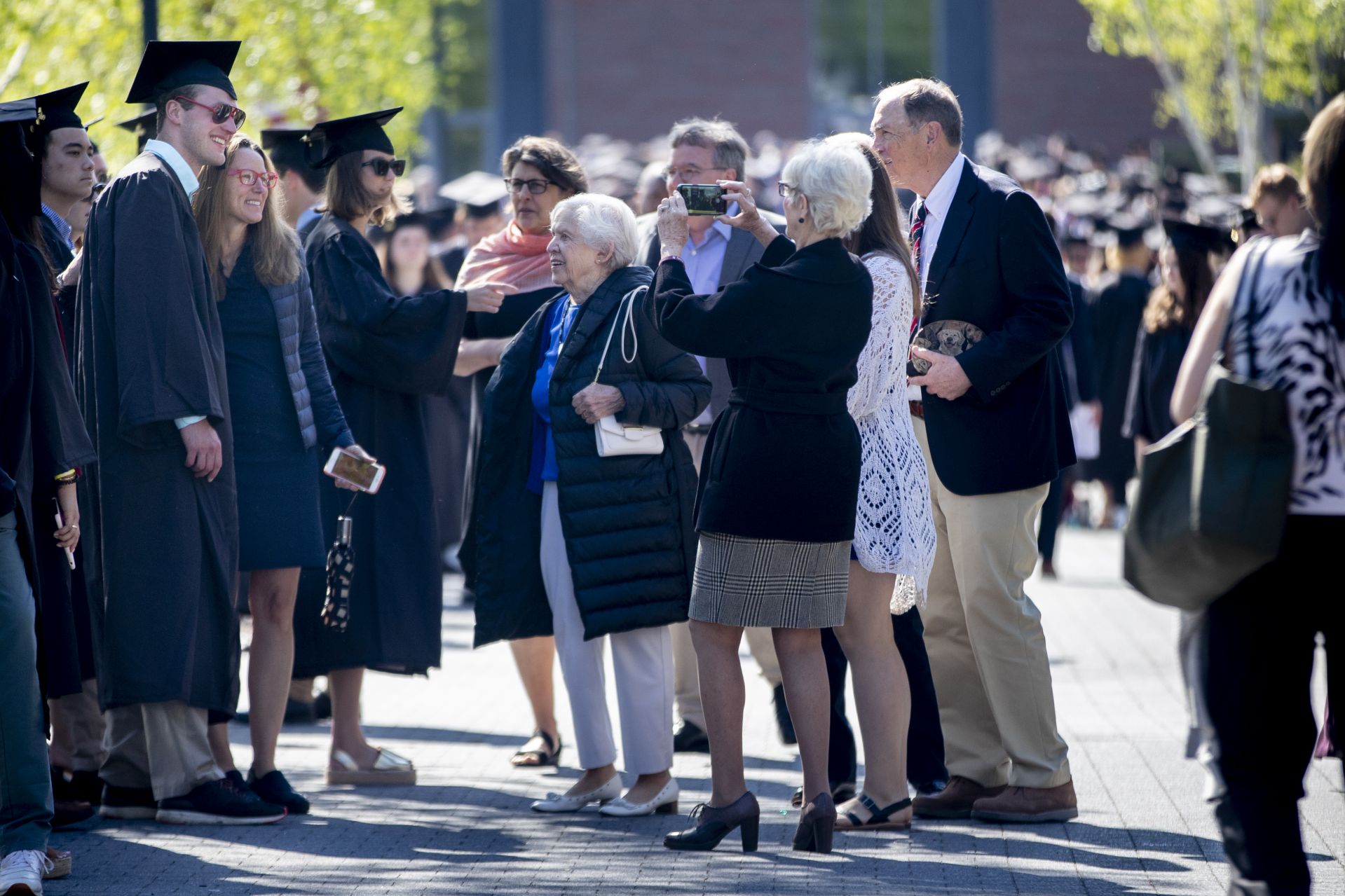 Associate Dean of Students for International Student Programs James Reese stands on Alumni Walk, helping to move the line forward as well as greeting and congratulating the students who go by. 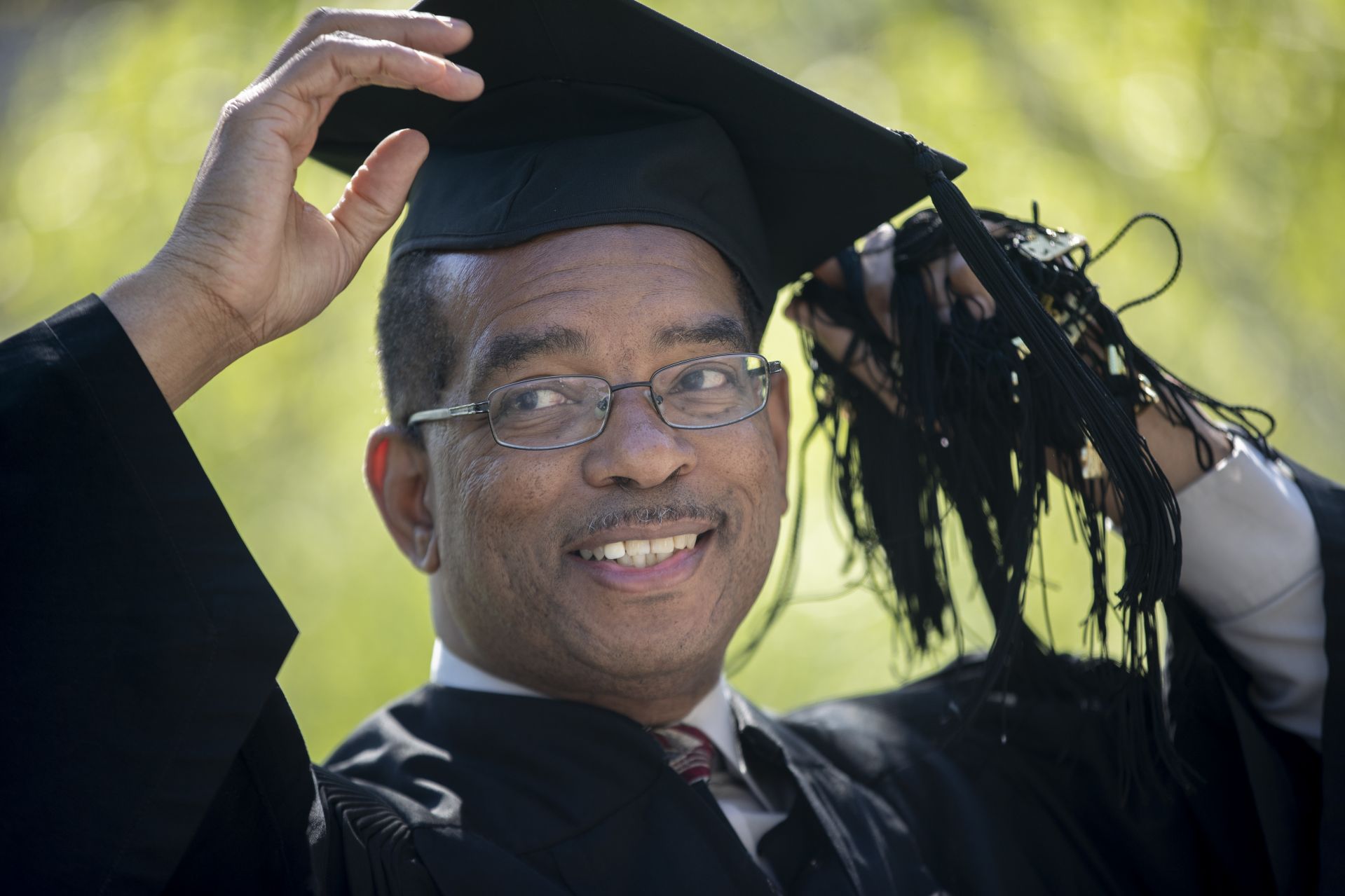 As the procession begins, junior class marshal Maya Seshan of Wilton, Conn., leads the Class of 2019 onto the Historic Quad. Elected by her classmates and destined to step up as senior marshal next year, Seshan is joined by fellow junior marshal Jin Wei. 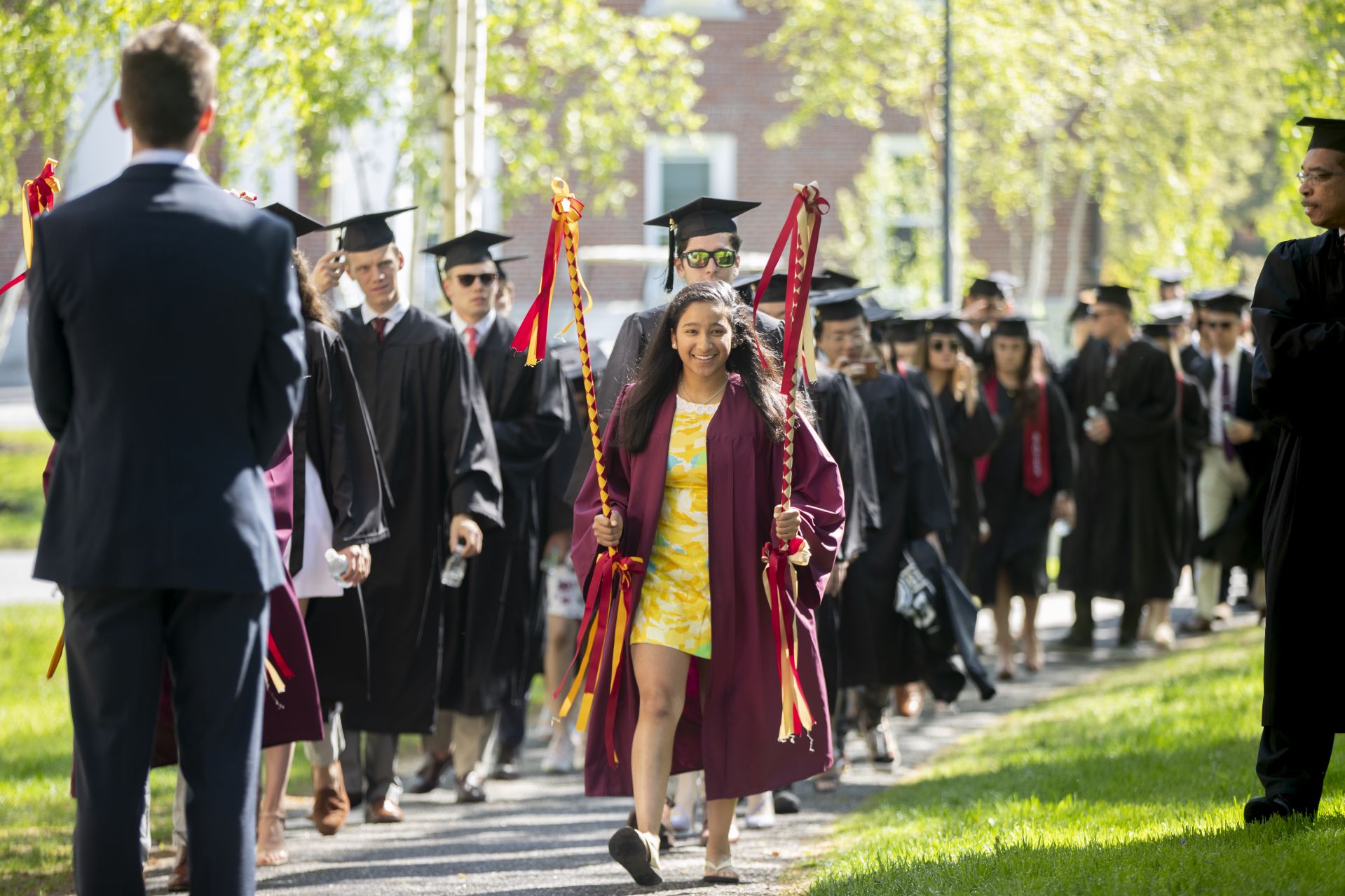 The graduates have actually lined up from Z (Zupancic) to A (Abbott). Once they’ve wrapped around the Historic Quad, faculty and administrators come through the student line, which then folds in on itself, now walking A to Z, to follow the faculty.

Near the head of the procession to the Coram Library Terrace, Bates President Clayton Spencer greets the graduates. 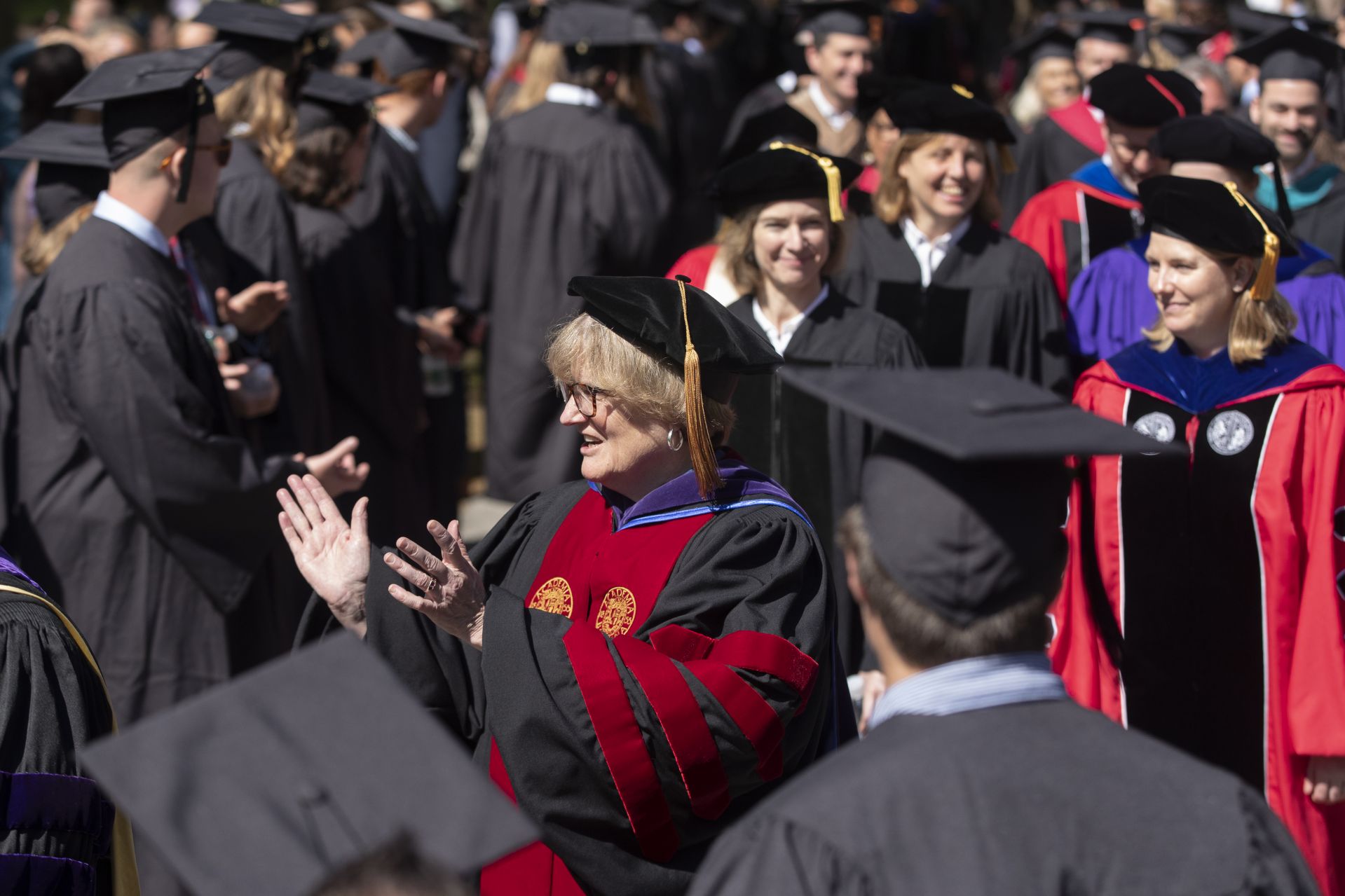 Piper Tom Ryan on the steps of Hathorn plays during the processional on Alumni Walk where students have lined up. 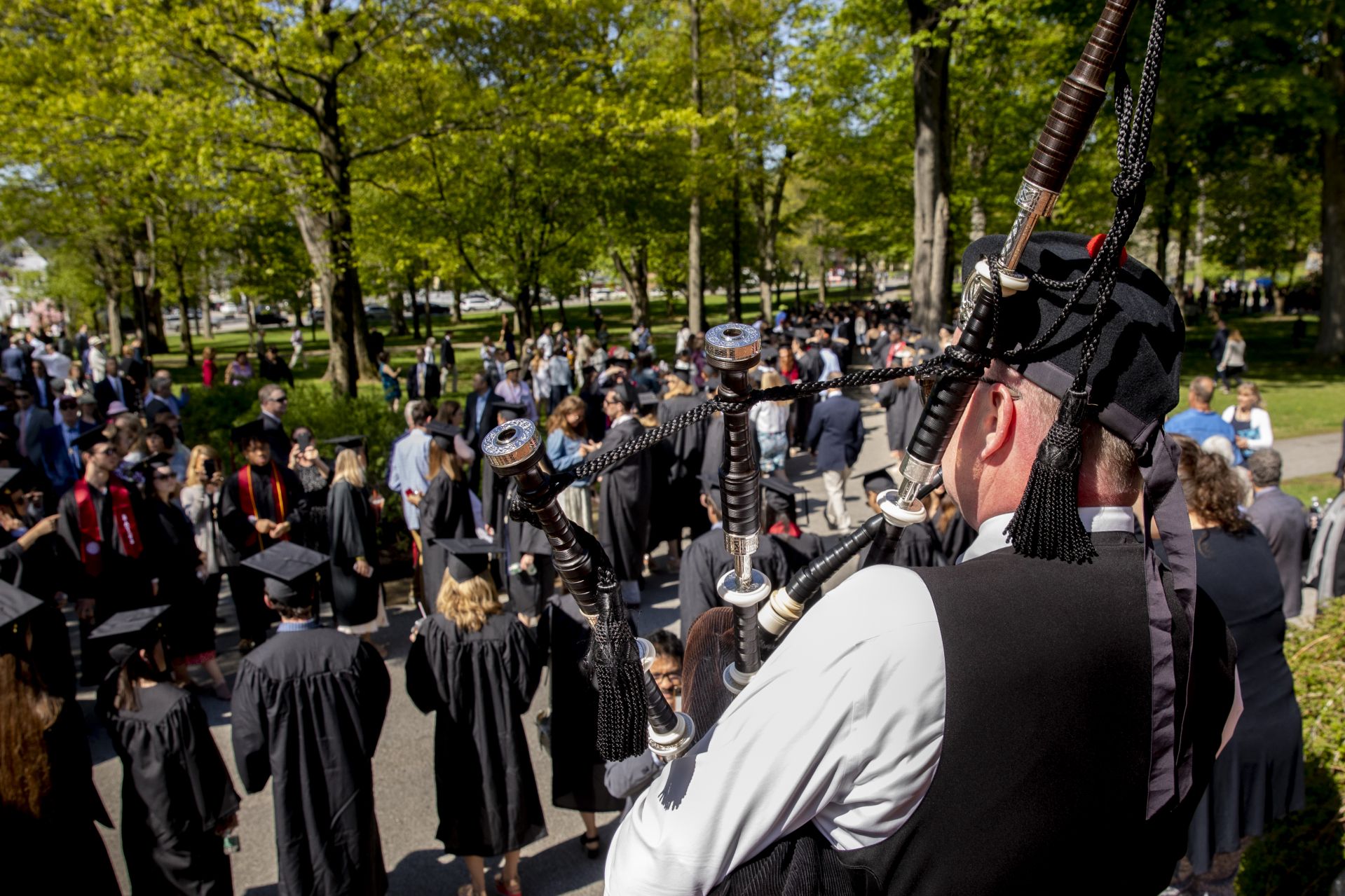 As the graduates process in, extended family from around the country and the world take their seats on chairs that extend from Coram Library Terrace halfway across the Quad. 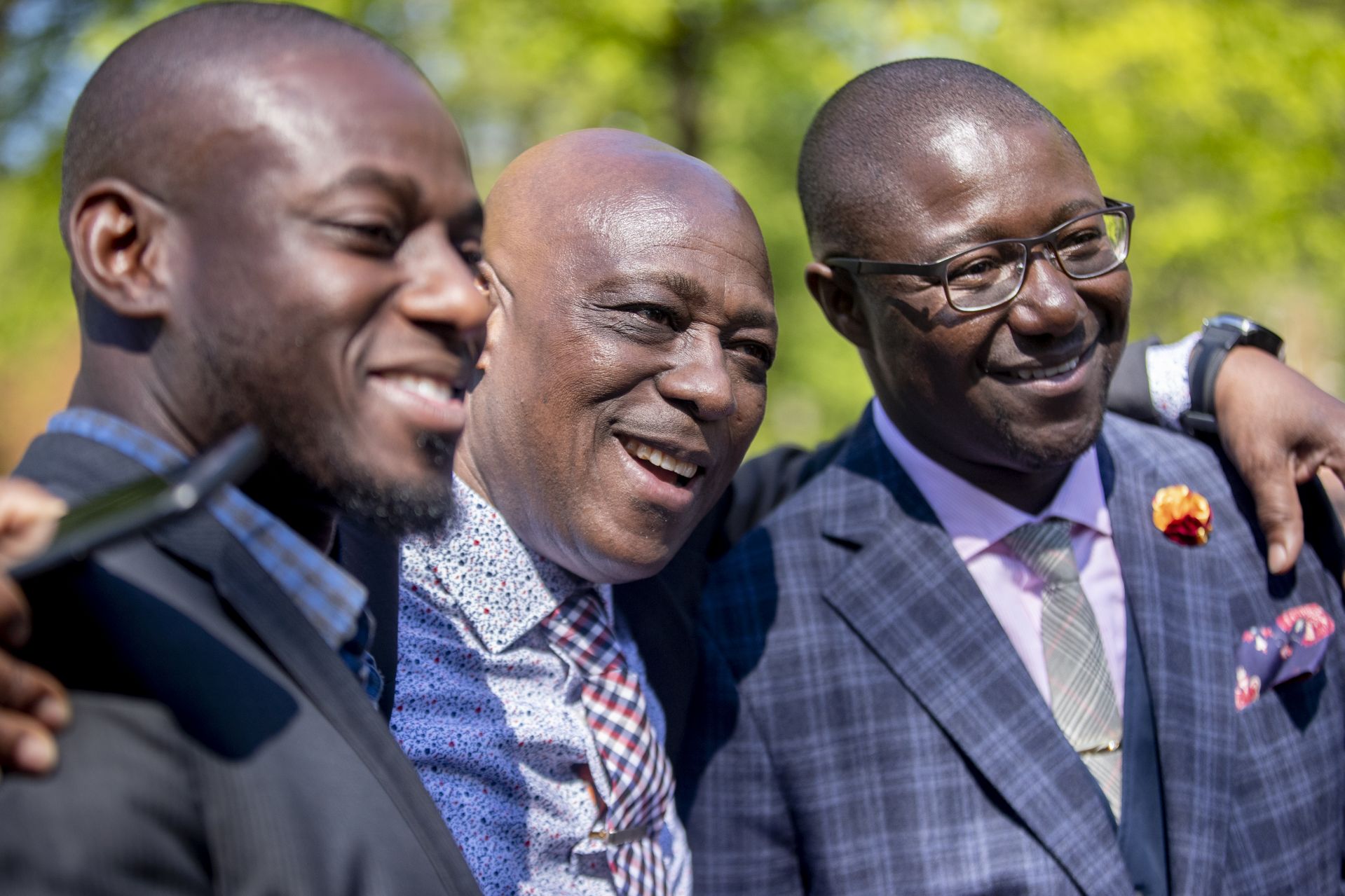 President Clayton Spencer has welcomed the graduates and their families, and senior speaker Claire Naughton ’19 has urged her classmates to don their wings and leap into the future. Now, it’s time to confer honorary degrees. 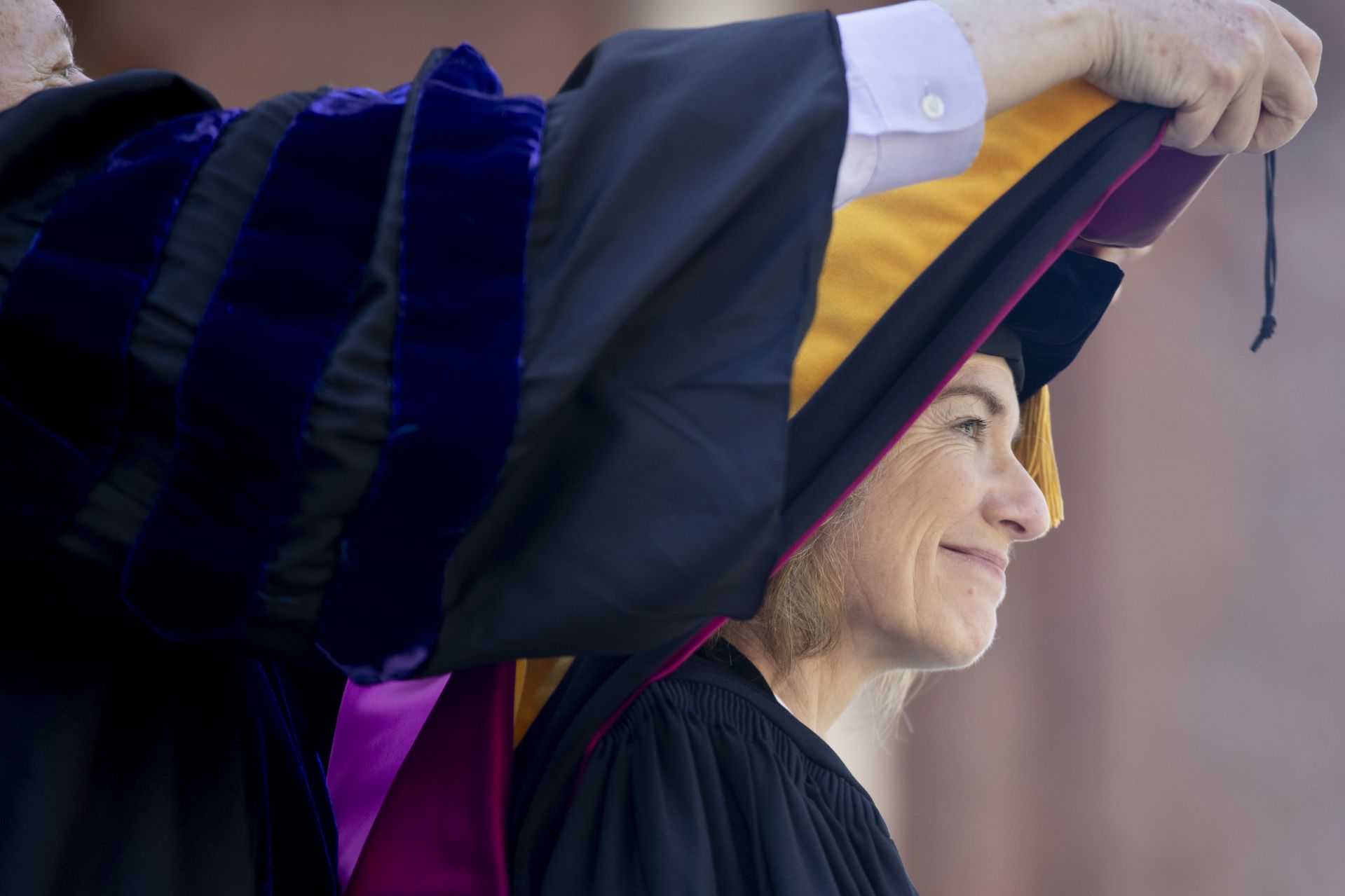 The first two honorands were Travis Mills,  a Maine resident and Army veteran who became a quadruple amputee in combat and is now an advocate for combat-injured veterans; and Megan Smith, CEO of shift7 and a former Google executive and U.S. chief technology officer who is a visionary for tech innovation, collaboration, education, and inclusivity.

Four hundred sixty-nine members of the Class of 2019 received degrees on May 26. Thirty-six states and 36 countries were represented, and 10 percent of the graduates were the first in their families to go to college. 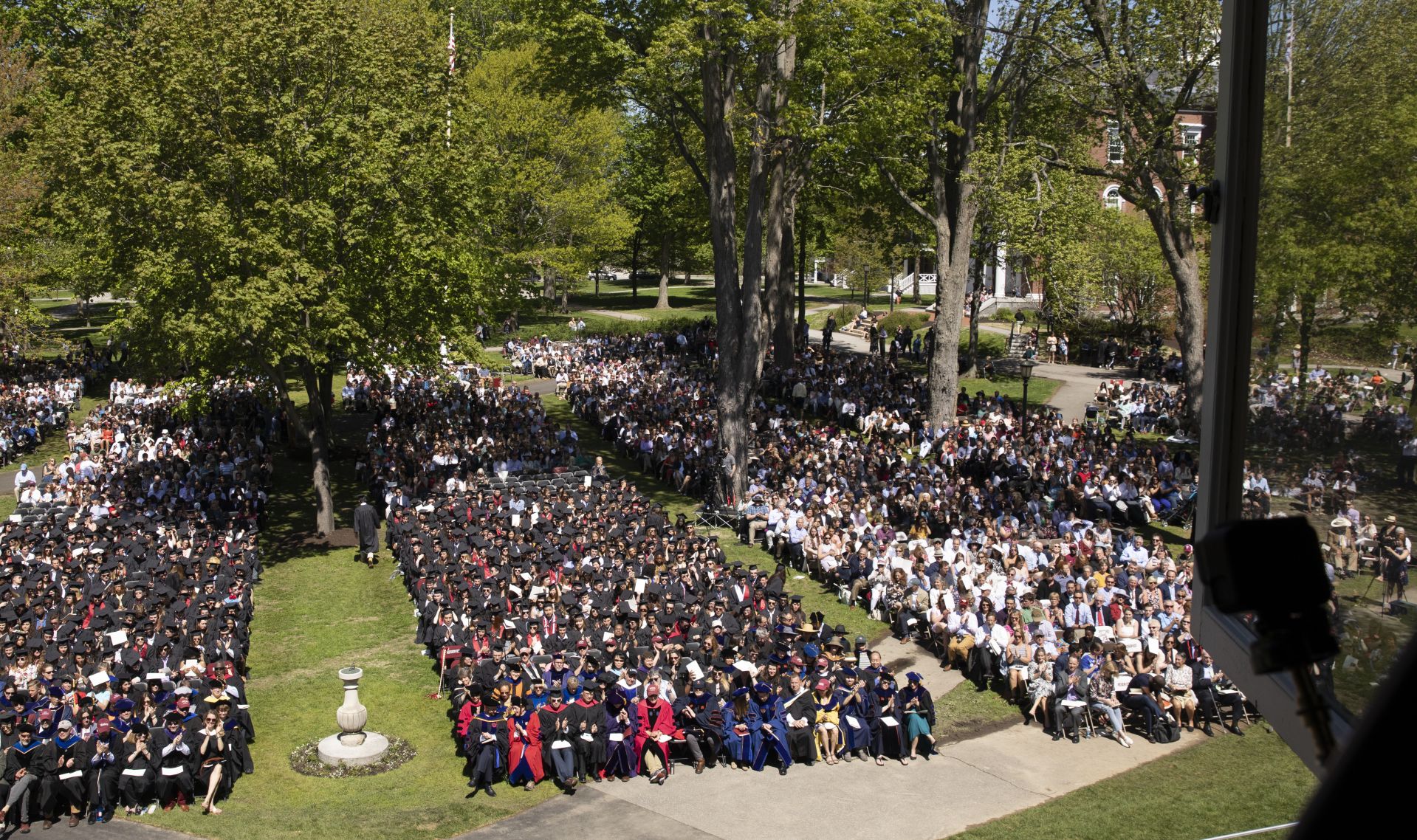 Two-thirds studied abroad during their time at Bates, 94 double-majored, one triple-majored (see below), and 41 received departmental honors for their senior theses. Forty percent played a varsity sport, and 20 won Fulbright awards. They took 232 community-engaged learning courses.

“What I am most proud of, beyond these impressive facts and figures, are the human qualities you embody,” Bates President Clayton Spencer said in her welcome. “Your adventurous spirits, your creativity, your generosity, and your drive for justice. Most of all, I love your joy in, and caring for, one another.”

Rohan Bhat of Mumbai, a double major in philosophy and in classical and medieval studies, accepts his diploma from President Clayton Spencer. 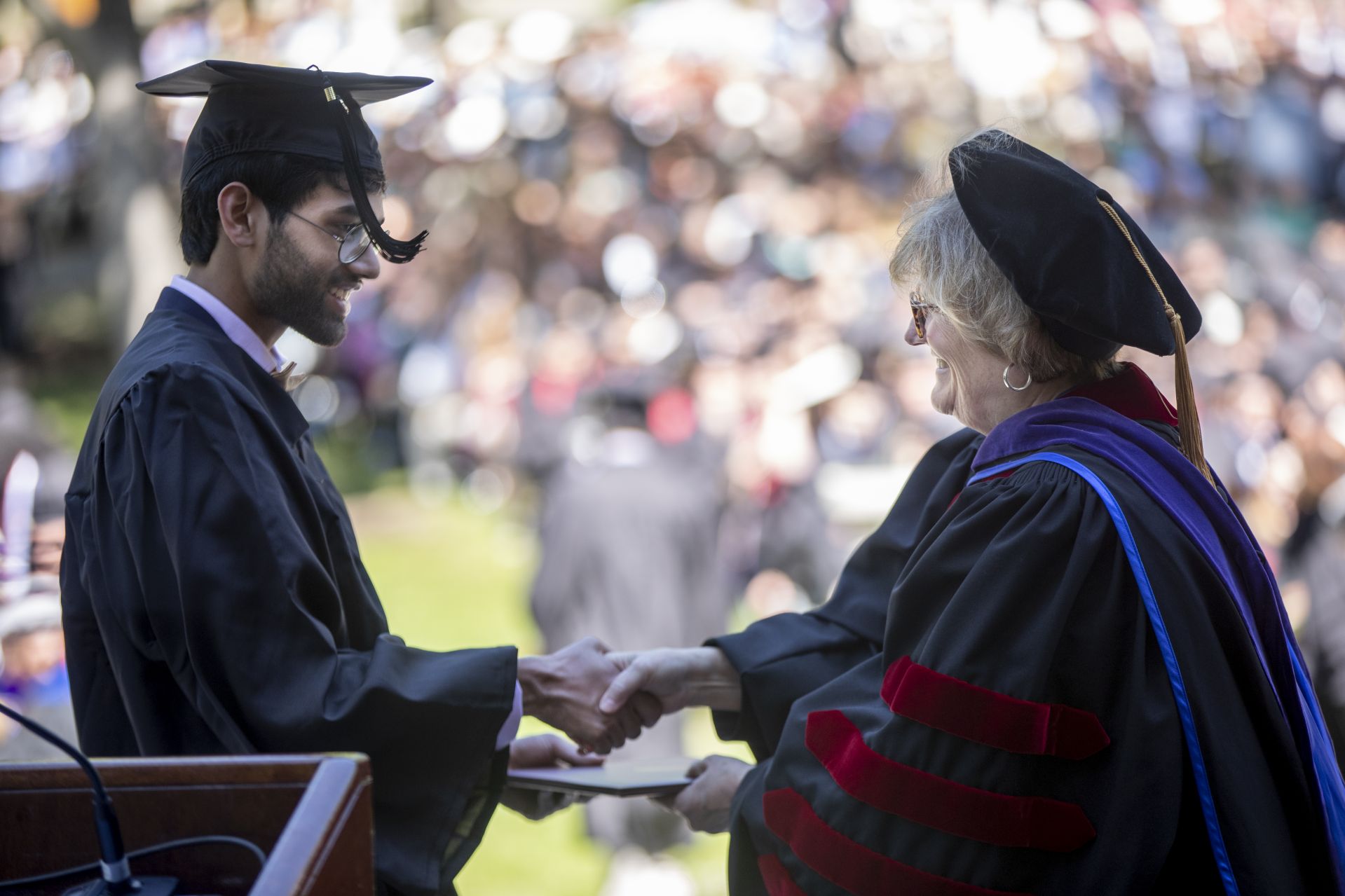 Joseph Frake of St. Petersburg, Fla., who majored in politics, walks back to his seat after receiving his diploma. 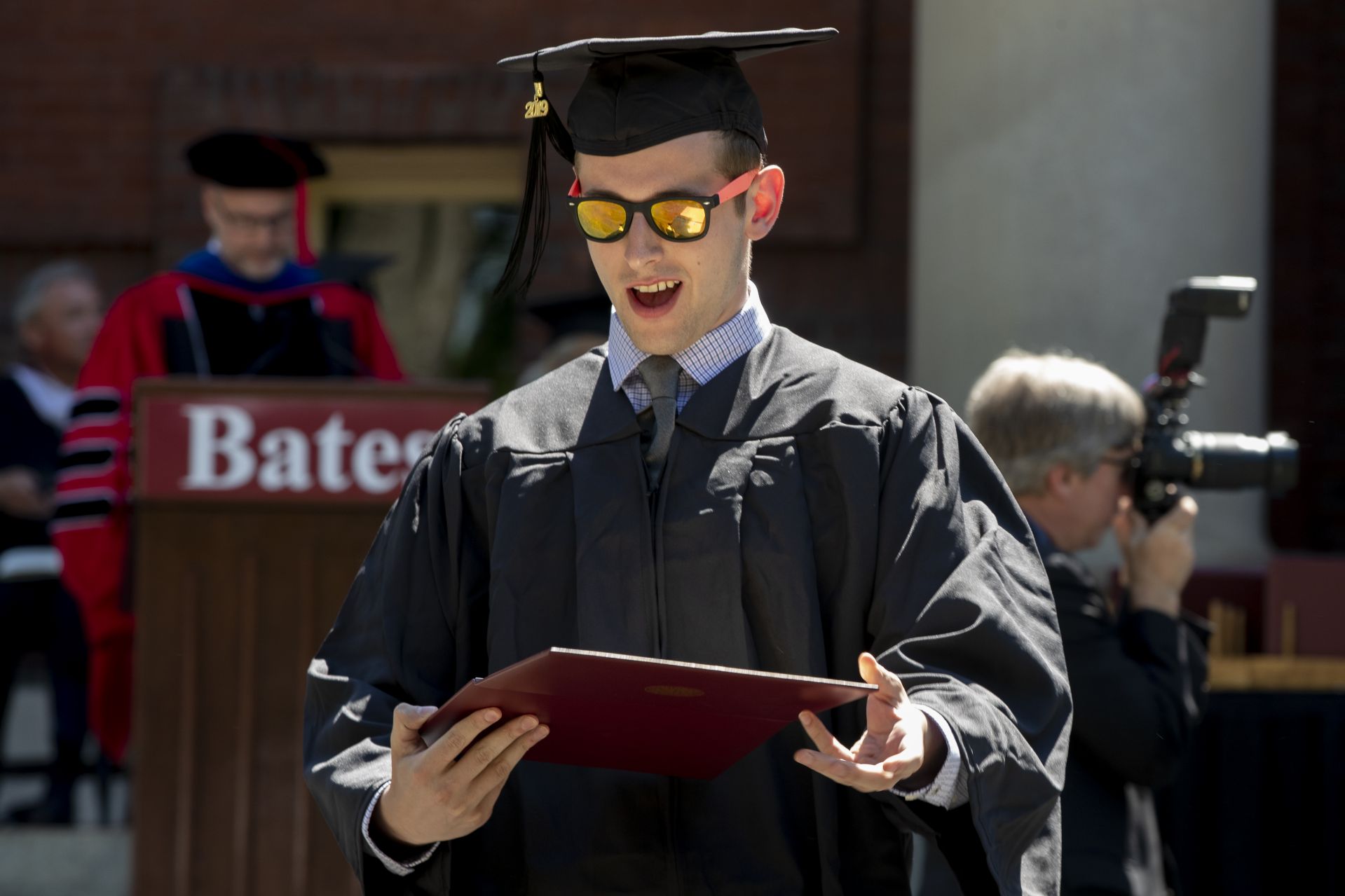 Faculty marshals Kirk Read, professor of French and francophone studies; and Georgia Nigro, professor of psychology, help get the next set of diplomas ready to hand out.

The honor of faculty marshal — and the job of leading the procession of faculty and helping distribute diplomas — “is bestowed on a senior faculty member who has an admiration and respect for the official ceremonies of the college, including commencements, convocations, presidential inaugurations, and any other events that call for an academic procession.”

This is Read’s first turn as a faculty marshal; he stepped in for a colleague who couldn’t make it. 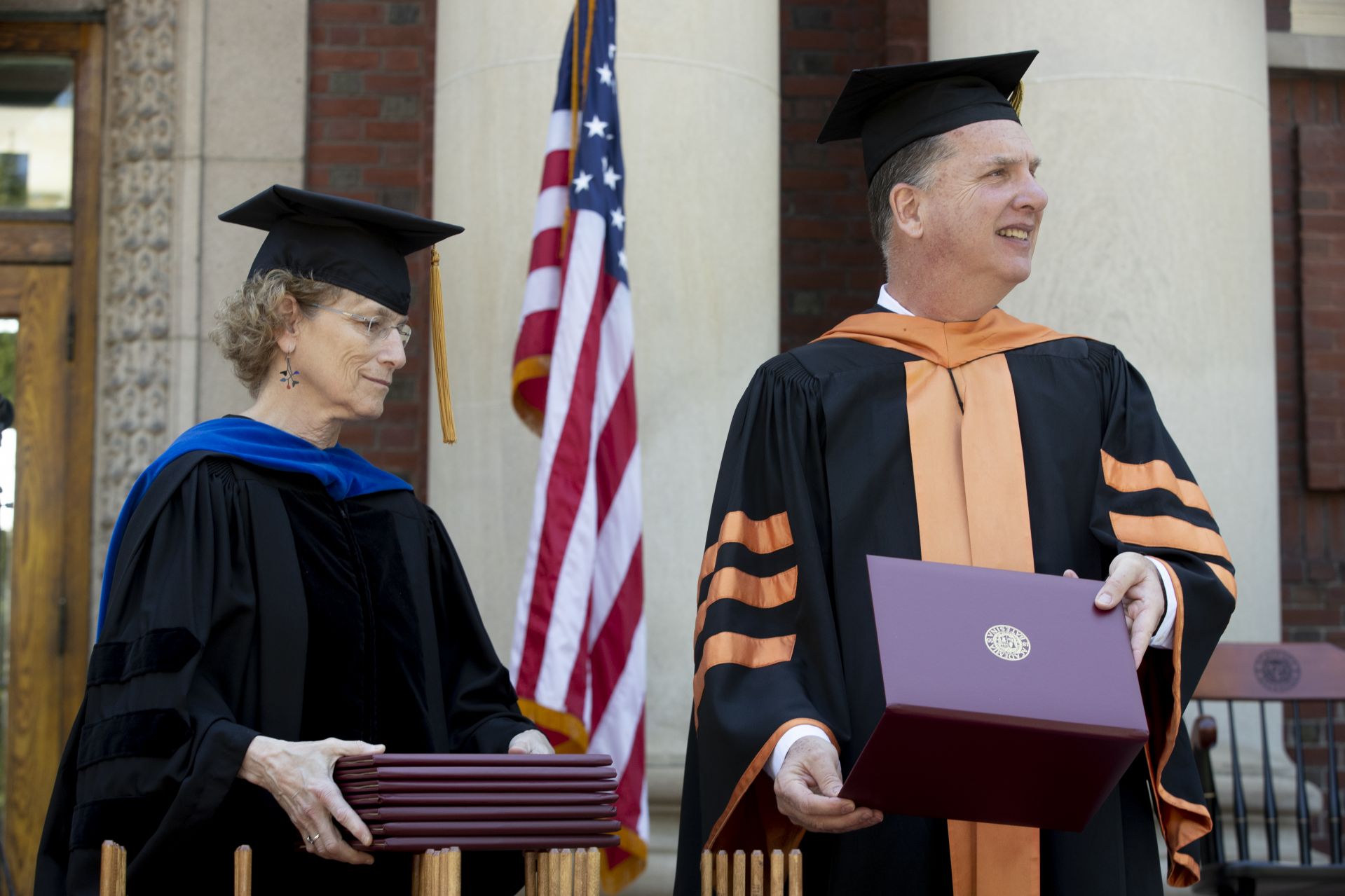 Read says he knew about leading the procession but “never paid attention to the diploma part. The craziness of making sure the name called was the name on the diploma that Georgia passed me did get to feel a bit like a Lucy episode as the names kept coming, the diplomas circulating, and Clayton’s urgent, expecting hand reaching back hopefully.

“Georgia was the perfect calm in the storm.”

In triumph, Myles Smith of New York City, who majored in English, holds his diploma aloft. 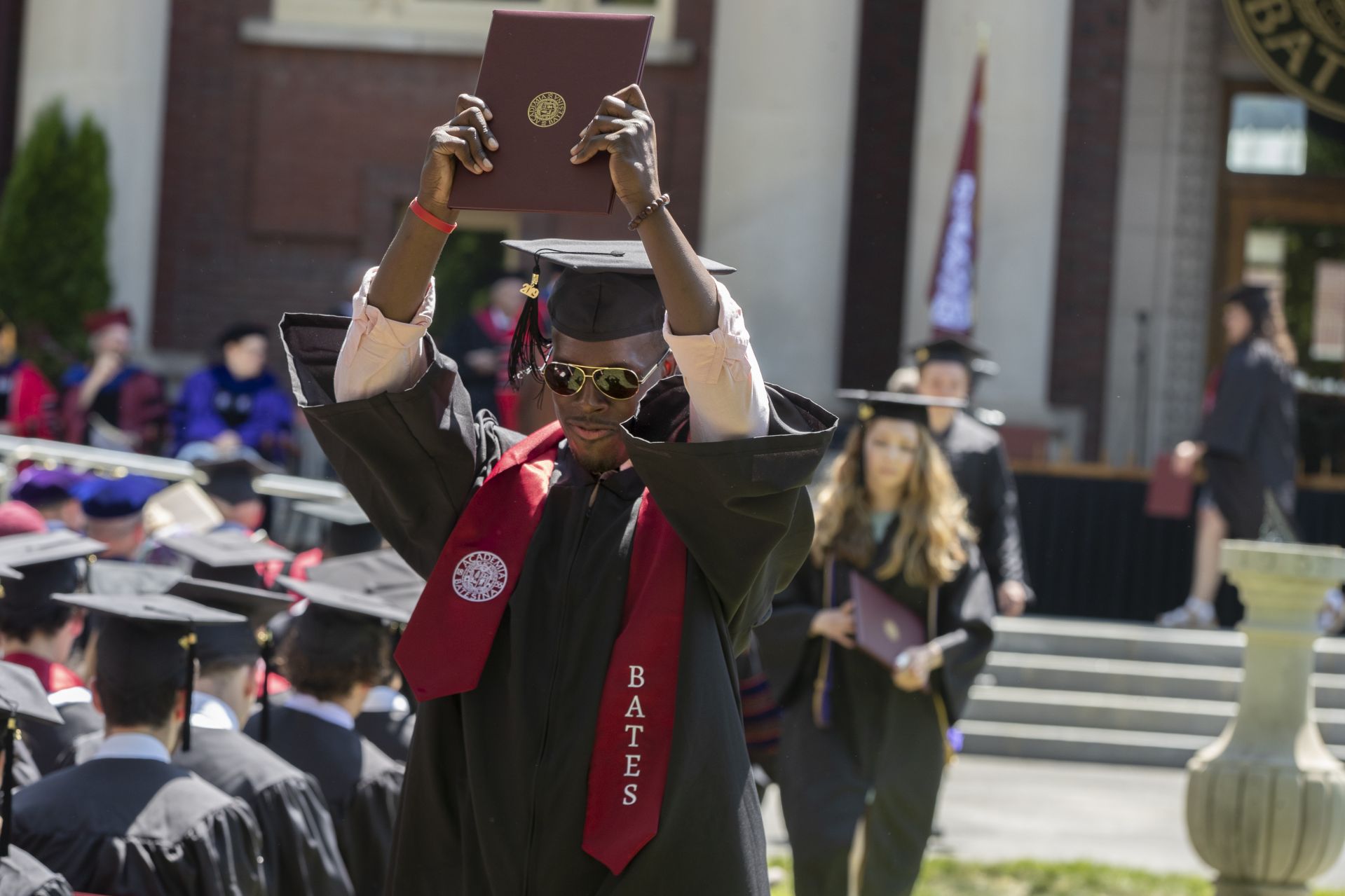 Following giving out diplomas, Spencer tells the graduates to move their tassels from left to right — signifying that they have received a bachelor of arts or a bachelor of science. 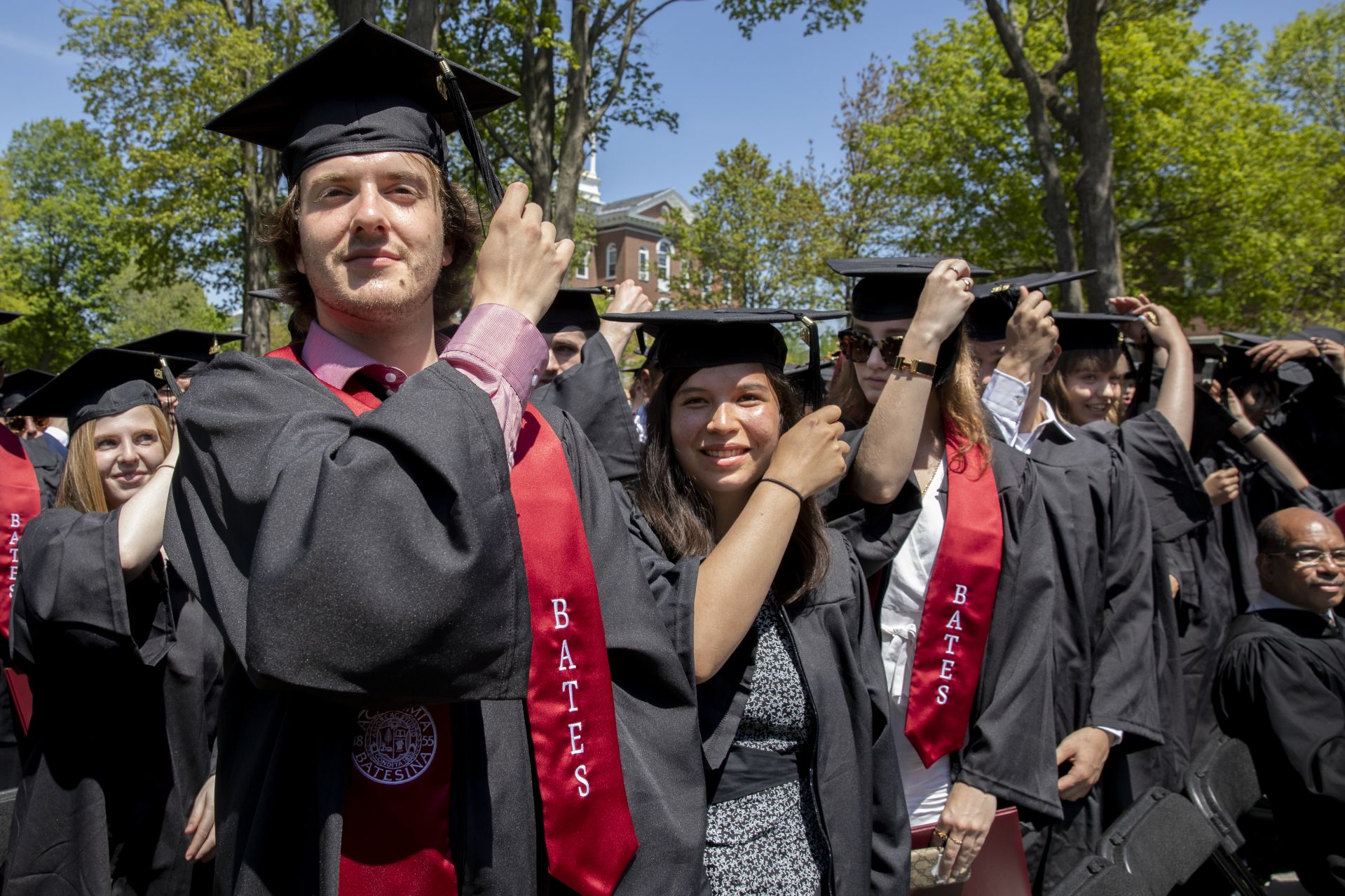 As the Atlantic Clarion Steel Band injects some pep into the recessional, the last set of marshals, the senior marshals, lead the newly graduated seniors away. They are Katharine Gaillard of Boston and Michael Driscal Jr. of Cleveland. 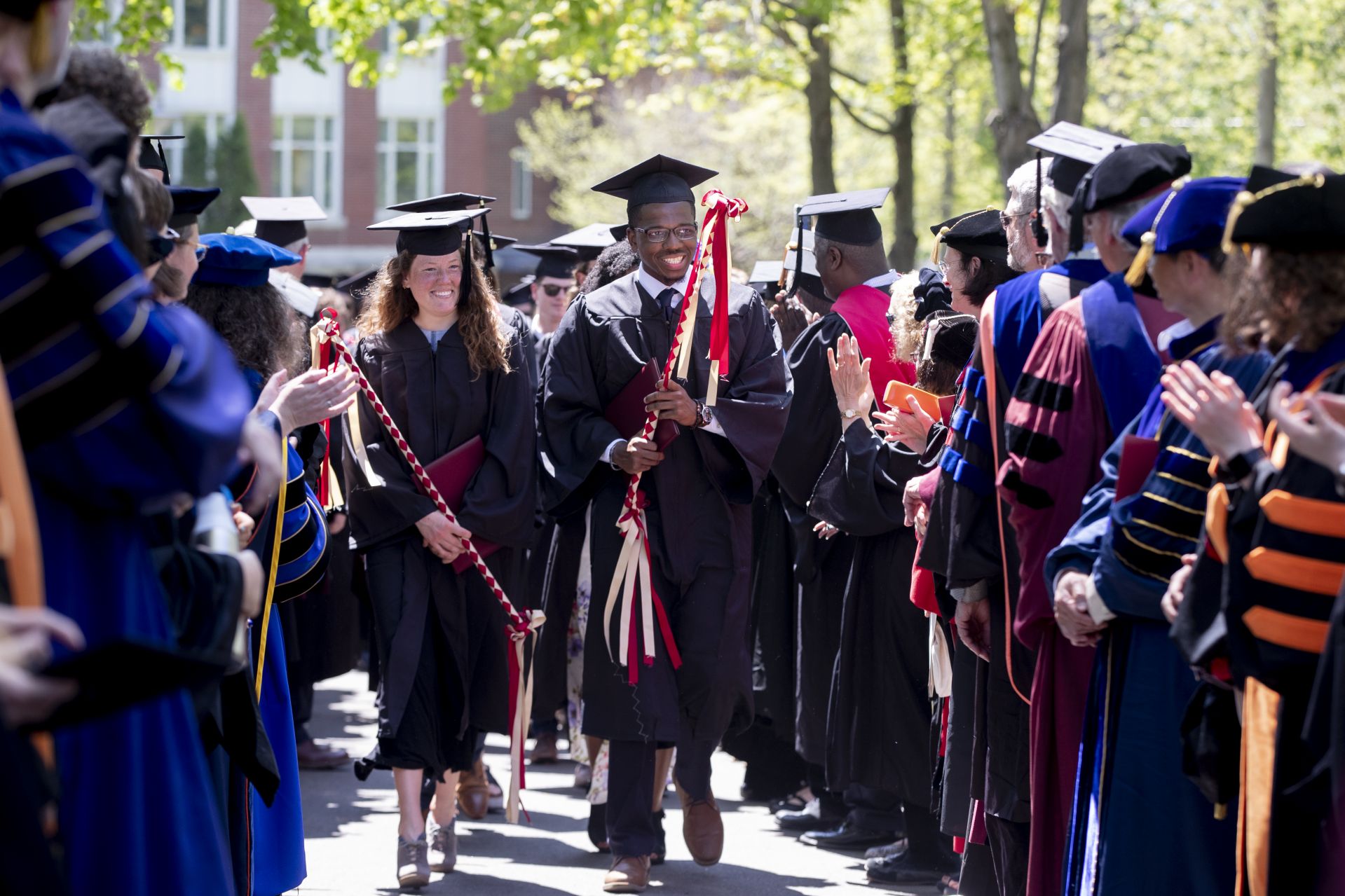 One of the more poignant Commencement traditions is that, when they recess, the graduates pass through two lines of faculty — an opportunity for thank-yous and goodbyes. 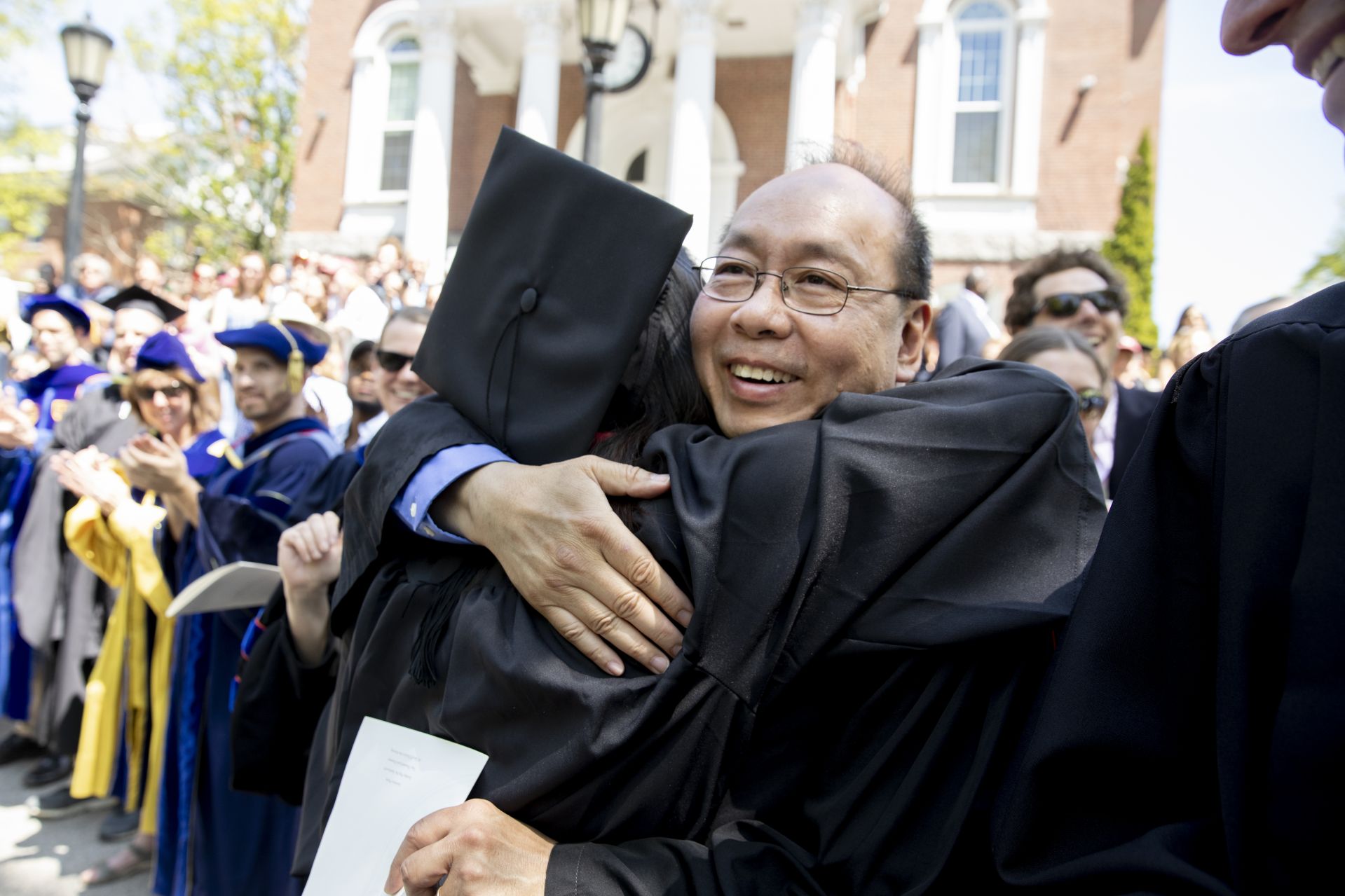 Professor of Mathematics Peter Wong sees a student off with a hug. 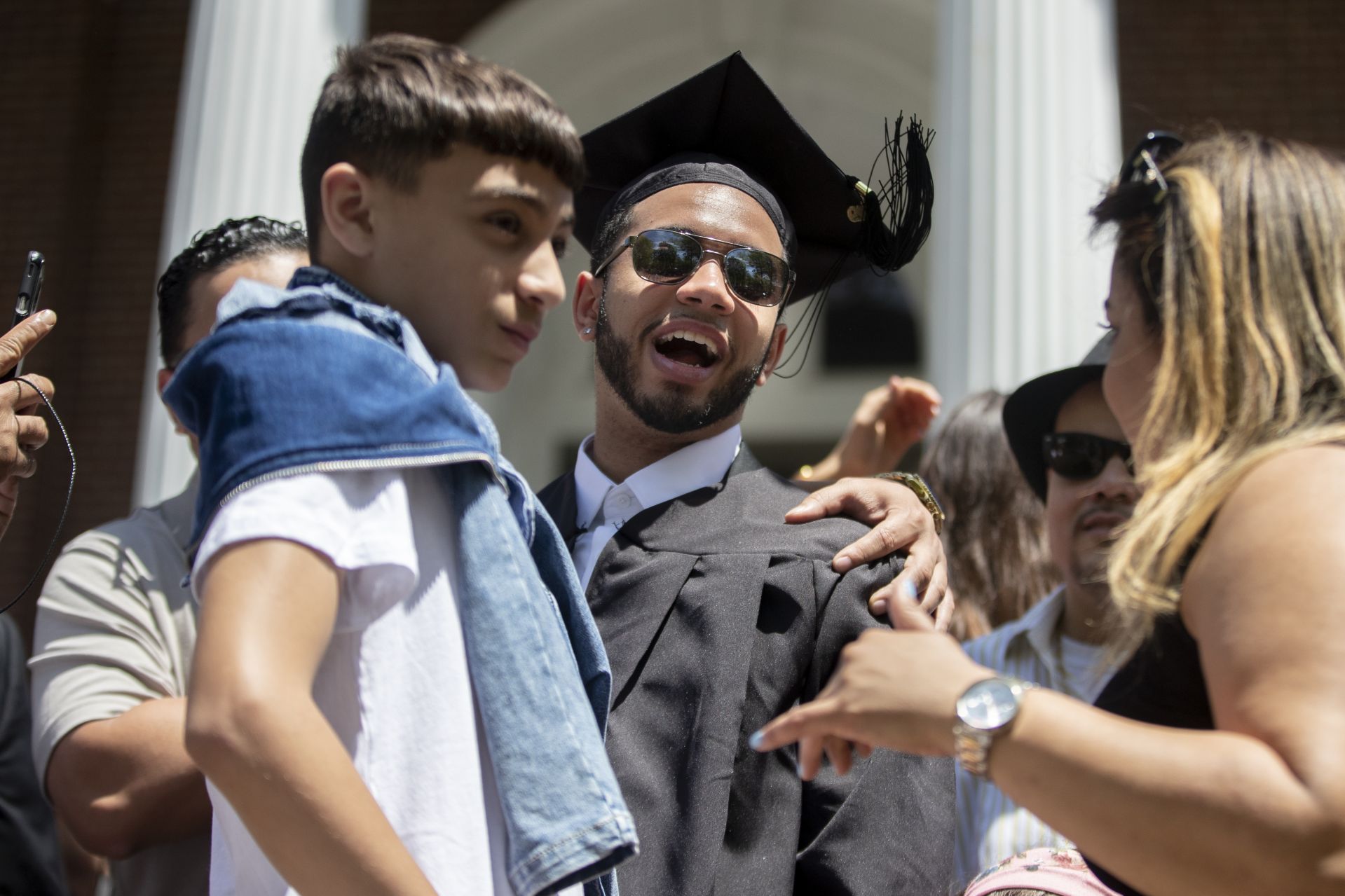 “You are the most important one, the one who made it all come true,” he told his mother.

The one triple major of the Class of 2019, Max Huang of Suzhou, China, is hoisted aloft by three friends from the Class of 2018, Deepsing Syangtan, Maria-Anna Chrysovergi, and Salim Ourari. 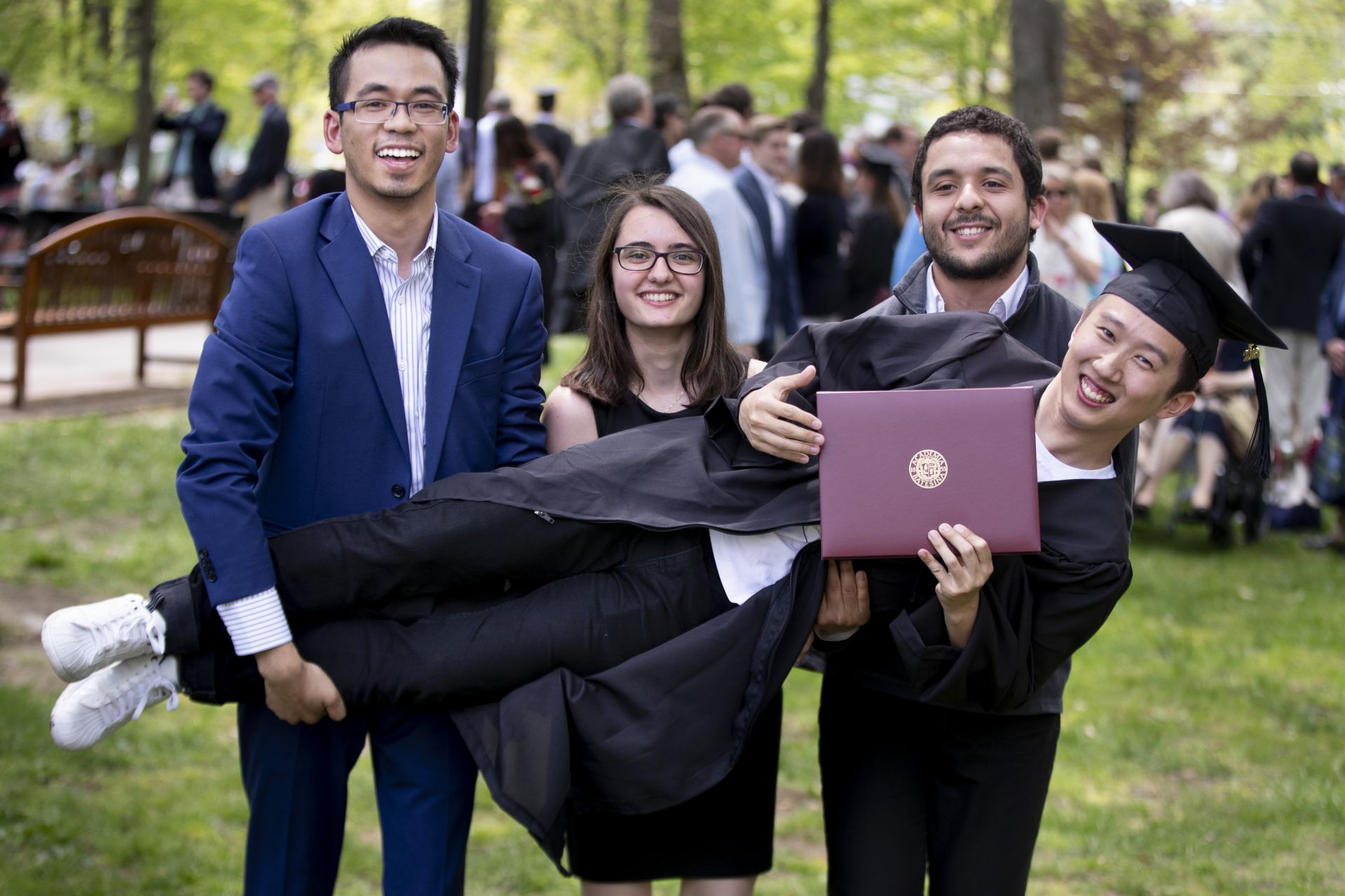