In October 1998, Halsey Platt ’88 was back on campus for Back to Bates Weekend with his wife, Julie Sutherland Platt ’88, and their 21-month-old toddler son, Gordon.

Halsey recalls how he felt that day: “I was so happy to return to Bates, to a place I love, and share Julie’s and my joy, manifested in Gordon, with people that I love.”

Twenty-one years later, Gordon is now also Bates graduate, along with his fellow 468 classmates of the Class of 2019, all of whom received their diplomas last Sunday.

And last Saturday, on Commencement eve, father and son recreated that 1998 photo (as they also did in August 2015, the day that Gordon and his classmates arrived at Bates.)

“It was nice to have a personal moment with just my parents amidst the busyness of the weekend,” says Gordon, whose brother, Alex, will be a Bates sophomore in the fall.

Says Halsey, “Recreating these photos makes me understand that Gordon has unexpectedly multiplied Julie’s and my joy, creating his own deep connection to this special place — to his special people. And so, there is joy, belonging, and connection created through returning, sharing, and multiplying.”

For Gordon, the quietude of Saturday gave way to big emotions on Sunday as he marched onto the Historic Quad with his classmates.

“As I walked up to the Quad and reflected on everything I had done at Bates and memories I had made there, as well as the memories my parents had made at the same place, I began to cry. It really has been an incredible time, and being able to share it with my parents is all the more special.” 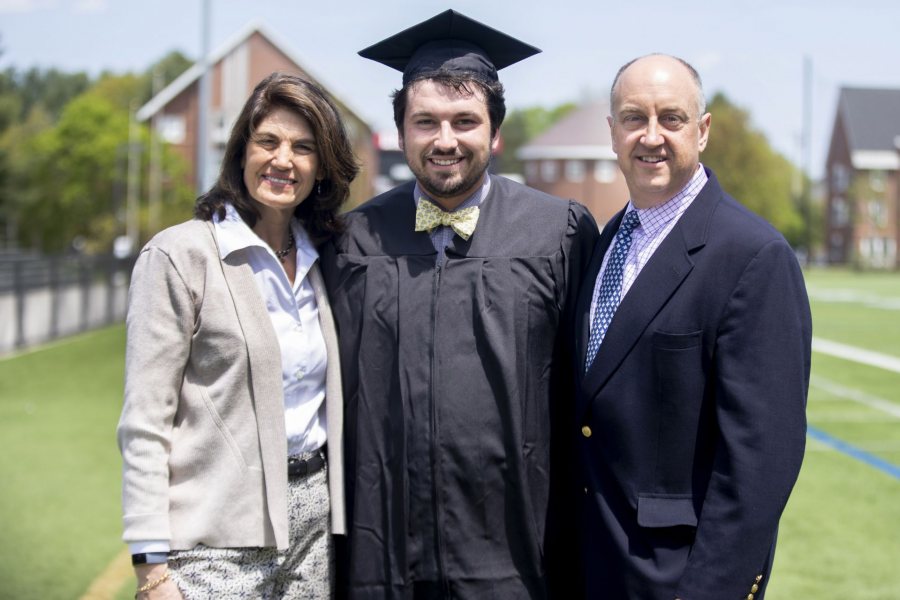 Posing on May 25, the day before Commencement, are Gordon Platt ’19 and his parents, Julie Sutherland Platt ’88 and Halsey Platt ’88. (Phyllis Graber Jensen/Bates College)