As the sun rose on June 9, a line snaked from Underhill Arena past Merrill Gymnasium to Central Avenue, then up the sidewalk to Lewiston Middle School, a full block away.

Hundreds of people bearing bags, wagons, and cash waited patiently for the start of Clean Sweep, the annual yard sale of items donated by Bates students as they left campus for the summer.

Clean Sweep is at once a fundraiser, a drive for local nonprofits, and a way to reduce the college’s and the community’s environmental impact. Two local organizations, John F. Murphy Homes and SHARECenter, organize and run the sale, then split the proceeds. In turn, Bates offers the use of Underhill Arena for free.

For everyone involved, the Clean Sweep paid off. Bates saved thousands of dollars on waste-transport fees , the sale raised nearly $33,000 — a record total — and leftover items went to numerous local organizations.

“It’s pretty awe-inspiring,” said Bates Sustainability Manager Tom Twist, “to see the nonprofits clean and set up and distribute the amount of material that might otherwise go into a landfill.”

After moving through the well-managed line, shoppers who entered Underhill were greeted with a cornucopia of college life. Bedding lined the walls. Bicycles were parked in a row. Buyers walked through a forest of floor lamps, picked through toiletries, or fished for the perfect yoga mat. People who wanted rugs pulled them from underfoot. 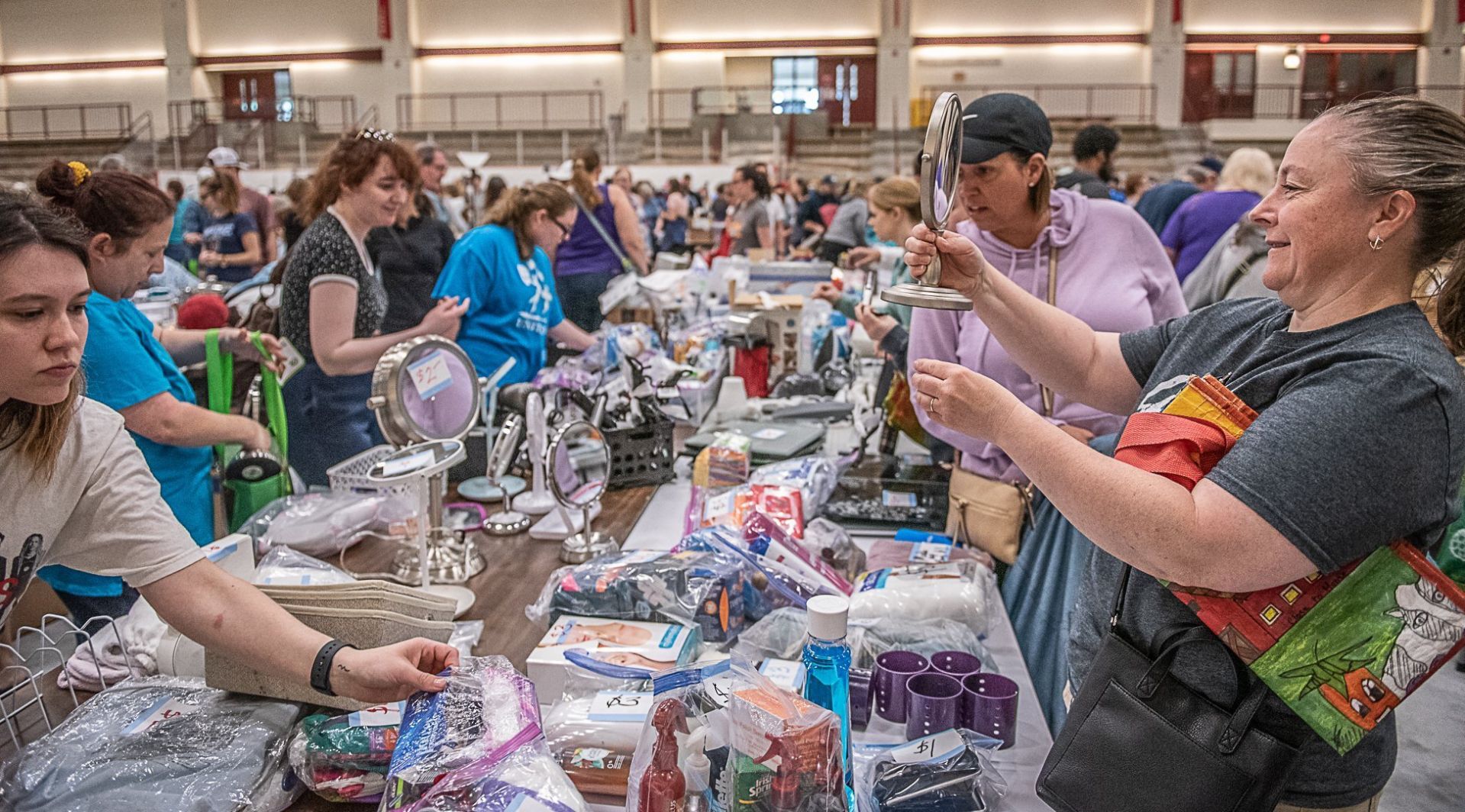 “It was literally shoulder to shoulder from 8 o’clock to 10:30 before it started to subside,” said SHARECenter director Lisa Rodrigues.

In the weeks before the end of the school year, Bates students brought items they no longer needed or were too costly to transport home to pickup locations in their residence halls

Volunteers with John F. Murphy Homes, which serves children and adults with intellectual and developmental disabilities and autism spectrum disorders, took the items to Underhill.

Then, Auburn-based SHARECenter, an educational supply unit that collects and distributes items to schools and nonprofits, recruited volunteers from numerous organizations to sort through and price the material — hand mirrors, piles and piles of clothes, an Egyptian drum.

SHARECenter also brought in items from elsewhere, such as filing cabinets from TD Bank and furniture from demolished houses.

Rodrigues, who ran the sale for the first time this year but has worked the event before, said the number of donated mini-fridges shot up this year, as did egg crate mattress toppers. In the years she’s worked Clean Sweep, both the number of physical textbooks and media like DVDs have dropped sharply.

The volunteers organized the items into neat aisles — shelving here, electric kettles there — and managed the sale. Groups such as churches, the Trinity Jubilee Center, and Advocates for Children took clothing, bedding, and furniture that went unsold or were set aside for them.

In addition to the community benefit and reduced waste disposal costs, Clean Sweep serves an important sustainability goal, Twist said. Most items require some form of carbon emission to produce — so if people reuse instead of buying new, the carbon footprint shrinks.

“That’s something we’re really mindful of post carbon neutrality,” he said. “What sort of impact are we having, not just in terms of fuels that we’re burning on campus, but fossil fuels that we’re causing to be emitted somewhere else in the world?”

Rodrigues said she hopes Bates students know how valuable their donations are to the local nonprofits and the community.

“We truly appreciate all their generous donations,” she said.