Summer’s here and the time is right … for construction projects at Bates. Here’s how the major initiatives looked in early July:

A refusal they can’t offer

Most of the time, the last thing the boss wants on the work site is a lot of refusals. (Trust us — we know!)

In the case of the Bonney Science Center construction, though, more refusals would be welcome, at least when it comes to the pile-driving that’s now underway. For the pile-driving professional, “refusal” is a good thing. It means that the pile you’re driving has penetrated as deep as it can — it refuses to go deeper — and it will bear the load it was intended for.

The pile driver in use at the Bonney Science Center site is, in effect, a one-cylinder diesel engine. A falling piston within a cylinder compresses an air–diesel fuel mixture. Compression makes the mixture explode, forcing the pile down and the piston back up for the next cycle. (Jay Burns/Bates College).

At the Bonney site, refusals aren’t coming fast enough. The pipe piles that will eventually support the building’s foundation are going deeper than expected before they meet refusal, and in virtually every case, that has necessitated splicing a second section of pipe onto the first one.

“It was not unanticipated that some of this might be needed, but it looks like it’s going to be just about every single pile,” says Chris Streifel, the project manager representing Bates in the Bonney project.

In this project, a pile is deemed to have met refusal when it has moved less than an inch after 14 blows from the pile driver. Incidentally, “refusal” is not synonymous with contacting bedrock. For a given pile, a variety of conditions can create resistance sufficient for meeting the load criteria. 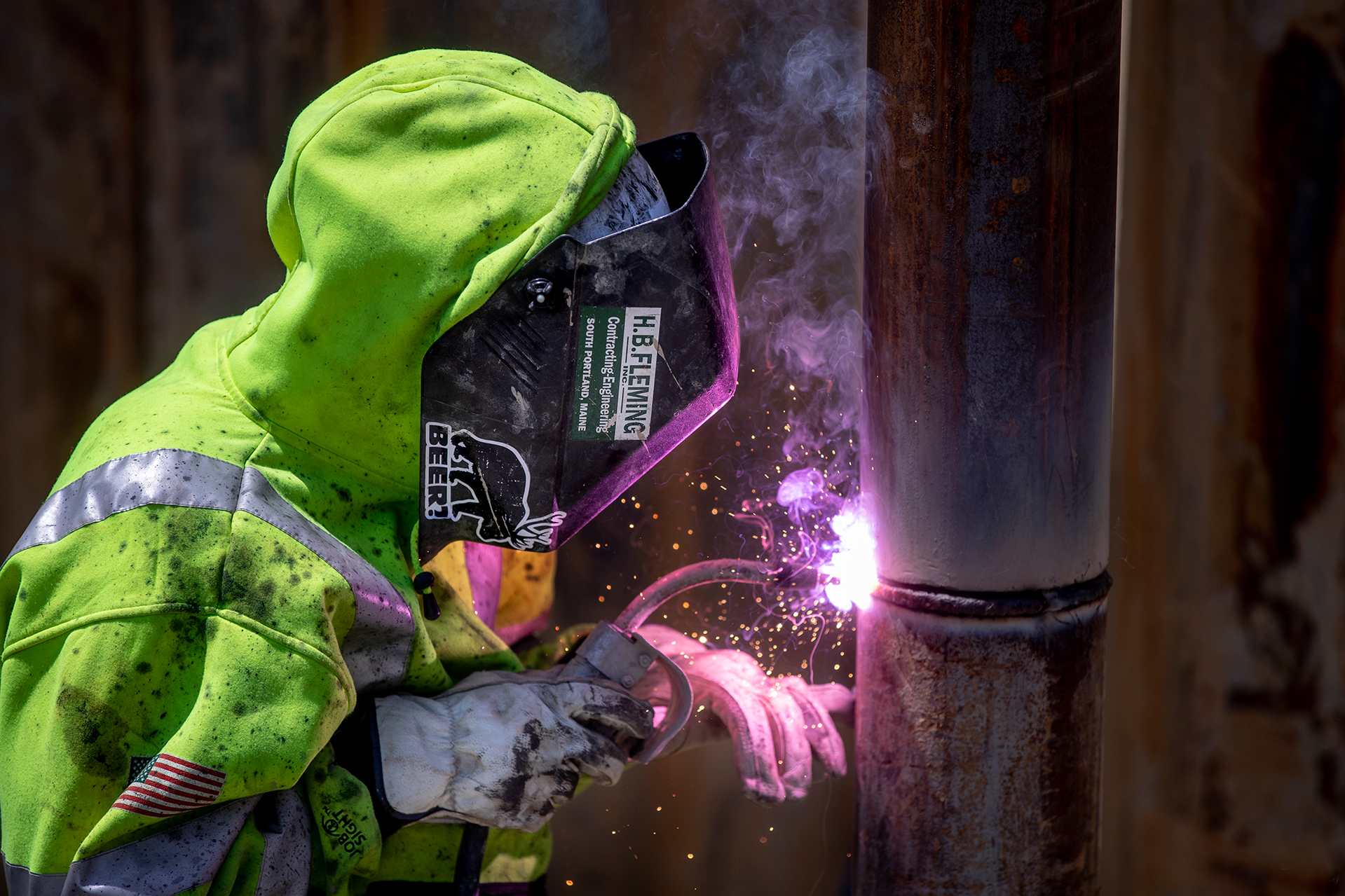 “Somebody told me that they hit something solid like a boulder the other day, so they got refusal without having to splice. That was nice,” Streifel laughs. “One out of a couple hundred, ultimately, that are going into the ground.”

The next step after refusal is to cut the protruding pipe down to approximately the level of the soil (marine clay!) in the foundation hole. Then the pile is filled with concrete and a threaded rod is inset into the fresh concrete at the top. After it hardens, a steel plate 18 inches square and an inch thick is set onto the pipe and bolted down onto the threaded rod.

The plate is then bedecked with the fascinatingly nicknamed “stone pillow” — which sounds like a 1960s country-rock group, but is actually an 18-inch layer of compressed crushed rock wrapped in geotextile fabric. This further distributes the load.

And then it’ll be time to start placing concrete footers for the building foundation. 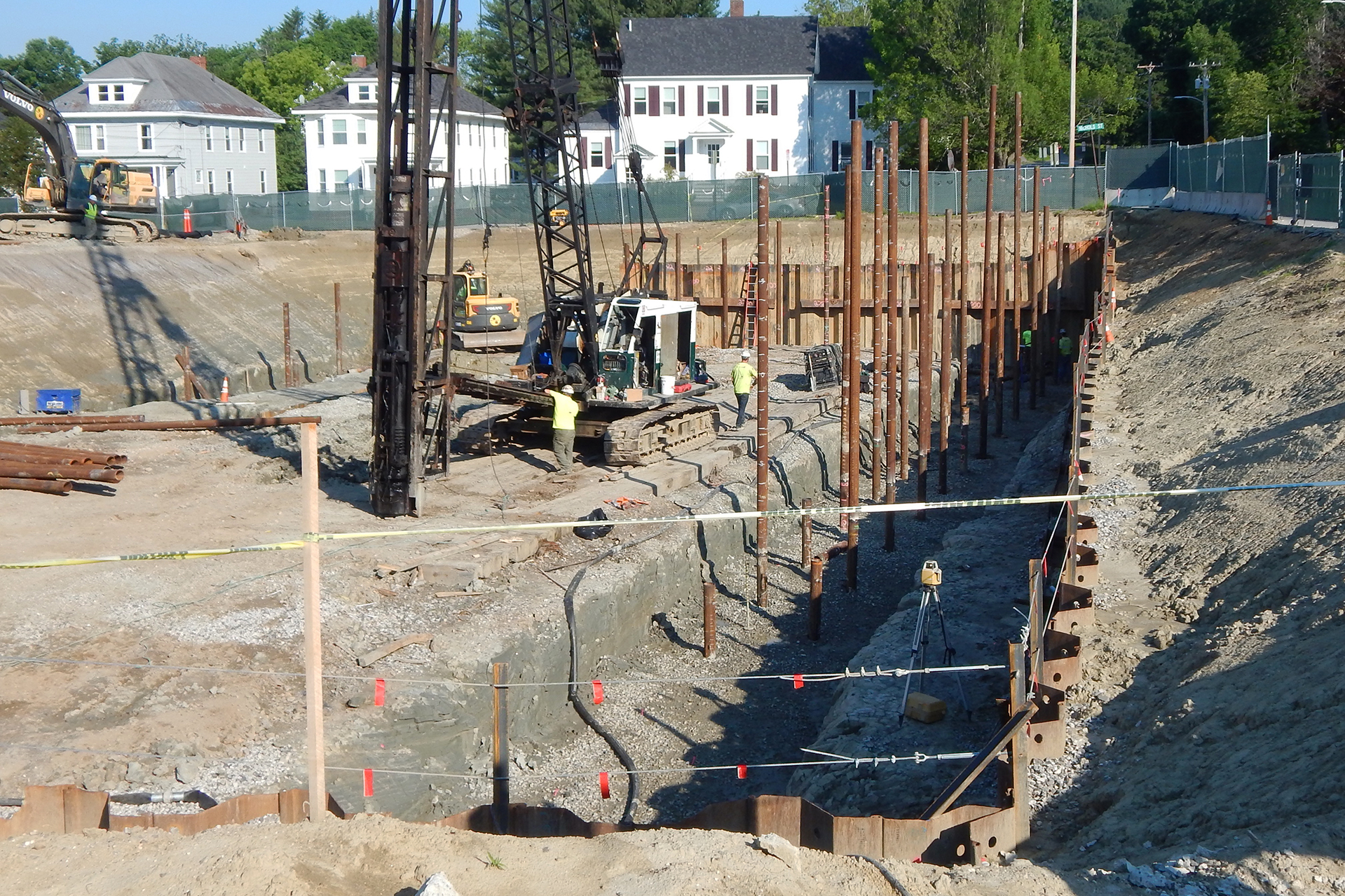 Despite the complications that come with splicing, pile-driving subcontractor H.B. Fleming has established a productive groove with its work. Shortly before the July 4 holiday, more than 50 pipe-piles had been driven to refusal, or nearly a quarter of the total. On average, the piles have been sunk 50 or 60 feet.

The week of July 8, concrete trucks will arrive to start filling the driven pipes. Thereafter, in Streifel’s words, there will ensue “a really intricate dance” in the foundation hole: Workers for H.B. Fleming will keep working the piles, concrete crews will be filling piles, earthworking firm Gendron & Gendron will return to start placing the stone pillow, and then the concrete folks will be back to start on the actual foundation.

“There are going to be up to three trades trying to work in there at the same time,” Streifel says. For Consigli Construction, the firm managing the overall project, “that’s going to be a coordination monster, because real estate is extremely tight.”

Going to the chapel

The Bonney Science Center is not the only project Consigli is overseeing at Bates this summer.

On June 10, the firm enclosed the Peter J. Gomes Chapel with a construction fence and got to work on the building’s exterior masonry. As we described previously, the work is a new phase of a restoration project begun early in this decade. 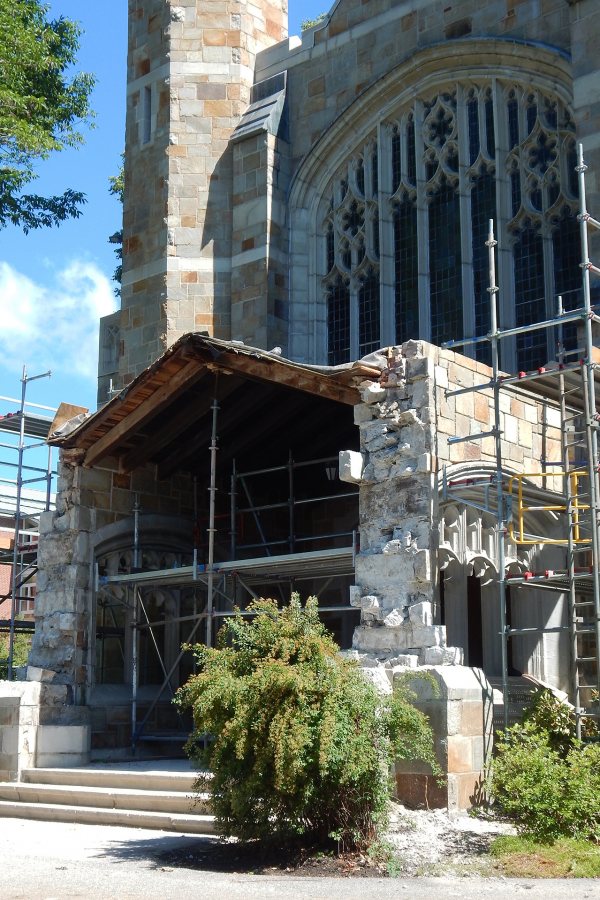 Consigli has begun with what Bates project manager Shelby Burgau calls “destructive investigation” of the chapel’s portico, seeking to determine its structural soundness. Although, as Burgau says, “they’ve planned for the worst-case scenario — that the whole portico is going to come down and be rebuilt from ground up,” she’s optimistic that a less drastic makeover will do the trick.

But the chapel’s masonry repairs, overall, will involve much of the building envelope. Consigli will repoint most of the seams (the turrets were repointed previously), replace or reface individual granite stones as needed, and replace a lot of “cast stone,” aka concrete.

Specifically, all of the cast stone windowsills will be replaced, as will the fancy traceries that embellish the windows on the east and west walls. (The north and south traceries will be done next spring. The east- and west-side stained glass windows, now off site, will be reinstalled following the sill and tracery work.)

And replacement is possible for substantial portions of the cast stone courses that run along the walls — band courses (which do not involve glockenspiels, but we’re always happy to mention glockenspiels) and angled plinth courses that cap the protruding base of the walls.

Also on Burgau’s dance card this summer is a project doubling the size of the college’s sports medicine facilities, in Merrill Gym. The primary goal of the project, which began the second week of June and should be complete by mid-August, is to create dedicated space for the physical exertions prescribed in sports medicine — training, exercise, stretching, and other activities that Campus Construction Update tries to avoid.

Until now, limited space in the program’s suite on the ground floor has forced student athletes to perform those exertions in Merrill hallways. So a second-floor racquetball court is being transformed into an 800-square-foot sports medicine workout area, and the present space will be used primarily for first aid and other treatments, such as icing and taping. 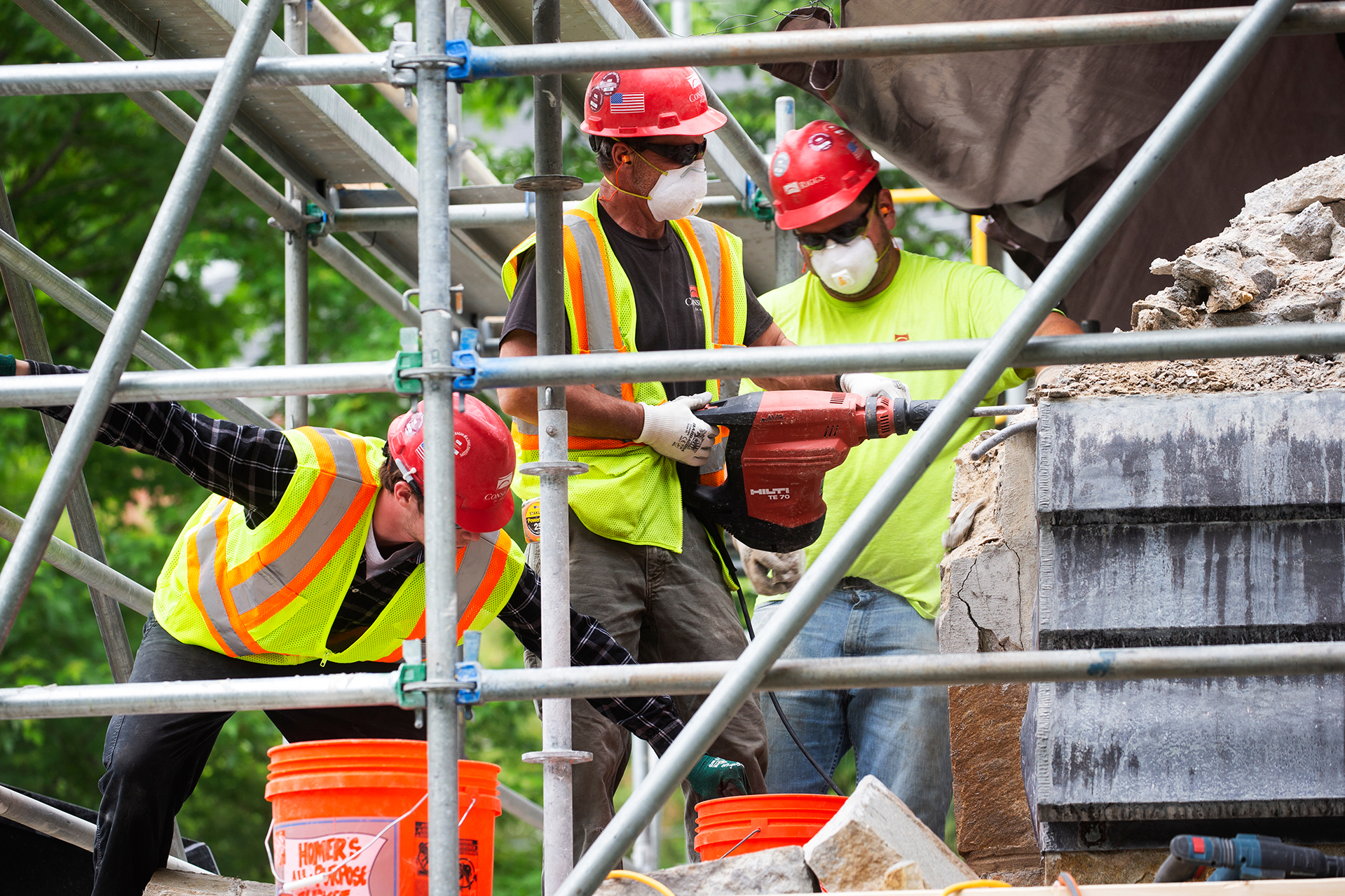 Because construction so often triggers domino effects — tenants being booted out of one space are shifted to another, whose tenants are booted out, etc. — the sports medicine project entails additional repurposing of space in Merrill, involving football offices and custodial facilities.

This roundelay is driven in part by the presence of a large ice-making machine in the former custodial area on the first floor. The ice was traditionally used only to treat injuries, but the plan now is to also use it in drinking water. This wouldn’t be permissible if cleaning chemicals continued to be stored in the same room. But cost and other factors make it impractical to move the icemaker. 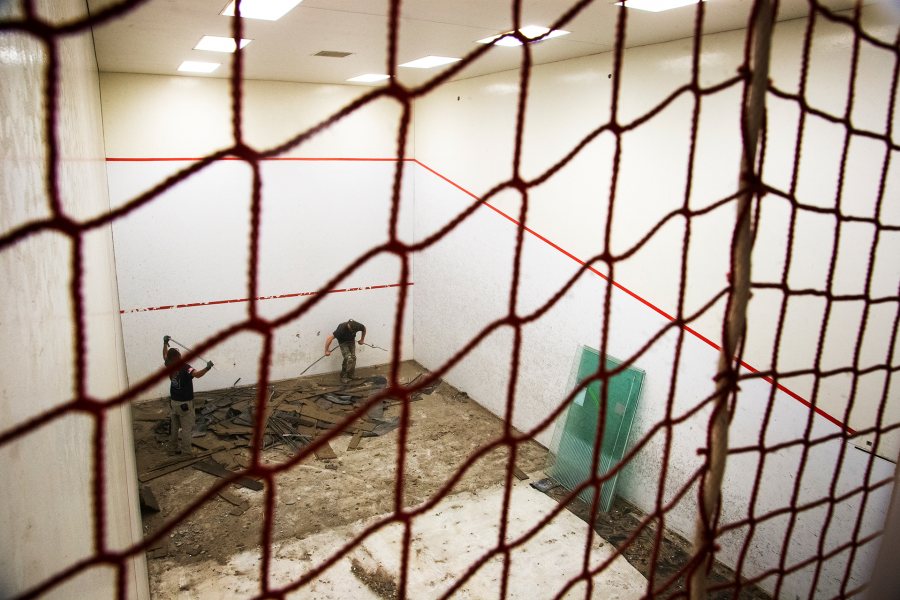 Demolition of a Merrill Gym squash court in June 2019. The area is being repurposed into a physical therapy area for Bates’ sports medicine program. (Theophil Syslo/Bates College)

So the icemaker will stay put, the custodians and their cleaning products will move to a new and larger location, and the old custodial space will be converted into offices for assistant coaches.

Finally, Burgau is also overseeing renovations in Coram Library that will result in, among other things, the establishment of a virtual-reality media studio. We’ll tell you about that in a future update, as soon as we figure out what virtual reality is. Real reality is confusing enough.

Hebert Construction of Lewiston is the contractor for the Coram and sports medicine projects.

One of the summer’s most conspicuous construction projects is the replacement of the grass at the college soccer field on Russell Street. 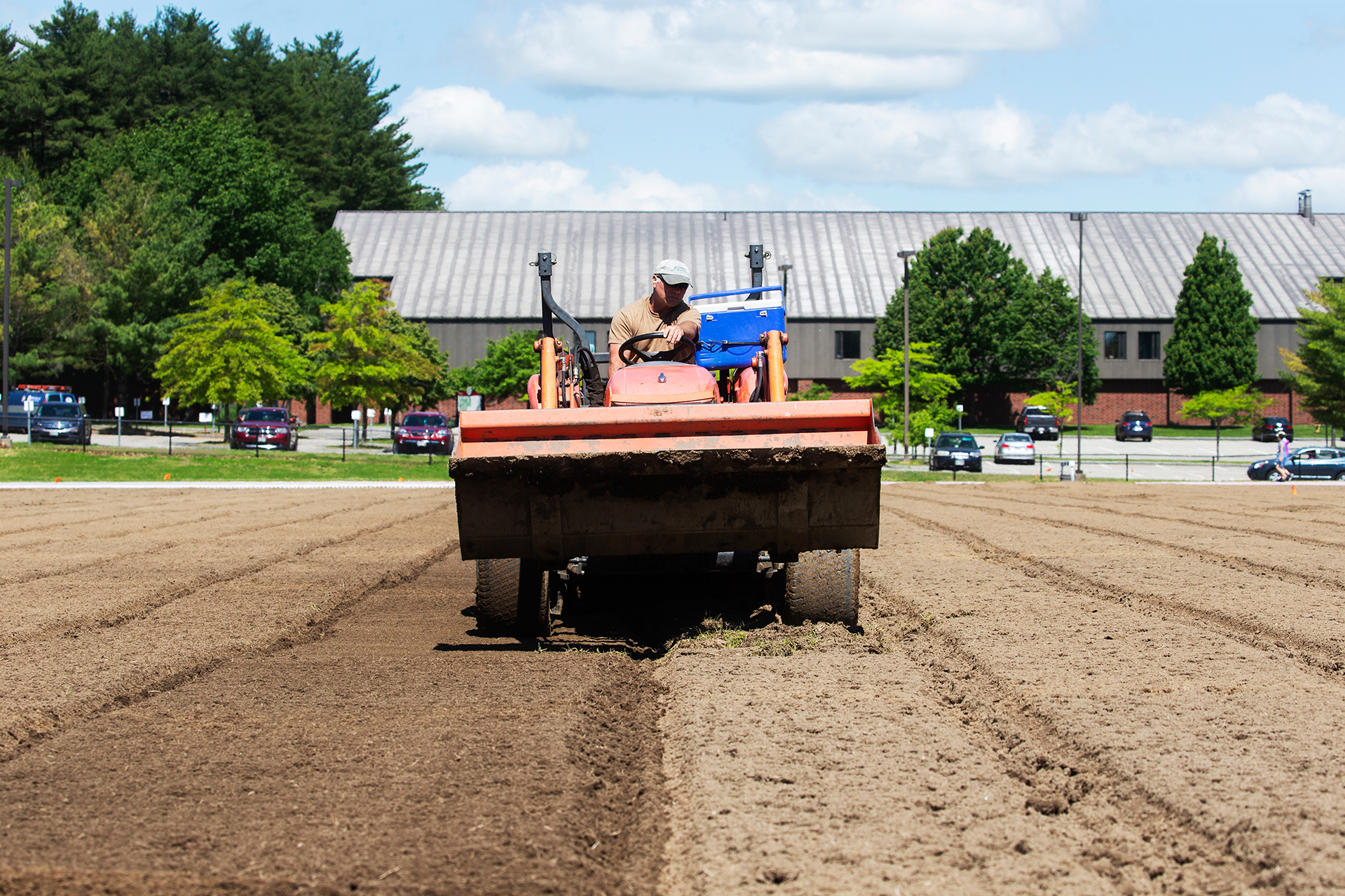 “The field is not in what I would term terrible shape, but it’s had a number of years of use, and this is a nice opportunity to upgrade it,” explains Jay Phillips, director of operations for Facility Services.

Part of an outdoor sports complex on the far side of Merrill Gym and Underhill Arena, the soccer field is enclosed by Bates’ outdoor track. Despite regular maintenance, 19 years of soccer-cleat caresses have taken their toll on both the grass and the underlying soil.

The new sod will give players better footing and thus enhance their confidence and the level of play, explains Scott Lehmann, Bates’ assistant athletic director for facilities and recreation. He adds, “The old grass field presented a few risks and unsafe conditions that the college wanted to address.

“We’re excited to have this new, competitive, safe, and reliable surface for Bates student-athletes to compete on.” 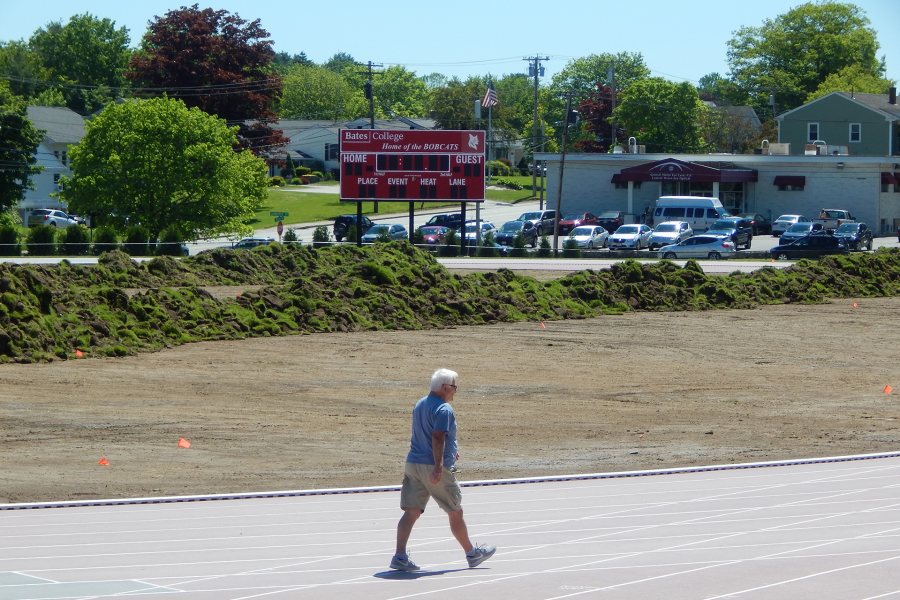 With a walker on the Russell Street track in the foreground, heaps of old sod on the Bates soccer field await removal on June 12. (Doug Hubley/Bates College)

The Monmouth, Maine, firm of Sports Fields Inc. is redoing the field. They got to work on June 10, peeling off the old sod and heaping it up for removal — which couldn’t happen until the 13th, thanks to heavy rain. (Bates has stockpiled the old sod at its Strawberry Avenue storage facility for possible reuse around campus.)

Ten days later, Sports Fields spent a couple days adding some new soil and contouring the field, using a tractor-towed, laser-guided land leveler to flatten the surface and build in a slight crown to promote drainage.

“We’re excited to have this new, competitive, safe, and reliable surface for Bates student-athletes to compete on.”

Environmental Solutions of Yarmouth, Maine, is scheduled to come in July 8 to adjust the irrigation heads and valve boxes to the right level for the new sod, says John Griffiths, grounds and maintenance manager for Facility Services. “They should be done on July 10 and weather permitting, the sod could start being laid down as early as Thursday or Friday.”

That would take three days under ideal conditions — but, adds Griffiths, “the weather has not been cooperating with us, and this is not the kind of job that can be done if the field is wet.”

We’re looking forward to seeing the sod go down. As Phillips explains, the new bluegrass — yep, real live grass — will arrive from Fryeburg, Maine, in giant sod rolls, each four feet wide and 64 feet long. It will take approximately 300 rolls to cover the 9,000-square yard field.

“And then, the most critical piece is that the turf is heavily watered,” says Phillips, “for a minimum of six weeks without activity on it. And longer is even better to get it to root in and really be secure.”

The project has been funded by parents and alumni, along with support from the college.

Can we talk? Campus Construction Update welcomes your questions and comments about current, past, future, and imaginary construction at Bates. Write to dhubley@bates.edu, putting “Campus Construction” or “Did the Stone Pillows sing ‘Different Drum’?” in the subject line. 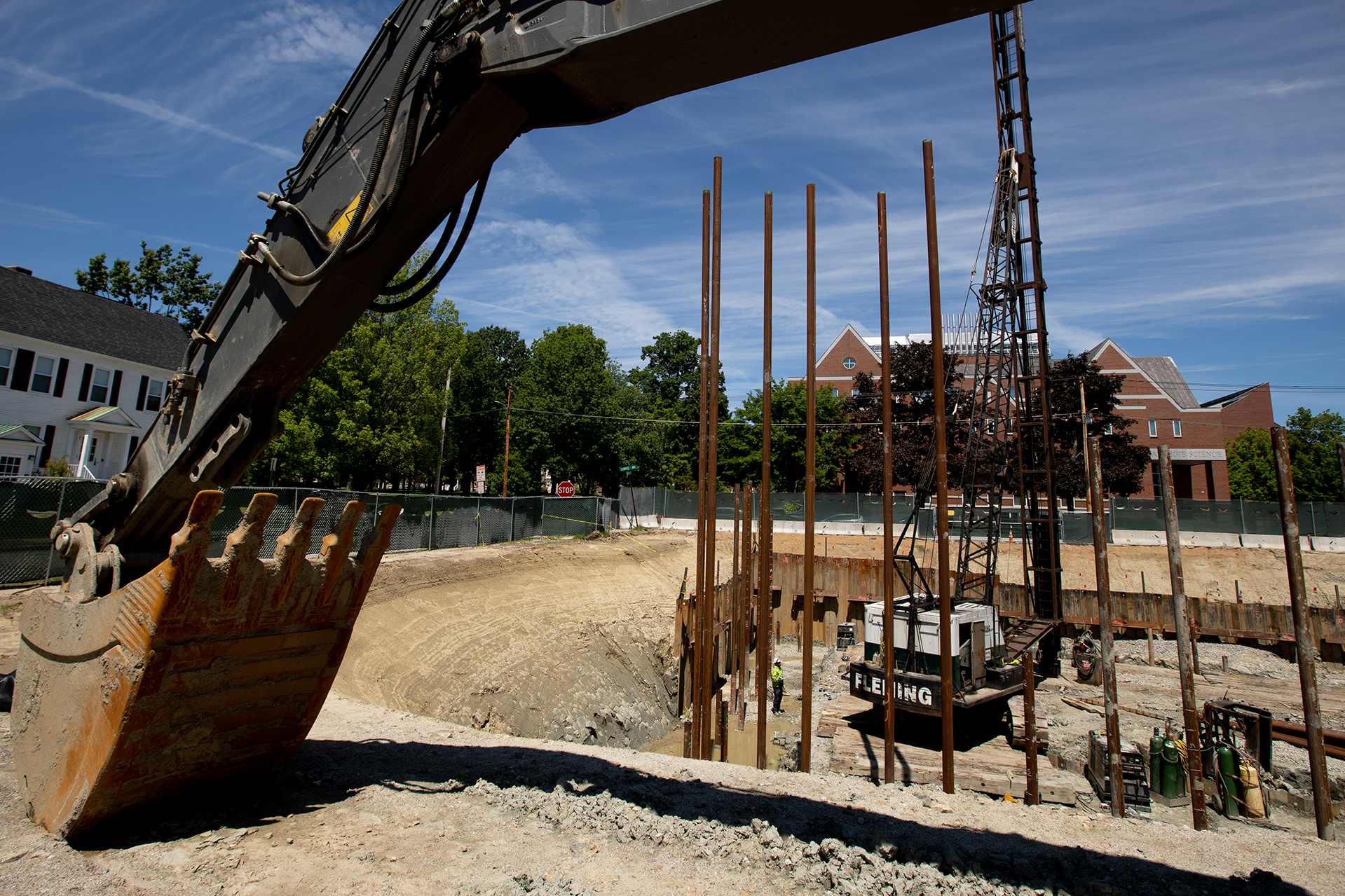