We’ve passed another milestone in the construction of the Bonney Science Center, as most of the concrete basement floor was placed yesterday.

Northeast Concrete Pumping and Auburn Concrete showed up around 7 a.m on Oct. 3. We got there nearly two hours later and, after hauling the 8-foot Campus Construction Update stepladder around for a while, we found a good vantage point to enjoy the scene.

Getting Here From There: Short-term closures of Nichols and Bardwell streets where they meet Campus Avenue will continue into autumn because of Bonney Science Center construction. Notably, Bardwell at Chu Hall will be closed during the forthcoming autumn academic break, Oct. 16–18, for the installation of an electrical transformer that will serve the science center.

“The goal” at all times, notes Chris Streifel, Bates project manager for the Bonney center, “is to minimize closures.”

The concrete pumper had an articulated boom that’s long and limber enough to access any point in the Bonney footprint. The outlet was a canvas hose about as big around as your lower leg. While one worker used a remote control to maneuver the boom, another worker handled the hose as it spewed. As he waded around the site, up to mid-boot in new concrete, other workers used screeds, floats, and other tools to spread and contour the stuff.

Earlier in the week, getting ready for the concrete action was a scramble. The trades working inside the Bonney foundation wall included plumbers installing drains; “rod busters” who were laying a rebar grid to reinforce the floor slab; and, all doing a wide variety of jobs related to concrete, employees of Concrete Craftsmen of North Monmouth, Maine, and of Consigli Construction, the firm managing the Bonney project for Bates.

We enjoyed seeing all the colorful preparatory stuff that was laid down before the fresh concrete covered it up forever. First, a platform of compacted gravel went in to provide solid, level support. Next, over the gravel, workers layered purplish-pink foam thermal insulation panels. 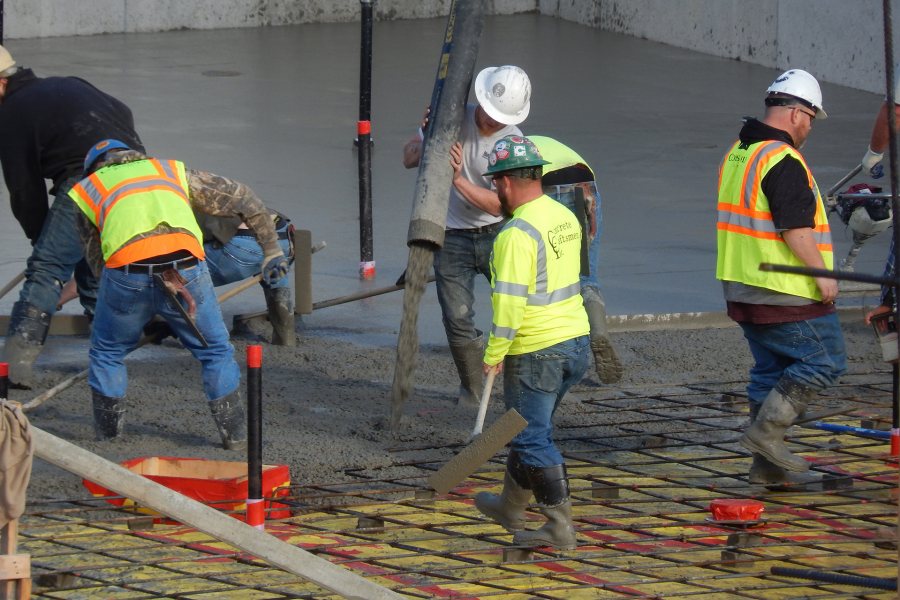 Atop the foam went a garish yellow membrane fastened together with scarlet tape, which together form a vapor-blocking system produced by Stego Industries, of California. And finally the rebar grid was installed.

And then, Thursday morning, came the concrete — about 160 cubic yards, estimates Jacob Kendall, the Facility Services construction administrator working the science center job. This comes in addition to the 400 cubic yards for the foundation walls and at least 300 for the footings that support them.

Let’s digress for a minute to consider the layout of the Bonney basement. Its only academic space will be a vivarium serving several programs. Otherwise it’s all building services, including three air handlers capacious enough to continuously renew the inner atmosphere.

Unlike other kinds of buildings, “the air isn’t recirculated in a science building,” explains Chris Streifel, Bates project manager for the Bonney center, because of the higher potential for exposure to hazardous materials. “The air is brought in, used, and expelled, whereas in other buildings you might be able to meet air quality standards with a mix of fresh air and recirculated air.” 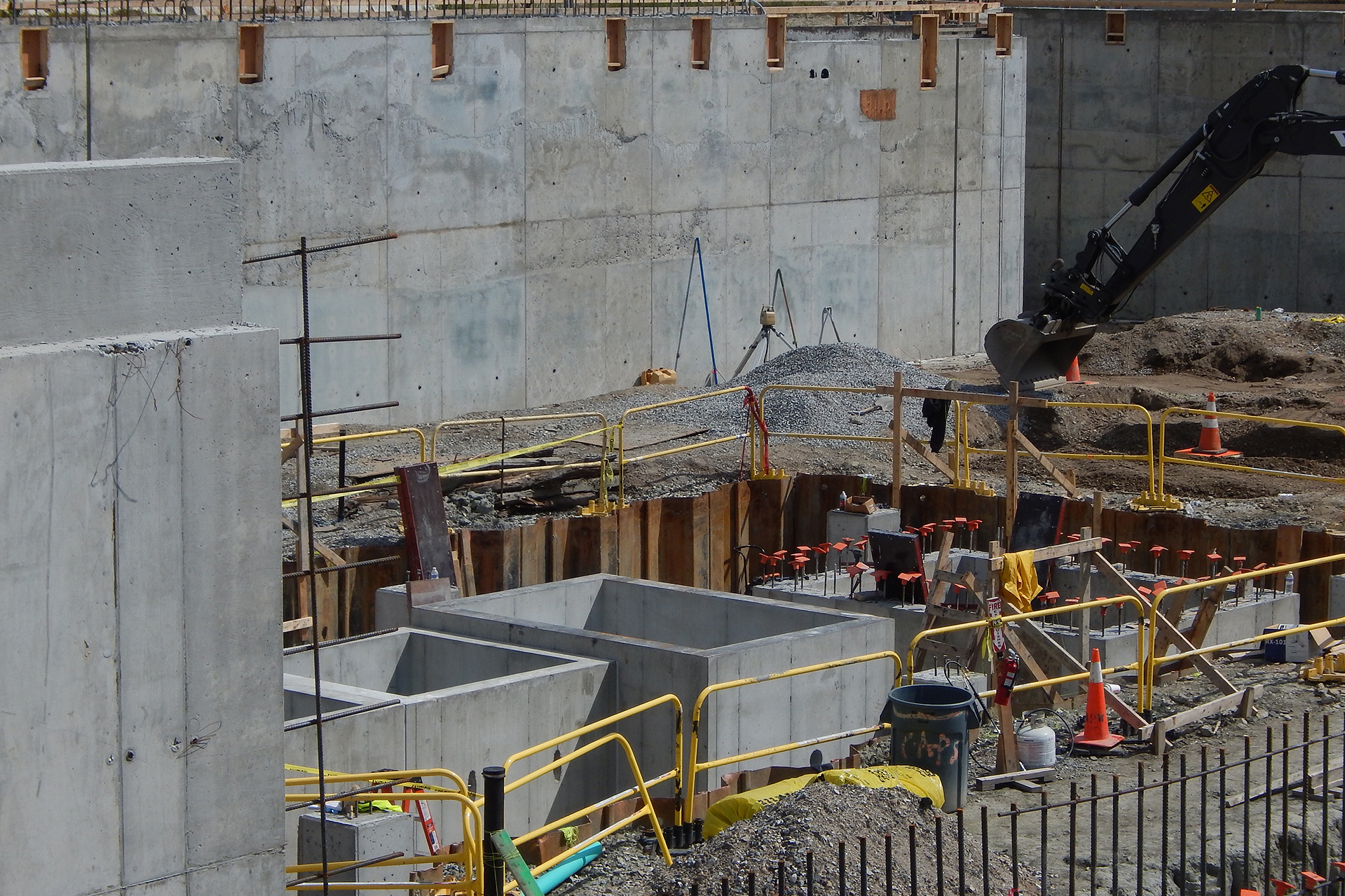 But back to the present. The high foundation walls largely block the view from outside the construction site, but if you could look into the basement now you’d see a temporary plywood deck covering a set of waste-liquid holding tanks and a separate well for the base of the elevator shaft.

You’d also notice that not all the floor has been paved with concrete — of the basement floor’s 10,550-square-foot total, 1,875 square feet remain bare. The bare patch is adjacent to a gap in the southern foundation wall, and this is no coincidence: Here is the future location of the “areaway,” a sort of tunnel that will ultimately be the air intake for that mighty HVAC system. During construction, though, it will be the route through which all the mechanical, electrical, plumbing, etc. infrastructure will be wrangled into the basement.

Complete with its own foundation, that will be built during October. Until this week, the areaway, er, area was occupied by the earthen ramp that had provided access to the foundation hole for construction vehicles since early summer. 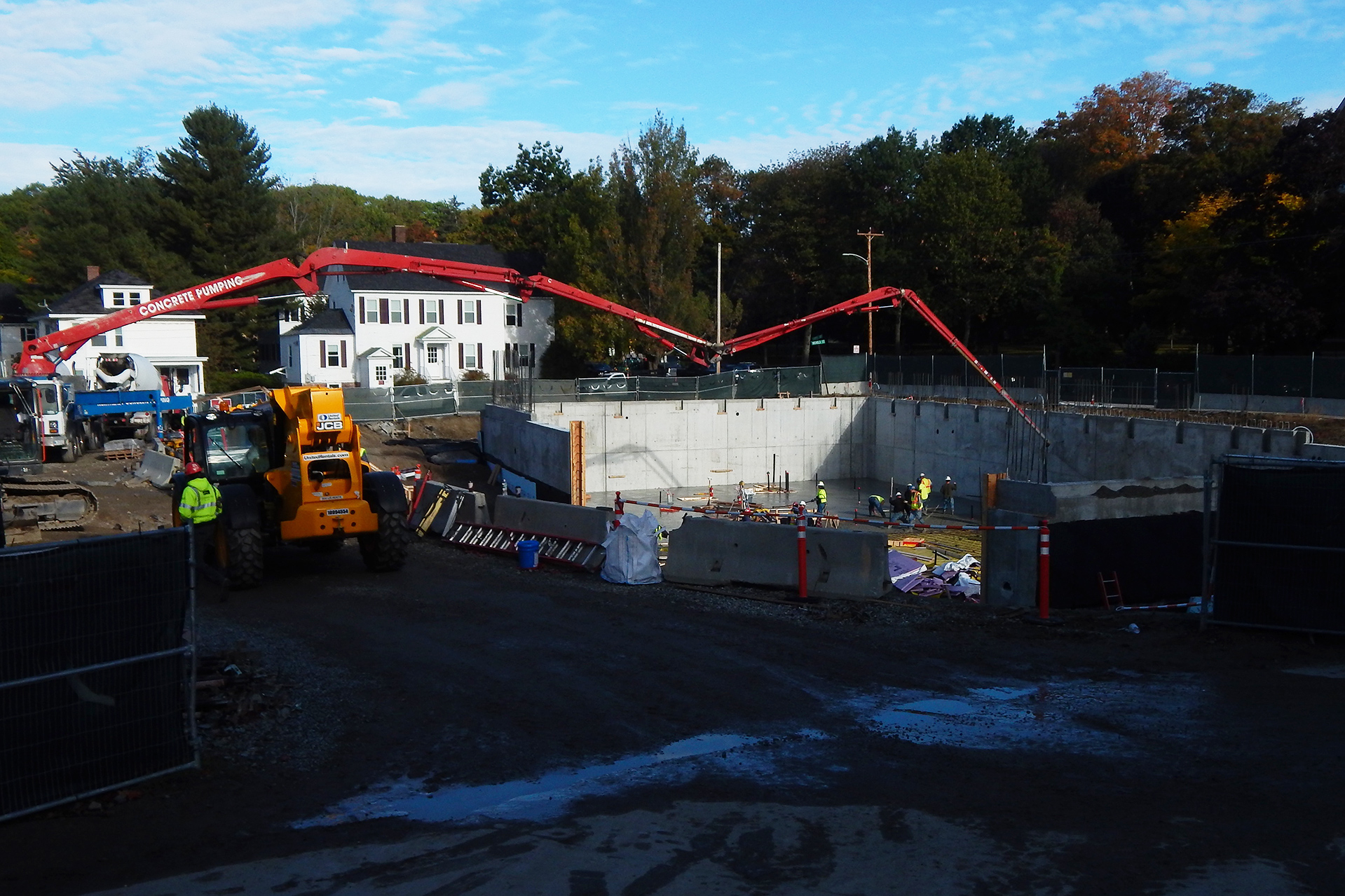 The concrete basement floor was placed in the Bonney Science Center on Oct. 3. The pumper at left is sending concrete through the boom to the furthermost corner of the basement. (Doug Hubley/Bates College)

On Tuesday we watched one of those machines, namely an excavator, dig up the ramp, backing slowly out of the foundation hole and pawing delicately around the pipe-pile caps that will support the areaway foundation. By Thursday morning, the ramp was gone and someone was using a torch to cut the exposed pipe piles flush with the ground surface. Like the other 200 or so piles, now out of sight and out of mind (but not our mind) under the growing building, these will be filled with concrete and topped with steel plates.

As long as we’re talking about milestones, the obliteration of that ramp was another one, at least for Campus Construction Update. Watching cranes, dump trucks, and excavators creep in and out of the big dig has kept us out of trouble during many’s the lunch break this summer. Yes, all good things must come to an end.

But, though missing the exciting ramp action, we have distracted and consoled ourselves by watching the application of protective materials around the exterior of the foundation walls. 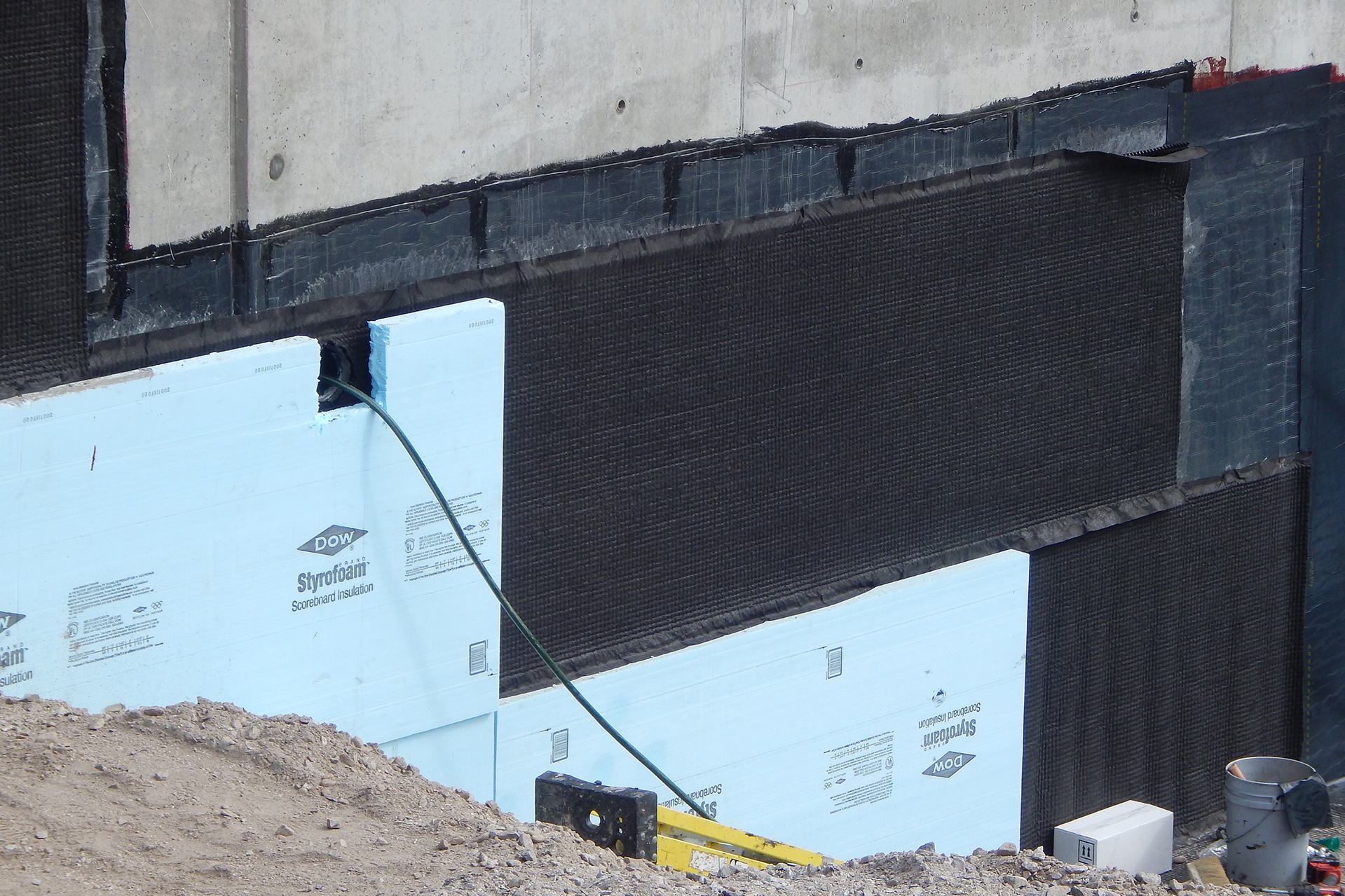 Here’s a section of the Bonney Science Center foundation wall showing blue thermal insulation panels, black waterproofing board and waterproofing film, and, at upper right, just a bit of the maroon adhesive that holds the film in place. (Doug Hubley/Bates College)

Their colors are less eye-catching than those of the floor underlayments, but they would work with evening wear: a burgundy adhesive paint coated with a black waterproofing film, all sheathed in a heavy protective drainage board, also black. The only misplaced color note is the outermost layer, polystyrene-foam thermal insulation panels in a “meh” pale blue.

The wall exterior has gotten other attentions too. Workers on ladders have performed such detail work as plugging holes left by fasteners that secured the concrete forms, gouging out bits of wood from the forms trapped in the concrete, and chipping off stray blobs of concrete.

Meanwhile, in addition to the prep for the basement floor slab, earth movers and concrete-form builders are engaged in another scramble, racing to place foundation footers at the east and west extremes of the building footprint — respectively, at Bardwell and Nichols streets. These locations, which the project team refers to as “the upper levels,” extend beyond the basement footprint, and their supporting footers are several yards above the basement floor.

The Nichols Street end is the further-along of the two, with backfilling in progress by the foundation wall and forms built for the footers. 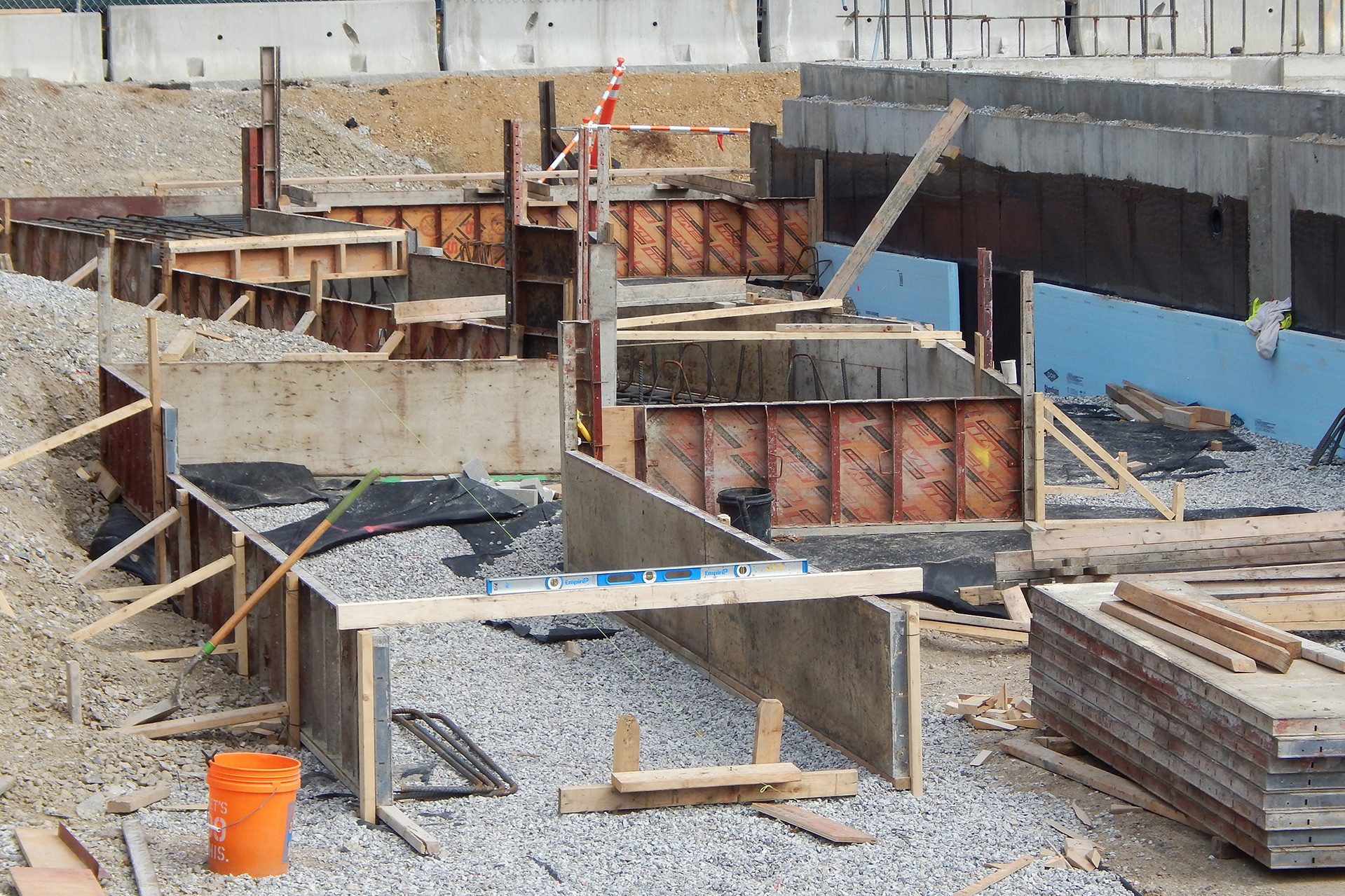 Forms under construction for foundation footings at the Nichols Street end of the science center site. (Doug Hubley/Bates College)

“It’s important to the schedule to get those upper foundations in so that they can put the entire slab down for the first floor,” says Streifel. Which process will also entail the first appearance of structural steel at Bonney: Beams will be laid across the foundation opening, followed by steel decking to support the concrete slab.

That first-floor slab is the prerequisite to erecting steel for the upper stories. “That’s in order to brace all of those big basement walls,” Streifel explains. “The slab and the steel that supports it are part of the building’s structural system.”

He adds, “I would expect to see steel on the site within the next couple weeks — ideally, it lands as planned next week. It’ll start kind of small, but you’ll start to see steel components going in here and there. And it’ll ramp up in a hurry.” Milestones galore!

There will be another benefit to the completion of the basement and first-floor slabs, Streifel notes: The shifting of work into those spaces will open up needed space in an extremely congested construction site.

“Every square foot has got a purpose right now,” Streifel says. “All of those materials have to be thoughtfully placed — ‘If you’re going to lay it down here, is it going to stay here for two weeks or do we have to move it somewhere else two weeks later?’” 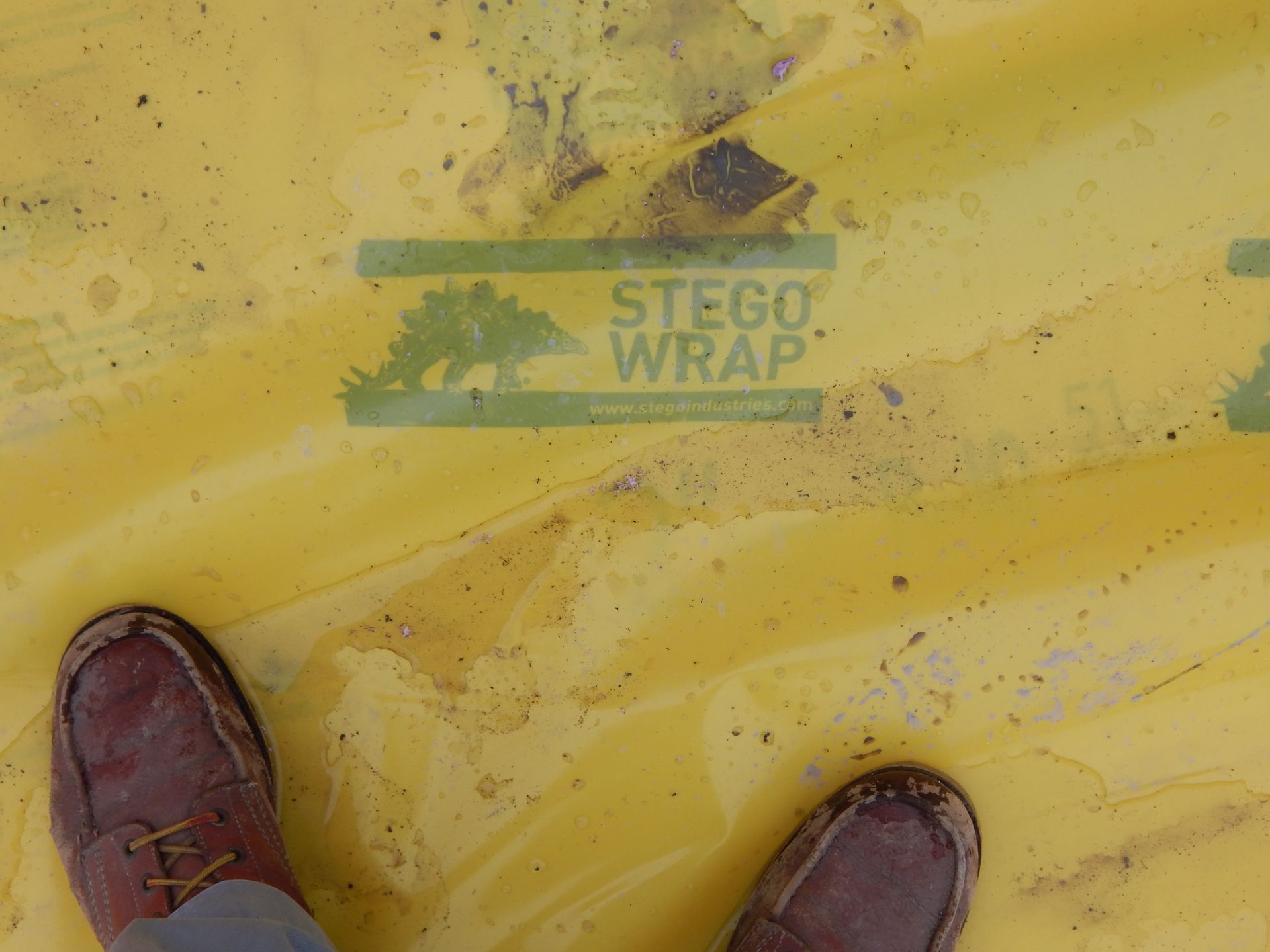