At the College Fed Challenge, Bates students learn about ‘the economy we live in’

By Emily McConville — Published on November 8, 2019

The U.S. economy is doing well at the moment. To promote continued economic growth, the Federal Reserve should keep interest rates essentially where they are, barring any major economic changes.

That’s the argument that a team of five Bates students will make today in Boston at the College Fed Challenge.

At the annual competition, hosted by the Federal Reserve Bank of Boston, student groups essentially become the Federal Open Market Committee, the body that governs U.S. monetary policy. Before a panel of judges, they’ll analyze the state of the economy, make predictions, and recommend ongoing policies. 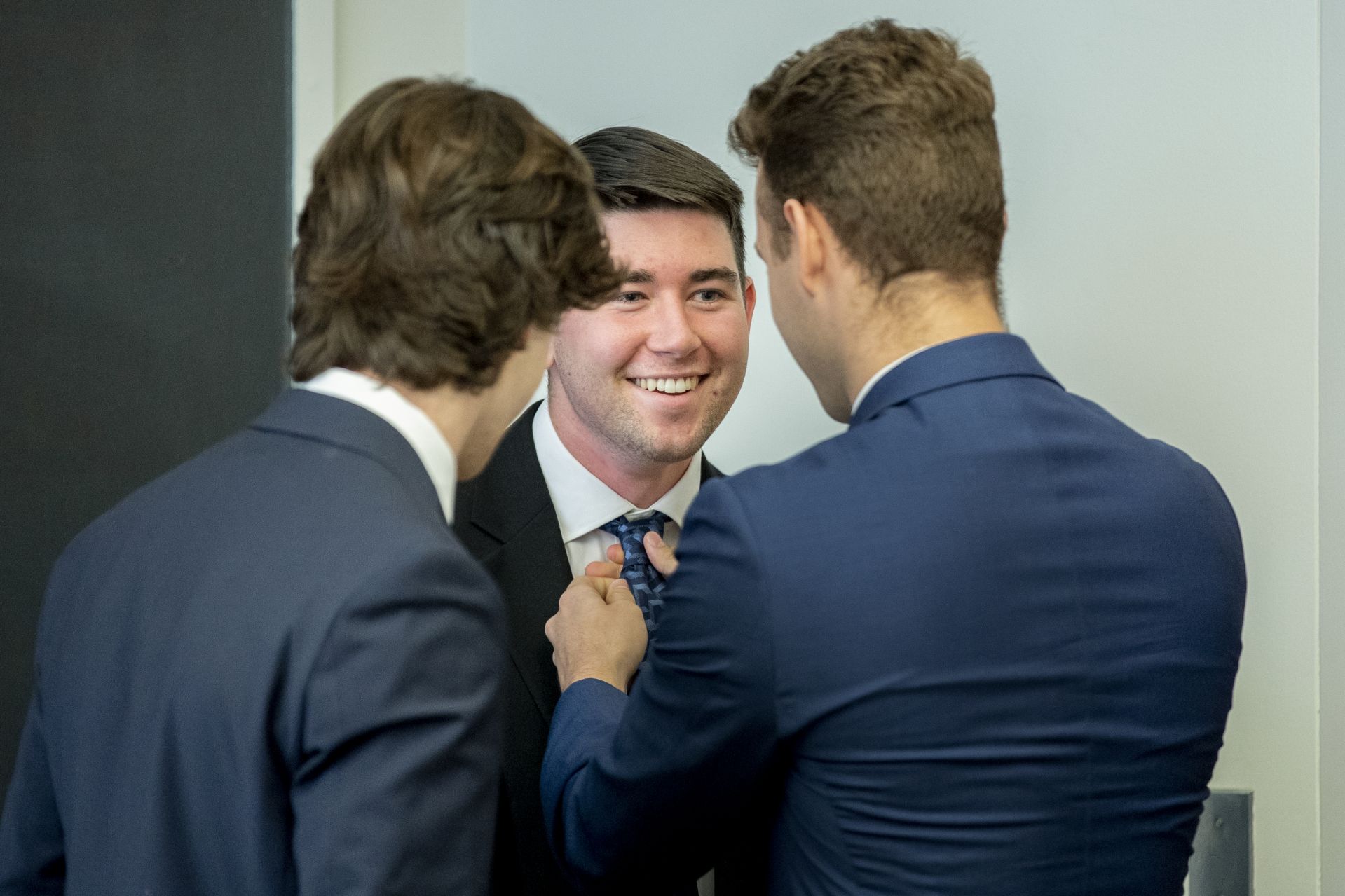 James MacDonald ’20 gets his tie straightened by his teammates on the College Fed Challenge, before a practice presentation on Nov. 5 in a Pettigrew Hall classroom.(Phyllis Graber Jensen/Bates College)

The winner of the Boston regional competition goes to the National College Fed Challenge in Washington, D.C.

“We’ve been learning about all of these different topics and factors and how we can use them to tell the health of the economy and look to the future,” said Bates team member Jackson Davis ’22 of Bedford, N.H.

Though Davis and his teammates — Ryan Rigione ’20, Thomas Dodge ’22, Jonathan Nichols ’22, and James MacDonald ’20 — will be the ones to speak in front of the judges, the data and analysis they bring to the challenge is the work of all the students in the economics course “Central Banking and the College Fed Challenge.”

The course is designed to help students better understand the role of central banks and how they conduct monetary and regulatory policies. And the Fed Challenge is integral to the course, said its instructor, Visiting Assistant Professor of Economics Michael Osei. 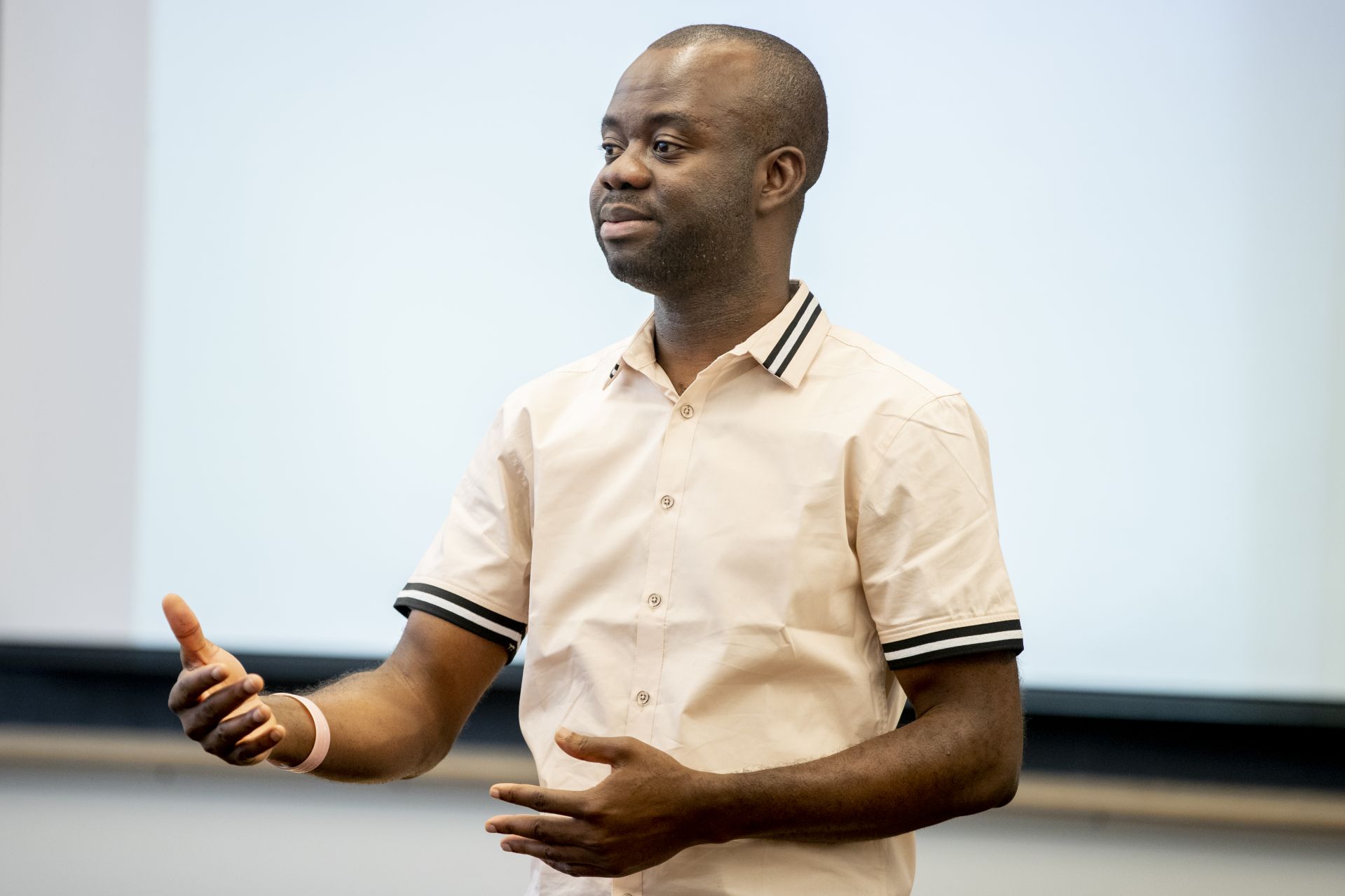 By incorporating the College Fed Challenge, a Bates economics course helps to demystify the U.S. economy, says Visiting Assistant Professor of Economics Michael Osei. “By taking this class, you get to know, ‘OK, this is the current state of the economy I live in.’” (Phyllis Graber Jensen/Bates College)

You usually hear about the Fed in conjunction with “the interest rate” — essentially, the institution’s target for what banks charge when they lend each other money. Raising or lowering that target by a fraction of a percentage point influences how easily people and businesses can get loans, and ultimately influences the money supply.

There are a lot of moving pieces, and learning about U.S. monetary policy can quickly become mystifying. “It’s so complex,” Osei said. “By taking this class, you get to know, ‘OK, this is the current state of the economy I live in.’”

That complexity was evident Tuesday in Pettigrew Hall, when the student team did a dry run in front of their classmates. Displaying chart after chart, they explained how various factors — GDP growth, spending, exports, Brexit, the trade war with China, how much wiggle room the Fed has to adjust interest rates, how much wiggle room people think the Fed has to adjust interest rates — were affecting the economy. 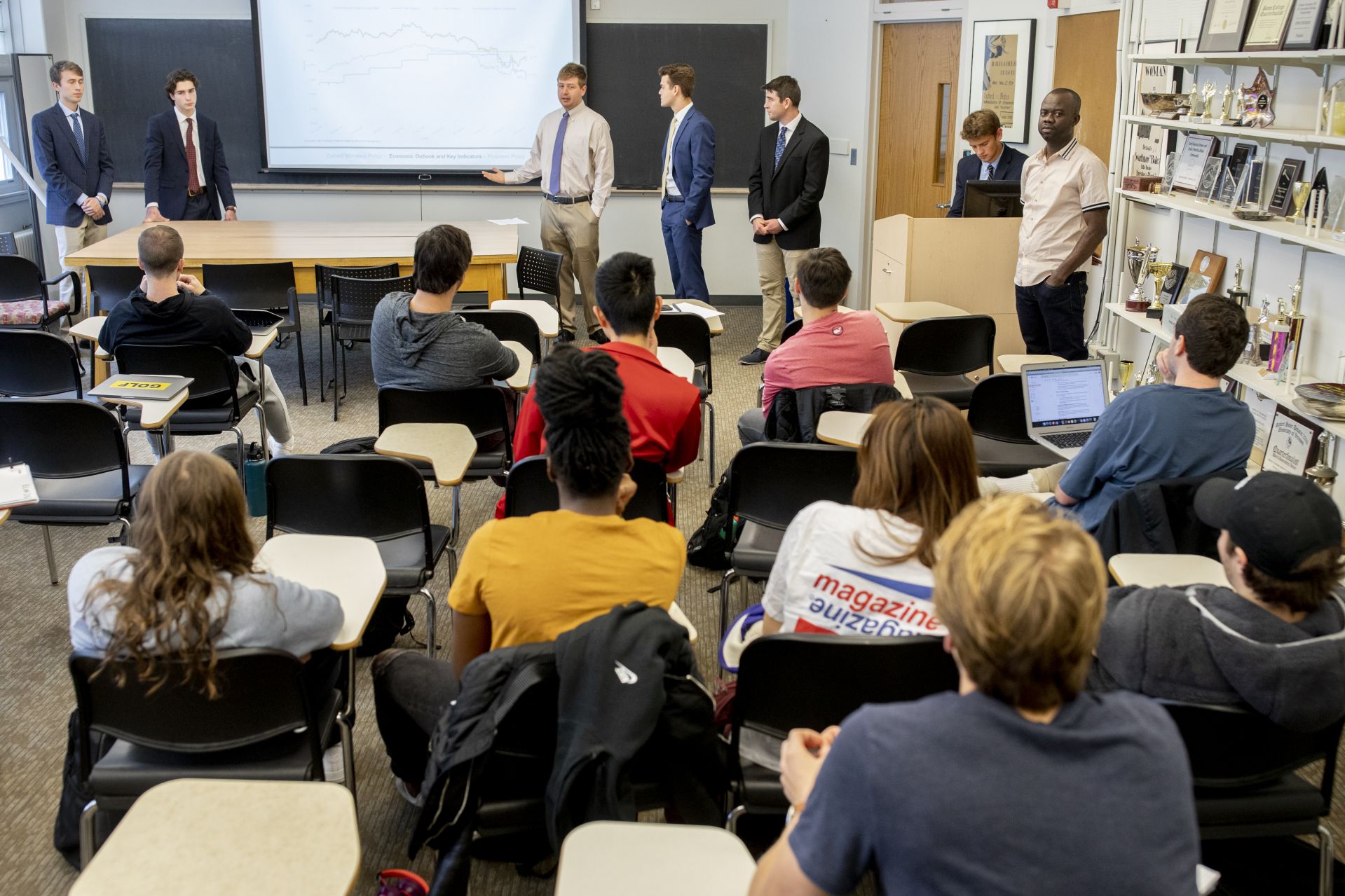 The five-member Bates team at the College Fed Challenge will use data and analyses prepared by all students in the course. (Phyllis Graber Jensen/Bates College)

All this is in real time, by the way. In Boston today, the students will describe the state of the economy — as of today. They recently had to tweak their calculations based on the Fed’s decision, at its October meeting, to cut interest rates by a quarter of a percentage point.

Despite the complexity of the subject, class discussions have been “student-driven, for the most part,” Osei said.

“You can pose a question, and then you will see students giving their own opinion and debating with one another. Then you get lost in the discussion, and students take ownership of the class.”

The couple dozen students in Osei’s class were all involved in collecting and analyzing the data that’s part of the Bates presentation, and they chose the five who will be the presenters, Osei said. Several other members of the class are going to Boston to support the presenters. 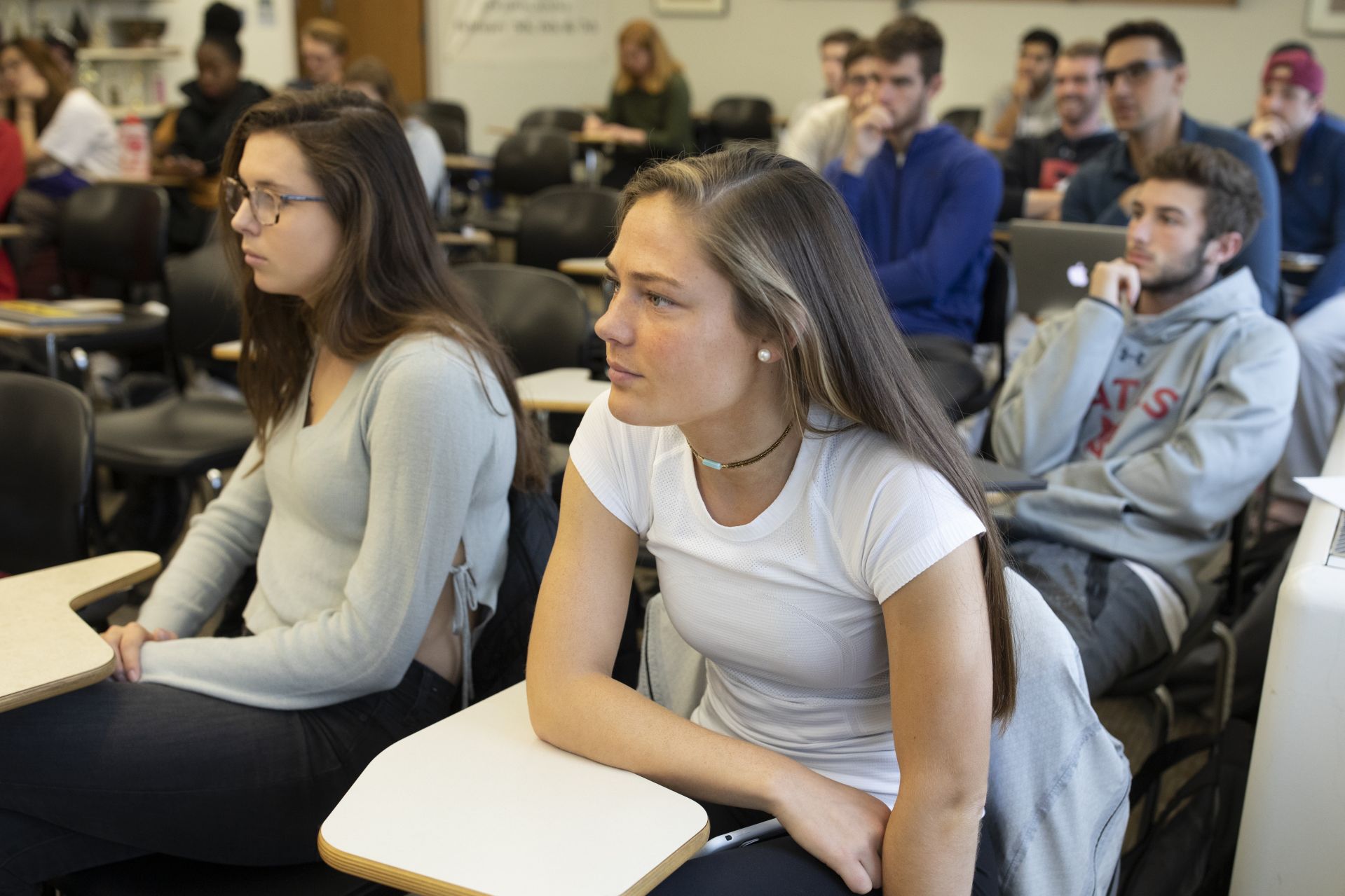 Class discussions about the health of the U.S. economy and the factors used to determine it have been largely student-driven, says Michael Osei. (Phyllis Graber Jensen/Bates College)

After the team’s dry run on Tuesday, their classmates piled on the questions and suggestions. Why focus more on Brexit’s impact on the U.S. economy and less on the 2020 U.S. presidential election? How did a recent trade “mini-deal” with China affect things? What happens when unemployment, which is currently quite low, inevitably goes up again?

“You’re seeing how everything works,” Rigione said. “I read a bunch of papers in advanced macroeconomics talking about how financial institutions are very important, but to be able to see how financial institutions interact with monetary policy and how monetary policy reacts to a bunch of different things, and actually see it happen in real time, is very interesting.”

Besides the prestige of participating in the Fed Challenge, the competition and Bates course are good preparation for a career in academia, banking, or finance, Osei said.

“When you watch CNBC or Fox Business and they are talking about Brexit or the inversion of the yield curve, you can say, ‘Yeah, I know what that means,’” Osei said.

From the Archives: Bates nurses, Julia Child, and a German ace