Dinner on the farm with poet and essayist Ross Gay

From the stage of the Olin Arts Center Concert Hall on Monday evening, poet and essayist Ross Gay read from his work. The audience laughed and murmured, satisfied by the wit and wisdom of this year’s Otis Lecturer, the 23rd since the establishment of the notable Bates series in 1996.

Twenty-six hours earlier, Gay, along with a dozen or so professors and majors in the environmental studies program, myself included, stood waiting in the parking lot behind Pettengill. Daylight Saving Time had just ended, and we were not used to 5:30 p.m. being quite so dark.

Darkness had delivered a chill, and we shivered as we chatted and waited for our entire group to arrive. Finally, the 17 of us piled into vehicles, mostly Priuses, and began our 25-minute drive to Nezinscot Farm in nearby Turner for a dinner to honor and welcome our guest to Bates. 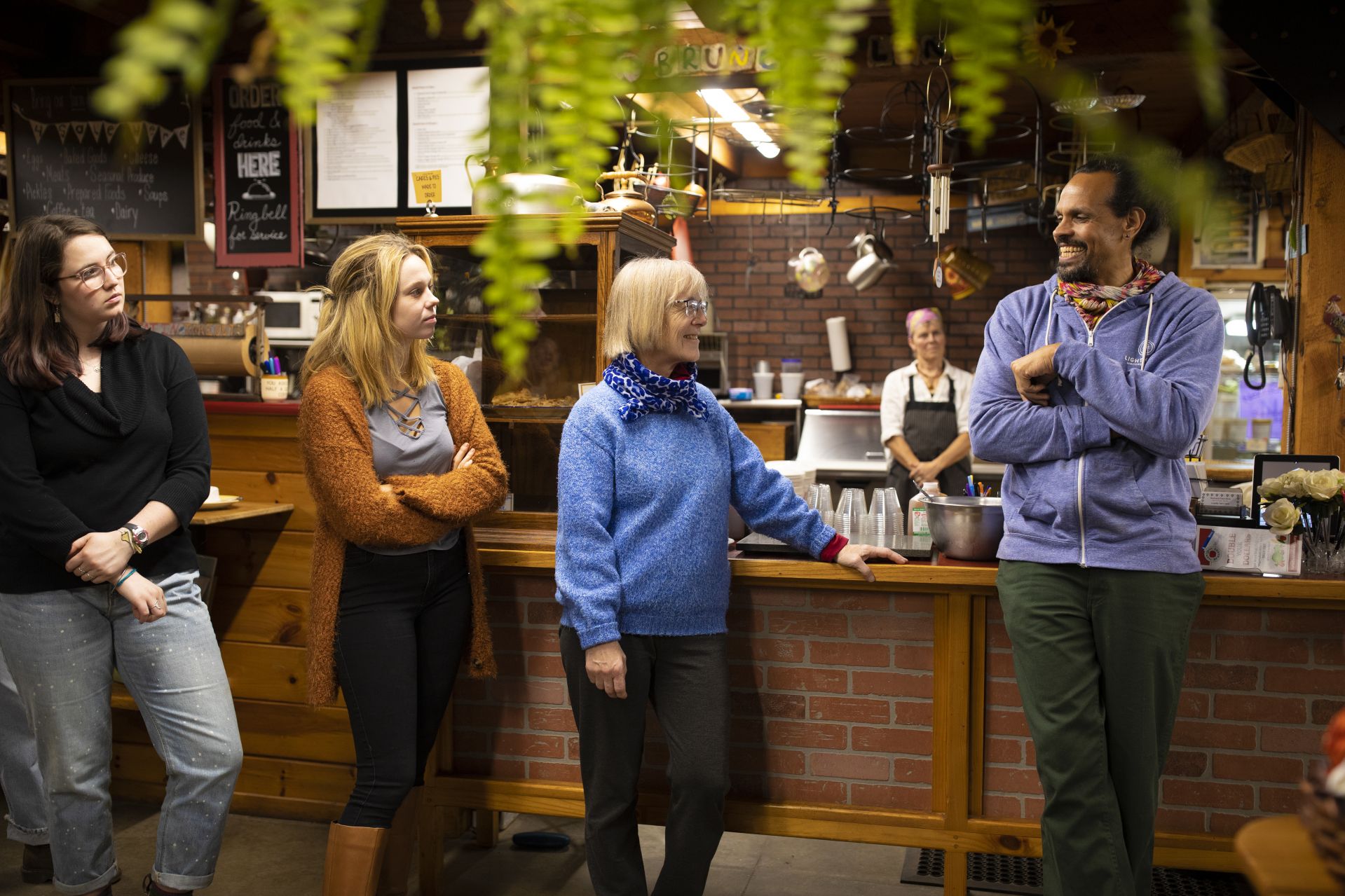 Nezinscot is a 250-acre organic farm that in recent years has diversified its offerings with a cafe, gourmet food shop, and bakery, among other ventures. By the time we’d arrived, the dairy cows had long since been brought in for their late-afternoon milking.

Gay said that he would like to hear us each share “something beautiful” we had seen in the past 24 hours.

We stepped from the crisp outdoors into a toasty space with warm lighting and an array of homemade cheeses, apple cider, and wine that had been laid out for us. Cats slunk around the perimeter, and a black Lab lounged in the corner. Like a typical New England farm store, the walls were lined with products like homemade jams, soaps, and yarn. The whole place smelled like baked goods.

Rounding us up, Jane Costlow, the Griffith Professor of Environmental Studies, asked us to introduce ourselves. Gay added that he would like to hear us each share “something beautiful” we had seen in the past 24 hours.

Perhaps because I had been talking with Costlow right before she offered the prompt, she asked me to kick off the introductions.

Panicking a bit, I told the group that pizza was the most beautiful thing I’d seen in the past 24 hours. When Gay, a noted food-justice advocate, asked if I had made the pizza myself, I abashedly admitted that it had, in fact, been from Dominos. (I like to think my reply bought time for others to be more eloquent.) And they were, responses varying from the sunset on the ocean in Acadia to the first signs of blossoms sprouting on a house plant. 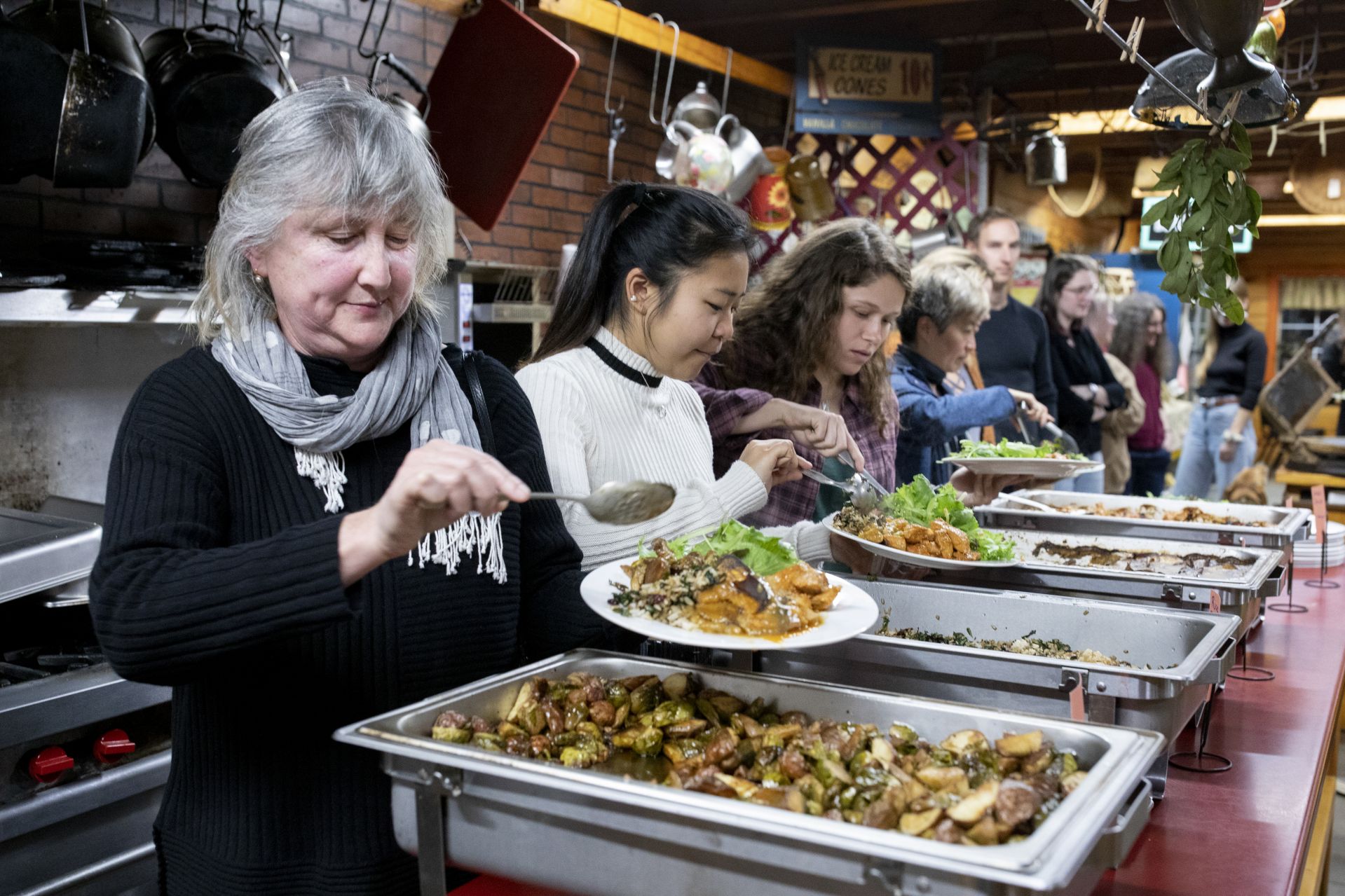 And dinner is served. Professor of English Lillian Nayder prepares her plate during a dinner at Nezinscot Farm in honor of Ross Gay, the 2019 Otis Lecturer. (Phyllis Graber Jensen/Bates College)

After introductions, we had time to wander the store, sample fresh cheeses, and catch up with our professors and fellow ES majors. I spoke with classmate Jesse Saffeir ’20, who spent her summer backpacking along the rights-of-way of power lines in Maine and writing poetry as she trekked for three months. Her project was funded by an Otis Fellowship, a program that complements the Otis Lecture to support Bates students’ explorations of the natural world.

Soon dinner was served: warm Brussels sprouts and baby potatoes tossed in a balsamic dressing; sweet potato and vegetable pot pie; a grain salad with kale and dried cranberries; and homemade bread and biscuits. We served ourselves buffet-style, then took our seats at a long wooden table in the back.

I sat near Gay and two fellow senior ES majors. We talked about our experiences working and living in different communities around the world. I had thought that a well-known academic coming to Bates to deliver a formal lecture might tend to talk about himself, but instead he was mostly curious about our academic journeys and thesis projects.

In response to his question, Sarah Delany ’20 explained how she spent the summer guiding in Montana’s Glacier National Park, and how the experience has influenced her thesis, which will explore gender dynamics among alpine guides.

As large dinners do, the conversation switched to a full-table discussion, with Costlow proposing the topic: What do environmental studies students want and need from the ES program?

Quite a lengthy conversation followed. We talked about Bates’ role as an academic institution, and how that can sometimes complicate and even restrict the type of coursework that a professor can offer. 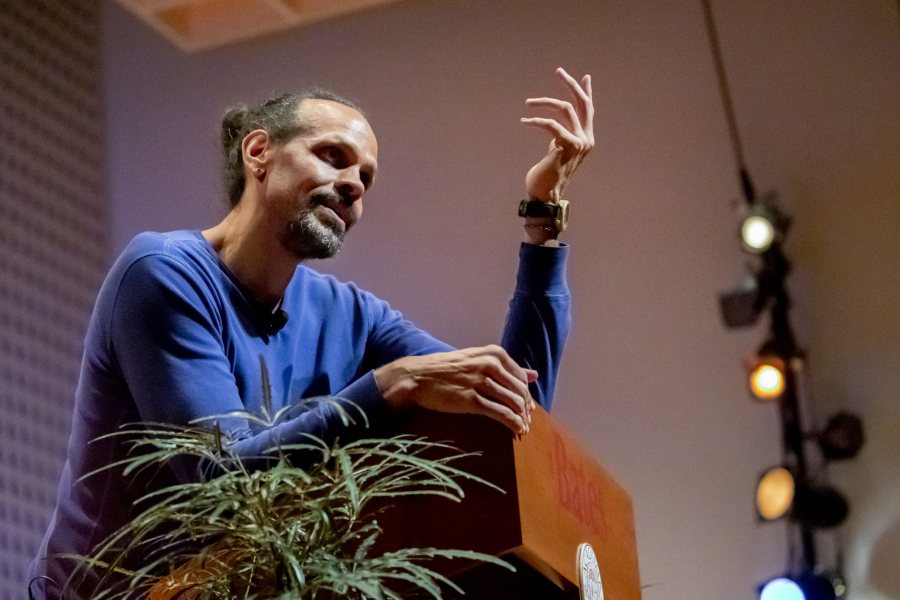 We talked about what it meant that a Bates environmental studies major might graduate not knowing how to till soil or plant a tree. The ES program is preparing for a regular review next year, and it was exciting to hear our professors passionately talk about what they could do to make class time more interesting and impactful for their students.

For his part, Gay was curious about Short Term, and how it gives students a chance to learn outside-the-classroom, hands-on skills — skills he believes are crucial to learning.

It’s rare to see our professors in a casual setting like Nezinscot, talking candidly with each other and challenging one another’s ideas.

Throughout these discussions, Gay seemed fully present and comfortable, just as he had been during his campus visit, whether playing basketball with physics professor John Smedley in Alumni Gym before his talk, or laughing along with his Olin Concert Hall audience while sharing his humorous essays.

The dinner conversation was a far cry from our usual interactions with our professors, which are often in an academic setting in a classroom: one professor speaking with a class of 10 or more students. While we do get one-on-one time with professors, often during office hours, it’s rare when the numbers of professors and students are almost equal. 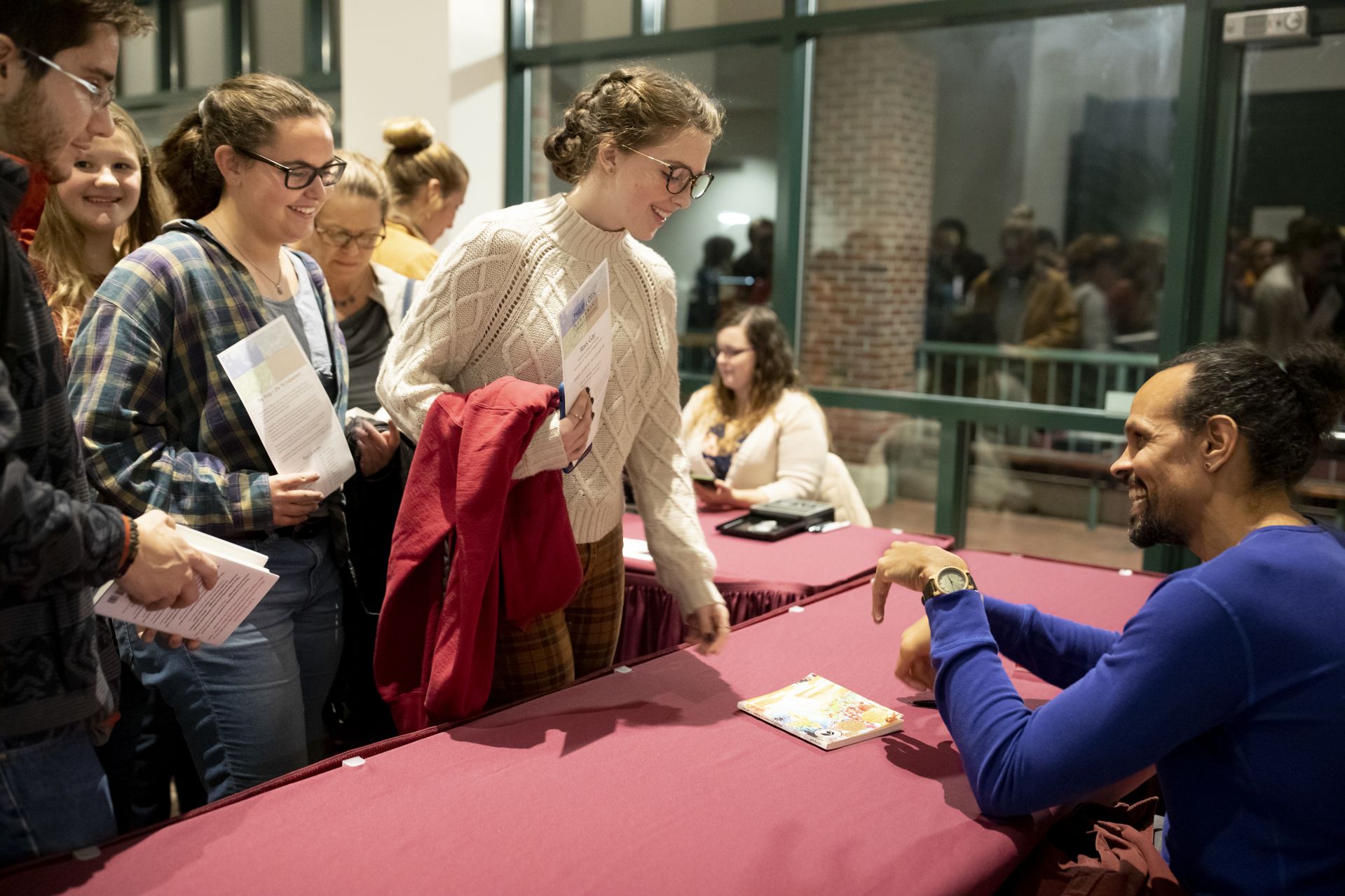 After his lecturer, Ross Gay meets students during a book-signing session in the Olin lobby. (Phyllis Graber Jensen/Bates College)

It’s also rare to see our professors in a casual setting like Nezinscot, talking candidly with each other and challenging one another’s ideas. But it does happen, and it’s what a small college like Bates can offer.

I’m sure that our group could have dined together at one table back on campus, but I imagine we would have felt pressure to participate in an intensely academic dialogue, as opposed to the free-flowing conversation that transpired on Sunday night.

Conversations continued over dessert: hot apple crisp with fresh whipped cream. I visited the wall of loose-leaf tea; fellow students and I had fun mixing flavors of herbs and flowers in ceramic mugs.

Gay told us about a community orchard he has back home in Indiana, where he’s a professor of English at Indiana University, and how it simultaneously provides sustenance and recreation for those in his community. We talked about whether a community orchard would be possible in Lewiston.

I rode back to Bates with Carissa Aoki, a lecturer in environmental studies, and with three fellow ES majors. By then it was almost 9 o’clock, and we were tired and full but excited about the night.

We talked about how we could create more such events, bringing our department together over local food and local places, reshuffling the usual.