It was autumn until suddenly it wasn’t, when winter reared its head for a moment or two in November.

But as much as we love the change of seasons, we’re more than just the weather. Therefore, we offer to you the usual but hard-to-believe-all-that-happens-here selection of moments.

Thanks for taking the time to look and appreciate This Month at Bates.

On the Steps of Hathorn 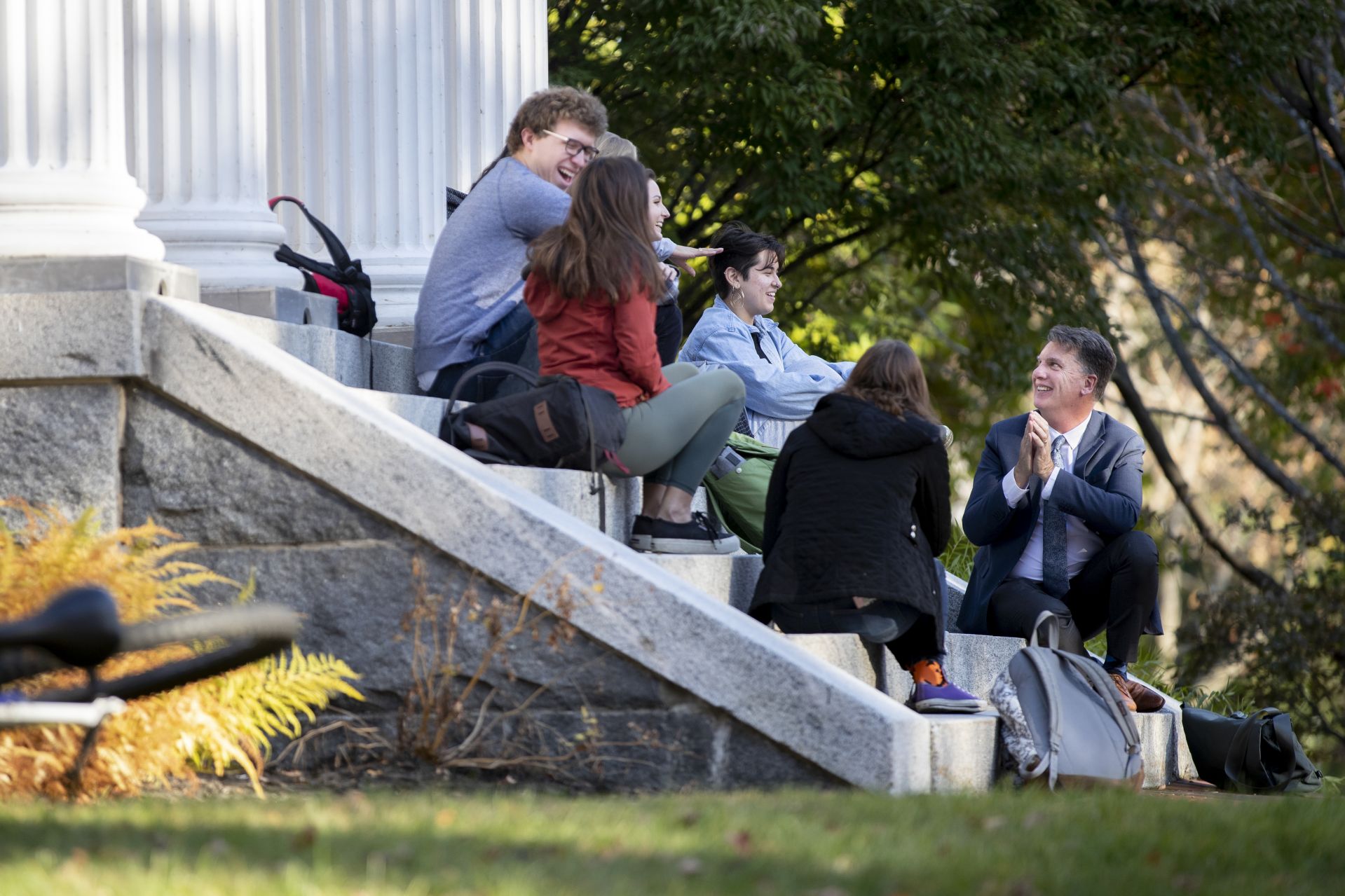 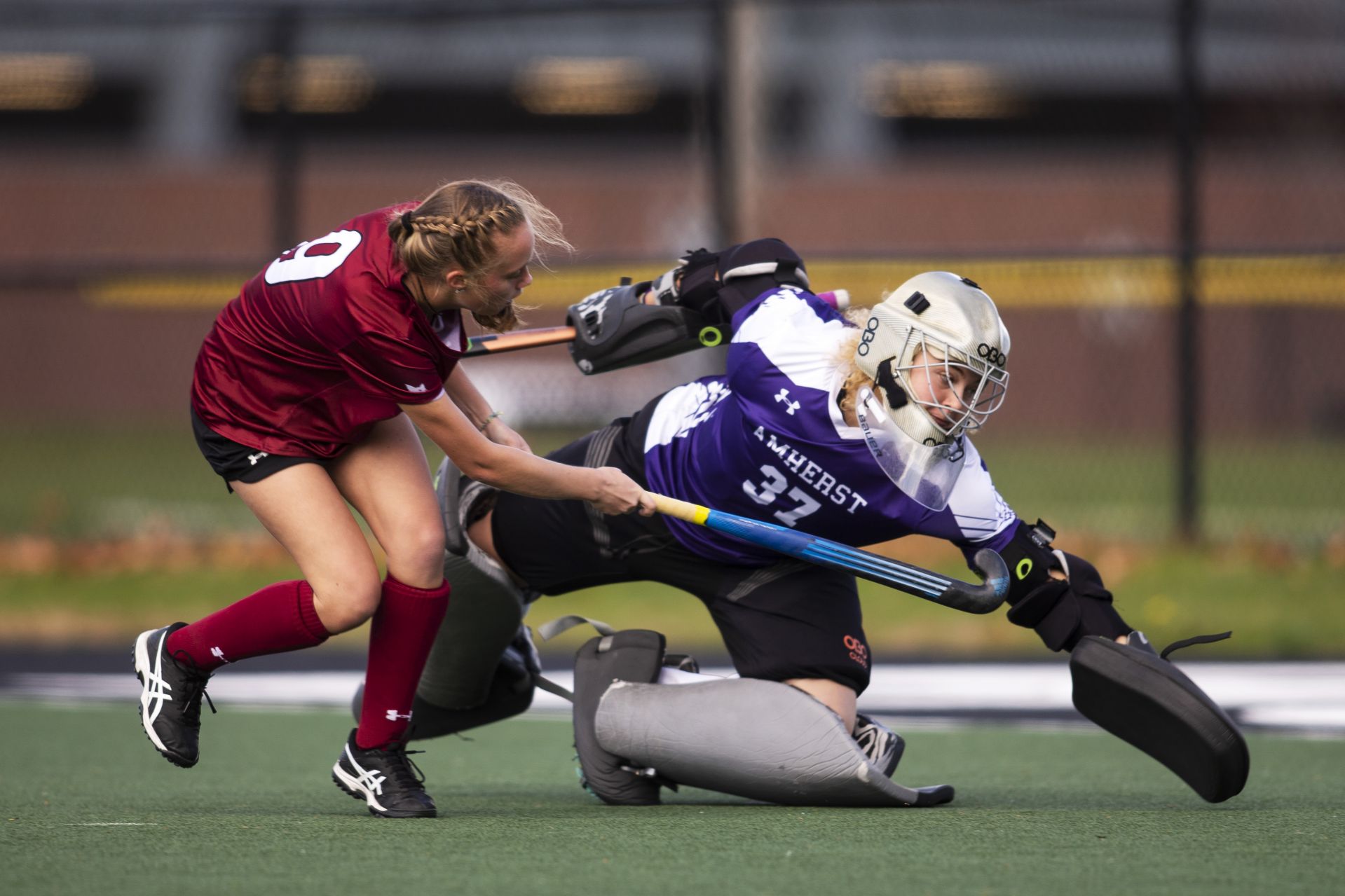 Sarah Bussell ’23 of Mohegan Lake, N.Y., beats the Amherst goalie to tie the game at 2, en route to a 3-2 Bates victory. The Bobcats finished the season with a 6-4 NESCAC record. 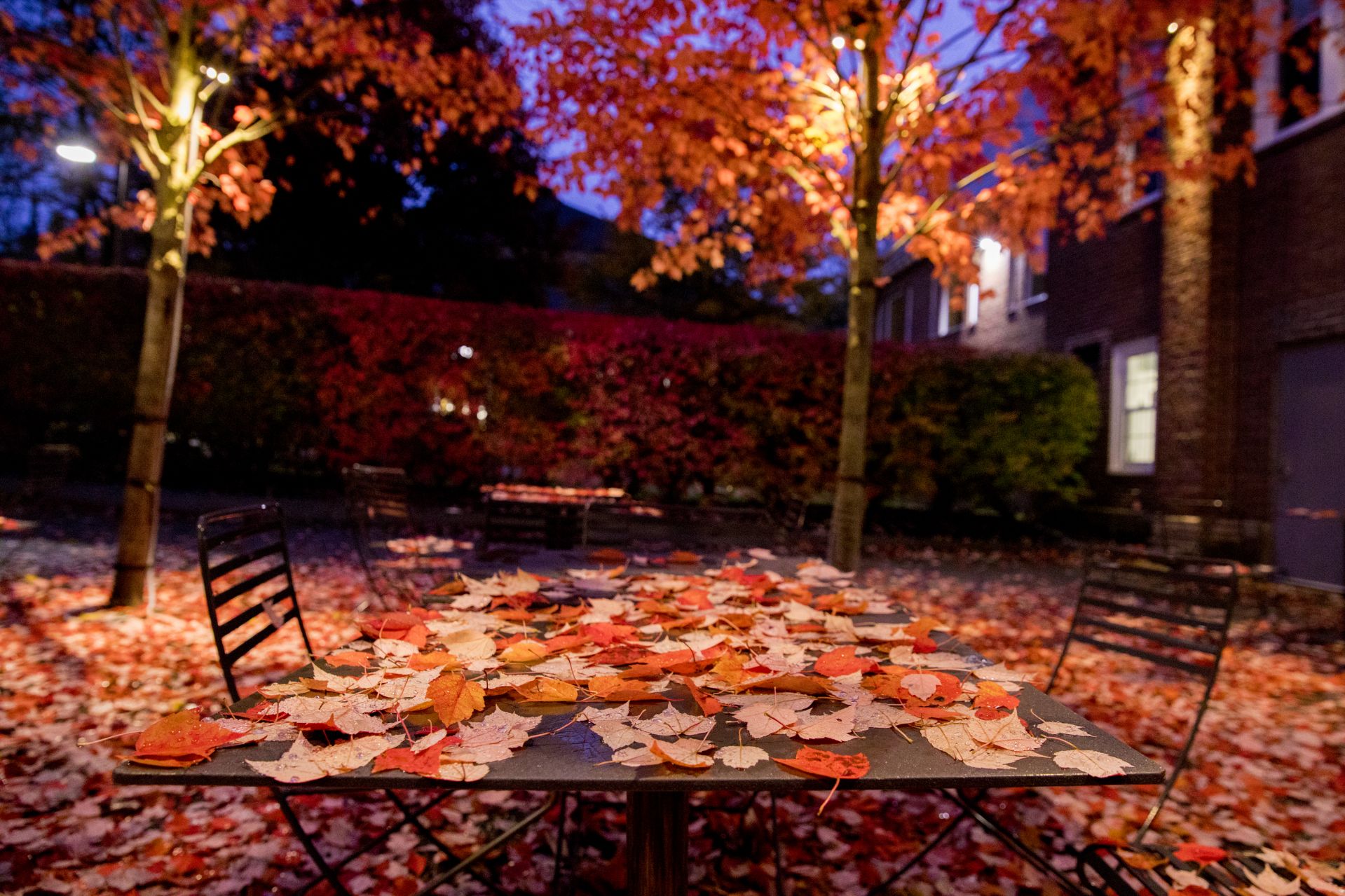 Colorful leaves bring something extra to the table on the Den patio, where on some late-October days it was warm enough to dine outside. 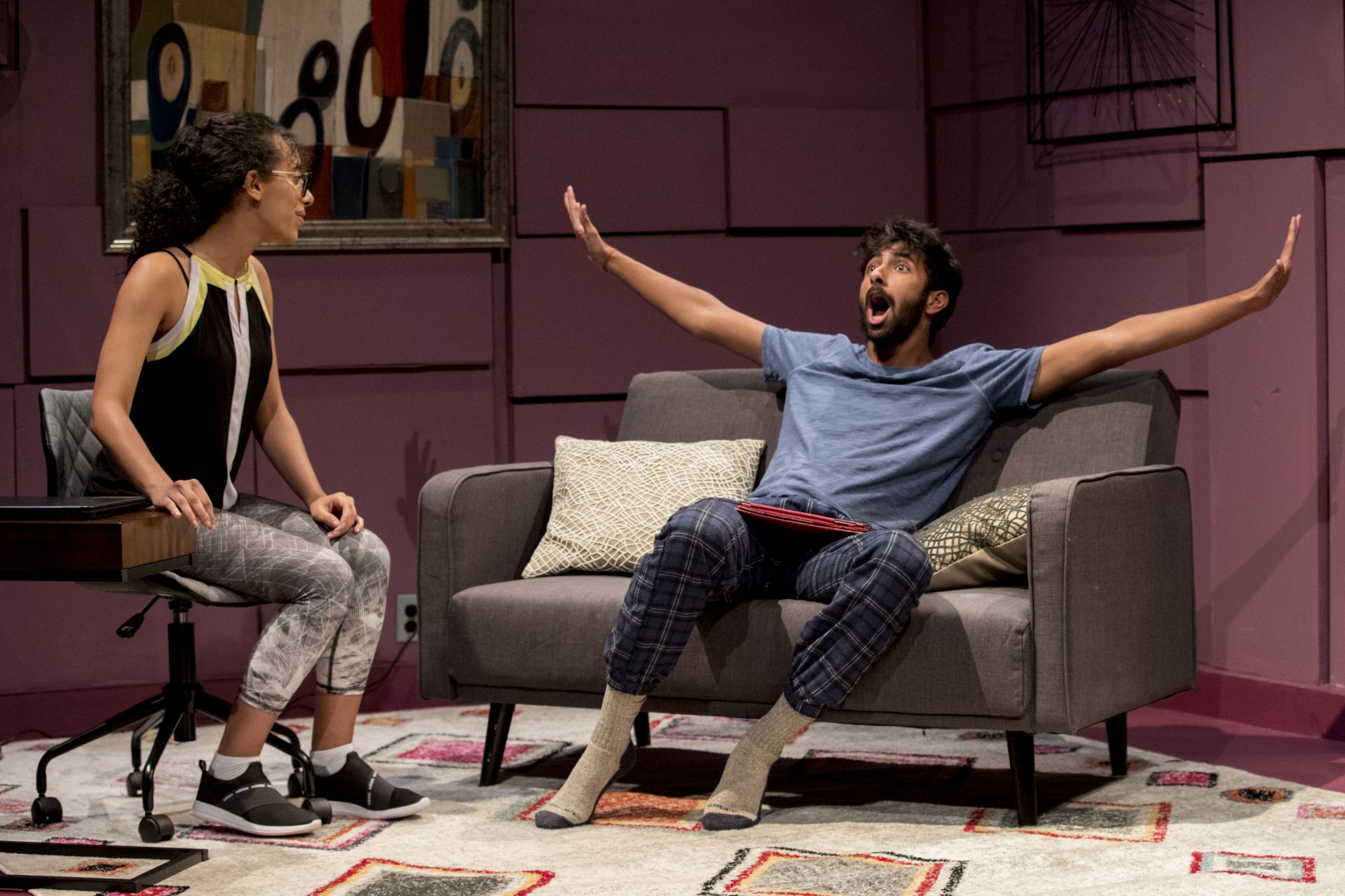 In a vignette called “Uh-Oh” during the mainstage production of Love/Sick, Sarah (Emily Diaz ’23 of Corona, N.Y.) provokes a response from husband Bill (Rishi Madnani ’23 of Langhorne, Pa.). In a sense, John Cariani’s play “is about disposability in relationships,” says director Martin Andrucki, Dana Professor of Theater.  “Everything is always on the verge of coming apart and ending.” 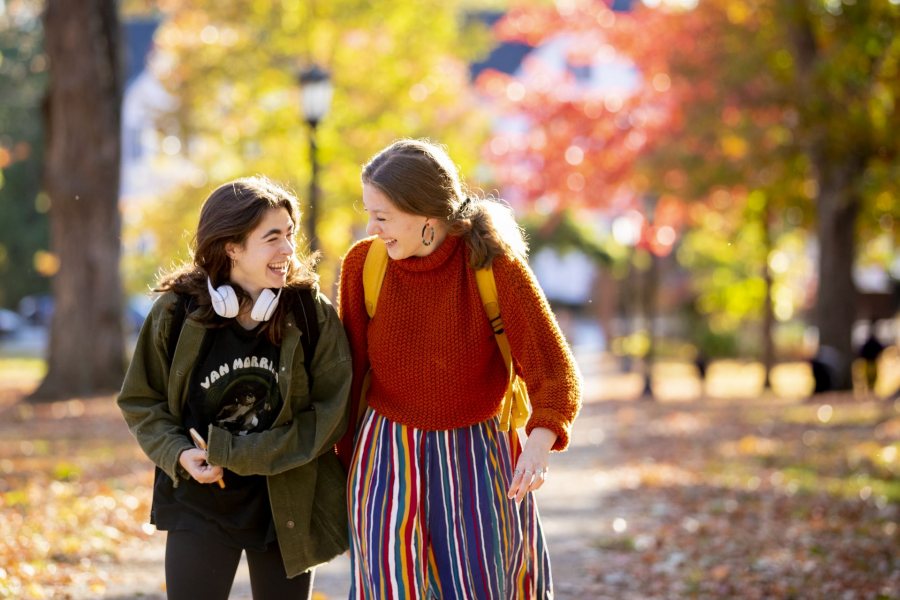 Chloe Warshaw ’23 of Westwood, Mass., and Ilana Rosker ’23 of Lexington, Mass., enjoy a chance encounter on the Historic Quad before parting ways for their afternoon classes. 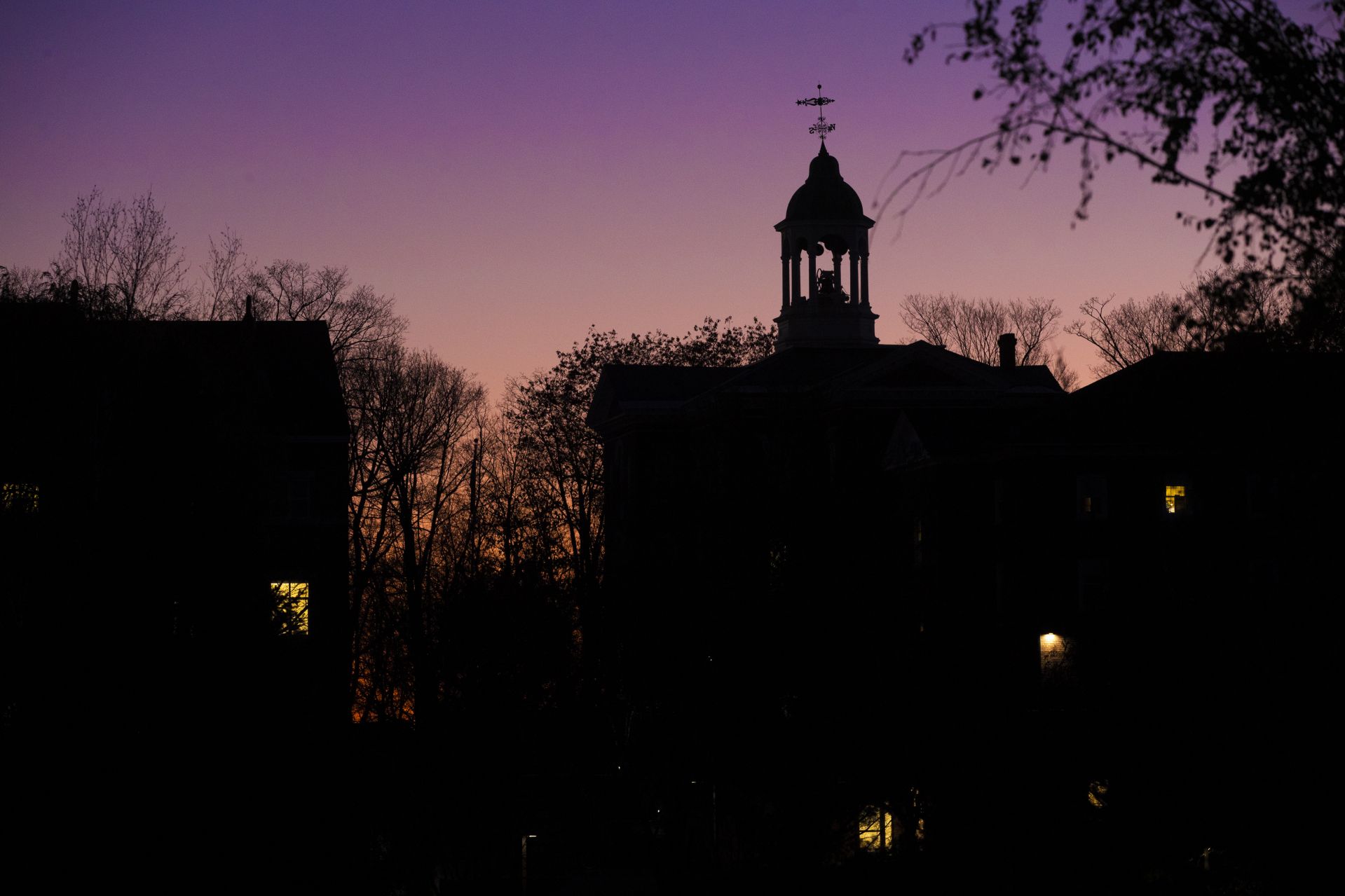 A few lights keep shining in Lane and Pettengill halls as the sun sets behind Hathorn Hall. 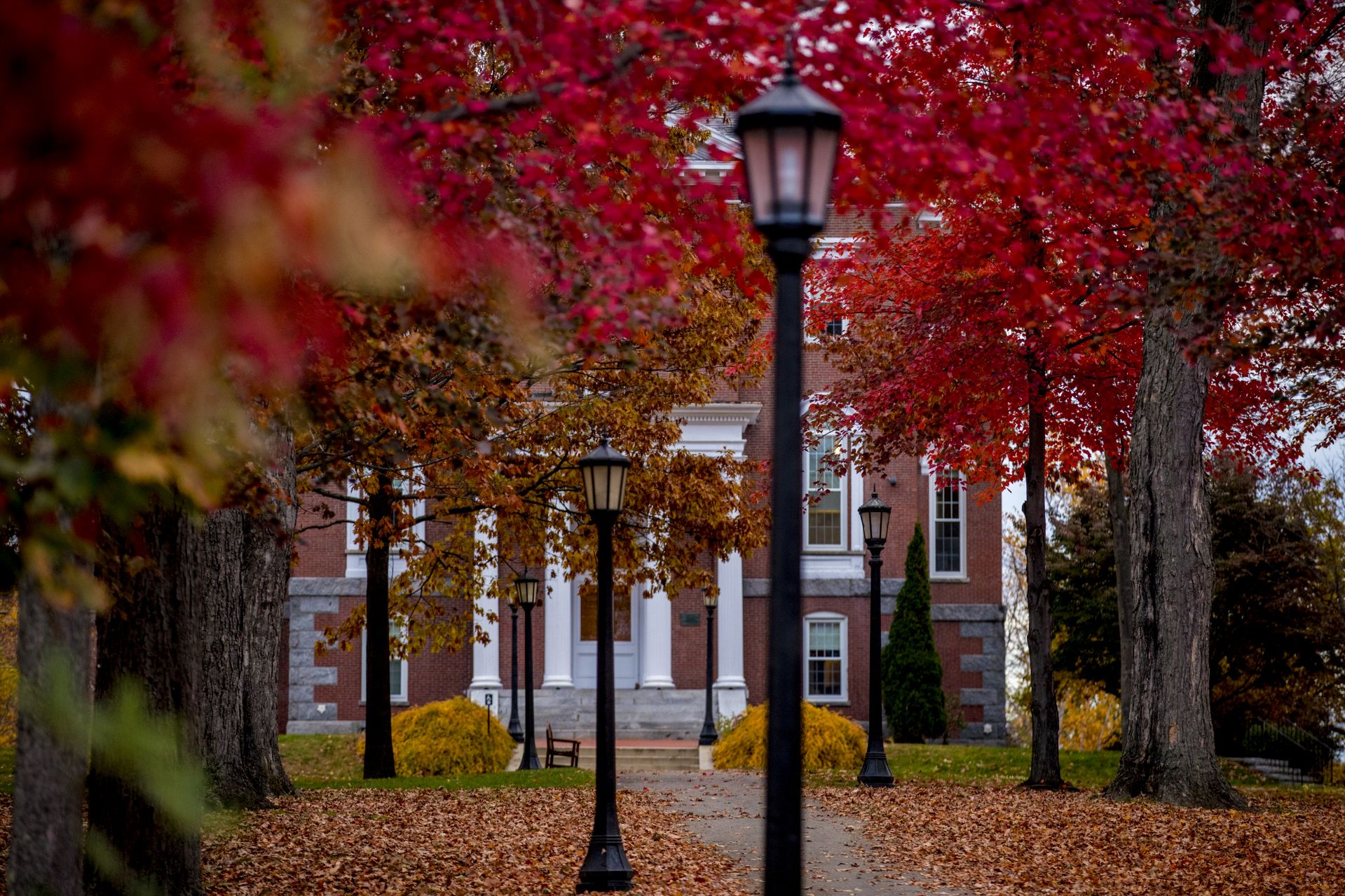 On a Sunday morning, overcast skies enhance the saturation of fall foliage. 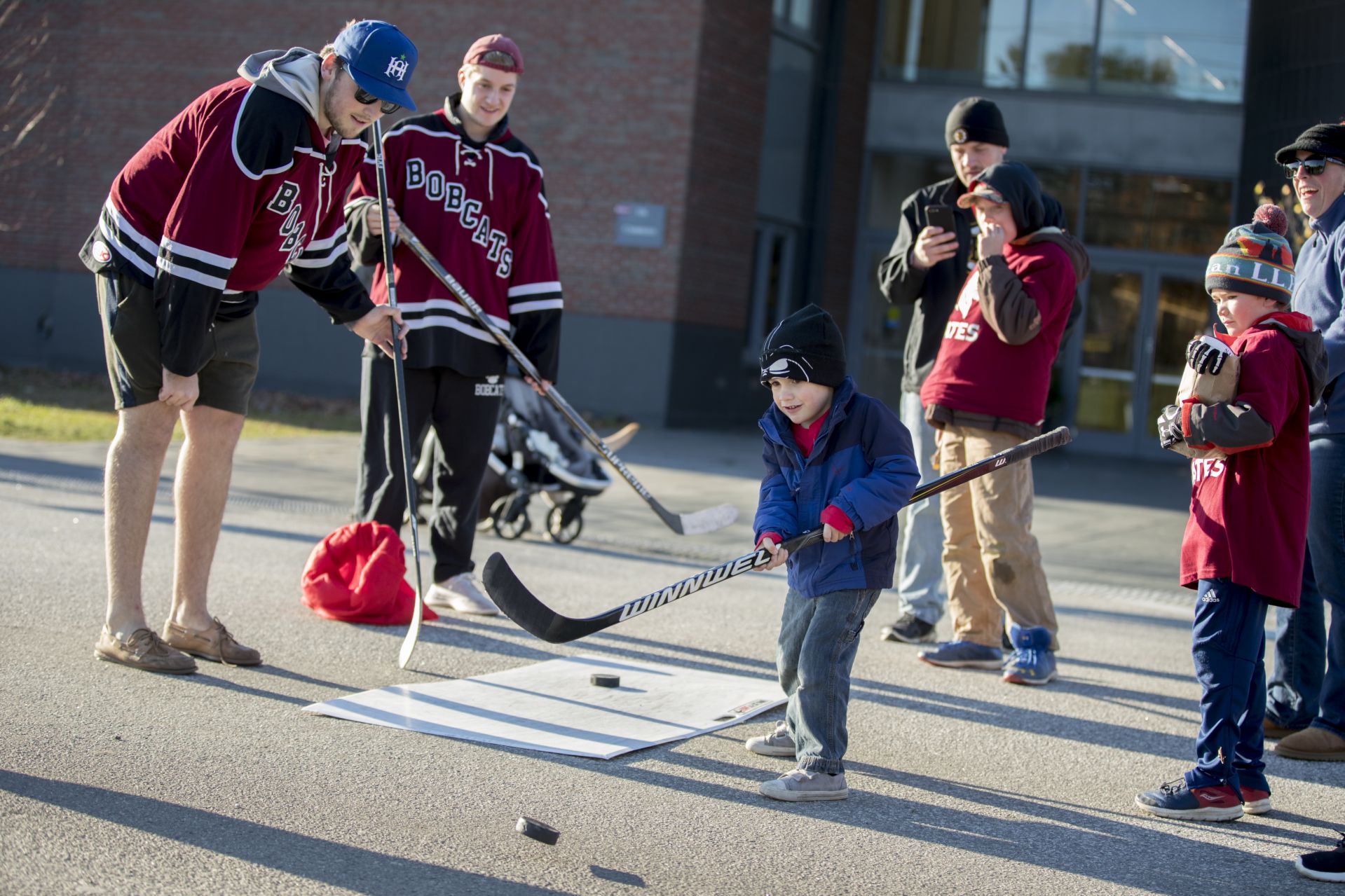 Men’s hockey club members Michael Hartnett ’20 (left) of St. Paul, Minn., and Sam Gutch ’22 of Brunswick, Maine, cheer the stickhandling of young D.J. Thibodeau. The Thibodeau family and many others turned out on Nov. 2 for the ’Cats Carnival celebration, sponsored by Bates Athletics and held before the football team hosted its first-ever night game, vs. Bowdoin. 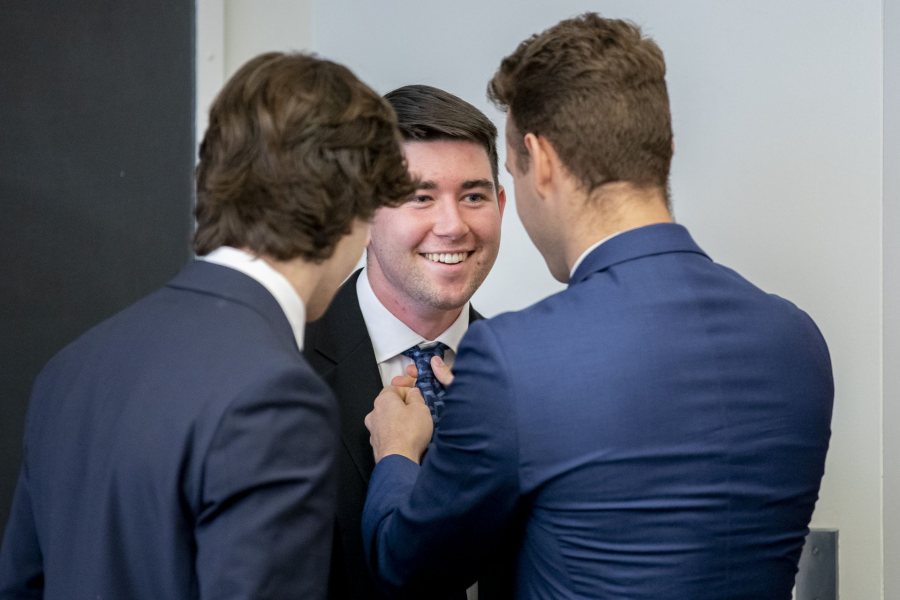 During a practice session for their College Fed Challenge trip to Boston, James MacDonald ’20 of Quincy, Mass., gets his tie straightened by teammates in a Pettigrew Hall classroom. For the course “Central Banking and the College Fed Challenge,” taught by Visiting Assistant Professor of Economics Michael Osei, the Bates team traveled in early November to the Federal Reserve Bank of Boston, where they presented an analysis of the economy — prepared by the entire economics class — to a panel of judges. 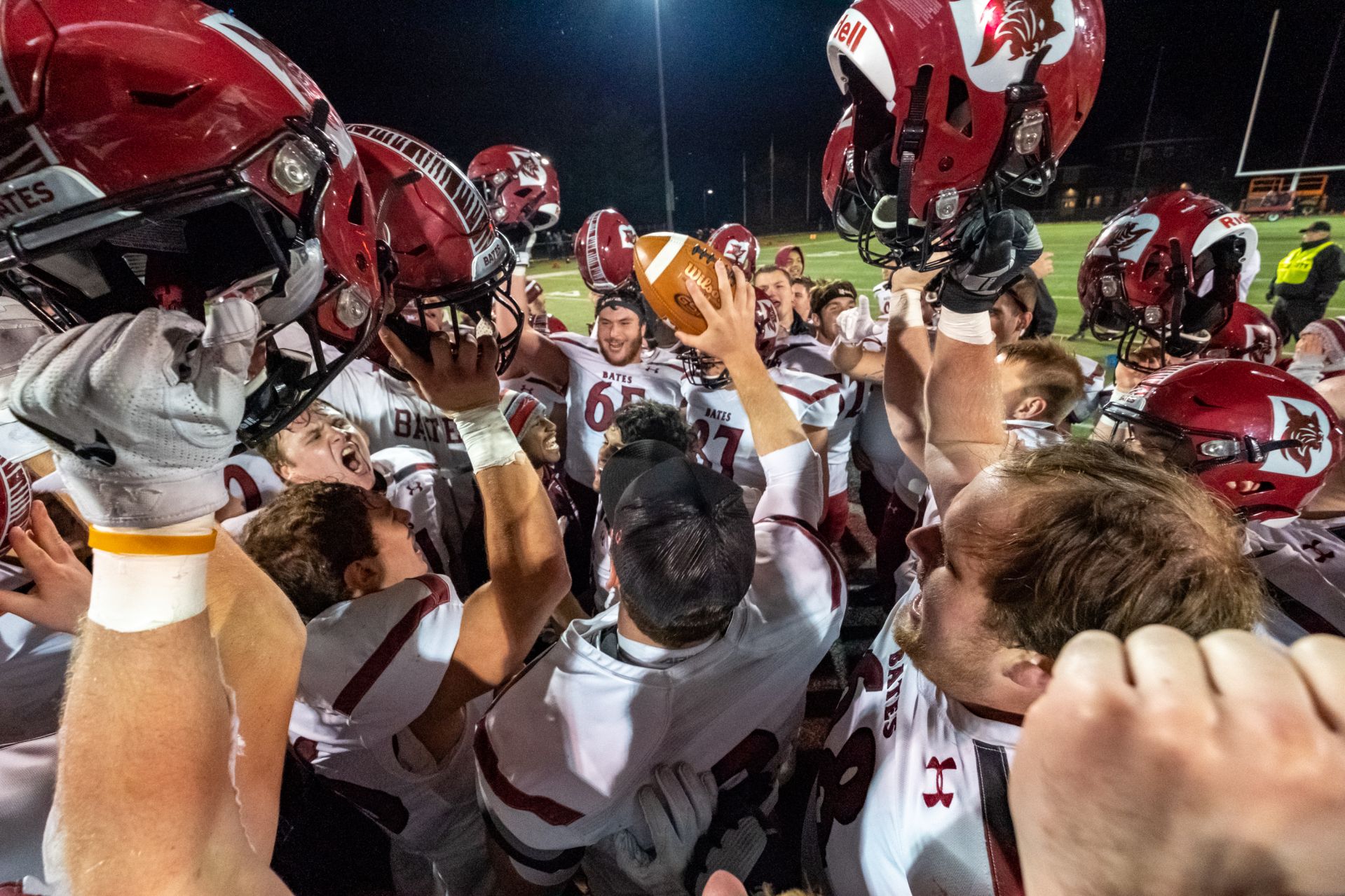 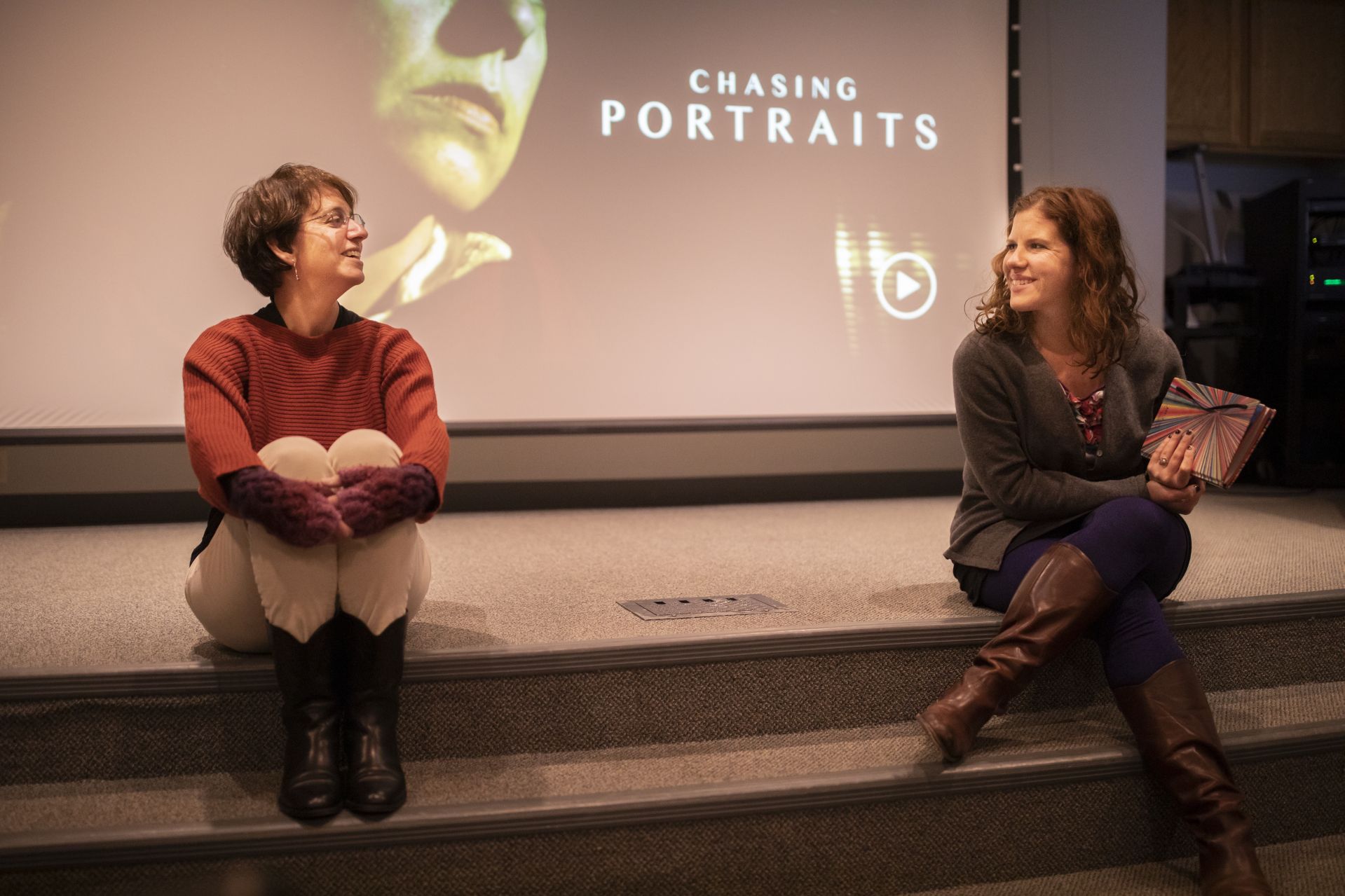 Assistant Professor of Spanish Stephanie Pridgeon (right) welcomes author and filmmaker Elizabeth Rynecki ’91 for a post-screening discussion of Rynecki’s film, Chasing Portraits, a documentary of her quest to find the lost art of her great-grandfather, killed during the Holocaust. Rynecki returned to campus to participate in the 2019 Bates Film Festival. 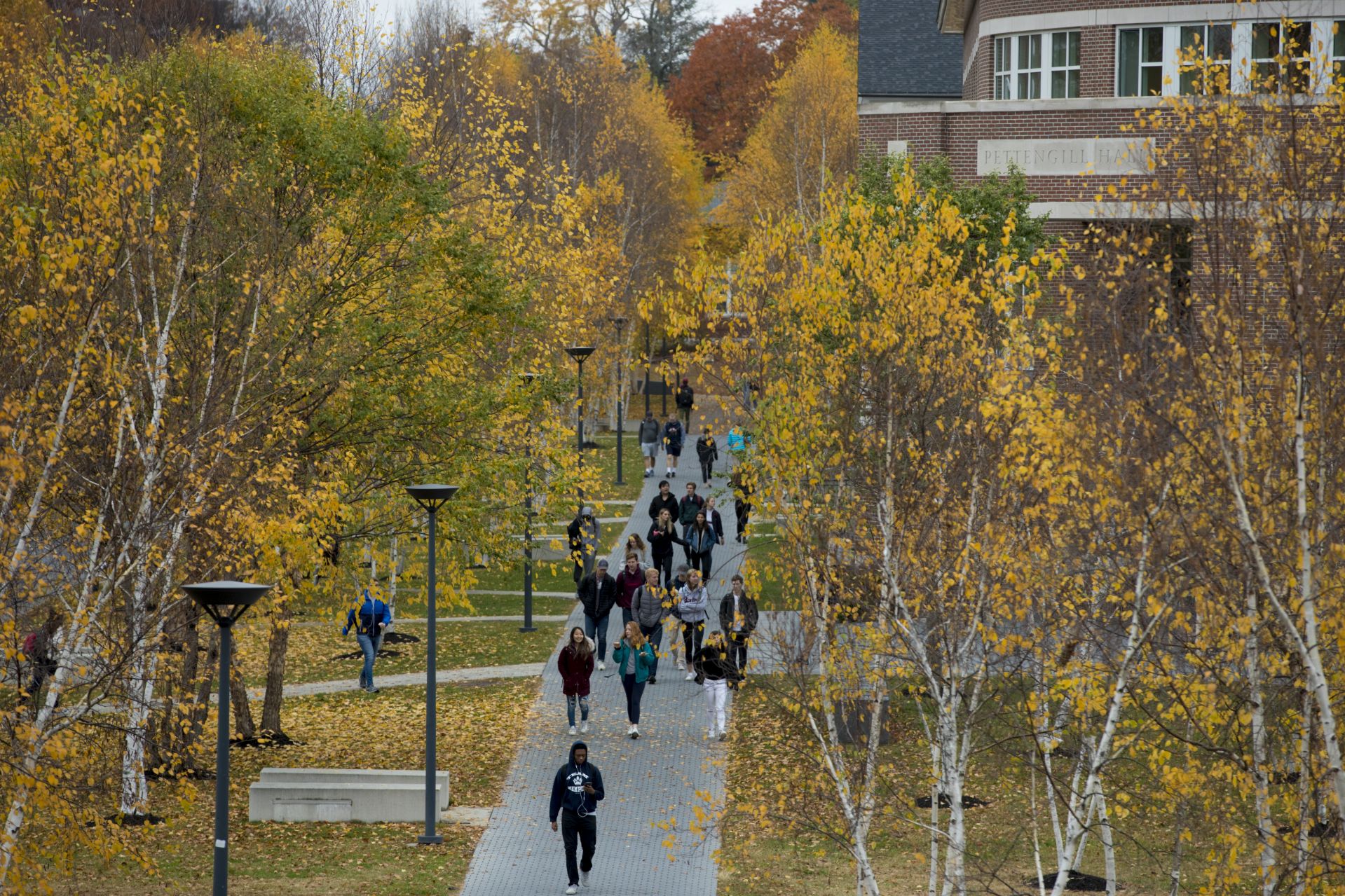 Beneath bending birches turning from green to yellow along Alumni Walk, students head to Commons for lunch.

Through the Looking Glass 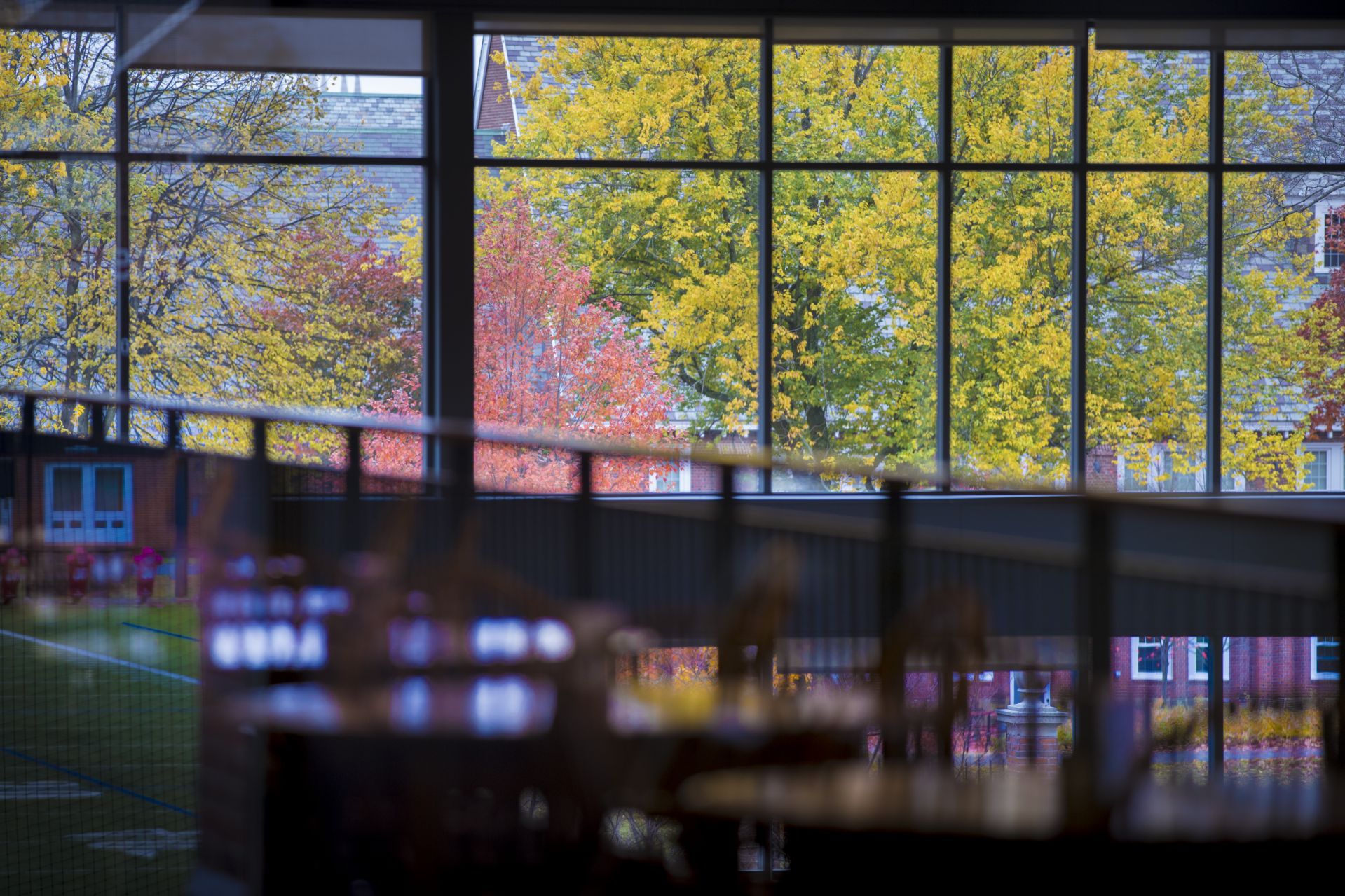 Myriad reflections double the color in this view from inside Commons looking out toward Chase Hall, with windows providing a bonus reflection of Garcelon Field, in the opposite direction. 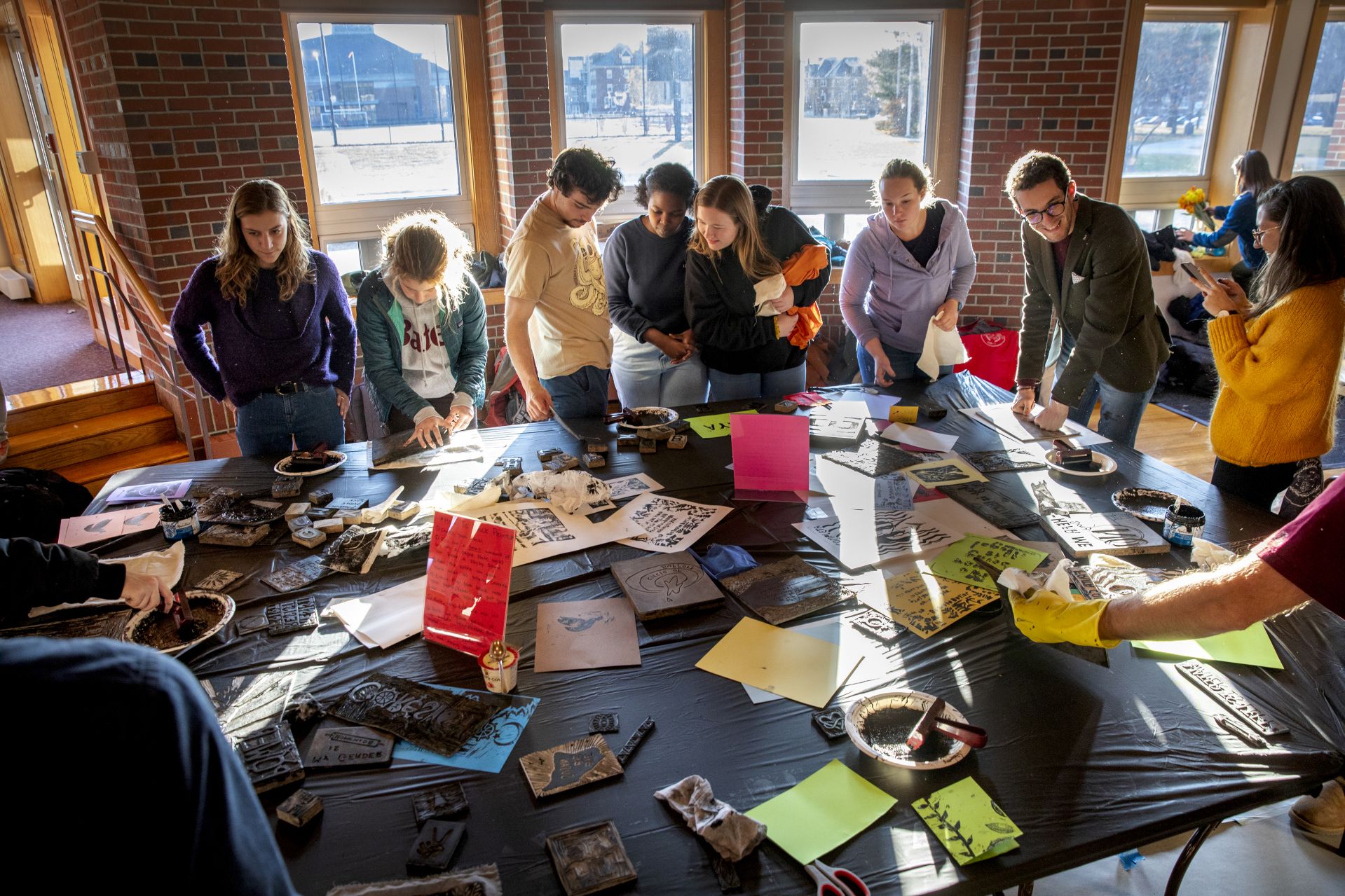 In November, about 100 students took part in the afternoon-long “Free Press Bates,” an annual social-justice printmaking event sponsored by the Office of the Multifaith Chaplain and held in the Benjamin Mays Center. 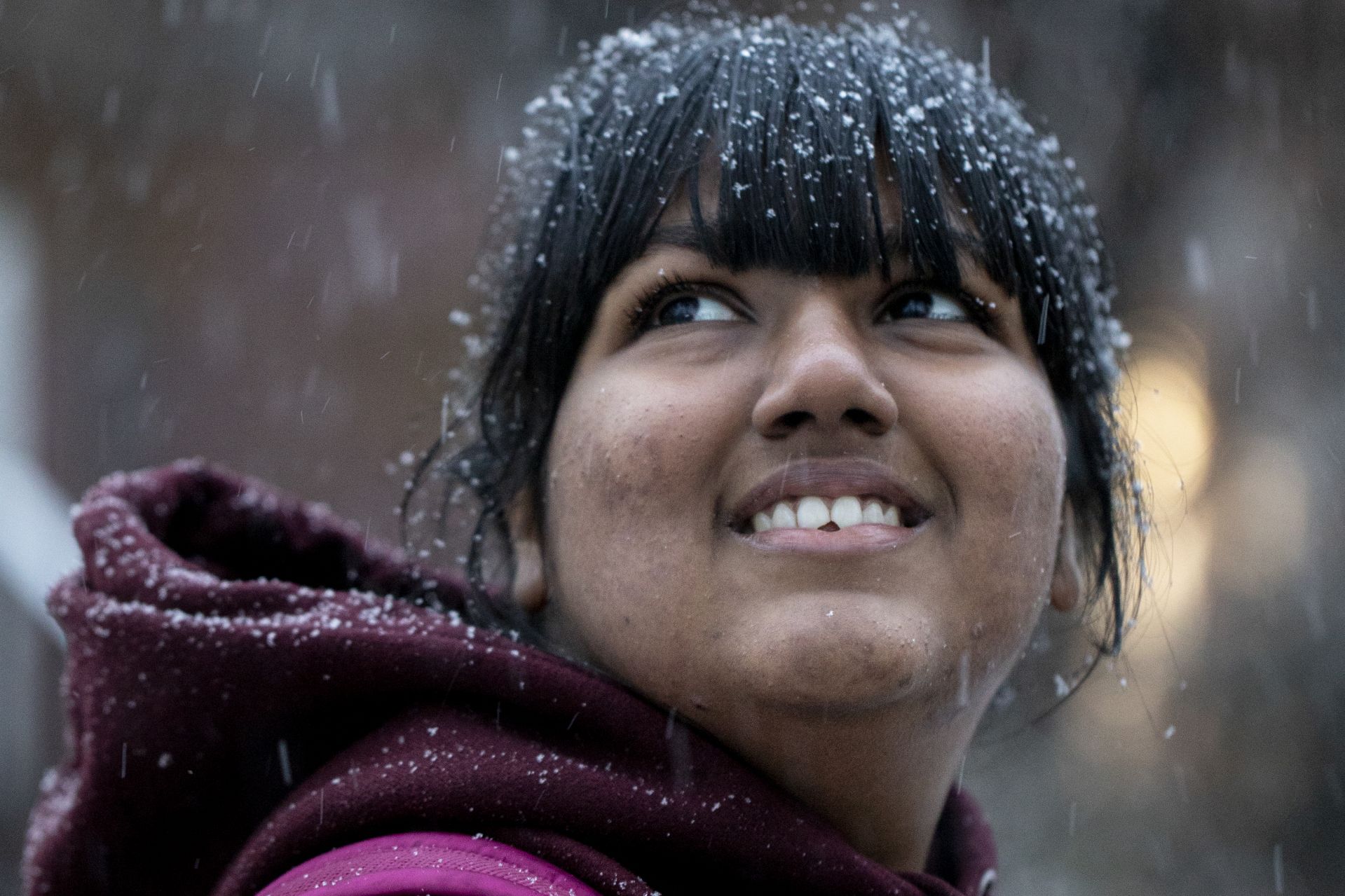 “It’s magical,” says Khushi Choudhary ’23 of Kolkata, India, who pauses on the Historic Quad during the season’s first snow to experience her first snowflakes. 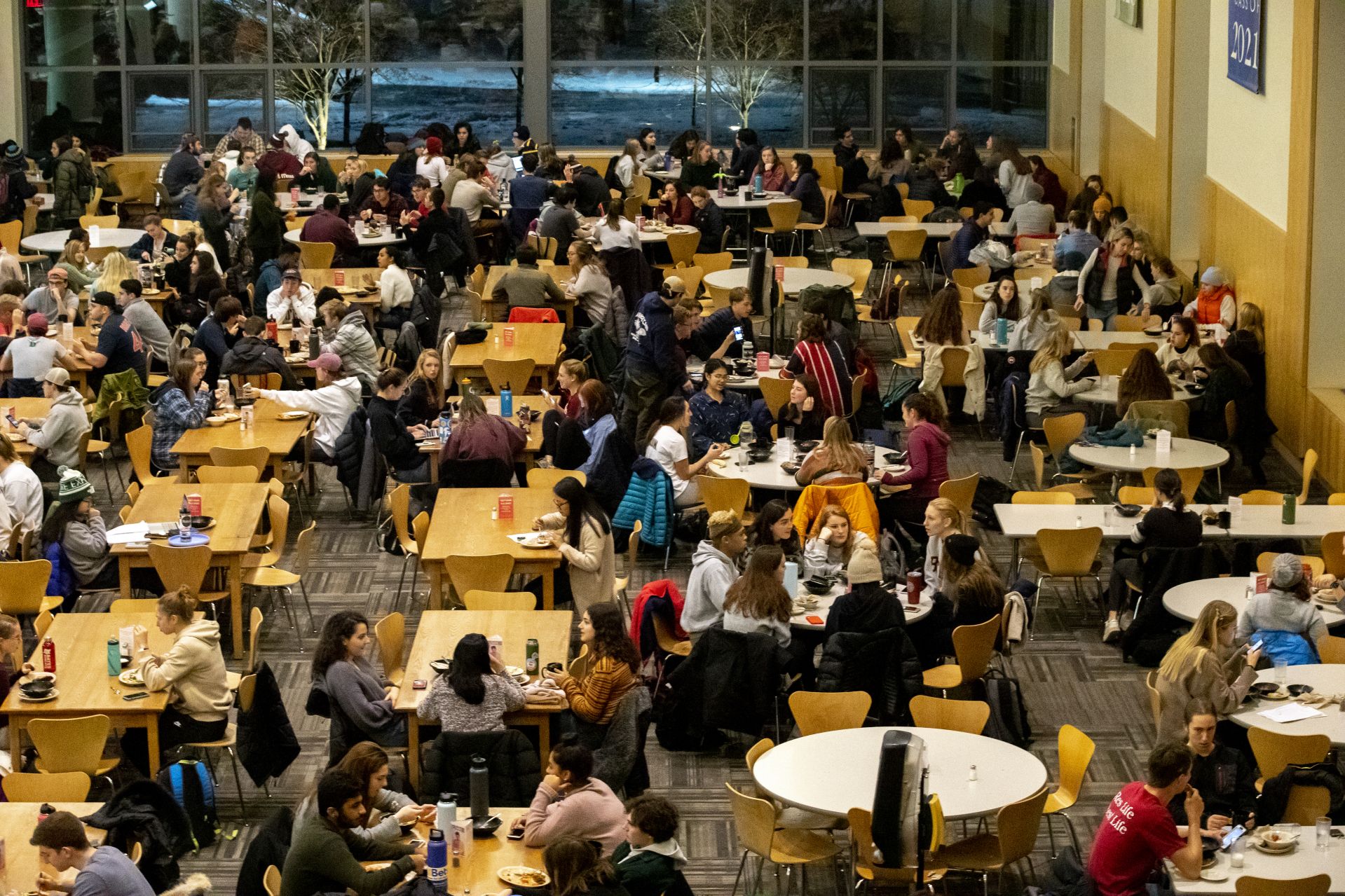 At Commons at dinnertime, every table seems to be having a lively conversation. 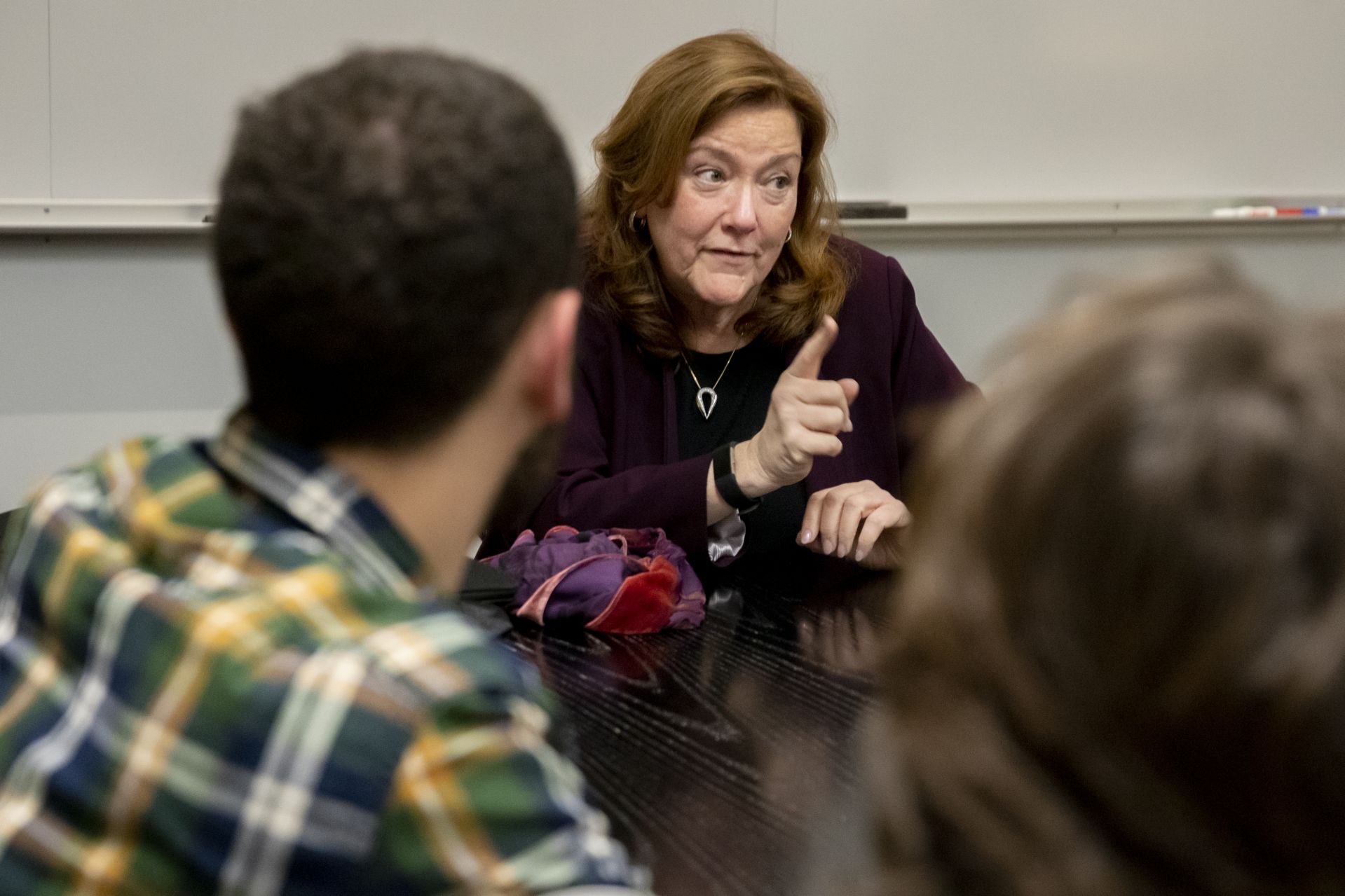 Before an evening talk, Leigh Ingalls Saufley, chief justice of the Maine Supreme Judicial Court, dined in Commons with Bates students interested in the law, including Max Gardner ’20 of New York City (front left). Gardner was struck by Saufley’s observation that, although Maine has one of the lowest U.S. incarceration rates, many who are sent to prison would be better-served by restorative justice or mental-health treatment. Gardner says he’s now “even more excited to pursue law as a means to do the most good.” In her talk, sponsored by the Harward Center, Saufley discussed the challenges of assuring stability of access to justice in a rapidly changing world. 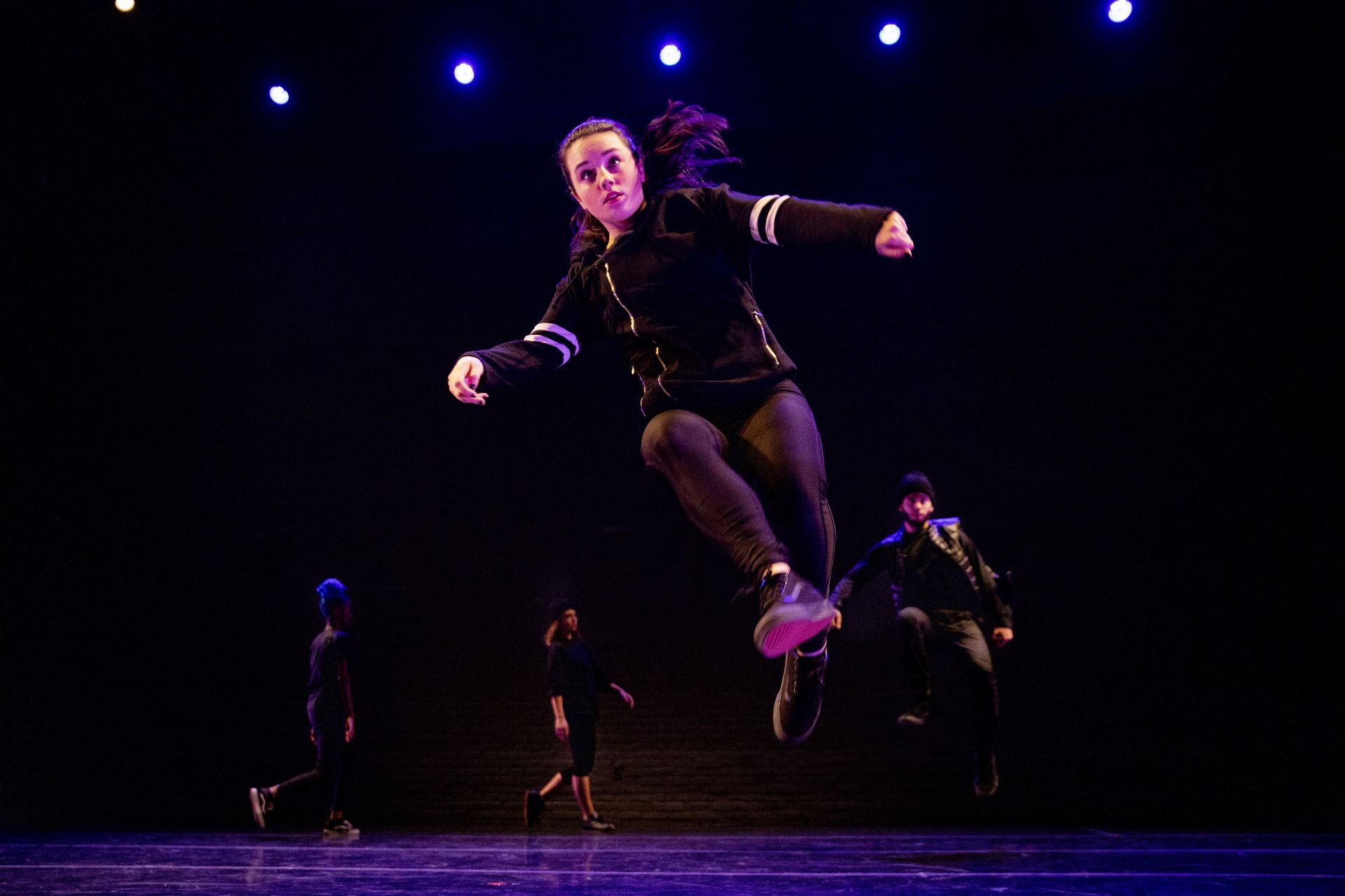 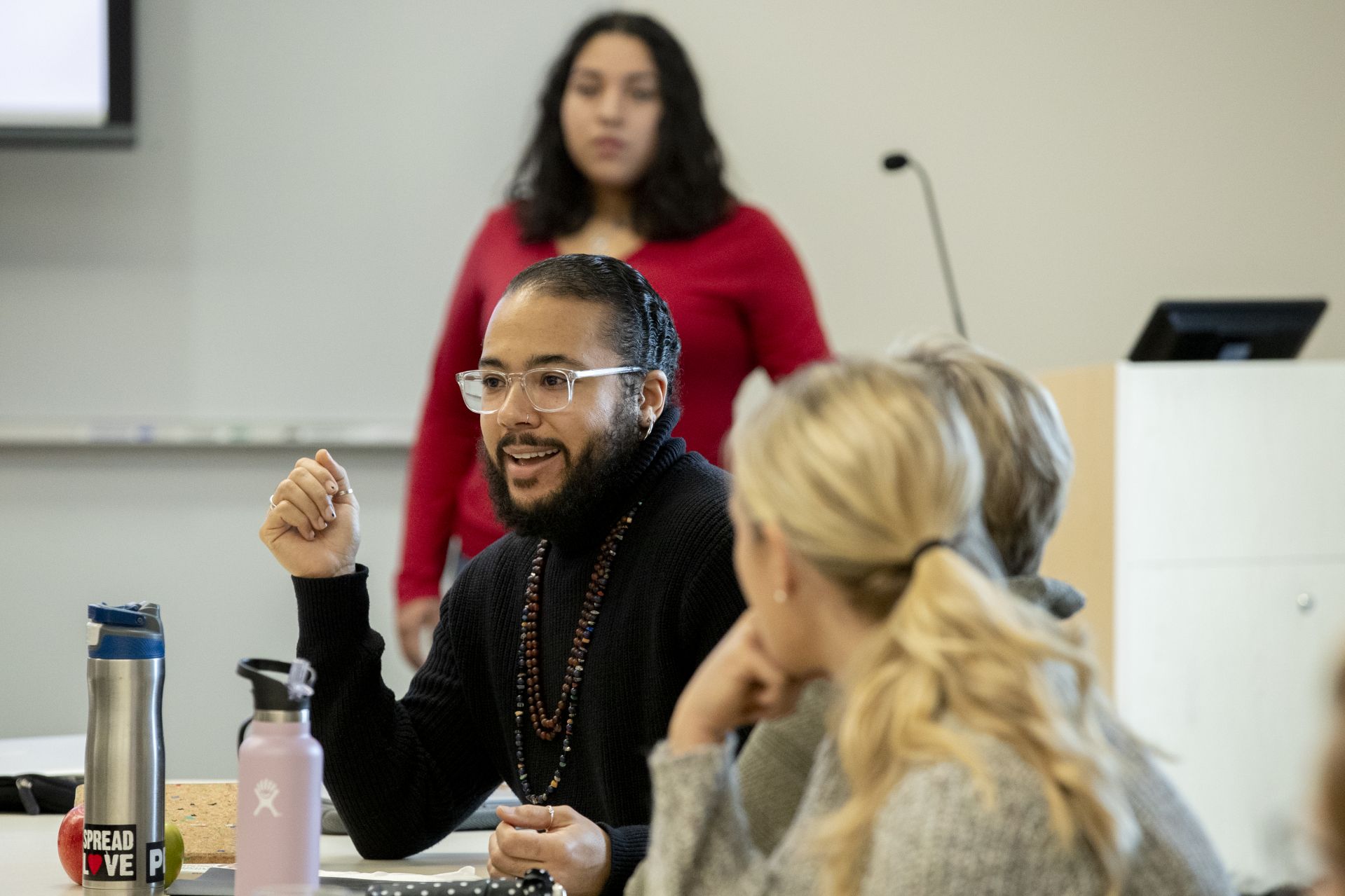 “Resilience means honoring the happiness that is part of trans life,” says Assistant Professor of Gender and Sexuality Studies Ian Khara Ellasante during a discussion held to recognize Transgender Day of Remembrance and Resilience, the annual commemoration of people lost to transphobic violence.

Another Opening, Another Win 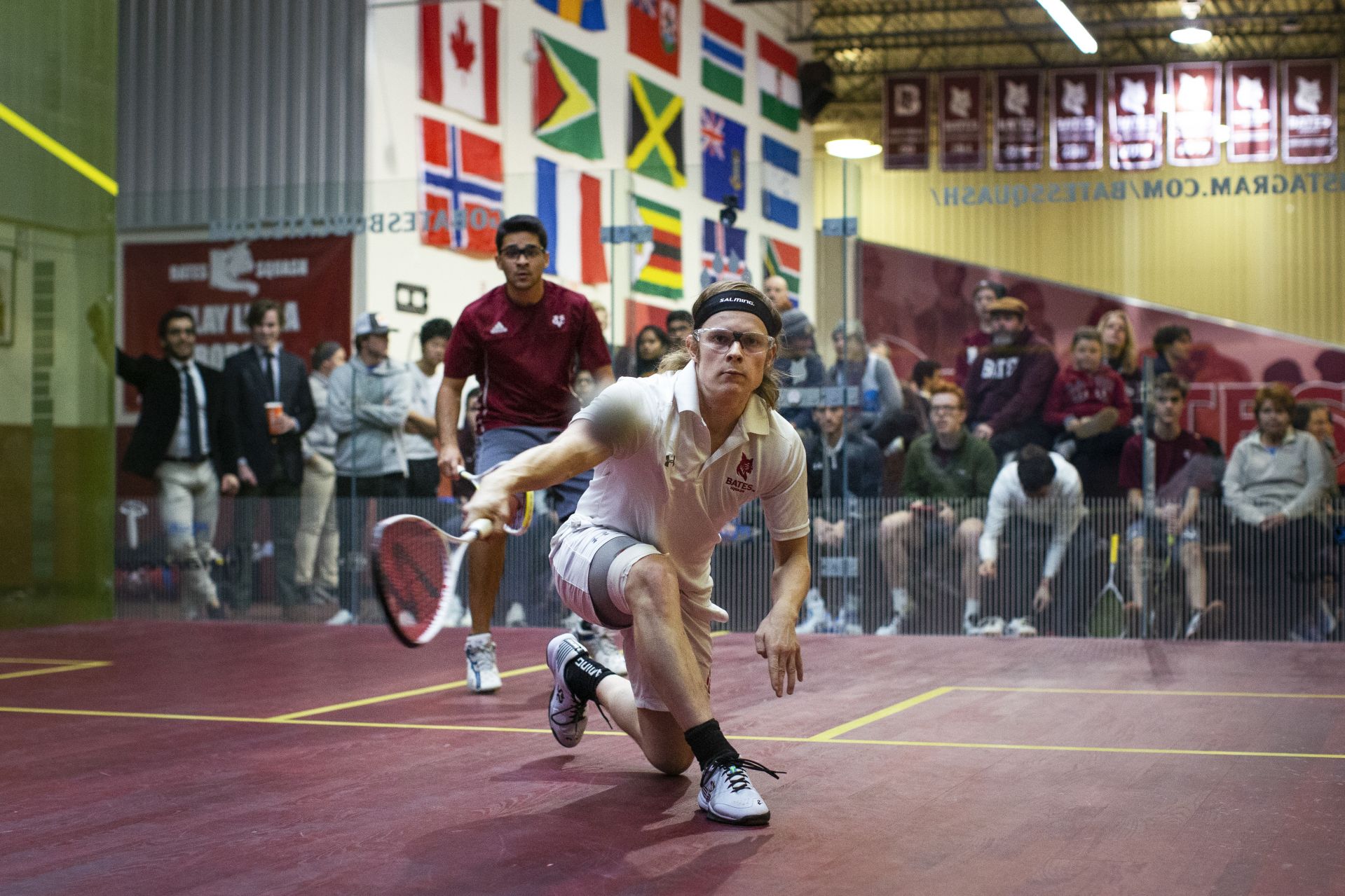 Jesper Phillips ’22 of Moss, Norway, swept his opponent at the No. 2 position as both the men’s and women’s squash teams defeated Vassar 9-0 in the Bobcats’ home openers. 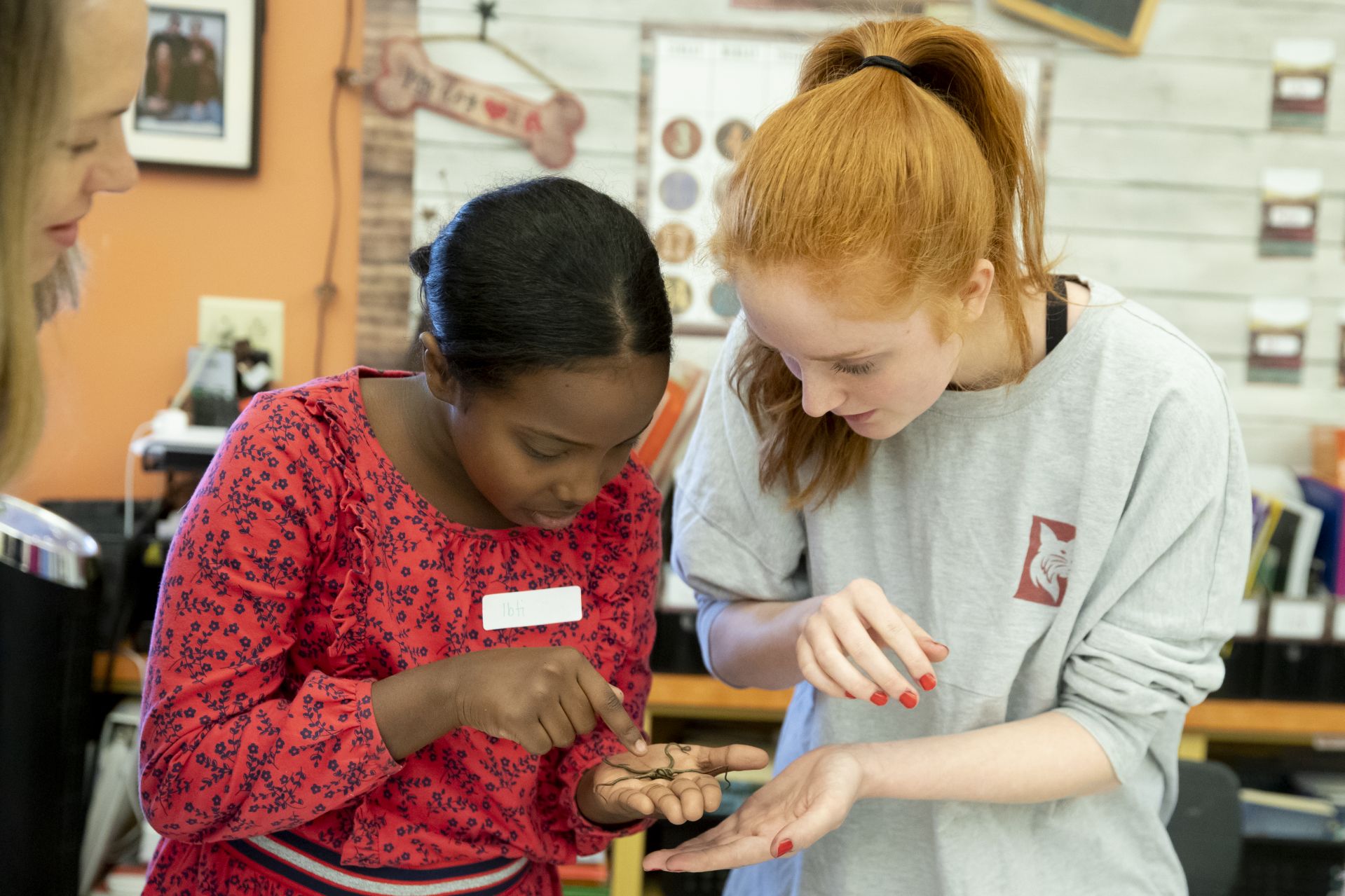 At nearby Geiger Elementary School, Kate Peters ’23 of Nobleboro, Maine, and a fifth-grader scrutinize a brittle star, closely related to a starfish, as Ellen Alcorn, assistant director of community-engaged learning at Bates, looks on. The Geiger students learned about marine life from Peters and other students in a lab-based marine biology course taught by Visiting Assistant Professor of Biology Katie Dobkowski.