Nov. 12 is fast becoming the coldest night of the young school year. By sunset, it’s 24 degrees. The wet snow that fell earlier in the day has iced over, turning parts of campus into a Slip ’N Slide.

Not the best conditions for a bike ride around campus. Yet neither snow nor rain nor icy sidewalks stay the Bobcat Den Delivery team from their appointed rounds: bringing bags of hot french fries and mozzarella sticks to hungry students across campus.

Founded in 2013 by Matt Perejda ’14, Bobcat Den Delivery is a student-run food delivery service. As evidenced by its loyal customers, who altogether place around 20 orders per night every Sunday through Thursday, it’s one of the most beloved institutions on campus, perhaps second only to the Den itself. 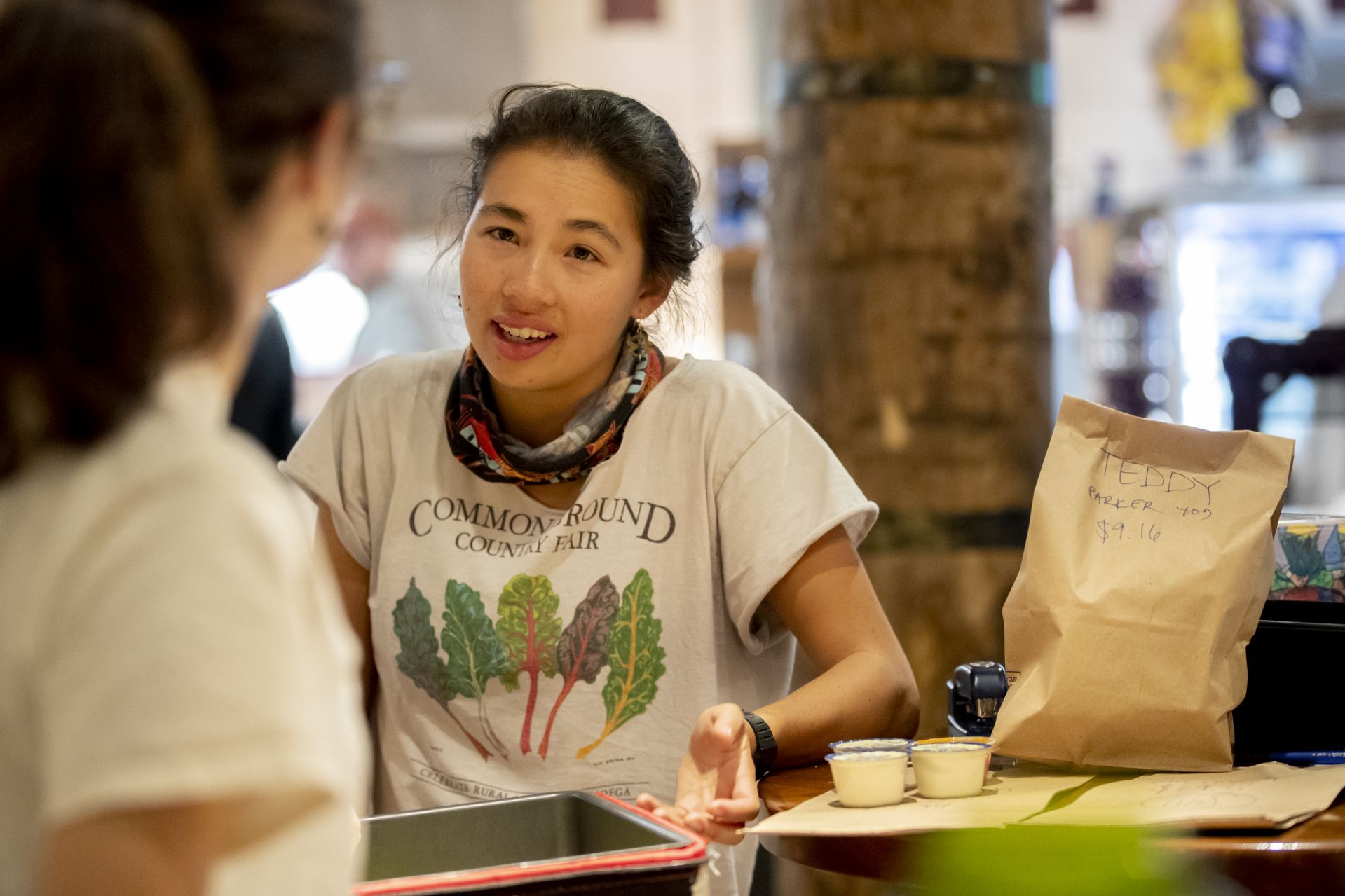 With Grace Warder ’20 of New York, N.Y., as the company’s current owner/operator, Den Delivery is a staple for many a hungry student craving Den food during late-night study sessions, TV watch parties, or simply to round out their evening meal — perhaps with mozzarella sticks and a milkshake.

By 9 p.m. sharp (by now it’s 15 degrees), the night’s BDD workers have set up shop in the Den at the table closest to where Den workers hand over finished food orders.

Sitting next to Warder are Olivia Kranefuss ’22 of Madison, N.J., and Moud Yousry ’20 of Cairo, who are watching their laptops for new orders to appear on a Google Doc that’s the temporary replacement for their delivery app (more on that later!).

The three are among the 21 students on the BDD roster. While Kranefuss and Yousry both work at least once a week, other employees work more sporadically, sometimes every other week. 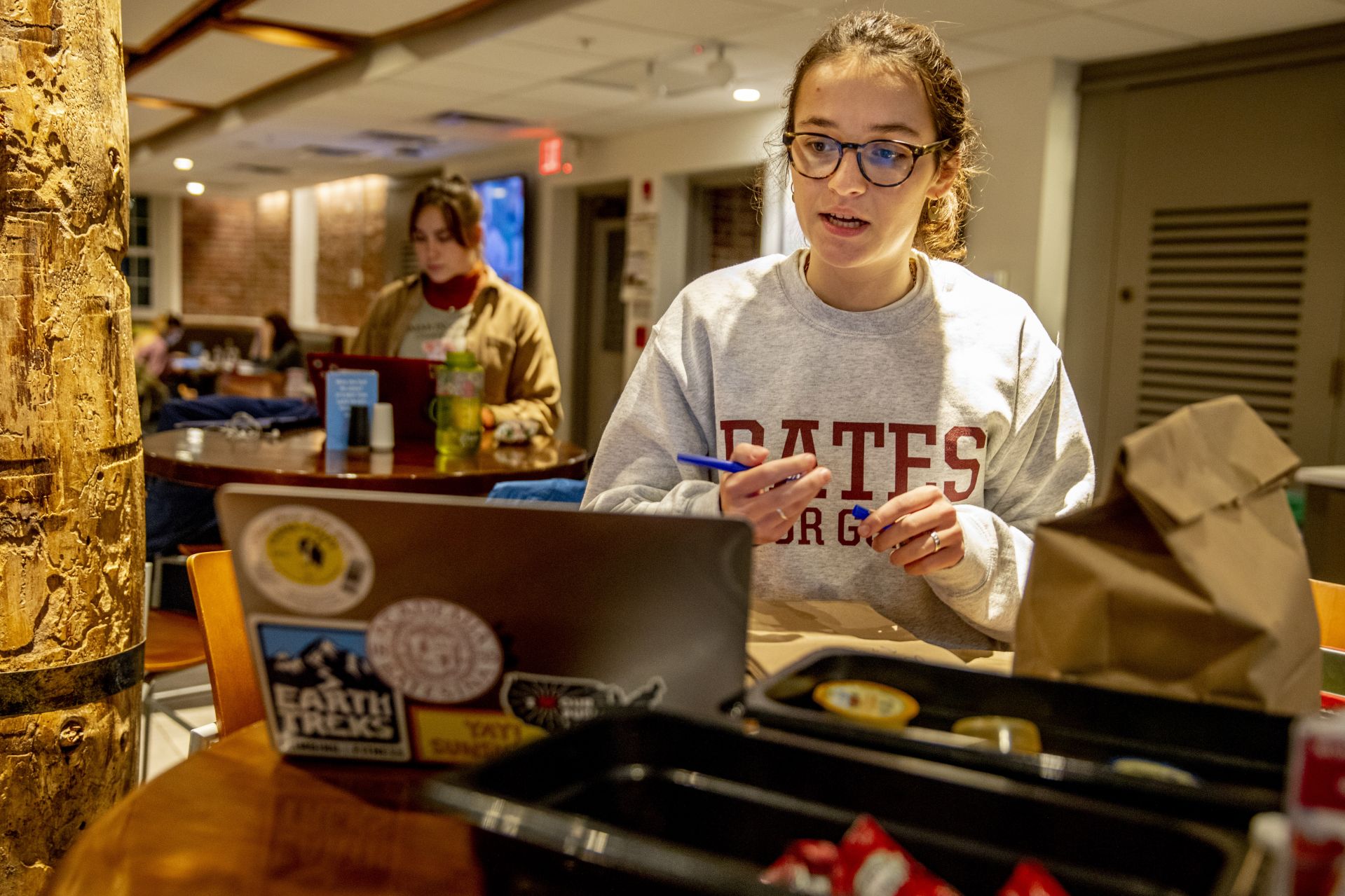 Kranefuss and Yousry both like the job for the social aspect. “If your friends don’t know that you work, it’s fun to surprise them at the door,” says Kranefuss, a new BDD employee. “Seeing people throughout the night is really fun.”

This is Yousry’s sixth semester with BDD. As a former Den cook, he enjoys the chance to hang out with Den staff on the job. “I’ve created relationships with a lot of them,” he says. “It’s also fun to see new faces every shift and see where people live and what they’re up to.”

About 10 minutes after 9 p.m., the first of many orders comes in. Yousry takes this one, placing an order at the counter under the name “Bobcat,” which signifies the order is in fact for BDD (as opposed to any other Bobcat). 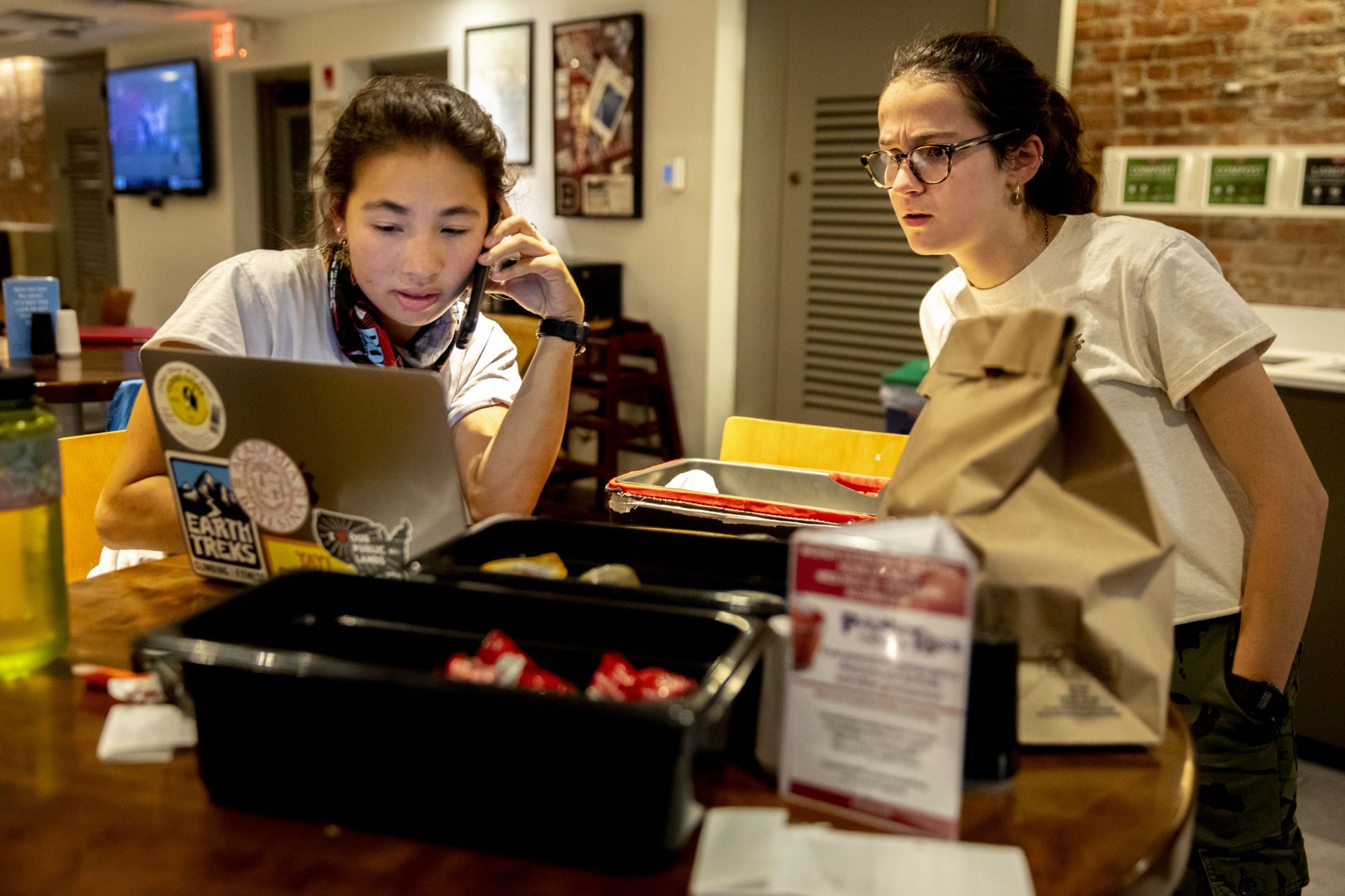 On a busy night like this, he waits for three or four orders to come in before stapling them in brown paper bags which he loads onto the Den Delivery bicycle. After throwing on a winter jacket, he’s off into the night, en route to the first of many deliveries.

It’s dropped another 2 degrees, but the Den deliverers know how to prepare for the cold. “We all wear Buffs,” says Kranefuss, referencing the brand of multifunctional headwear that can be worn around the head or neck as an extra cozy layer.

“When you’re biking, your body tends to heat up pretty quickly,” adds Kranefuss. She isn’t particularly fazed by the weather, despite this being her first semester on the job. 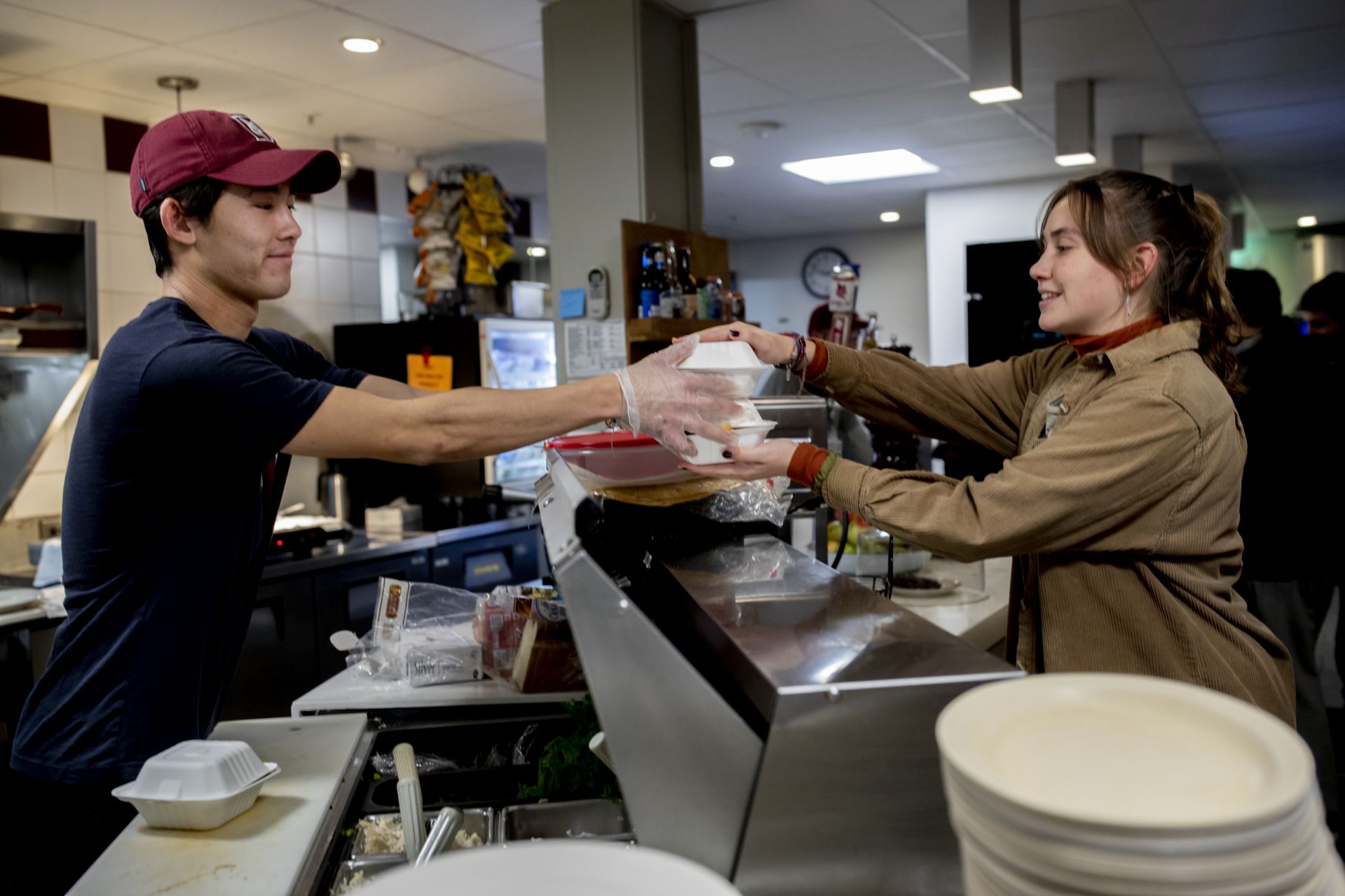 As the 2019–20 BDD owner/operator, Warder is in charge of the business side of things. BDD is a limited liability company, or LLC. “We’re a company recognized nationally and by the state. So we pay state taxes, we pay federal taxes,” she says.

Now in its seventh year, the BDD’s sustainability gratifies Perejda, its founder. “There are so many failed and struggling concerns in the food delivery space,” he notes. “But BDD has endured and thrived because it’s by the students and for the students. There is a real connection to the Bates community and the Bobcat Den.”

The BDD is structured so that each year’s owner/operator selects and trains their successor. What has proven key to the business’s ongoing success, Perejda says, is that each owner/operator has full control — “skin in the game,” as he puts it. “For the business to continue to thrive, someone must always bear the full burden of ownership — and the full reward that comes with it, too.” 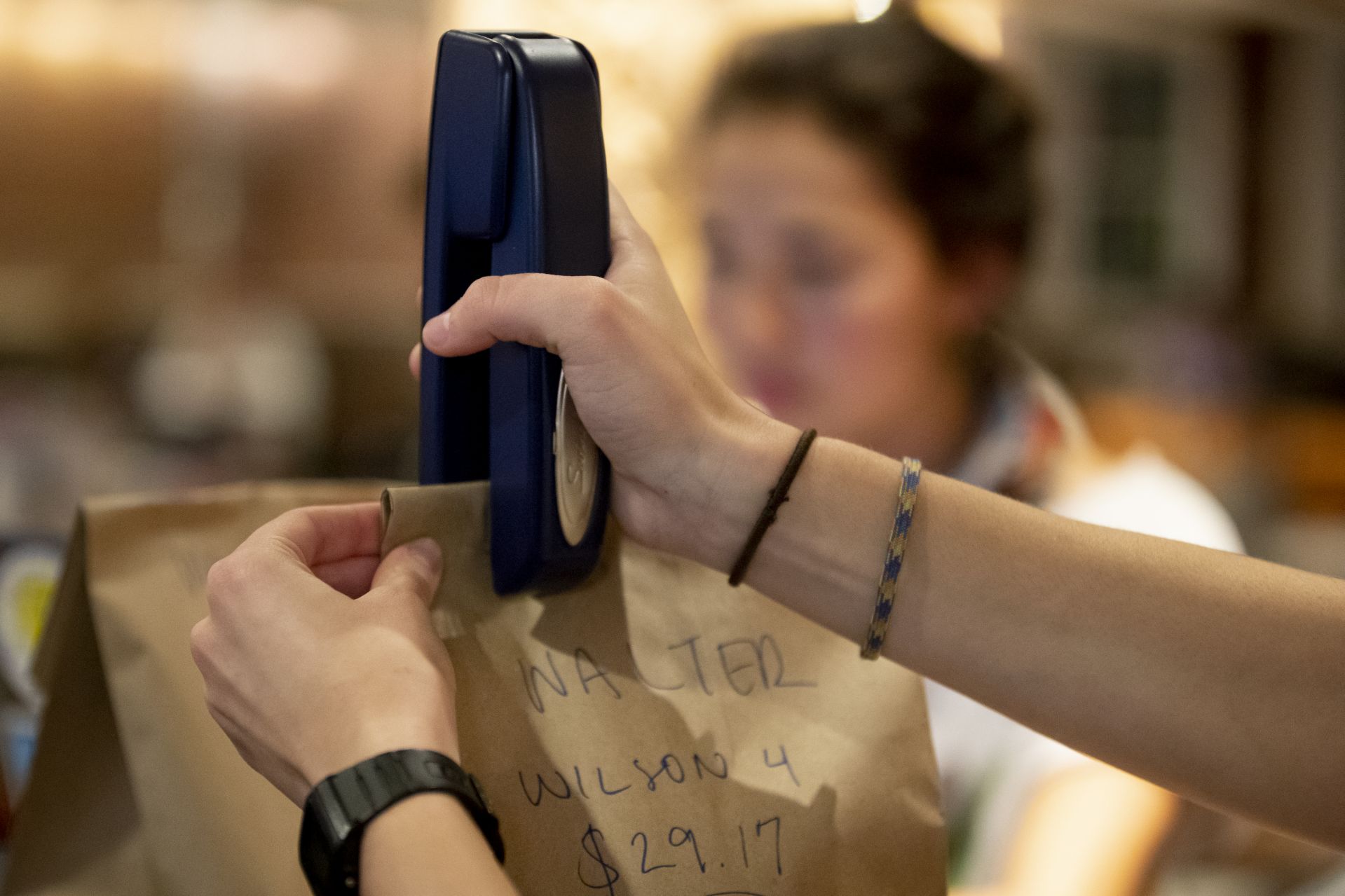 Managing a small business might seem daunting, especially on top of being a full-time student, but Warder appreciates the experience it’s given her. “It’s definitely worth it, and it’s the only place that I can really do this. Plus, it’s fun to work with these guys,” she says.

Much of Warden’s job this year has involved issues with the BDD app. Since an app crash forced BDD to move their ordering system to Google Docs, Warden and the team have been working to create a new app.

With the help of Leo Crossman ’20, who pitched an app idea to Warder and has subsequently spent the past two months designing it, a new BDD app is on the way to the App Store.

“Leo’s been working tirelessly on this for us,” Warder says. 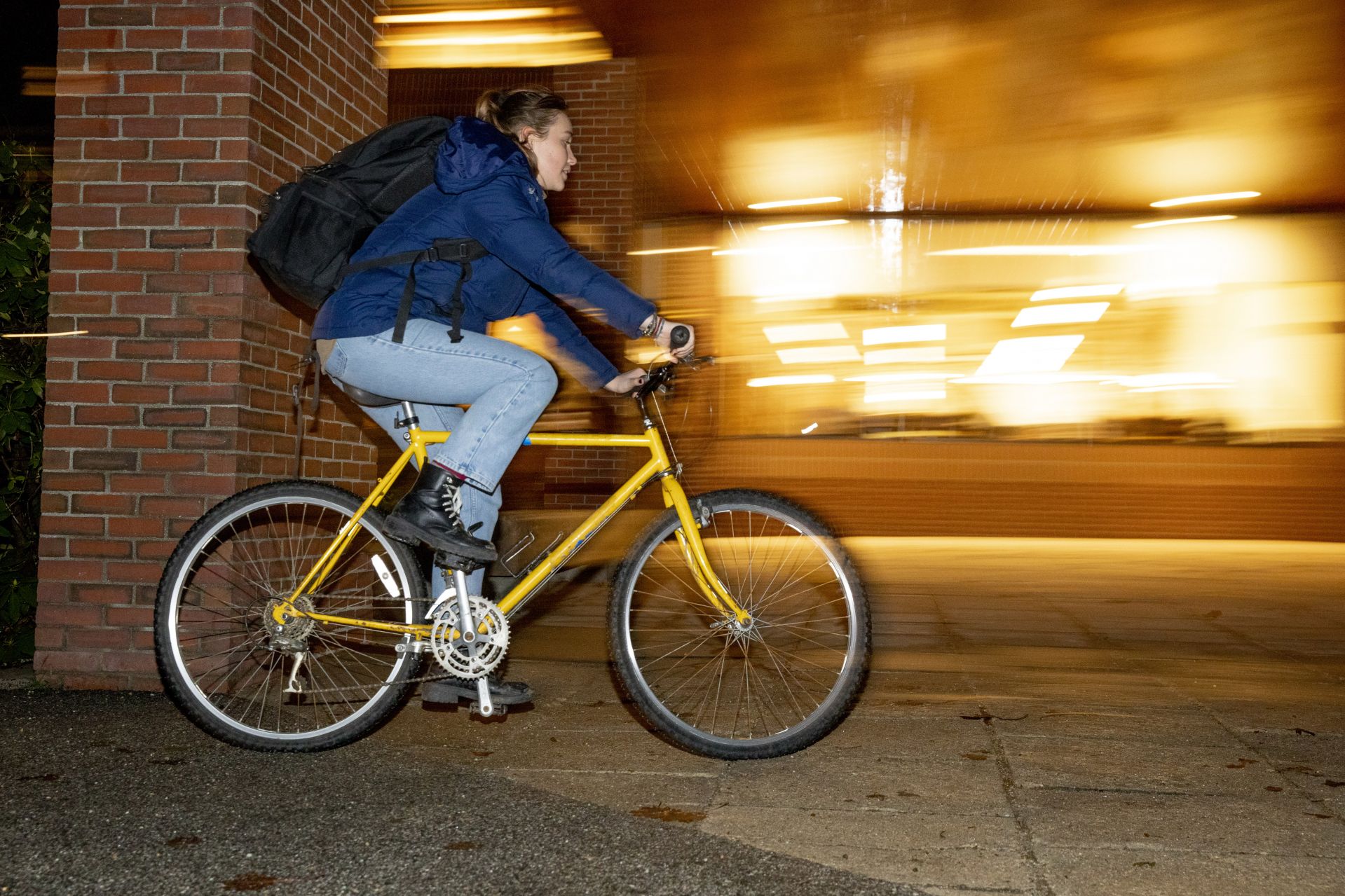 She adds, “You never know what this job is going to throw at you.” But when she’s not working on accounting or helping to submit their new app, Warder enjoys hanging around the Den with the night’s delivery crew.

“We all work so hard on it and it is student-run, so everybody cares about it a lot,” she says.

By now — getting close to midnight, BDD’s closing time — it’s down to 10 degrees. But never mind: It’s time for another delivery. As Warder shares her appreciation, the two Den Deliverers agree with her, staple paper bags of food shut, don their Buffs, and get ready to head out into the night.